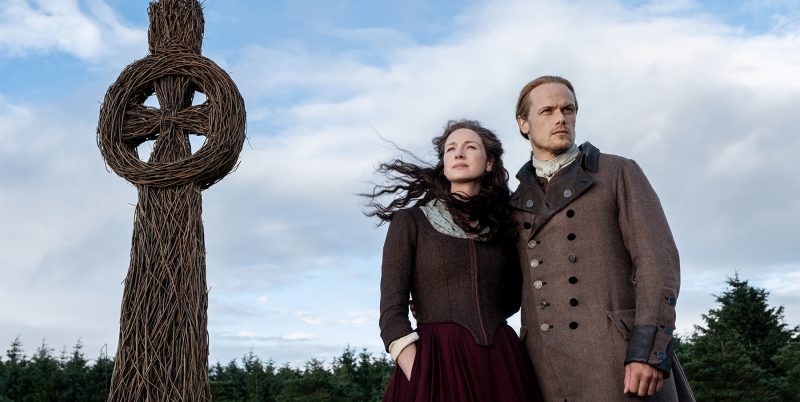 Has everybody let out that sigh of relief? Droughtlander is over – with a fantastic, satisfying episode! I’m happy to say that all the times I’ve seen this one so far (four at last count), I’ve needed tissues. It may not have been what I was completely hoping for (the Gathering section in The Fiery Cross is one of my favorite pieces of all of the books), but it certainly got all of the major story highlights fit in, and brought us skillfully back to the Outlander fold.

A wedding, several love stories, oaths, tongue twisters, and John Quincy Meyers falling over dead drunk – who could ask for more? We can look forward to an exciting season – just with the bits and pieces we got from this episode. And readers recognized clues to many of Book 5’s stories. If you watched the credits, you saw that several characters appeared in the episode, even if we aren’t sure which ones they were – Arch and Murdina Bug, Duncan Innes and Ronnie Sinclair were named, and the Bugs in particular are important to Book 5 and beyond. Isaiah Morton and Jo Beardsley were a little easier to pick out. With any luck this means we’ll see their frankly lighter-hearted stories throughout the season!

I was very intrigued with how this episode had multiple undercurrents running through it – much of the episode was obvious, on the surface – but the play of what was beneath was just as important as what was above. The continuing threat of Stephen Bonnet and his effect on Brianna; the possibility of Tryon pulling Jamie’s life out from under him; the necessity of loyalty in a dangerous world, all running barely beneath the surface, informing other decisions and pulling at our characters.

Some of my favorite moments:

Happy Is The Bride

This has been Outlander’s third wedding (on screen – even though we know of a few more throughout the series). The first, Jamie and Claire, was under duress, but was the event that most of us tell friends about to get them to watch. The second, Fergus and Marsali, was funny and touching, but brief. And this, Roger and Brianna, was the most beautiful. Despite the fact that an 18th century backwoods bride would never wear white – it just wasn’t practical, and there wouldn’t have been money available to spend on clothing that wouldn’t be worn over and over – it showcased the talents of our new costume designer, Trisha Biggar (for more info, click on this EW article). It was beautiful! Simple and sweet, with lovely embroidery. The quick flashbacks to Jamie and Claire’s vows were beautifully done, and contrasted the emotions of the one – terror and sadness – with the other – joy and love.

Jamie’s love for his recently found daughter, and his reluctance to give her to a man he’s not sure about were so well done! It was incredibly sweet having him do the “something old, something new” ritual for her – with his mother Ellen’s pearls as “the old,” and whisky made on the Ridge for “the new” (although this tradition was probably told to him by Claire and Bree, since it didn’t start until late in the 1800s). 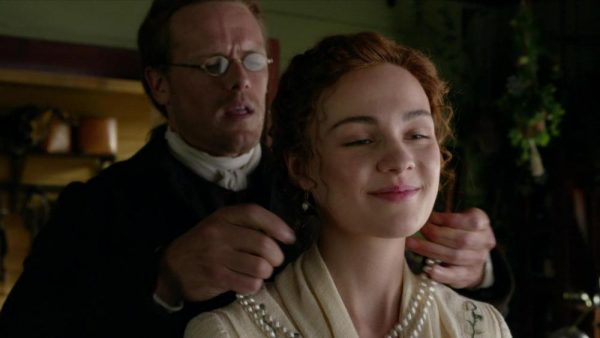 Jamie has his doubts about Roger’s suitability – both for life in the 1700s and as a suitable husband for his daughter. His conversation with Roger while he shaves the groom showed this, but also showed that Jamie was willing to try to accept his daughter’s choice, as long as Roger was willing to work to be worthy. 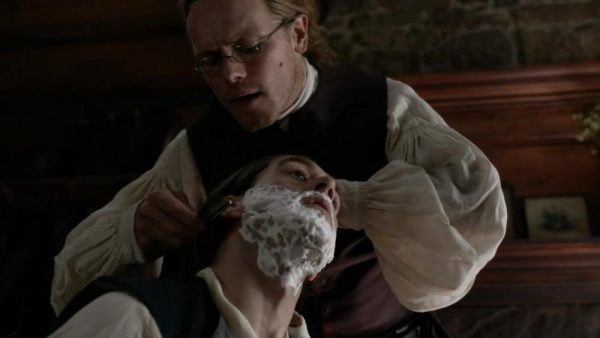 This scene, though, was part of my biggest issue with this episode – and believe me, I didn’t have much trouble with the episode at all. However, the timeline is all screwed up – when does this wedding take place, that the big house, not even started before Jamie and Claire left to find Roger, is nearly finished, and SO well put together, but Roger hasn’t been there long enough to learn to use a straight razor? And Jemmy is still an infant?

Jocasta proved herself to be a Mackenzie, equal in deviousness to her brothers Colum and Dougal, when she tells Roger that she’s changed her will to leave everything to Jemmy, since she understands that “Protestants are prone to divorce,” and if Roger “can’t love the lad for himself, at least love him for his prospects.” Canny old bird, she knows nothing will get under his skin more, and she’s right – Roger tells her, “Let me put this very plainly – I do not want your money, my wife does not want your money and my son will not have it. Cram it up your hole, aye?” And as he rushes off, bound and determined to declare Jemmy as his own son, and “love him for himself,” Jocasta laughs that her plan has come off even better than she expected. 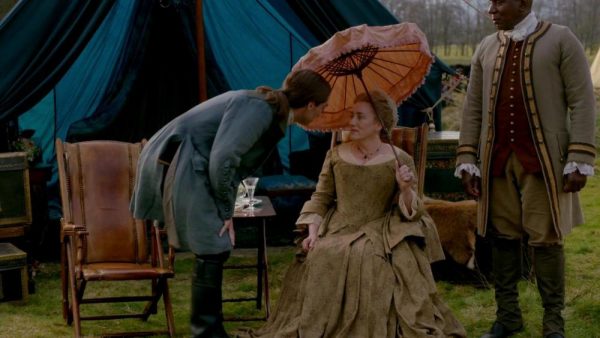 I have not been a big Murcasta fan –  not that I dislike the relationship, it’s just that, while it’s sweet, I’ve found it a bit unnecessary. Tonight, though, it broke my heart just a little bit – here’s this man who has lived his life as a warrior, protector, loner, and not a lover, who has fallen for a woman from his distant past. For her, for just a moment, he creates a bit of a fantasy, a tryst in “an enchanted woodland palace built by the kindly wood nymphs that live hereabouts.” And the light of morning, Jocasta asks him where they stand, knowing he’s on the wrong side of the law. “In another life, you and I might have have more time. Perhaps if I was a different man… but I know what life is. Ye canna change a man, ye can only change his circumstances.” 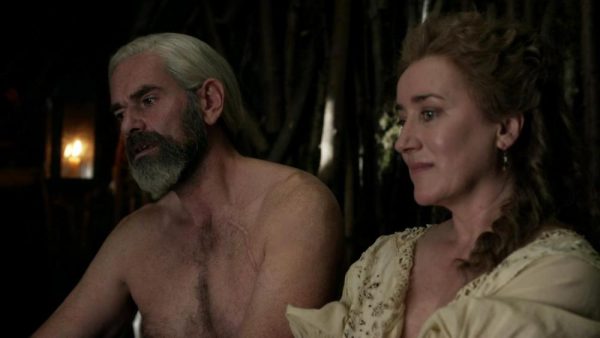 Jocasta tells him, reluctantly, that her circumstances are about to change – a man Murtagh and Jamie know from Ardsmuir, Duncan Innes, has proposed. Their idyll can’t continue, due to Murtagh’s fugitive status, and his answer to her isn’t the one either of them want to give or to hear – “I won’t stand in the way of your happiness.” Neither of them will have the happiness they deserve, and it’s just a bit sad. (For book readers, we’ve been wondering if Duncan Innes will come into play… according to the credits, he was in this episode, played by Alastair Findlay, but we have yet to recognize him.)

… And The Guardian Angel

But Murtagh’s biggest role in his life has been as Jamie’s guardian, from the time the younger man was born. Bookending the episode was the story of this unique relationship – its beginning and ending. Murtagh vowed to Jamie’s mother that he would “follow you always, and guard your back, do your bidding when you became a man grown and needing such service. She’s gone now, but I’ll always be with ye. Always.” 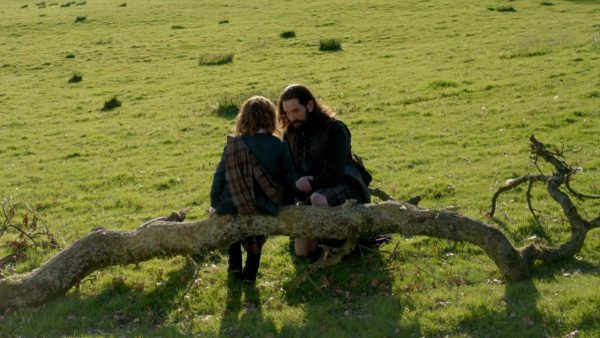 We know he wasn’t able to do that for a long stretch of their lives, through no fault of his own (although…. as Jenny told Claire, “family writes letters”), but they’ve been reunited for such a short time! Murtagh’s experience at the hands of the English have shaped his beliefs, and led him to the Regulators – and Jamie’s experience has, reluctantly, led him to Tryon. Who expects him to hunt down and kill the one man in the world that he can’t do that to. And so, Jamie releases Murtagh from Ellen’s vow – another heartbreak in Murtagh’s life. 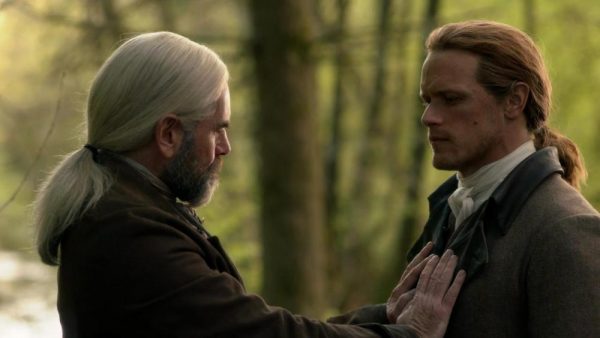 (A side note – as Jamie was not the oldest boy in his family, was there a similar guardian for Willie, Jamie’s older brother?)

Rise of the Chief

Tryon’s insistence that Jamie kill Murtagh, “by rope or by ball, I care not which,” and bring his body to hang in New Bern, or forfeit the land and life that the Frasers have built, has pushed Jamie to a place he truly doesn’t want to go. Knowing that an actual war is coming, as opposed to this unknown battle, Jamie has tried to put off having to get involved in this, but the time has come. So while he has everyone gathered, he uses the opportunity to bring the men together, to once again try to keep his men safe while fighting for a cause he doesn’t believe in, under a man he can’t support. But desperate times, etc…. and so he lights the intricate cross (actually built by Sam Heughan’s uncle, who also constructed the twig stag in season 4) to call the Fraser’s Ridge settlers in an ancient way.

In the Highlands when a Chieftain sets himself to war, he’ll burn the fiery cross, sending a sign through it to the lands of his clan, as a call for his men to gather their weapons. Come, prepare for battle. We are friends, neighbors, countrymen. We are not a clan. I am not your chief. But I hope when the time comes, that you will all stand by my side. We canna say what might befall us, but we must not be only willing to make oaths to our wives and loved ones, but to our brothers in arms, and to this new country. 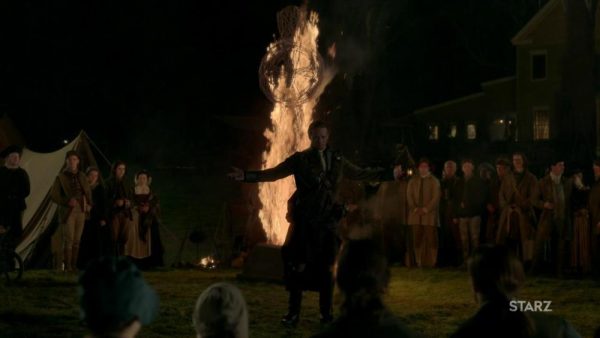 And he intends to first call Roger, “son of my house” – but Roger is dumbfounded by the enormity of what is being asked. After all, he doesn’t expect to stay – shortly after the wedding ceremony, he says to Brianna, “when we go back and do it all over again, I’ll be a little more prepared.” And I’d think that as a historian, the import of the night, the old calling is something he never thought he’d see. And so he stares in confusion, rather than take the steps forward. Good for Isaiah Morton, a younger settler, who steps up to be first in line. Roger’s hesitation, however, can’t help Jamie’s view of his worth – but his wholehearted acceptance once he gets what’s required of him, and his total recall of the oath he’s heard just once, have to go a long way toward moving Jamie’s view forward. 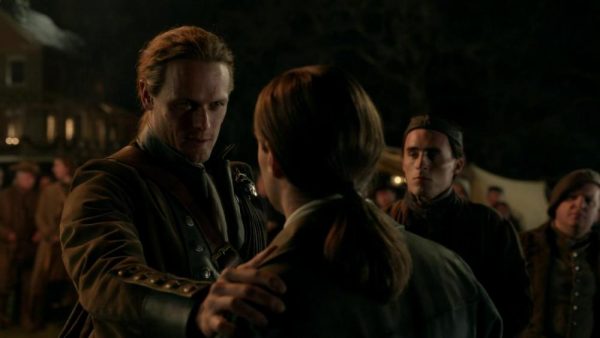 Quick note from composer Bear McCreary – what did you think of the vocals you heard toward the end? I’ve loved Griogair’s music throughout the series. 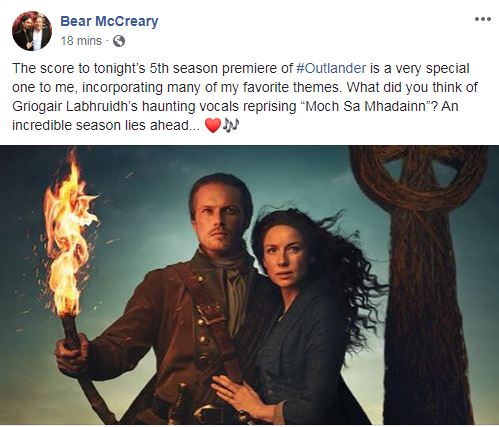 We’re just at the beginning of a season that’s sure to fly by. Book 5 has so much in it, and I’m really looking forward to seeing what Matt Roberts and company put together. Join us each week for our internet radio show, the Outlander Gab, on Tuesday nights at 9 pm eastern (click on the live radio tab above for the most recent link or to listen to replays).

And watch in the next day or so for my coverage from the LA premiere- video interviews with Sam, Caitriona, Duncan, Matt, Maril, Ron, and more!

Join us at our Facebook group, Outlandishly Three If By Space!