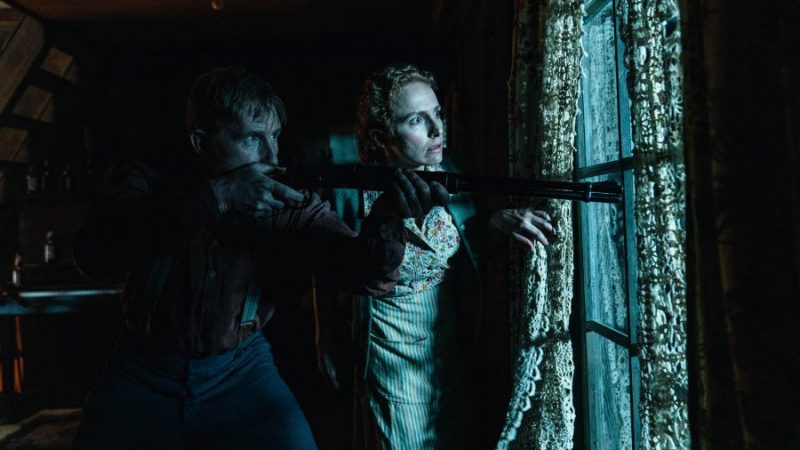 Well that answers that question. It would appear that all roads do, indeed, lead to Hopkinsville, Kentucky – at least they did in episode 204 of Project Blue Book, titled simply, “Hopkinsville.” We’ve got alien craft in the air, aliens on the ground, a suspect hand print on a tree and a lying circus-runner named Jimmy Jay Shoemaker who was kind enough to bring everyone together – kind of.

As is usually the case, a late night phone call sends Captain Quinn and Dr. Hynek off to investigate a sighting of both alien craft and aliens on the ground, claims that would be proven to be unfounded as the investigation unfolds. But the trip to the truth is a fun jaunt in episode 204 and there are plenty of interesting tidbits dropped hither and yon to keep us wondering what’s next in the never-ending search for “the truth.”

But be forewarned, there are SPOILERS coming. So, if you’re not up to speed on episode 4, don’t travel this path. I don’t want SPOILERS to ruin the fun for you. If you’re okay, then proceed. 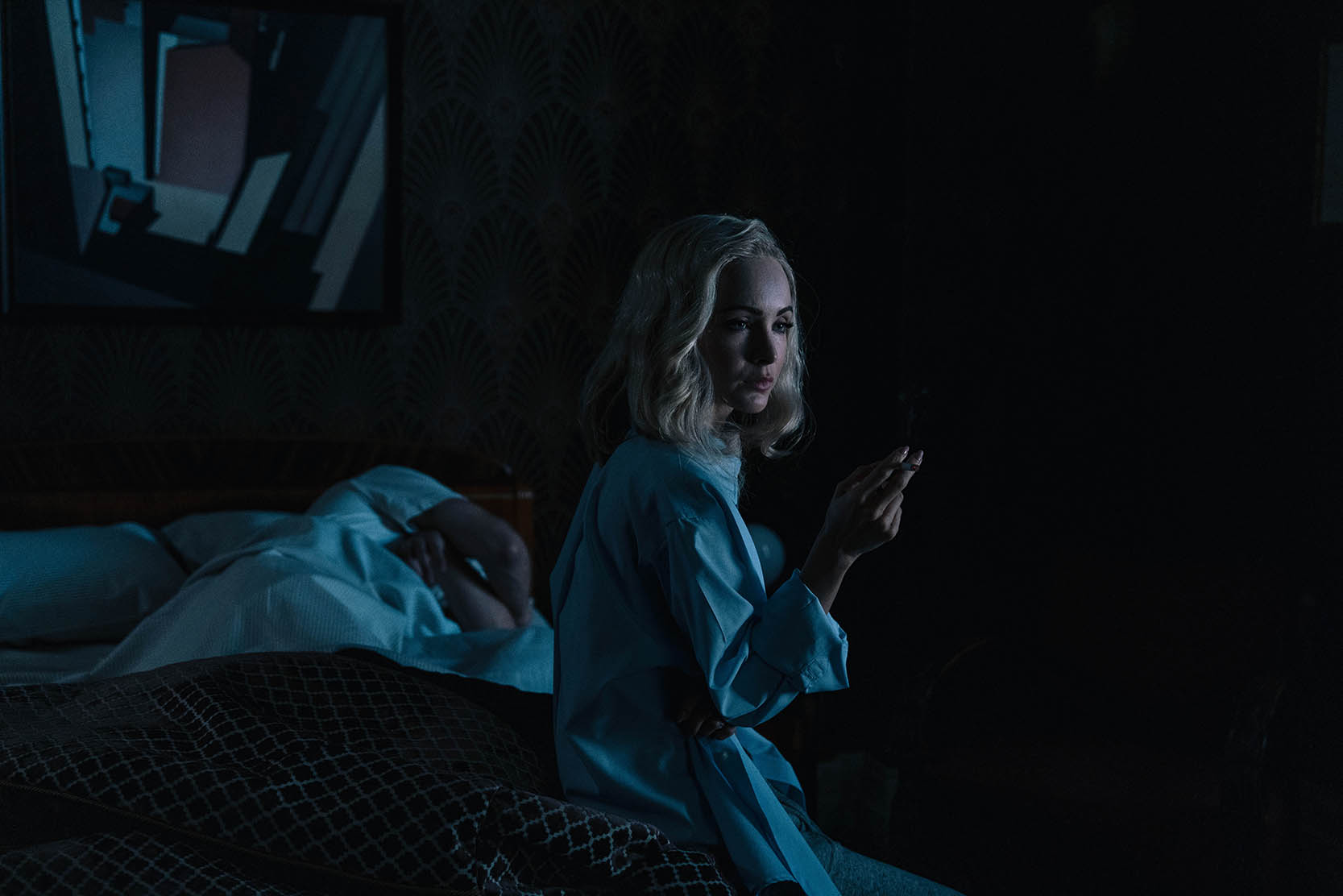 As I sit here and reflect on the multi-faceted scam that Jimmy Jay was trying to play, and the burgeoning CIA-Air Force donnybrook that may or may not occur, I have to digress a bit and focus on the tenacity of the women that I adore in Project Blue Book. First of all, Susie Miller, erstwhile Soviet operative, is one badass woman. She fails to deliver Capt. Quinn for kidnapping and that puts her in “Dutch” with her Soviet handlers. And they aren’t a forgiving lot.

In short order she is smacked around, a sack put over her head, and taken by her handler’s henchmen. The gang drives out to a wooded area where a makeshift grave is prepared. Susie is promptly told that’s she’s failed and that her daughter (yes, she’s hiding a daughter from these folks) will eventually be found, recruited and turned into a better version of herself. Ksenio Solo embues Susie with such a strong will, but with this underlying tenderness and uncertainty about what she does that has grown nicely in season 2. The relationship with Quinn has kind of pushed her into an area that her training hadn’t quite successfully purged. She likes him – a lot.

I’d like to think that as that shovel crashed down on her head, and the dirt was spread over her lifeless (but not quite) body, the feelings for Quinn, and a nice bit of tenacity, helped keep her alive long enough to emerge from the dirt to reclaim her life. Yes, Susie Miller emerged from the grave alive – dirty and hurt – but alive. A big stick across the head of a Soviet operative, a quick back-and-forth over the body with the car, and she’s off to square things with her handler. Of course when I say square things, I mean stick a gun in her gut and tell her that she’ll kill a Soviet agent who has turned in exchange for being left alone – permanently. 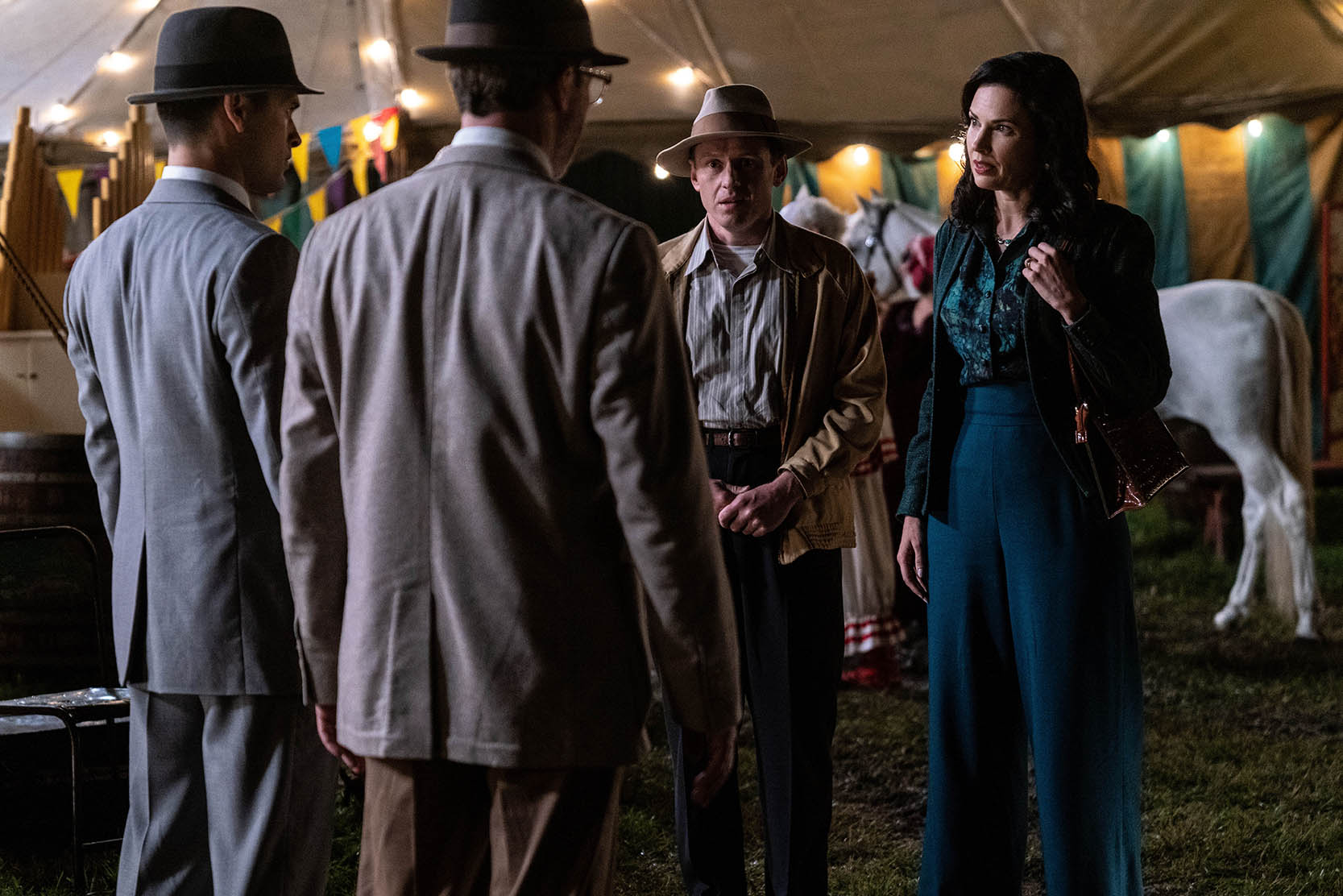 The entire arc is kind of this “Susie as a whole” run. We see the tenderness, toughness, tenacity, uncertainty, and overall ability of Susie that is both a little scary and wonderfully exciting. I Love this character and hope that her path to the good side will continue. It’s obvious that the Quinn factor has helped her find that tender spot she’d probably forgotten she had. Susie is quite something – on many levels. I appreciate her “attributes” quite a lot. She’s the total package, in my eyes. I may have a crush on her. Just sayin’.

But she’s not the only lady that has started to really find herself. Mimi Hynek is now a legitimate, full-on UFO connoisseur. She’s fully engaged in the UFO group that she’s part of, but suffered a bit of exposure to the paranoia the group has when she was trying to explain things about her husband’s work only to be shut down. It always comes back to ‘cover up’ with this group, doesn’t it? I was not happy and I could tell that, perhaps, just meeting with a UFO group wasn’t satisfying enough.

She’s not content to simply talk about it or type up her husband’s notes anymore, something you could see coming almost from the instant Dr. Hynek started to more fully include her. She wants…she needs more. And that’s been fun to watch mature within her.

Much like Susie Miller, Mimi is resourceful, strong-minded, and tough in her own way. And she’s a pretty capable liar as noted by the Ringling Bros. fib she told later to Jimmy Jay. Laura Mennell does a great job delivering a Mimi Hynek that is believable and evolving – and she really digs this UFO stuff. I mean, on some levels I think her zeal for getting at the truth may outpace her husband’s. Let’s face it, Dr. Hynek is somewhat limited by his view through the strictly scientific lens. 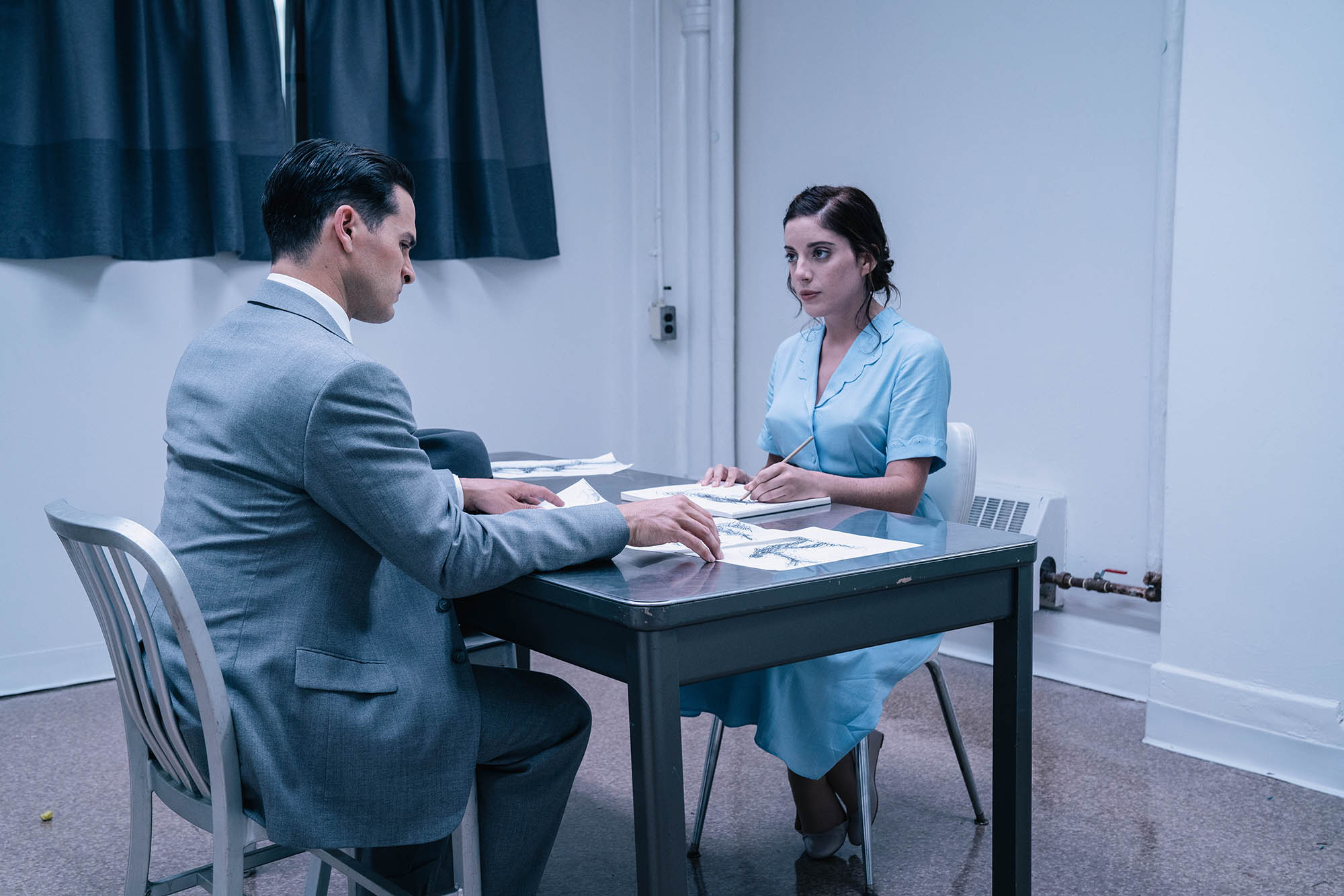 His wife is not hindered by that. She’s a committed and passionate soul and it’s clear her husband has kind of lit a fuse of curiosity within her. It’s fun to see her really come into her own as she injects herself into the situation. She leaves me a bit gobsmacked, to be honest. I may be crushing on her, too. Yikes!

And inject herself she does down to Hopkinsville. That’s right, a call from her husband piques her curiosity in a very titillating way and before you know it, you’ve got her hauling Evan onto the road and down to Hopkinsville, where she eventually meets her husband at the cheapo circus (Painting the donkey as a zebra…priceless) and helps shed light on the Jimmy Jay racket. You know, monkeys in space suits, green glaze paint, special suits, etc. He’s got quite a little gambit going. I liked him Jimmy Jay just ‘this’ much.

So, as we move forward to Hopkinsville, we’ve got Mimi, Evan, Quinn, Dr. Hynek, the Air Force, CIA and a host of others descending on this little Kentucky town. The Air Force’s General Harding and General Valentine decided to fire their first UFO salvo at the CIA right here in Hopkinsville. But wait, there’s more. Turns out that the CIA’s Daniel Banks is back on the scene. That’s right, everyone eventually shows up in Hopkinsville thanks to the report from Jimmy Jay. It’s ground zero for some interesting machinations. 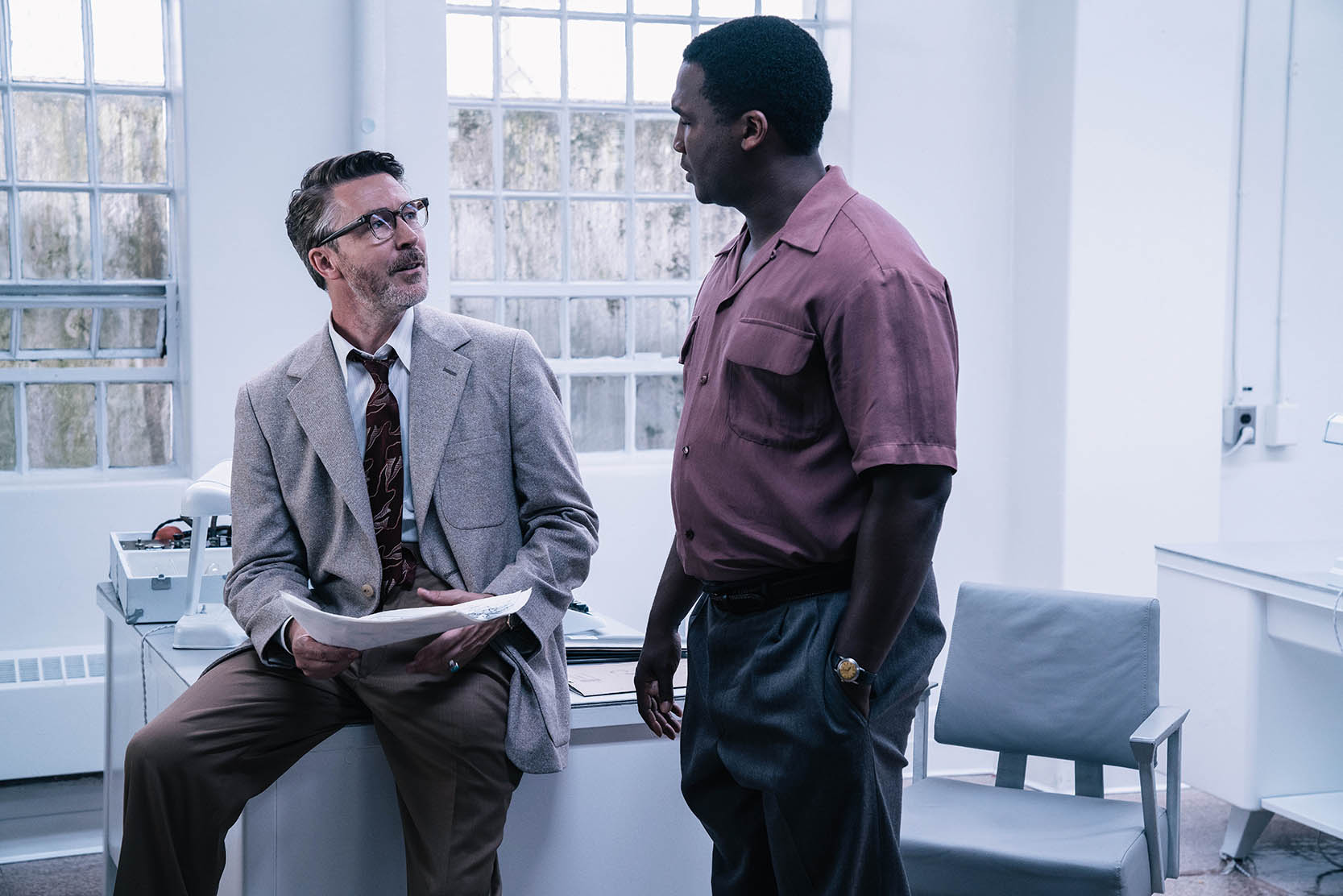 I said it last week and it’s worth repeating, this Banks guy is a very interesting fellow. Not least of which because he’s an African-American operating with intelligence and confidence in 1950s America, a time and place that weren’t really known for their enlightened attitudes toward race. I think Quinn is still trying to deal with Banks’ intent and we get another fun scene at the end when Banks is waiting for generals Harding and Valentine in their office to deliver a message – the CIA knows what these two are up to and would prefer to avoid an ugly inter-agency war.

Valentine is suspicious and Harding is downright pugnacious to their office guest. You get the feeling that they didn’t like Banks partly because of his CIA affiliation and partly because of his skin color and brazen lack of care about any line they may feel he crossed. I like this Banks character and while I trust him to a point, I don’t totally believe his mission in working with Hynek and Quinn is all about “truth.” We shall see what his intentions are truly about as this moves on, I’m sure. Remember, he’s about intelligence. It’s the currency the CIA works in.

I enjoy the premise that while the investigation of the sightings proceed, there are these other layers just under the surface that are both part of the original plot, but also building a story arc away from it. There’s always something more lurking just under the surface with Project Blue Book and I find it engaging to try and put pieces together. 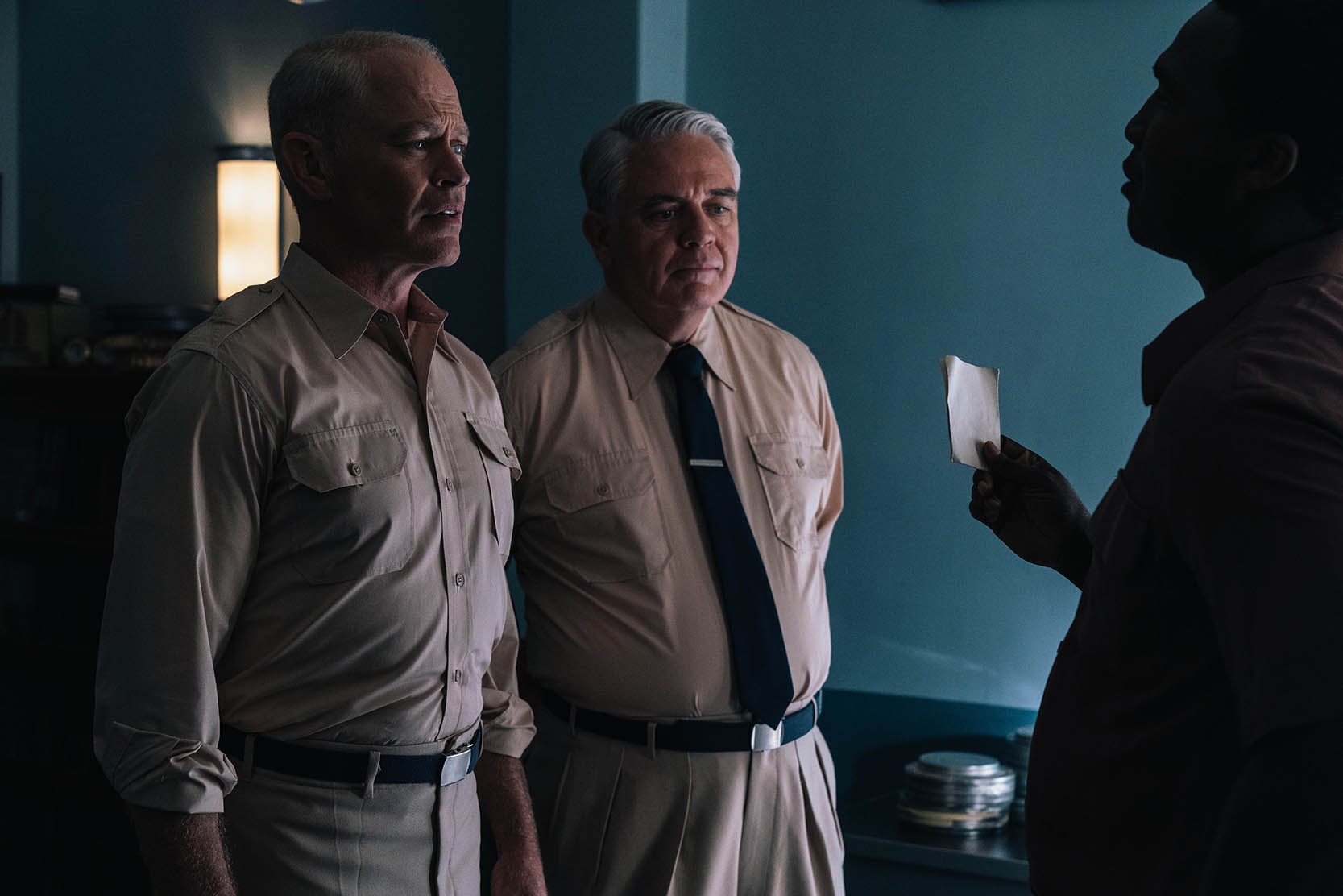 In the end, the Hopkinsville call was simply a circus-type stunt by a Kentucky man looking for some publicity and money. But, it put a whole stream of things in motion that should be interesting to flesh out. The call that woke Quinn saved him from a kidnapping, but sent Susie on a whirlwind ride that nearly cost her life – but ended up being the means to set herself free. We also found out the depths of the CIA’s interest in all of this, including it pre-cognitive initiative that may be yielding some ESP-loving results.

It also brought the CIA and Air Force face-to-face with all the cards now on the table. I’m very intrigued by Harding and Valentine’s next move and if they decide to play nice with the CIA, which is proving to be a formidable government agency. And again, the emergence of Mimi Hynek as a UFO investigative force was given full bloom in this episode.

How will this impact her marriage, I wonder? Particularly given that her husband came home to an empty house to find a man, a gun and a pistol whipping waiting for him. Who might that man be, I wonder? Is he Russian? Perhaps a CIA operative? Maybe an Air Force enforcer or simply some mystery group that we’ve had glimpses of before in season 1? Whoever it was, he seemed to have some bad intent on his mind.