This spring, Ian & Barley’s quest beginneth in this new trailer for Disney and Pixar’s Onward. Set in a suburban fantasy world, Disney and Pixar’s “Onward” introduces two teenage elf brothers who embark on an extraordinary quest to discover if there is still a little magic left out there. Pixar Animation Studios’ all-new original feature film is directed by Dan Scanlon and produced by Kori Rae—the team behind “Monsters University.” “Onward” releases in theaters on March 6, 2020.

Right from the start of the film, we get a quick history lesson that sets the story up and the state of things. Magic was once a huge part of life until progress and technology took ahold and magic was all but forgotten. The story revolves around a single-parent family: Mom and her two sons Ian and Barley. Their father passed away when Barley was young and Ian never met him. So on Ian’s 16th birthday, his mother gives him and Barley a gift from their father. Its a wizard staff, and a spell that will bring him back for 1 day. So they embark on a journey. 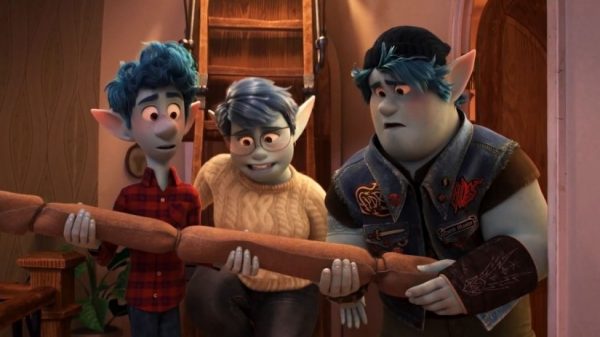 You will notice a lot of references to characters and locations found in the Wizards of The Coast games, like D&D. The story itself is rather unique, which makes for an entertaining journey. While Ian was able to cast the spell, it was incomplete. Only half of their father returned. So Ian creates a dummy top half to disguise him which means we ended up with a weekend at Bernie’s situation with a torsoless pair of legs. Don’t let that fool you into thinking its all just hijinks though.

At the heart of the story is a coming of age for both Ian and Barley. One has never met his father and holds regrets over all the things he hasn’t done with a father. Barley, on the other hand, is a carefree goofball with a secret regret even he won’t tell his brother. The story will pull at your heartstrings. I dare you to walk out with a dry eye towards the end. Pixar and Disney both are known for this but Onward lends itself to a slightly older family crowd without forgetting to entertain even the adults in the room.

The two lead voices of the film Tom Holland (Ian) and Chris Pratt (Barley), are a perfect duo. We saw the interactions they had in Avengers Infinity War. Holland and Pratt have a brotherly feel and banter among them that transcends the writing and the script. You can feel the moments of awkwardness, frustration, and laughter throughout. But our leads are not the only highlights in the character realm either. The manticore is a fun and high strung friend in the journey, and even the trash-unicorns are hilarious to watch.

The journey plays out like a D&D campaign in a lot of ways but it makes for a lot of fun moments throughout the film. Disney and Pixar’s Onward is a must-see endearing story of magic, family, and coming of age. Onward hits theatres on March 6th.

While there's no doubt that Jurassic World: Dominion will be a huge hit, mostly because of the name (and face it, Chris Pratt), I think...

END_OF_DOCUMENT_TOKEN_TO_BE_REPLACED

A Sweet Sentiment Disney/Pixar's newest film Turning Red is an adorable coming-of-age film that pretty much sums up the experience of ...

END_OF_DOCUMENT_TOKEN_TO_BE_REPLACED

The Tomorrow War – A Crunchy Snack of a Film: Review

For the last month, you haven't been able to turn around without banging into an ad for Amazon Prime's new sci-fi action thriller The T...

END_OF_DOCUMENT_TOKEN_TO_BE_REPLACED

Disney Plus has had decent success with its straight-to-streaming launches some for adults and others for families or kids. Luca comes ...

END_OF_DOCUMENT_TOKEN_TO_BE_REPLACED

Toy Story 4 – We’re Not in The Backyard Any More! Super Bowl Ad

I love Toy Story. This was the first movie we took our son to; we've followed Buzz and Woody from Sid's backyard, to Big Al's Toy Barn,...

END_OF_DOCUMENT_TOKEN_TO_BE_REPLACED

They roar! They run! They trample Jeeps, eat people, tear off arms and legs, scare the living daylights out of little girls and  comput...

END_OF_DOCUMENT_TOKEN_TO_BE_REPLACED

Is there a never-ending supply of superheroes in the Marvel universe? Is this too much of a good thing? This May's Avengers: Infinity W...

END_OF_DOCUMENT_TOKEN_TO_BE_REPLACED

Trailer Released for Pratt/Lawrence Film “Passengers” – Get On Board!

Sony's got a bit of a sleeper on its hands, I think. Passengers, a film set for release just before Christmas, is the biggest star/leas...

END_OF_DOCUMENT_TOKEN_TO_BE_REPLACED

So guys, after the first spate of movies proved beyond a shadow of a doubt that it's a really bad idea to make a theme park filled with...

END_OF_DOCUMENT_TOKEN_TO_BE_REPLACED

Monsters University – Gets A New UK Trailer, Website, and Message From the Dean

Until just recently about all we've gotten from Disney/Pixar surrounding Monsters University, the prequel to Monsters, Inc., was a ...

END_OF_DOCUMENT_TOKEN_TO_BE_REPLACED

Anybody that knows me knows I'm a huge fan of animated features and especially Pixar films.  I'm remember way back when Luxo Jr. wa...

END_OF_DOCUMENT_TOKEN_TO_BE_REPLACED

It's been over 10 years since Monsters, Inc. hit movie screens.  Wow, has it really been that long?  Well, we're finally getting a ...