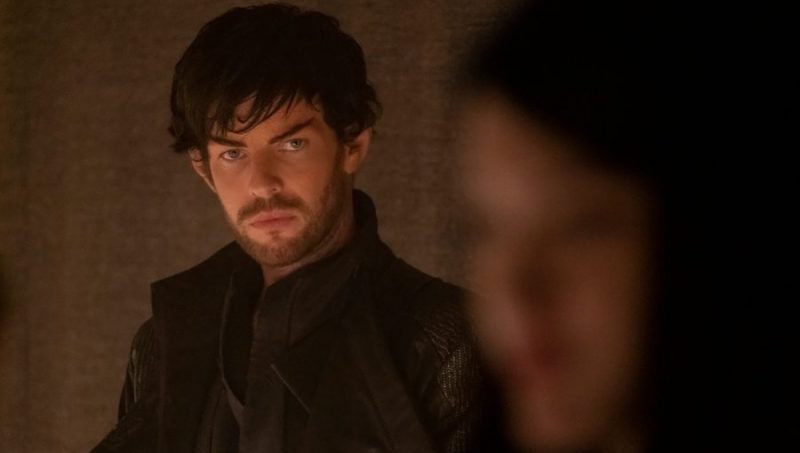 As Star Trek: Picard has ramped up, I’ve been very interested to see what would happen when Jean-Luc Picard made his inevitable way to the ‘artifact’ – the reclaimed Borg cube. In episode 106, titled “The Impossible Box,” that moment, at last, has arrived – and I enjoyed how it played out.

Yes, yes, the mission was to find and save Soji from the Zhat Vash/Tal Shiar and all that, but after running into Seven of Nine in the last episode and the moment of reflection that both she and Picard had regarding their humanity, I kept wondering what a return to a Borg cube would do for the man once assimilated and known as Locutus of Borg. In the words of Mr. Spock – fascinating.

But before you travel any further, be warned that SPOILERS are ahead. So, this is your official SPOILER ALERT. If you haven’t seen episode 106 and don’t want to be SPOILED, stop right now. If you’re good, then let’s talk about this episode. 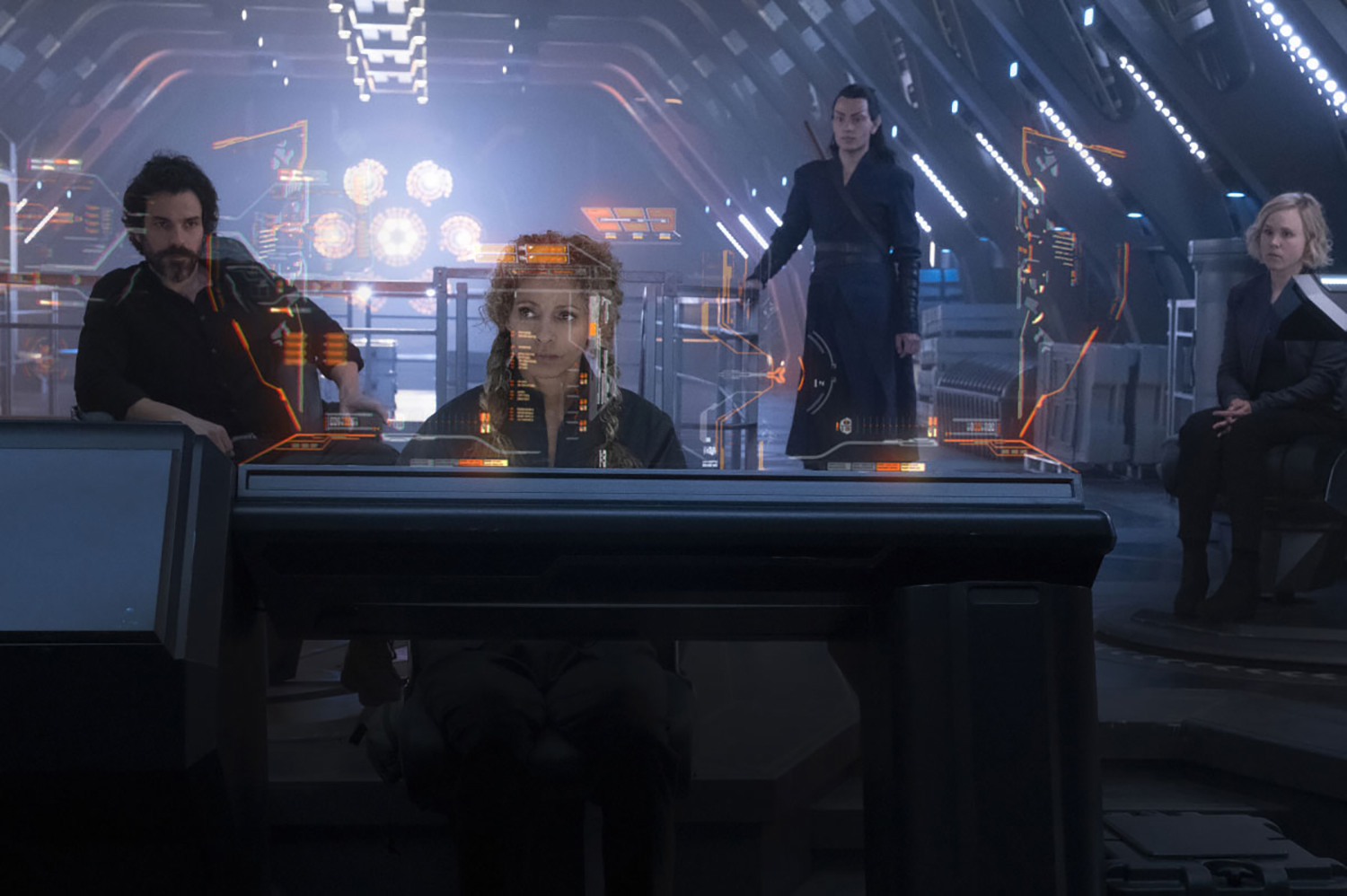 Captain Rios, Raffi, Elnor and Dr. Jurati wait while Picard is on the Borg Cube in episode 106 of Star Trek: Picard.

With the information Bruce Maddox had given before his untimely death (What is your game, Dr. Jurati?) and some nice negotiating for envoy credentials by Raffi, Picard is once again faced with some very unpleasant memories as he approaches and then boards the Borg cube. The flashbacks come quickly and nearly bring him to his knees as the intensity and anguish continue to flood his senses.

The experience with the Borg is still very much a part of his psyche and the arrival on the cube really triggers things. One can only imagine the trauma that he has kept buried all these years since his assimilation. The tortured soul within him screaming to be released. It’s that memory, that experience that makes him extremely sympathetic to the work of Borg reclamation that Hugh is doing on the cube.

Yes, Hugh returns and becomes a key component of the inevitable escape that must take place. A lot of things start to fall into place in this episode as Narek pushes the right buttons to get Soji thinking, then discovering, that all she knows is only about three years old. While Narek is putting the final pieces into place in his little gambit, Picard and Hugh begin the process of trying to track Soji down. As an aside, the “impossible box” not only refers to the Borg cube, but a puzzle box that Narek has – and eventually uses to go in for the kill.

It’s interesting to note that Hugh sensed something was wrong and had his suspicions about the “dashing” Narek from the time he showed up. It’s also clear that he has great affection for Picard and wants to help in anyway he can. I was also gratified to see how much Hugh cares for those Borg being reclaimed and knows that Picard can understand the process and what they are about to undergo themselves. The road ahead for them is arduous at best. 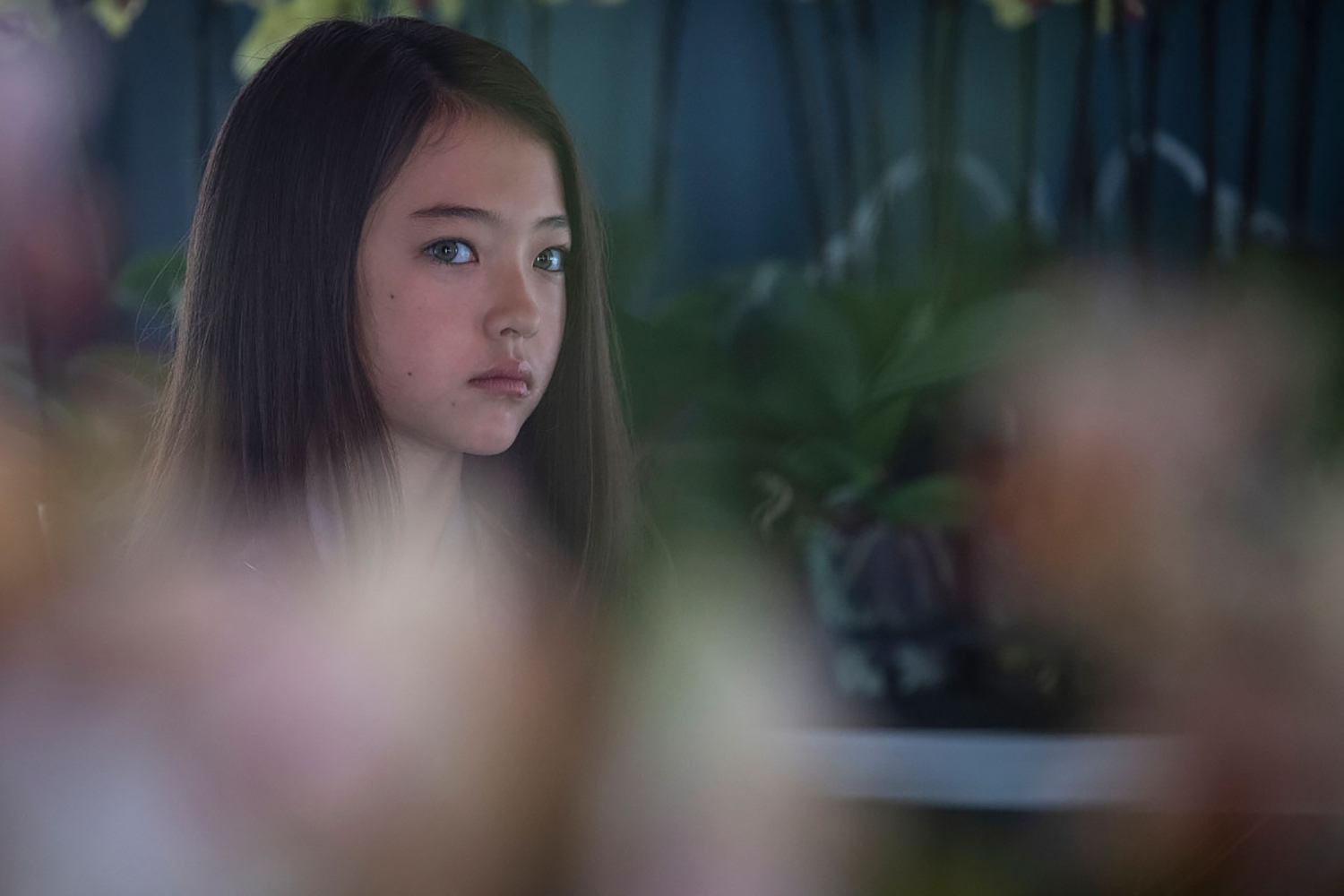 Young Soji in her father’s lab in episode 106 of Star Trek: Picard.

Hugh makes a great point in noting that the reclaimed Borg are the most hated entities in the galaxy and that even though freed of the Borg collective, they are still slaves and outcasts, only now with a Romulan queen. It’s a sad statement on the status of this project, one that Picard empathizes with. As they walk through the reclamation area, Hugh tosses out an idea about Picard eventually speaking out for a free Borg. A reminder that freedom for those who aren’t free is the ultimate prize. I think Picard was certainly sympathetic to that idea and given his current relationship with the Federation, I can see him doing just that down the road.

In the end, Narek both cared deeply for Soji and was committed to his job. Apparently, the Tal Shiar believe that Soji (and Dahj) are part of a greater “collective” of synthetics. As we sit here, our information is that Maddox made only two, and with the purpose of discovering what the synth ban was really all about. From the Romulan perspective, it would seem they believe Soji and Dahj are the first of many that are somewhere out there. They want the nest.

At first blush, my feeling is the Romulans are running a fairly ignorant campaign of paranoia to think that there’s more than these two. However, what if there is a lair of Synths out there? Perhaps not all created by Maddox, but maybe left over, in storage. Just waiting? Interesting hypothesis to think about and one that maybe has more credence than we’d think even with all the information we have right now. 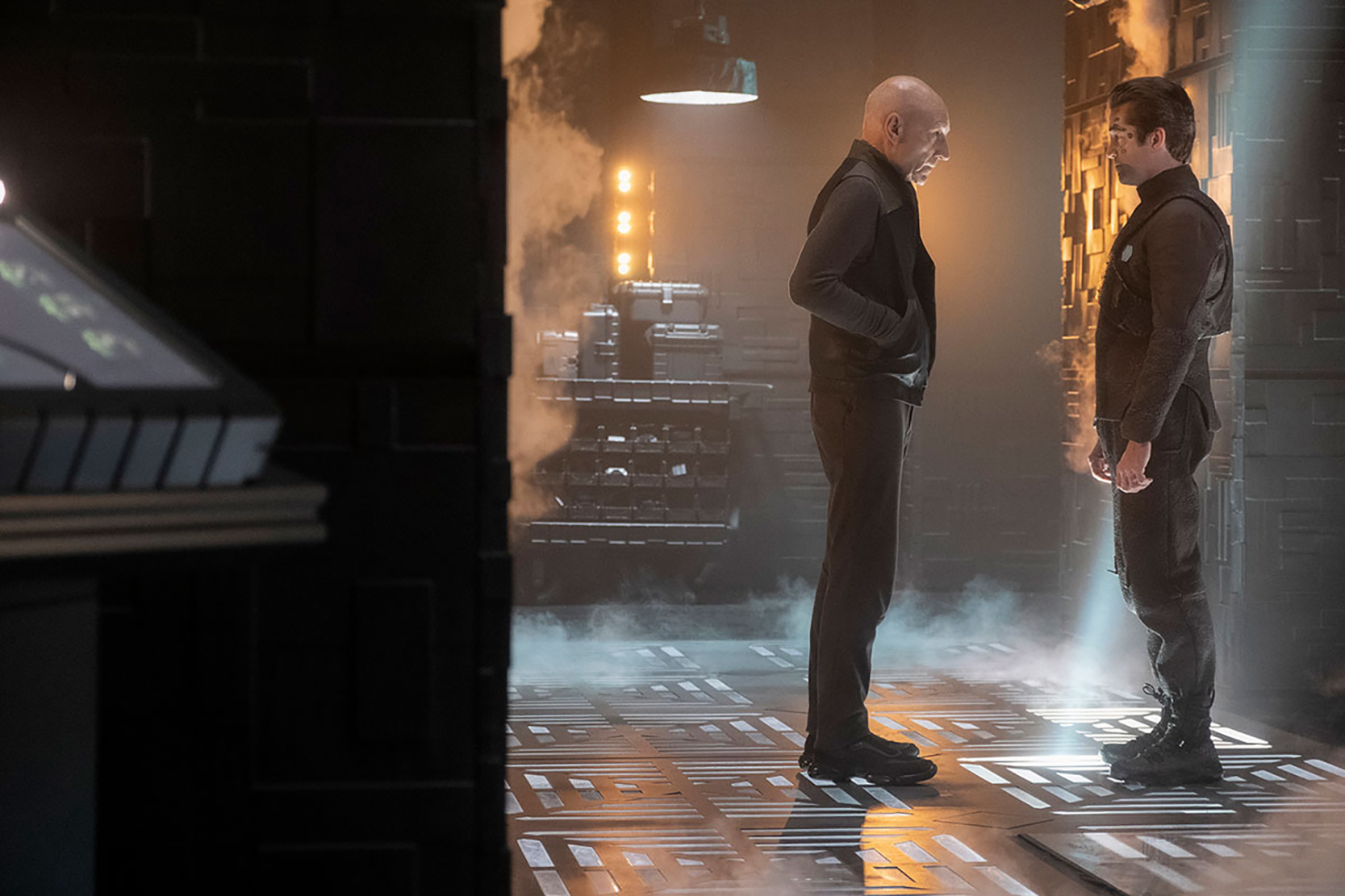 Picard and Hugh meet aboard the abandoned Borg cube in episode 106 of Star Trek: Picard.

Things heat up as Narek takes Soji to a Romulan meditation room where the answers to a recurring dream will send these two lovers on wildly divergent paths. Narek is probing, Soji is remembering, and Picard and Hugh are searching. And then it all starts to boil over.

Soji sees herself on her father’s table, a doll-like figure. She provides enough information about what she sees outside the home to give Narek and his sister (who is beautiful in her evilness) what they believe is the world where ‘the nest’ resides. Hugh and Picard realize that Soji is starting to activate just as Narek, with tears in his eyes, bids his lover goodbye – locking her in the room with a little bit of radiation poisoning for good deathly measure (yes, the puzzle box as delivery system).

And that fully activates Soji, who beats a hole in the floor and rips through the metal to escape death even as Narek wipes the tears away and gazes on the spectacle in wide-eyed Romulan wonder. And with that, the race is on – Narek, Picard and Hugh trying to find Soji first. You have to imagine, even as an activate synthetic life form that Soji has a million thoughts racing through her mind – and isn’t sure which are actually hers. Confusion is written all over her face and in her eyes.

Naturally, Picard and Hugh get to her first as she bursts through a ceiling onto the floor in front of them. Picard assures her he knows who and what she is and they need to make their escape now. Once again we’re given a fun little foray into the collective mind of the Borg as Hugh leads Picard and Soji through the Cube, touches some unseen panels he didn’t know existed, and leads them to the “queen’s chamber.”

Raffi recovering from a bender while Captain Rios talks to her in episode 106 of Star Trek: Picard.

Picard recognizes it instantly and he and Hugh admit neither has been there or seen this before, but they just knew how to get there and how to open it. And within the chamber, a sophisticated transporter system that was for the use of the queen only in an emergency. For me, the fun really began moments after a trio of Romulan guards showed up. Who should disobey Picard’s orders to stay on the ship but Elnor.

And with his arrival, the sword was flying and the body parts were dropping. I love this character. Elnor has this wonderful youth-infused naivete about things outside of his sheltered life and it’s a trait I find endearing. After a little slicing and dicing, he tells Picard that he simply ignored his command to stay on the ship. A straight-forward, practical answer. I loved it.

For his part, Picard offers a wry smile and thanks his young apprentice for the saving grace of his blade. And with that, Picard and Soji are transported to a spot light years away where the rest of his crew will, let’s hope, be waiting. The rescue has been a success, but not without potential casualties. Hugh and Elnor decide to stay behind and delay the approaching Romulans and as the door closes to hide the room, we hear Elnor once again say “Please, my friends, choose to live.” Again, he’s a delightful character that hasn’t had a whole lot to do yet, but one that I enjoy seeing. 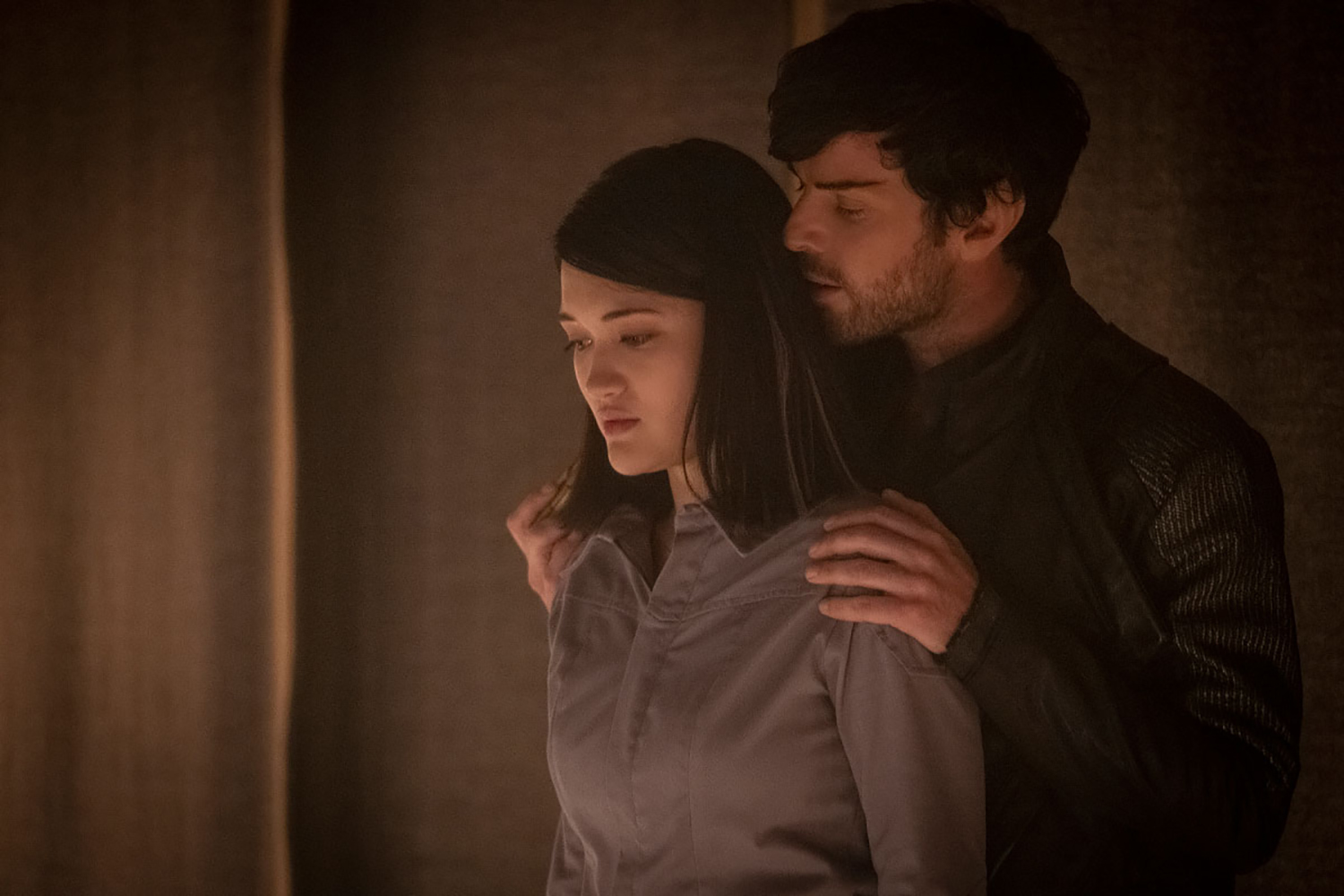 Narek and Soji in episode 106 of Star Trek: Picard.

And with that, Soji is away with Picard and, ostensibly, the rest of the La Sirena crew at some faraway point. We’ll see where that ends up (We have a Riker sighting). Unfortunately, I’m sure we’ll see where Hugh and Elnor wind up as they held the gates for the escape. It’s hard not to like both these characters, so I’m hoping we don’t lose either.

On a side note, it was somewhat tragic to see the slide of Raffi back into the bottle and the pipe. Her short and unpleasant visit with her son certainly opened a lot of old wounds and memories that she’d probably rather not experience again. Still, I was saddened to see her once again in descent mode emotionally and hope that she can pull out of it. It’s clear that Captain Rios has great affection for her and let’s hope that friendship will garner some healing salve.

But Captain Rios isn’t just helping Raffi, is he? No, he’s also helping Dr. Jurati in a much more intimate and physical way. Clearly, the good doctor has some hurt going on and after offing her old lover, Dr. Maddox, it would seem that she’s barely holding together. Whatever it was that so terrified and motivated her to kill Maddox certainly hasn’t left her confidently resolved moving forward. And with that, she turns to Rios, a man with plenty of past to forget and navigate. At first glance, they seem polar opposites, yet they’ve been drawn to each other from the outset, which has been obvious. 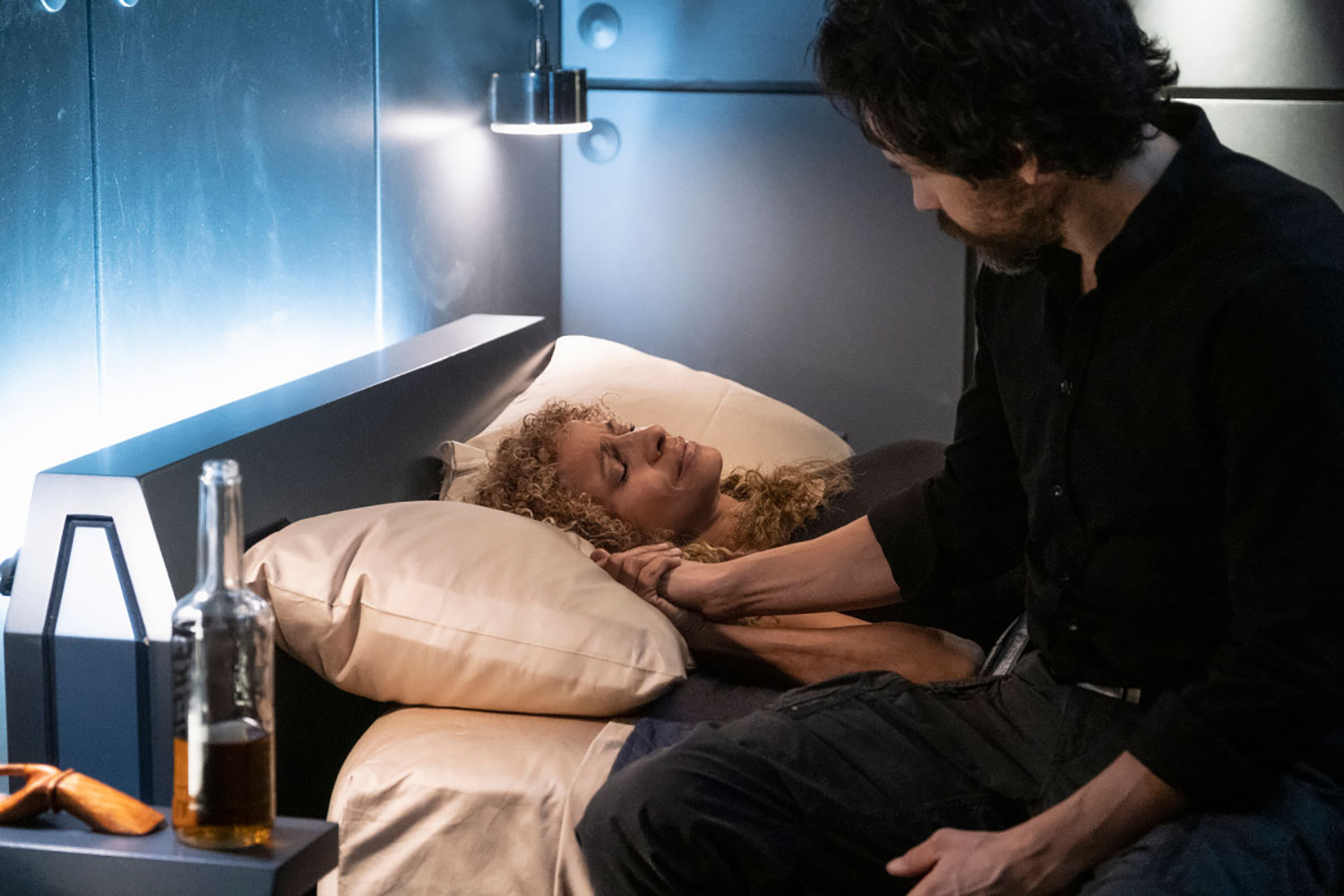 Raffi and Rios in episode 206 of Star Trek: Picard.

I enjoyed the opening of the episode where we see Rios doing some dribbling with a soccer ball…before Jurati rolls on in. I don’t know why, but it appealed to me and to the ability to keep himself busy while being by himself. He’s an interesting enigma and I feel he has much more to do moving forward. Perhaps we will get to further explore some of his demons as the series’ first season winds down?

Once again, Star Trek: Picard reminds us that each of our characters is carrying some sort of burden, some sort of past that gives this show a very different vibe than most Star Trek offerings. It’s not that it’s dark, it’s more of a shading that reminds us that the past can haunt us, or it can be used to spur us onto to something better. In the cases of Raffi, Picard, Rios, Jurati, Elnor, Seven, Soji and others, the battle between past and present (as well as future) is still being waged.