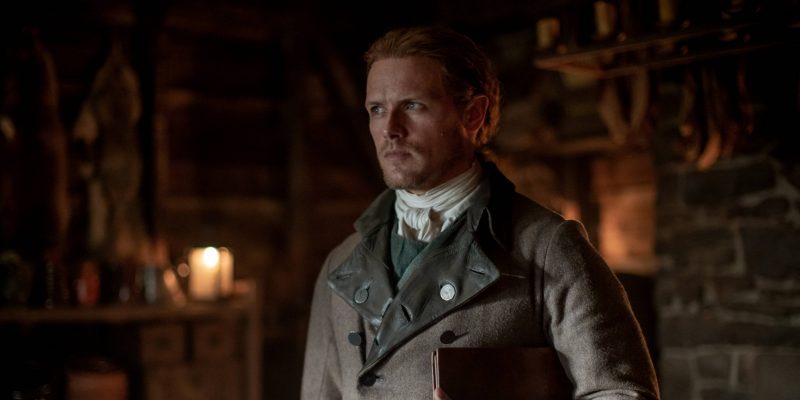 We’re now a third of the way through season 5 – with a book as big as The Fiery Cross, do you think we’ve gotten far enough into the story at this point? (For the record, if you go by book pages, we’ve gone just about a third of the way through it as well. Semi-reassuring.) This week’s episode, The Company We Keep, had some fine moments as well as some solely story-moving moments. Overall, in my opinion, hit a solid B – not bad for the season, seeing as we’ve also had two terrific episodes out of four.

Look to the end of this review for a contest! I’ve got some treats for a couple of readers.

Loss of the Gathering aside, so far this season has stayed fairly close to the original source material. In general, as I’ve said before, I haven’t had a problem with changes as long as they fit well within the overall story framework. This episode did have some slight changes, but for the most part was fairly faithful. The best moments of this episode were slight changes – expansions, really – from the story; the lowest moments were also. Some moments to talk about:

Sure, we have great primary characters in Outlander. But some of the minor characters, like Father Fogden and Elias Pound,  have kept us thinking about them long after they’ve gone. I don’t know how much, if anything, we’ll see of Isaiah Morton (played by Jon Tarcy) after this episode, but I’ve certainly enjoyed the expansion of this character. He’s been loyal to Jamie, quick to demonstrate that loyalty, and cute to boot. And this week, he proved to be romantic and passionate enough to rival any of our main love stories. This lovestruck young couple deserves their chance at happiness! From Alicia’s “he’s my first thought in the morning, and my last thought at night,” through to Isaiah’s challenge to Jamie and Roger, I was half in love with him myself.

I’m a fool, as you said. As are you. As is the Colonel. You’re both telling me that if someone told you to leave, told you that ye’d never see Mistress Mackenzie or Mistress Fraser again, you’d stand for it. That ye’d obey without a fight. If either of ye would go and leave the women ye love with all yer heart, say it now. Say ye’d go and I’ll walk out of here without another word. So I was biding my time – I had to wait til nightfall to prove it to ye. Will you have me? I may be bold and reckless and foolish, but how can I live without ye?

Of course, neither Roger or Jamie would ever walk away from the loves of their lives, and how can they condemn these lovers to lonely lives?

Us when we think about #Outlander. pic.twitter.com/VpLTcYIX9a

The song that Roger sings, sitting on the fencepost, is an old tune, and the lyrics (there are more than one set used with this tune) refer to Prince Charles during the Jacobite rebellion. The only audio version I can find is using the sea shanty lyrics that start, “Were you ever in Quebec?” Here  are the lyrics Roger sings: 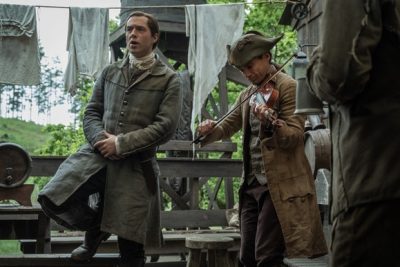 When he drew his gude braid-sword
Then he gave his royal word.
Frae the field he ne’er wad flee
Wi’ his friends wad live or dee.

Geordie sits in Charlie’s chair
But I think he’ll no bide there.
Charlie yet shall mount the throne
Weel ye ken it is his own.

I could listen to that on a loop! But as far as this whole piling on Roger thing – I hope there’s a redemption moment for him coming up. The writers seem determined to make him a sad sack, a man completely out of time, who can’t do anything right. Roger has always been one of my favorite characters of the series – he demonstrated, time and again, that he loved Brianna so much that he was willing to adjust to the time period, work to be happy and take care of his family. As depicted in the show, Roger is being dragged along, reluctant, wanting to be “elsewhen.”

Jamie clearly has little respect for him, despite Claire’s reassurance that he does – “He just entrusted you with the thing he loves most,” she tells him. Sure, but Fergus is more valuable in a battle, or Jamie would have him to this task; having Roger take Claire back to the Ridge fulfills two purposes – protecting Claire (although Josiah Beardsley, who will be with her, can likely do a better job), and gives Jamie the opportunity to fix the situation Roger created with his men by turning Isaiah over to the Browns. Claire is kind – Jamie is not, in this case. 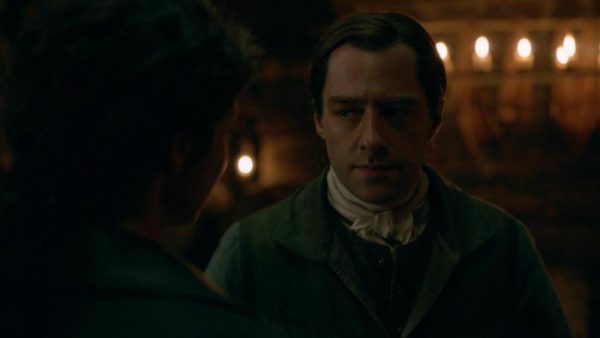 The Sword Dance That Wasn’t

Before the season, whenever fans talked about moments they wanted to see, Jamie’s sword dance was near the top. And the writers had to know that – it was an exciting moment in the book, Jamie performing for the gathered inhabitants of the Ridge. But there was something off about this. First, it was the Highland Fling, so I’ve been told, not the sword dance. And it seemed abbreviated, not the highlight that was anticipated.

Jamie’s dance moves have officially made our Monday 😍

Catch our favorite scene from the latest episode of @Outlander_Starz NOW on the #STARZ App! https://t.co/AiMcvcs75E pic.twitter.com/G9FCeEuiyi

Sure, Sam Heughan will tell you he’s no dancer, but Jamie competed with his sword dance as a young man. And really, should it have been done in trousers? Or saved for a place in the story where he could have done it as it was meant to be, wearing a kilt? Sorry, anti-climactic.

Bree is understandably terrified when, returning to the Ridge from town, she finds a coin in Jemmy’s blankets, and after questioning Mrs. Bug, realizes it could only have come from Steven Bonnet. He’s obviously seen her, and seen the baby. Her nightmare is close, and she sees this as a threat. And when Jemmy disappears, what else is she to think but that Bonnet has come to the Ridge to grab the child? This is one of those little changes to the story that I liked – never mind that it was the episode’s only truly dramatic moment, it keeps the spectre of Bonnet alive.

I had a moment of confusion – was the child playing with Baby Jemmy really little Germaine, who was able to quite clearly tell his uncle Roger that Grandpere thought he was a “hair tic”? This child who could only repeat “baw” when asked where his cousin was? Did the writers not see the season’s first episode?

But the table chat made up for it – I loved seeing Brianna and Marsali as friends. Marsali is a practical, intelligent woman, and even though she doesn’t know what fueled Bree’s panic, she recognized that Bree was blaming herself for something she had no control over. “I killed my father,” Marsali starts out, telling Brianna how, after abusing her and her sister for years, and wishing him dead, he was finally arrested and died in captivity. Don’t children think that way? “I did it, it was my fault, I wished he would go away and he did…” But as a grown woman, she knows that no matter what she thought, or hoped for, her wishes had no control over the actions of others. I don’t know how reassuring that was to Brianna – but I loved Marsali sharing her own childhood nightmare. 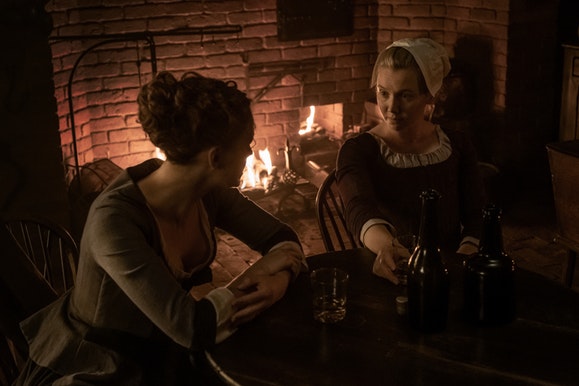 Does Claire Want a Baby?

This was a lovely, tender moment between Jamie and Claire. He watches her care for baby “Bonnie,” regrets the years they spent apart, not being able to raise their child together. Despite the circumstances of the baby’s birth, this, thinks Jamie, may be an opportunity for them to regain some of what they lost. And he suggests to Claire that they could keep the baby and raise her as their own, if it’s something she wants. Taking a beat, Claire realizes that no, she has had her chance, and wants only the life that she and Jamie finally have – she doesn’t need to raise another child. 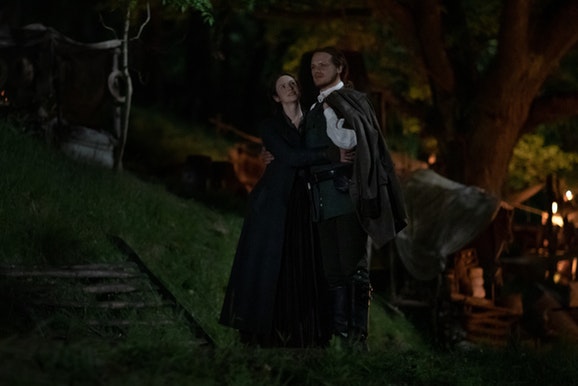 As sweet as this was, I really wish the writers had gone for the extra moment and taken the dialogue directly from the book, as they have in the past. Here’s the passage as it was written:

For my sake, I dinna want ye to bear another child. I wouldna risk your loss, Sassenach. Not for a dozen bairns. I’ve daughters and sons, nieces and nephews, granchildren – weans enough. But I’ve no life but you, Claire. I did think, though… if ye do want another child … perhaps I could still give ye one.

One complaint I – and many other fans – have had since the beginning of the series is that Jamie seems pushed behind Claire, not as important a character. Yes, much of the story is told from her internal monologue, and this episode did give us a little bit more of Claire voiceover, but she also had the forefront in the conversation about the baby, when it truly wouldn’t have taken much to share more of the depths of Jamie’s love. (For Diana’s thoughts on why she wrote the story leaving the child behind, see this article from Parade Magazine.)

Enter today for a chance to win some cool Outlander prizes! One prize is a copy of Nobleman Magazine, featuring Sam Heughan. Other prizes may include base sets of the official Outlander trading cards – I’ll figure it out before the contest ends! Three winners will be chosen and notified by email, FB or Twitter, and offered their choice of prizes available. Sorry, prizes can be shipped to US addresses only (I pay for postage myself). If you have problems entering this contest, please try another device or browser (Rafflecopter doesn’t always work well with Apple products). A note about the magazine – the copy that was sent to me by Nobleman has a slight scratch on the cover because of post office carelessness, but it doesn’t affect the interior pages. If a winner is interested in that prize but wants to see a photo of the damage first, I’ll be happy to provide that.

Listen to The Outlander Gab on the Air – Internet radio show every Tuesday night! 9 pm east/8 central
Click here to listen and get our call-in phone number!
Listen to past episodes as well!

And don’t forget to pre-order your Season 4 Official Outlander Trading Cards – go to our Shop for more information!