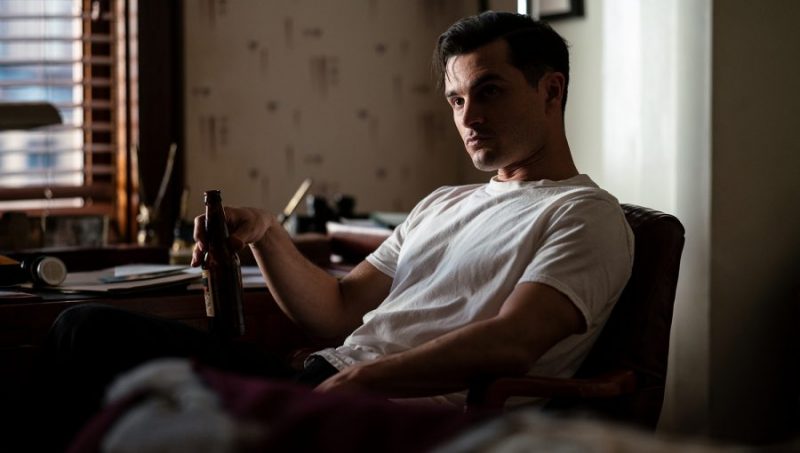 In a fun little twist, episode 209 of Project Blue Book took our dynamic duo north of the border to investigate an incident with a plane, strange lights and, as we see, so much more. The title of the episode, “Broken Arrow,” is a somewhat well-known phrase denoting the loss of a nuclear weapon. It’s a fun little pretext for our Dr. Hynek and Capt. Quinn to make what they think is their final journey as Project Blue Book.

The events of the Susie Miller revelation and arrest, and Quinn’s subsequent administrative leave from the Air Force, leads Hynek and Quinn to surmise that their run as Project Blue Book is about to come to an unceremonious end. With that in mind, the allure of one more adventure sends them to Canada where an unidentified plane appears on radar, then is joined by those pesky lights, which ultimately send it crashing into the forested hills of Canada’s rugged interior.

So, before we proceed, just be forewarned that there are SPOILERS ahead. So, this is your official SPOILER ALERT. If you’re okay with that, then let’s talk “Broken Arrow.” 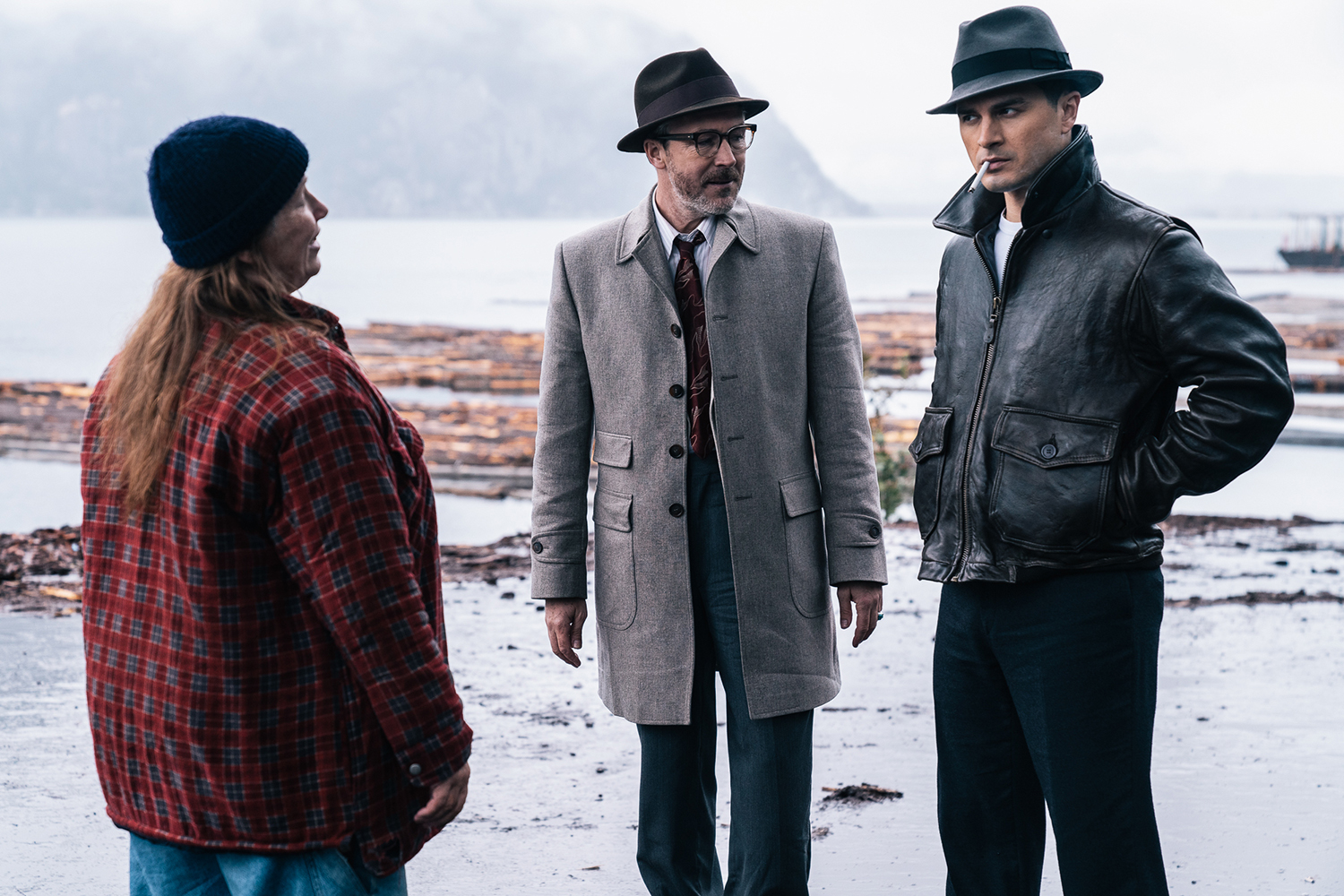 In the aftermath of Susie Miller, things are attempting to find a normal track. Quinn is doing his best to sit out his forced absence from the Air Force, enjoying copious amounts of beer when Hynek arrives with, perhaps, their final case. Missing plane over Canada, mysterious lights, you know the story. So, with that, our own Batman and Robin begin a Canadian adventure that turns out to be far more than they bargained for.

There are a lot of good moments in this one as this dark shadow of Project Blue Book coming to an end, or at least their participation in it, seems to be looming. There’s a bit of melancholy going on here and you also get a real sense for the mutual affection they’ve got for each other. In a sea plane looking for clues to wreckage, Quinn nudges Hynek to “take the yoke” and fly the plane a little bit. Hynek, nervous about stepping out of his comfort zone, eventually grabs the controls and “he’s flying.”

There’s a very satisfied and enjoyable look that comes over Quinn as he watched Hynek fly a plane for the first time and it’s here that you see that though they are so vastly different, the work they’ve done has built something special between them. I thought that was a good reminder of the change in relationship that has occurred during their time together. Yes, they often come at investigations in different ways, but they’ve been able to not only meld those differences into a cohesive investigative unit, but also have learned to appreciate the other for those differences. A good message there, I think. They even admit that they look up to each other. 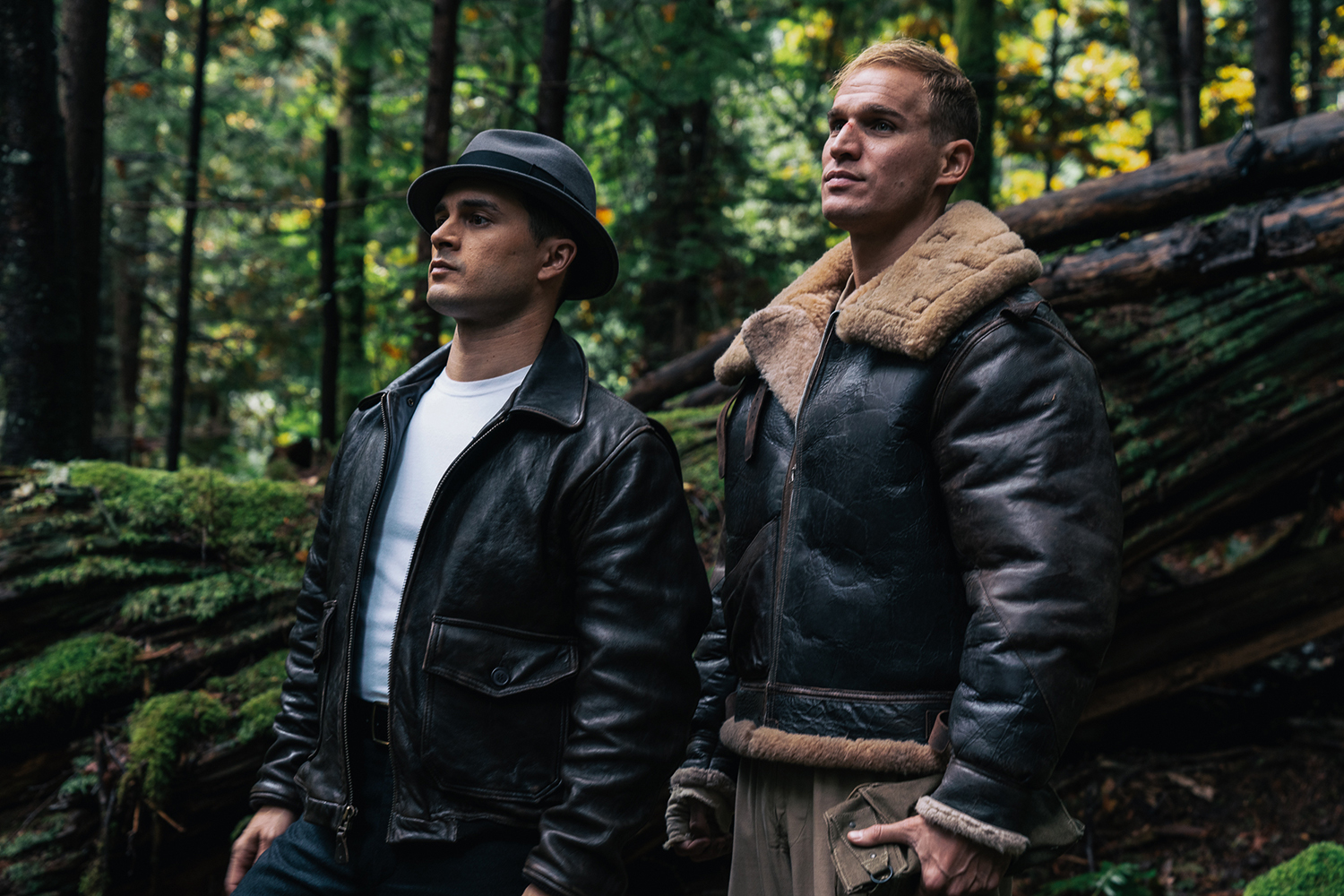 As always, our intrepid investigators make the proper connections, get a little intel from the locals and eventually find a clue that leads to another clue that leads to some interesting discoveries. They find one of the pilots injured on the ground, having parachuted to safety. He’s rattled and not really interested in providing much information. As the three take off in search of his partner and the fuselage, Quinn’s own radar is activated – something isn’t right. And Quinn’s radar is spot on.

Eventually, they find the other pilot still in his seat and after dragging him clear of the plane, Quinn’s suspicions are confirmed. The plane and pilots feel wrong and a quick scan of the plane shows Russian words on the control panel. We’ve got a Russian flight team down in Canada and, we later learn, a nuclear bomb somewhere in the woods. The search is on for the bomb and a better explanation of what’s been going on.

As an aside, Generals Harding and Valentine have been made aware of an incident in Canada and when they arrive, they discover that their boys are already on the ground. The relationship between the generals and our Project Blue Book duo is an interesting and tangled one. The push and pull of truth, obfuscation and needing certain investigative answers to go a certain way has been a cause of friction and mistrust between them. But it’s here that we also learn that the generals trust the instincts of Quinn and Hynek. 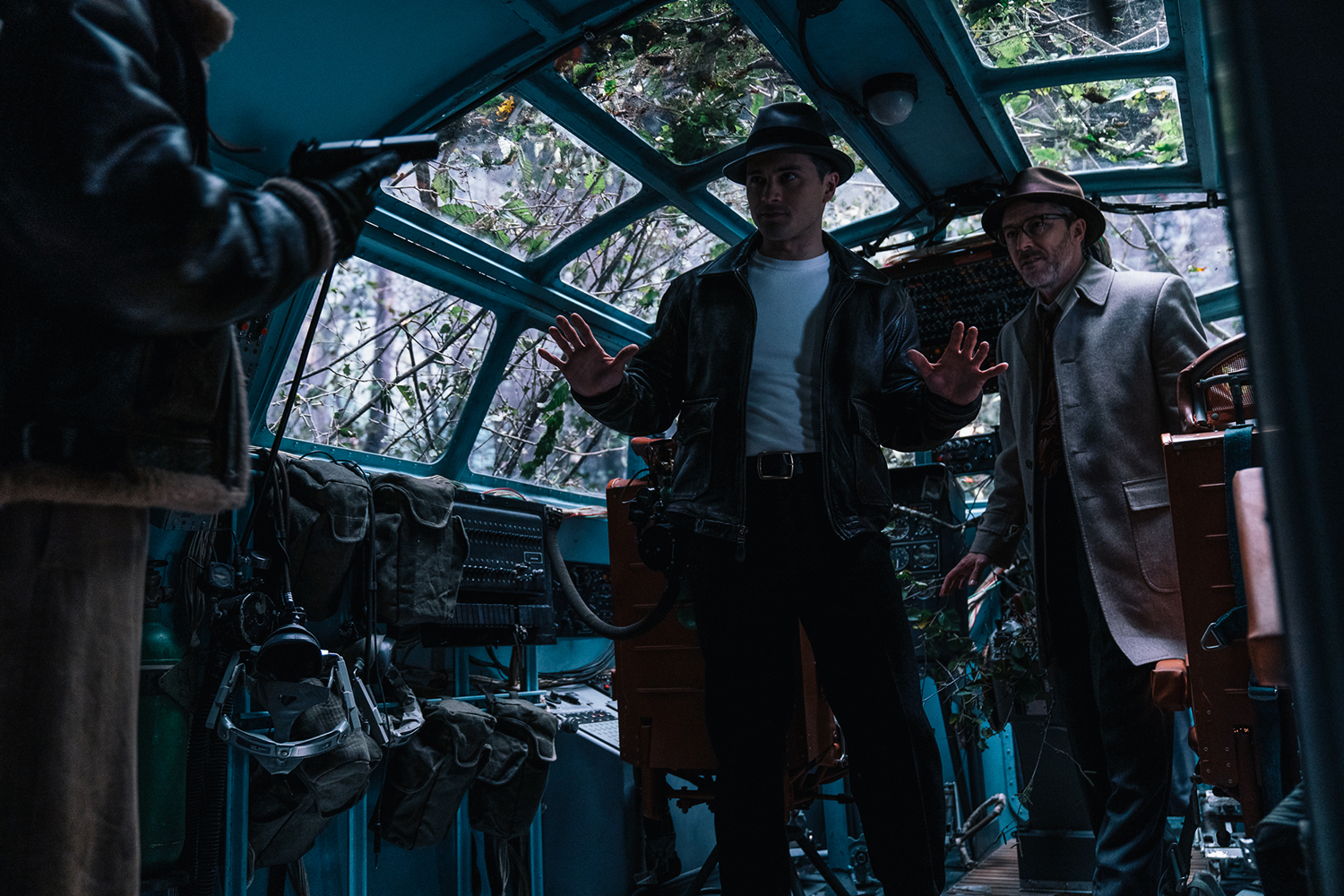 Their plane has been spotted and with them nowhere to be found, the generals know that they are likely on the trail of something. Such is the success of Project Blue Book that even at their cynical best, the generals know when the boys are onto something – and respect their investigative abilities. It was a small, quick moment, but I thought it said a lot about these relationships that have been built over two seasons. As an aside, I wonder if Harding has taken his LSD trip yet? Just a curiosity for me.

So, we’ve got the Canadian military now engaged in the search to track down our duo, which is now a foursome. It’s interesting to hear the conversations between the four men as they stumble through the woods, particularly when we learn that what they are looking for is a nuclear weapon. Seems the pilots were testing Canada’s ability to detect them when they ran into those darn lights. It’s interesting to see Hynek and Quinn’s reaction to the Russians.

Quinn gets his hackles up immediately and baits his comrades (see what I did right there?) throughout, while Hynek, true to his curious nature, tries to sift more information from them. It’s an interesting game of cat-and-mouse, though Hynek, for one, isn’t aware that’s what’s going on. He’s legitimately curious about these men and their mission and what they saw and experienced. 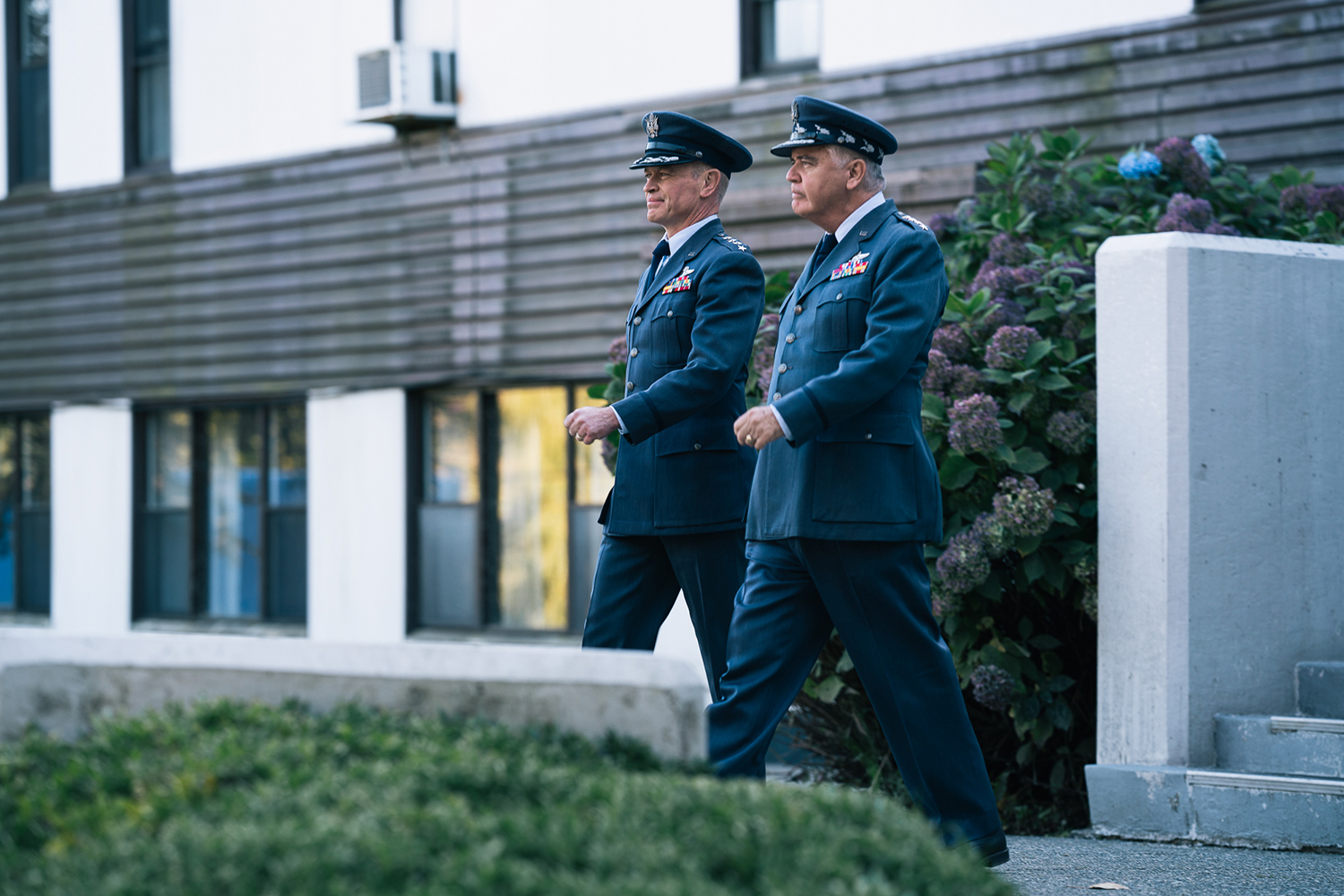 Needless to say, they find the bomb, which is huge. Unsure whether it’s armed or not, they need to disarm it and, through a process of elimination and paranoia, Hynek is again tasked with dismantling the firing mechanism. The bomb is so large, our scientist is able to climb into it. Again, we’re given a nice treat regarding Hynek’s ability to process information quickly and effectively, which is needed when it appears he has, indeed, dismantled the firing mechanism. Curse your sudden but inevitable betrayal, you Russian baddies. A gun is pointed, realities between the Russians and Americans are exchanged, and Hynek’s quick wits save the day.

So remember, if the nuclear core isn’t heavy, the nuclear material probably isn’t inside. And with that little card, Hynek is able to help Quinn turn the tables just before the Canadian Army shows up to help mop up the scene.

But here’s what’s interesting – Hynek had earlier posited a theory that the lights may be some kind of alien safeguard against the nuclear threat. The Russian pilot’s description of the air accident seemed, to Hynek, more like a surgical strike to separate the cargo from the plane. At the end of the episode, he kind of trods this grounds again when he wonders if the nuclear material was ever in there, or if it had been taken by someone else. 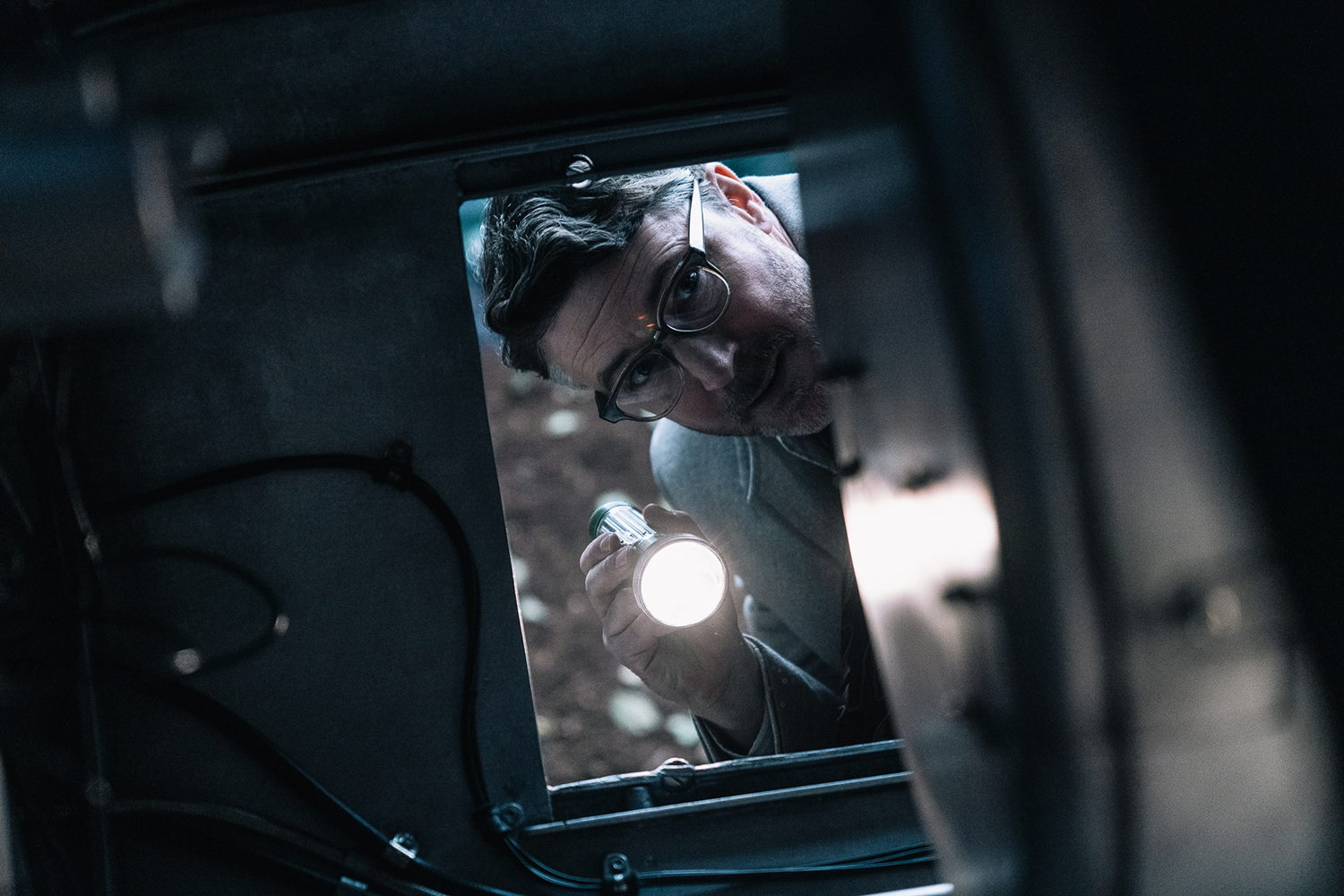 Was the mission just a test of the men? Or was the bomb live, but the materials had been removed by an unknown entity. Hynek’s starting to hypothesize that there’s a reason the sightings are often in and around military basis with nuclear capabilities. An interesting thought, that. I’m not sure Hynek believes that these UFOs are here to do people arm.

Maybe they are here to protect us from ourselves? Regardless, the good news is that Project Blue Book is back. Our boys saved the day in Canada and are back in the office and about to embark on some interviews with other cases when they get an interesting visitor. Should be noted, they seem calmly delighted to still be able to carry on this work. It’s a good moment.

Senator John F. Kennedy stops by and asks them to drop whatever they are working on because something’s happening in the North Atlantic. And in a fun little twist, these sightings aren’t coming from the sky, they are coming from below the water. Talk about juicy change-of-pace. It looks like our penultimate episode will be sending Project Blue Book to the North Atlantic where strange things are emanating from the sea. 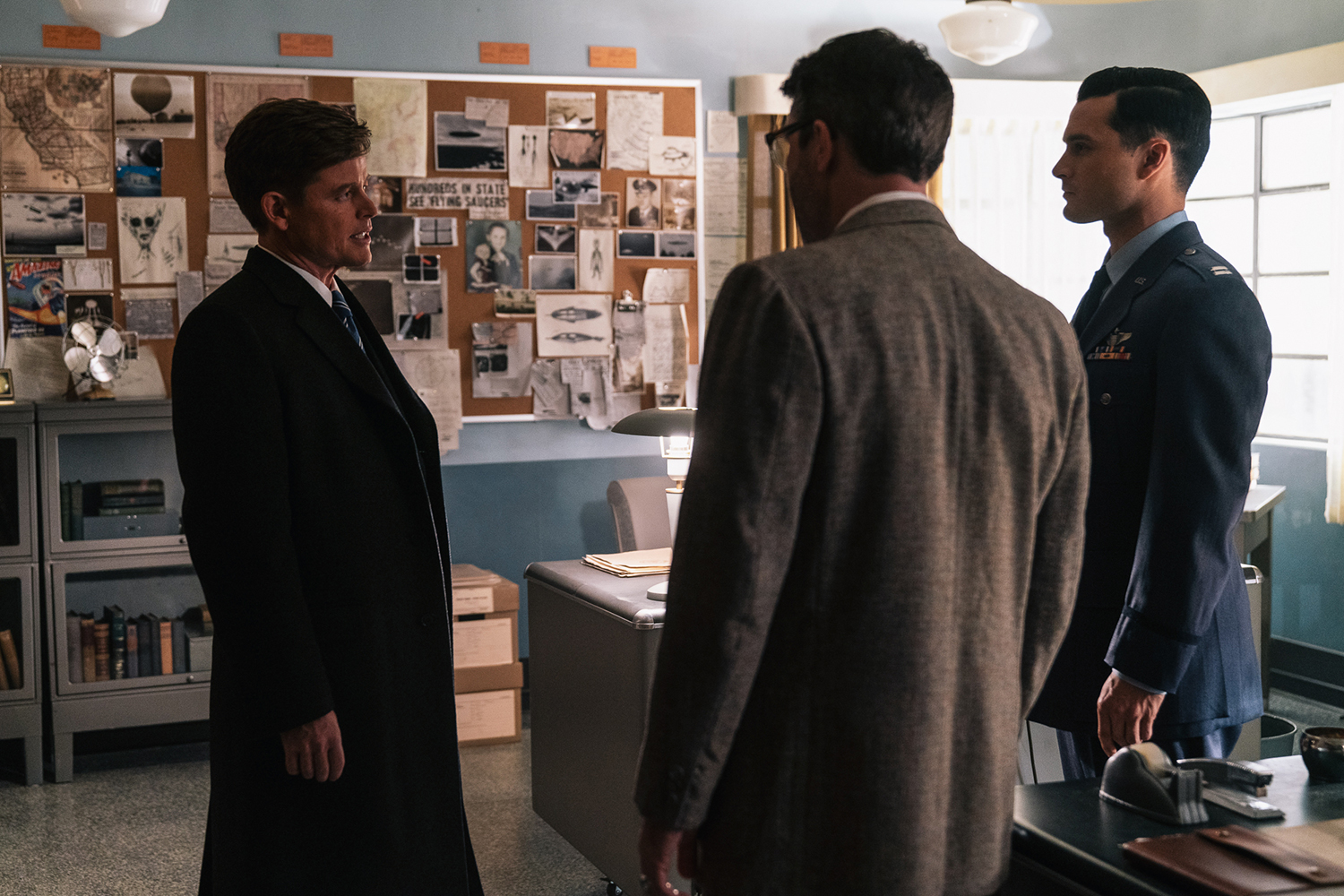 Should be interesting to see how well our boys play with the U.S. Navy, which (heads up) is conducting a massive multi-national exercise in that area. Call me old-fashioned, but I suspect cooperation aboard ship will be somewhat tense and limited. But we’ll see. And from the ocean’s depths? Are we talking underground alien lair? Let’s hope so, I don’t know about you but that kind of excites me.

So, let’s head to the season finale with hope and anticipation of something pretty extraordinary occurring. Personally, I’m ready for anything. I certainly hope we get one last bit of fun from Susie and Mimi. These two ladies have had quite a season 2 run and I’m hoping that, though we didn’t get them in this episode, they’ll show up a bit more in the finale so we can revel in their complete wonderfulness. Am I showing my heart on my sleeve? Silly me.