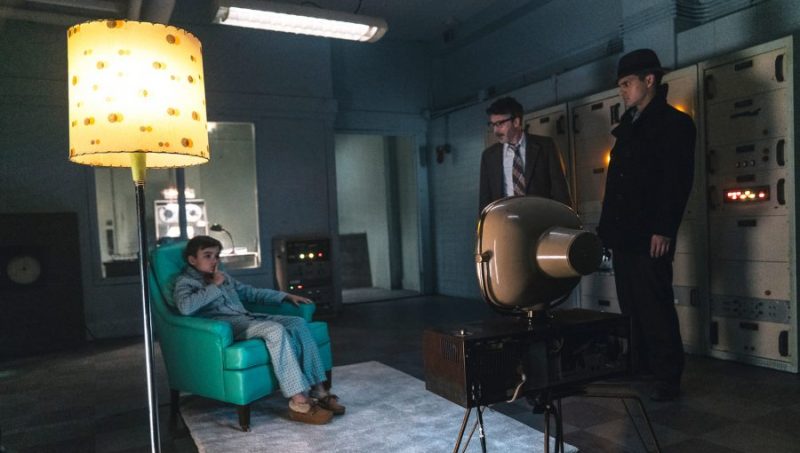 As it turned out, episode 207 of Project Blue Book was less about alien visits and more about the insidious nature of government experimentation. But there are mentions of aliens and ancient Native American curses and superstitions, which leads our two alien hunters on a fun adventure in Uintah, Utah. There, at the Chapman ranch, some very strange things are going on.

The son, Billy, seems to have a sleep-walking issue, while his parents are convinced that the unfriendly neighbor is behind a systematic plan to get them off their property. It all comes to a head one night when Billy gets out of the house (That’s one secure home, isn’t it) and when his parents, Laura (Spencer Grammer) and Rex (Jesse Hutch) track him down in the forest, we get blue lights and a strange creature shadowed in the light. Holy Skinwalker, Batman.

It’s a ghost, it’s an apparition, it could be an alien…or, it could be a skinwalker, part of a curse that has been put on the land, said the crusty old neighbor, who enjoys dressing up in wolf heads and assorted skins. I like a guy who “goes for it” like that, don’t you? Oh, he’s a friendly coot, but one that you kind of get the feeling he comes by naturally. He believes there’s something going on in the forest and he wants the Chapmans to know they are in danger. 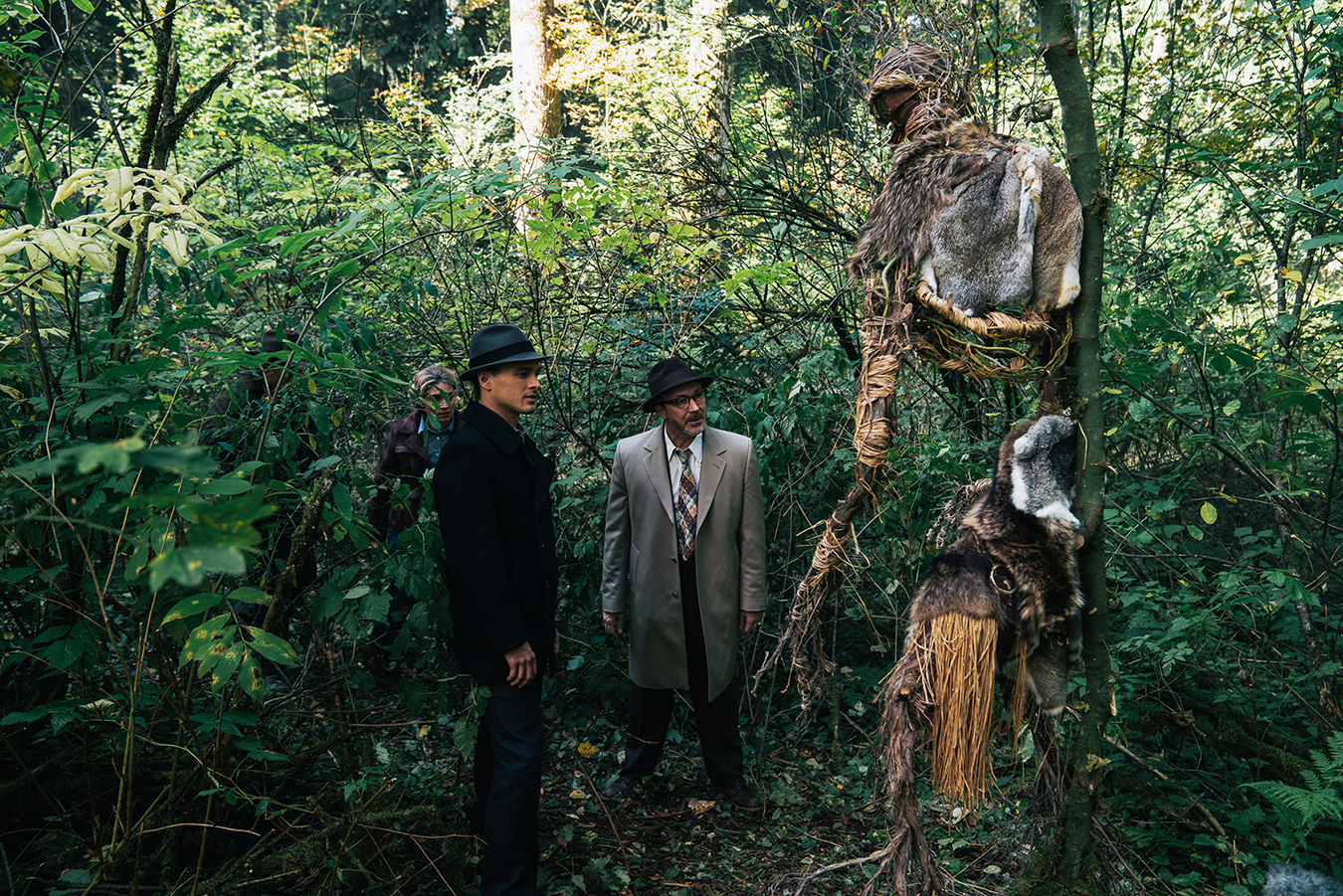 Turns out, they are. But, it’s not what everyone thinks. And that’s where things start as episode 207, “Curse of the Skinchanger” gets rolling. But before we get too into specifics, there are SPOILERS up ahead. So, if you hasn’t seen the episode and don’t want to be SPOILED, stop right here. If you’re good to go, let’s roll.

As noted above, this one has a little different feel than the first six episodes of Project Blue Book. And while I enjoyed the forested machinations of Dr. Hynek and Captain Quinn in Utah, what really intrigued me was some very interesting developments with our two intriguing ladies. First and foremost, we get the very interesting development of Susie Miller meeting General Harding. Secondly, Mimi Hynek is informed that she no longer has access to the Project Blue Book files. Her clearance has been essentially revoked by General Valentine.

In back-to-back scenes, our two lovely, tough and capable women have found themselves with a wall to overcome. And while Susie has suddenly drawn the interest of Gen. Harding, Mimi suffers yet another indignity when the Citizens for Saucer Studies – Ohio Chapter, decides that her recent brush with the Robertson Panel makes her a dangerous and problematic member of her group. She is sent away. Wow, tossed out by Project Blue Book and then shunned by the CFSS-Ohio Chapter. That’s some serious disrespect to our Mrs. Hynek, the paragon of ingenuity that she is. 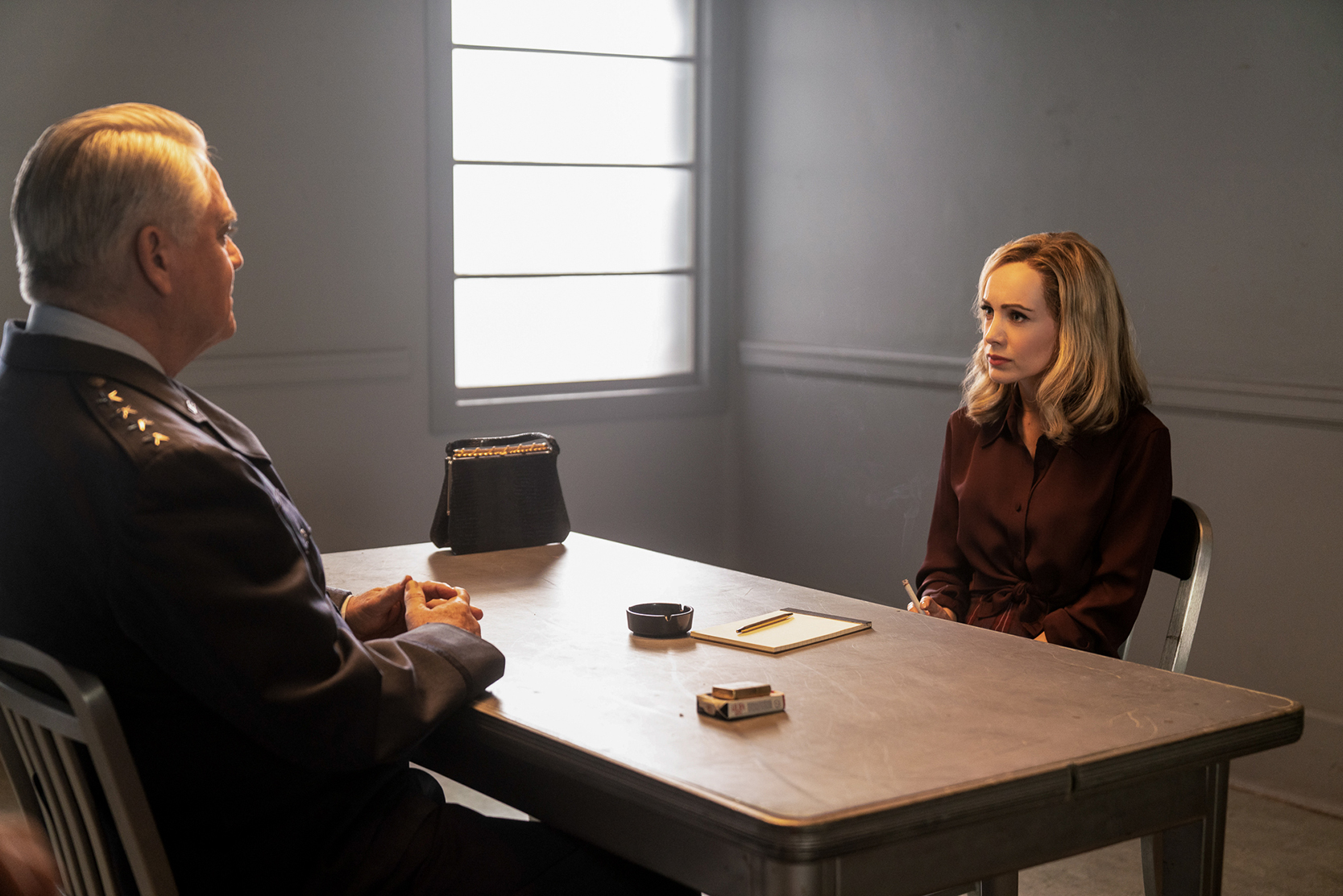 And that would lead us to the ring of keys sitting so temptingly on the desktop after she’s left alone for a few minutes at the Air Force base. Did she snag them? Oh, hell yes she did. Because, much like Baby in “Dirty Dancing,” nobody puts Mimi in the corner. I feel that some folks are going to learn that lesson in the coming episodes. I’m disappointed in Evan and his saucer pals. Kind of a catty group of alien enthusiasts, I think. But, there you have it. She’s been asked to stay away.

I thought Evan would have Mimi’s back, but when push came to shove, our local benevolent saucer seekers turned their backs on Mimi. I’m a bit irritated at their act. The Air Force tightening the screws, I can understand. But the saucer society shutting the door in her face? I’m appalled. Damn dirty apes.

“If they came for Blue Book, they’ll come for us too. Your presence here constitutes a risk that none of us can afford,” Evan tells her as he essentially ushers her out the door. Crushing stuff for our burgeoning alien investigator.

So while Mimi is getting shunned on two fronts, Susie soon becomes the guest of Generals Harding and Valentine on the Air Force base. Personally, I love the interplay and mental games that the generals and Susie engaged in. Ah, Susie is one cool and collected customer. She’s obviously a well-trained Russian operative who has played this scenario out many times and it’s fun to see both sides try to play the other, try to give something away. 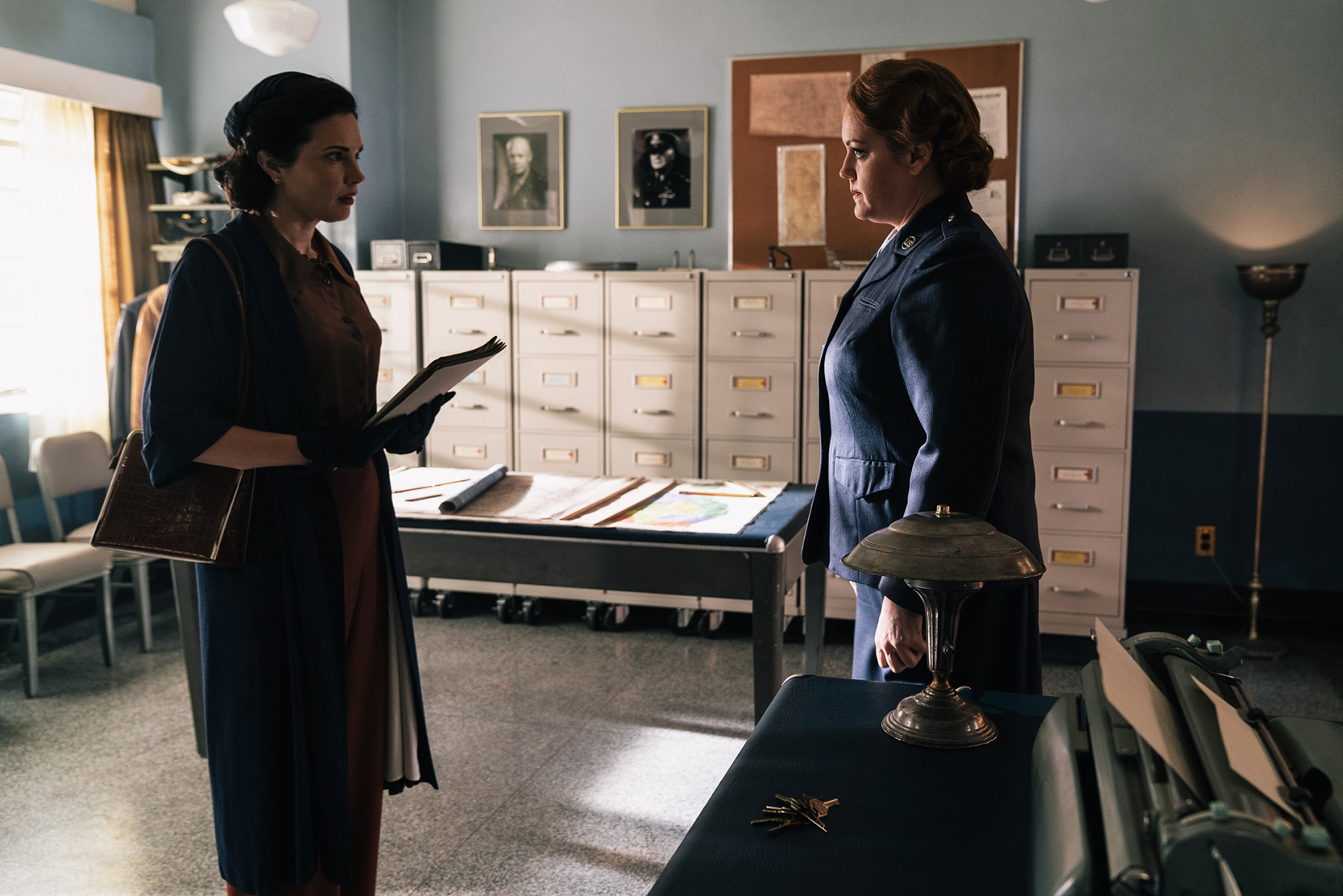 In truth, I could see why Harding was suspicious given that Susie (or should I say, Susan?) absolutely doesn’t seem to be Rizzo’s kind. No aspersions toward the dear-departed Rizzuto, but Susie is way, way out of his league and Harding catching her vacuuming would strike me as strange, too. But there it is. Rizzo had a meeting with Harding that he missed, courtesy of Susie’s gun, and that brought the general to his place, then Susie to Harding’s place of business.

And all the while, the lies were flying, the study of each other was such a treat. Susie, you are quite a woman of intelligence and cool. I dig you and I don’t mind admitting it. They let her walk, but they are going to keep an eye on her, which should be a fun little game of cat-and-mouse. Let’s see where it leads. As an aside, I hope that Susie and Mimi kind of circle back to each other at some point. T

hey were a fun couple of ladies. And in some ways, i think it was Susie’s dynamic that kind of helped Mimi sort of find this other part of herself. A little adventurous, dangerous and, dare I say it, alluring.

So, while our ladies are dealing with hurdles being placed in their way. Hynek and Quinn are trying to help this family. There’s something going on as there are earthquakes nowhere near fault lines, strange apparitions, some interesting hazy views of strange things, odd smells and weird sounds all emanating from in and around the family’s property. A strange metal rod that Hynek finds in the woods leads us to yet another secret government facility that’s using an old Army base nearby for “research.” 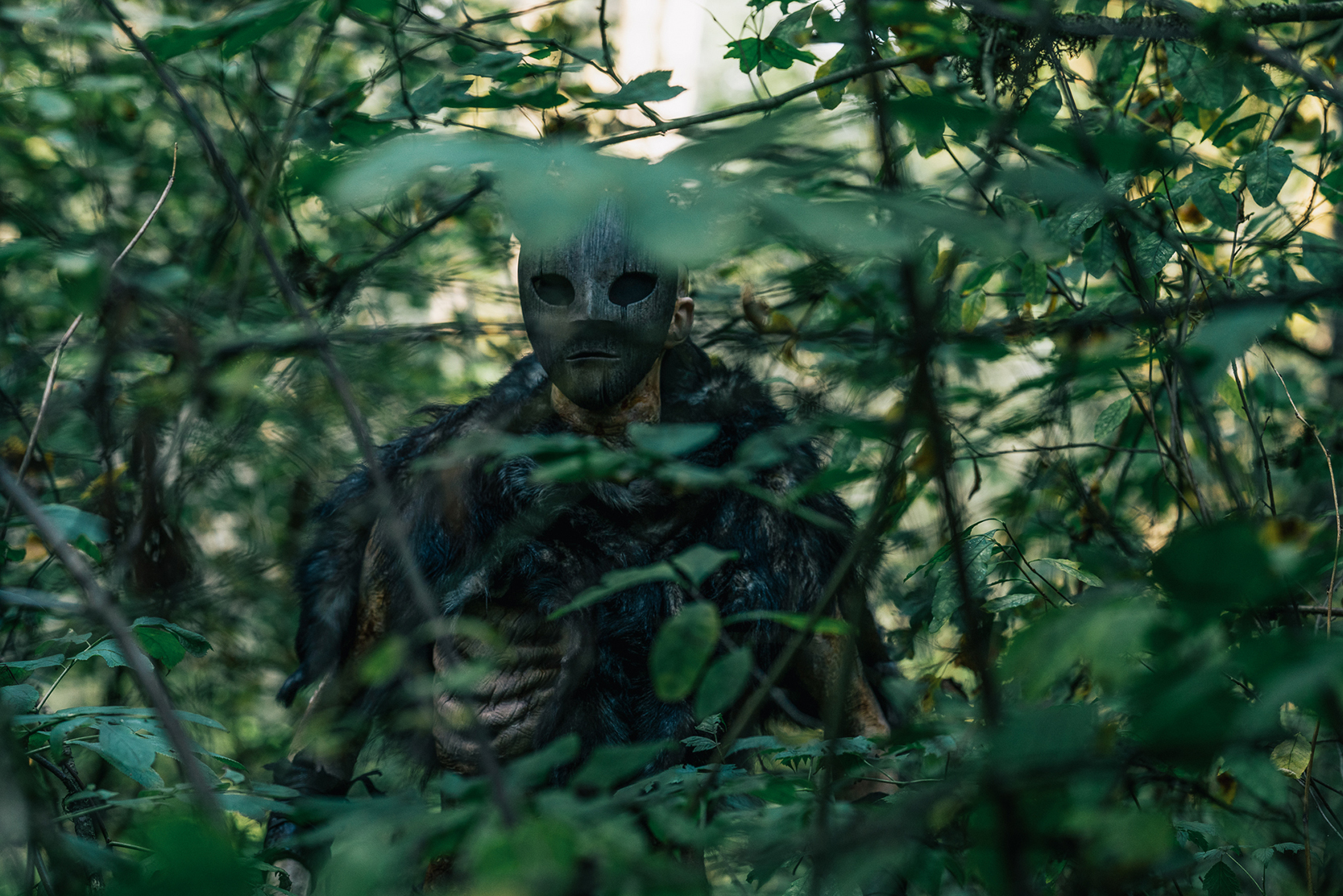 A Skinwalker in HISTORY’s “Project Blue Book.” “Curse of the Skinwalker.” Photo by Eduardo Araquel
Copyright 2020

While it was a delight to once again see JoBeth Williams on the screen, this time as the head of the research facility, it’s at this point you realize that the sounds, smells and other interesting happenings are probably traceable to this clandestine base. And you’d be right. A hidden door in the Chapman house leads to an underground tunnel complex that comes out, you guessed it, at the research facility. It’s there that we find missing Billy in front of a television, an obvious dupe in some sort of research.

Turns out, the facility has been experimenting with tectonic strain manipulation and gasses that create hallucinations – with hopes of weaponizing it. And those gases have given some legitimacy to the skinwalker vibe, along with Billy’s exposure to sci-fi television. Hynek and Quinn get caught at the facility as they find Billy and get a much fuller explanation of what’s been going on.

Turns out, they’ve been working in the caverns beneath the Chapman’s ranch, creating research of Ethelene gas that can cause oral and visual hallucinations. The Chapmans, it turns out, were lab rats. Nice to see Quinn and Hynek be very offended by this and decide to do something about it.

It’s also interesting to see Quinn and Hynek start to really exert their leverage in this one. When our lead researcher is asked about the Chapman family, her reply of an offering of apology to them simply wasn’t enough. Quinn and Hynek believe they owe the Chapmans more for what they did and exert their leverage to get that. It’s a fun moment and one that’s pretty empowering. 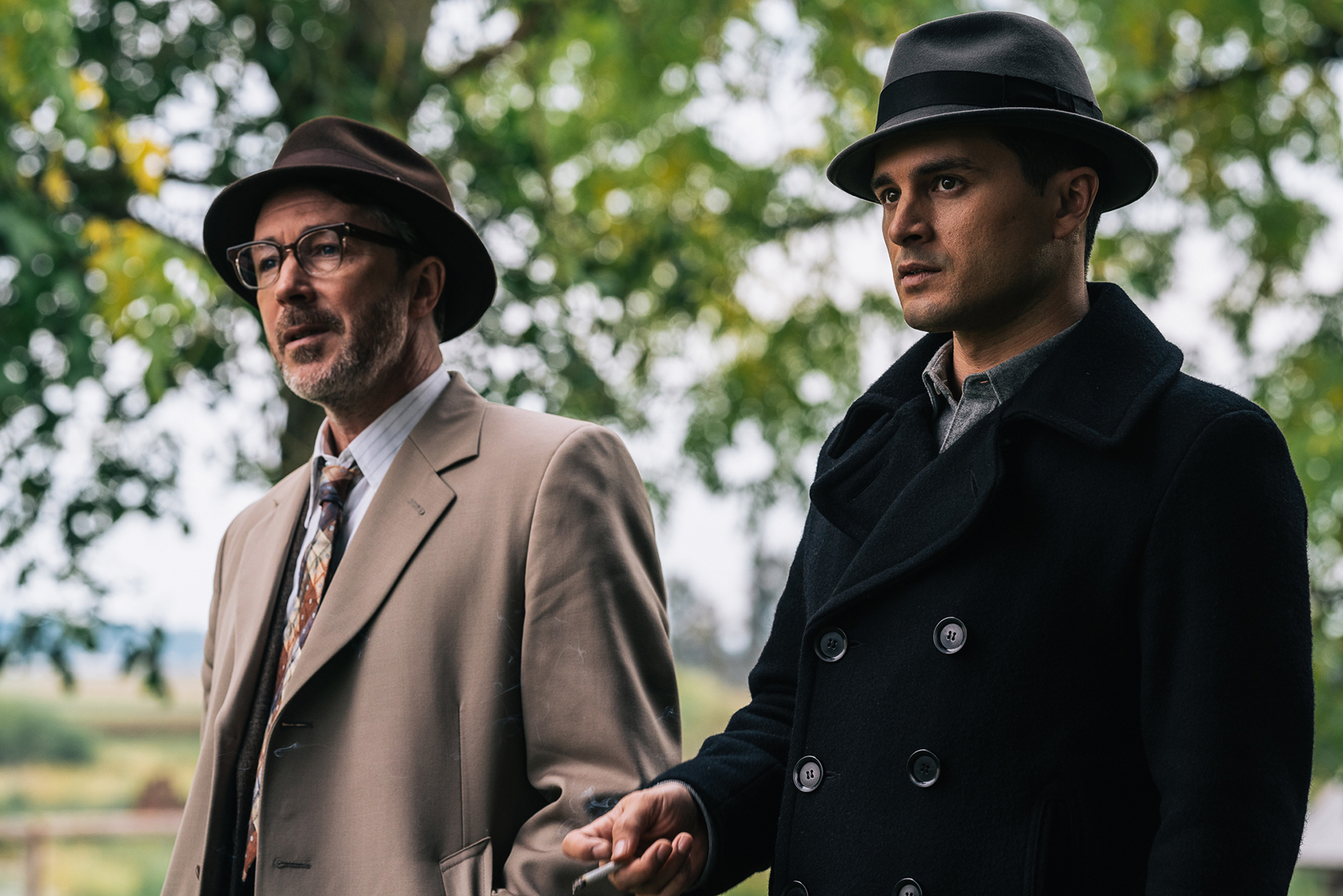 “Captain, you understand that the Air Force limits the information that I can share,” our research leader tells the boys. “Dr. Hynek and I have top secret clearance. Unlimit your information,” Quinn tells her. “If the Air Force hired you, they can fire you as well. Now we can get a couple generals on the end of that phone that would be more than happy to make that happen if we asked them.” Add in a reference knowing how to gain front page newspaper coverage of their research and our research leader capitulates nicely in the end.

It’s a great moment and one that was well done as they manipulated these people into a very tidy settlement for the Chapmans, who have decided to sell the ranch. Fortunately, they’ll have the financial means to start over, thanks to our boys. What’s repeatedly insidious about these government programs, though, is they don’t really stop being insidious.

We get a scary little scene of a new couple (with a small son) talking about buying the house (it has good bones, you know?) and who should be the agent that’s selling it but our character played by JoBeth Williams. It’s a cold moment, a moment that tells you things aren’t going to stop and the experimentation will continue with a new family as lab rats. Chilling stuff, that.

This was a little bit of a different type episode. It harkened a bit back to X-Files in terms of strange things happening through a strange confluence of events, some easy to spot, other frightening and potentially deadly. While Billy was convinced that aliens were around (more a product of the gas and sci-fi shows he was watching), this episode swung around Native American legends and government experimentation. I found it interesting and certainly enjoyed the new paths that our ladies have been forced to walk now.