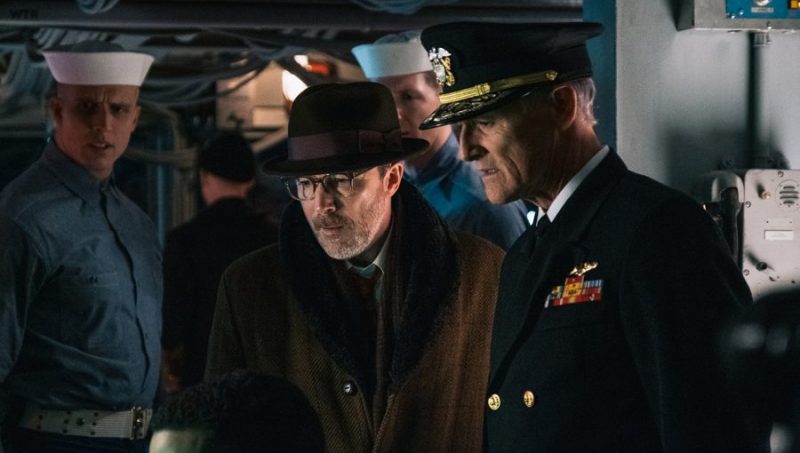 I think that finishing off the second season of Project Blue Book with a look at, not the skies, but the waters below was a fun way to bring it to a close. The episode, titled “Operation Mainbrace,” takes Dr. Hynek and Captain Quinn well out of their comfort zones as they embark on an adventure aboard a U.S. destroyer, and tangle with an admiral who isn’t up for a UFO investigation, but seems to be spoiling for a fight.

Mainbrace was a naval operation that was the largest joint naval exercise since WWII and in 1952 had plenty of strange things occur during the real-life operation. It was intended to send a subtle notice to the Russians. Something wild happened and Sen. John F. Kennedy feels that his intelligence is untrustworthy at this point and enlists Project Blue Book’s help in what he thinks is a UFO sighting of some kind – from the depths of the ocean. Turns out, there’s been a sighting of a “ghost ship” and a large, rectangular ship of some kind emerging from the water.

I like the fact that after all this focus on the skies and space, the season 2 finale takes us somewhere very different – the sea. But before you go on, be forewarned that there are SPOILERS ahead. So, be careful about those SPOILERS. If you’re good, then let’s pipe you aboard. 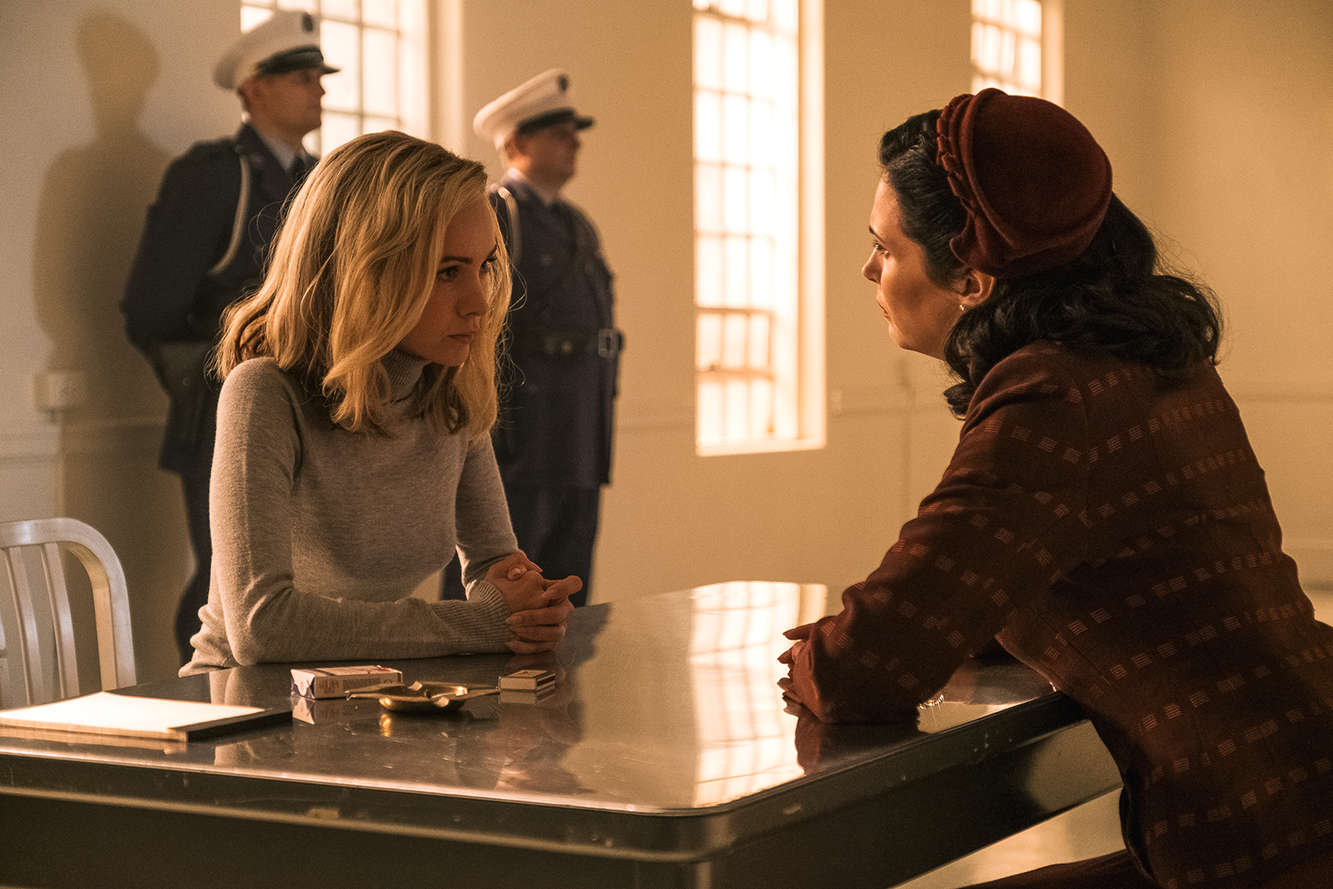 First, I just have to comment on the return of my two favorite ladies – Susie Miller and Mimi Hynek. Ah, the work of Ksenia Solo and Laura Mennell is always such a joy to behold. There’s a real synergy with these two and I was glad we got one last moment between them – Mimi meeting Susie at the detention area. Susie had asked for the meet and we found out why. She was prepared to give up the biggest Soviet spy fish in Ohio to her friend and the military – as well as tip Mimi to a little prize hidden in Mimi’s son’s room.

Their meeting was, in may ways, a sad one, and it was beautifully done with a rawness and sadness that was palpable. Through the work of Solo and Mennell, you could feel that they both had valued their friendship, their kinship, and the way it was ending was heart-rending on many levels. Mimi felt betrayed, Susie felt trapped, and the result was death, destruction and two women who will never be the same – and will certainly be lessened by the overall experience. Such good work by both Solo and Mennell (Is my adoration showing?).

And the scene where Mimi tracks down Susie’s daughter, who’s now in the area? Man, that was killer. There’s a part of me that wanted Mimi to snag up that darling little girl and make her Mimi’s very own. I suppose that would be too fairy-tale, but that’s all I could think of when the little girl was asking about her mommy. Wow, so good from Mennell right there. Thanks for sharing those gifts, you two. 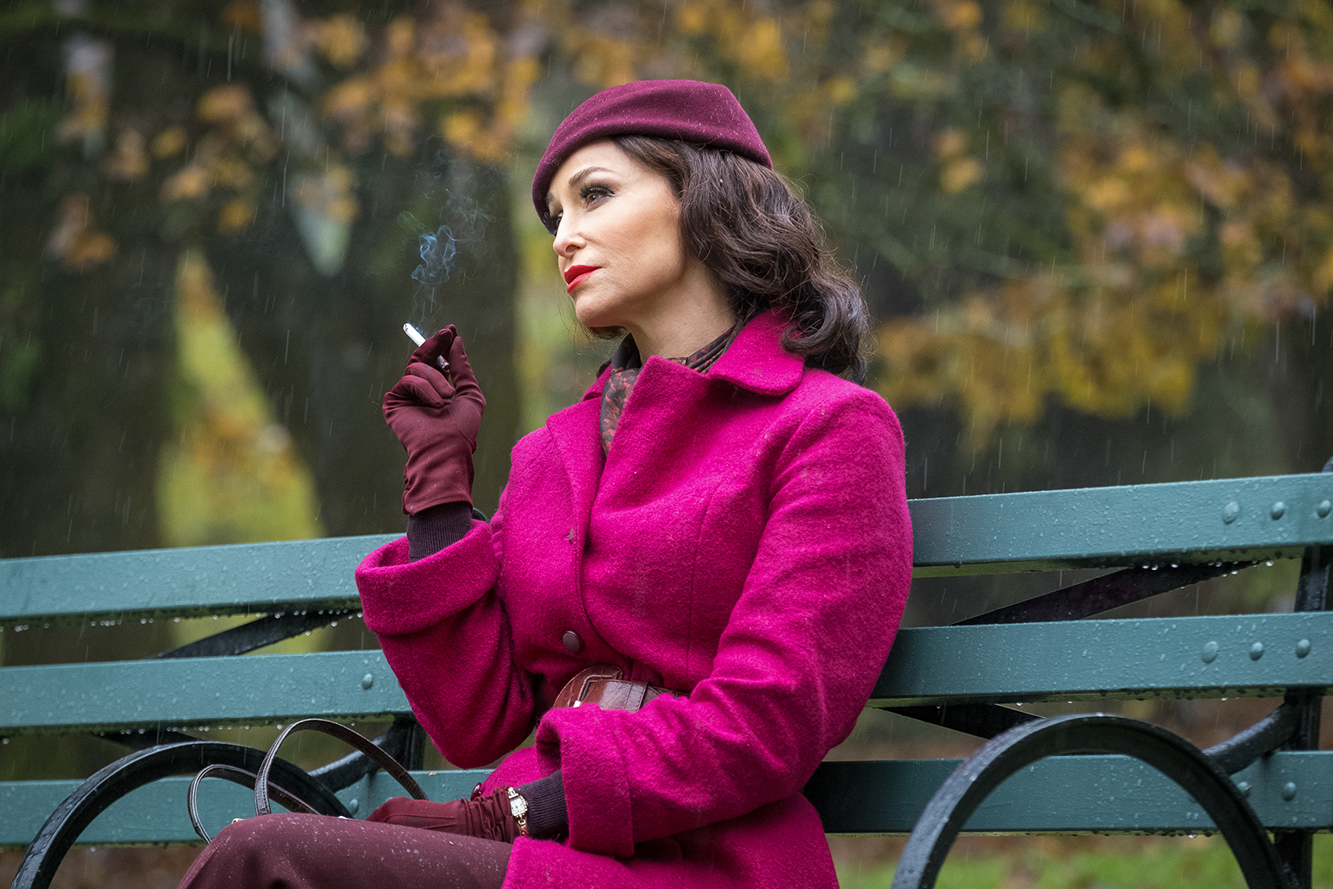 Meanwhile, on the high seas…

Naturally, the boys find a somewhat unresponsive admiral aboard the U.S.S. Wisconsin. It’s obvious he has put a gag order on his crew as the stories they tell are wonderfully consistent in their denial of anything happening. That’s something that activates the radars of the boys. It’s clear that cover-ups aren’t something they have grown to accept. And aboard this ship, there’s a full-blown cover-up going on.

What’s great is that it’s that shared intuition that kind of makes them so formidable. They land on the idea that there’s someone on that ship that knows something and will talk about it and when they see guards at a door, they know. A quick chat with two officers who wouldn’t play ball with the admiral, a nifty retrieval of a camera one of them had on deck, a little darkroom magic on the ship and lo and behold – the triangular ship in beautiful black and white.

Even with that proof, the admiral, true to his desire to provoke the Russians, is convinced it’s Russian technology and they have gained a tactical advantage over the United States. I do enjoy the Cold War paranoia that was certainly part of this era, and must have been maddening to people like Hynek and Quinn – particularly Hynek.

It’s so interesting to see how they respond when they bump into that fear, that wall of cold war suspicion and how those around them view the sightings in such complete Cold War mindsets. The admiral of this episode is that guy. 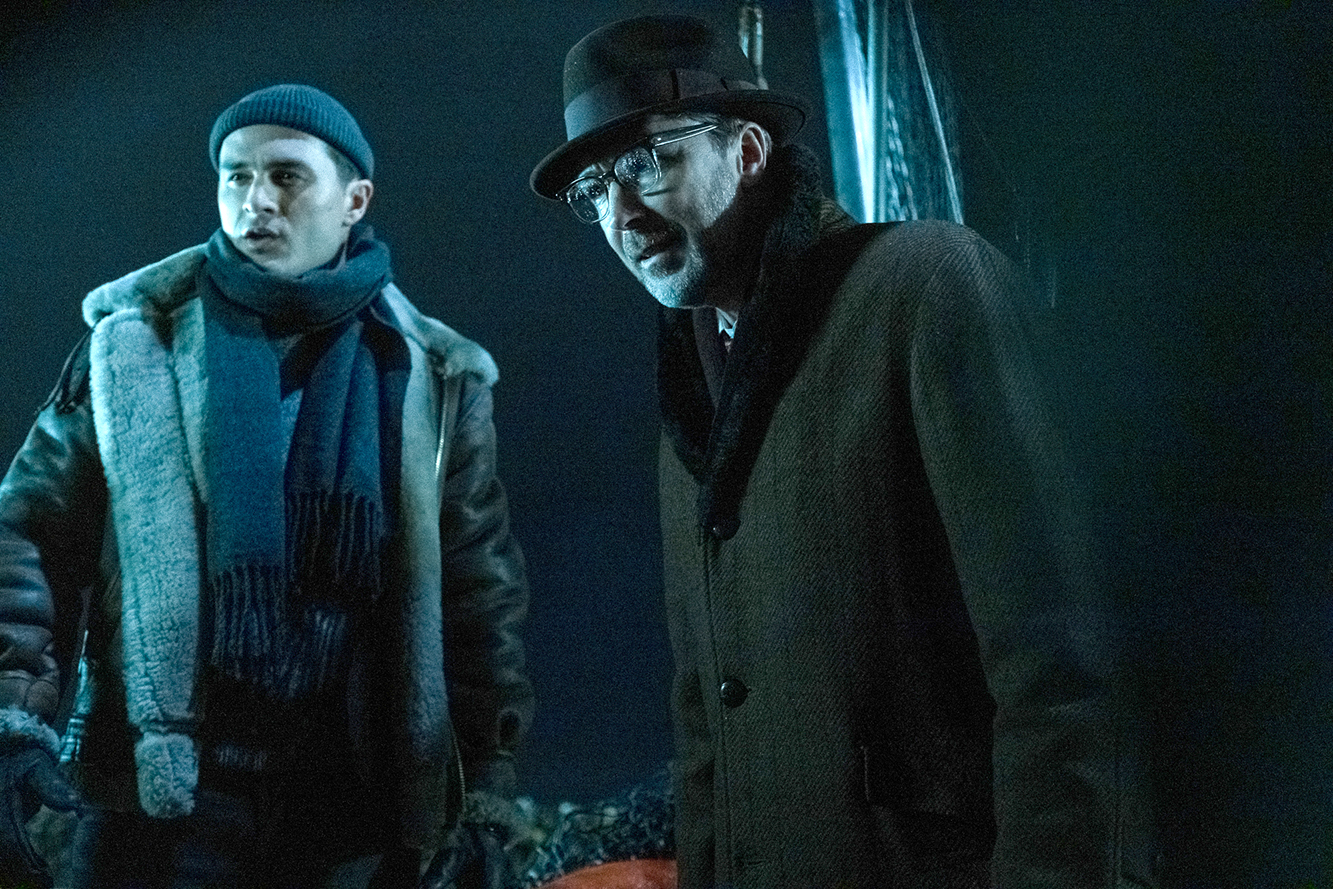 Quinn gets the military mindset, but Hynek really rebels when confronted with it and in this episode Hynek has several moments where he goes at the Admiral over the evidence they are gathering. For a mild-mannered professor, Hynek’s passion for the Project Blue Book research often gets the better of him. In this episode, he kind of forgets his place and his lack of pull on this ship and it almost lands them in the brig.

But that all changes when the mystery boat shows up again. It’s not a ghost ship, but a working fishing troller that has, apparently, been transported from Shanghai’s home waters to the North Atlantic by – something. A loan survivor (The Navy’s search of the vessel was, shall we say, lacking) is there to tell the tale of a vessel rising up from the ocean’s depths. I have to hand it to Hynek and Quinn, they are very capable of taking risks and ignoring the rules when they feel there’s clues to the mystery involved.

That’s how they discovered the mystery of the fishing vessel and started putting it all together. The ship was snatched out of Asian waters and brought here. You can feel the vibe that something’s going on in the North Atlantic. But what? And how do the triangle ships figure into it? Are they truly Russian or something more mysterious? How’d that boat travel more than 10,000 miles in two days and still have nearly a full tank of fuel? And the wood fusing like that? Something’s very weird here and I think it really stimulates our pair of UFO hunters. 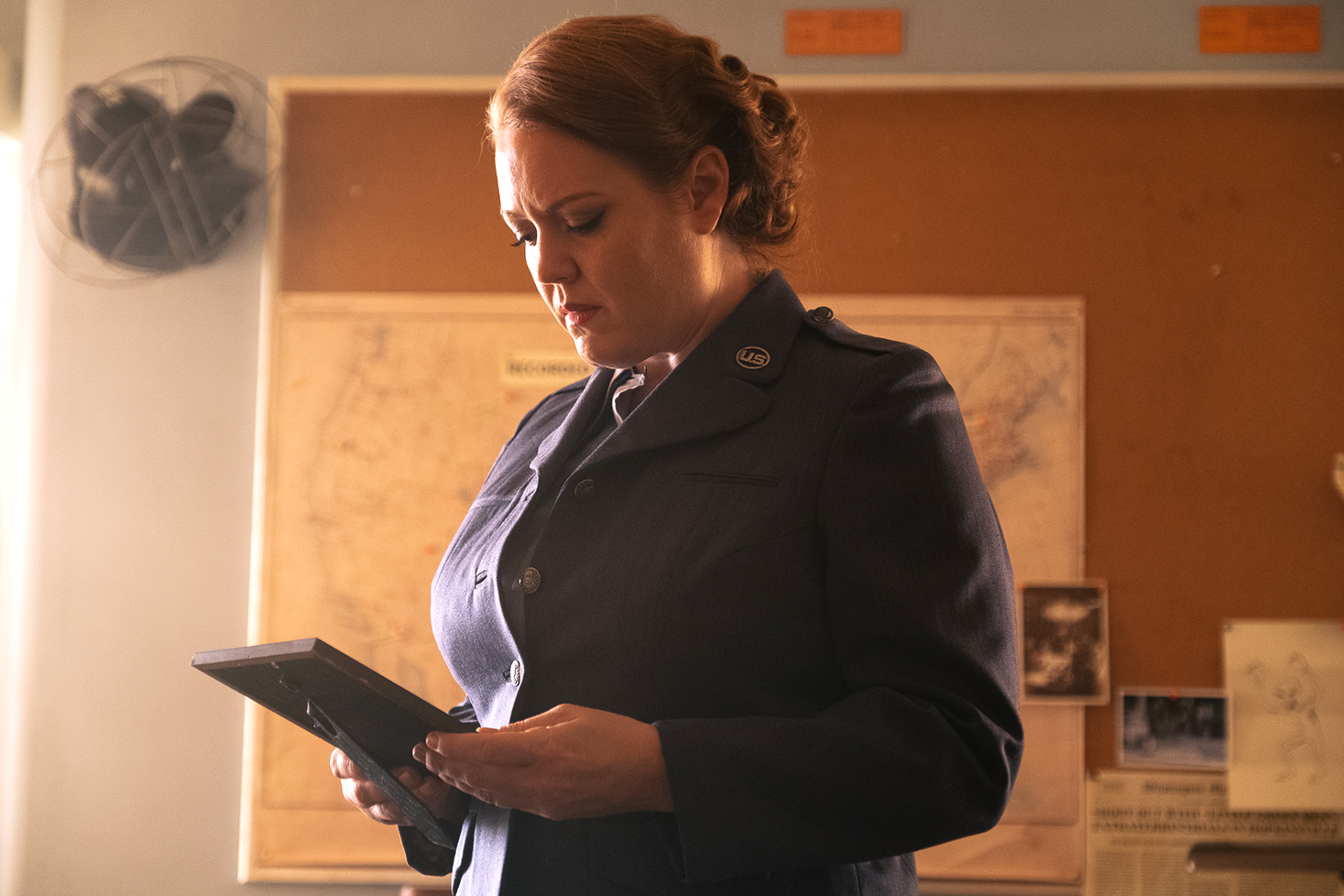 But that’s only the easy part of what Hynek and Quinn are going to experience. Turi, the lone man left on the fishing troller, suggests that the legends of cities in the sea that all fishermen talk about are true. “We are not alone,” he tells our pair. While Hynek may be more passionate about the hunt, it is left to Quinn to take that decisive step. The triangular ship emerges from the depths again and this time Quinn acts decisively. Turns out, Quinn has some basic training in underwater submersibles and he’s going to use that training to see what’s down there.

Let’s be honest, Quinn is kind of kick-butt chap who, when he sees a need for decisive action, isn’t afraid to be “that guy.” I mean, he had very limited training and yet he jumped into that sub because he had to know what was down there. Honestly, as these two have developed this relationship, I think Hynek has really rubbed off on the Air Force captain. And I liked it.

I’ve always enjoyed Quinn’s moxie. He may not have the fire in his belly for UFO hunting that Hynek does, but he’s not one to shrink from a challenge and that’s what he accepts here as he steals a one-man sub from the ship and begins his dive to the depths to see what is going on – and why? The ship is tracking them, Quinn is down there looking for evidence, and the admiral is determined to drop some depth charges on whatever is going on. You can see where this is going and in the end, the tragedy that we suspect will happen – happens. 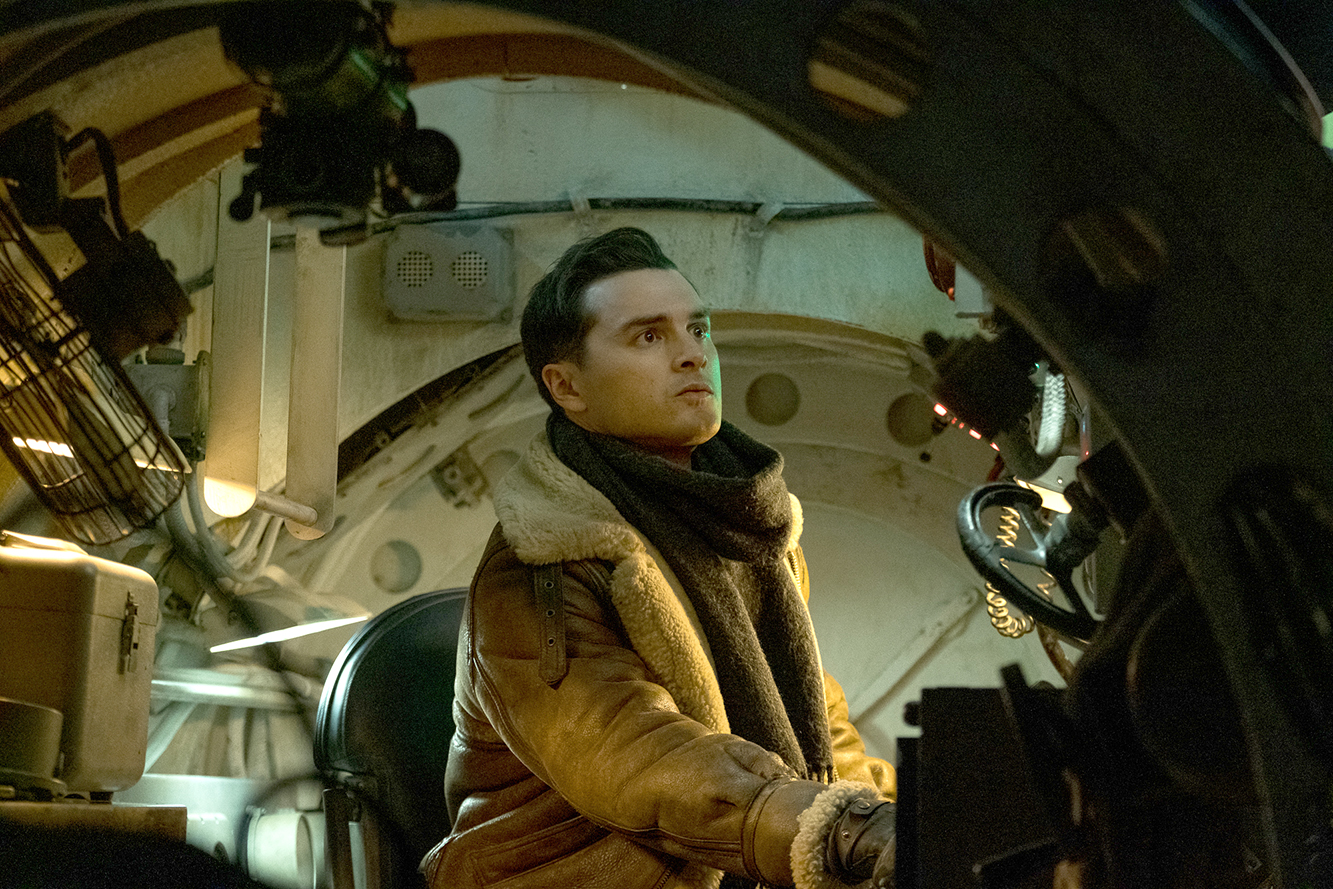 Quinn and his sub are gone in the aftermath of explosions – then he’s gone. But not before we see that Quinn has seen something remarkable – three triangle ships converging on a luminescent geyser swirling up from the sea floor with three ships around it. His calls to the ship offer some clues, but it’s too late. “It’s beautiful,” he tells them. We also note that the rest of the depth charges don’t explode – they simply dissipate. I mean, that alone would make me very jittery. Something simply neutralized them in the depths of the ocean off Norway.

But with Quinn’s apparent death, Project Blue Book looks like it’s done. And as Faye is packing up the office, Generals Valentine and Harding go over the cover story that’s being put in place, something we are really getting used to, right? There’s a solemness to the moment, a realization, I think, that there was something special about Captain Quinn and the work they did through Project Blue Book.

But that isn’t the end. Turi’s words about a city under the sea and the sacrifice that Quinn has apparently made has driven Hynek into a calculating frenzy. Mimi is worried about him and notes that he “has to let him go.” But that’s not our guy’s way. There are clues to be followed, questions to be asked and as he goes over them all, he starts to create a picture of something very intriguing. Reports, coordinates, sightings and more lead him to an interesting discovery – the story isn’t finished. The diagram he’s been seeing is coming to fruition on a map. 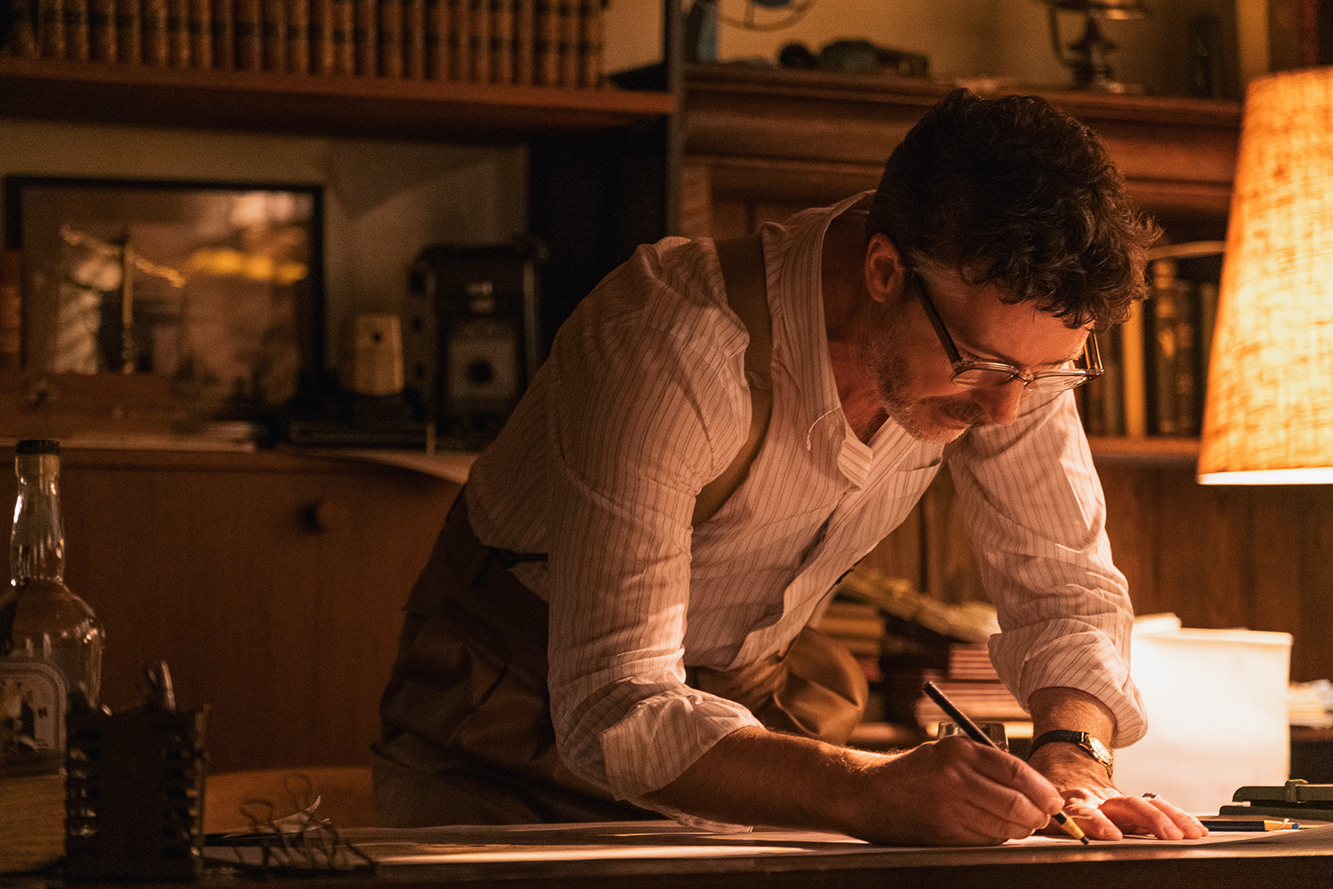 The flame has been rekindled. It’s time to go to Antarctica and reconnect with someone he didn’t think he’d see again – or want to see. In the end, he ends up in Chile – at Tierra Del Fuego, the last stop before Antarctica. There, he has tracked down William, the only person who can help him “find someone.” It looks like Hynek feels that Quinn may still be alive and that the key to it all lies in Antarctica. “He found them,” he tells William. “Now, it’s time to find Quinn.”

As he stands on an icebreaker, he seems to be invigorated by the realization that there’s more out there than anyone thought. He’s going to find Quinn because he believes he’s still alive. It’s exciting and will most certainly take Project Blue Book into a new direction for season 3 – and I’m counting on a season 3. Once again, the work done by Aidan Gillen and Michael Malarkey as Hynek and Quinn, respectively, has been a joy to watch, as has their friendship and loyalty.

It’s a testament to those two’s work that they have delivered this wonderful synergy over the last two seasons. I’m always curious about how much of each episode is factually part of the Project Blue Book record and how much is creative license. Where does the search for Quinn belong in this question?

Similar props are worth noting for Michael Harney and Neal McDonough for their roles as generals Valentine and Harding, respectfully. This whole cast offers wonderful creativity and storytelling in a realm where it might come off as cheesy or forced. I haven’t felt that vibe once, which is a tribute to the writing, directing and acting that’s going on within Project Blue Book.