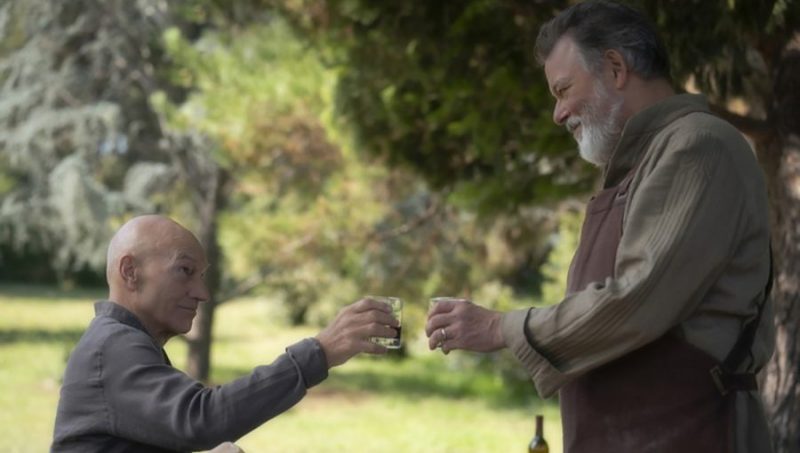 Man, there’s just something kind of magical seeing old faces re-emerge in new shows. Yes, they are playing the same characters we remember from ‘back in the day,’ but they are older, wiser, more grounded and like so many characters in Star Trek: Picard, carrying pain and sorrow with them. And so it was in this episode of Picard (107), titled Nepenthe, where we finally get to enjoy another moment of nostalgic glory.

Turns out, the planet Nepenthe is where William Riker (Jonathan Frakes) and Deanna Troi (Marina Sirtis) have made their home. And like Picard, Raffi and so many of the others we’ve met in this journey, they are dealing with their own kind of pain. A son, Thad, who by all accounts was a pretty special lad, died some years before, leaving a grieving mother, father and younger sister. There’s a fun little line later in the show when Jean-Luc is describing his new crew to his former first officer and notes they all have some kind of baggage they’re carrying around.

What’s funny about that is that it seems just about every major player in this space drama that we meet is carrying around some level of baggage. He not only is Picard shipping out with a motley crew of people struggling with their own pains, he seems to be running across old friends that are dealing with very similar circumstances. As I’ve written before, there’s a vibe to this show that is a little darker, a little sadder, a little more real-life – and I appreciate that. 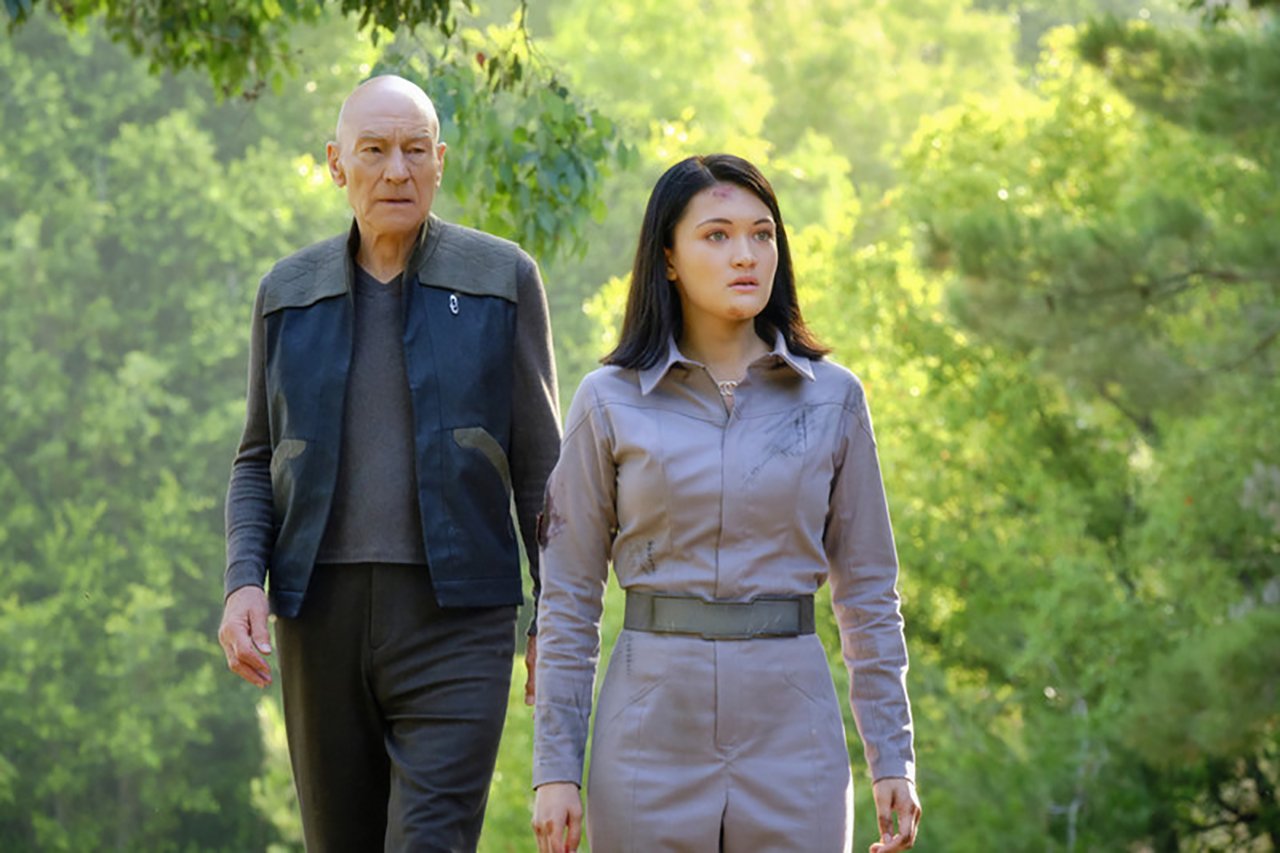 The intervening years for all of these characters have not been without pain, struggle and remorse – Picard chief among them. But that makes it real to me, not just some sci-fi fable where all is well and the problem of the week is solved. No, there’s grit with these characters, who have had to move along in life carrying various-sized emotional anvils that seem to permeate throughout their daily lives. I admit, it’s tough to watch sometimes. Raffi is a good example. The spiral continues even as she functions aboard ship.

So, before we roll on, here’s where I issue the SPOILER ALERT. If you haven’t seen episode 107 and don’t want to be SPOILED, don’t move ahead. If you’re good, let’s roll on, shall we?

Thanks to Hugh’s use of the queen’s transportation device aboard the Borg Cube, Picard and Soji arrive on the planet Nepenthe, where Picard knows that Troi and Riker have made their home. An interesting side note, Nepenthe is defined as “A potion used by the ancients to induce forgetfulness of pain or sorrow or something capable of causing oblivion of grief or suffering.”

As we see, that definition is quite appropriate for Troi and Riker, who continue to work through the loss of a son. The name of the planet, and the struggle the parents are having, is a nice little subtle touch to the episode. Jonathan Frakes and Marina Sirtis was both superb here. With just the right amount of pain hiding behind those smiles and joy at seeing Picard again. It was both exciting and and illuminating. Rich, rich storytelling there with some veterans who just slayed it scene to scene. 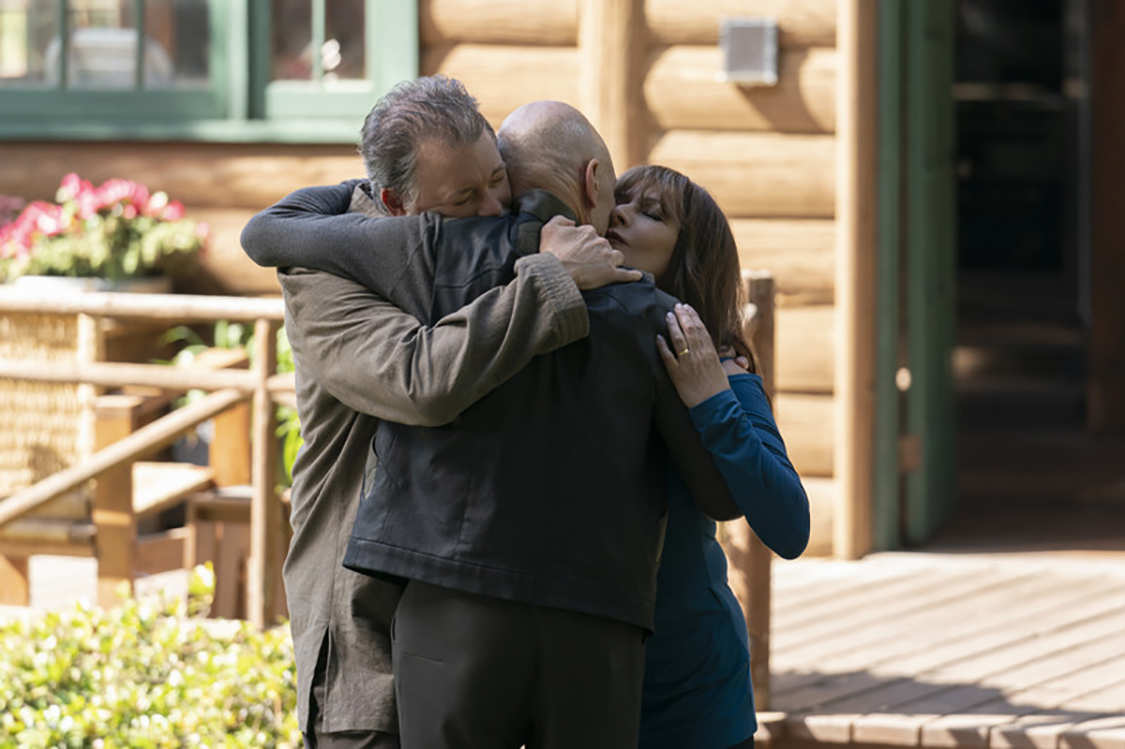 Fortunately, they still have a daughter, Kestra (Played superbly by Lulu Wilson) who is every bit as adventurous, intelligent, and inquisitive as you’d imagine. She’s something pretty special and is the instrument through which Soji may just start to heal a bit. It’s clear Soji’s experience with Narek has left her embittered. It’s also clear that her realization that it’s all been a lie leaves her hard-pressed to find anyone or anything to trust. And while she expresses those feelings several times, it is Kestra who ultimately tells her that she can trust Picard.

The hospitality and empathy on display with this family obviously touches a nerve in Soji, one she isn’t sure she should trust. And let’s face it, there’s something kind of quirkily special about watching Riker make homemade pizza in an outdoor brick oven, and Picard start to try and develop rudimentary parental skills.

Yes, the Rikers have chosen the quiet life to rest and heal from their own trauma, a trauma that should have been easily avoided, but for that synthetic ban. Turns out, some of the techniques for developing synthetics were the course of treatment Thad needed. Without it suddenly, he was doomed. Once again, the tentacles of the synth attack on Mars and subsequent synthetics band reaches into another life and creates sorrow. Very interesting development in that. 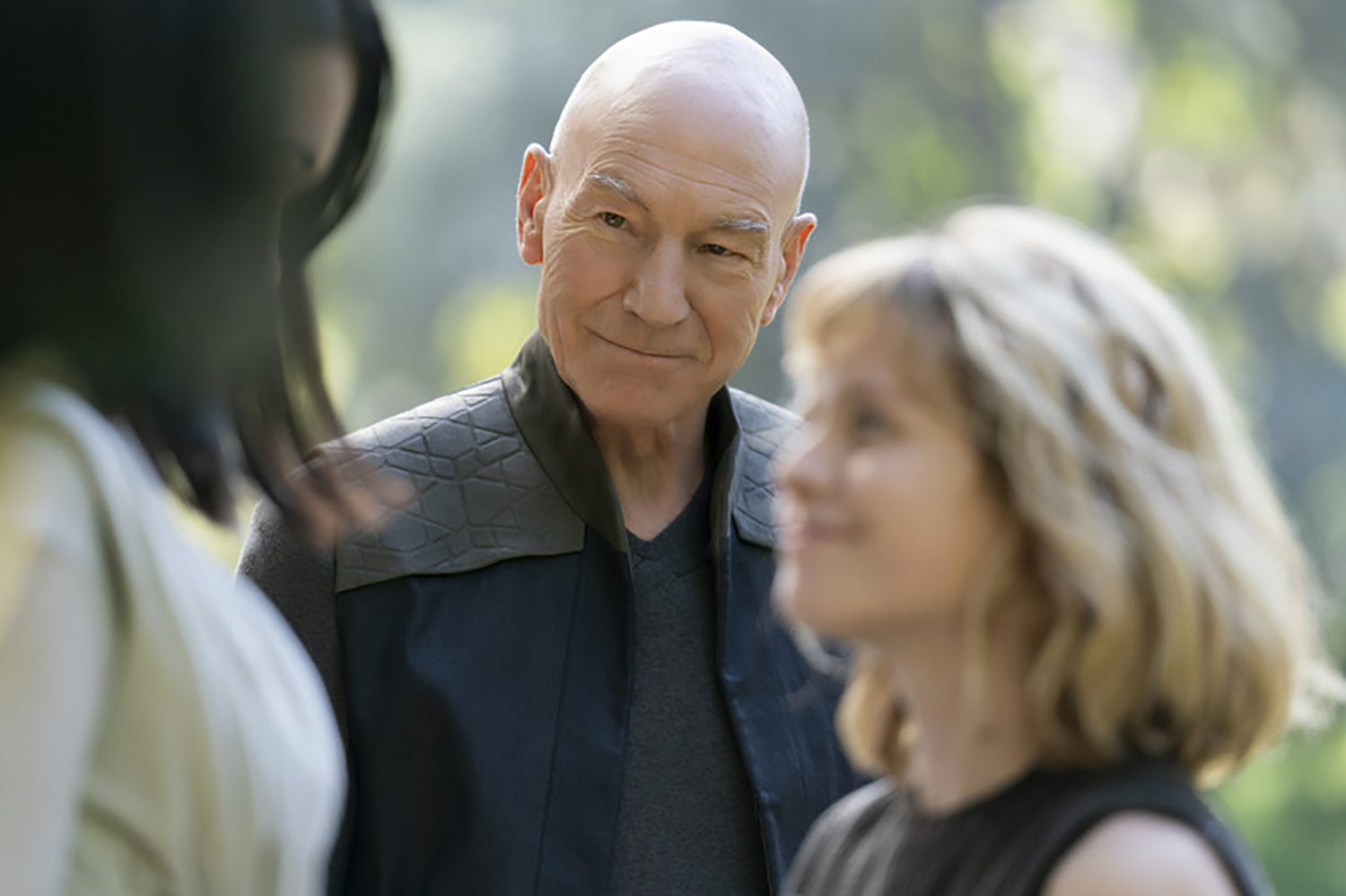 Another great moment is when Picard, reticent to draw Riker and Troi into the unfolding drama, has to sit there, wine glass in hand, and listen to his former No. 1 logically go through the clues and come up with a scenario that is very much like what is happening at the moment. It’s a moment that lets you know these two haven’t lost their collective intellectual mojo.

Riker can still bring the goods for his old captain. There’s a lot of love and compassion in this episode. And seeing these old friends, these old Star Trek: Next Generation companions together again was rich and gratifying. I appreciated every second of not only the storytelling, but the joy I felt at seeing them together again. So well done. I suspect the joy and tenderness at their reunion was a byproduct of these actors renewing their relationship. It clearly carries over to the screen.

In the end, the visit with the Rikers proved not only restorative from a rest and reassess standpoint, but also gave Soji the chance to slow down and start to reassess who is trustworthy. While she and Picard are sorting through a host of things on Nepenthe, Captain Rios, Raffi and Dr. Jurati are struggling to get away from the Borg Cube as they’ve been ensnared in a tractor beam. Rios and Raffi are doing their ship flying stuff with the proper air of exasperation and intensity, but Jurati is starting to demonstrate some real struggles emotionally. 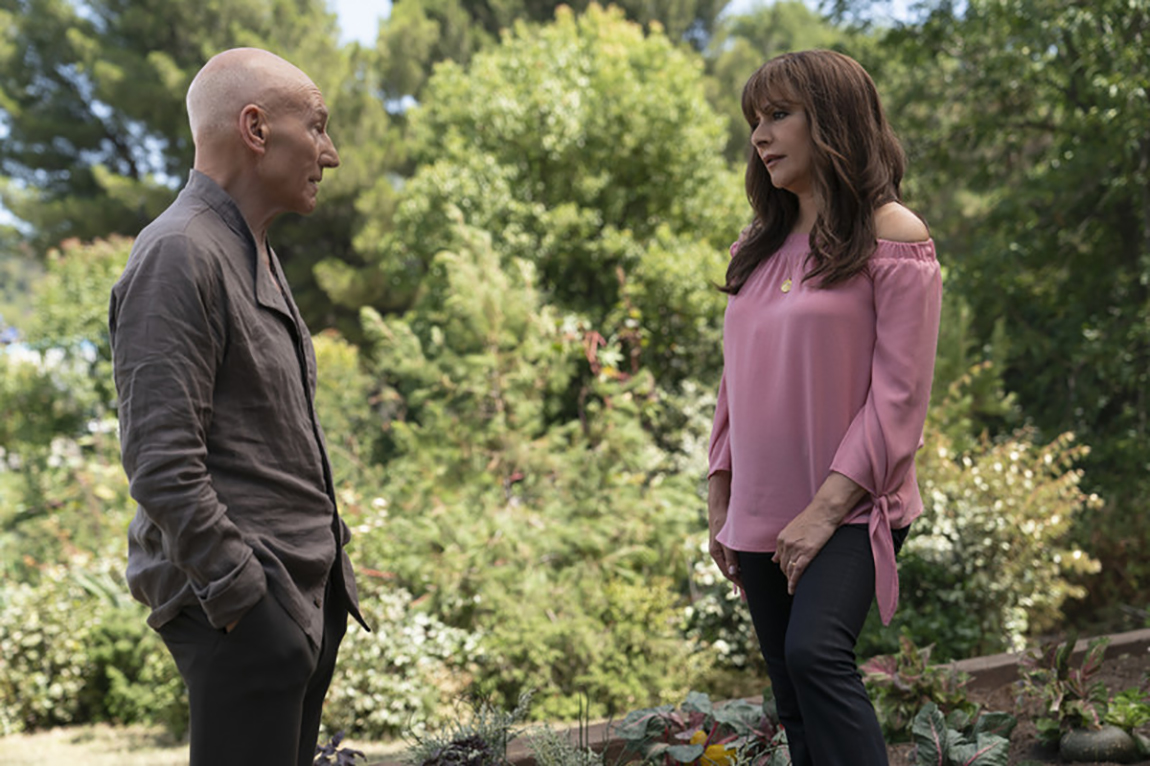 Again, I love backstory and we get a little of that when we’re taken back to the Daystrom Institute and the shadowy meeting between Commodore Oh and Jurati at lunch. Through a mind-meld with the admiral, Jurati is privy to a scene of death and destruction, a scene that is somehow directly related to synthetic technology. It also harkens back to when she killed Dr. Maddox and, through her tears, told him she wished he could see what she’s seen. Now, the question is has Jurati been somewhat manipulated by Oh and the Zhat Vash, or is this truly a foretelling of what is to come?

Regardless, the intensity of the situation, and the weight of what she is doing (remember the tracking device she chewed up) and has done is starting to take a heavy mental toll. I love her continued naivete when she suggests they just ask the Romulans to simply let them go. Raffi and Rios kind of give her a look of “what fairy tale do you think this is?” But she’s in a near panic state and I think Raffi knows something’s up. Later, it seems as though perhaps Rios, who first thought Raffi might be helping Narek track them, seems to come to a bit of a different realization as well.

We shall see how this plays out. Raffi tries to calm Jurati with the red velvet cake, but the good doctor ends up barfing all over the place. But that’s not all. I think guilt finally overwhelms her and she injects herself with something I suspect she believes will nullify the tracking ingredients Oh had her chew. Now, she’s lapsed into a coma. 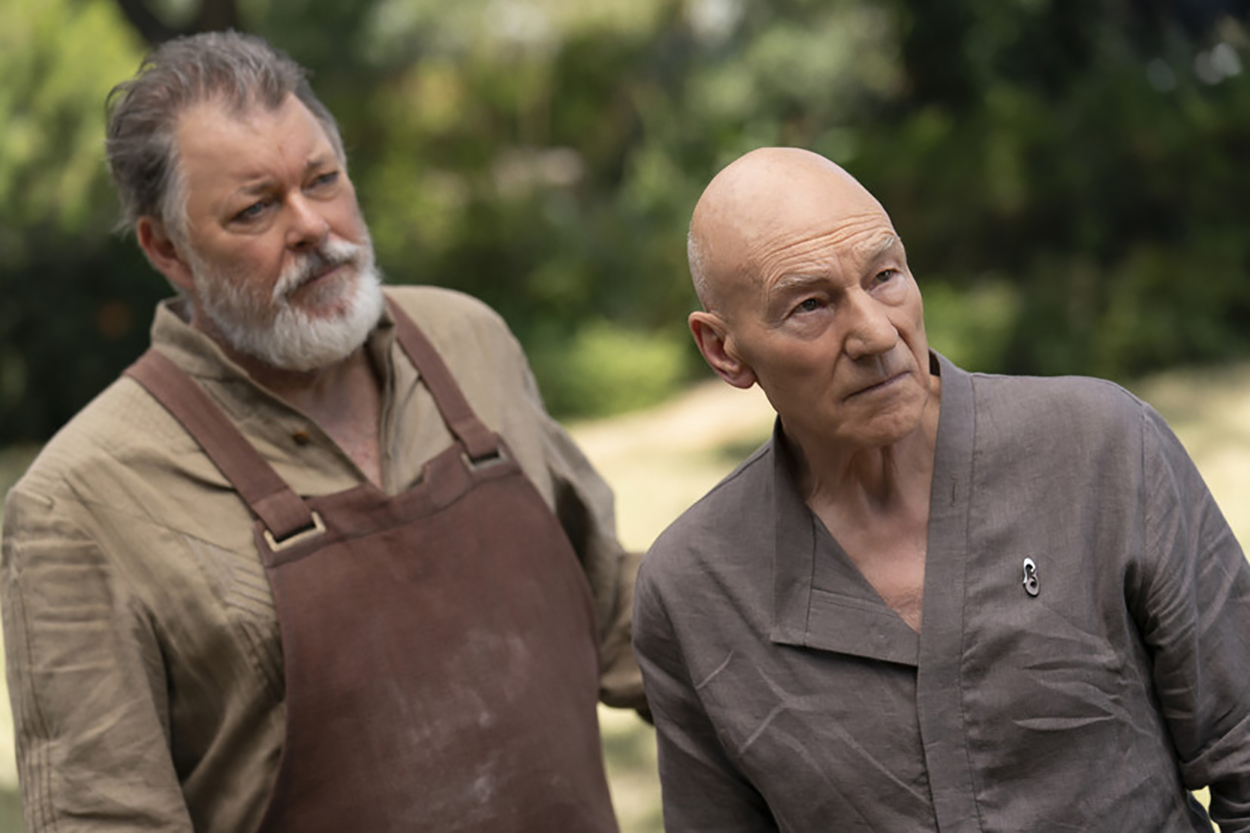 It will be interesting to see if the emotional and physical clues Jurati has left will bring Raffi and Rios to the inevitable conclusion that she is playing a much deeper and darker role in all of this than she let on. Or, should she regain consciousness, will she simply let it all spill out – a torrent of guilt and self-loathing laid bare before the La Sirena crew. And if the truth is out there, what will that mean for everyone? Trust is in short supply amongst our hearty crew and Jurati’s betrayal would certainly rank up there as a biggie.

However, from my vantage point, there is also pain and sorrow as we lose Hugh. Our evildoer Romulan, Narissa, is interrogating Hugh in the aftermath of Picard and Soji’s escape. Elnor, it would seem, has avoided capture. To make her point, she kills a host of XBs in front of Hugh, but lets him live as she doesn’t want to jeopardize the treaty with the Federation.

Fortunately, Elnor is not too concerned with that issue and flies in to rescue the former Borg. Sadly, we get a taste of Narissa’s considerable skills as she flings a short-blade knife into Hugh’s neck as he hides around the corner, then taunts Elnor a bit and beams out. Hugh dies in Elnor’s arms. It was so exciting to see the return of Hugh and the compassion he had for his fellow XBs. In a world that doesn’t look at him as human, he demonstrated great humanity within the reclamation project. 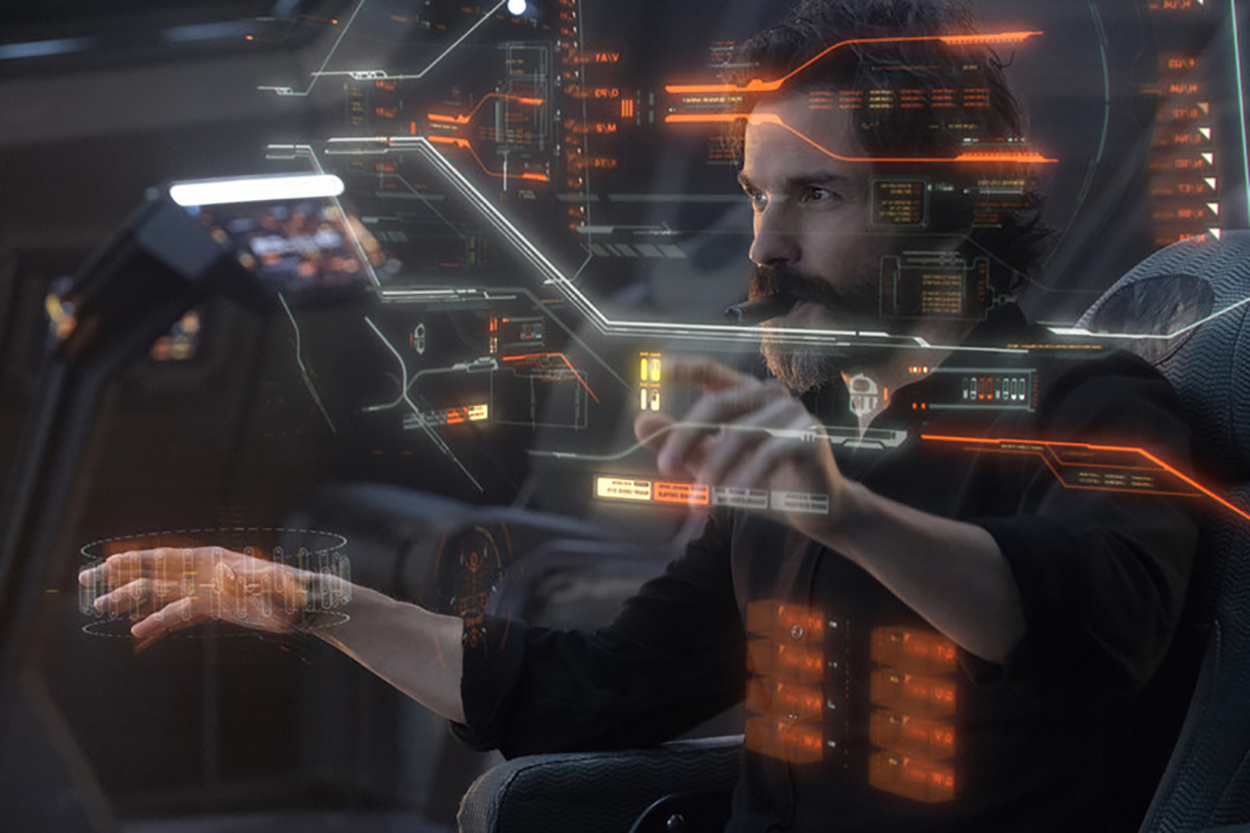 Jonathan Del Arco reprised this role in a way that was inspiring and well done. I am sorry to see him go out like this. My hope is Elnor, who lost Hugh on his watch, will wreak a little vengeance on the Zhat Vash. I look forward to it.

Star Trek: Picard is turning out to be something very special and different in the Star Trek pantheon. And while I keep reading about people who struggle with it, my experience with folks on social media is that this difference, this peek back while moving forward with characters that have a past in the Star Trek family, combined with a compelling story, has found a large audience and larger appreciation.

I think Patrick Stewart has been on-point from the outset as a much older man who comes to the humbling reality (o a consistent basis) that he is not the man he once was. Now, he’s simply trying to find bits and pieces of that man while he also navigates the world as a much older and more brittle man. I’ve loved his work in Picard. I think he’s a rock, even within that vulnerability. I love it. As we head to the homestretch of this inaugural season, I am encouraged by this show’s potential for more.