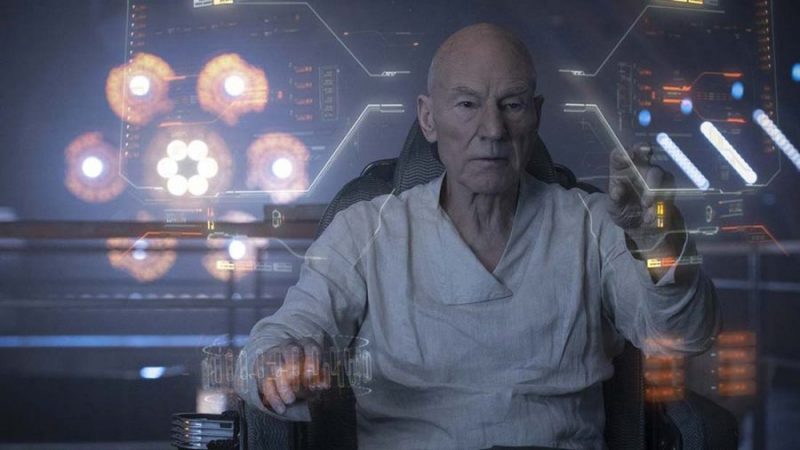 The world of Star Trek has always been about the search for our better angels, the walk of humanity and how that manifests itself when it bumps up against other life forms. In the season 1 finale of Star Trek: Picard, we are treated to so many warm and important moments – moments that took multiple characters in such significant directions and, ultimately, led to averting genocide of organic life forms in the galaxy.

It wasn’t easy and I’ll tell you right here that it was not without a few tears and emotions that surprised me. But I’m pretty sure I wasn’t alone in those feelings as this final episode delivered moments of redemption and important choices by a host of characters – as well as some baddies getting a nice glass of comeuppance. But trumping all of that was a magical moment between Picard and Data that feels like a destination we were headed toward all along.

I watch The Ready Room immediately after I see each week’s episode. The show, hosted by Wil Wheaton, is a wonderful collection of tidbits, actor interviews and wonderfully Trek-like thoughts. In this week’s episode, Patrick Stewart made the observation that we need Star Trek now. And in reflection, I couldn’t agree more. Star Trek: Picard is a wonderfully worthy sibling to those that have come before – yet isn’t like what’s come before. But Stewart’s words really sort of summed up this show for me – we needed it. And they delivered. 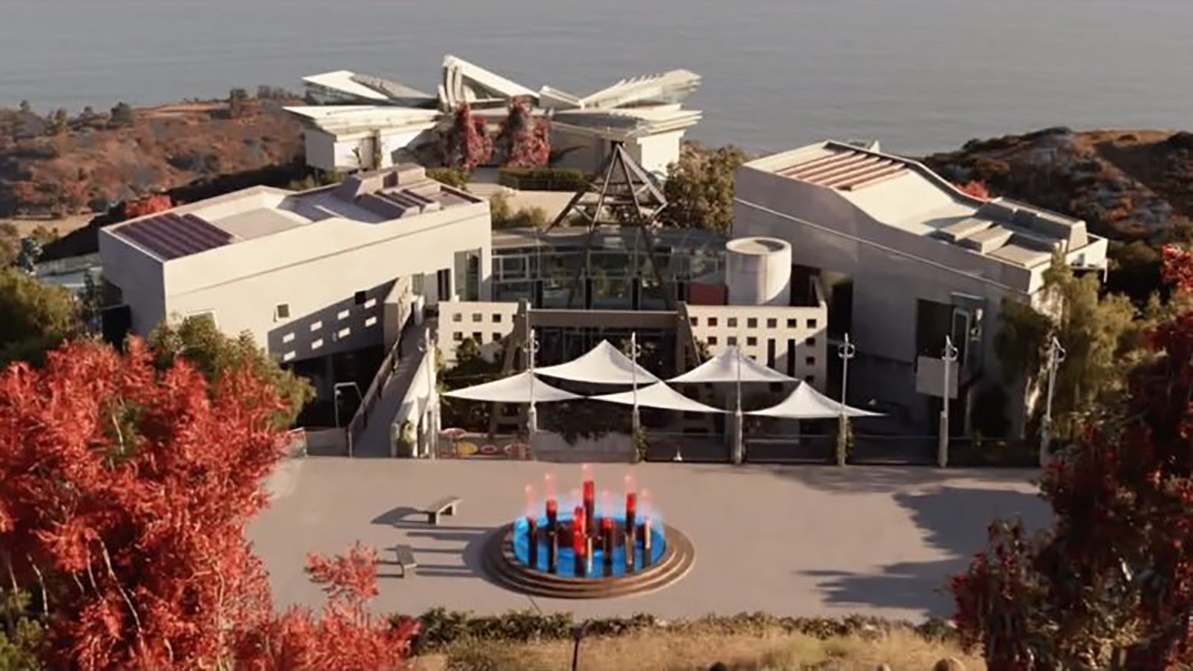 The synthetic compound on Coppellius in Star Trek: Picard on CBS All-Access.

The question of humanity – what makes it special – was given voice by Data as he sat with Picard in a simulation that was ostensibly our good captain’s final moments of life. And in that moment, we learned that Jean-Luc Picard was not going to die, and that Data’s quest to be human-like could only be fulfilled completely and satisfactorily if he were to die. Death, he reasoned, was what gave humanity it’s life. Without death, then life really isn’t life, he said.

An interesting moment and I’ll confess that watching Patrick Stewart and Brent Spiner deliver Picard and Data again, in that context, was thrilling. Two actors who had crawled back into these characters 20 years later and still broke important, heartfelt ground for them. It was marvelous, poignant and emotional as we welcomed Picard back while saying goodbye to the last shred of Data.

Wow, so damn good. So incredibly riddled with emotion and context. I had to watch it again immediately to simply let the work of Spiner and Stewart wash over me. It was scintillating on many levels and left us with a wonderful responsibility on Picard’s shoulders. His life was saved via the bio-synthetic creation that Soong and Dr. Jurati were trying to complete. In the end, Soong was willing to lose that Picard might win. It was an important moment from a man that Picard admitted he didn’t especially like. 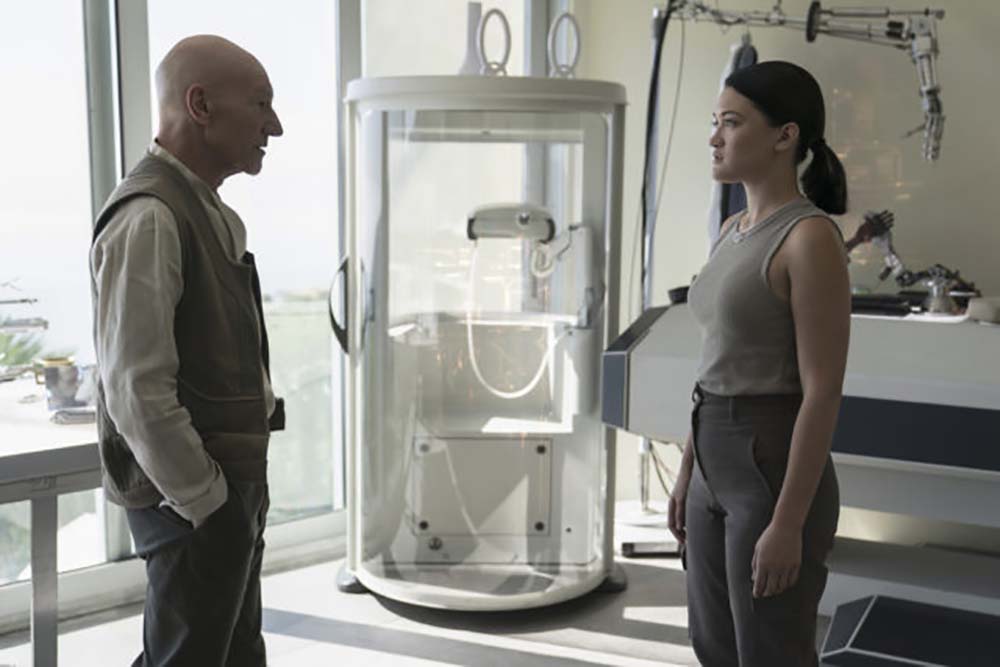 But, it also now places Picard in that rare position of being able to walk in the footsteps of those he’s advocated for. Picard is now a synthetic and he can “walk the walk” in a very real way for synthetic life forms. We shall see if the talk will be backed up by a walk that advocates for the synths, something he’ll get a chance to do now that we learn the synth ban has been lifted. So, redemption for Soong and Jurati, right?

Obviously, “the destroyer” didn’t summon the entities that would raze the galaxy. She came close, but in the end Sutra (Soong’s comment to her that she was just like us was a nice little moment) was found out and Soji was moved by Picard and Jurati’s willingness to stand their ground against the Romulan horde that was going to scorch the planet. It was, as Picard had hoped, a teachable moment and one that Soji and her people learned from. It offered her a choice and seeing organics willing to die for her people – she made the right choice. Turn that transmitter off. Redemption for Soji.

I was happy to see Jurati find some healing in this episode as she busts Picard out of his room, assists him in making a stand against the Romulans in La Sirena, and finally helping to revive Picard in the synthetic body her lover Bruce Maddox had helped create. It has been a long, long, struggle of a road for Dr. Agnes Jurati, but when the final bell rang, she got up off the canvass and made magic happen – multiple times.

I’ve struggled with Jurati this season, but have found Alison Pill to be quite the revelation as an actor. She just creates a character that has been torn asunder emotionally and, finally, found a way to rebuild herself in several selfless acts. It has been amazing to watch Pill’s work here. 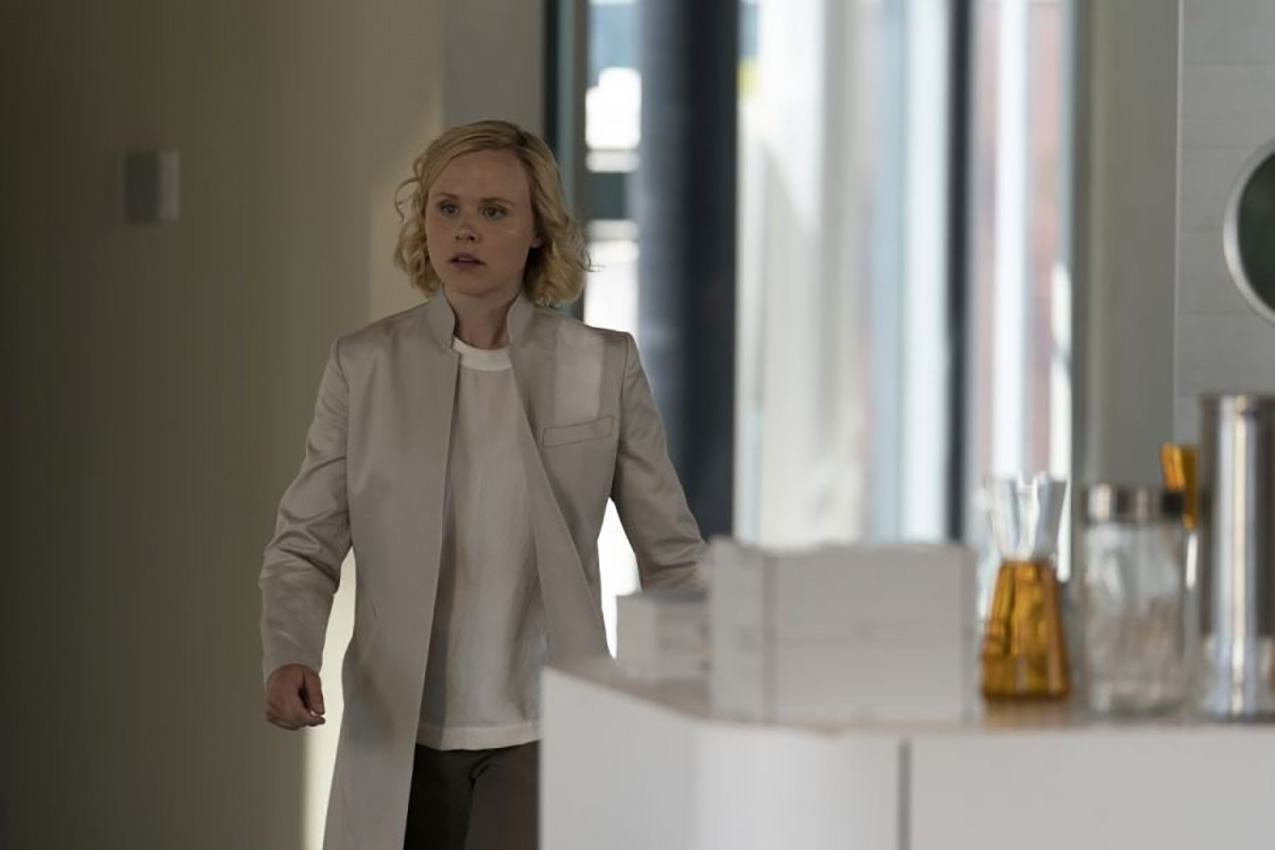 You’ve seen the episode. Sutra is found out, Captain Rios, Raffi, Elnor and the enigmatic Narek devise a plan to get into the compound and destroy the transmitter. It was a mission that took trust, guts and loyalty, another set of characteristics that are very Star Trek in their nature.

In your heart, you know that Picard and his compatriots are going to somehow stop Armegeddon from arriving. We understand that’s going to happen, but it’s this march toward understanding the errors of marginalizing those who are different than we are, and the fear that takes hold in those moments, that’s so interesting. Walking down that road throughout the season has been a fascinating look at not only these characters, but ourselves.

In the end, the crises of organic survival has been overcome. We get to see Narek find some level of redemption, as well as Seven of Nine and Narissa get into a very nice fight aboard the Borg cube. That’s right, Narissa didn’t beam out of the cube when accosted by XBs, she transported herself to another part of the cube and has been hiding out there – until Seven tracks her down and tosses her – Darth Vader-like – down a very deep and dark shaft in the cube – well, kicks her really. 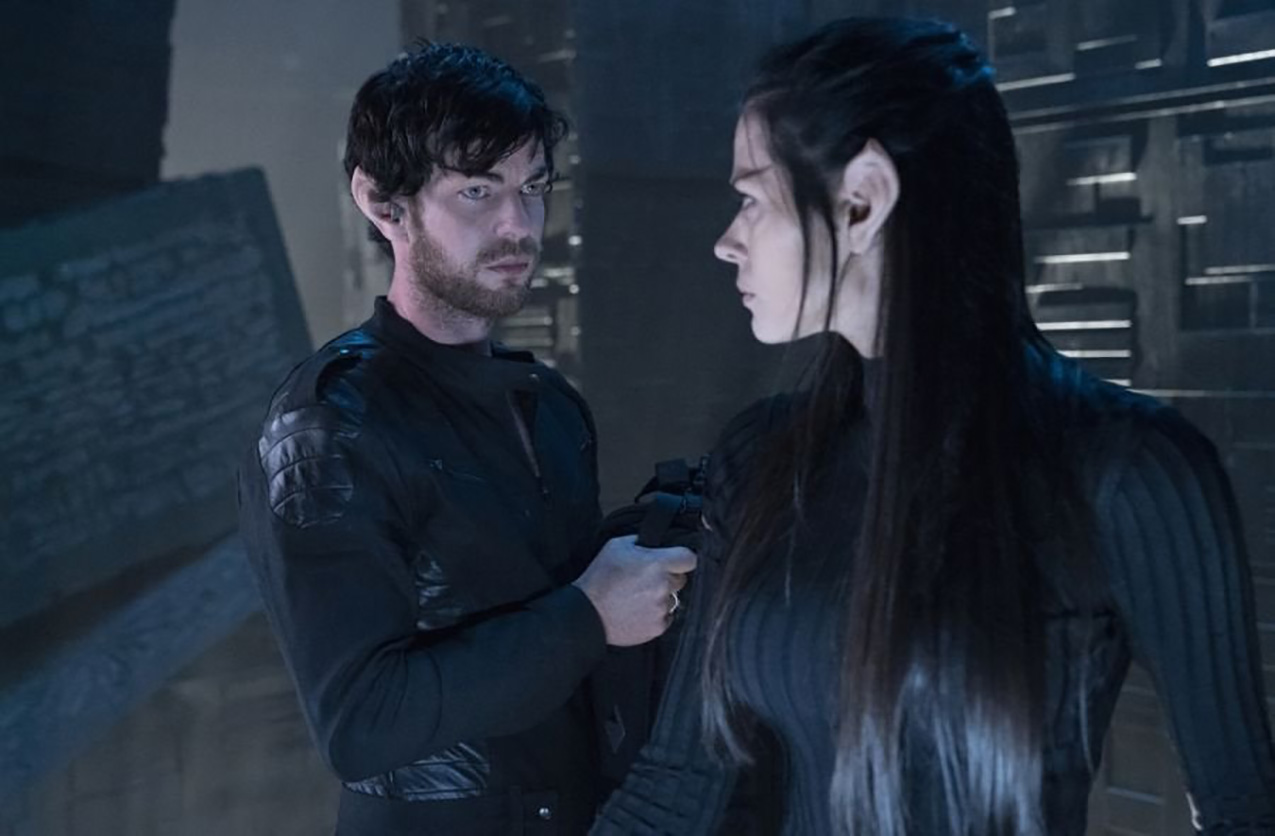 Harry Treadaway as the Romulan Narek and his sister, Narissa aboard the damaged Borg cube in Star Trek: Picard on CBS All-Access.

And in the end, with the threat gone, Picard with a synthetic second lease on life (though it’s interesting to note the new body will continue to age), and his motley crew apparently in place, we can start thinking about what season 2 might look like. Now that Picard has graced the heavens with his presence, do we really think he’s likely to go back to the vineyard? Let’s face it, this adventure was heady stuff for a man who used to do this kind of stuff before breakfast most days.

We learned a lot about these characters in 10 episodes and we enjoyed some wonderful call-backs to previous Treks. In this episode alone we got the hear “make it so” and “engage,” the first uttered by Jurati and the second by Picard himself as his motley crew headed out on a new adventure. But one of the things I’ve enjoyed about Star Trek: Picard is that those call-backs haven’t been gratuitous.

There’s been these snippets of odes to the past throughout the course of the show, but they’ve come naturally – at least I felt they were natural, not forced in just as fan service. Riker showing up in uniform as captain of the vanguard of Star Fleet ships to meet the Romulans above the synths home world seemed wonderfully apropos, as did his command of the situation as he faced down Oh aboard the Romulan ship. It was good, it was pure in the finest sense of fan service. I’ll be honest, I loved seeing pizza-making Riker call down the thunder from the captain’s chair once again. Again, kind of an emotional moment.

Season 1 of Star Trek: Picard was a very good, very gripping initial offering of this show. I loved the idea of Picard yielding to the march of time and the recognition of people he let down and hurt as he retreated into his own self-pitying shell when he resigned from Star Fleet. Having him be quite the opposite of the strong, confident, driven captain that we’d known 20 years ago was a nice touch and produced a humanity in him that certainly paved the way for our exploration of what it means to be human – the good and bad.