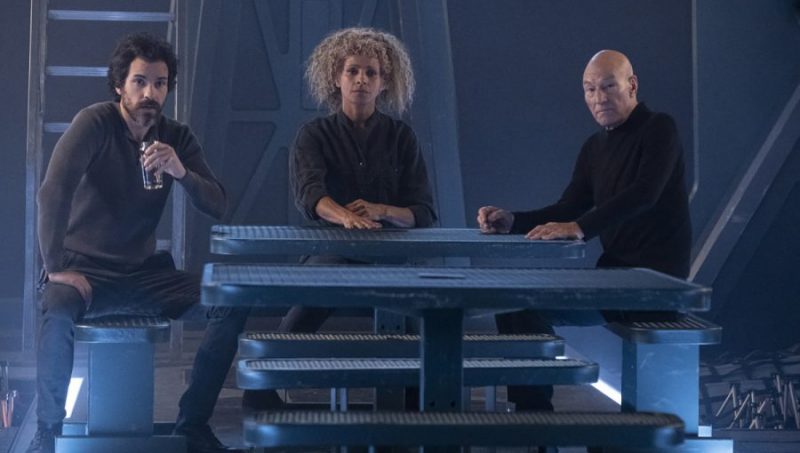 And so, the multiple threads that have been flapping in the wind are starting to bind, creating quite an interesting tapestry of a story on Star Trek: Picard. In this, the eighth episode, titled “Broken Pieces,” the story of Soji, the synths, Mars, Zhat Vash, and even Captain Rios, gains much more clarity. For what it’s worth, I think this has been my favorite episode overall of the first season.

I love backstory and we got plenty of that in this one, as well as a glimpse at what the future could bring and why it terrifies so many people – including Dr. Agnes Jurati, who I admit to feeling a great deal of empathy for. Yes, she survives, and there will be a penance she’ll need to pay for what she’s done. But in the end, as she cried tears of regret and terror, I just couldn’t bring myself to loathe her. I have to feel there’s redemption in her future, you know.

But before we get into specifics, I feel it only fair to warn you that this is your official SPOILER ALERT. That’s right, there are SPOILERS ahead, so tread cautiously from here on out. SPOILER resistance if futile. 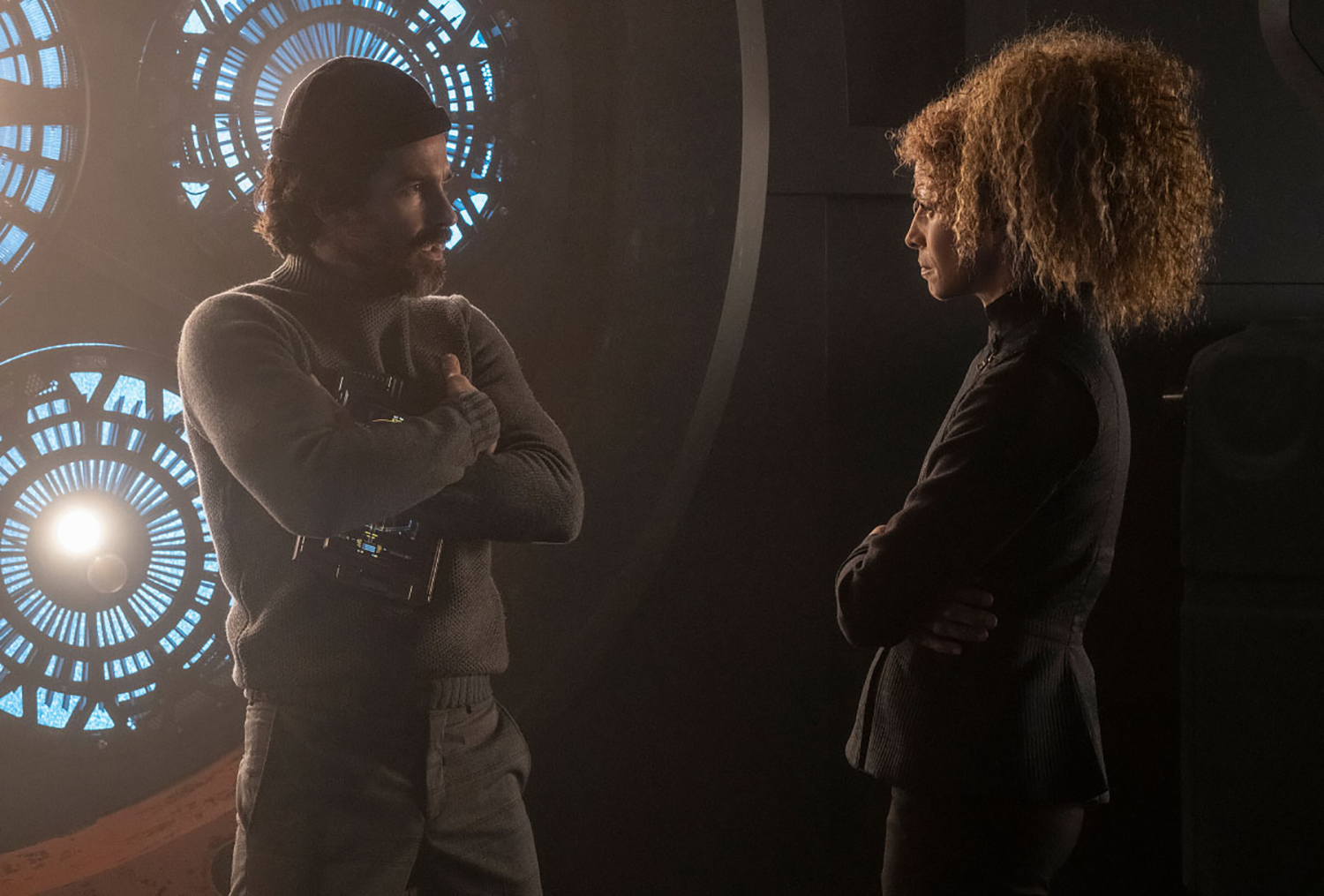 Now, where to start, where to start? Well, we learn that Admiral Oh is, indeed, part of Zhat Vash and even led groups through what is termed, the “admonition.” A ritual that shows the initiates the terrors that are to come via synths rising up to a new level of consciousness. Apparently, it happened once before, many hundreds of centuries before, and the Zhat Vash are dedicated to stopping it from arriving again. The vision the initiates see is so terrifying that it drives many mad. But, we also learn that our cold-hearted Romulan Narissa was able to handle it. Surprisingly, we also learn that Ramdha is Narrissa’s aunt.

An interesting revelation that leads us to a hospital room where we see tenderness and empathy from Narissa toward her aunt, who is still unconscious from her run-in with Soji earlier. I admit, the tender moment threw me off a bit. This seemingly cold, calculating operative of Zhat Vash could care, could feel and demonstrate a love for others. Weird, that. But I enjoyed it. Got to laud the work of Peyton List as Narissa. She really puts a fine gloss on this character in terms of intense coldness and devotion to the task at hand, then showing us some tenderness that is unexpected. A wonderful bit of work from Peyton.

As we get that little snippet of fun in the episode’s first few minutes, we find out a little more about Captain Rios and his past when he glimpses Soji. Turns out, he’s seen her before and that meeting led to something terrible – including the ultimately tragic self-inflicted death of his own father figure, Captain Vandermere. Turns out, years ago his ship made first contact with two emissaries. 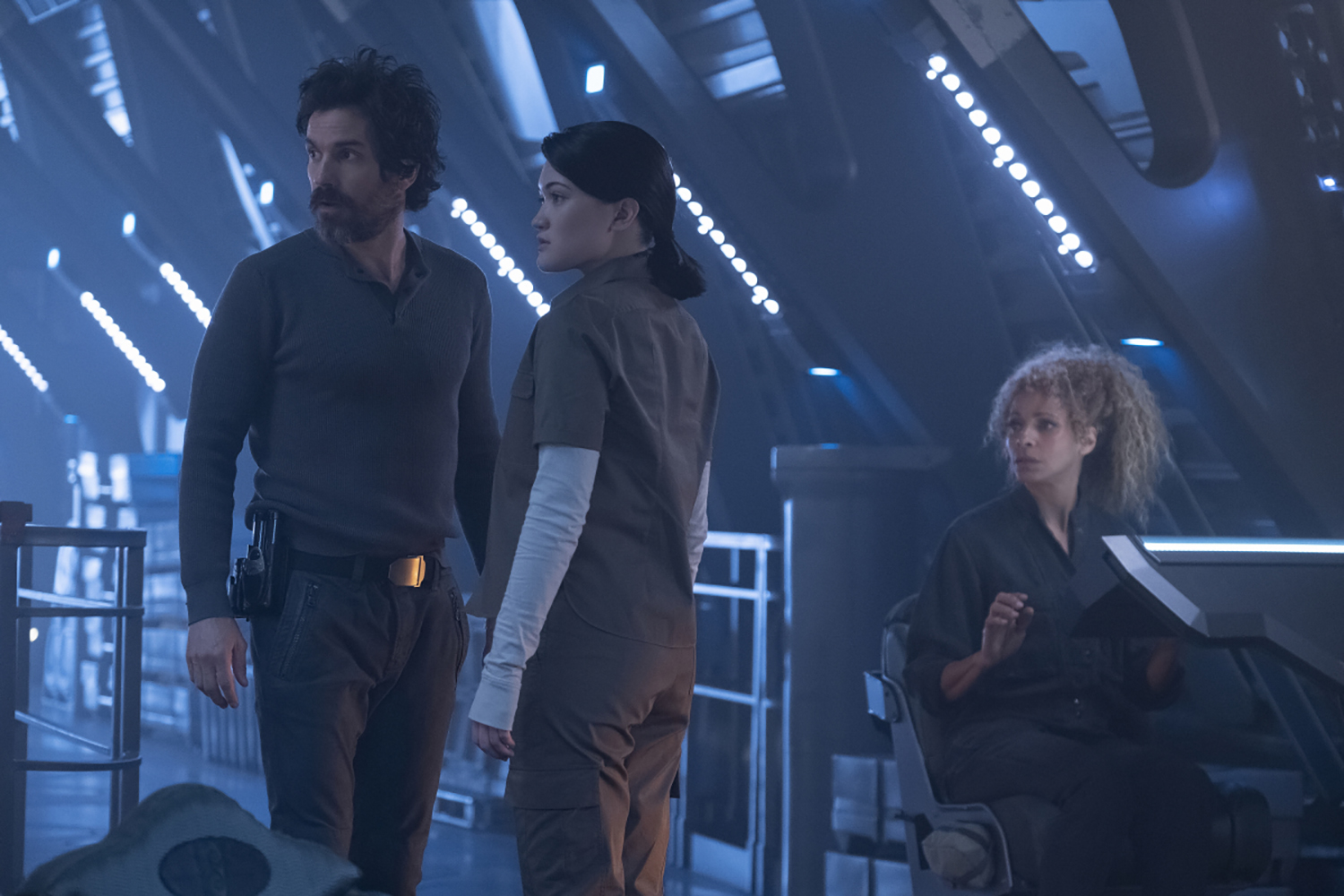 And what followed has haunted Rios since – Oh had ordered Vandermere to kill the ambassadors and in the aftermath, with Rios coming at him hard, Vandermere put a phaser in his mouth and blew his brains all over the bulkheads. The ambassadors were synths, created by Bruce Maddox on the planet he’d fled to when he left the Daystrom Institute. The plot certainly thickens at this point, doesn’t it?

Rios, it turns out, helped cover it all up and within six months of the incident was out of Star Fleet. I thought Rios’ self-imposed isolation after meeting Soji, and his walk down memory lane, were important parts of telling his story. The pencil drawing of the emissaries from back in the day with Soji’s face on it was a terrific little tidbit that solidified the whole arc. Rios has been a fascinating character for me from the beginning and those different versions of himself via the EMH’s on-board was fascinating to experience in this one.

As with just about everyone on this show, Rios has a nice closet full of pain that he’s trying to work through. Soji’s arrival triggered the memories and, thanks to some timely intervention from Raffi, some healing (we hope). Santiago Cabrera (loved him in Salvation) does a wonderful job of conveying a man who feeds on cynicism and isolation, but can’t quite subjugate the pain that has led him to his current path. The pained lone wolf still feels things. Perhaps, just perhaps, Soji will be the key element that helps him find his way back emotionally. It was a powerful look at his past and I reveled in it. 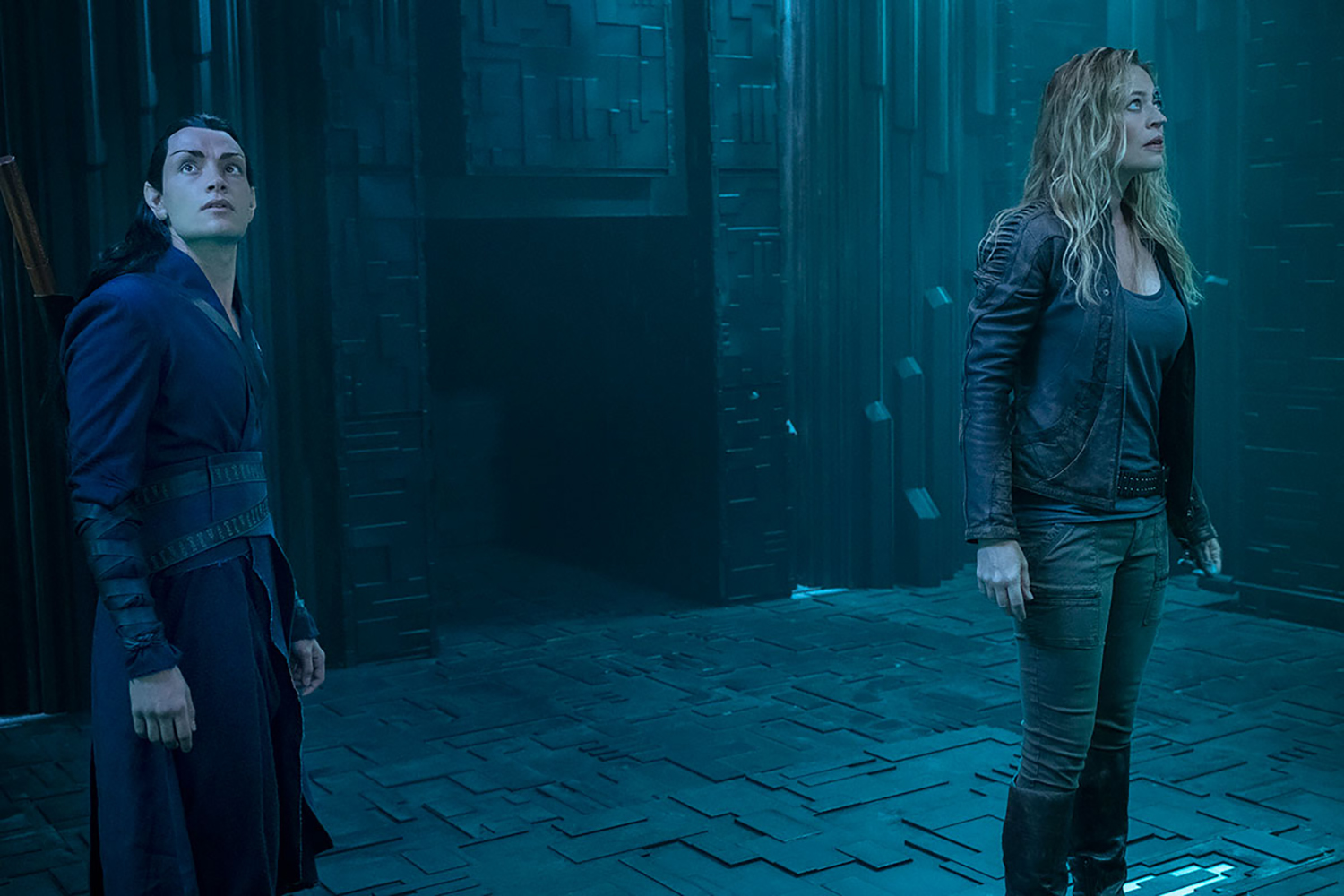 And it was good to see Raffi start to climb out of her hole .. again. Getting all five of the Rios EMH’s together and using them to help piece the puzzle of Soji’s impact on Rios was a lot of fun. Again, Cabrera demonstrates a lot of skill and subtle magic embuing all five characters with so much distinctiveness that there’s no distraction there. It’s fun, it’s impactful and it also gave us a chance to see just how sharp Raffi is when she’s on her game (and off the sauce and weed).

She pieces a lot of the Rios puzzle together, then he fills in the blanks about how it all relates to each other. Raffi and Rios are two characters that obviously care a great deal for each other in their own broken way. They “get” the other and within that understanding they’ve built a bond. We see the strength and power of that bond right here.

So there we have it, pieces of the puzzle coming together, the tapestry being weaved and it’s fascinating. Soji is finding her voice and her power, the prophecy of “the destroyer” is part of her and a potential “nest” of other synthetics. The Zhat Vash is on the way to the same world looking to destroy her home, even as she gains the help of the La Sirena crew to make the same trek. Isa Briones has really taken Soji (and Dahj) through quite the rollercoaster road in terms of development. 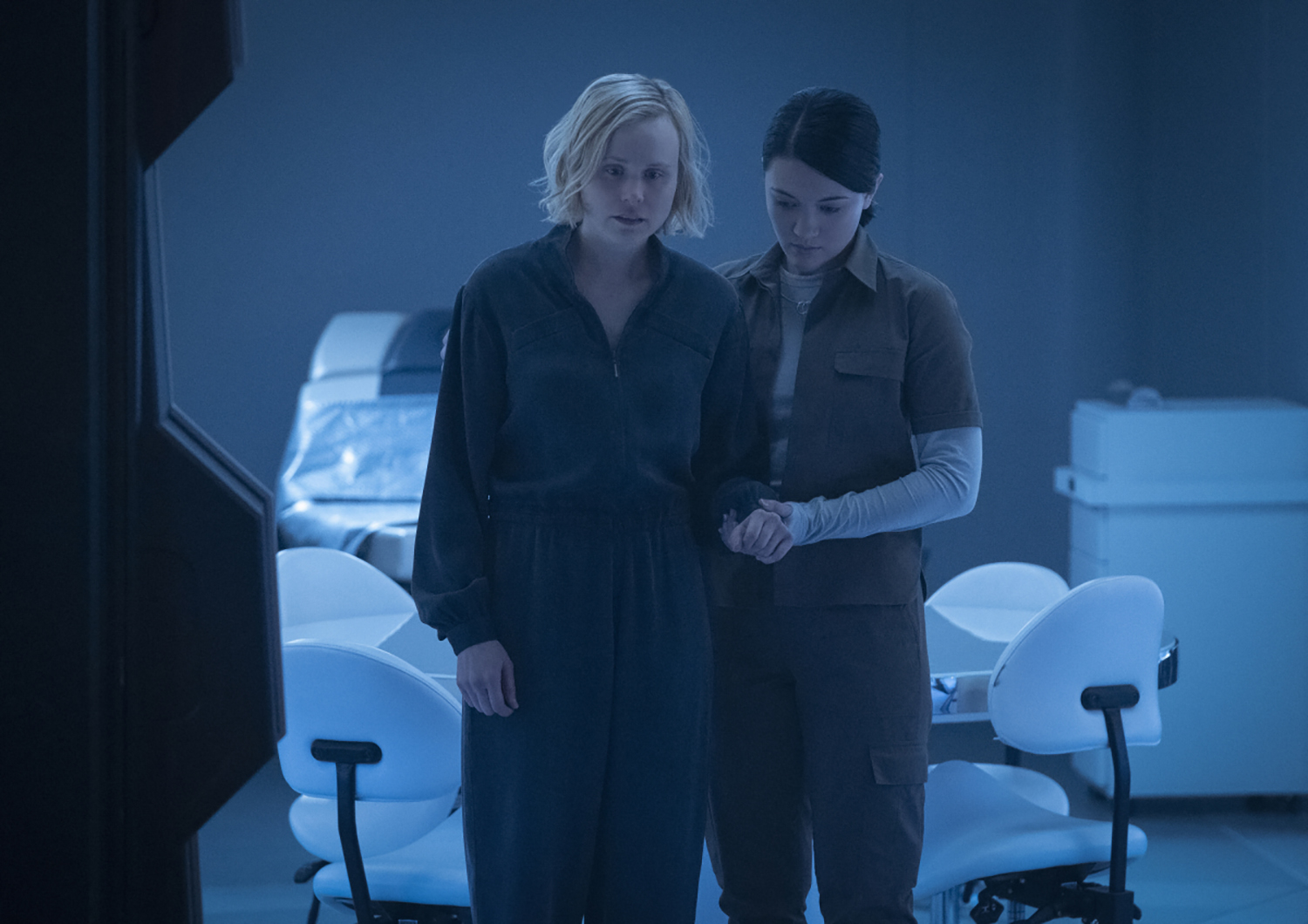 She’s growing in terms of her own sense of self, as well as these triggers that allow her to tap into more of what’s stored in her memory banks. She poses the question of whether she’s real to Jurati, which reminded me of the TNG episode where that question was raise regarding Data. The innocence is vanishing and there’s an element of danger with Soji now, though it isn’t malicious.

I think Picard makes an interesting point here regarding the “destroyer” prophecy. He notes that the devastation of the past does not necessarily mean that destruction in the future is guaranteed. He says that the future is still to “be written.” I think it’s a powerful and prophetic statement of hope and potential, something that Star Trek has always been so much about. It’s powerful stuff, really.

With all this going on aboard La Sirena, we still have Elnor on the Borg Cube being pursued by Narissa and her henchmen. Hugh, before he died, had given Elnor a Ranger medallion of sorts that he has activated. It also appears that the Zhat Vash have their own elite warriors and when they come to blows with Elnor, all hell breaks loose. About to be captured, a disruptor shatters the sounds of battle and we see Seven of Nine firing as she comes into the room. Gad, does she make those entrances count, right? 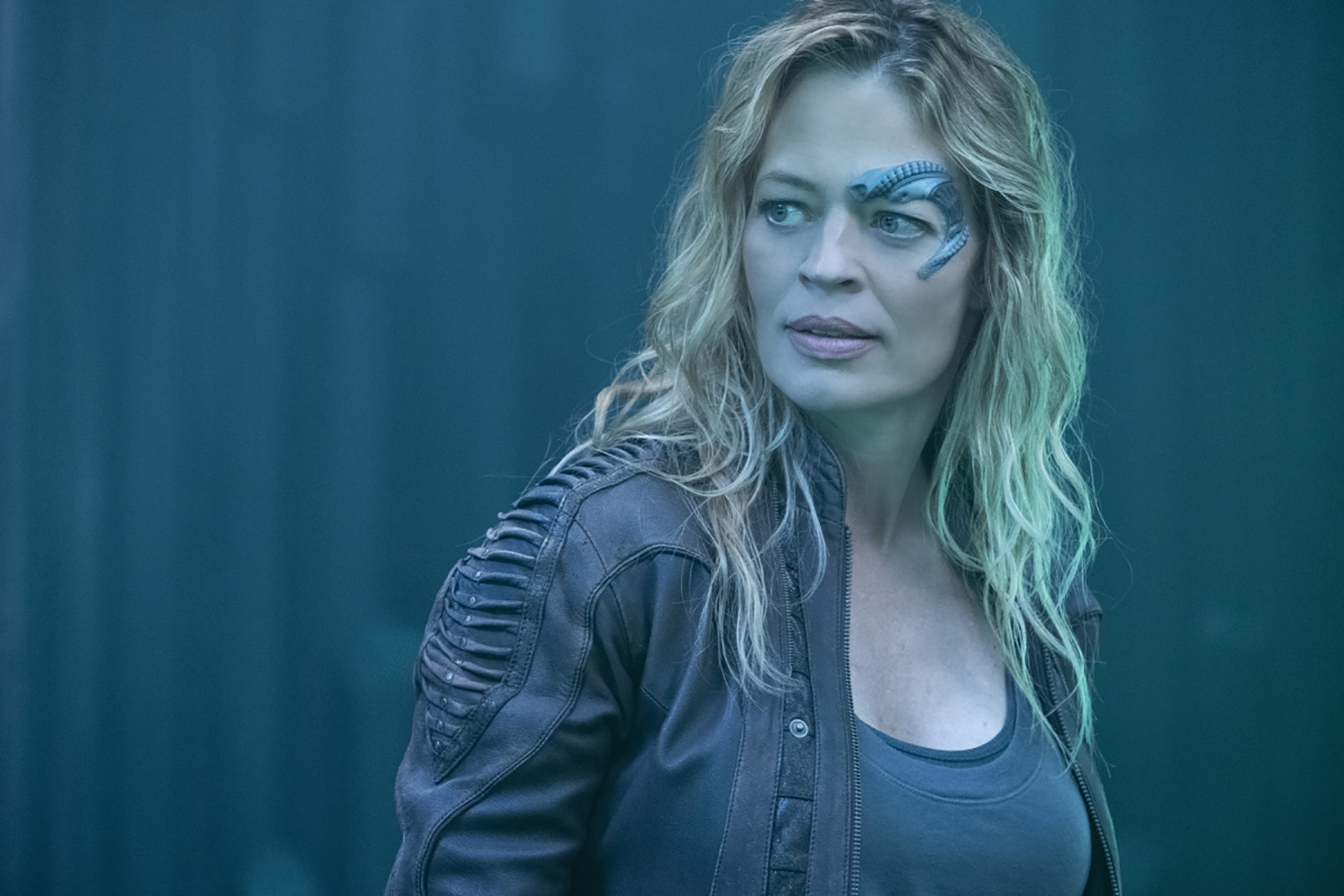 She wants to know where Hugh is and that leads us to believe that Hugh and Seven have been in contact all these years. Elnor is so wonderfully young and innocent. He gives Seven a big hug when she saves him and she struggles to know what to do. Later, when they are in the “queen’s chamber,” he’s up for any idea Seven throws out there. He’s naively innocent of the damage or potential damage her ideas have, urging her to go ahead and do it. Fortunately, she’s got a more level head on her and weighs the consequences he doesn’t fathom.

It’s funny and reminds us that he’s a relative newcomer to the battles that Seven, Picard, Rios and Raffi have had to wage inside and out. It’s fun, but also a reminder that some of the things that must be done aren’t pleasant. Elnor isn’t quite to that jaded mindset yet. For him, despite his impressive battle skills, it’s still a big, new world out there and wonder aplenty. Seven is quite the wonder.

Seven demonstrates that succinctly when she unleashes the little creatures that will repair the Borg cube, then allows herself to be taken back into the collective as she attempts to save the XBs and others in stasis. Narissa is killing the XBs and plans to space those who haven’t been reclaimed yet. It’s pretty wild to see Seven return to the collective mindset for a bit, that low voice booming in the cadence of the Borg. It was kind of ominous and threatening. 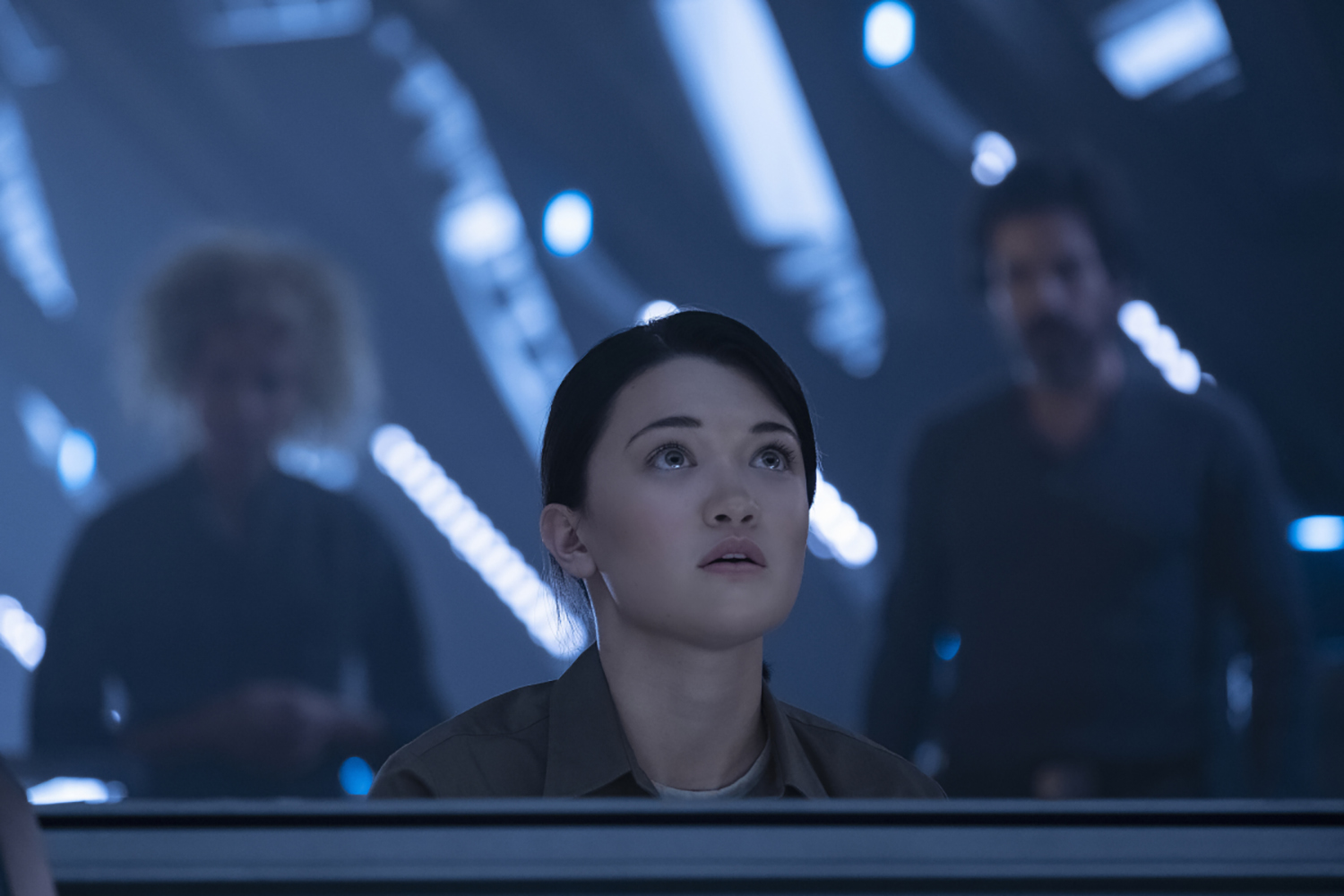 I feared for her in that moment, that she was unleashing the Borg again right there and then. Again, Elnor has a fun moment when he innocently asks if she’s going to assimilate him now. He’s informed that Annika still has things to do as she’s released from the Borg tendrils that had implanted themselves in her back. Jeri Ryan is so damn good as Seven. Man, she was firing on all cylinders here and I have to think she and Elnor would make quite the duo. We’ll see if that takes shape.

So what does it mean? Seven has reconnected with the collective, or at least reconnected it within this ship, a ship that has eliminated all the Borg on board, but is being repaired. Narissa is off with her armada to find the Synth nest and destroy it, while Soji and La Sirena are inbound as well. Should be some fun fireworks when this all comes to fruition.

And what of Picard’s heated talk with Admiral Clancy. Ah, that had to be satisfying to rub her nose in the reality of the situation. So, there’s a fleet of Star Fleet ships also headed into this little adventure. Again, that should be fun, right. Star Trek: Picard is racing toward the end of its first season and I think it’s been fantastic. It’s familiar faces put in unfamiliar situations dealing with being older, yet reminding us of familiar things we have always loved about these people. Add in the new characters and this wonderfully fun storyline and I think this is a winner. I’ve enjoyed it tremendously. With two weeks to go, I’m ready to be amazed.