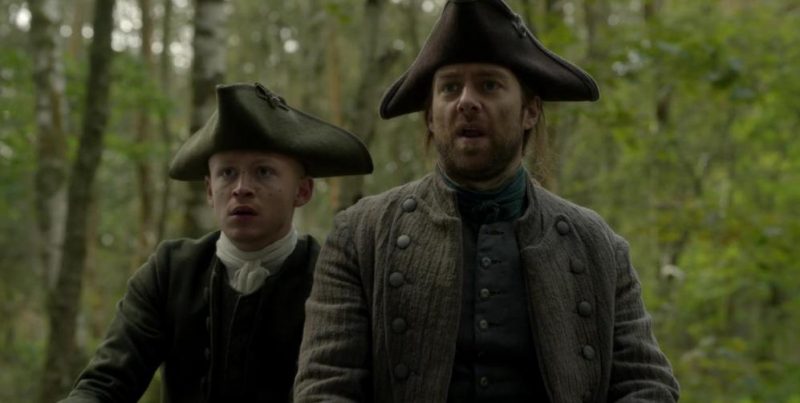 Throughout the nearly five seasons of Outlander so far, we’ve seen a good number of changes from the original book material. Many have been terrific, some have been interesting or head-scratching, some so egregious that even Diana Gabaldon has spoken up. We had been warned that this season would include some storylines from book 6, A Breath of Snow and Ashes. We’ve already been hit with one of them – Ian returns (and now we’ve gone two episodes without even mentioning the mystery of why). And this week, the episode slammed us into another major plot from that book. As much as you chant, Wizard of Oz style, “the book is the book and the show is the show,” I had a big problem with this one.

The Battle of Boring vs. Whaaat?

True, a good part of this week’s episode is definitely book related. Unfortunately, I didn’t feel satisfied by any of it. The battle of Wylie’s Landing, abbreviated (sadly, because there were some fun bits to it in the book), had a plot hole big enough to drive a four-horse carriage through – Ian as Alexander Malcolm? Bonnet has met him before, and not just for a how do you do. In the first episode of Season 4, Bonnet pops up in the middle of Jamie, Claire, Ian and Lesley trying to bury Hayes. He returns to the river boat, and it’s possible that he himself threatened Ian. Bonnet doesn’t seem to me to be the type of forget a face – and that could have tipped off the entire enterprise, with disastrous results. Ian played his role well – keeping Bonnet’s man from being too suspicious, and doing his part in the short fight that followed. But ultimately, this battle – discussed in more than one episode leading up to this one – was short and meaningless. 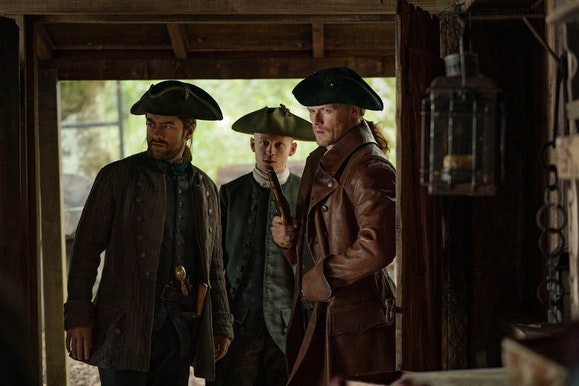 There was a nice glimpse into the growing relationship between Roger and Jamie – when Jamie said that if Roger falls, “I will avenge you.” And Roger says exactly the same thing back to him, showing his acceptance of the seriousness of the situation, and his understanding that pacifism doesn’t work in the 18th century. If it comes to it, can Roger actually kill someone? He wants to be the one to kill Bonnet – after all, as  he says to Jamie, Brianna may be Jamie’s daughter, but she’s Roger’s wife. Yes, Bonnet attacked Claire and killed Lesley, but the greatest insult was to Brianna, and therefore Roger has the right to avenge his wife. But can he? Fortunately, he doesn’t need to find out. 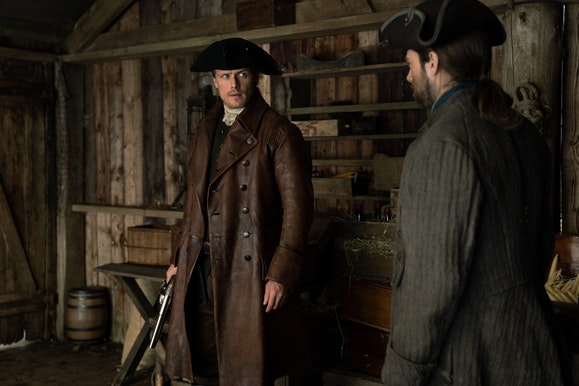 Gerald Forbes has been a weaselly, slimy little character. Aren’t you glad you never finished his proposal to Brianna? I did like the scenes, in this and in previous episodes, of him and Bonnet, where you can tell he’s walking on extra-fragile eggshells around Bonnet, who makes him quake like jelly with the slightest of looks. “You have a priest?” Seemingly innocuous, but – “I wouldn’t have thought that an amoral person like you would be worthy of or interested in having a personal priest, and what kind of man of the cloth would be within 20 feet of you?” 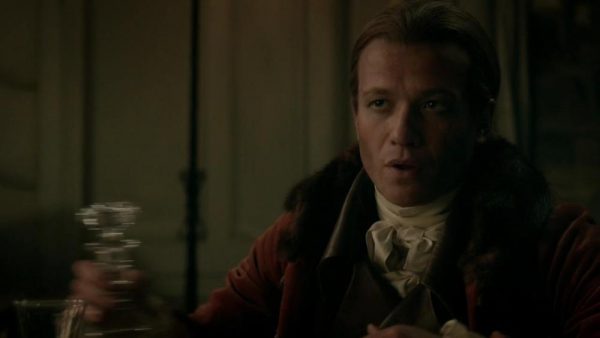 But the scene with Jocasta’s gift giving was forced and uncomfortable. “It should have been,” you’re thinking – sure, in that way. But it was uncomfortable for me in that 1) It’s nice of her, but I just can’t see Jocasta actually doing this; 2) we have no frame of reference for understanding how much this actually translates to that it would set Forbes off this badly; and 3) really? he’s going to snap and kill the woman? I didn’t get it at all. 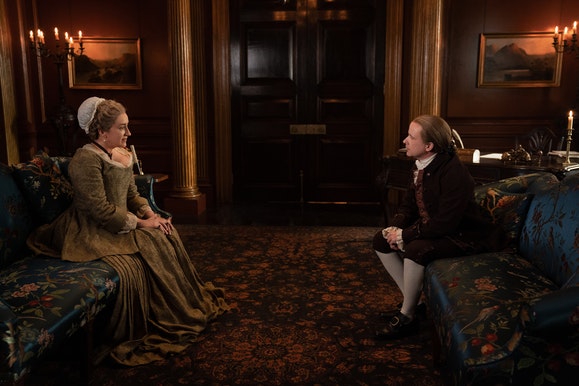 But Ulysses to the rescue – without a thought of what it would mean for him personally, he defended his mistress. And how touching was it when he was afraid he was too late, that she was dead?  Lovely small scene with Colin McFarlane. Yes, he has a great deal to worry about now, as was implied in the trailer for the next episode – for a slave to lay hands, much less kill, a white man meant death. Even if he was defending his owner. 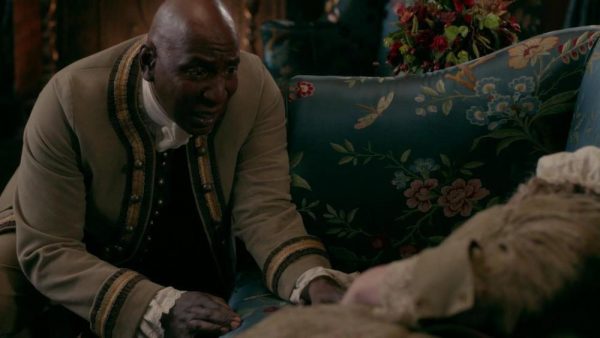 My biggest problem with this episode was the whole “Bonnet the gentleman” theme. It’s not in his character to care that much about being a gentleman. He’s mercenary, cruel, self-absorbed – sure, all that came from his upbringing as an orphan, tossed into the foundation of a building and left to die as a sacrifice (remember this legend coming up in an early episode during S1?). Does he think that Brianna will be accepted by the society he aspires to, after abandoning her husband and going to live with such an unsavory person? How can he possibly think that she accepts this situation and suddenly, overnight, is willing to take her – their – young son and do this? 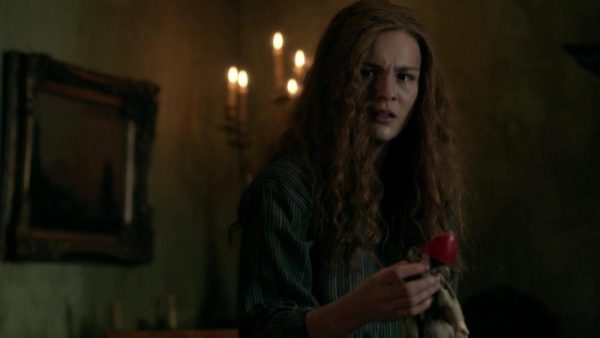 This felt too much like “ooh, this would be fun, let’s drop this in.” Yes, this is book related – in book 6, A Breath of Snow and Ashes, Bonnet does kidnap Brianna with the intent to sell her off to the highest bidder. It’s a much longer and more involved plot that would have been admittedly difficult to bring to screen, and a certain amount of latitude has to be accepted when you’re adapting a book for another medium. Several aspects – Eppie the whore, the man wanting to purchase Brianna – are picked up from the book (and I only mention that to show the halfway effort the writers put into it – if none of that had been there, sure no problem). But the way the writers tossed this odd plot twist into the mix was confusing and well out of character.

I must add, though, that the performances here were terrific, especially Ed Speleers. Bonnet is a juicy character, and Ed threw himself into this. When Bree corrects him on his impolite manner of eating, you saw that flash of deadly irritation, quickly stamped out. His quick turns from hopeful lover, eager pupil, willing father to vengeful and mercenary pirate were amazing. Sophie Skelton gave us a quick-witted Bree – you can see her quick thinking, her understanding of the danger of the situation, and her deliberate choice to play along to live and get back to her family. “I wouldn’t want you to think any less of me,” Bonnet tells her. “Oh, I couldn’t think any less of you, ” she responds, in a tone that made me laugh. 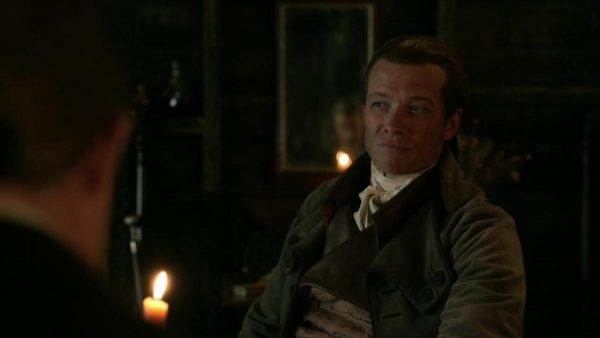 I’m very sorry the writers decided to end the Bonnet threat this soon. This was a recurring dramatic point that easily could have gone into season 6, just as it wasn’t put to rest until the end of the next book. I’m concerned in general about the condensing of the next book’s plots. There are quite a few storylines that don’t seem to have been introduced – and many of them have long-lasting consequences to our characters. I really hope that the show’s writers don’t stray too far from the original, like what happened with the True Blood series – many fans of the books ended up abandoning the TV series when it became unrecognizable. The Murtagh resurrection was a minor branching, eliminating a couple of original plot items, but ultimately working fairly well. Some of the things that happen in upcoming books should be part of the TV series, and need to have groundwork laid now if they’re going to happen.

The final scene – Bonnet sentenced to drown, terrified at the sea finally coming for him, was very well done. Brianna is a good person, and no amount of hurt done to her can change that. She went to the jail in Wilmington originally for her own peace of mind, to forgive not for Bonnet’s sake but for her own, but she had no reason other than a tiny bit of consolation to tell him that he had a child. And she kept him from his ultimate nightmare, and ended her own – but as Roger asks her in the end, “Was it mercy – or was it to make sure he’s dead?” 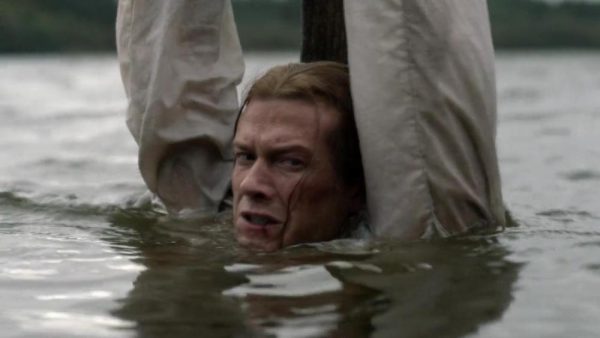 Next week’s episode was written by Diana – I have no doubt we’ll be back on the track of this generally excellent season!

TONIGHT, TUESDAY – The Outlander Gab on the Air! 9 pm eastern/8 central. Click here to listen and get the call-in number! We’ll talk about the two upcoming Wizard World virtual events, one this Thursday and the other next Tuesday. Our special guest will be Jerry Milani from Wizard World, who will tell us how this will all work! Callers to tonight’s broadcast will have a chance to win a great prize – having their question asked at the Outlander panel of their choice! 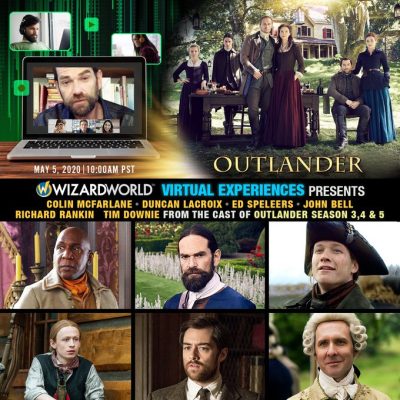 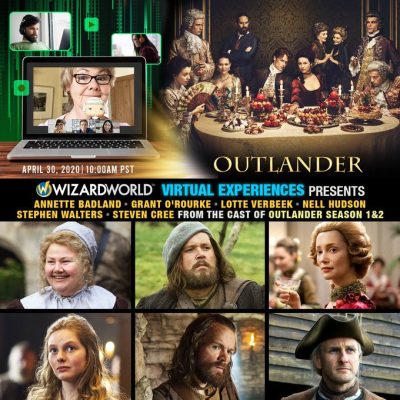 We’re on Facebook! Join us at Outlandishly Three If By Space
Follow me on Twitter: @ErinConrad2 and @Threeifbyspace
Subscribe for instant notice of new posts
Thanks to outlander-online.com for the use of their screencaps!