Q You said in one of this episode’s interviews that you weren’t sure how you were going to play it. Do you feel like the experience changed or added anything to your approach as an actor? Was it your hardest acting challenge to date?
A It’s definitely up there as one the hardest challenges. Telling the right story is the challenge – which had many potential pitfalls because I felt through the process of Episode 8 that there was so many ways to get it wrong. Really had to be specific.

Well I suppose that was the point. There was so many things he could say or would want to say but was physically unable. So there lies the frustration and the despair. #AskRichardRankin https://t.co/19OKWJBg7I

Q If you had to spend quarantine with one of the characters you’ve played in any production, who would you choose and why?
A Granty from #BlackWatch. Would be a pure buzz, like.

Sony TV, aye? You bored? 😂 Lots of great moments for Roger and hard to pick a favourite. I think the start of 18th Century Journey was the most exciting for me. #AskRichardRankin https://t.co/z1ZoPk6FDT

Q There’s an almost immediate emotional connection b/w Roger & Ian when they meet again in 508. They identify deeply with each other’s pain/grief. How did you and @JohnBell prep for this difficult reconciliation of your characters?
A I think a lot of the work was in identifying it but then the characters themselves are going through that same process so figuring it out with @JohnBell lent itself to the parallel of Roger and Ian working it out. #AskRichardRankin #Wejustwingedit.

Bless you and thank you!! 😚 Yes, Yes I do so my question to you is where can I get me some??! #AskRichardRankin https://t.co/jkXEd8Jx6I 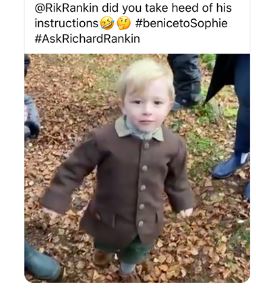 I can’t say that I have taken his advice fully, as yet but I’m working on it.

Q I was fascinated by how Roger’s physical appearance helped to convey his trauma. The glassy eyes, redness, tired baggy look. He looked emotionally wrecked and it took a physical toll. How do you do that? Stay up all night? It’s not all makeup.
A No, you’re right. There is indeed a process. A method. It’s called #Destiny2

Q In the end, Roger decides to get up and fight. Do you think a part of him will always resent that time and place for what it did to him, though?
A That’s a good question. I’m writing it down for my S6 prep. Not really. I think it’s coming to terms with the time, his situation, himself even. It’s a change that he has to go through and I’d like to think that he won’t hold on to it in that way.

Q What was it that Ian said that you think broke Roger’s inhibitions open?
A I’m not so sure it’s in what he said. I think when they each revealed to the other what was really going, they saw themselves in the other and didn’t much like it. I think that was a big turning point for them both.

Q was it hard to change your voice as you tried to speak? Fantastic episode so emotional for you and @JohnBell too
A It was a pain in the arse. Consistency was the tricky part in the vocal work. I had a lot of advice and on set coaching through it though, so that helped a lot.

Q If you could give your teenage self some advice – what would it be?
A Take the blue pill.

Q If acting had not worked out whAt other profession would you have chosen and why?
A I’d probably be working with computers or in the gaming industry. Because I love computers and games.

Q I have to say, I absolutely LOVE your duet with Sophie during the end credits! You both are great @ harmonizing together! What a treat for us fans!! I’m going to seriously miss U singing now, unless we have flashbacks? But u have a challenge to do still?

A  I do have a challenge to do still. I haven’t forgotten about that!

Q I think you mentioned in a recent interview that you were your least fun self during filming of 508 – that Sophie/Cait/Lauren must’ve been frustrated by that. Just too difficult to move in-and-out of that particular headspace?
A Not frustrated. Just bored. It’s not that uncommon I think.

Q In 507, did you know you would be working with Graham McTavish-that he was coming back since I heard it was kept on the downlow & not a lot knew he was coming back? What was your reaction when you heard he was?
A I think I heard about this quite late!! I remember being quite surprised and my reaction was mainly ‘Who is @grahammctavish ?!’ Turned out he was a real lovely fella who…guess what?! Had already been on the show, seasons earlier! Did you know?

Q Now that everyone knows Roger is alive, will we get more of Dickie’s daily diary?
A Yes, I am contemplating how to bore you all to tears for the rest of lockdown. It’s really going to be…something.

Q Today is my birthday. How do you think Roger would celebrate his birthday?
A With a tiny little Boston Cream Pie and an episode of Batman.

Q Even though the book was written ages ago and this season was recorded last year, this ep was very much “in time”…not only because of Easter as a new beginning but also because of the world right now. Did you feel that too?
A I always felt it was relevant and the themes/issues explored in the episode and in much of the show, for that matter, are timeless in nature.

Q Is there a book that changed your life?
A The Book of Mormon.

Q If you could pick a cast mate to be in isolation with, who would it be and why?
A

Q I thought you did incredible work in this episode .. Can talk about the scene where Bree gave tough love speech to Roger? What went through his head? I have a difficult time believing he would seriously contemplate suicide, especially after that
A He was in a very tormented and mixed up place and his brain and heart were swimming with thoughts and emotions. He had no focus. I don’t think he was really listening to her.

Q Your scenes with John Bell seriously made my heart burst! Love having him back! How was it like now getting to work with him again? Especially with you both going through so much in this episode?
A Love working with @JohnBell . He’s a lot of fun and a cracking actor.

Q are you playing that Taylor guitar during quarantine and what are you playing!
A Absolutely!! Mostly doing daily exercises in this great wee book I found. Gives you a Mon-Fri plan of 10 minute exercises which change each week.

for that last episode!! Fantastic acting!! Do you think you could ever not talk for as long as Roger did?
A How would I annoy everyone?!! Thank you very much for your kind words!

Q Do you enjoy working with Sam and Cait?
A I really do!

Q Are you missing doing your photography or have you been able to get outside a bit to do some?
A Just been taking pictures of myself. Lots of pictures of my feet – so that’s new.

Q Was the red in your eyes done by CGI or did you use contacts?
A Mostly they were contacts. I’m not sure if there was much added/emphasised in post production.

Q Favorite quarantine activity?
A Chatting to you guys, obvs…

Feels Good. Been striving to be trendy for a while now. It’s time. #AskRichardRankin https://t.co/5jsAxbqE9l

Q during quarantine people are trying to do something new like learn a different language, cook a signature dish, learn an instrument, etc. Have you tried anything new?
A I’ve been doing a lot of cooking. A lot of culinary experimentation. Quite successfully I’d say. With the exception of baked goods!

Q If you were to pick any film to be in, what film would it be and who would you play?
A Iron Man. Iron Man. That’s…just how I feel right now. But it would be me playing Robert Downey Jr, playing Iron Man though.

Q Are you reading anything at the moment?
A Tweets. I’m reading lots and lots of wonderful tweets!

I was probably dying for a drink, on my way to the bar and you wanted a selfie. I was raging. #AskRichardRankin https://t.co/CeUaHqbApX

Q Bree and Claire are from Boston, although most of the filming takes place in Scotland, have you ever wanted to film in Boston, Ma, or have you been before?
A I’ve been before. Haven’t had as much time as I would like to explore Boston, though! Sure, would love to film there.

Q Was it fair that Roger had to go through trauma in order to become the man of that time? Could Roger Wakefield ever have lived in the 18th century happily? Was he wearing rose tinted history glasses when he went through the stones?
A I’m sure he could live there happily. It was his path there and his circumstances that caused him the most trouble. Definitely rose tinted glasses. Maybe some whiskey. He could’ve met a nice lass at Oxford. Or Fiona, even?

😆That’s what I THOUGHT!!! The resemblance is uncanny.
😁👍#AskRichardRankin pic.twitter.com/739FHAGch6

Q how do they film the hanging scene so you don’t actually get hung?
A It’s all very carefully choreographed and there are mechanisms to ensure our safety and, actually, the sequence itself was shot with some of our amazing stunt team! So kudos to them.

He’s currently staying with my friend @MarkPrendergas5 in LA. The lucky bugger. He got stranded amidst the COVID19 travel mayhem. I’ll be back for him though. #AskRichardRankin https://t.co/mX9bqqeZOp