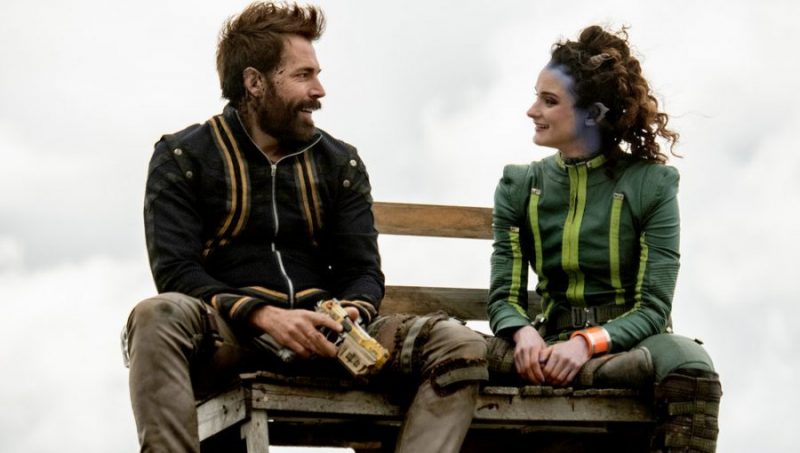 The rescue plan of Elida’s mother hits full throttle as the target planet is Wix. It’s here that mom is being held (Or at least that’s the story), according to the loyalists looking to restore the monarchy. But a clandestine discussion overheard by Isaac may mean something else is afoot. Let the intrigue commence.

Episode 103 of Vagrant Queen, “Nobody’s Queen,” even more clearly demonstrates that Elida, while anxious to rescue her mom, is far, far away from having any desire to return to Arriopa and restore the monarchy. In fact, the title of this episode echoes the words she herself speaks to the loyalist army that is forming. It feels as thought there’s another big shoe to drop in all this and we’re just kind of rushing toward the shoe rack to see which shoe it is.

So be forewarned, from here on out there are SPOILERS for this episode. So, if you don’t want to be SPOILED, do not proceed. If you’re okay with it, then onward brave and intrepid souls. Let’s talk Episode 103 of Vagrant Queen in all its snarky badassery and fun. 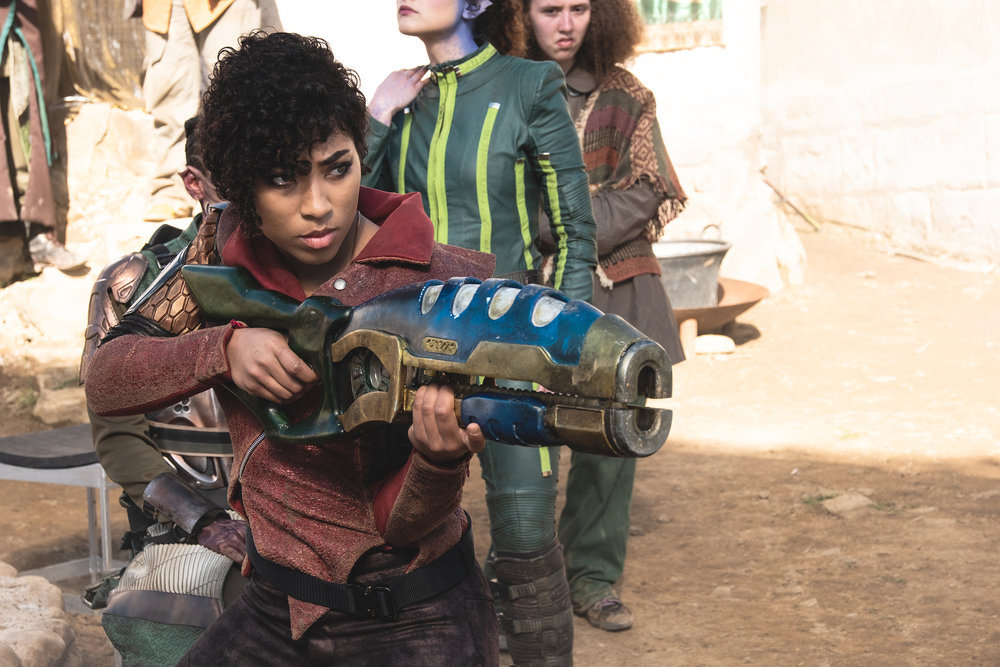 A refueling stop on planet Qualla sets the scene for a blaster battle in a fuel station convenience store. We get some Amae free-flow talk with an attendant, then in the midst of getting snacks and a slurpee-like beverage (Elida’s joy at discovering the concoction is delightful), shots start to be fired. Chips and other goodies go flying as our pair of loyalist regulars, along with a few others, end up stunning Isaac, Amae and Elida into submission.

And with that, the game is afoot. The loyalists are good fun as they seem to have a decent nature about them and genuinely care about their pseudo-queen, while trying to subdue her with a stun gun. There’s a kindness to their pursuit and capture, as well as a desire to make things right with the convenience store.

Throughout the episode, we get little flashbacks to 15 years before when Elida was officially crowned queen, the problems she had to deal with, a queen mother that had a definite point of view about how to rule her subjects, Elida’s bloodline and right to rule, and the attack on the palace that started this whole ball a’rolling. While I tend to agree with the queen mother’s comment about a “complicated web you’ll learn to weave,” I found it kind of harsh that she felt it not a doable queenly thing to ease their starvation. Come on mom, feed the peasants. 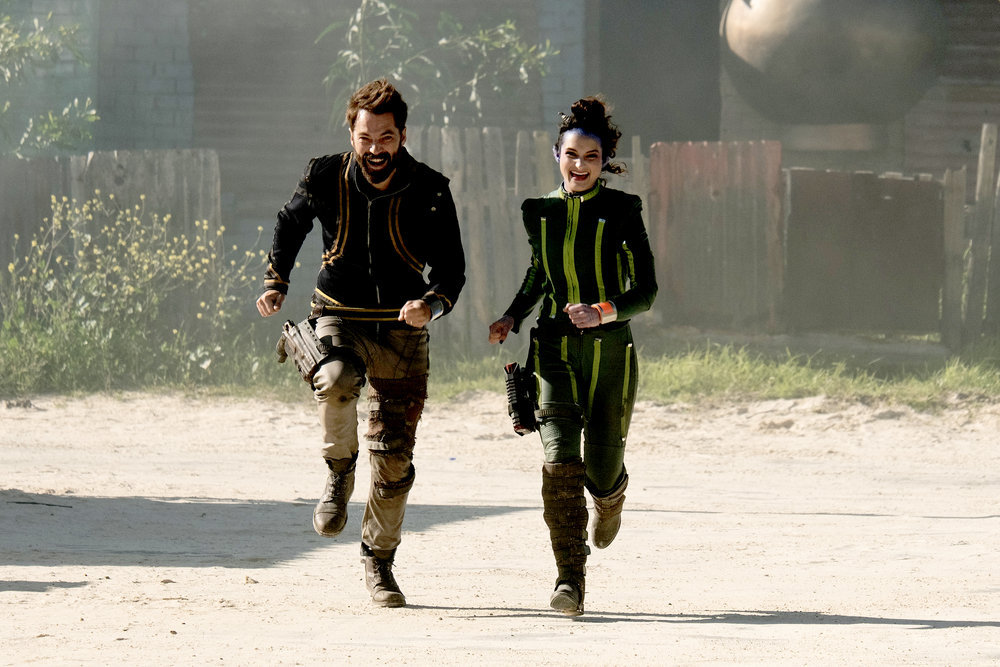 Planet Kestallan is where the loyalist army is forming. It’s here that our trio of misfits finds themselves and the planning for Elida’s mother’s escape is in full flower. But is that what this is all about? There are clues, right? Isaac goes in search of whiskey, Amae goes in search of booty, and Elida, once she awakens, goes in search of escape. Only Isaac seems to really, truly find what he’s immediately looking for on Kestallan – booze.

There’s also some fun when Isaac embellishes his personal achievements a bit too much which gets him into a little karate demonstration that doesn’t end well. However, his kung fu hand motions were a nice little sideshow. For Isaac, everyone is not kung fu fighting.

What Elida does find in the royalist camp is an old friend, Hath (Played by Colin Moss). While they catch up and listen to the plans for the rescue (The general seems a bit tense), Isaac and Amae go to a nearby abandoned mining town to search for parts and supplies. One thing I find endearing about Vagrant Queen is that some of the creatures we encounter have a bit of a low budget feel to them.

The long-armed ape men from Griebos (People on all fours with arm extensions) had a simple organic creation to them, and the “rodents” of Kestallan had a homemade feel as well (people in rags and a mask moving on all fours). While some may see this as somewhat low budget, I find it endearing. Sometimes, you just have to make do with the materials at hand.

Later, we run into other creatures that appear to be wearing “safety green jackets,” complete with reflector tape. Honestly, it gave me a chuckle. Not in a bad ways, but more of an “I recognize what those are” kind of way. There’s a nice bit of charm to it, for my money. I’ll be honest with you, stuff like that doesn’t hang me up. Give me an interesting story, characters I can get behind, and off we go. 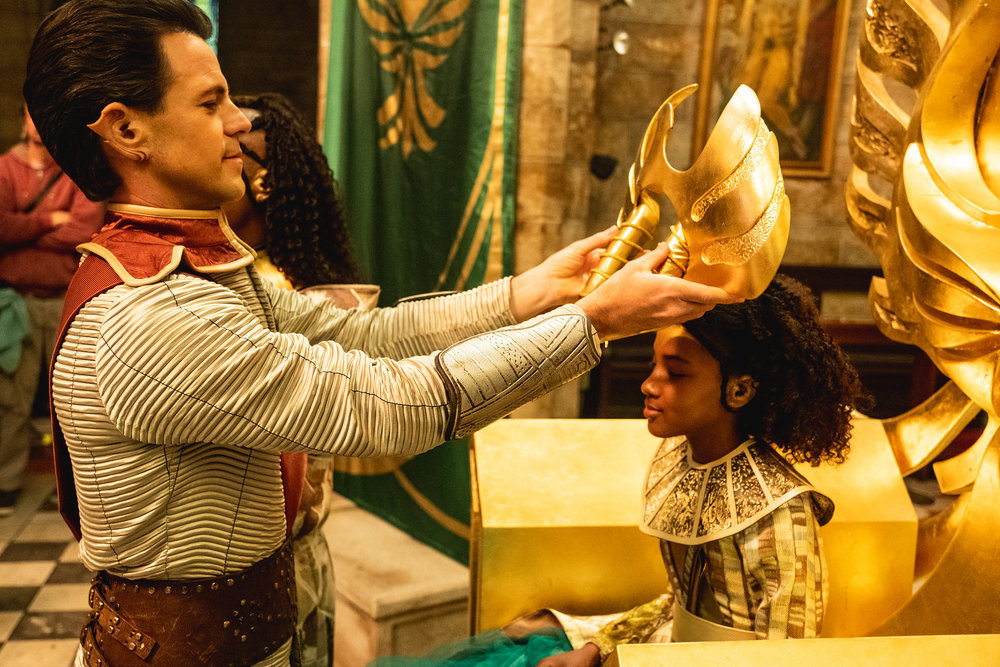 There’s an incredibly slimy/sticky creature we see later trying to betray Elida that is so freaking gross. The slime is just sticking to him and then, when pressed, some green ooze squirts from the side of his head through puss channels. Ask Lazaro all about how that feels? So, let’s cut Vagrant Queen a little slack and just go with it. More fun that way.

Amae and Isaac run into the rodents in the mining town and we get a fun little “Night of the Living Dead” kind of moment as they hold up in a building with our “rodents” outside the windows. Amae and Isaac, even though threatened, do get some time to learn a little bit more about each other, and I have to chuckle about Isaac’s Canadian Football League references,

Winnie B, the small droid-like appliance that Amae liberated in last week’s episode, proves its resourcefulness and reliability when it rides (very slowly) to the rescue, delivering an ear-splitting frequency that drive the rodents away. I’m starting to find Isaac’s lack of mental nimbleness somewhat refreshing. He’s definitely a reactionary type guy, not one to ponder the moment and its possibilities. He also alternates nicely between moments of impromptu bravery and crying fear. He’s an interesting one, this Isaac. There’s more there than it may appear at times – and then there are times there isn’t. He’s a character you can root for. 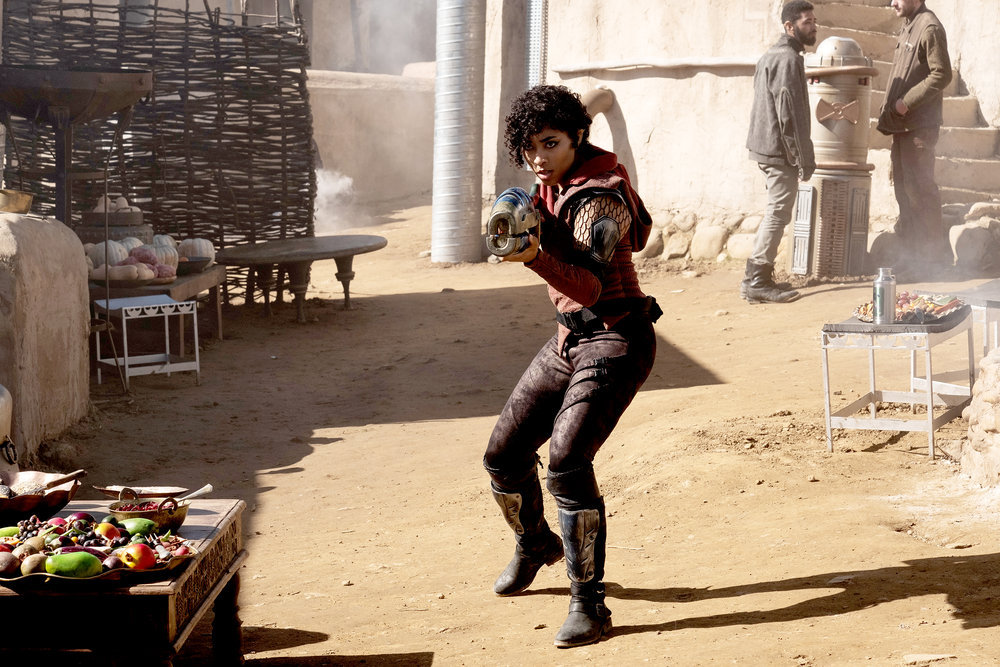 The flashbacks of Elida’s childhood are interesting because even back then, there was a certain rebellious streak and sense of being honorable that seemed a bit at odds with wearing the crown. You have to wonder if Elida finds the freedom of her scavenger life more fulfilling than she found being a royal. It would appear the many gray areas of a simple scavenger life, and the dangers it presents, fits a little better with her sensibilities.

So, Amae and Isaac are saved by Winnie B even as Elida and Hath visit an old friend of Elida’s – a smuggler who can get them through the planetary gates of Wix. Elida wants to sneak in and drawn less attention while the general is prepared to blast away. I like Elida’s plan better and with Hath, Isaac and a few hand-picked accomplices, the gang sets off for Wix and what they hope will be a reunion with mom.

Unfortunately, it feels like there’s far more to this story. Isaac overhears Hath, the general and some other royalist big-wigs talking about an “it” rather than “she.” It appears that the journey to Wix is about something called a Sterzaad. It apparently has the ability to control minds. Sounds like a weapon to me. Of course Isaac overhears the conversation and in wonderfully dense Isaac fashion, he blows it off with a shrug. Whiskey in hand, information kicked to the curb. That’s how Isaac rolls…and rolls…and rolls. 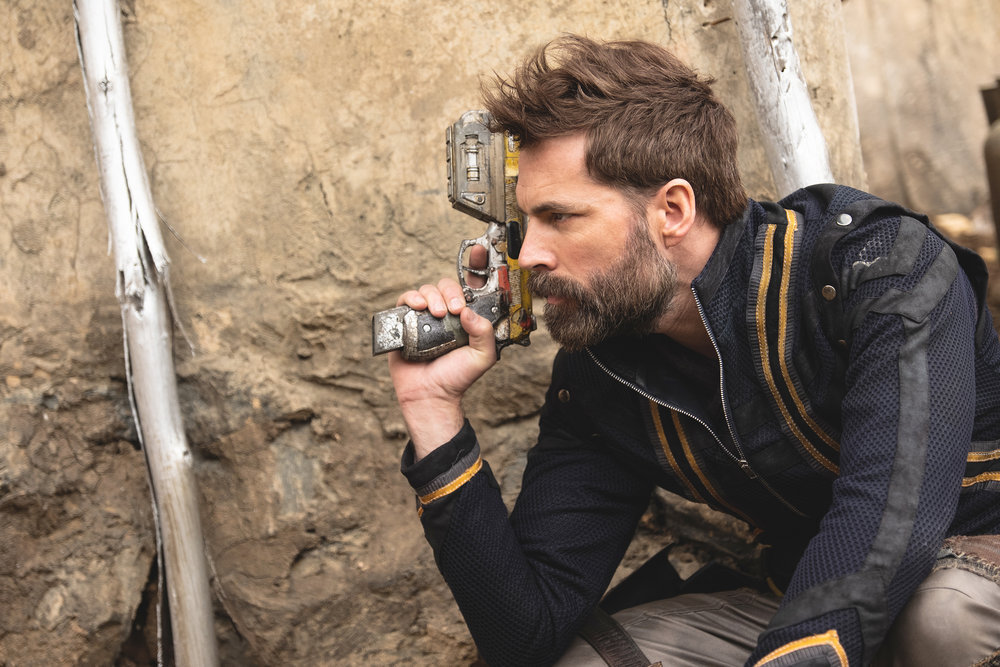 We don’t get a ton of Lazaro in this episode, but what we do is, as usual, subtle and menacing – mixed with a quirky cool. Love this character and we discover he’s one of the forces behind the rebellion that toppled the monarchy. “No longer will an incompetent child rule,” he shouts to the throng of rebels, torch in hand.

Again, he also gets slimed by a very sticky alien with information to sell. It’s gross, but it’s funny and Lazaro is not amused. That’s always a recipe for someone’s demise (Cue slow chair turn with ominous music backing it). He’s been ordered back by the admiralty, but in true semi-crazed bad guy fashion, he chooses to zig when the admiralty requests he zag.

I enjoy the backstory moments a ton. I like to know how people got to where they are at this given moment and Vagrant Queen has delivered on that nicely. It’s obvious that there’s more to this than simply a rescue effort – and the Sterzaad would appear to be at the heart of it. It is starting to feel a bit like Elida may be simply the means to an end – not the end herself. We shall see how it plays out as all roads lead to Wix. And let’s be honest, if Lazaro got some info from his sticky, slimy guest, it’s likely he’ll have a part to play in all this before it is over. How delightful, right?