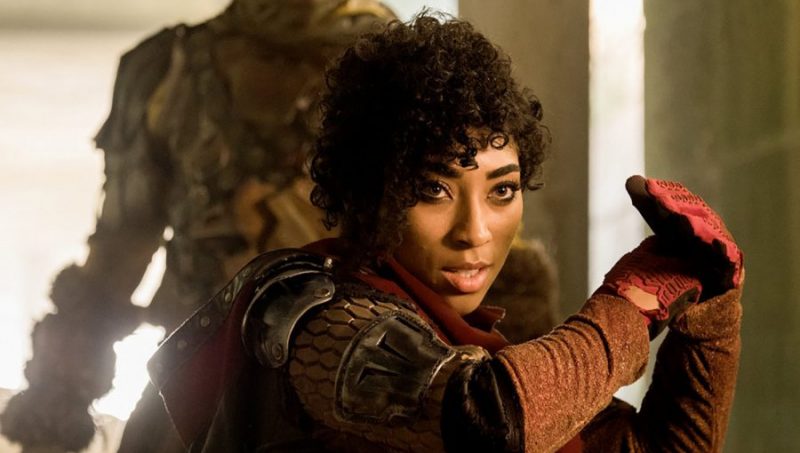 It’s hard not to like the sound of Adriyan Rae’s voice. There’s a gentle friendliness to it that invites you in and makes you instantly comfortable. It’s also a voice that offers strength, passion, and a joy for life and work that’s infectious.

If you’ve caught Rae in her title role as Elida in the new SYFY series Vagrant Queen, so many of those delightful qualities are part of the emerging fabric of Elida. It’s easy to see why having a conversation with Rae, and catching Elida in action, are both so enjoyable. You just want it to keep going.

“I view Elida as a strong woman who is on the journey of finding herself in her own voice,” explained Rae recently. “I think that’s the major character arc for her. In the midst of finding her mother, she is discovering who she is and standing up for who she truly is and finding her voice in the midst of that.” 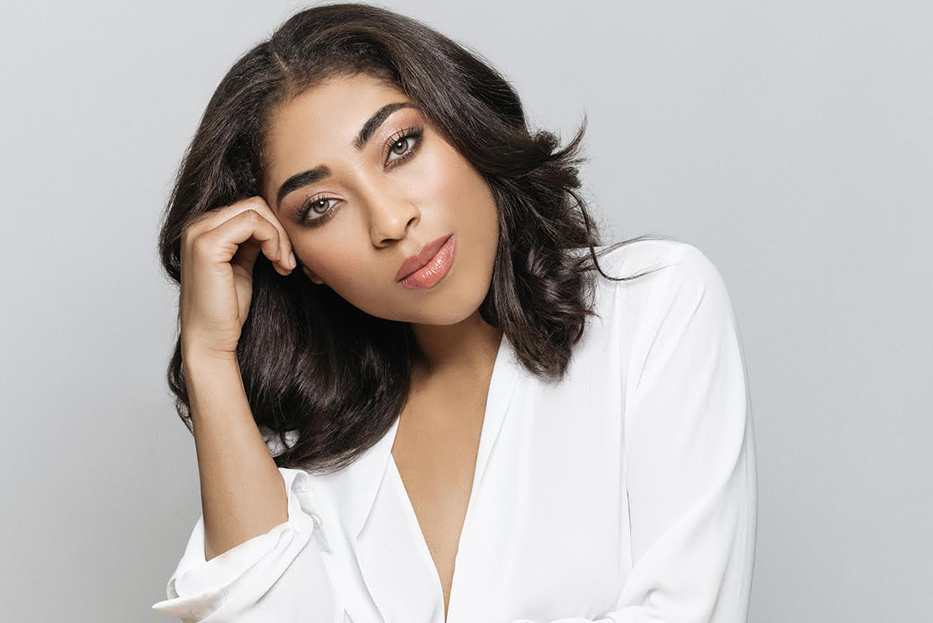 Adriyan Rae wasn’t expecting an acting career, but has fallen in love with the work and the feel of it all. Photo by Diana Ragland.

The premise of Vagrant Queen (Thursdays on SYFY, 11/10 CT) is that Elida’s royal family was overthrown in a revolution 15 years prior. Her mother shoved her into an emergency escape pod as the mob closed in and since that day, Elida has been on the run, earning what she could as a scavenger. She’s used her considerable wits and impressive fighting skills to stay under the radar of the new Republic leadership, most notably her nemesis Lazaro.

Her loyalist subjects want her back on the throne, her friends Amae and Isaac simply want to help, and the issues of trust and duty are things she’s working through as the search for long-thought-dead mother revs up. Even through the first few episodes, Rae noted that Elida has been undergoing some interesting and important changes.

“Originally, she was very much just about surviving – it was the key goal,” explained Rae. “It was every man for himself. Now, as we get into episode 4 (and beyond), she is more friend-oriented. She is thinking less about self and is concerned more about other people than she was before.” It’s a theme that will resonate throughout the 10-episode series.

Getting to this point, however, has been an interesting journey for Rae. The trip from medical student to successful actor has been a quick one, something she honestly didn’t foresee even a few years ago. Growing up in southern Delaware, she didn’t participate in anything theater related. The same for her college years, where she pursued a double major in Physician Assistant Studies and Medical Laboratory Science. 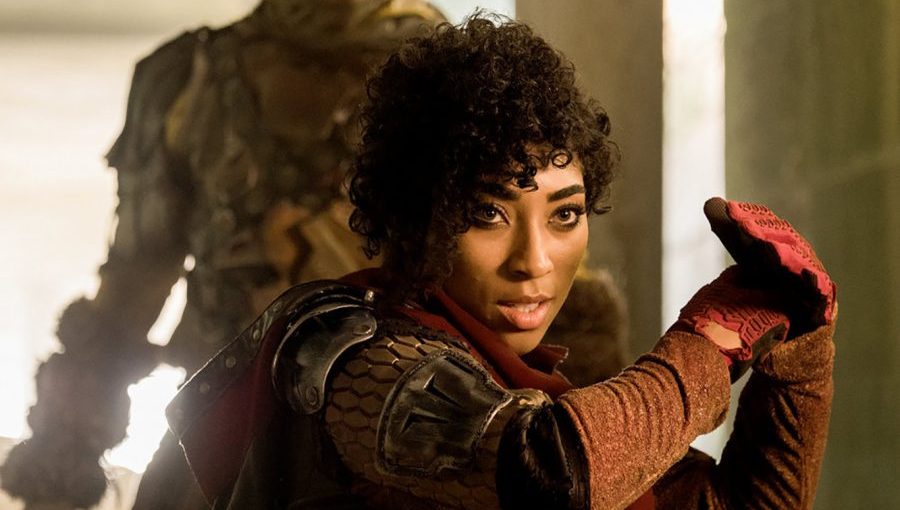 “From there, one thing led to another and I found myself on the set of a TV pilot,” Rae said. “I was there for 15 hours and I loved it. I didn’t know anything about acting or theater or anything like that. I have no idea what brought me into the acting realm, I just knew that it was where my career and passion met. It wasn’t work, it was something I loved doing.”

And she has found taking a bite out of the acting apple pie to not only be satisfying, but also helpful in the day-to-day life. “Acting is like a release,” she said. “Based on the character, it can be a way to heal old wounds, see different aspects of yourself, it’s really therapeutic for me. What you’re creating is the ultimate act of love and I just love doing it so much. When I’m in the scene, it’s just so beautiful. Your thoughts actually become the character’s (thoughts).”

Even though she’s only been on the acting scene a short while, she’s has a pretty varied list of credits behind her, including work on “Atlanta,” “Brockmire,” “American Soul,” “Light as a Feather,” and her current lead role as Elida on Vagrant Queen. Rae noted that she and Elida share very different experiences of their youth – Elida was in a rigid royal family, sheltered, intensely trained and eventually thrust into the world, while Rae notes she grew up in a big family that was open and filled with love and fun. However, as the series moves on, she said that their life experiences start to converge.

“Her (Elida) arc is starting to shift more toward being family-oriented,” said Rae. “I feel that her arc is very similar to mine. Elida is a very loyal person and a great friend – we have that in common.” Rae added that she pulls things from her life to infuse into the character of Elida. One thing she noted was that “when I was younger, I used to walk kind of Tom-boyish and I gave that to Elida. That’s a physical similarity we now have.” 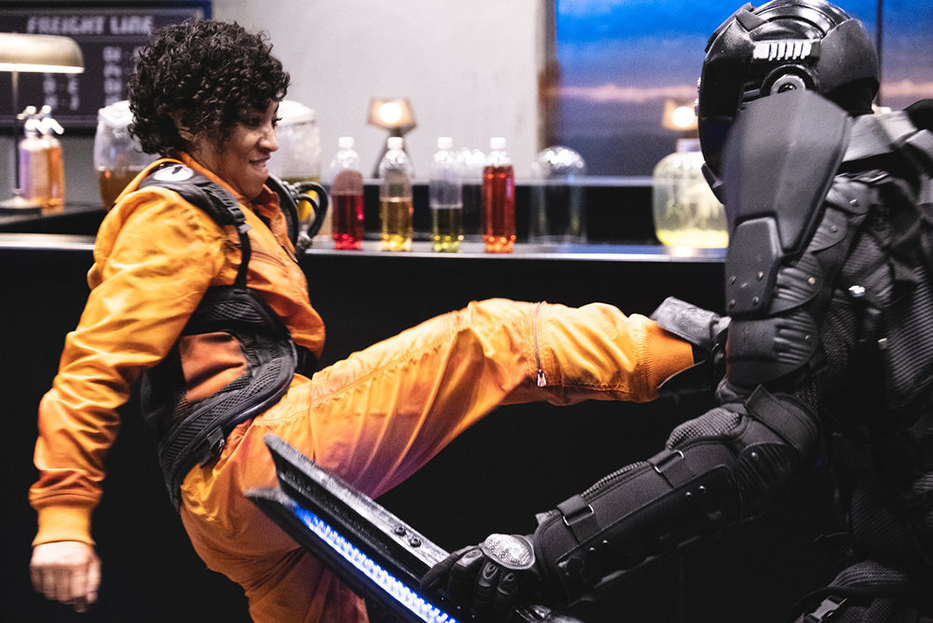 Being able to pull from her own experiences and bring them to Elida has been a rewarding experience during this first season of Vagrant Queen, according to Rae. She said that the people she works with on the show are very collaborative, “We let creativity flow. There’s respect for each other’s work. It has been nice.”

Rae admitted she was nervous as filming began, but as the series has passed its fourth episode, she noted that things had settled into a nice groove. There have been some pretty memorable moments thus far, including the karaoke battle in episode 2, and the firefight in episode 4 in the concourse of the gate into Republic space. In that scene, Rae got to kick, shoot and fly around taking out the Republic guards. She said it was a lot of fun and she got to do just about all of it.

“My favorite part was the tuck-and-roll,” said Rae. “They were going to let the stunt girl do it, but I wanted to try it. I worked on it and I was able to do it and they used that take. It was an amazing sense of accomplishment. It was difficult, but everyone was so patient.”

To land the role of Elida, there was the audition process to get through. Rae said it started with a self-tape for the initial audition. To get ready, she’s read the comic, seen the pilot script, and admitted that she felt an instant connection with Elida. “Her words were so easy to relate to for me. I went all-out for my audition tape and it was a really great feeling because we audition a lot, a lot, so I was at the point where I was going to do what I think is cool. I got notes back really fast, which is often a good sign, then did another audition tape for a call-back. Then a few days later they called and asked to talk to Elida.” 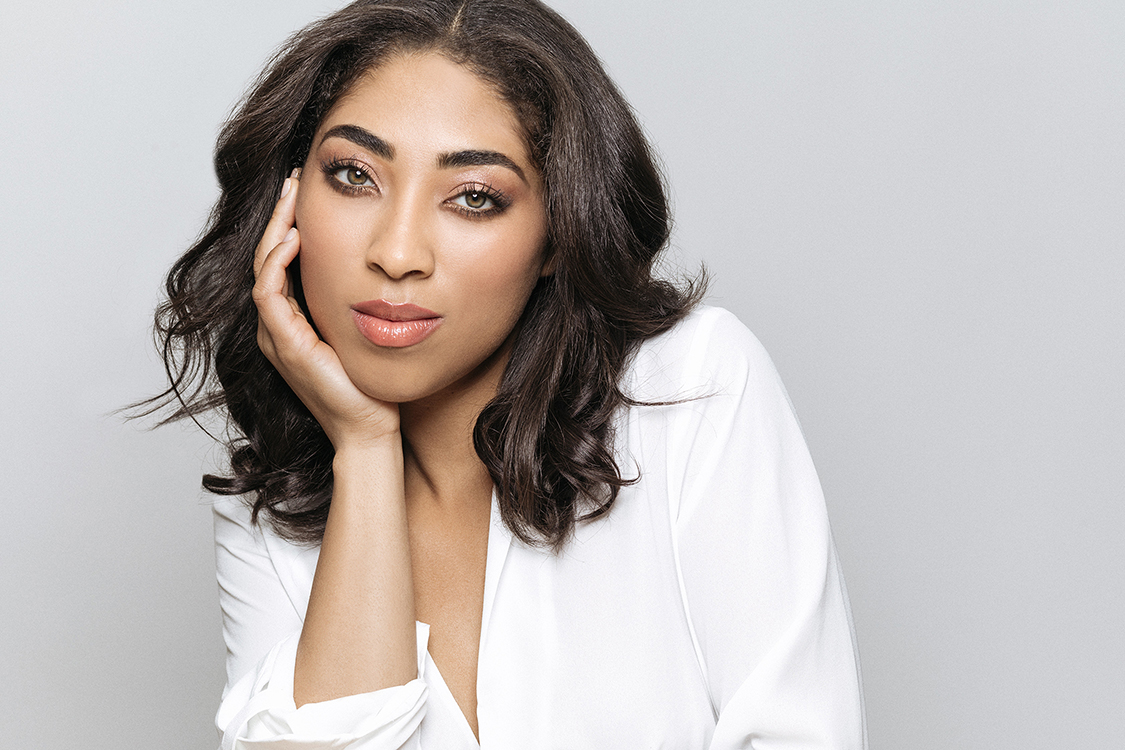 Adriyan Rae has enjoyed helping Elida find her voice as Vagrant Queen has progressed through this season. Photo by Diana Ragland.

And with that, she’s now in the midst of her first season as the lead character in a snarky, fun and sometimes gritty sci-fi show called Vagrant Queen. She thinks there’s plenty in the show that people can relate to and take away from.

Looking down the road, Rae admitted she wouldn’t mind finding herself in some fun situations. She said she’d love to be in Westword, as well as a part of the Marvel Universe as one of the characters people haven’t seen yet. And what’s the go-to movies and TV shows she enjoys? Rae loves “The Break-up” and “Sweet Home Alabama,” as well as “The Outsiders,” “Succession,” and “Killing Eve.”

For now, though, the first season of Vagrant Queen reaches its halfway point. And while Rae has a couple other projects that will be rolling out in the future, the hope is Vagrant Queen gets a second season and Elida’s voice continues to grow and evolve.