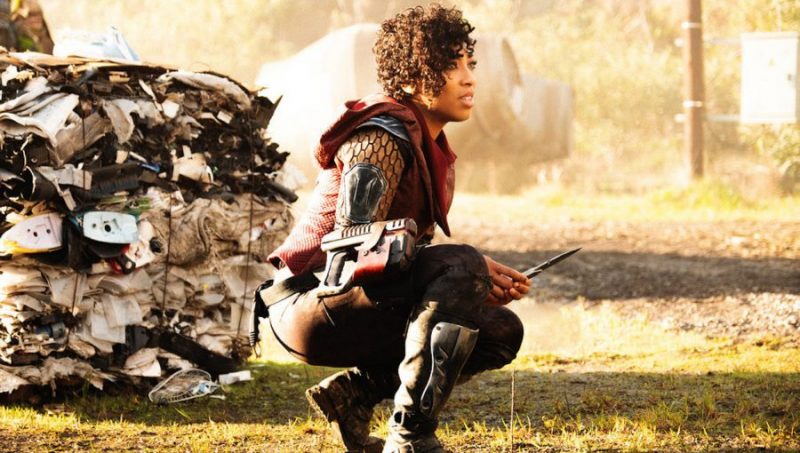 Two episodes into the Syfy original, Vagrant Queen, and it’s clear that while there’s enough “tongue in the proverbial cheek” going on in this space offering, there’s also some serious messages and interesting story development. This isn’t a kid’s show, as the many moments of levity, fun one-liners and interesting creatures have to be measured against a show that isn’t averse to showing you where the blood is coming from.

Yes, Vagrant Queen is an interesting little sci-fi space romp and two episodes (Yippee Kie Yay) in, the picture of Elida, Isaac, Amae and their individual and group struggles is beginning to clear – or perhaps clarify. There’s plenty of fun aboard the spaceship Winnipeg, but there’s also these wonderful little pockets of other things that not only make you realize there’s some serious stuff going on, but also offer interesting little surprises. I’m enjoying it.

Now, be wary. There are SPOILERS from here on. So, if you don’t want to be SPOILED, you have been warned. Otherwise, let’s talk Vagrant Queen. 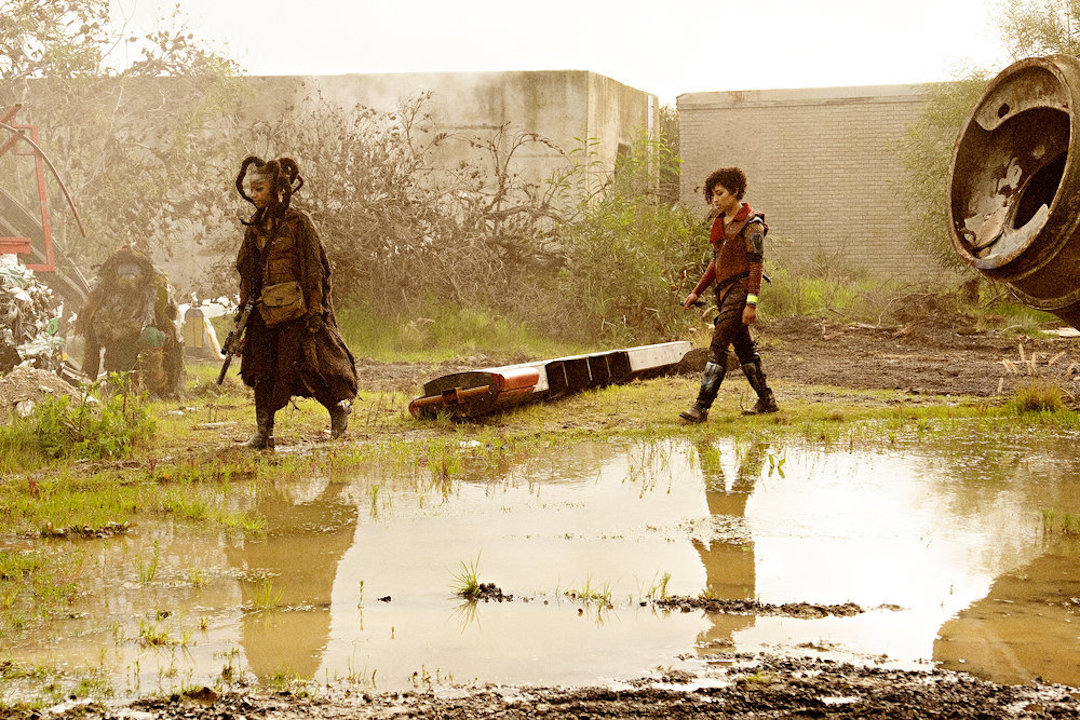 But remember this, oh writers and creators of Vagrant Queen, you had me at karaoke. Yes, there’s a lot more going on in Ep. 102, but after Elida, Isaac and Amae are forced down on the planet Griebos, it’s all prelude to a little arc that just brought a smile to my old face. In the search for fuel and repair, the Winnipeg sets down on Griebos and we find that there’s a sinister side to things. Not to mention the planet’s a junkyard and home to some interesting creatures (a little rabbit vomit, if you please).

Eventually, all three are captured and forced to fight gladiator style for their lives. You see, the antagonists on the planet are cannibals. So, the winner lives and others are cooked and eaten. Simple, right?

But that’s where it actually gets funs. The life or death battle isn’t with weapons, it’s a karaoke battle. Locked in their respective cages, our three heroes will go microphone to microphone with a giant bunny-like creature over the open flames of victory or death. Loved that little plot twist, but as if that weren’t enough of a fun little add-on, the song choice was riotous – “Nothing’s gonna stop us now” by Starship. 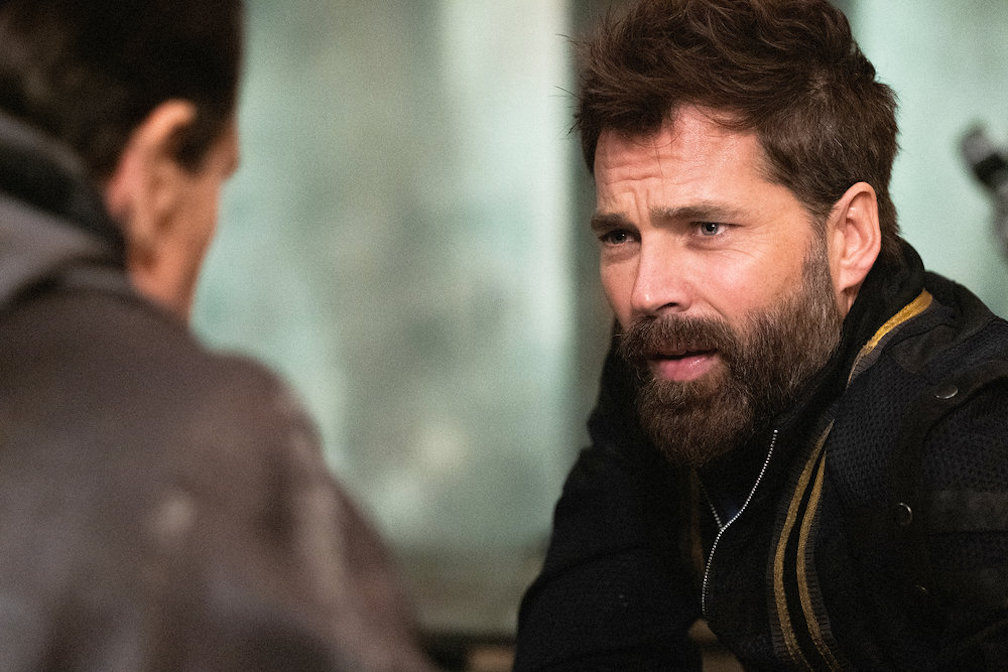 The ’80s music scene (When MTV was fun) comes flooding back in a cool sing-along moment. It is one of those wonderful little pockets of fun that I’m beginning to realize this show will trot out that adds to the joy that is Vagrant Queen. It’s kind of like rounding a corner thinking you know what’s around the bend and discovering something completely different. To the writers, directors, creator and actors of Vagrant Queen – well done. I thought this was such a fun twist of the plot.

There’s just so much to enjoy here as the emcee of the potential roasting seems to be doing his best Billy Porter as Pray Tell (Pose) impersonation. It’s just another humorous little touch that reaches us in a fun way as Amae, Elida and Isaac battle their giant bunny opponent over a classic 1980s song.

I have to wonder if Adriyan Rae, Alex McGregor and Tim Rozon had a big level of fun filming that scene. All of it just seemed to scream “let it go.” It strikes me as something you have to give yourself to totally to make it work. Whoever was in the bunny makeup – way to be the first to dive into that song. Nicely done – bunny. 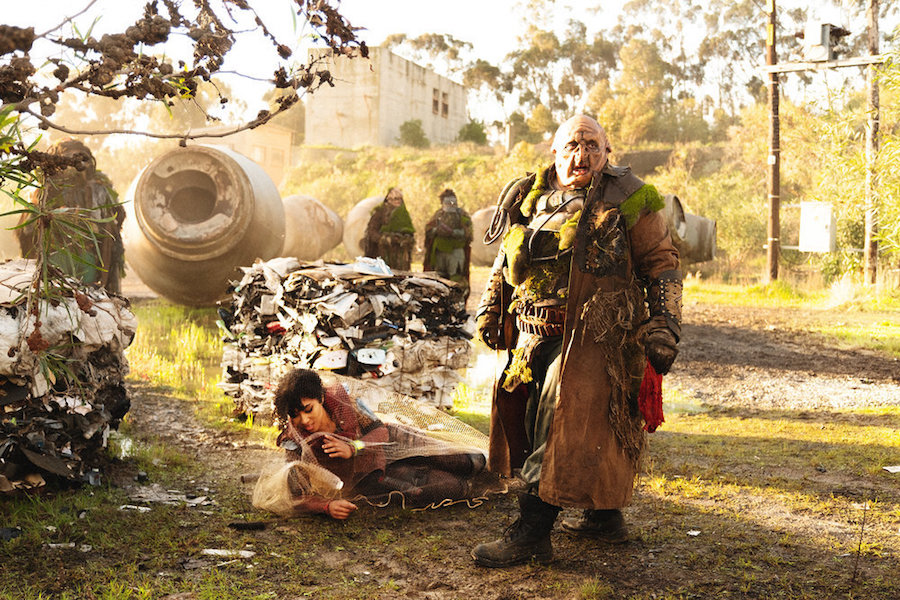 Now naturally, Elida uses the mic chord to swing on out of the cage when they appear to be barbecue-bound and the fight is on. Butts are kicked, blasters are fired, blood is splattered and one again we see the full force of badassery that Elida brings to the equation. In the end, our trio slaps around the bad guys and escape, the Big Bunny overcomes his jailer and frees the other captives – and strikes a superhero pose in the process (cheeky Bunny) – and Elida gets Amae a little parting gift.

One other thing. Vagrant Queen does a little stop-action at certain points, another thing I find to be a fun little twist. You know, 3-D look at the action at a particular moment. Again, it’s fun.

One emerging aspect of this show, even in the first two episodes, is that family is often where and with whom you make it. You can see that despite Elida’s desire to keep people at a distance, she is finding it hard not to care about this motley crew she is gathering around her. Amae says she’ll stay on to see the trip through, a new little droid-like device has come aboard (the gift from Elida to Amae), and the whole damn thing is pretty darn fun in the process. But it’s not without hard moments, either.

Amae is a fun character. She’s kind of that space free spirit, right? And, it would seem she has a large helping of the sexual free spirit in her as well. Her brother noting she probably has a “booty call” in just about every port. It’s also not hard to see that she’s starting to look at Elida with a little bit of desire in those eyes. She brings a delightful innocence and buoyant spirit to the party, but in this episode she did a little booty-kicking of her own. She’s a young lady with an ever-expanding skill set. I like her tool kit moving forward. 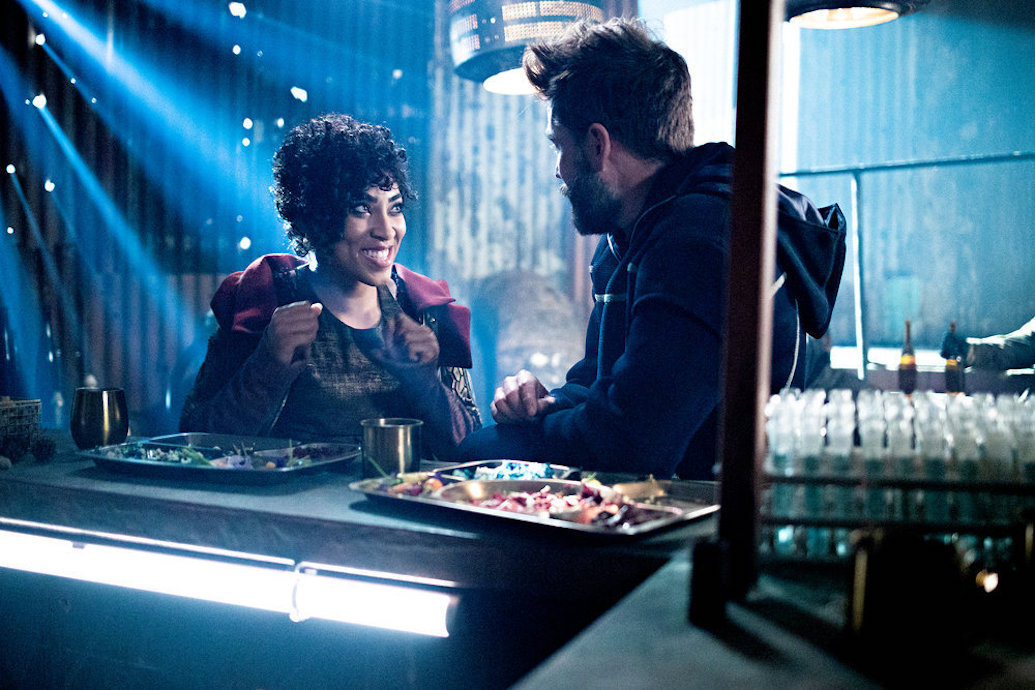 Isaac is kind of a lovable boob. He means well, but his mental dexterity is a little stunted. He kind of reminds me of Jayne from Firefly, though not nearly as badass in the battle department. He’s trying to get home to Earth where his wife and child are. Apparently, he was thrown millions of miles away and has been trying to get back for a couple of years. It’s also worth noting that he seems to have a penchant for not only getting in over his head, but for having a somewhat “whatever” attitude about it. He’s definitely a “by the seat of his pants” type of guy. Tom Rozon really has a nice flair with this character.

Unfortunately, for all the fun our gang is having singing karaoke, tearing up a bar/restaurant and coming to grips with their impending close quarters aboard the Winnipeg. Life isn’t all unicorns and rainbows for others that we came to know in episode 1.

Nim has survived the explosion at Xija Station and Lazaro, calm malevolence that he is, goes to work on him. There’s blood and there’s pain and this show doesn’t shirk from it. For all the fun and games, there’s real distress on Vagrant Queen and the scene with Nim is an example of that. In the end, with a blood-stained Lazaro standing over him with the face of calm evil, Nim grabs a knife and impales himself in the neck. 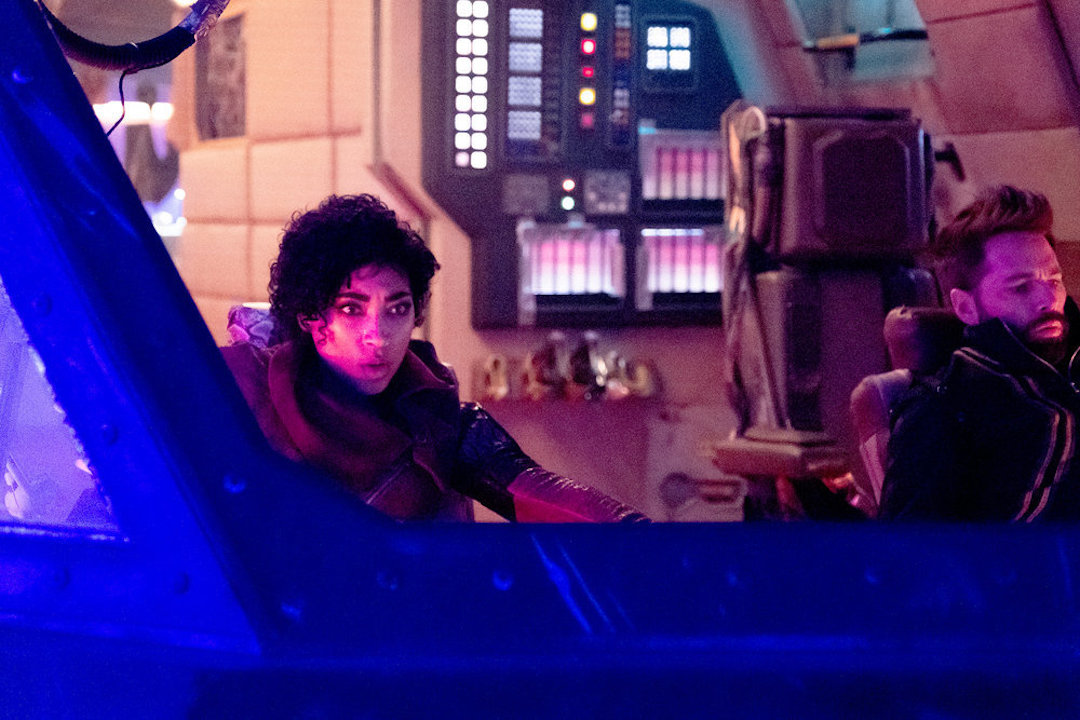 And while Lazaro makes some off-handed snarky comment about loyalty, it’s clear that Elida won’t be able to avoid facing her royal lineage for long. There are creatures out there whose fealty to her family are very real and they are ready to die for her. Amidst the fun and offbeat humor of this show, there’s a level of seriousness that needs to be respected and enjoyed.

It’s clear Lazaro feels that killing Elida is a personal thing. When ordered home by the admirals, he does what narcissistic committed nutty bad guys do – ignores the orders and strikes out on his own to finish the job. There’s got to be more backstory to Lazaro’s obsession with Elida and ending the royal bloodline. I’m hoping we get some more clarity to that situation. Or, he’s just a committed evil person with delusions of grandeur.

Speaking of backstory, we also discover what brought Isaac and Elida together as scavenger partners, and what ultimately drove a wedge (and a blaster shot to Elida’s leg) between them. It’s a great moment where both are right and wrong. Isaac and Elida’s motivations are much different and the discovery by Isaac that she is the queen sets them off into wildly different paths. It was interesting to me to see how both struggled to fully understand what the other felt in that moment. On the planet Varook, it all came out and Elida left Isaac on the ground while she stole the Winnipeg. Hey, let’s be honest here…she stole Isaac’s ship, baby. 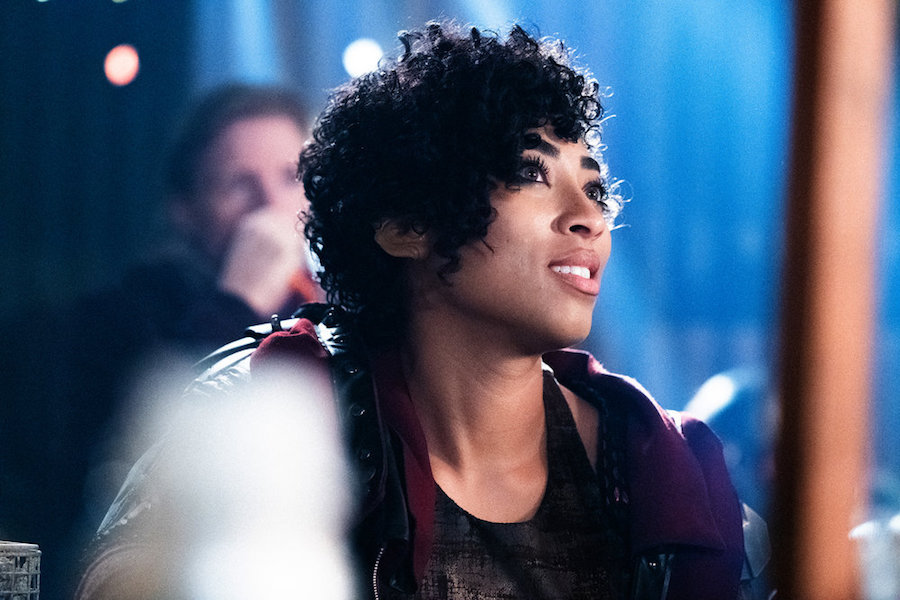 But through all the struggles, the band is getting back together – and adding a few more instruments. The search for Elida’s mom (if that’s the truth) has begun and the chase is on with Lazaro in hot pursuit. We’ve also got the royal loyalists still on Elida’s trail so they can “save” her and the monarchy. Those two are a fun duo, but it should be interesting to see how that all shakes out. Elida’s past and present are sure to collide at some point – and we’ll see who is being honest and who is not.

I always view new shows through the lens of “the rule of three.” I feel that a new show needs at least three episodes to kind of set the stage, introduce the main players and offer enough to hook me in. I’m happy to say that two episodes into Vagrant Queen, I’m feeling a fun and quirky sci-fi vibe with this show. Yes, it won’t be everyone’s cup of tea, but from my perspective, as a fan of Firefly, The Expanse, The Orville, Killjoys, and others, this show dials into a unique niche that no show I can think of fits into right now. So, let’s see where it takes us, shall we?