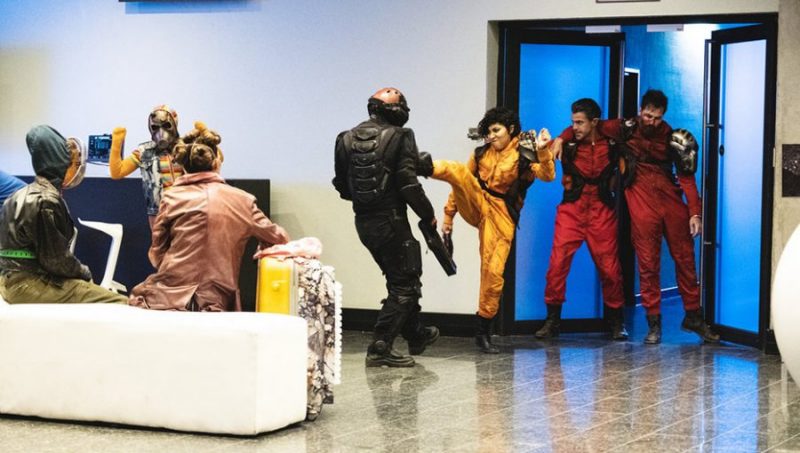 At long last, our heroes have landed (with a thud) on the planet that Elida’s mom is supposedly being held captive on. Ah, but getting there is, as they say, half the fun, right? Well, in episode 104 of Vagrant Queen, titled “In A Sticky Spot,” getting there was kind of a wild and woolly ride – and yes, sticky even. Heck, landing on the planet was no graceful, feel-good kind of thing.

But before we get into episode 104 of Vagrant Queen, it’s important to note that there are SPOILERS ahead. That’s right, there are SPOILERS coming at you like an asteroid storm, so forewarned is forearmed. And with that, let’s away.

The goal is to get to the planet where Elida has been told her mother lives in captivity. Whether that’s the case, we shall see. There was some whispered talked about this thing called the “Sterzaad,” which one suspects is also on the planet. So, whether the “mom is alive” story was just a ploy to get Elida to the planet, time will reveal all. Unfortunately, they got there after being buffeted by an asteroid storm and essentially crash-landing. But, on the planet they are, so we are getting close to seeing just what exactly is going on. 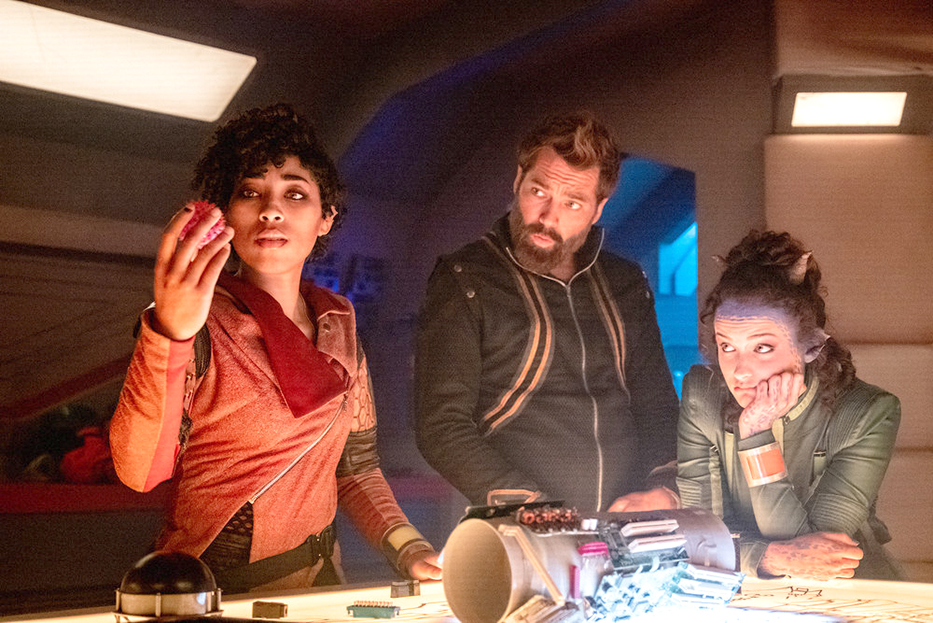 But getting to that point was kind of a thrill ride with some shooting, kicking and general chaos. The gang, including Elida’s fairly gross friend Clive, plan their breech of the gate that leads to Republic space and the planet they are after. There’s a basic outline of plan and a lot of “let’s go for it” mojo working. What would Rocket Raccoon say…they’ve got about 45 percent of plan? Yeah, that feels about right.

Clive, who goes back and forth through this port regularly smuggling stuff, will lead one team through the gate – let’s call them the Arriopan 3. Isaac, Amae, Elida and Hath will exit the ship early, make their way through the port and reboard the ship after it clears – customs (whatever). Simple, right? Things go south almost immediately as Isaac stumbles, falls and is eventually caught.

You know, one of the things I enjoy about this show is the growth that Elida is undergoing. When we first met her, she had a decent heart underneath that leather and steely self-reliance, but pushing people away and lack of trust were really kind of her magic power. Four episodes into this thing, we get the clearest picture yet that that has changed. It’s interesting, because Hath continues to appeal to the royal in her, the dutiful daughter that she was once, but that’s simply not her – at least not the her he’s trying to reach. But a friend in trouble? Yeah, that’s just her game. 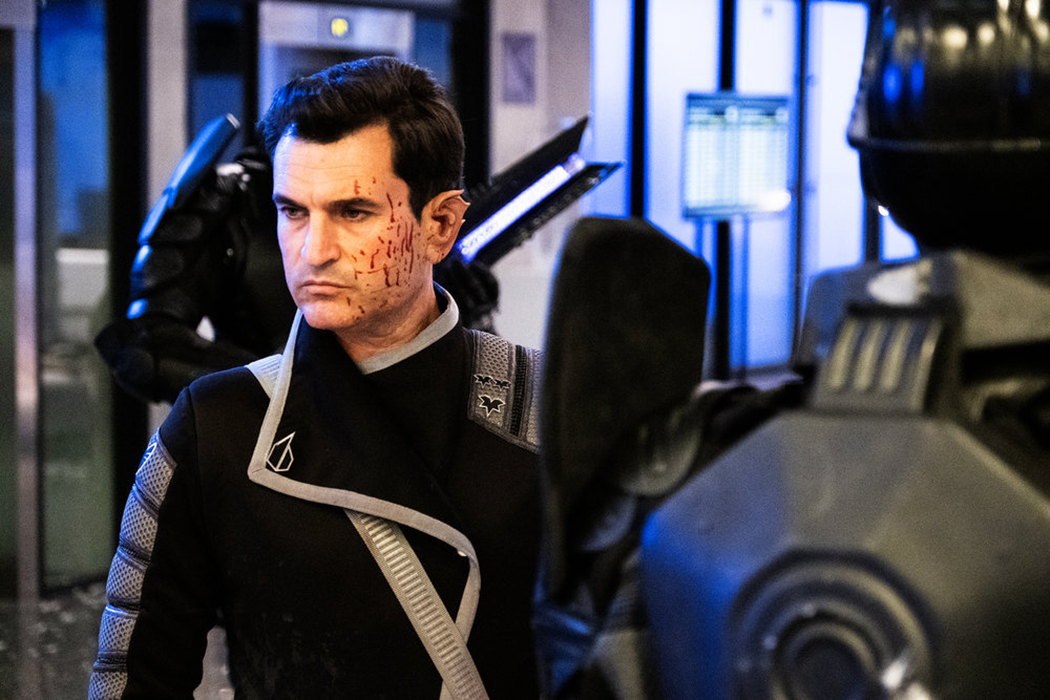 She’s going to go get Isaac and rescue him and tells Hath (Who is okay leaving Isaac to his fate) that she doesn’t leave anyone behind. Sometimes the needs of the one do outweigh the needs of the few or the many (Sorry, Spock). And this is when the shit hits the proverbial “let’s fight it out” fan, baby. And I loved it.

But before we get to the blasters and sticky pink cluster bombs, let’s talk about Isaac for a minute. Not the brightest light bulb in the chandelier, but he’s got a lot to like in terms of loyalty, toughness and a sense of right and wrong (Hey, he’s been a faithful husband all this time away from Earth). So it’s a boatload of fun to watch he and Lazaro (who has arrived) spar in the interrogation room. Truthfully, I think Lazaro is happy that Isaac won’t talk because he seems to really revel in the physical beating of our boy.

In fact, at one point, before applying the final boot to Isaac’s face, he tells him that’s the most fun he’s had all week. There’s a change taking place in Isaac’s world as well. The enmity between he and Elida has essentially vanished and they have redeveloped a loyalty and care for each other that likely is stronger than when they were simply business partners. And Lazaro administers a nice beating and leaves Isaac bloodied, tied to a chair in the middle of the floor.

Not a pretty scene and a reminder that for all the fun and light-heartedness of Vagrant Queen, there’s this slice of the show that’s got a gritty vibe. I like the impact that brings – it’s all light and fun and snarky and then – blood spatter and some suffering. It works. 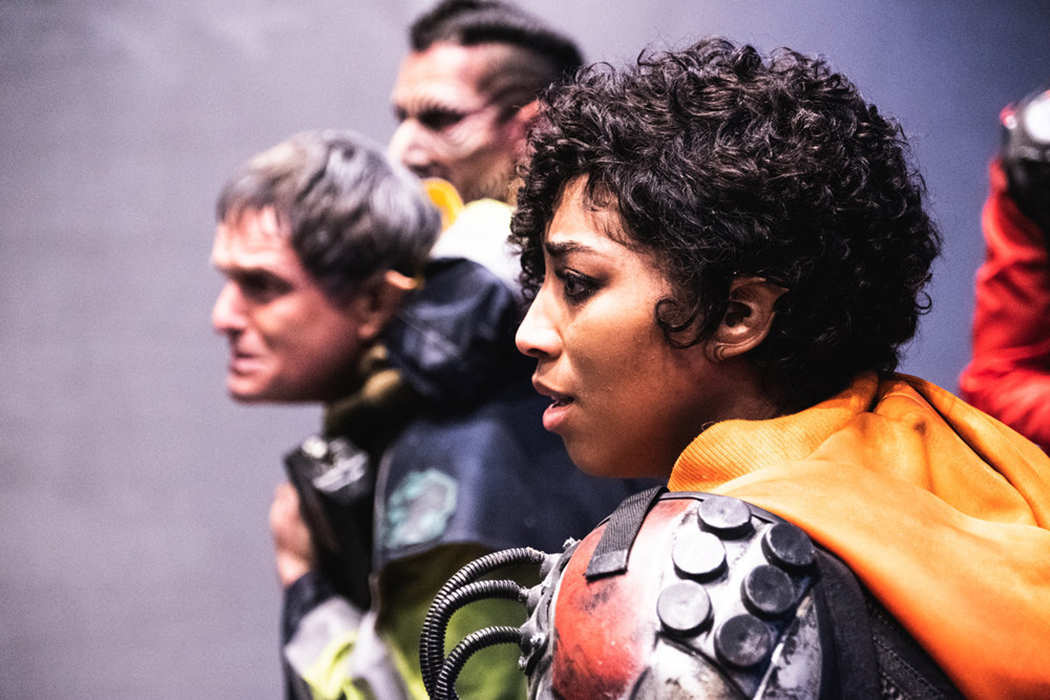 Natually, Elida and Hath, with some nice computer hacking from Amae, eventually find Isaac and drag his sorry fanny up and out, and then the blasters start firing. As an aside, I’d love to know what athletic stadium a large part of this was filmed in. Come on, that configuration, the stairs, parts of this were filmed in a sports stadium of some kind, right? Okay, that’s just kind of my personal interest. You probably don’t care that much.

Eventually, Elida, Isaac and Hath burst into the concourse area of the terminal where the Arriopa 3 are waiting for them. Let’s commence to fighting! Elida, Hath and the others start blasting their adversaries in an effective and bloody way (Note: stop action sequence shows up again). It’s a firefight that’s well done, lots of fun, and once again demonstrates an intriguing level of badassery on the part of Elida. She’s kicking, she’s shooting, she’s diving, she’s somersaulting (Note: Adriayan Rae did that stunt herself. Kudos), she’s sprinting and doing it all while firing and killing guards. Oh, she’s not alone, but we get a fun little reminder of her deadly skill set.

A couple interesting things here – while I’m not a huge fan of Clive, I did appreciate his good sense of humor. However, as a personal note, I’m not a fan of tentacled creatures. Honestly, they kind of creep me out, so Clive was an acquired taste for me. However, by the end, I was more than a little irritated that Lazaro, in that cool, intense and detached way, blew a hole in Clive’s chest while calling him a royalist sympathizer. At that moment, I was sorry to see the cheery creature that was Clive fall to the ground next to the slurpee/slushy/squishy machine. 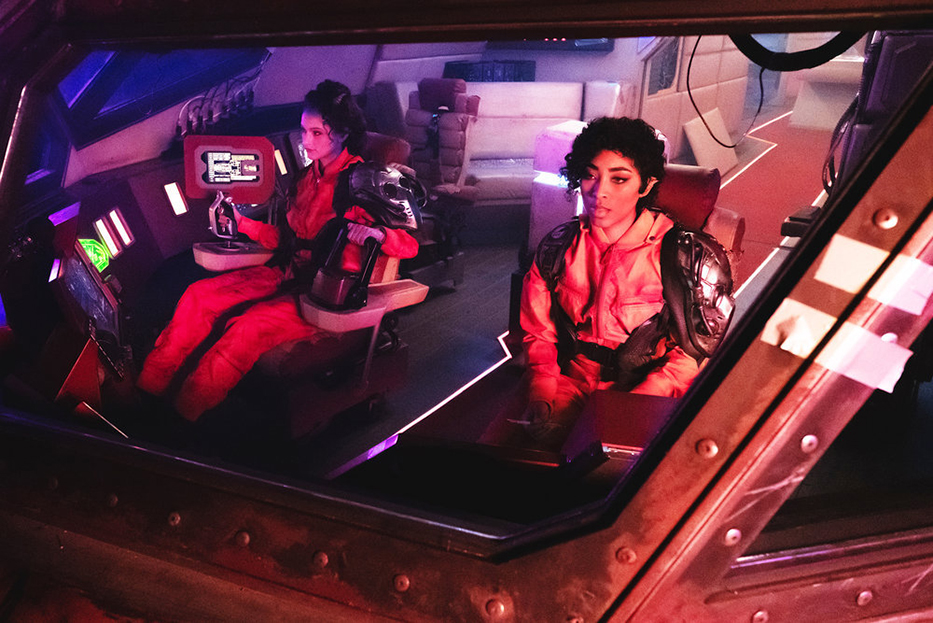 Secondly, I was fascinated by those pink balls that when exploded, trap people in their vicinity in a pink goo. This weapon was used to good effect by Elida and others several times in the episode. I remember thinking, “What a fascinating idea. Wonder if there’s anything like that currently available in real life?” You know, it’s one of those things you kind of think about when watching a sci-fi, futuristic show – how close are we to actually having that?

Anyway, those were two developments that alternately bothered me and got me to wondering. So there’s that, which I find compelling. I like a show that draws me in, makes me think and wonder, as well as react to the predicament of people within the show. Isaac’s beating at the hands of Lazaro was another one. Lazaro, a character I really like, kind of pissed me off. It’s clear he’s got a childlike love of hurting things.

Or, perhaps the hunt for Elida has truly pushed him around some sort of emotional and mental bend. I mean, 15 years of searching in vain has to take a bit of emotional toll, right? Anyway, he was full-on Lazaro in this one, folks. I felt him getting stuck in some pink goo was the least that could happen to him.

But through all of that action, our heroes made their escape. Well, most of them did. Clive is obviously not making it back to the ship and Ihred, our blue-skinned royalist, demonstrating great courage and resolve – as well as the use of ultra-strong armor – goes hero for us. Using special armor she “liberated” from a guard, Ihred holds the doors open allowing everyone to get out. Sadly, the doors closed before she could get through and we don’t know what has become of her. Our blue-hued savior is now missing and presumed captured, but we’ll find out for sure down the road. 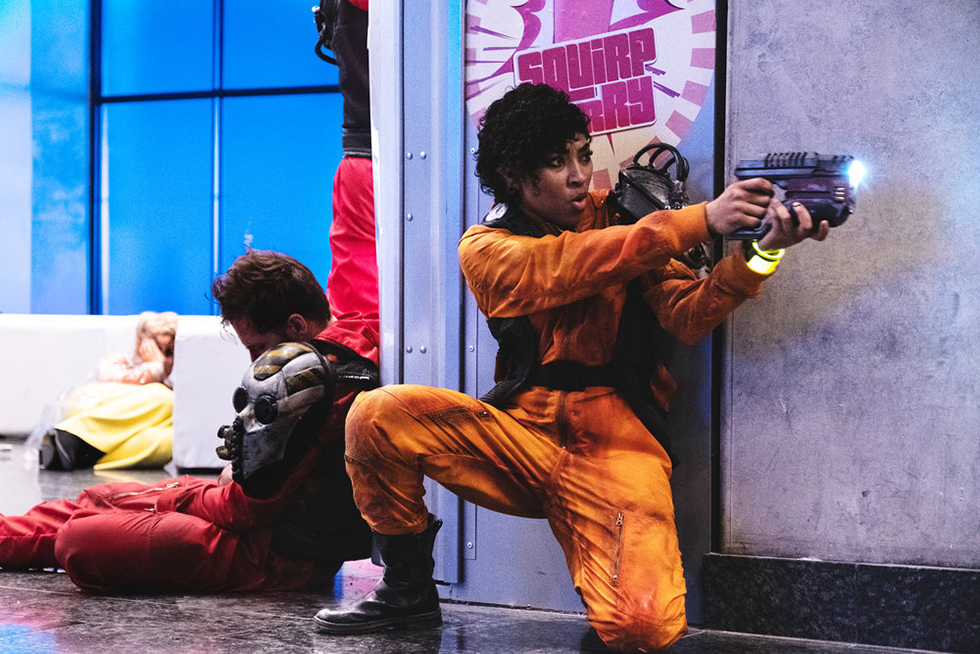 Funny, she’s always had this kind of meekness to her, but in the midst of the firefight, shouting out her fealty to her queen, she spring into action and really saved the day. It was another good and giving moment in a show that sprinkles them throughout episodes in a sneaky kind of way. Again, you can get trapped into thinking Vagrant Queen has only certain elements within it and then you get a reminder there’s more under the hood than you expect. I think it’s an attractive trait – at least to me. It keeps me interested to see who steps up and surprises each episode.

In the end, the Winnipeg is through the gate and into Republic space, where the flying is free and easy until the aforementioned asteroid storm. The Winnie gets beaten up pretty badly and eventually finds its way to the planet they were after, semi-crash landing on the sandy planet. From here, things should get interesting. It’s likely Lazaro has some idea of where Elida is headed.

There is a part of me that wonders if Isaac gave up some information, prompting “The Laz” to end the torture? No way, right? Mmmm, now I’m wondering. I guess we’ll see what transpires in episode 105. One thing’s for sure, if you think Lazaro isn’t going to show up on that planet, you don’t know this nut job very well.