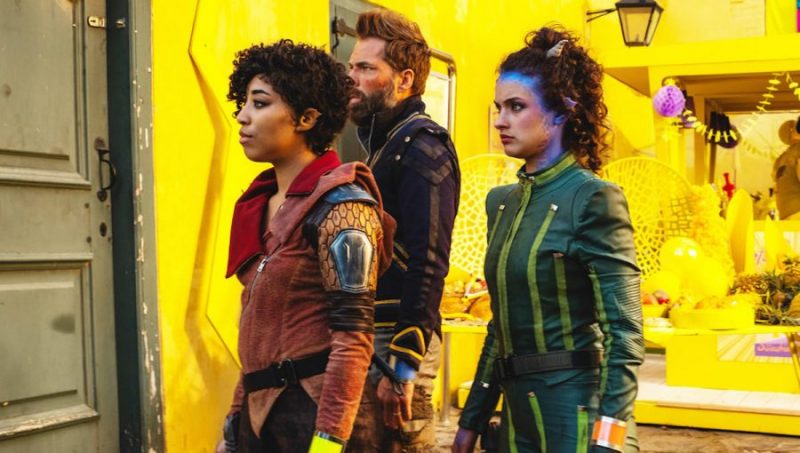 I’ve seen a lot of fight scenes that I enjoyed – some bloody, some funny and some that didn’t quite hit the mark. Fortunately, episode 106 of Vagrant Queen, “Requiem for the Republic,” delivered some pretty fine group violence that featured all of the traits that I tend to enjoy in a banquet room brawl. It was quite the Lazaro masterpiece.

The Republic’s prodigal son has returned to Arriopa with the Sterzaad dangling smartly around his neck, mind control at his beck-and-call, and he makes his displeasure with the Republic’s Admiralty known in various and sundry ways, paving the way for some wonderfully delusional hopes and dreams. Yes, episode 106 of Vagrant Queen is smart and sassy testament to all that Lazaro is and what he hopes to be in the future – with Arriopa along for the ride. And if its beginnings are any indication, it’s going to be a wild ride, indeed.

But first, you must be informed that SPOILERS are ahead. So, if you haven’t seen episode 106 and don’t want to be SPOILED, stop right here. If, on the other hand, you’re curious about Lazaro’s mischief on Arriopa, feel free to keep reading. It’ll be worth it. 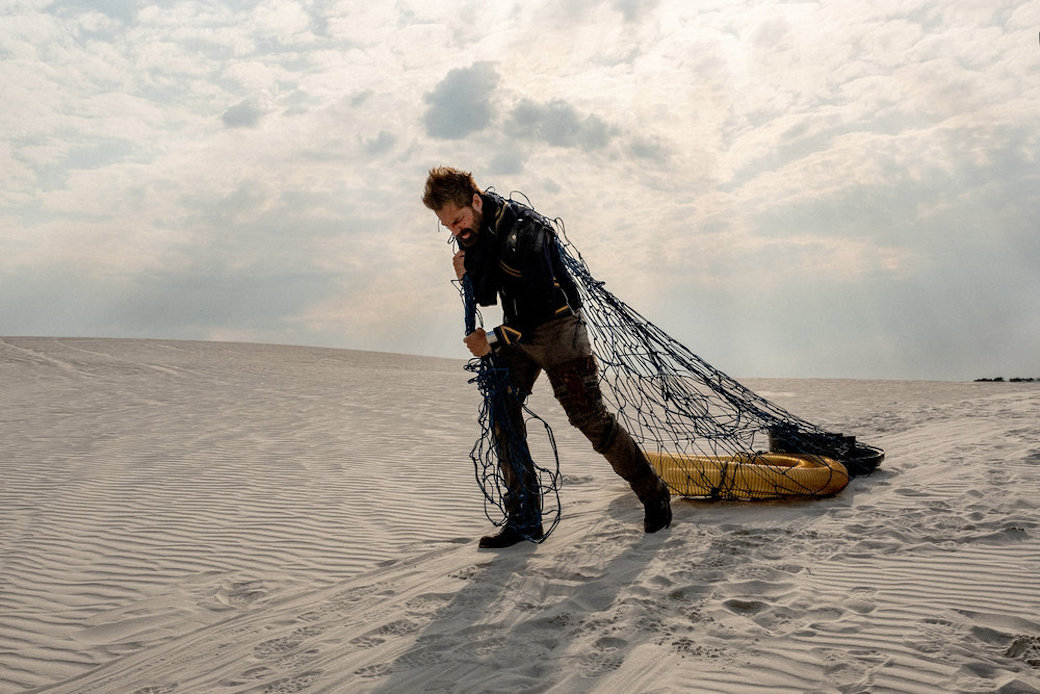 I have to offer my kudos and fan joy to Paul du Toit for his portrayal of Lazaro. He has created and infused this characters with a cold, calm, humorous malevolence that’s quite a sight to behold. Lazaro teeters between lucid realization and nut job disconnect on a scene-by-scene basis – often with a tune on his lips and joy in his heart. It’s delightful to witness. I think Paul’s work is splendid and in this episode we see all that Lazaro has to offer. It’s beautiful. I admit it, I’m #TeamLazaro.

In short, Lazaro returns to Arriopa to confront the ruling body about a litany of personal affronts he feels he’s been forced to swallow. It’s interesting here to note that Lazaro sees the Republic’s rulers as very much like the monarchy he helped destroy 15 years earlier. He references the needs of the people here, as he’s done several times before, not realizing that he’s slowly morphing into a brutal despot himself.

He sees himself as the savior of the people, but we can all see that through the Sterzaad, he’ll simply control and destroy those who oppose him – or simply amuse himself with their pain or death. It’s the classic delusional despot gambit. 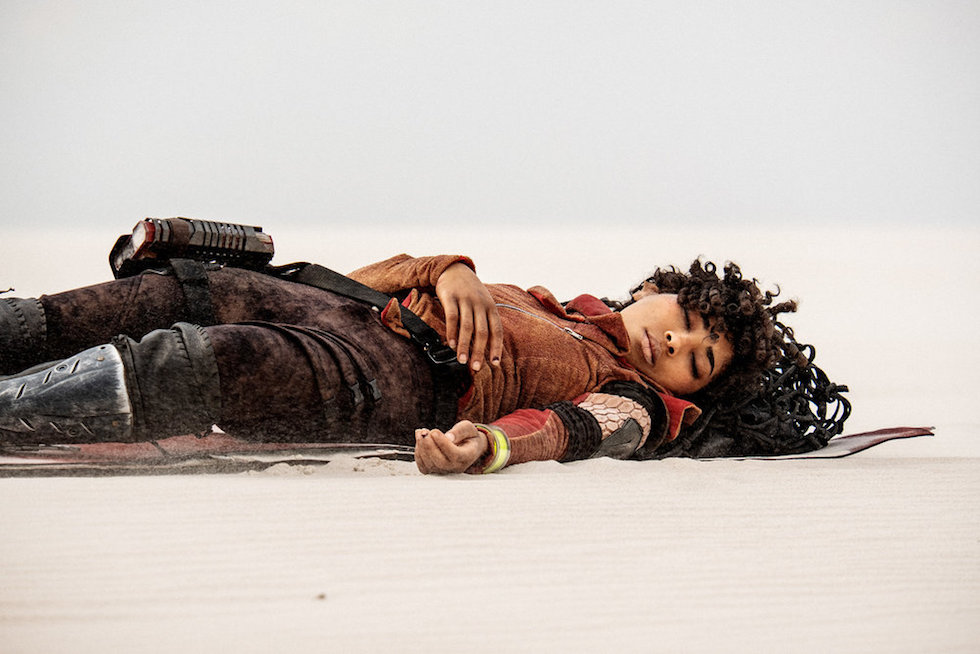 But the first step in all of that is dealing with the Republic’s ruling council and in wonderfully elaborate and imaginative Lazaro fashion, he blows into the chamber not as a prisoner in chains, but as something of a conquering hero, intent on finding just the right title for the role of leader he’s about to claim. But first, the admiralty.

And this is a fun, fun moment of entertainment as he rattles off their collective shortcomings and insults towards him and the people they are supposed to serve. All the while, under the mind control of the Sterzaad, he begins putting dining utensils and other items in their hands as they sit transfixed. You can sense what’s coming, right?

Got to love the last guy who was handed a big old floppy fish (Was that moment improvised or delightfully pre-conceived?). The message is painfully simple. The admiralty will throw down in a dining room brawl with the lone survivor getting to be his gofer/toadie moving forward. There are forks to the eyes, knives to the throat, bottles across the face, all while Lazaro sips champagne and enjoys the spectacle of blood and violence exploding around him. He’s a despot-in-the-making in total control.

The people he had learned to revile are now killing each other with spoons, bottles and all assortment of meal-time items. I also enjoyed the stop-action approach again to really emphasize the brutality that was taking place. It’s a fun effect and one that I enjoy the hell out of during battles and fights. Bloody violence bothers Lazaro not a whit. 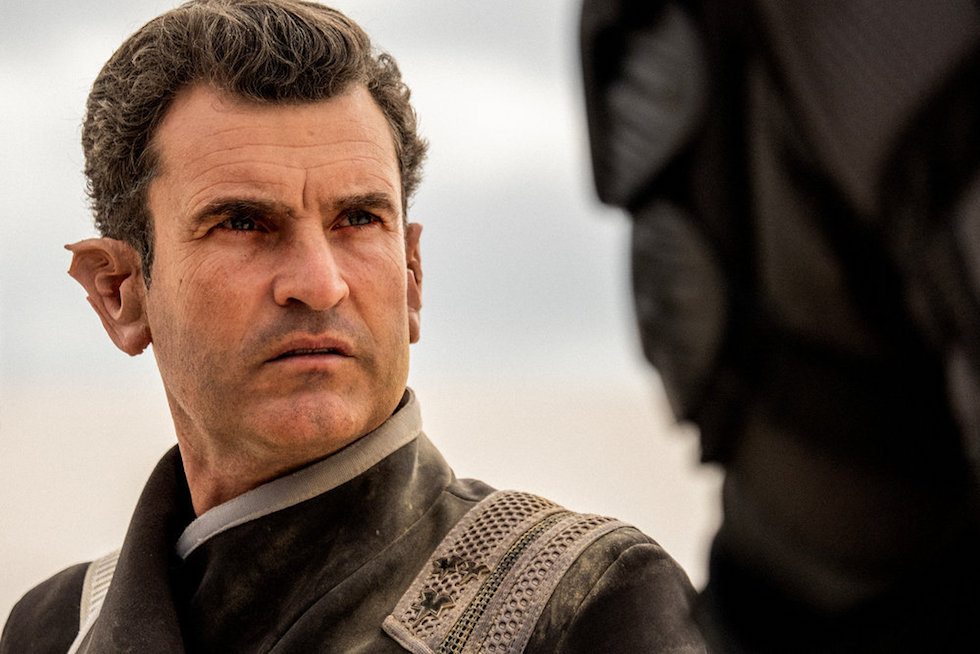 In the end, only one survives to be his boot-licker and there’s another pure Lazaro moments when he does a little play-by-play of the winner trying to finish off her opponent with a dull spoon. Again, Paul du Toit really shines in this episode. There’s almost a lyrical mirth to his attitude during his ascension on Arriopa – he’s really enjoying the moment and the promise of a future that only he can really envision.

The violence is just a means to an end, an end he fully believes will make things better for the people the Republic is supposed to be helping. Of course he’s fooling himself. He’s about Lazaro and what he feels he’s owed.

There’s still a good amount of that idealistic young man who led the revolution against the monarchy 15 years before, but there’s also a hardness and coldness to it. Lazaro has become the narcissistic bully who thinks he knows what’s best for everyone. And while touting the needs of the people being met, he isn’t above whittling down the populace to achieve what he’s convinced will help everyone.

His disregard for human life and suffering is all over the place – note the guard told to jump off the balcony for irritating Lazaro, then told to keep it down as he writhes in pain on the floor. Ice, ice, baby!! 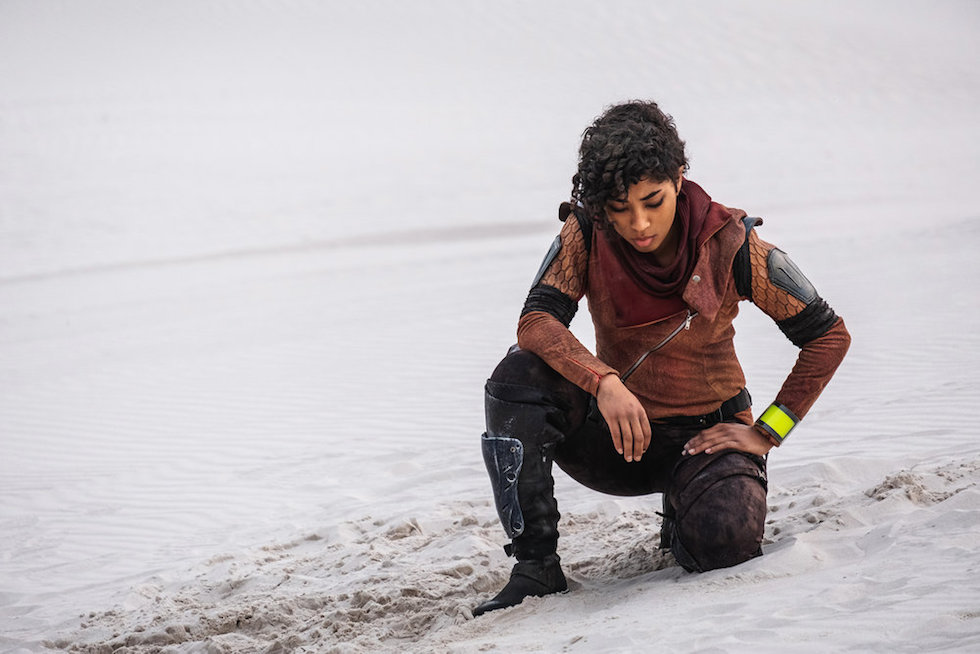 Lazaro is such an interesting and somewhat terrifying character, but with this nutty, fun spin that really makes the horrible even worse. He’s truly a “three decker sauerkraut and toadstool sandwhich with arsenic sauce,” with a smirk. #TeamLazaro.

Meanwhile, on the planet Wix, Elida is dealing with the emotional toll of multiple betrayals of her trust, something she doesn’t give out easily. Adriyan Rae does a sparkling job of conveying the pain and hurt of what has befallen her on Wix. From Isaac’s traitorous act to the lies of Hath – then compounded by Lazaro rolling in and escaping with the Sterzaad, the whole visit to Wix has been an emotional gut-punch for our reluctant would-be queen.

Rae really takes us through the litany of emotional struggles in this one. What I really enjoyed here is that the actor does as much non-verbally as she does with words. The hurt is real and it’s deep and Rae takes us there with body language and her eyes, etc. It’s wonderful work and it’s hard not to feel that there’s emotional pain really at work with her. That’s a testament to Rae’s talents and commitment to the emotions of the situation. She make me smile. 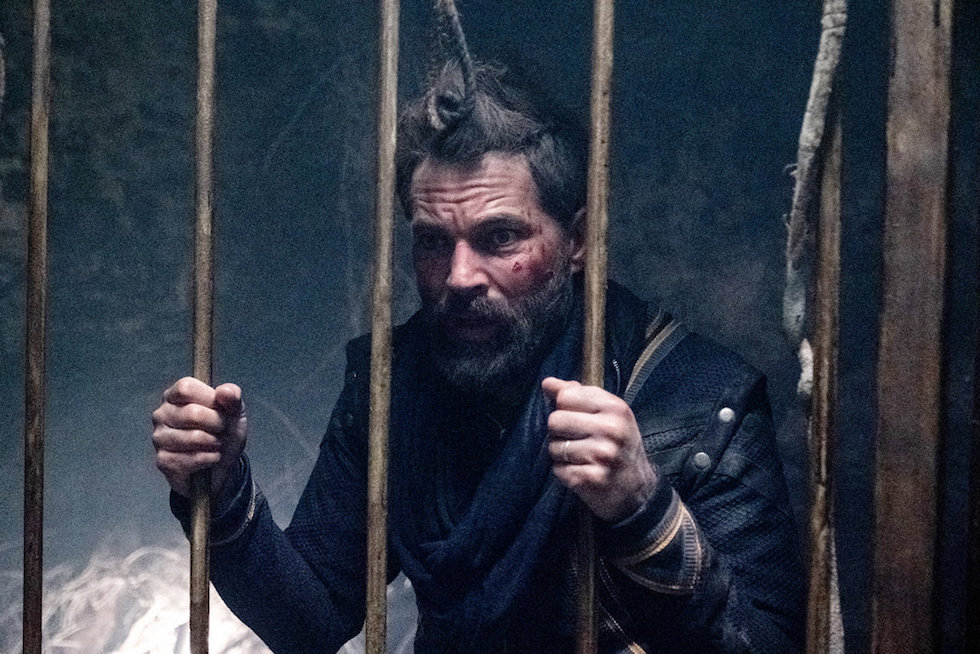 Wix and it’s sandy, desolate landscape, is perhaps a fitting backdrop to Elida’s emotional state. She’s done with Isaac, done with Arriopa, done with all of those things that she used to, or should, care about. Caring simply led to more pain and betrayal. She’s not having any of it anymore. So she’s on Wix with Isaac and Amae looking for a way to fix the Winnie and get on with their lives.

The search for the parts that flew off the ship upon landing is one and everyone is kind of dealing with their own issues now. Amae is counseling patience and understanding, Elida is pissed off at the world, and Isaac, it seems is coming to a new sense of realization about who he is and what he’s become in his desire to get home, and the very real possibility that his wife and child have moved on without him. Let’s be honest, there are some strong, hurtful words tossed into the air on Wix.

Isaac, in the aftermath of his betrayal, is in a very tough emotional place, too. Tim Rozon does a terrific job of showing Isaac’s unpleasant realizations about himself. Rozon does a great job of conveying Isaac’s regret not only with words, but also with body language. As pained as Elida may be, Isaac has the downtrodden look of someone who realizes they are utterly defeated emotionally. It’s good work and I enjoyed the hell out of it. 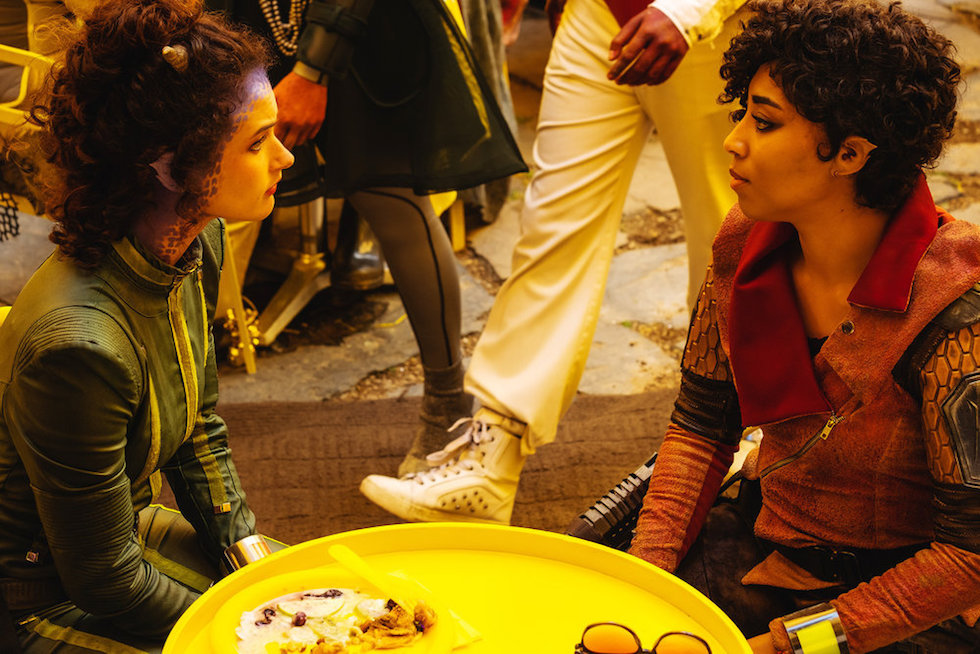 As for Amae, I posited the theory that our free spirit optimist had become the show’s moral compass on many fronts. I tend to hold to that theory in episode 106 as she offers safe counsel and calm opinions about what has transpired. She sees the three of them (and Winnie B) as a team, as a family at this point, which is obviously sooner than Isaac and Elida see that.

Amae (Alex McGregor, you are delightful) sees the family unit forming and wants to keep it together because she can see that all of them need family – despite the hurt they’ve caused. It’s a mature take on Amae’s part, one that shows a level of maturity we may not have known she possessed. Amae has kind of been the “glue” character in the last few episodes and it’s a role I think is significant.

Now, the other fun part of this tale, aside from Lazaro doing his nutty thing, is that Elida gets stung by a bug on Wix and immediately takes a trip and doesn’t leave the farm (Wildwood weed reference. Jim Stafford. Look it up). She’s tripping big-time from the toxins in the sting and we get a little Isaac redemption as he saves her from walking off a cliff, then a second time after the pair are captured by some “beetle people.” God bless him, Isaac is trying. There’s a ton of hallucinations going on for Elida as she tries to sleep things off, including a visit from her mom. Interesting, that. 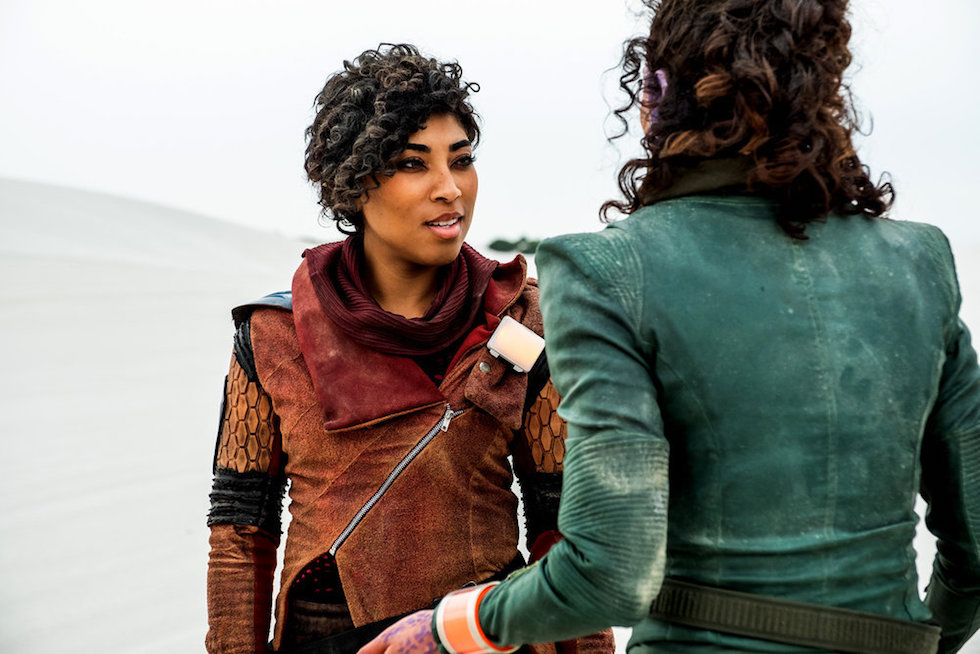 Fortunately, all get back aboard the Winnipeg and head off to the planet Carillo, where Elida is ready to sell the Winnipeg, split it three ways, and they can all go their own ways. Again, Amae isn’t giving up, offering to buy the Winnipeg. Then Isaac gives us a little glimpse into what he termed “Isaac 2.0.” Again, there’s emotion, sadness, hurt and a lot of underlying issues going on when our trio are faced with a very real problem – their ship is gone. Probably towed by that parking authority group that we’ve had some hints about. So it appears no one is going to leave Carillo for a while.

But now the shoe is on the other foot as Lazaro will likely become the hunted and Elida the hunter. Despite her desire to cut ties with everyone, it’s hard not to imagine that the latest indignity from Lazaro will not flick a switch on. I think this flipped dynamic will be be a fun dash to the end of season 1. And I’m hoping we get the kind of Lazaro-Elida showdown we’ve all been envisioning. But first, gotta find the Winnipeg.