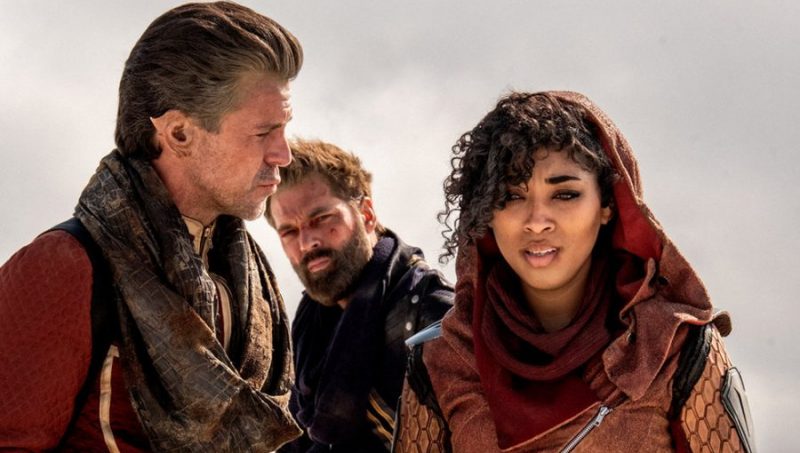 I’m torn about what I witnessed in this episode of Vagrant Queen. I mean, there were not a lot of positive and glowing moments in this one as deceit piled one upon another and the idea of trust completely swirled down the toilet. And then there’s freakin’ Lazaro, popping in at just the right moment to make the whole sad, unpleasant affair even more sad and unpleasant.

If there was ever a moment for your heart to go out fully and completely to Elida, episode 105 was that long, unfortunate moment. Any dreams she had, any trust she’d built up, was obliterated in a cloud of reality that had to hit hard and deep. Man, did I not see all of that coming – some of it, but not all of it.

And before we head off to talk about episode 105, “Temple of Doom,” this is where I forewarn you that SPOILERS are ahead. So, if you don’t want to be SPOILED, go not a step beyond this warning. If you’re okay with more info, then by all means let’s talk about this gut-punch of an episode. 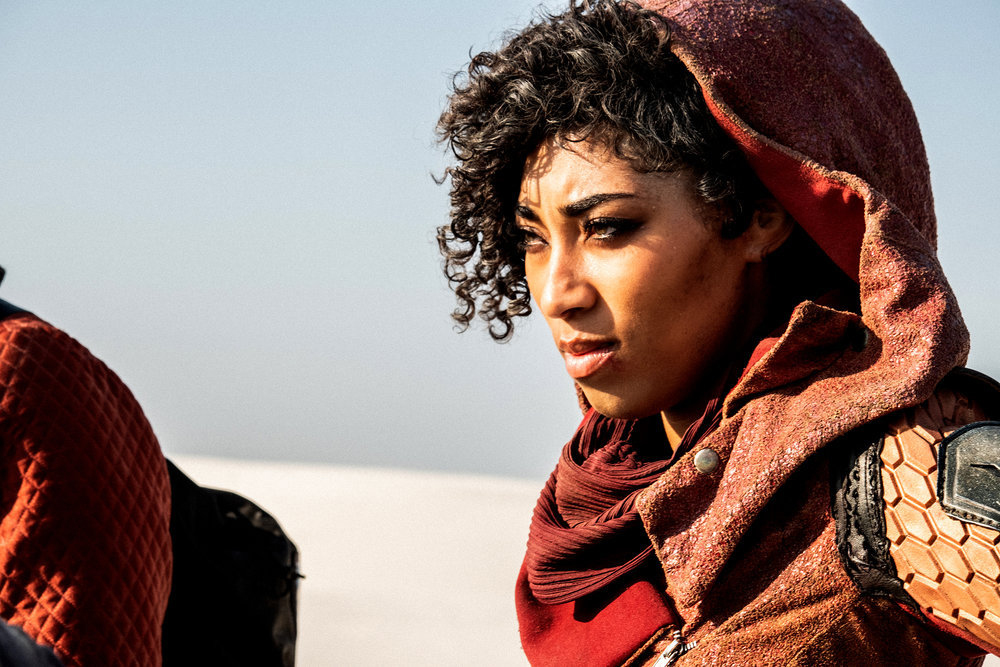 What I did like about this episode was that we got a bunch of backstory on Isaac. We see his wife and unborn child just before he’s blown through a wormhole of some kind when things go horribly wrong during a project in Jupiter’s atmosphere. And let’s be honest, I’ve never really trust Jupiter as a planet. Now I know why – the shit hit the fan and Isaac is sucked into the hole and dumped in another galaxy. Again, a crushing development for a man who is obviously devoted to his wife and then-unborn child.

It also gives us clues as to his passionate desperation to get back to his family. In the end, his devotion and loyalty to Elida, Amae and the others was always secondary to his desire to get home. And with that, we eventually find out that the culmination of things on Wix is a direct result of that desire. Remember last week when I lamented the cruelty of Lazaro as he beat Isaac in the holding cell? Turns out it was all an act. I’d posited the theory that perhaps Isaac has cooperated more than he let on and that’s exactly what happened, opening a door that the show’s resident evil-doer stepped through easily to win the day.

I’m torn between Isaac’s betrayal of Elida and his utter devotion to the prospect of getting home. Let’s face it, he makes no secret that that is his primary motivation for everything. On some level you can’t really blame him. Since it’s so obviously foremost in his mind, Elida and the others should remember that and have it as foremost in their minds. I suspect Isaac will redeem himself, but in this episode, he is the catalyst to something dark and sinister. But man, how do he and Elida come back from this one? 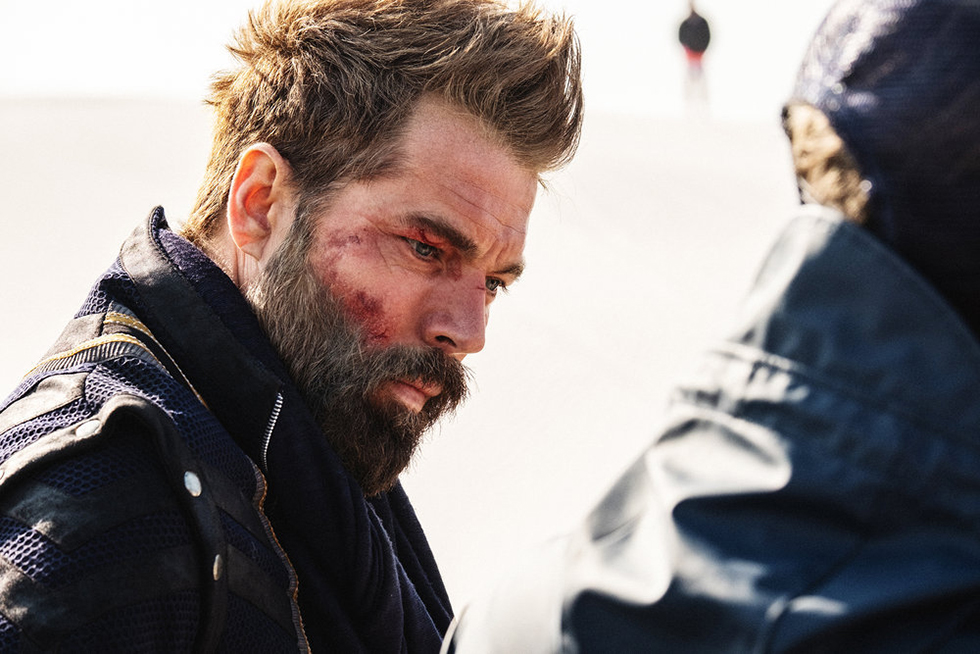 However, I do love backstory and I enjoyed the many moments that filled in some of the blanks of Isaac’s strange journey to this new galaxy. While tragic, it provides a backdrop to the decisions that he made – and ultimately made in this one. Unfortunate? Yes. But unexpected? Perhaps not.

More betrayal is at hand as our crew makes its way to the holy place that Elida’s mom is supposedly imprisoned in. Turns out, it’s a mostly-buried ruin that is neither prison nor domicile for her mother. The Loyalists, led by Hath, have dragged her to this spot to enable her to access the Sterzaad and use its power to take back their monarchy and exact revenge on those who tormented them.

It’s interesting here to once again see that Elida and Hath’s goals are not aligned at all. Hath feels his lie to get her there is for the greater good. Once again, that which Elida finds so hard to give – trust – is betrayed. I also have to note that given Isaac’s duplicity in coming events, his protestations are a little hypocritical, too.

One other thing. This planet wix is a sandy wasteland that gave me a Dune and Tremors kind of vibe. In fact, I got a bunch of different movie vibes while watching various parts of this thing. I did enjoy the worms in the sand, as well as the cute bunny-like creature that Isaac was convinced would do him harm – or barf. Tim Rozon really had a lot of good moments in this episode, conveying a bunch of different emotions and motivations. 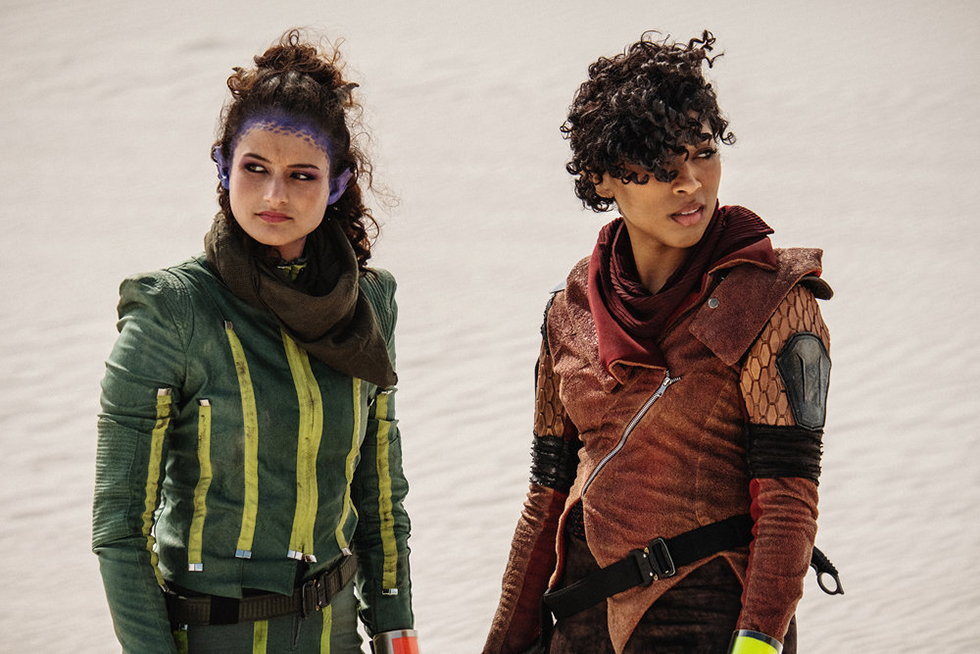 Loved his work in this one. We even got a look at him clean-shaven – handsome devil, that. Still, do the ends justify the means, my friend? That’s the question that hangs in the air over the latter part of this episode.

In the end, with the animosity running high, Elida decides to retrieve the Steerzad in the tomb. And man, was that an Indiana Jones vibe running through the hunt for the Steerzad? I was feeling it really strongly and it took me back to an earlier exchange between Elida and Isaac in sick bay. Isaac makes a reference to “Temple of Doom,” a movie he had made Elida watch and she has a moment of realization and says, “Indy.”

Then segues into how she doesn’t under how he can escape snakes, but not carbonite. That was a fun little Harrison Ford reference and as we discover, a little foreshadowing of what’s to come. However, kudos to the writers and show runner for that little gem. Loved it. Yes, Jem Garrard, I’m looking at you on this one. Smooth fun.

In the end, Elida puts the pieces together and the Sterzaad reveals itself, however as they are making their escape, Hath is trying to tell her the gem needs something else and that’s when Lazaro and his guards show up to make the party complete – and reveal that Isaac was the instrument of their arrival. 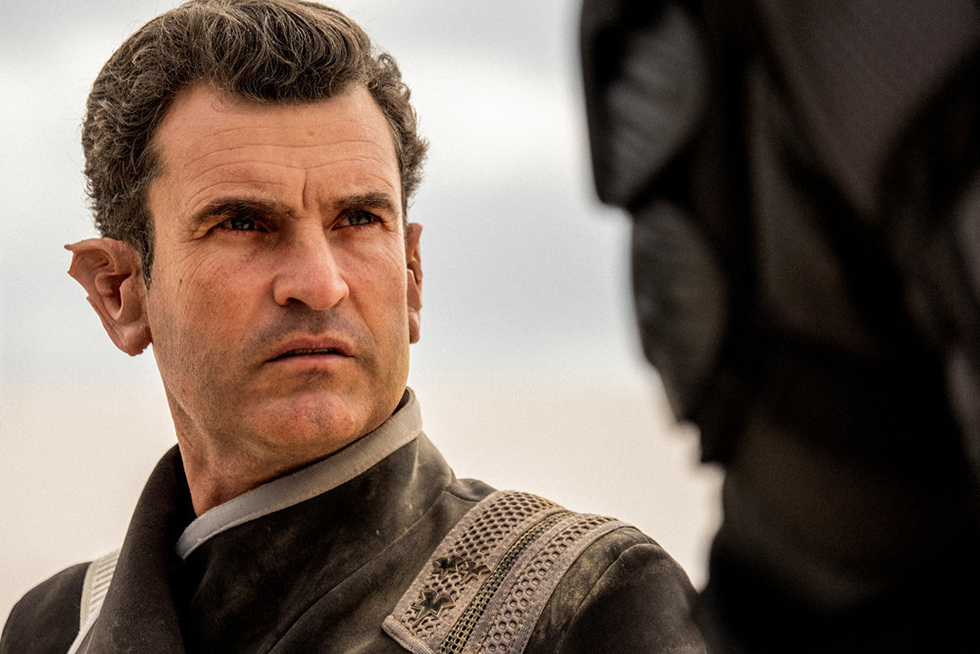 So we got the showdown, guns are drawn, Lazaro has the upper hand and in those tense moments, Elida gives up the Sterzaad, while Hath offers up another little item – the conduit. It would appear the Sterzaad doesn’t work without this other little item, something we discover when Elida tries to summon the power. Lazaro wryly notes that Hath had kept more from Elida than he’d thought.

In the end, we get ourselves a little stone temple firefight. Rocks are falling, guards are being shot and through the maelstrom, Elida loses some of her team while Lazaro scurries through the sand to what appears to be safety. Unfortunately for him, the Admiralty has declared him rogue and sent an army to bring him back in chains or dead. And it’s here we get to witness at last the potential of the Sterzaad. Lazaro places it in the conduit and asserts mind control over the guards around him.

I do have to applaud Vagrant Queen for giving these guards/soldiers/lackeys some fun little lines and moments throughout the show. it’s nice and fun to see the worker bees of the show get a little verbal run. A lot of shows don’t do that for the rank and file guard/soldier, but Vagrant Queen offers up these little moments and comments for the grunt solder in the field. I like it. 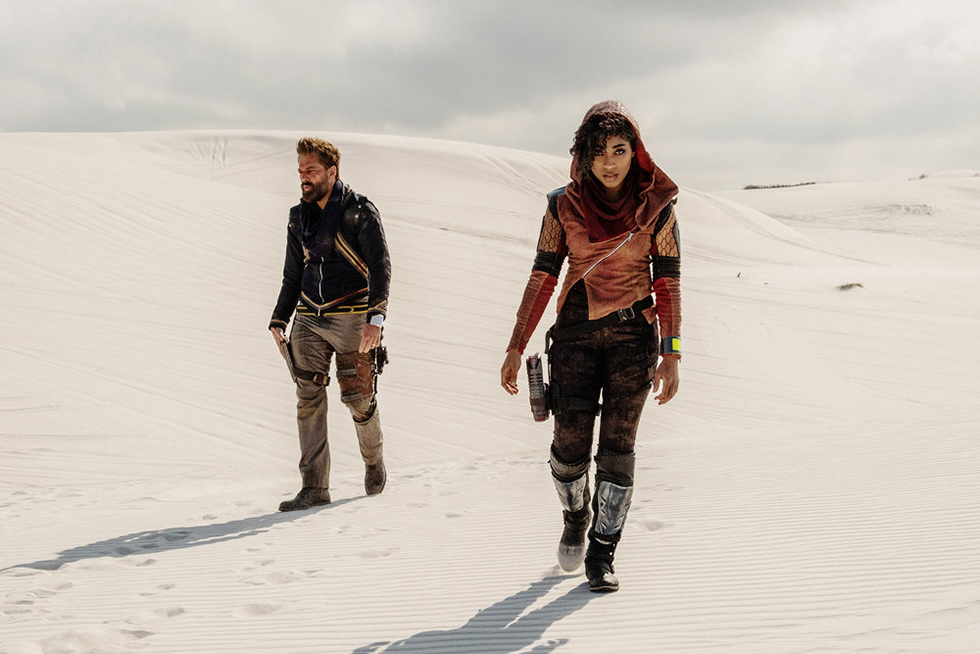 Let’s be honest, the mere thought of a man of Lazaro’s intelligence and cold-hearted malevolence in possession of a mind-control device makes the imagination dance with possibilities of pain, death and destruction. It would be my guess that the admiralty is going to get a visit from our “rogue” commander and it won’t be very pleasant.

It was sad to see two of her followers killed and Hath apparently buried under a pile of rubble, but Elida, Isaac and Amae eventually scramble to safety out another exit. And it’s here, on the sands of Wix, that you wonder if Elida will ever be able to trust again. I”ve got to believe that her heart and soul have been shattered by two people she trusted, or had come to trust, in Isaac and Hath. It was all a lie, from first to last and in the end, Lazaro swept in so easily and took it all away. No mom, no Steerzad and with a banged up ship in the sands, apparently little hope.

However, I think that just as Lazaro had turned the tables on Wix, that turning of the table may turn Elida from hunted into the hunter. And the prospect of that is more than a little appealing to me.

So while everyone bathes in the awkwardness of the situation and loss on Wix, Lazaro is no doubt winging his way home to Arriopa where I’m more than a little certain the Sterzaad is going to be used to chaotic effect. On one hand i’m a little nervous about what he will do, but on the other I’m sure it will have his cool maliciousness with a touch of style. And who doesn’t dig that?