Remember, only 25% of The Batman got filmed before the set closed due to the pandemic. Because of this, there aren’t a lot of scenes to flesh out a true trailer. Matt Reeves didn’t want to show up to DC FanDome emptyhanded, so a teaser was cut to give the fans a first look on what to expect when the movie is released in October of 2021.

This movie is restarting the Batman mythos once more, but in a way that shows the grittiness of Gotham City and how the Dark Knight is building his reputation through fear. It will exist in a different universe from the current DCEU Batman (Ben Affleck). He’s been working the streets for two years now and just starting to obtain the level of an urban legend among the criminal organizations. With his statement “I’m vengeance.” after thoroughly beating down a thug, the viewer witnesses anger still burning inside over his parents’ death.

The main villain for The Batman is revealed as the Riddler, but we only get him as a voiceover. Quick shots of Catwoman and the Penguin also flash by. DC made sure very little showed in the terms of plot. Showing the Riddler as the main villain confirms that The Batman will focus more on Batman’s detective skills over his fighting prowess—though being a superhero movie, action scenes and explosions are always a guarantee.

The teaser did accomplish one thing for sure—if fans were hesitant on how Pattinson was going to portray the Dark Knight, this displayed it and, seeing how Twitter blew up in praise after the teaser finished, they are excited now.

Finally, in SHAZAM! news, Zac Levi couldn’t release any information on the upcoming sequel, except for the official name and movie poster. 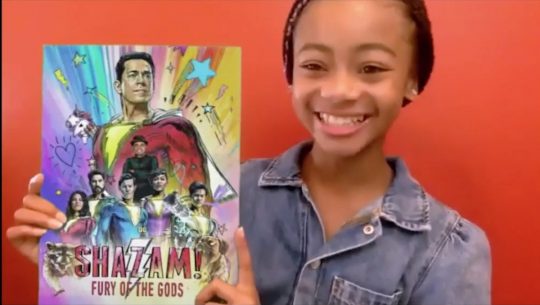 So get ready, because Shazam: Fury of the Gods is slated for a November 2022 release. Oh, and while Sinbad may or may not be in it (they added him to the poster for the event), but he did show up to surprise the cast during the title reveal.

That wraps up the movie news from DC FanDome, for now. DC Fandome will have a second event on September 12, 2020 encompassing all the pre-recorded panels that were originally slated for viewing on the website. It will be a more family-friendly environment, presenting what is coming to television, comics, books, and cartoons in the coming year.

Check back later this week when I’ll break down the two video game trailers that dropped—Gotham Knights & Suicide Squad Kills the JLA, plus news on the upcoming DC animated movies and the long-awaited return of Milestone Comics.