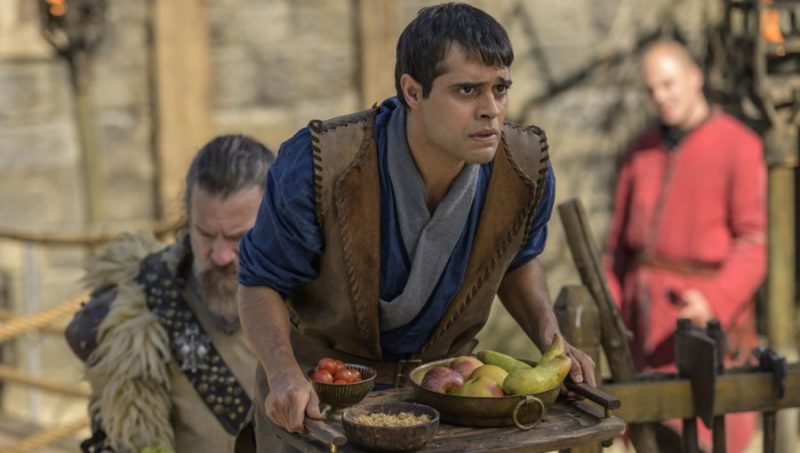 The more we discover about the Kinj on The Outpost, the more intrigued I get with questions that still are to be answered, or new ones that pop up. And for me, that makes for a satisfying viewing experience. Sunday’s episode 308, “Dying is Painful,” was more than satisfying given the little twists and turns that were tossed in our lap with a variety of Kinj in this episode. For my money, episode 308 was one of the more enjoyable episodes thus far in season 3A. Executive Producer Dean Devlin said on Twitter it was probably his favorite of season 3A – and I’m essentially in agreement.

There was Kinj joy all over the place in this one, and several interesting little moments that made you think, “Mmmm, I wonder what that means?” Again, some questions answered, but others pop up to keep us enthralled with what’s to come. The mind boggles at the possibilities, doesn’t it? Yes, even as I write this I realize how much I enjoyed this episode. And….I realize I’m obsessed with the whole Kinj concept of The Outpost. Just when I thought I was out, those damn Kinj suck me back in. And I’m pretty happy about that, actually. I know I’m not alone. 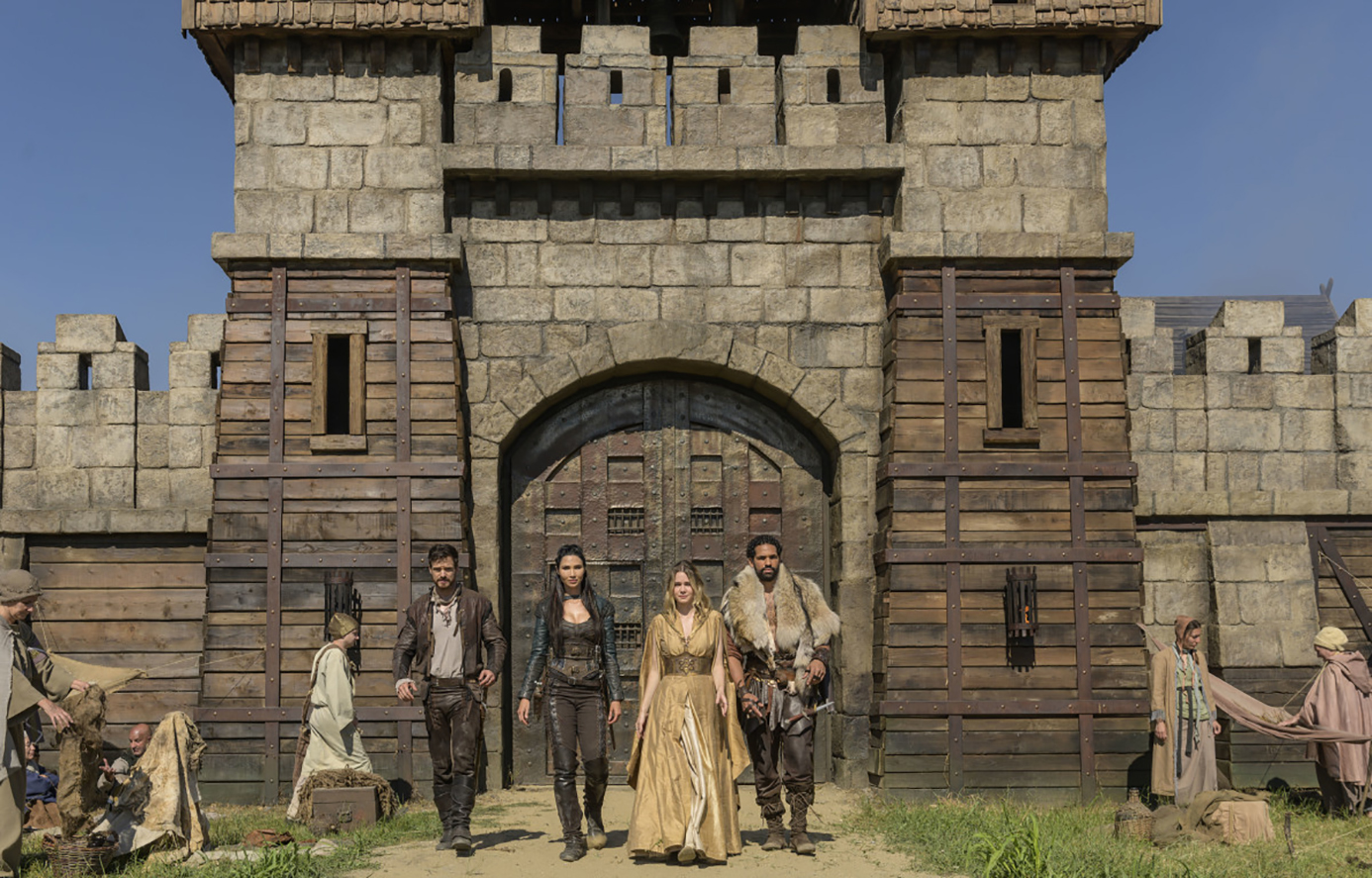 Talon, Zed and Garret get into the capital and manage to snag Tobin and Gwynn. Now, how to get the parasite Kinj removed without killing them? Wait, let’s kill them. Yup, that was the plan at last as Garret discovers that No. 2 of The Three resides in the dungeons. So, quick as a flash, Zed goes off in search of Yavalla and Garret and Talon head to the dungeons with the unconscious Tobin and Gwynn – there to make a deal for the healing power of No. 2.

Look, even without the wardrobe and death white make-up, No. 2 looks a little creepy. Long story made short, a deal is made with No. 2 to get her to safely to Gallwood Outpost in exchange for resurrecting Tobin and Gwynn after they are killed – and hopefully their Kinj is destroyed. I found it interesting that Talon insisted on choking Gwynn to death so that Yavalla could see her face as she did it. I also found it interesting that Yavalla was genuinely shocked to see that Talon would murder her friend. It was the only time thus far I can remember Yavalla being genuinely surprised. It wouldn’t be the last in this episode. So, some weakness from the goddess herself. Interesting.

Truthfully, there seemed to be a nice barrel-full of rage within Talon in this episode – and she wasn’t alone. Zed got a nice dose of sword-play and anger-management violence to enjoy in the episode as well. In fact, my episode MVP is Zed, who kicked some serious butt in this episode and proved to be a stealthy ally when most needed. Zed for the win? Yes!!! In fact, Zed appeared to turn into a cloaked ninja type operative as this episode went along – popping up a couple of times at opportune moments. Oh, I liked that a lot. 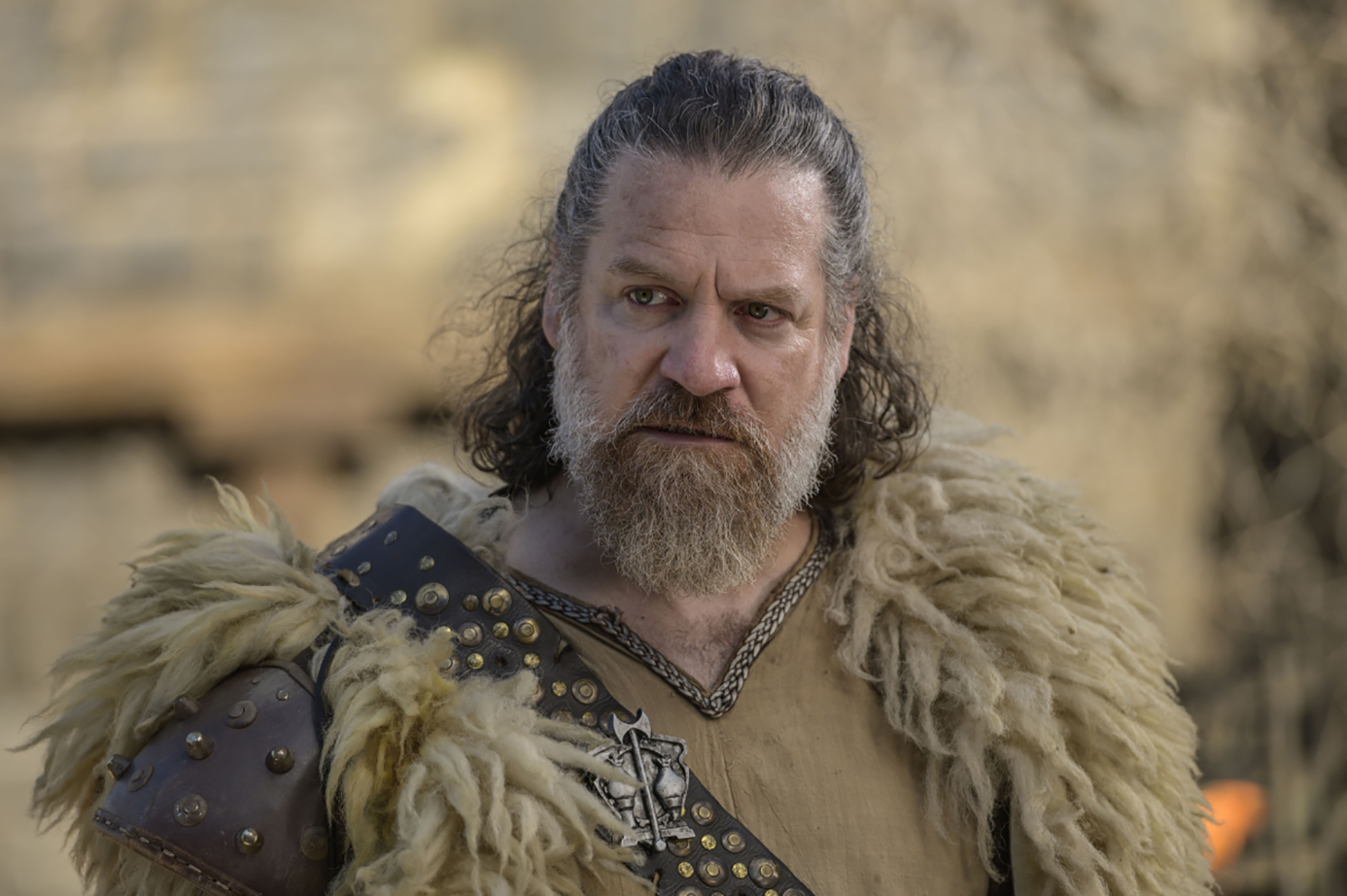 And Garret? Well, you can only imagine the conflict and rage welling up within him when he comes face-to-face with one of the three that broke and brainwashed him – and led him to kill Wythers. The sheer volume of rage that must have been dying to bubble to the surface can only be estimated, but to save his friends, he kept a lid on it. But you could tell he wanted to savor a little revenge for himself in that moment. Instead, he makes a deal to see No. 2 safely to the Outpost in exchange for resurrecting Tobin and Gwynn. Mission accomplished.

Interestingly, No. 2 asks Talon why she brought the white Kinj through the portal from the Plain of Ashes. When Talon tells her it was in the realm all the time, you can see No. 2 processing that information. Once again, The Outpost gives us a little twist in the Kinj story that makes us start to question what we think we know. It was one of those quick little moments that not only got us thinking with the words used, but with the facial expressions we saw. Very sneaky, Dean Devlin and crew. You’re just leading us around by the nostrils, aren’t you?

Meanwhile, back to the Outpost, Jaaris Kromm has created his own sick little fight club with the Blackbloods. What an odious, sinister, cool customer Kromm is. It seems that in his mind there’s nothing left outside the walls of the Outpost. He has this almost exhausted, cynical air about him as though all is lost and he’s trying to wring some type of enjoyment from what’s left through violence. The Outpost is the last bastion of safety and he’s in charge. And he rules with an iron fist and a penchant for bloody violence. He’s marvelously malevolent and just the kind of baddie that you really enjoy loathing. 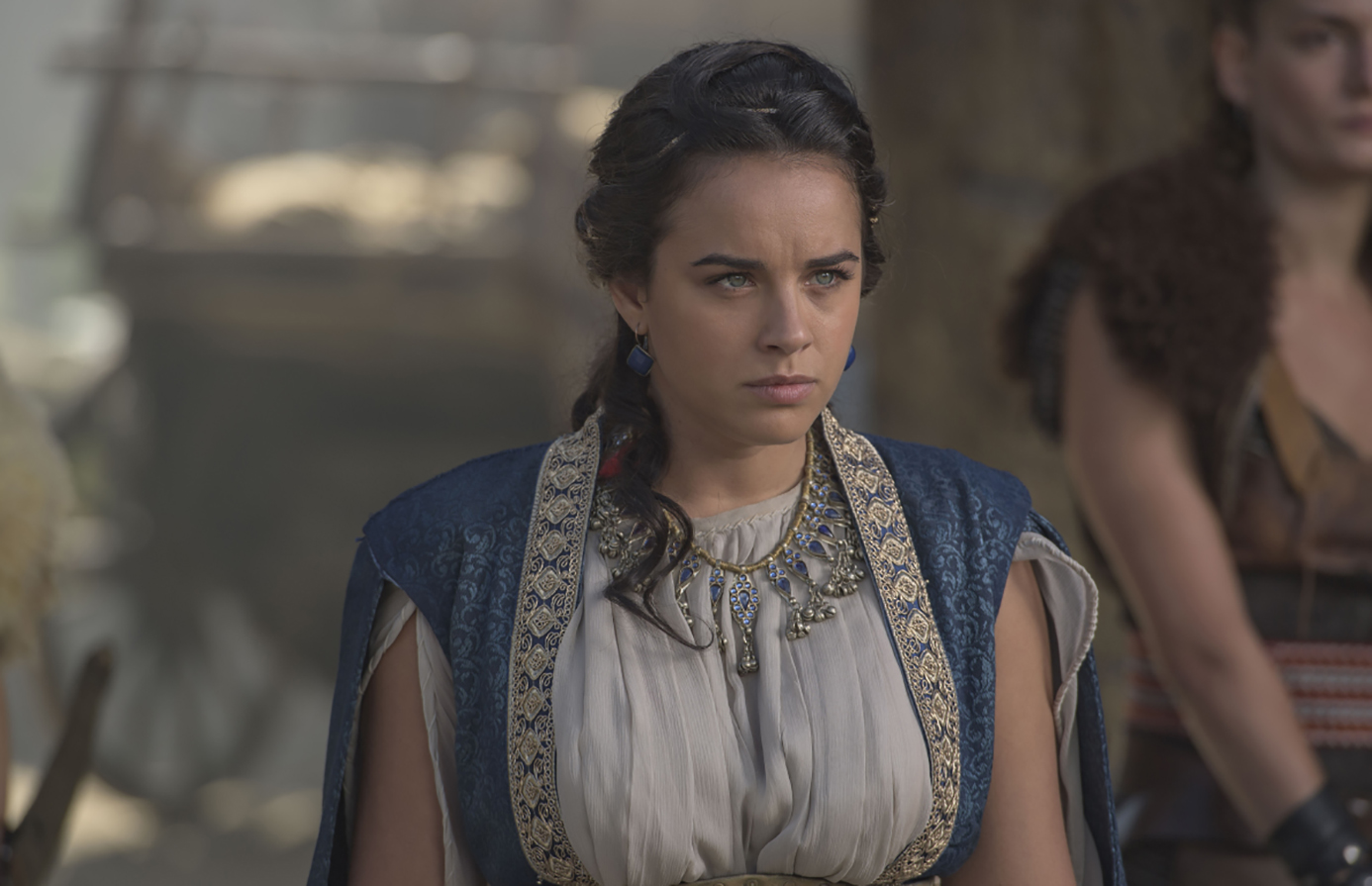 He threatens, he cajoles, he demands blood and we see the Wren, Janzo and Munt are essentially powerless to resist. Again, the red Kinj of pain is the leverage he uses to make sure he’s obeyed. And the bloodshed continues.

You know, on social media I’ve had some conversations about when and who we’ll lose this season. The Outpost has never been shy about killing off key characters and one of the people I was talking with used the word “foreboding,” which I thought apropos. And just for a minute, when Kromm himself entered the ring and bullied Wren into fighting him, I thought for sure we might lose her.

How she got there was interesting as one of Yavalla’s minions, sent there to infect Wren specifically, finally made her move. In an interesting twist beforehand, however, the minion defied Yavalla’s command and infected one of the Prime Order men who was giving her some guff. Once again, we saw Yavalla’s cool dissipate just a bit as her powers weren’t enough to keep this young lady on track. I found Yavalla’s shock and surprise during a couple of moments in this episode very fascinating. Is she losing control, or more accurately, is the queen Kinj losing control a bit? That’s an interesting theory to contemplate, right? 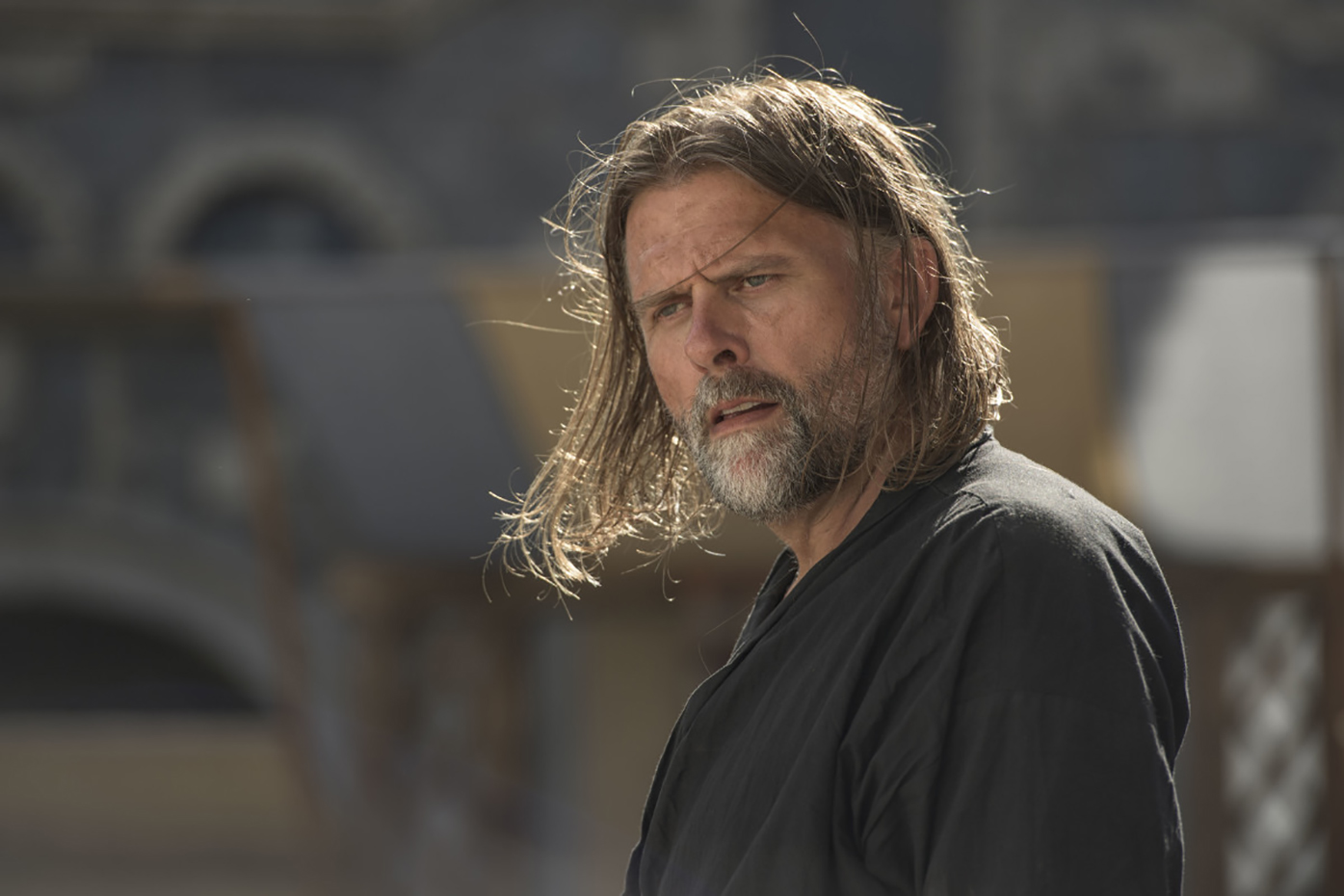 Wren is attacked by this woman, they fall into the ring, and Kromm comes to the rescue with his blade. But that puts Wren in the ring and Kromm, the Realm’s resident Grinch, decides Wren is next up for his fun. Janzo demonstrated his unique brand of honor by offering to take Wren’s place as she’s beaten. It’s a heartfelt moment, but Kromm has his bloodlust up and Wren is the target. Fortunately, Talon is there at a key moment and declares that if Kromm wants to fight, let’s get it on.

There’s been a lot of good fight action of late and this episode offered some of the best. Talon’s rage is on full display as she drops on Kromm like a load of potatoes. She cuts, she punches, she kicks and in the end guts Kromm with a nice little thrust.

Again, you could sense the rage she’s been carrying around got some exercise as she seemed to delight in thrashing Kromm from one end of the ring to the other. Honestly, I think it was somewhat cathartic for her. The stress of command, the struggles of the Blackblood-Human relationships, the frustration of chasing Yavalla — yes, it seemed very cleansing for her. Here was a foe deserving of pain and death. And she dealt it like a blackjack dealer in Vegas. Swift, decisive and inevitable. I thought it one of Talon’s better moments of late. All that frustration of things she couldn’t control – but this she could. And Kromm felt the honesty of “Dying is painful.” 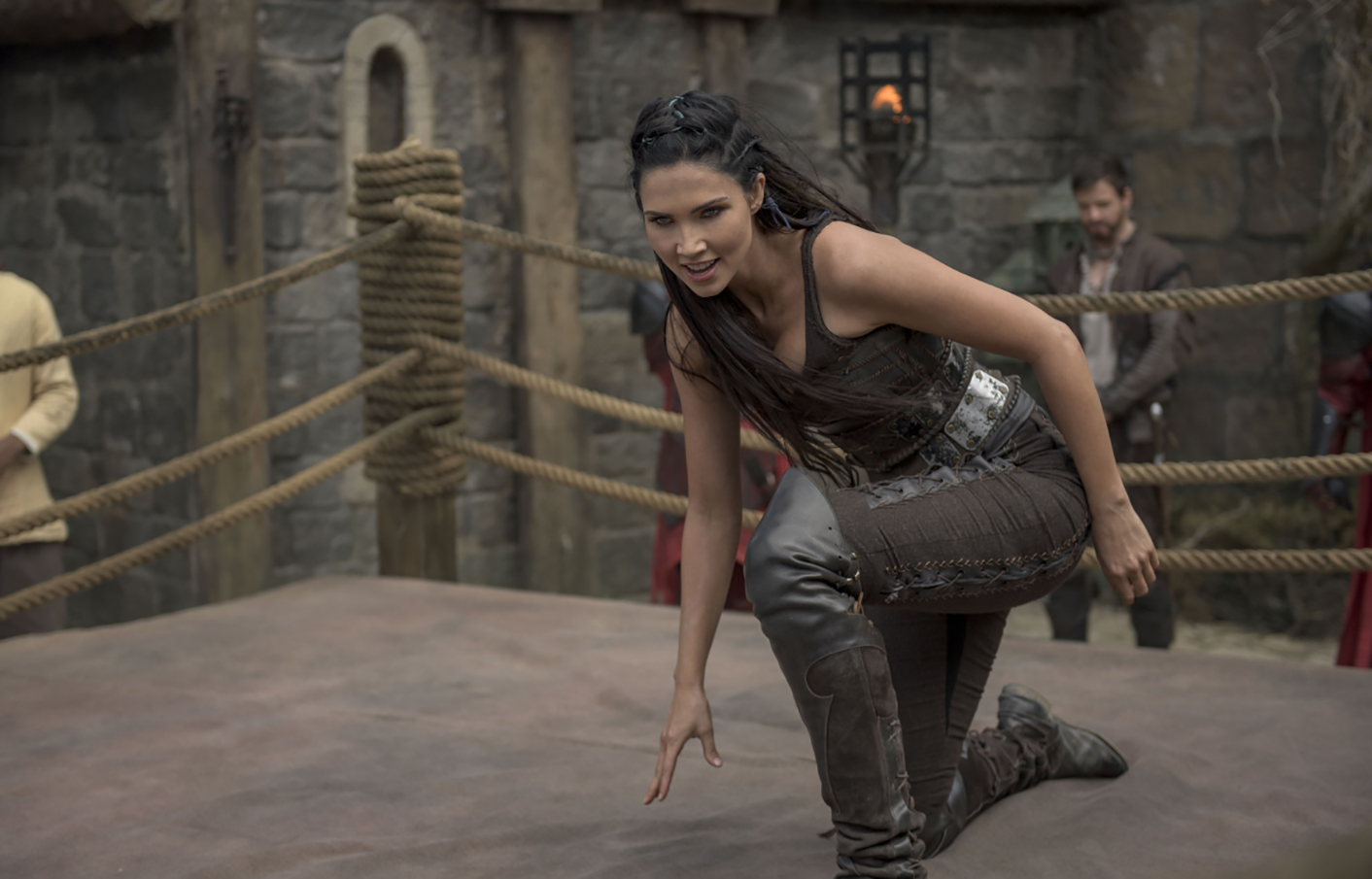 But wait, there’s still more Kinj mystery to bare witness to. The yellow Kinj would exit the body and dissipate upon hitting the ground after its host had died. But that wasn’t the case with Kromm’s red Kinj. Oh, it left the body and hit the ground, seemingly meeting the fate of the other Kinj we’d witnessed. And did you notice the reaction of No. 2 when the Kinj hit the ground. It really bothered her. I suspect there’s a connection between the Kinj of The Three.

Moments later, however, we see that Kinj reform and find a new host. Hello Falista, welcome to the Outpost. While I was sad to hear Gertrusha has been infected, it appears that you now are one of The Three in a strange, sideways kind of way. That’s right, Falista sought refuge in The Outpost only to be exposed to Jaaris Kromm’s brutality, then, when he’s dead and victory proclaimed, she’s innocently standing in the crowd and next thing you know the red Kinj is climbing up her leg. Now that’s a twist I don’t think anyone saw coming, right? But what does it mean? Will she be seduced by the dark side of that power or do something positive with it?

I love the flow of this show and think that it once again has hit a good, entertaining stride. The story is interesting and with plenty of twists and turns. The characters, while pretty well fleshed out at this point, continue to offer layers that need peeling back. We’ve seen peripheral characters become more integral to the story and we’ve discovered that even the baddies who stop by for an episode or two offer some interesting perspective in what has essentially become a parasite Kinj pandemic. 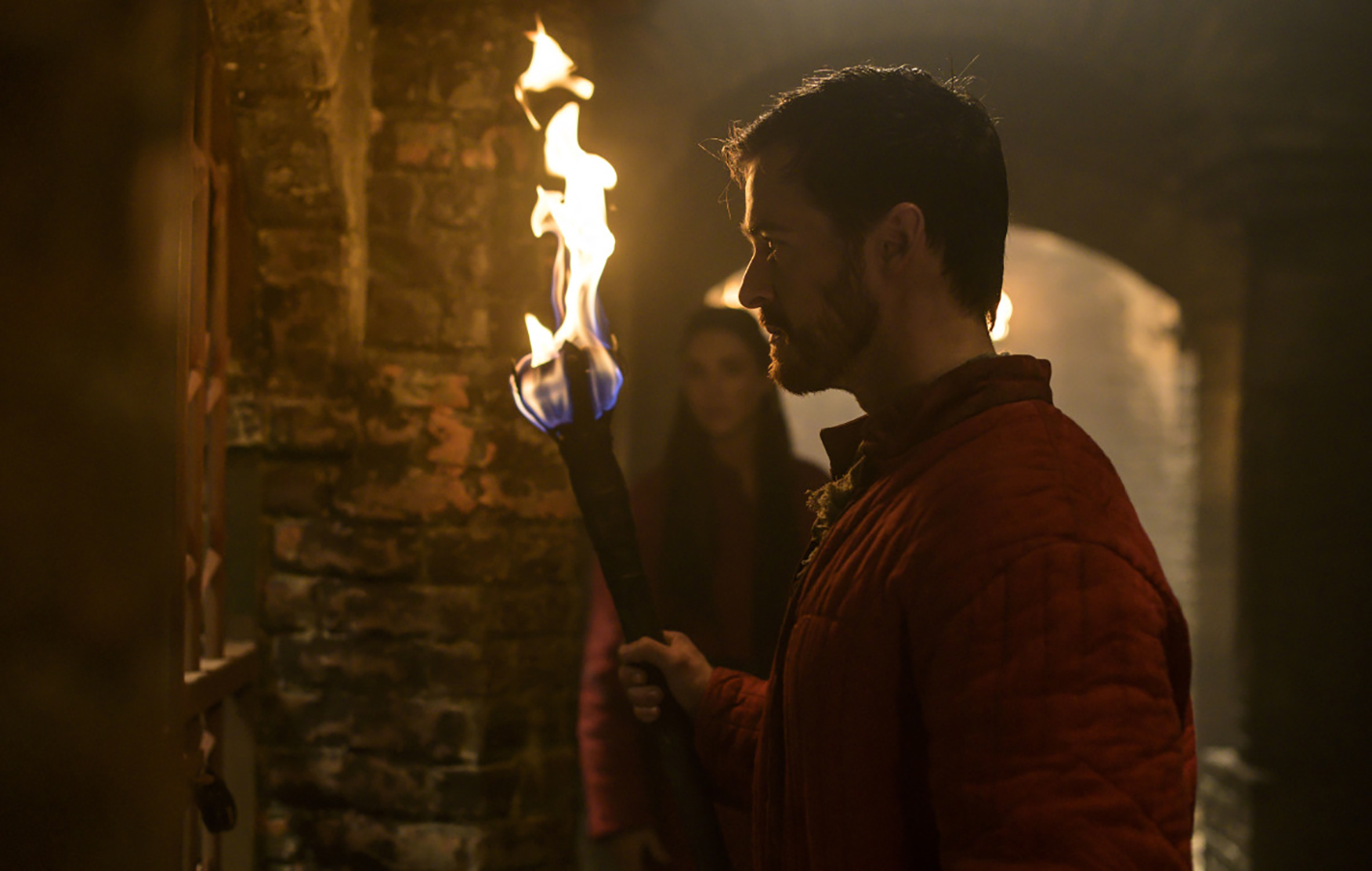 There’s an interesting little parallel with what we are experiencing here in the Covid-19 age of 2020, which I don’t think is an accident. I suspect the writers have incorporated that kind of element into the story to give it some present day dynamic that we can understand. At least that’s kind of how I am perceiving the parasite Kinj threat. I could be completely off the tracks on that, but that’s my take. I’m also interested to see when and how Garret gets to exercise some of his pent-up frustration. Here’s a guy that needs some healing of the soul.

Again, a fun little twist on a story that could be easily phoned in with typical fantasy adventure tropes. But while there are those kinds of tropes within The Outpost, they are not gratuitous and they certainly don’t hinder this show from moving in unexpected directions. Season 3A is shaping up to be something kind of special. Now, with everyone back together, the race to end the parasite Kinj threat kicks into high gear. Oh, don’t forget to keep an eye on Falista. I wonder if No. 2 is going to do some recruiting?