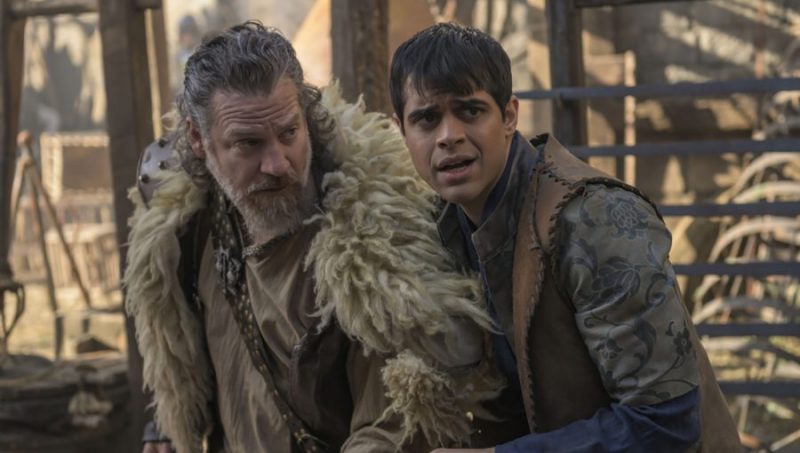 While I understand there were some interesting individual storylines in Episode 306 of The Outpost, I have to say that, for me, “Kill the Rat, Kill the Kinj” boiled down to a simple, unpleasant reality – many of our heroes were struggling with some emotional turmoil as Yavalla seems to be making a successful run through the countryside. The game is afoot, but our crew at The Outpost don’t seem to be in very good shape to chase or defeat their quarry. And I think they know it.

I don’t know about you, but I found this episode somewhat different in tone. Throughout the episode, we were treated to the stresses and strains of not only trying to get a grasp on Yavalla’s plans, but also some inner demons that seem to be rising to the fore for Zed, Garret, Talon and the rest. Doubt is creeping in and we got a good look at each character dealing with it. That’s a dangerous road to travel when faced with an ever-expanding foe.

Talon is struggling with being a reluctant leader, Zed is struggling with the dream for his people being a lie, Wren and Janzo are struggling under the weight of expectations to find a cure for the kinj infection, Garret is struggling with his killing of Wythers and the aftereffects of his time with Sana and The Three, and even Munt sees the ugly tension of emotional worry as he suddenly finds himself with some female attention, attention that almost went as quickly as it came.

Yup, our crew certainly were working through some interesting feelings in this one and I enjoyed the journey more than I thought I would. It was a trip worth taking with each of them. But what I really liked was it was all completely plausible. Given that situation with that same kind of history – it all made perfect sense to me that they would have those diverse worries and doubts. I liked that a lot. It’s one of those reality-based moments that this show, fantasy-adventure as it might be, delivers to draw us in. 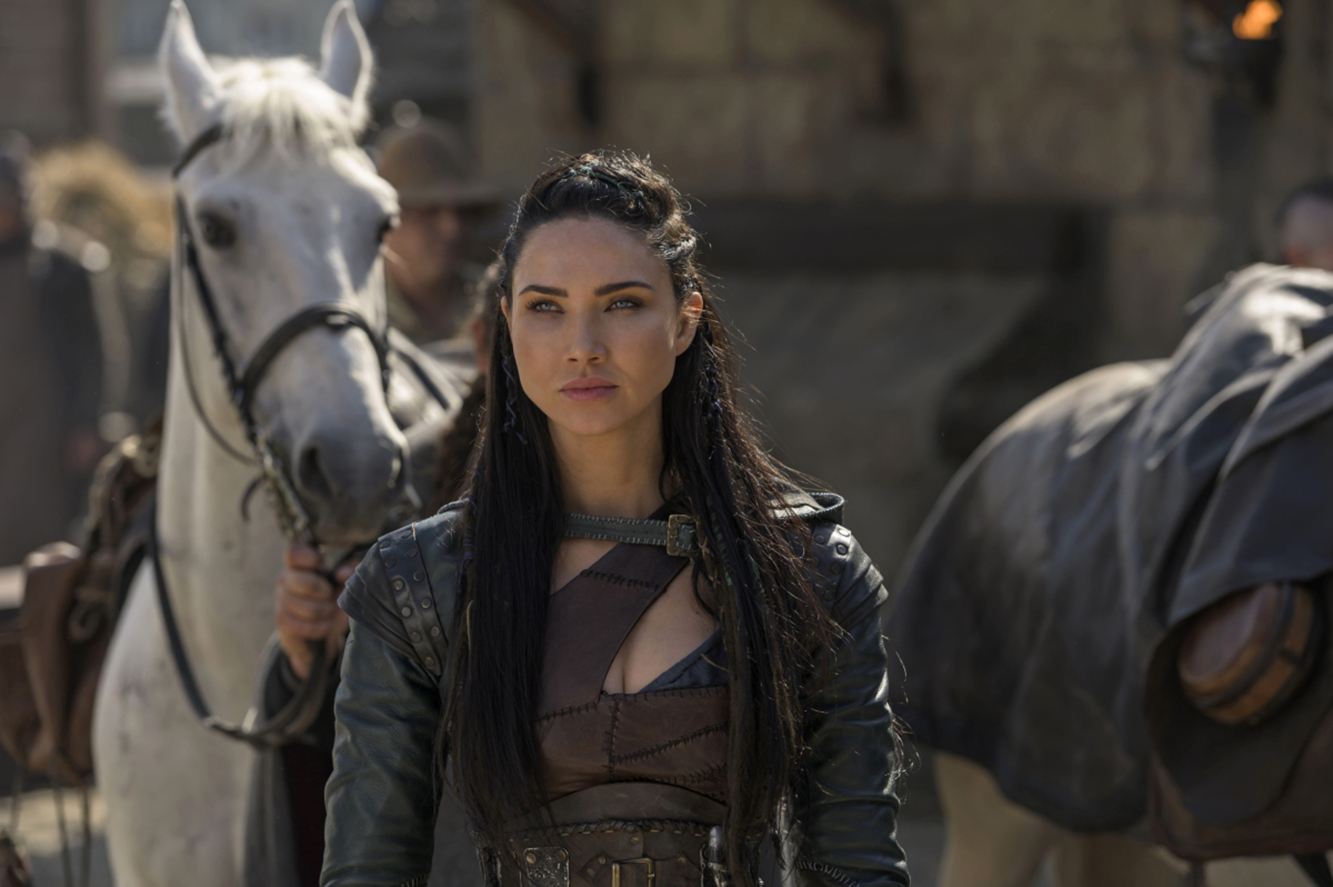 It must be springtime in the realm, because the boys and girls are pairing off in an impressive way at The Outpost, an activity that it looks like even Munt is going to get some run with. Walita, the queen’s handmaiden, is out of work and turns up at the Night Shade with what can only be described as a discerning eye toward our man-child, Munt. Naturally, he takes a while to grasp what’s in the wind, but hires her on to work at the Night Shade and makes the ultimate romantic gesture — takes her rat hunting.

Warlita is central to the whole Lu-Qiri cult and human sacrifice thing as Garret is tasked with solving the riddle of the Lu-Qiri cult that’s sprung up. Warlita is kidnapped by the group and readied to be the next sacrifice. Turns out, there’s a loose Lu-Qiri running around, Yobhan’s Lu-Qiri, which is now being sated with human blood. The ghost of Yobhan is still causing issues at The Outpost, a development that made me smile just a tad. In Garret’s new job of investigation, he’s reminded of his part in his father’s death, as well as how he lacks his father’s investigative skills. And it clearly weighs on him.

It’s clear Garret still struggles with all he’s been exposed to and we see some nice angst going on with our guy. I keep wondering what Garret will do if and when he’s exposed to The Three again. Feels like it will be juicy fun. As an aside, this cult storyline may have seemed random, but I like it because it seemed random. It gave Garret a chance to get involved in a project, if you will. A chance to stretch himself mentally and perhaps prove a little something to himself about his capabilities. For me, it was a fun little tangent that played into the larger story, but stood on its own, too. Well done. 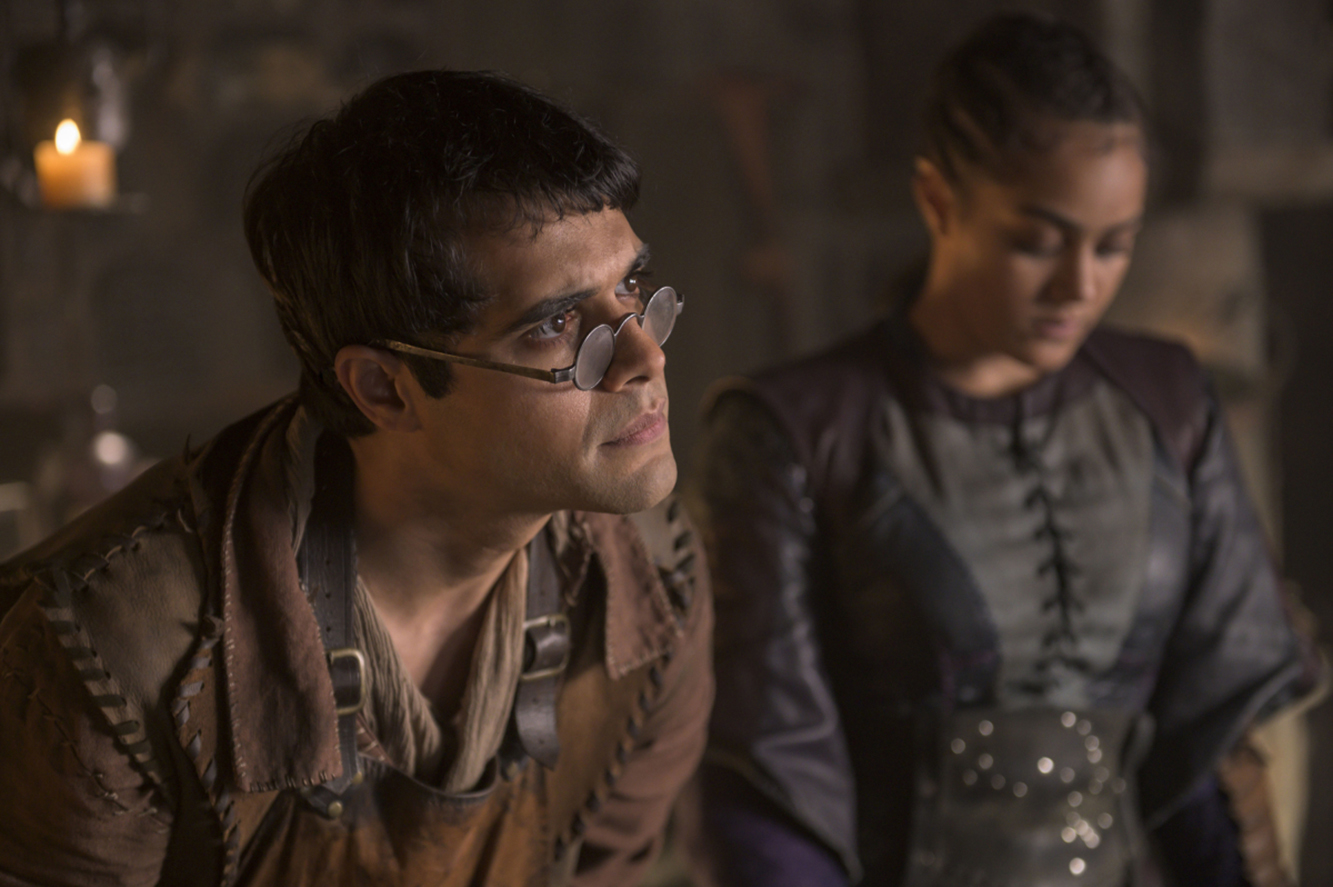 Now, of course he pulls it together and we get a fun team-up of Garret and Munt, who is about “this close” to losing his normal restraint. You never know how closely you’ll bond over rat catching, but Munt has taken a shine to Warlita, a feeling he likely hasn’t had to deal with much in his life. He and Garret follow clues and get close to the group. Fortunately, Talon has been pursuing another angle, the Lu-Qiri, who by rights is now attached to her. Trouble is, this Lu-Qiri was not treated well by Yobhan (go figure) and we get a lesson on what a little kindness will do. Talon for the emotional win…yes!!

In the end, our heroes converge on the scoundrels, thwarting the attempt to make Warlita a four-course meal for the Lu-Qiri, and perhaps cementing a touch of positivity into the minds of some of our folks. And they needed it as the volume of uncertainty and doubt that was pouring out during this episode was pretty impressive. Interestingly, now Talon has a Lu-Qiri, a formidable one by the looks of her. I wonder what part this new pairing may play down the road?

I have to compliment Jessica Green, Adam Johnson, Jake Stormoen, Anand Desai-Barochia, Izuka Hoyle, and Reece Ritchie for doing such a good job of portraying good people faced with impossible odds and doubting the roles they now find themselves in. We don’t see these kinds of episode that often, episodes where the weight of expectation and their own possible shortcomings, are so demonstrably portrayed – particularly by a large group of main players. There was emotional turmoil all over the joint, but as happens with this show, the people get up, dust off their well-fitted leather pants, and move forward. 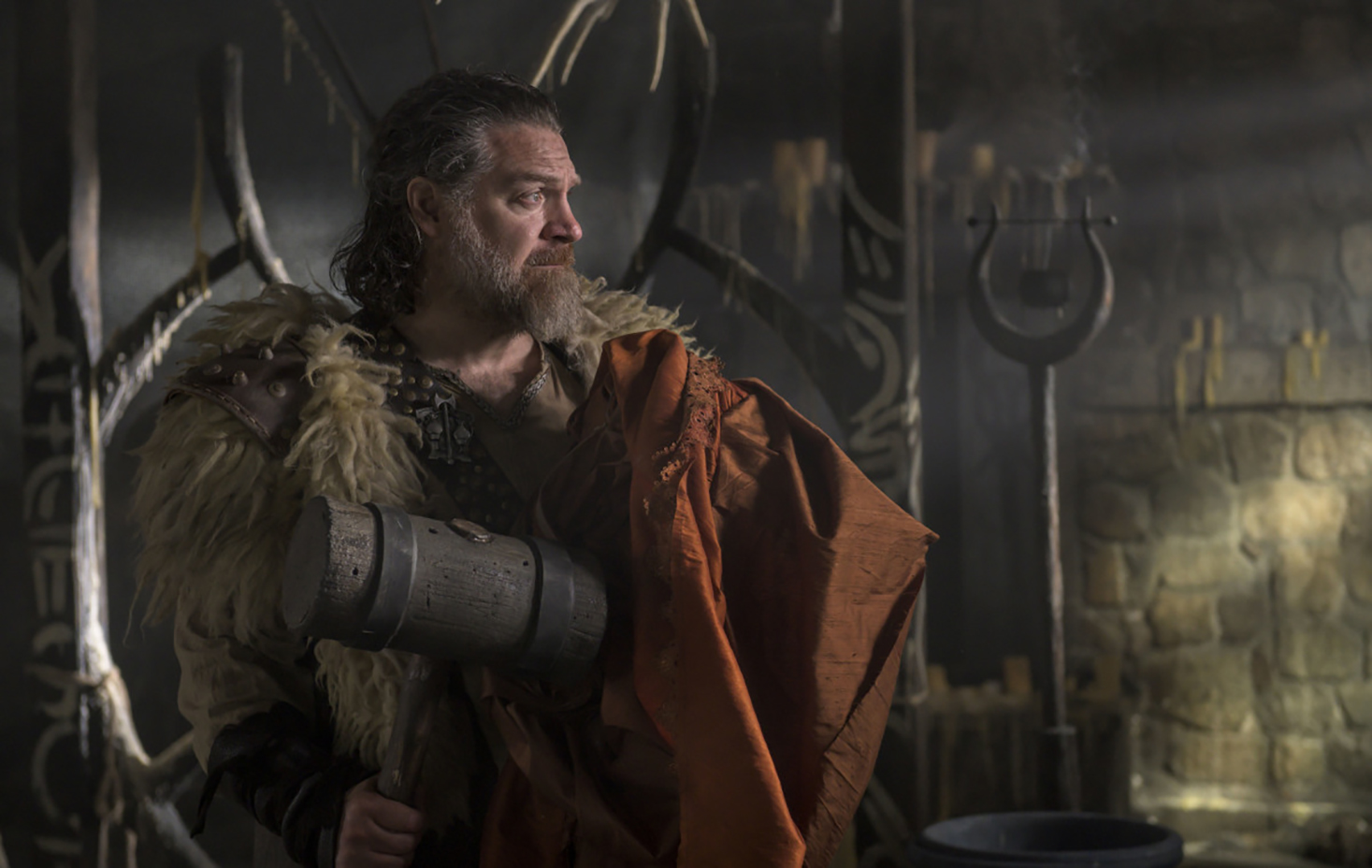 Even as Janzo and Wren make some progress with the Kinj and create a kind of kinj infection detector, the demands made on their considerable corporate intelligence never lessens – only increases. Yet, in the midst of all that, they continue to press on, studying, questioning, and delivering the occasional smooch to let Yavalla know she isn’t forgotten. It’s great to see how much everyone rely on Janzo and Wren, but that doesn’t come without pressures of its own – not the least of which is the pressure they no doubt place on themselves.

Even Zed was in a delightfully mopey mood through most of this episode, prompting even Talon to ask if he was done whining. Zed’s issue is a little different – all he thought he knew was a lie. He even admits to Talon that if she wanted to bring the other blackbloods through the portal, he wouldn’t let her. They are better off where they are, he tells her. Wow, talk about an about-face. Let’s face it, Zed is no longer a man with a vision, he’s now a man in search of a vision, having watched his dream crumble around him. Zed may be the most emotionally hard-hit in the last few episodes.

Of course he perked up when he and Talon wandered into the woods after the Lu-Qiri, reminiscing again of their last forest foray, one that included a passionate roll in the leaves – then almost getting crushed by a greyskin. But that’s taking the romance out of it. I don’t think it a secret that Zed has feelings for Talon, feelings he’s demonstrated throughout season 3 as he bucked Yobhan at many a turn. He cares for her and cares how she perceives him, leading him to make some decisions that were slanted in her favor. I don’t know if Zed thought the fresh forest air would rekindle the sparks, but Talon assures him that’s done with, though I’m not convinced he thinks it is. Perhaps Zed is the ultimate “so, you’re saying there’s a chance” optimist? 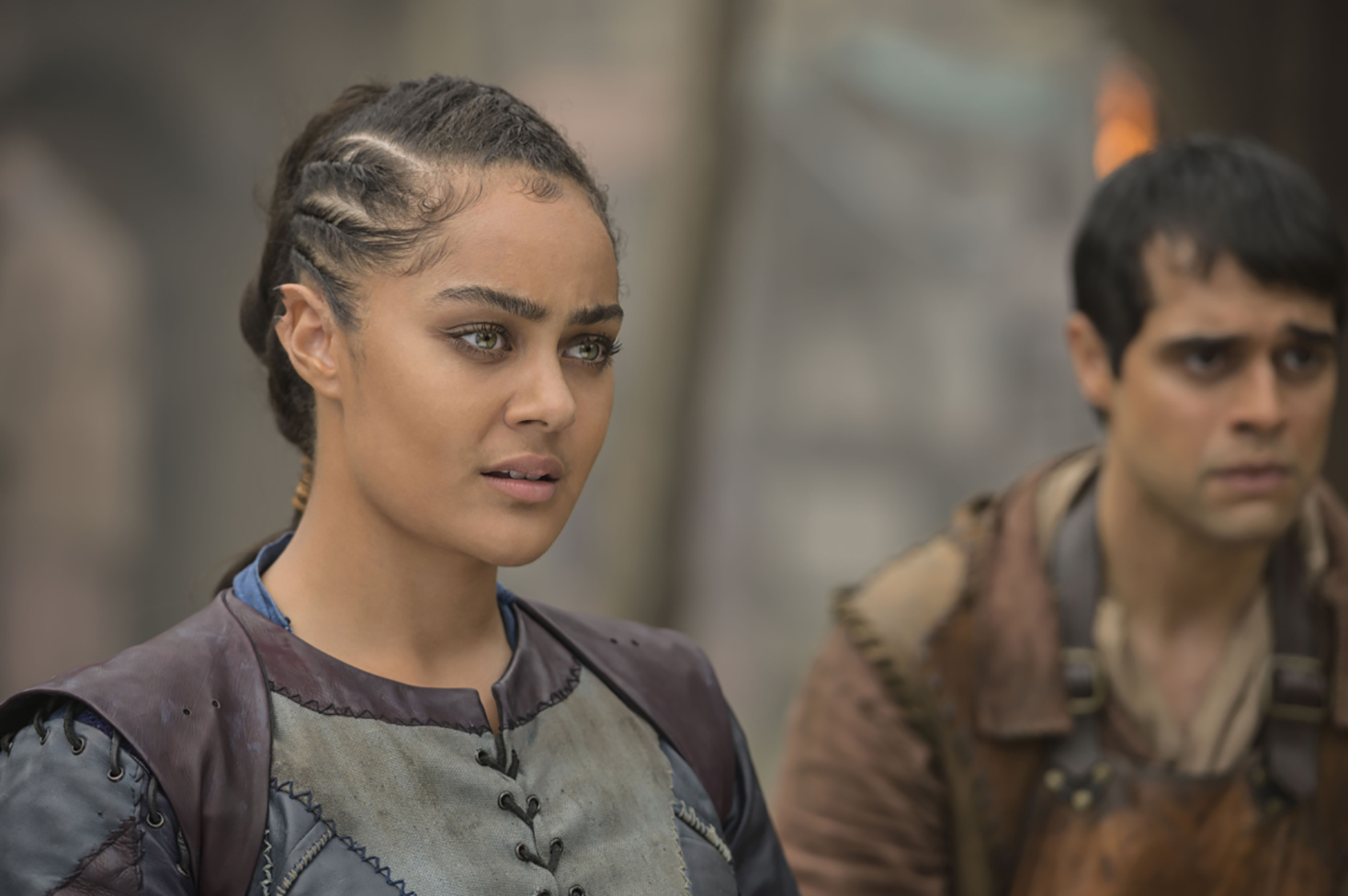 And on it went, all of our heroes dealing with their own emotional struggles in a variety of ways. I found this episode to be kind of different in that way and I liked it. It lent a legitimate air of desperation to an unspoken recognition that Yavalla and her kinj army may already be beyond them. They don’t want to slaughter people who are infected, but so far they’ve found no other way to mitigate the kinj.

Seems like Zed’s okay with doling out some hacking and cutting, but you can see that Talon wants to find a better, less bloody solution. And for that, she knows that it will likely come from the minds of “Wrenzo.” The Yavalla issue likely won’t be fixed by sword and steel, but by intelligence and imagination. That’s Janzo and Wren.

But the bigger issue, the one that was helping push the stress button amongst our heroes, was the discovery that Yavalla’s campaign of infection was well underway in the countryside. And, as we saw in the final scenes, it had reached the doors of the Capital itself. Prime Order troops are now infected, so it seems that the whole city will be part of The United sooner rather than later. That’s a lot of unpleasantness to have to come to grips with and it was clear that Talon, Zed and Garret each had some thoughts on that – thoughts that maybe weren’t in line with each other. There’s those doubts again.

On another note, nice to see Munt getting a bit of a love interest. I must say, when Warlita shows up at the top of the stairs in one of the Mistresses dresses, I think it made an impression on everyone. She was kind of rocking that outfit, so it will be fun to see what part she will play within all of this moving forward. We’ve also got a Prime Order captain about to show up at The Outpost and he’s described as “a brute,” so that will be fun to see how much trouble he causes – and how he even gets in.

Lot of plot irons in the fire right now, so I’m looking forward to the second half of season 3A and where it may end up. Seems hopeless on many levels right now, but I’ll stay optimistic and look for “Wrenzo” to deliver yet another miracle of science and medicine.