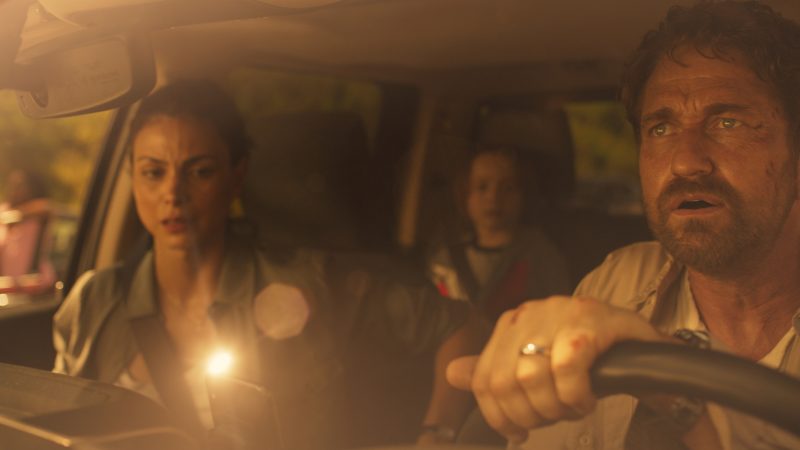 It wouldn’t be 2020 without a disaster movie. Every year there is a theme be it an alien invasion, mother nature, or space that causes the end of the world. In 2020, that movie is Greenland. The film stars Gerard Butler, Morena Baccarin, David Denman, Hope Davis, Holt McCallany, and Scott Glenn. The film has been delayed a few times for its theatrical release which has left some to speculate how much of it was COVID related versus the quality of the film. Check out our thoughts on the new disaster movie and its’ similarities to another disaster film from the late 90s.

A family fights for survival as a planet-killing comet races towards Earth. John Garrity (Gerard Butler), his estranged wife Allison (Morena Baccarin), and young son Nathan make a perilous journey to their only hope for sanctuary. Amid terrifying news accounts of cities around the world being leveled by the comet’s fragments, the Garrity’s experience the best and worst in humanity while they battle the increasing panic and lawlessness surrounding them. As the countdown to the global apocalypse approaches zero, their incredible trek culminates in a desperate and last-minute flight to a possible safe haven.

Many of the common disaster movie tropes are used in Greenland. It starts with a modern twist on the lottery process for who is taken to shelter. The film uses the new age of connected devices and technology to alert those who are invited to shelters away from the disaster. But nothing is ever that simple. It turns out getting there isn’t going to be that easy because his son requires insulin and they are not accepting anyone with medication needs.  For the rest of the film, John (Butler) and his family are separated as he fights to get the medication his son needs to survive.

Greenland’s formula is nothing new. The film doesn’t spend a ton of time on science but does make a point to compare asteroids to comets. In the case of this disaster, it’s a comet, not an asteroid that is going to hit. Comets, which are made up mostly of hot gasses, are faster and less predictable than astroids thus how the film lays out the unprepared military for this disaster. Where the film spends most of its time is in the fall of society and how everyone is fighting to survive.

The few scenes that we get of the actual disaster happening are less dramatic than its 90s disaster movie counterpart, Deep Impact. In that film, you had a far more emotional response to the people who were handling not getting selected. Greenland lacked the same emotional impact that you saw with Deep Impact. You never really get invested in anyone. When it came to how humanity would fight back against the comet Greenland decided that it would stick with its story about the world be unprepared. There was no miracle shuttle with nukes to save the day, like in Deep Impact. In that respect, the story came across as a bit more believable.

All in all, Greenland has enough meat to stand on its own but not to stand out among disaster movies. It has a unique enough approach to the science to help it be interesting but lacks the emotional attachment to the characters that makes it memorable. Still, it’s a disaster movie. The kind of thing you can enjoy at home with video on demand and kick back and watch as Gerard Butler doesn’t save the day, but tries to save his family instead. It will take your mind off of everything else and let you visualize the world getting destroyed (even if for your own personal amusement).