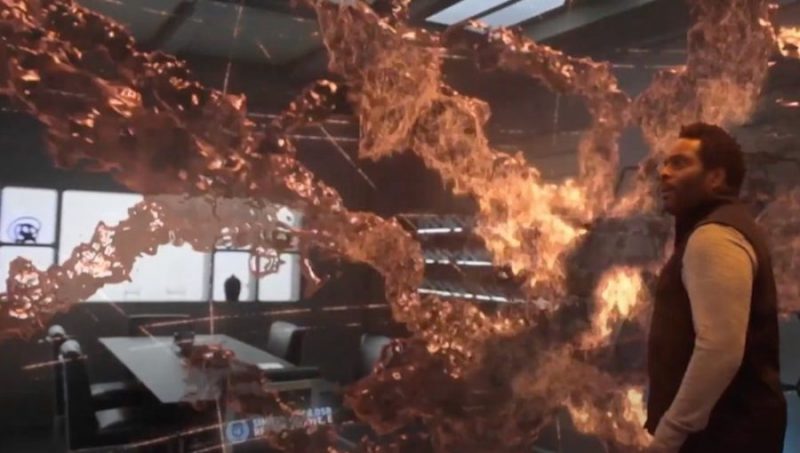 The Expanse has always been an involved, somewhat dark series, one that probes not only the human condition, but the potential for humans in a much much larger context. It’s a show that hurts you and stretches your emotions as it provides a stark reminder that, even in space, the traits that make us less than we should be are there, looking for an opportunity to step out of the shadows and show us our ugly sides.

Fortunately, the crew of the Rocinante have, even in their flawed ways, been that beacon of light that tried to do the right thing even when there appeared to be no right thing to do. Those traits are as evident as ever as season 5 begins with the first three episodes of The Expanse dropping a little earlier than expected. While the Tuesday evening surprise was a terrific revelation, diving back into the series provided a reminder of just how layered and delightfully complex this show it. There’s really nothing like it in the sci-fi realm – it’s a show that holds its own unique place within the niche. 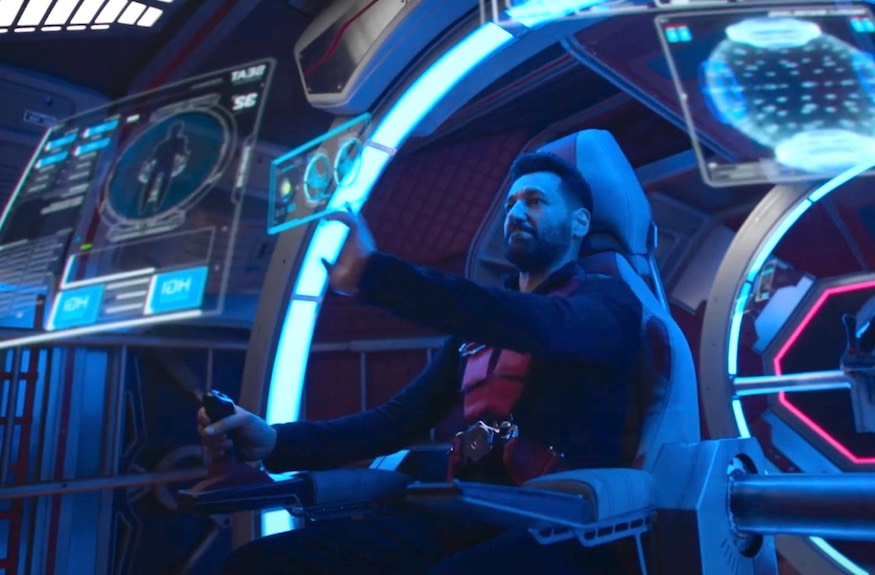 Alex Kamal (Cas Anvar) in season 5 of The Expanse on Amazon Prime.

Often, by season 5 – if a show gets that far – you start to see signs of show fatigue. The sharpness kind of dulls and the things that used to captivate you seem to have drifted away. I don’t think that’s a worry with The Expanse. Season 5 looks to be nicely in the groove, folks. This show not only gets bigger and better, but it continues to refresh the boldness that it has had since it’s inception. Three episodes in and all that we love about this show is still there, still evolving, and still wonderfully smart and creative.

But like all smart and creative shows, it throws you curveballs that take the viewer down different avenues. The show has always been about the corporate value of James Holden, Naomi Nagata, Amos Burton and Alex Kamal as they work through difficulties. It’s family and the struggles family goes through. Season 5, however, opens with our quartet going their own ways for a variety of reasons. Holden and Nagata are in port overseeing the refit of the Rocinante, but that doesn’t last long as Fred Johnson provides information about where Naomi’s son, Filip, is. And with that, she’s off to come face to face with a hurt she’s been carrying around a long time.

Amos travels to Baltimore and a chance to honor the memory of the woman that saved him, or more precisely, showed him how to save himself from the hardscrabble life on the streets. It’s here we learn a little more about Amos and his youth, as well as the influence this woman’s kindness and toughness had in shaping him – and why he eventually left. The beauty of the Amos arc is that we get some vintage Amos along the way – dealing with some Belters trying to extort money from passengers on a ship, easily handling a street hustler who is working for the man he wants to see – it’s just fun to see that directness that Amos possesses. He sees no reason to wait for conflict to arrive when it’s clear conflict is inevitable. To him, dealing with the immediacy makes the most sense. 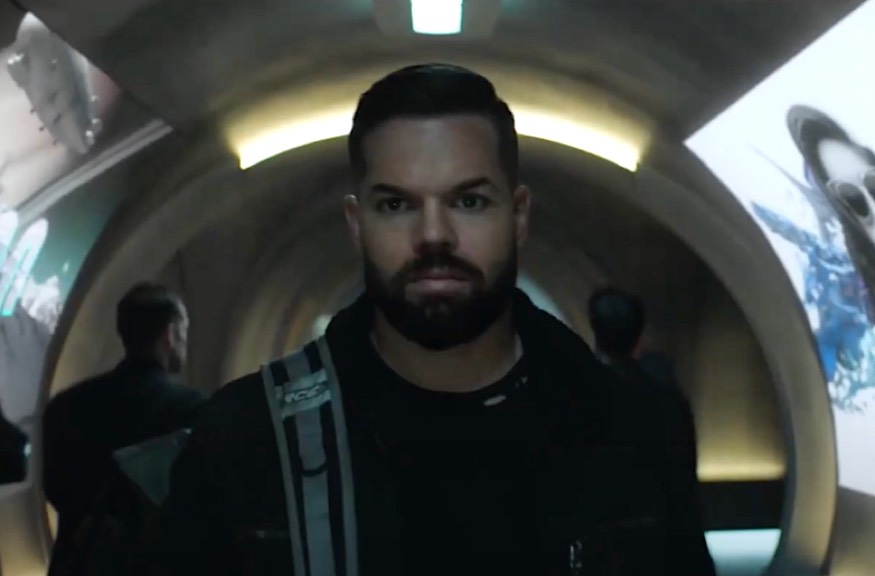 Amos Burton (Wes Chatham) in season 5 of The Expanse on Amazon Prime.

It’s a wonderfully refreshing feel to about as unique a character as there is on the landscape. Wes Chatham really pulls the Amos vibe off and, although there’s almost a childlike directness to him, the absolute embracing of violence when it’s needed troubles him not a bit. It’s a devastating character and one of my favorites.

And did you notice that the backpack he was carrying around to obviously was the one Murtry had when they were on the other side of the ring. That fight is still one of my favorite moments of inevitability. So, it would seem that Amos took a little trophy from their final encounter. As for Murtry? I don’t think he’s walking around.

We also learn that the big guy running all the illegal activities in Baltimore is actually Amos’ brother. That’s right, Erich, the man behind the curtain in Baltimore’s underworld, is the brother. And although he has some physical disabilities, it’s clear he’s a formidable guy with plenty of muscle to get things done. The two’s meeting is both interesting and instructive as they offer a look at their youth and we learn that Amos is supposed to be dead, killed by his brother to allow him to escape. What an interesting development and one that leaves us wondering just what kind of ‘hood’ Amos was. There’s a stark reality between the two, and a very real danger should Amos return to Earth, but you got the very real impression that there was affection there. 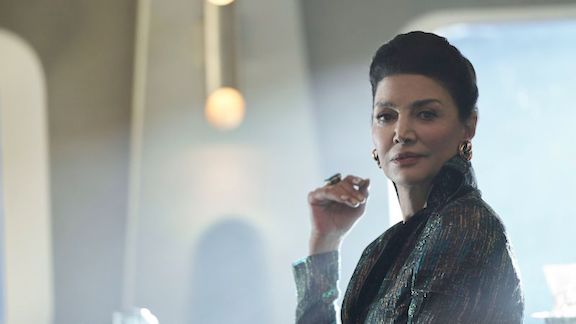 Krisjen Avasarala (Shohreh Agadashloo) on season 5 of The Expanse on Amazon Prime.

Amos is off to Earth, Naomi is looking for her son, Alex heads to Mars to see if he can find some sort of reconciliation with his wife and child. Interesting that he’s in contact with his son via video, but his wife is having none of it. She is in no mood to reconcile or assuage Alex’s guilt or need for forgiveness. There’s a little bit of delusion for Alex as he thinks time will smooth things over, but you don’t get that feeling. Fortunately, to pass the time he bumps into Bobbie who is working for Avasarala in trying to nail down the sale of black market Martian military supplies to The Belt. Always so good to see Bobbie, particularly when she gets a moment to save Alex and kick some ass in the process.

Naomi has a bit of a delusion as well, perhaps a mother’s delusion that she can talk some sense into her son, but that turns out to be ill-advised. Not only is her son resolute in his disdain for him mother, but when he finds out she has purchased a ship for him to do with as he wishes, he decides to take the offer, take the ship, and take his mother in the process. It seems as though it won’t be long before Naomi and Marcos Inaros come face-to-face once more. That will be interesting as heck, right?

While all that’s developing in the first three episodes, two very real and interesting threats are coming into focus. The secret of Fred Johnson having some of the protomolecule has gotten out and there is a group that seems to want to steal it. Holden, of course, is on the fringe of losing it as he discovers Fred and his cohorts are doing scientific experiments with it. And as a guy who has had to deal with the nightmare that the protomolecule can cause, he’s beside himself with fear and angst. It’s interesting to me that it’s hard for people outside the Rocinante’s sphere to understand the danger with the protomolecule. I suppose it’s the old chestnut that even though it did this, we won’t let it get to that point. We can control it. Everyone thinks they can control it, right? 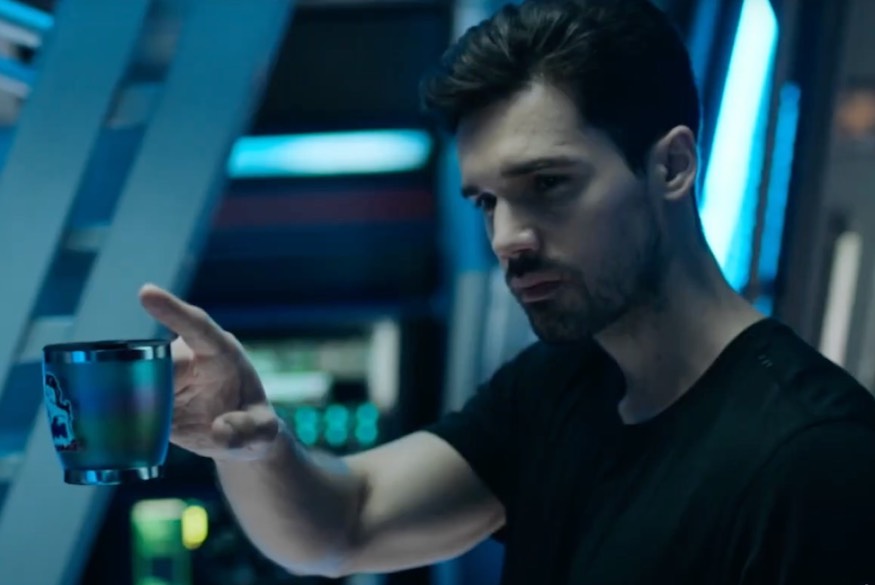 Jim Holden ( Steven Strait) on season 5 of The Expanse on Amazon Prime.

There seems to be plenty of unrest and even dissension within the Belter ranks. Marcos’ stealth meteor attack sees the first salvo land on Earth as the third episode concludes. Avasarala and her trusted military liaison have sussed out the threat, but her bridges, both fore and aft, have been burned. Chairman Gao isn’t really interested in her former rival’s thoughts or theories, preferring instead to focus on the new opportunities beyond the ring. Unfortunately, she’s going to have to come to grips with what’s about to happen as more space rocks are on the way.

One of the things I particularly like about The Expanse is that while it conveys a darkness and a dread a healthy amount of time, it also presents these wonderful puzzles within the story that have to be examined and put in place. And sometimes the pieces don’t fit neatly and have to be forced into their proper space, which often takes a toll on the people involved with the story. I don’t think there’s any question that our four heroes have paid a price for their pursuits over the first four seasons.

When this episode opens, there’s a sense that, at last, they get some down time to recharge batteries that have been drained and then drained again. And yet, the machinations of the realm they inhabit keep pulling them back in. It’s like a Godfather moment – just when they seem to be out, they get pulled back in. But it’s not far-fetched as they have a unique skill set and knowledge of many of these situations because they’ve been right in the middle of them from the start. Their knowledge, their experience, is now their curse. 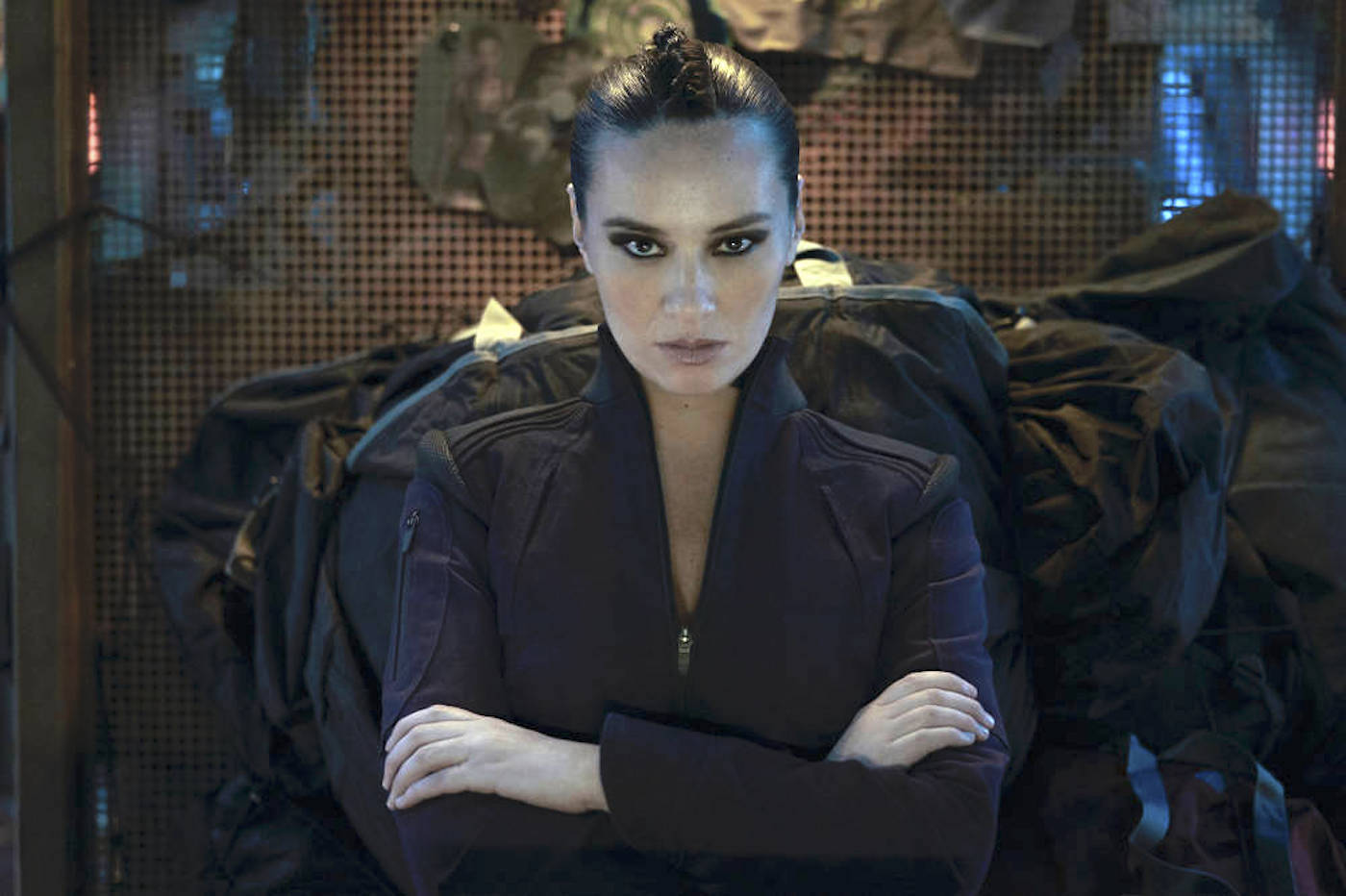 Camina Drummer (Cara Gee) on season 5 of The Expanse on Amazon Prime.

There’s another favorite character that’s gotten away. Fan favorite Camina Drummer is now running a two-ship pirate salvage operation, but with an eye to discovering where Inaros might be. Eventually, she runs across the ship of Klaes Ashford and knows for certain that he’s dead. It’s an interesting moment because we see it flip a switch that points to vengeance. She couches it in terms of the bounty of Inaros’ head ($20 million), but deep inside, she wants to kill this guy – bad.

But a funny thing happens on the way to the reckoning, one of her crew members breaks through the wall and the anguish Drummer feels comes flooding out. The hardness is softened, the anger is mitigated, the desire for blood drifts away as she cries in the arms of her crew mate. It’s an interesting moment as Drummer isn’t emotional in the best of times, and tends to skew toward a brooding intensity that is, in itself, somewhat intimidating. 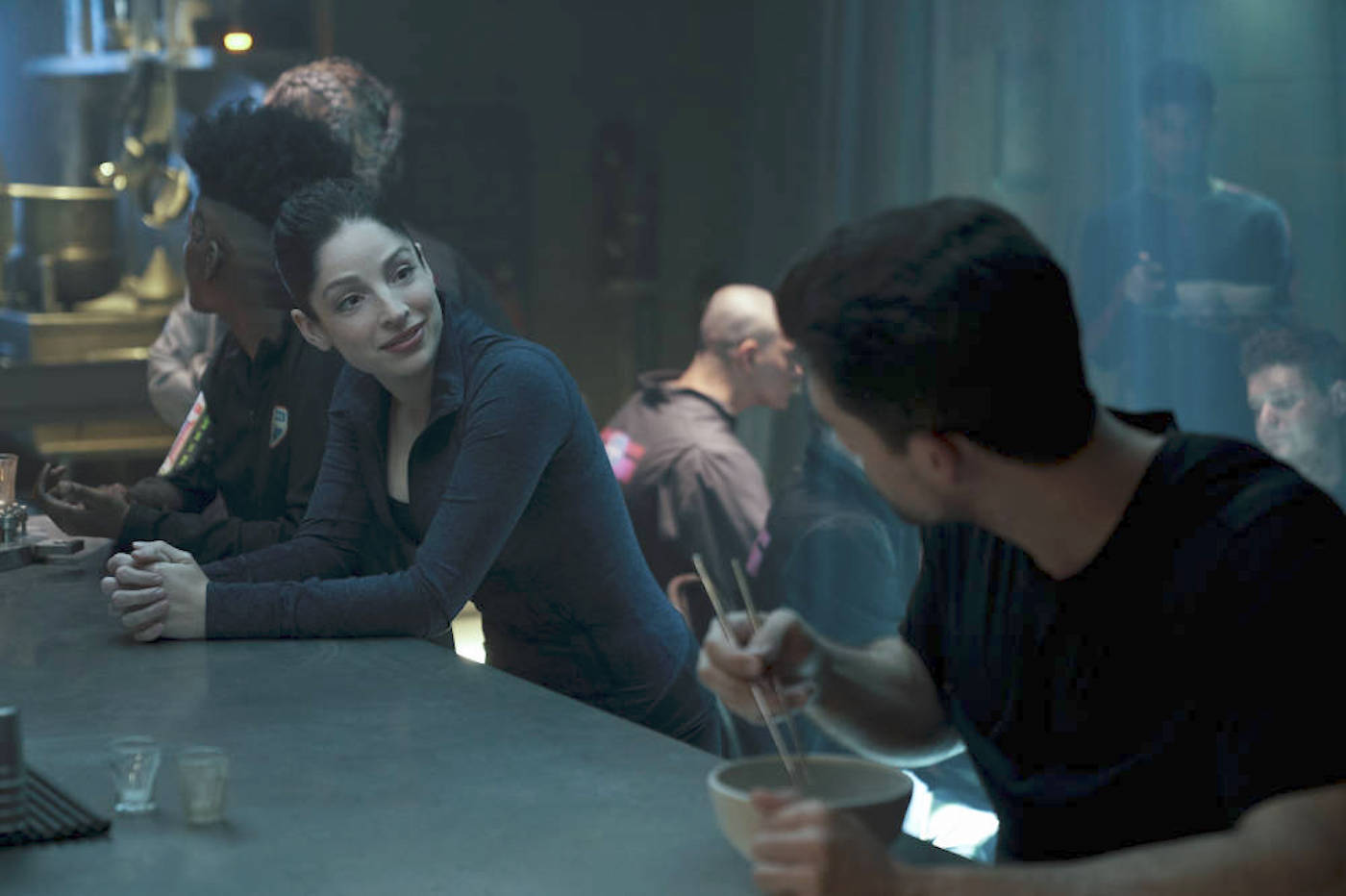 Season 5 of The Expanse on Amazon Prime is now available.

There’s an intensity that nestles up against a cynical fatigue. She’s another one who has seen and experienced too much and the path toward total cynicism and coldness is just a short leap away. Fortunately, it appears she won’t make that leap for a while.

Obviously, there’s a far too much to try and jam into a review that covers three episodes. But within those episodes rests the DNA of The Expanse that make this show so formidable. There’s a hard edge to much of what we have to process, but it’s not so hard that you start to feel disdain for it. It pulls you in and creates an investment in not only the characters, but the various storylines that are in play. Three episodes in, we see a lot of threads floating in the wind, but inevitably, a good number of those threads will likely come together to form another season tapestry that’s rich, deep and vibrant. I need more episodes now.