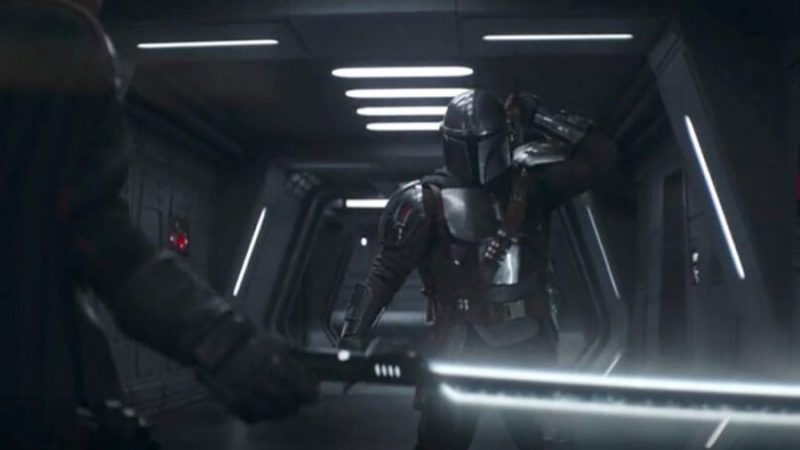 The Mandalorian: A Season Finale With Plenty To Revel In – Review, Ep. 208

Wow, that was quite the season finale for season 2 of The Mandalorian, wasn’t it? Not the slam-bang massive cliff-hanger tension-filled season-ender, but the kind of finale that tugs at the heartstrings a bit while also offering a surprising bit of fan service and closure. Yes, Chapter 16 of The Mandalorian, “The Rescue,” offered a bit of a mind-blowing reveal at the end, but also seemed to close the book on the Grogu-Mando saga and, perhaps, offer a little peak into what season 3 might offer.

But that finish was epic, wasn’t it?. Our heroes, trapped aboard the bridge of an Imperial Remnant ship, Moff Gideon in shackles, advanced droids banging away at the blast doors, Grogu looking frightened, when what should appear but a lone X-wing fighter. And out of that fighter jumps a lone Jedi, green lightsaber in hand, to lay waste to the droids sprinkled throughout the ship. Grogu seems to sense something about this cloaked individual and when he’s through the doors and the last droids lay smoldering on the ground, it’s none other than Luke Skywalker himself. Yes, that was exceptionally awesome to see Mark Hamill, albeit de-aged quite a bit thanks to the genius of computers, standing there with lightsaber in hand. Stunning! Exhilirating! Most assuredly shocking! 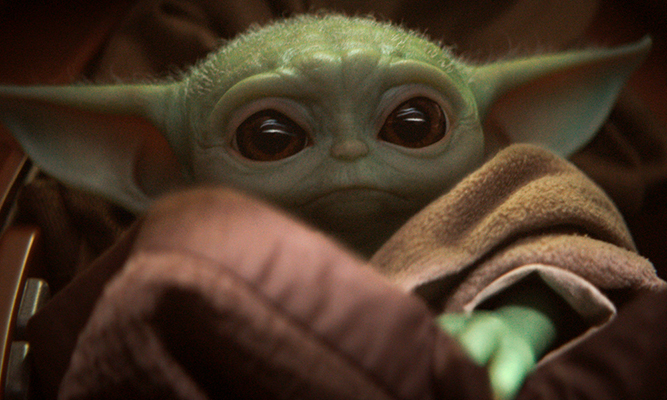 Grogu will now train under the tutelage of Luke Skywalker. The Mandalorian on Disney+

It turns out he’d been the Jedi to feel Grogu’s force call two episodes ago on the “seeing stone” and he who responded to the call to track the little green guy down. You know, fan service in these kinds of franchises are a tricky thing and I have to give full kudos to Jon Favreau, Dave Filoni, Kathleen Kennedy and their team for an amazing job of filtering enough Easter eggs and fan service moments into the episodes to get everyone with a Star Wars penchant tickled with delight. But not doing it in a gratuitous way. It’s a tightrope to walk and I think season two has been a master class in walking that rope delicately and effectively.

Seeing Luke Skywalker stroll through the doors, then moments later R2-D2 rolling into the room, was a massive moment. It pays homage to the entire franchise and still ties The Mandalorian effectively to the whole, as well as the timeline it’s working in. Masterful and exciting as hell, I can tell you. I re-watched the scene 3 times just to soak it all in. The truth is, I found a barrel-full of things in this episode that brought a smile to my face. Seeing a younger Luke and R2-D2 emerge as the hands that Din Djarin would place Grogu into was just the cherry on top of not only a delightful (and somewhat mind-blowing) episode, but a season that’s been a joy to watch week to week.

Season 2 of The Mandalorian was a joyful and interesting run to this point, and I enjoyed the hell out of it. It was well-written, well-acted, and well-conceived in a way that brought us to a conclusion that was both satisfying and bittersweet. But…having said that, it appears the Grogu storyline is completed, which frees our Mandalorian up for further adventures. My guess is that Din and Bo-Katan will have some issues to hash out fairly quickly. Will Mando join the battle to reclaim Mandalore? Bo-Katan laid out the invitation, didn’t she? But there’s the darksaber issue they’ll need to overcome. Should be interesting. 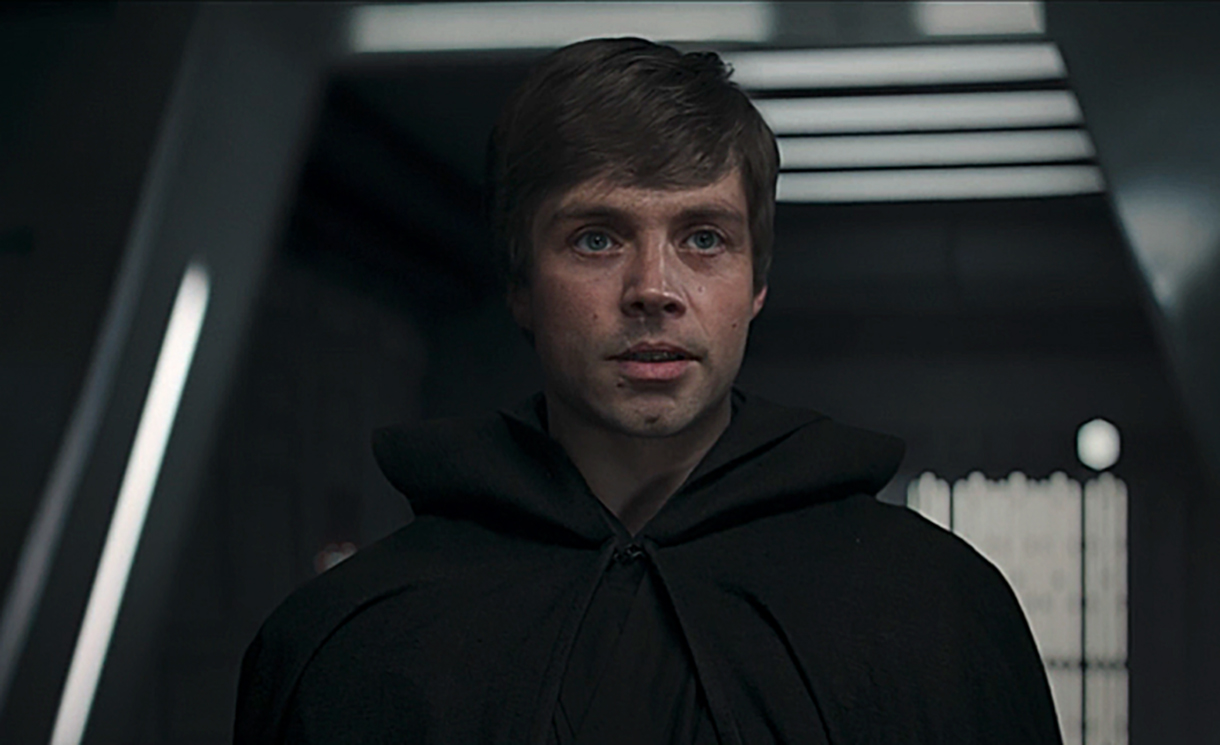 A youthful looking Luke Skywalker saves the day and will train Grogun in the ways of the Jedi. The Mandalorian on Disney+

The premise of this episode is wonderfully simple, recruit Bo-Katan and her companion Koska Reeves to join the assault of Moff Gideon’s ship. In doing so, Din recovers Grogu and Bo-Katan gets Gideon and the darksaber, the instrument through which she can lay claim to the Mandalore throne and begin the process of rebuilding that world. There’s a herd of soldiers to wade through and those dark troopers who are now fully automated drones. Oh, and our mismatched cadre of heroes have gotten their hands on Dr. Pershing as well, so there’s an interesting chip that could prove useful in deciphering the Empire Remnant’s plans, etc.

Boba Fett creates a diversion, then once on the ship, Mando goes in search of Grogu and we have a great arc for Bo-Katan, Cara Dune, Koska Reeves and Fennec Shand who roll through the ship like a thunderous surf dispensing death and destruction with every step. This is a fairly important little arc, given how infrequently we see a group of women, a group of warrior women of different stripes, on their own fighting a life-and-death battle that they win. Each of the ladies in this group have their own moments to show out and there’s something wonderfully empowering in viewing the ladies take center stage in the battle arena and simply kick ass up one hallway and down the other.

I offer thanks to Gina Carano, Katee Sackoff, Ming-Na Wen, and Sasha Banks for their respective portrayals of these characters and the very important reminder that warriors and the ‘band of brothers’ mentality isn’t just a male thing. I truly enjoy seeing the ladies out front in the battle aboard ship. It was inspiring and it was so satisfying. 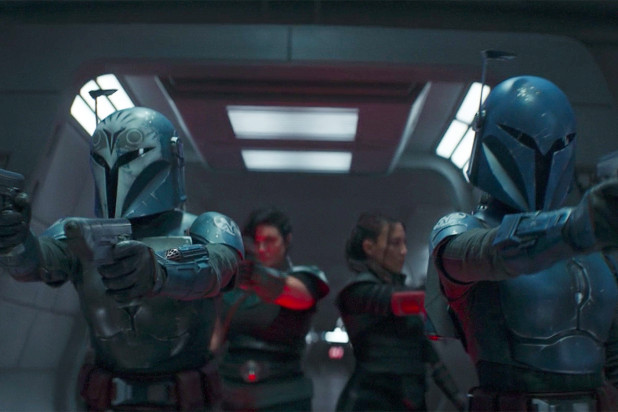 The female quartet of Bo-Katan, Koska Reeves, Cara Dune and Fennec Shand board the Imperial Remnant ship. The Mandalorian on Disney+

The ladies fight their way to the bridge, but no Moff Gideon. He is, as one might imagine, a step ahead. Din finds him in Grogu’s cell with the darksaber drawn and hovering over the little guy’s head. There’s an interesting tension building because a deal is struck, a deal that Gideon, of course, betrays. “Curse your sudden, yet inevitable betrayal,” I could hear Wash yelling in that famous episode of “Firefly.” But as we learn, the darksaber can cut through anything, except Beskar armor. And that little tidbit is what saves our hero as he ultimately defeats Gideon and drags him bound to the bridge of the ship, where the ladies await. Unfortunately, victory isn’t completely in their grasp as these new droids seem to be resilient. Originally spaced by Mando, they seem to be equipped with jets on their feet and have returned to kill everyone but Gideon and the child.

Only moments from breaking into the bridge for what would certainly be a titanic battle, a young Luke Skywalker arrives and cuts a swath through the droids with a dexterity that is at once frightening and mesmerizing. What a wonderful surprise for all the Star Wars fans out there. It was a moment that was magical in conception and application. But it wasn’t the last. Grogu’s moment of saying goodbye, and Din Djarin suddenly removing his helmet so the child can touch his face – a powerful moment, a moment of growth for Din that he would be so impacted by this child that he’d willingly make the decision to take the helmet off. 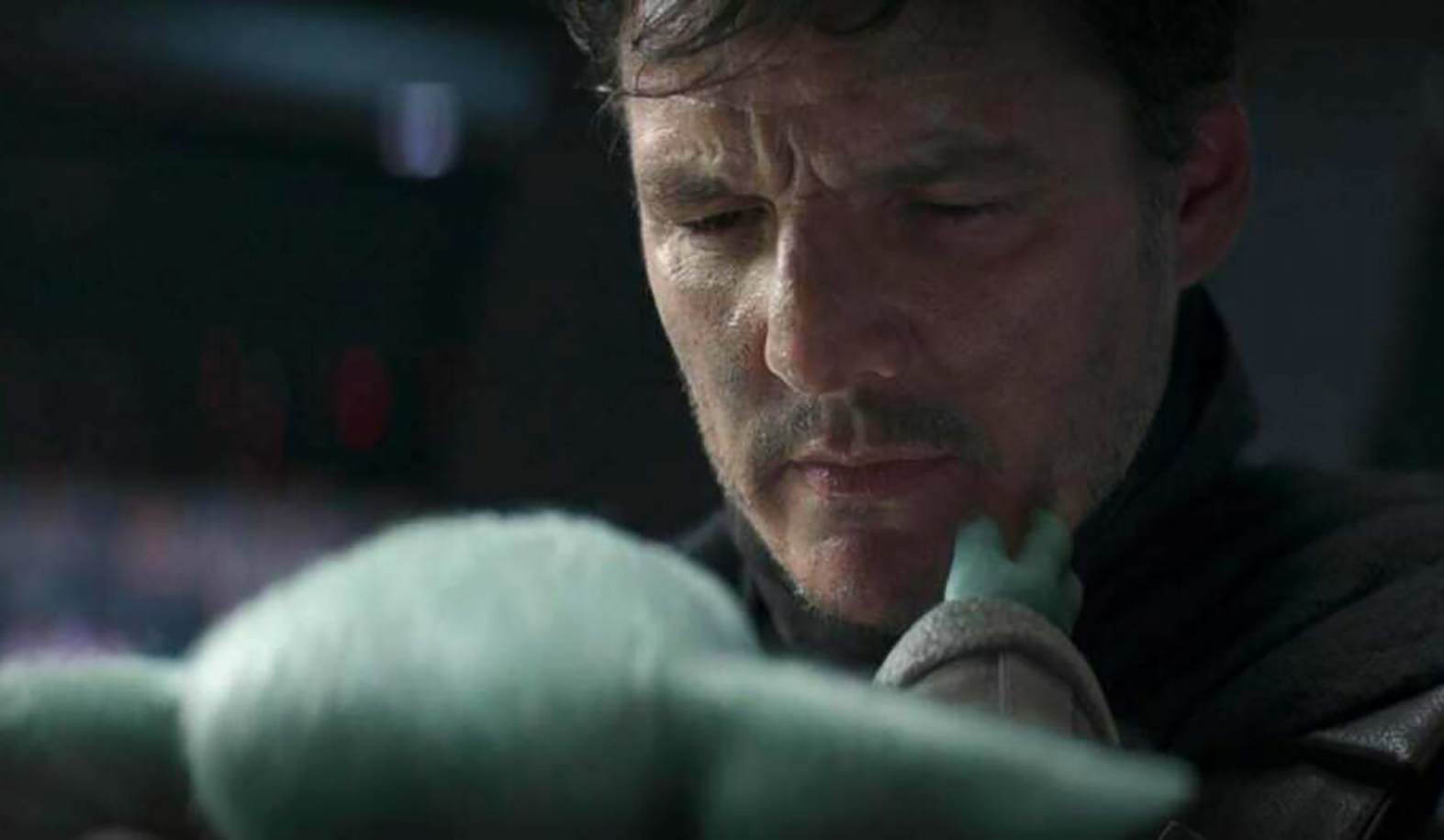 Pedro Pascal as Din Djarin without his helmet on as he says goodbye to Grogu. The Mandalorian on Disney+

Reminded me of that moment when a dying Darth Vader asks Luke to take off his helmet so he can look on his son “with my own eyes.” it was powerful and it was emotional and truly signaled that not only had Din grown as a human and Mandalorian, but that this chapter of The Mandalorian had drawn to a close after 16 episodes. I admit to having my breath taken away a bit by all of it. That’s a great sign of a show that’s found resonance within this viewer.

So now what? Well, there’s the issue of the darksaber. Turns out that simply giving the saber to Bo-Katan isn’t part of the bargain. By Mandalore law, it must be won in battle. And while Mando was happy to “yield” to Bo-Katan and hand over the sword, Moff Gideon was cackling away at the conundrum both now found themselves in. Hand it to the Moff, he’s a cool customer, a guy who seems to spend most of his time plotting and planning with contingencies. A treacherous moment may have killed Reeves on the bridge (I wasn’t sure at the time), but his attempt to kill himself was neatly foiled by Dune’s quick action. So, we shall also have to see what he knows and what can be extracted from him. But first, the darksaber issue will be an interesting one to resolve. For now, Mando is the rightful owner of this weapon.

Moff Gideon and Grogu in the cell. The Mandalorian on Disney+

Episode 208 was a fitting conclusion to a story that was ready to wrap, but also a wonderfully nuanced beginning of the next chapter of The Mandalorian. Din Djarin has grown as a character and now he’s free to pursue that “next thing.” Will that be the rebuilding of Mandalore with Bo-Katan, or will it be some other adventure. Regardless, he now knows that his Mandalorian world is much larger than he’d originally thought, a world where a bounty hunter can have a heart and a Mandalorian can remove his helmet with no loss of honor. For Din Djarin, this is the way.