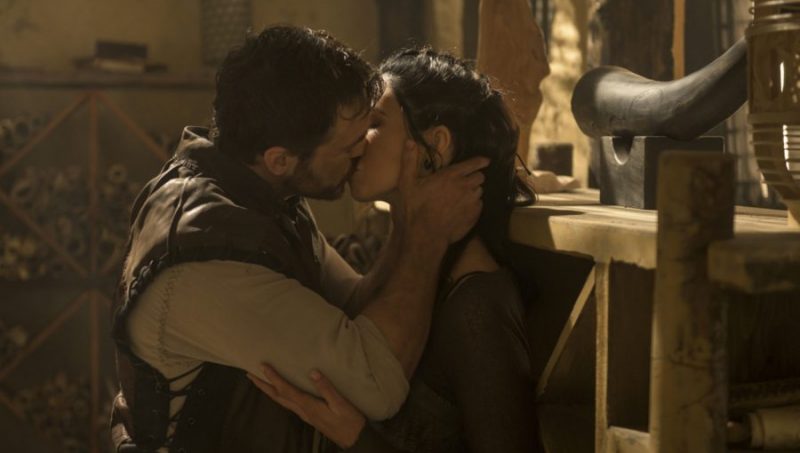 Ah, at last, the search for the Black Kinj has been fully entwined with the mystery of Talon’s father. Oh, how I have yearned for this very thing to happen and for the chance to clear up a boatload of mystery surrounding everyone’s connection to both – Kinj, “dad,” Yavalla, etc. I must admit, while episode 311 didn’t pack a ton of “wow” power in it, there were more than enough little bits and bobs of information dropped that I couldn’t help but be wonderfully intrigued. Oh yes, this thing is about to get really juicy.

However, in the interests of expediency and a crush of Christmas-related draws on my time, rather than regale you with a long, fancifully written missive about the many aspects of this episode, I’m going to do it in quick and easily digestible bullet-points. That way I can be concise and to the point without getting too far off the rails, though I do love a good “off the rails” kind of rant about some aspect of this show. If you like that, too, join me for The Outpost Calling radio show every Tuesday night at 6 p.m. (PT) at Threeifbyspace.net under “live radio.” Tangents are my specialty and I do adore them when it comes to this show. 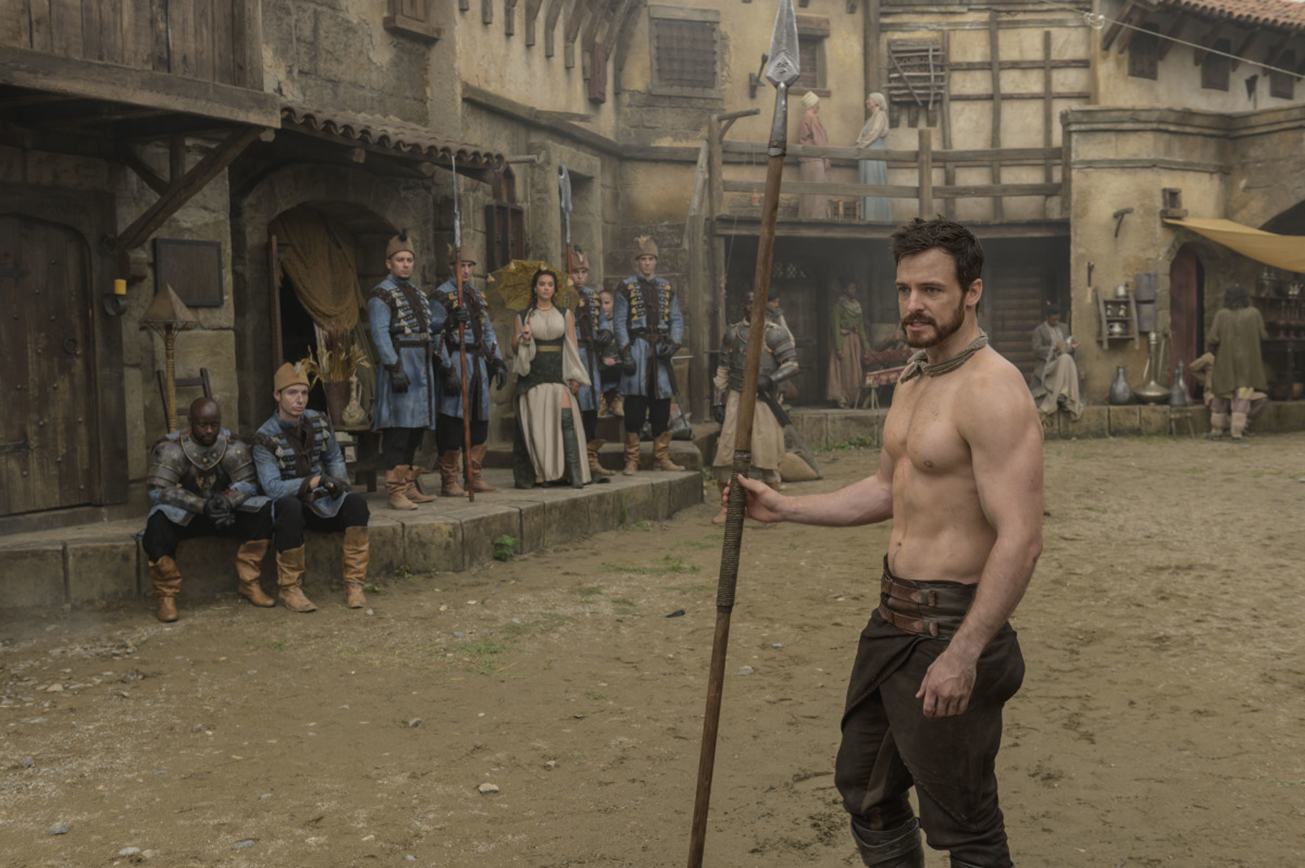 So, without further ado, here’s a look at some interesting aspects of episode 311.

The Plain of Ashes:
Well, I was wrong on this one as I figured everything would stay in the realm. Not so, as Talon, Zed and Wren decide that a trip to that dreary place is exactly what’s needed as all other attempts to defeat Yavalla have failed. We learn that Talon’s dad may not be entirely dead. Mostly dead in probability, but there’s a chance. And within that, we learn that Yavalla took the box from her father, rather than got the box from her father. And lost many men doing it. So, the lies we knew Yavalla was telling are starting to come to fruition, which is a juicy little reveal, isn’t it?

And with all that planning, we learn a few things. First, that Zed has a younger brother named Corvin (Sp?), who, according to Wren, is a bit on the crazy side. How does Wren know this? Apparently, she saved his life some time ago and he cast his affection on Wren in a crazed and nutty way – and I’m not entirely convinced Wren didn’t enjoy a bit of it. However, Wren feels that she may be the only one who can get through to him. Why? Because he has information that could lead our brave trio to the location of Talon’s dad. His living space was in the labyrinth of volcano tubes, which is a maze that required a unique map. Corvin, it would seem, helped Talon’s dad create the map and therefore has the ability to divine its secrets. Wow, talk about a bunch of interesting stuff, right? 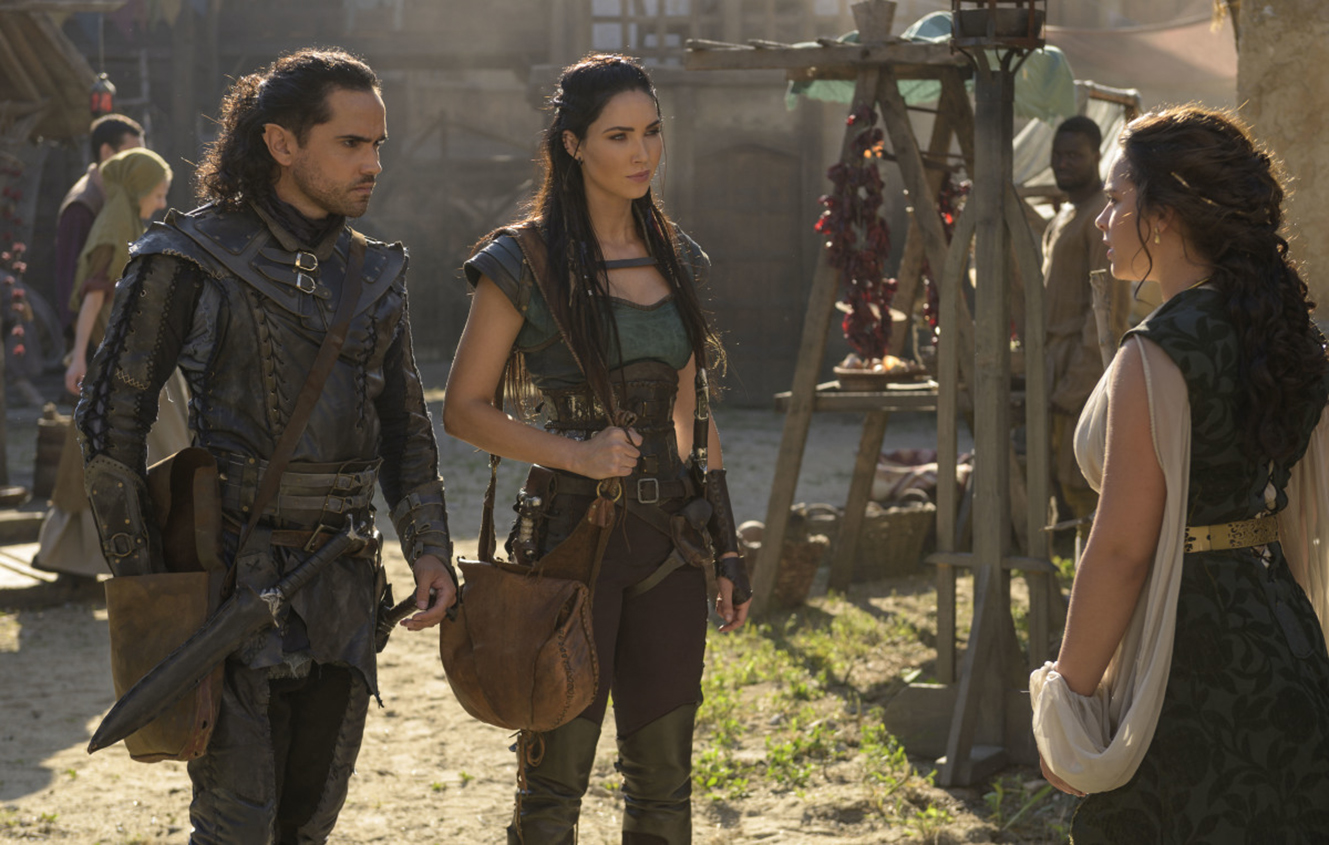 So Talon’s quest is two-fold – to locate the black Kinj so it can be used against Yavalla and to see if her father yet lives. It looks like there’s going to be a party in the Plain of Ashes and Zed, Wren and Talon are the ones who will be uninvited guests. I admit that the prospect of discovering a live father – Sai-Vek Redwan – opens up some very intriguing doors. This could be fun. Can’t wait to get a look at the crazed younger brother of Zed, too. And as an aside, Zed just keeps getting better and better, doesn’t he? Reece Ritchie has really dialed into this character and now that he’s on a little better path, Zed is a whole lot of fun and appears to have a decent sense of humor about him. More, please.

The Outpost Security:
This is just a personal pet peeve, but I’m beginning to think Queen Gwynn needs to do some flogging of her guards and security forces. I’ve lost track of how many people have broken out of the dungeons, and this episode gave us a glimpse into the capabilities of the gate guards – and it ain’t pretty. Because of a snake oil salesman that peddled false curative potions, as well as a love-sick guard, the United have now infiltrated the Outpost – in force. I can’t say I’m too impressed with the “seal the city tight’ execution that went on, but I suppose it could be worse. Wait, with The United in the Outpost, I guess it likely will get worse, right. Security certainly isn’t what it once was, I guess. 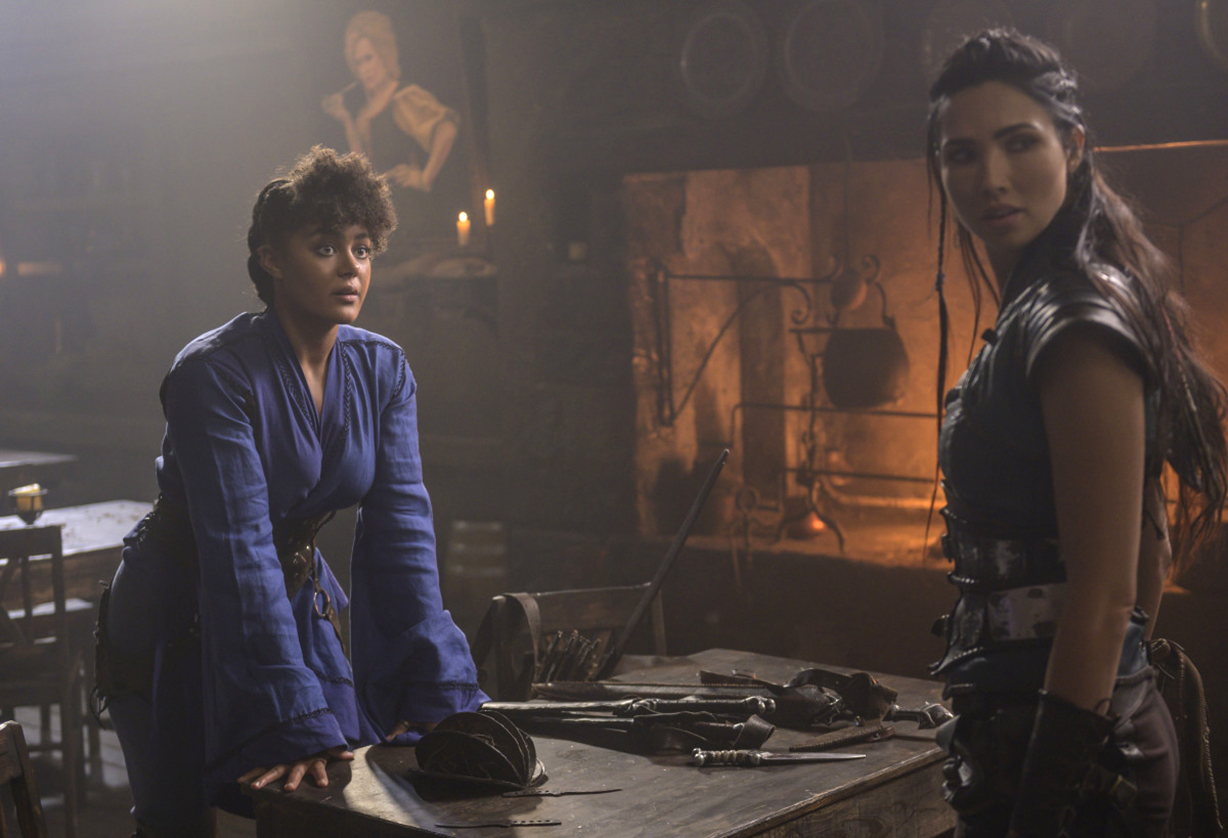 Falista for the change:
Well, that was an interesting episode for Falista, wasn’t it? Kind of went from an entitled, petulant, condescending snot to a woman who realized what it was like to not be in control. Falista opens with an openly contemptuous moment with Garret that she ends with a snarky put down and things just spiral from there. They hit their crescendo when she’s summoned before Gwynn to get a little slap on the wrist and, after a snide comment from Garret (Hey, not sure that was appropriate, big guy?), the anger boils, the Kinj is activated and her secret is out – she has the red kinj. Garret is horrified while Gwynn thinks the best thing is for her to be tossed in a dungeon cell.

It’s clear now that Falista wasn’t aware of the Kinj and the mere fact that she can’t control it terrifies her. She’s a woman who has used manipulation, leverage and other means to kind of pave her own road and this revelation that there’s a living entity within her head that she can’t control kind of humbles her. It gets better, too, after Tobin demonstrates his feelings for Falista by begging for her freedom. Gwynn visits the cells and finds a contrite and humbled Falista.

So terrified of the Kinj is she that she tries to pass it on to Gwynn, someone she now views as a better person. For all Falista’s social climbing and ambition, the thought she might hurt or even kill someone with this Kinj knocks her back – and gets her released. It’s an interesting development and one that reaches a very interesting conclusion when she later releases Tobin from his marriage vows to her. He’s now free to marry Gwynn if he wishes. But what will Tobin do, one ponders? 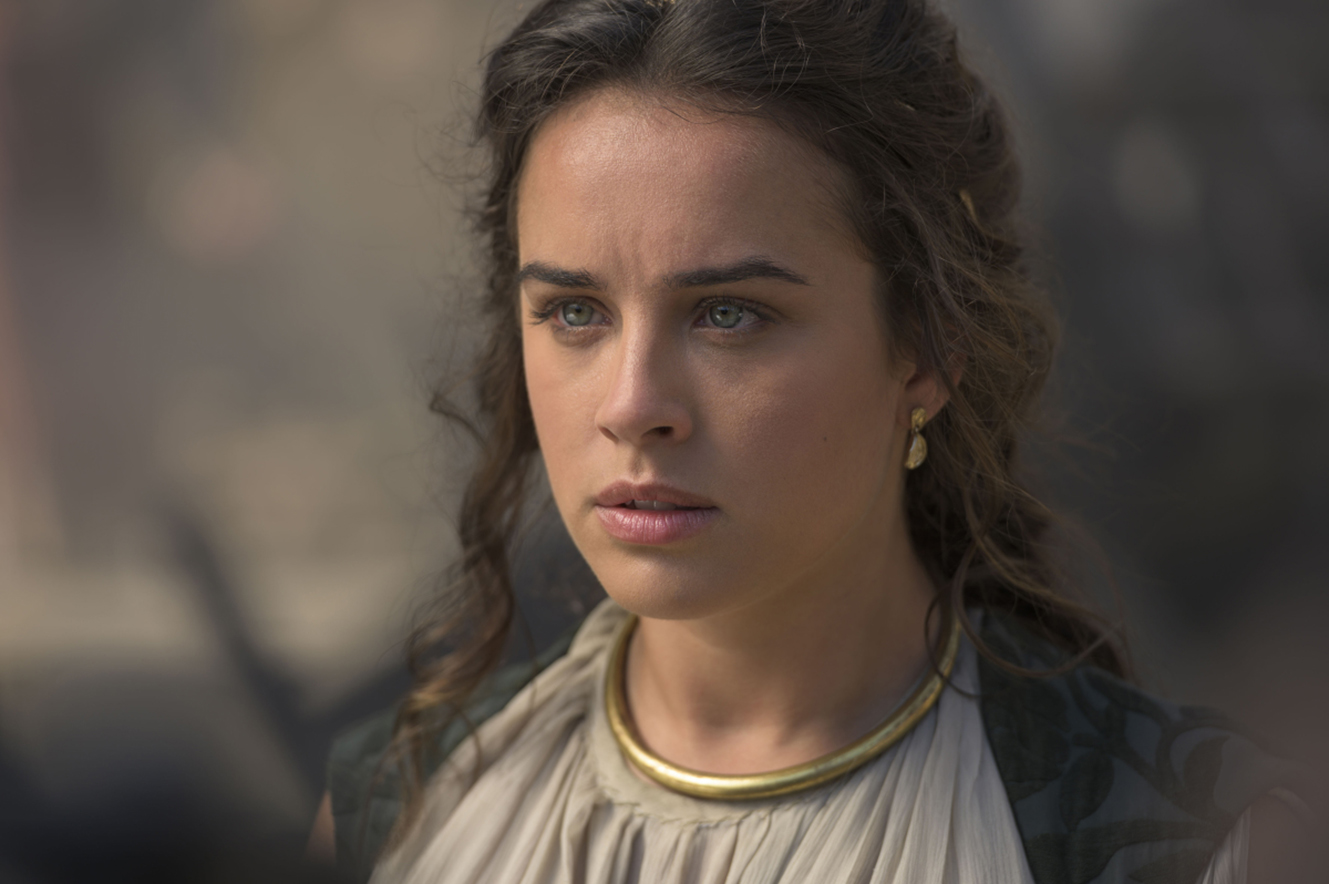 No, I didn’t see that one coming and it certainly opens up a range of possibilities, doesn’t it? Falista, in the span of one episode, has seen a nearly total recalibration of her personality, her values and her way of thinking and behaving. She’s been humbled and it looks good on her. I’m really enjoying the work of Georgia May Foote since she’s come on the scene. A character that keeps things tingling and somewhat unexpected. Good stuff.

Janzo:
He’s not happy Wren is headed off to the Plain of Ashes, and he’s certainly more curious about her vaguely discussed relationship with this Corvin guy, so he’s got a lot rolling around in that noggin’. Janzo makes an interesting confession to Falista in that he admits to being perpetually “terrified” at this point. And yet, he’s still able to work, produce wonderful miracles, and offer some very nice grounded advice when called for. He’s also capable of exposing a charlatan who has entered the Outpost and is peddling fake cures for the infection.

In fact, Janzo’s theatrical takedown of this guy was a pure pleasure to watch. It was brash, it was bold, and it was confidently pulled off. I thought it a wonderfully light moment in an episode that didn’t have a ton of them as things seem to go from bad to worse. Anand Desai-Barochia seems to be continually compared to Jerry Lewis in the social media realm, but I would posit another actor whom I think he reminds me of more – the legendary Danny Kaye of The Court Jester and White Christmas fame. Just the way Anand delivers his dialogue, the comebacks, the snarky comments, the problem solving, etc., just seems to be very comparable to me. On Twitter today I admitted that I could see him verbally sparring with Basil Rathbone in The Court Jester very easily. See, there’s a tangent that I didn’t know was going to come out. 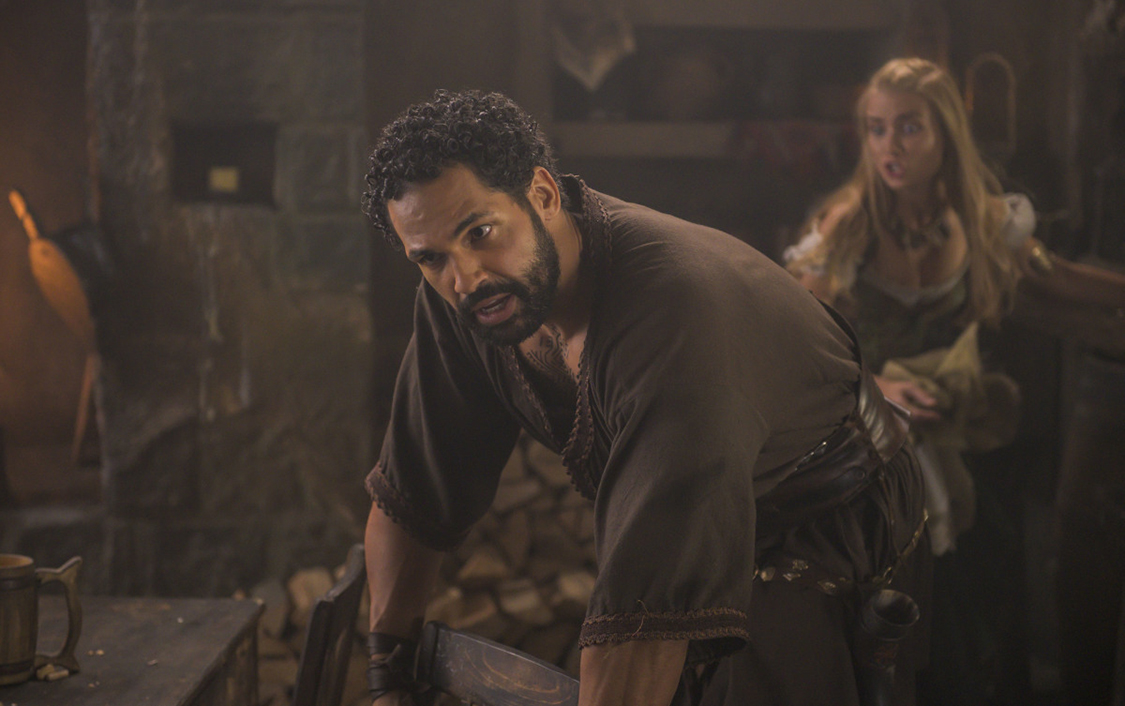 My point is, that while we may look at Janzo as this comedic figure within The Outpost, look a little deeper and you find an actor putting together a plethora of layered and subtle work within the mere “acting” of Janzo. But yes, his exposing of the charlatan was fun and brilliantly done. And remember, it wasn’t done simply to expose a liar, it was done because Janzo knows this snake oil salesman is putting the Outpost in danger – which comes to fruition.

Tobin-Garret fight:
First of all, drunk Tobin always seems to make me smile. I think it’s because he gets a bit childlike when he’s deep in his cups. Whatever the reason, I certainly enjoyed the go at fisticuffs between drunk Tobin and a Garret that was trying to be sensible. There’s punches into the wall, ale mugs crushed, a chase through the Night Shade that ends up over a railing and finishes in the dirt in the street. In-between, we get a look at what both of these guys are kind of feeling. it was a fight and it was funny at times, but there was also some subtle messaging in there.

As strained as things are because of Gwynn’s decision. Drunk Tobin opens up by getting slapped, then punched, and finally driving his fist into a wall before he’s able to at least get a tiny big of satisfaction (Ale cup to the head, baby). I liked that Spears appeals to he and Tobin’s friendship to get past these issues and emotions that are certainly confounding the baron. It’s a noble gesture and he genuinely doesn’t want to fight with his brother-in-arms. So there, with both on their backs, blood trickling from their mouth and nose, they manage to find a common ground they both can live with. I really enjoy the work that Jake Stormoen and Aaron Fontaine deliver when they have scenes together. They are very much alike, but also very different and those two actors manage to cram a nice load of good things into a few seconds. 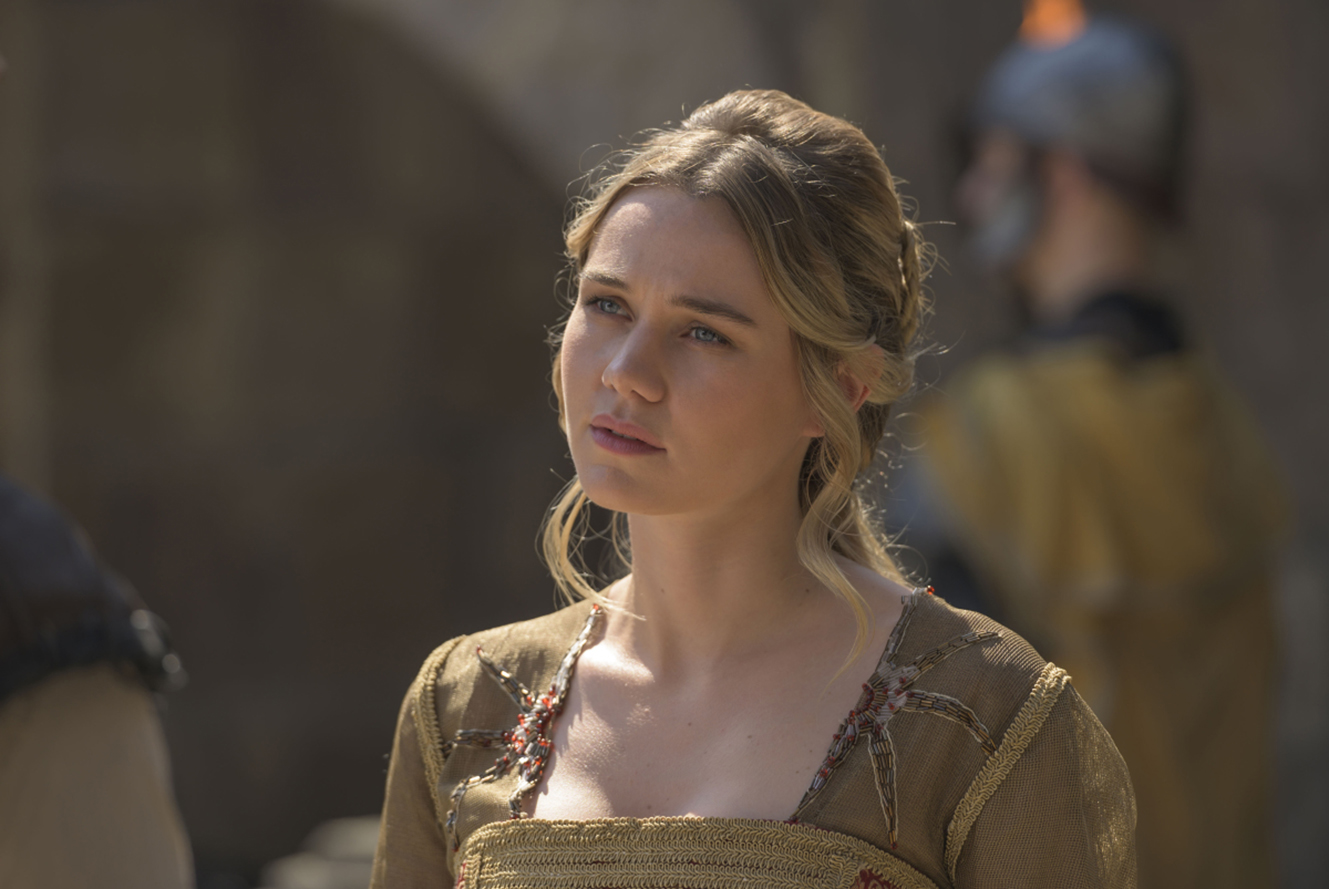 What’s next?
I am very excited about this whole trip to the Plain of Ashes. Talon’s dad, Zed’s brother, Wren and Yavalla’s relationship to the father, box and black Kinj, and just the chance to explore this place a little more. We know that Yavalla is marching on the Outpost with her army of The United – funny how these peace and harmony despotic rulers seem to need not only godhood, but plenty of bloodshed. Seems to be a pattern with these delusional folks. Still, there’s a battle coming and now with infected members of her cult inside the Outpost, there’s a lot of be worried about. Speaking of worried, I worry about the fate of Munt. It was good to see Warlita show up in this episode and to learn just how she cares for the big guy. I worry about what will happen when Munt arrives at the Outpost and perhaps comes face-to-face with someone he cares about.