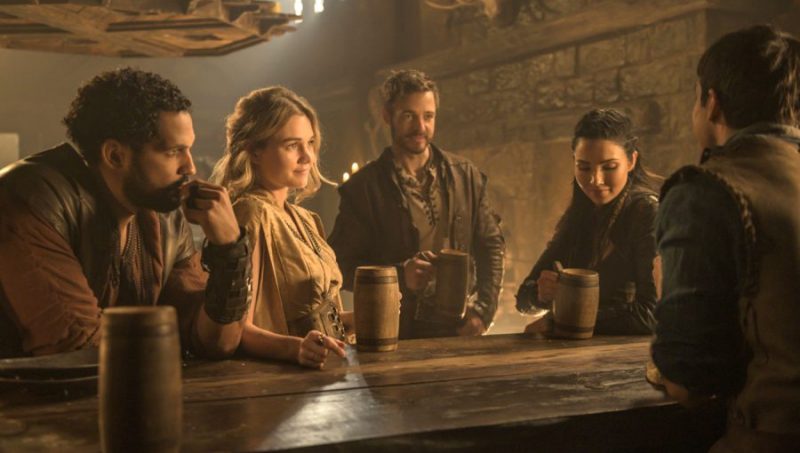 Well, at long last, the final Kinj shoe has fallen. And its kind of a biggie type of reveal, right? Episode 309 of The Outpost had a distinctly “set up” feel to it as a lot of interesting things were put in motion. It feels like an episode that was designed to kid of wheel us into place for the mad dash across the final four episodes of this fantastic season 3A. There were surprises, shocks, impetuousness and another reminder just how poorly they guard prisoners at The Outpost.

Before we get too far along, let’s take a moment to congratulate Imogen Waterhouse, our own Queen Gwynn, who made her directorial debut with this episode. I thought it was fun, interesting and certainly moved the story along nicely. Imogene, well done.

For my money, the biggest tidbit that dropped from “She Is Not A God,” was the revelation of the “Black Kinj’ or the “Death Kinj.” You know me, I’ve got a little obsession with the whole Kinj construct. This one sounds particularly nasty and I wonder if it is the “ancient evil” that we have had teased our way several times this season. Mmm, not sure, but I thought the conversation between Talon and No. 2 ( of The Three) was very interesting. Kudos to Talon for her very effective information gathering technique – grab the neck and ram the face into the steel bars – worked like a charm, didn’t it? 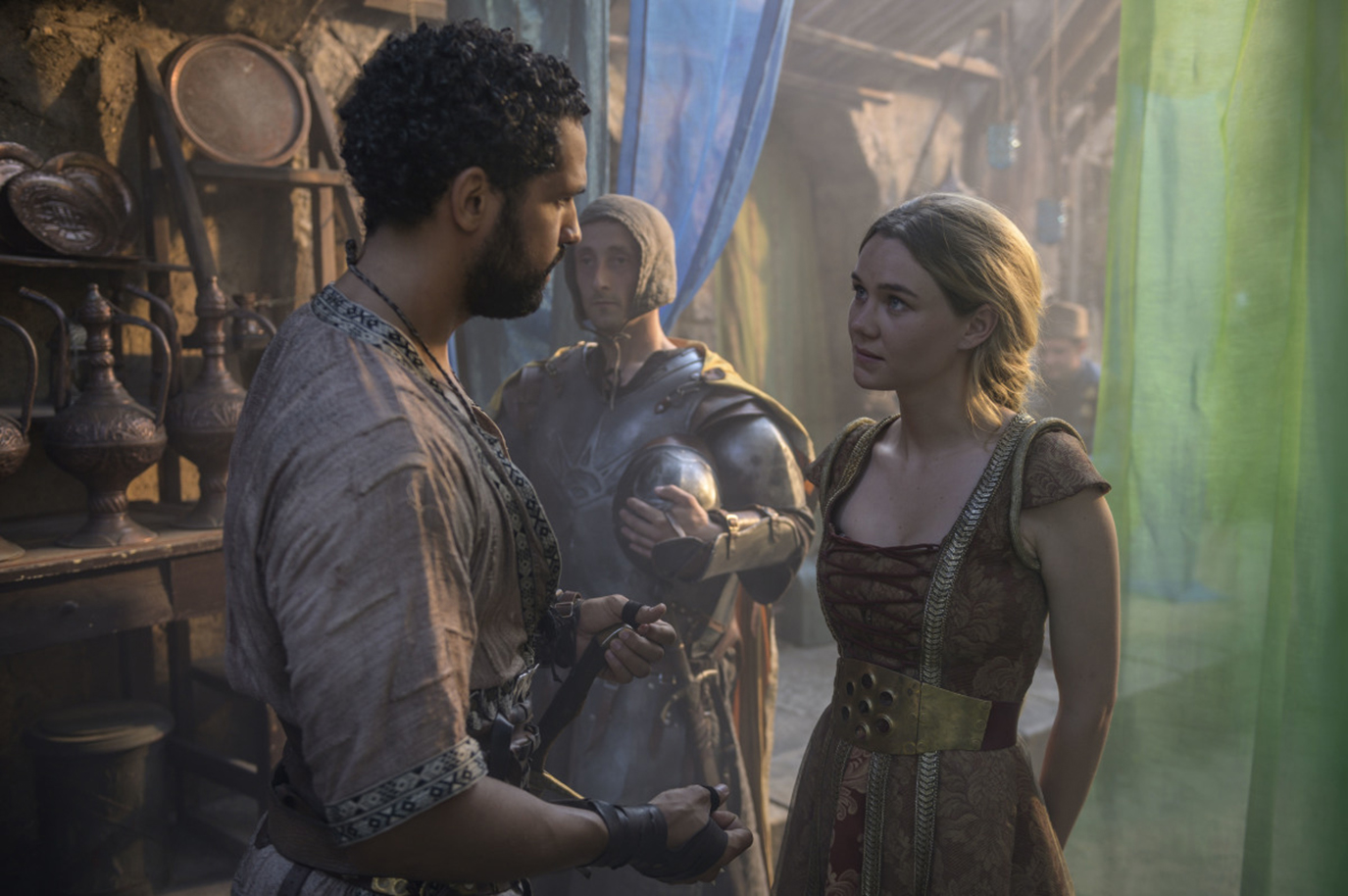 No. 2 revealed the existence of the seventh and missing Kinj, the Black Kinj, and that it is likely hiding somewhere on the Plain of Ashes. Talon wonders if it can be used to defeat Yavalla, No. 2 wonders aloud if it might be the death of everyone. Obviously, Talon is going after this thing somehow, but it got me to thinking about The Three, Talon’s dad and his reason for apparently going to Plain of Ashes, Yavalla’s complicity in all this, and just how these entities are entwined at this point.

Yavalla either lied or left out key details about Talon’s father. The Three certainly know a lot more about the Kinjes than we originally thought, and Talon’s mental wheels are already turning at possibilities that this new information has unleashed. There’s more here than meets the eye and now with No. 2 on the loose (that’s right, another successful prison break in the Outpost), I suspect we are going to rapidly get more information about everyone’s relationship to the Kinjes – and Talon’s father. There’s a story there that needs fleshing out. I think it’s coming.

Honestly, I was with Zed on the fate of the Prime Order soldiers that had been loyal to Jaaris Kromm. Dispatch them for their crimes and move on. Unfortunately, that nasty little component of people’s personality – honor – rose once again to muck up the proceedings as Queen Gwynn made the soldiers a deal – swear allegiance to her and they’d be free to serve. That was a mistake, as we see, but the bigger mistake, i thought, was dragging No. 2 out of her cell to parade before the soldiers. I get it, the play was to show them that this woman was no more than they were, she wasn’t some sort of god-like entity, just a mere mortal with all the failings that go along with it. What Gwynn didn’t consider is that by parading her before them, she provided motivation for them to save her – which they did. Swearing fealty to Gwynn doesn’t stop a lifetime of deity worship. 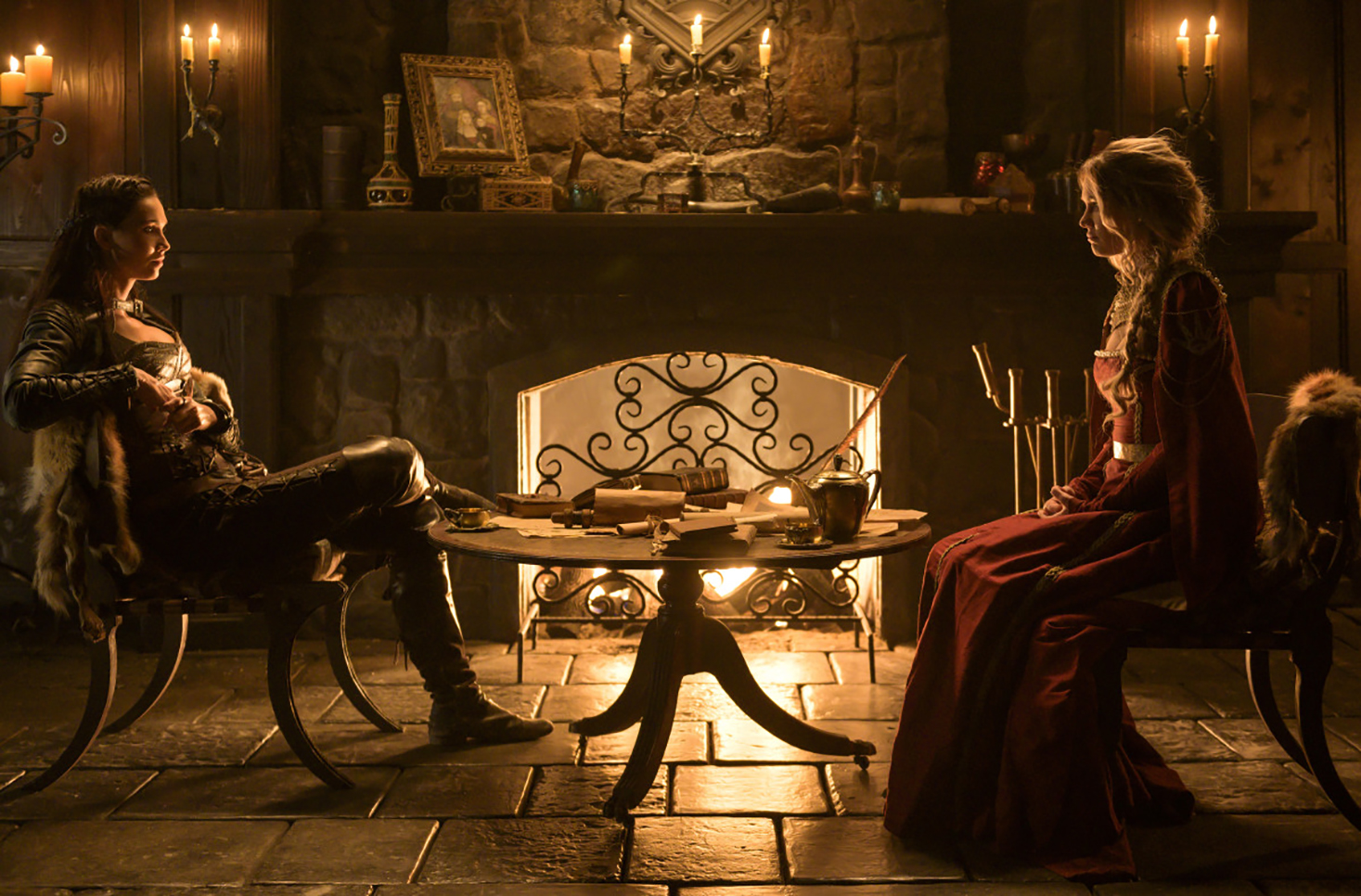 Zed spent a decent amount of this episode being frustrated, first with Gwynn’s inherent niceness and then with Wren. Well, I’m here to put my hand on Zed’s shoulder and say that “you were right, big guy. Should have gutted those despicable soldiers right there in the throne room and then strolled to the Nightshade for ale and meat.” But no, Gwynn made the loyalty play and it backfired. No. 2 is now on the loose with a small cadre of soldiers, so it should be fun to see where she pops up again – and with whom. Remember, No. 3 is out there somewhere just biding his time, transporting hither and yon.

Look, I know there’s a general feeling of dread about Falista on the social media wires, but I like this character (I see you Georgia May Foote). Yes, her stroll into the Nightshade to formally announce that she and Tobin are married was, to put it mildly, a pure power play on her part. She’s staking out her territory and letting Gwynn know who is in charge of Tobin (at least for now). Sure, I could see that being unpleasant for Tobin-Gwynn fans, but I like that bravado, that full-on brashness that leaves no room for gray area. She’s smart, she’s strong, she’s brash and she’s not afraid to let even a queen know the score. I find that an enjoyable quality.

And while that little “dropping of the bombshell” moment may have really tossed some dirt on the Gwynn garden, it didn’t bother me a whole lot. Falista, I like you. I also like that, despite this arranged marriage, she truly does have a decent investment in Tobin being the man and king he could be. Falista is no fool, she knows where Tobin’s heart (and Gwynn’s) rests for now, but she’s in this deal for the long haul and that scene later in The Nightshade where she essentially gives Tobin a verbal truth bomb was really fun. 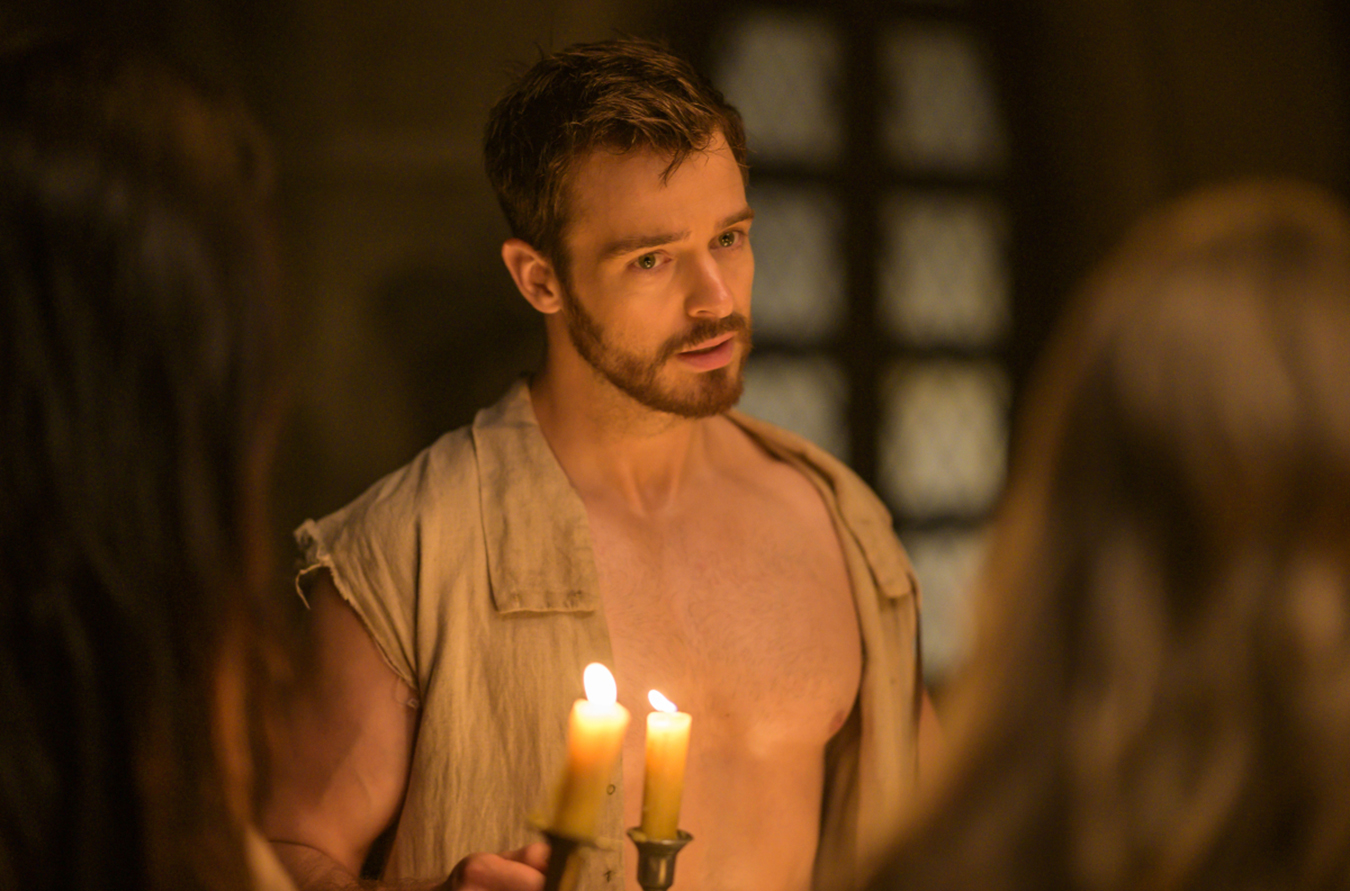 With few soldiers to command, she lets him know that there’s more than enough to “make our mark.” And with that, Falista and Tobin make their way out of the Outpost, along with what’s left of their soldiers, and head out to who-knows-what adventure. We’re not given much information on that, but off they go. I like the mystery here. Again, it makes the mind start to scramble for possible destinations. This is fantasy-adventure, after all, so I like dialing into the fantasy regularly and letting my mind ponder the possibilities.

They aren’t the only ones who head out on a walk-about, however. Talon and Zed decide it’s time to hunt down Yavalla and thanks to clues and some clever deductions, are soon on the trail of Yavalla’s followers, who are on pilgrimage to Yavalla’s stronghold. Meanwhile. Janzo and Wren, demonstrating that wonderful mental nimbleness and outside-the-box thinking, come up with three doses of a cure for the parasite Kinj (Implanting it on the seal of a parchment is, in a word, genius stuff). After testing one successfully on an infected, Wren is determined to beat Talon and Zed to her mother, administer the cure, and hopefully end this plague. They take Munt along for some muscle.

By the way, Wren with the rat blood all over her face was a delightful little addition. It seemed so…Wren. And did you notice as they were working out the cure, that Janzo’s glasses were fogged up for most of the scene? Some cold and warmth must have been part of the set. It just struck me as kind of funny – not really a big thing. Just an oddity that popped up. I also like the fact that Wren really wants to see her mother saved. She notes to Janzo at one point that her mother is as much a victim as anyone – even as she also admits “mum” wasn’t that great a “mum.” But hey, family is family and Wren wants to save hers. . 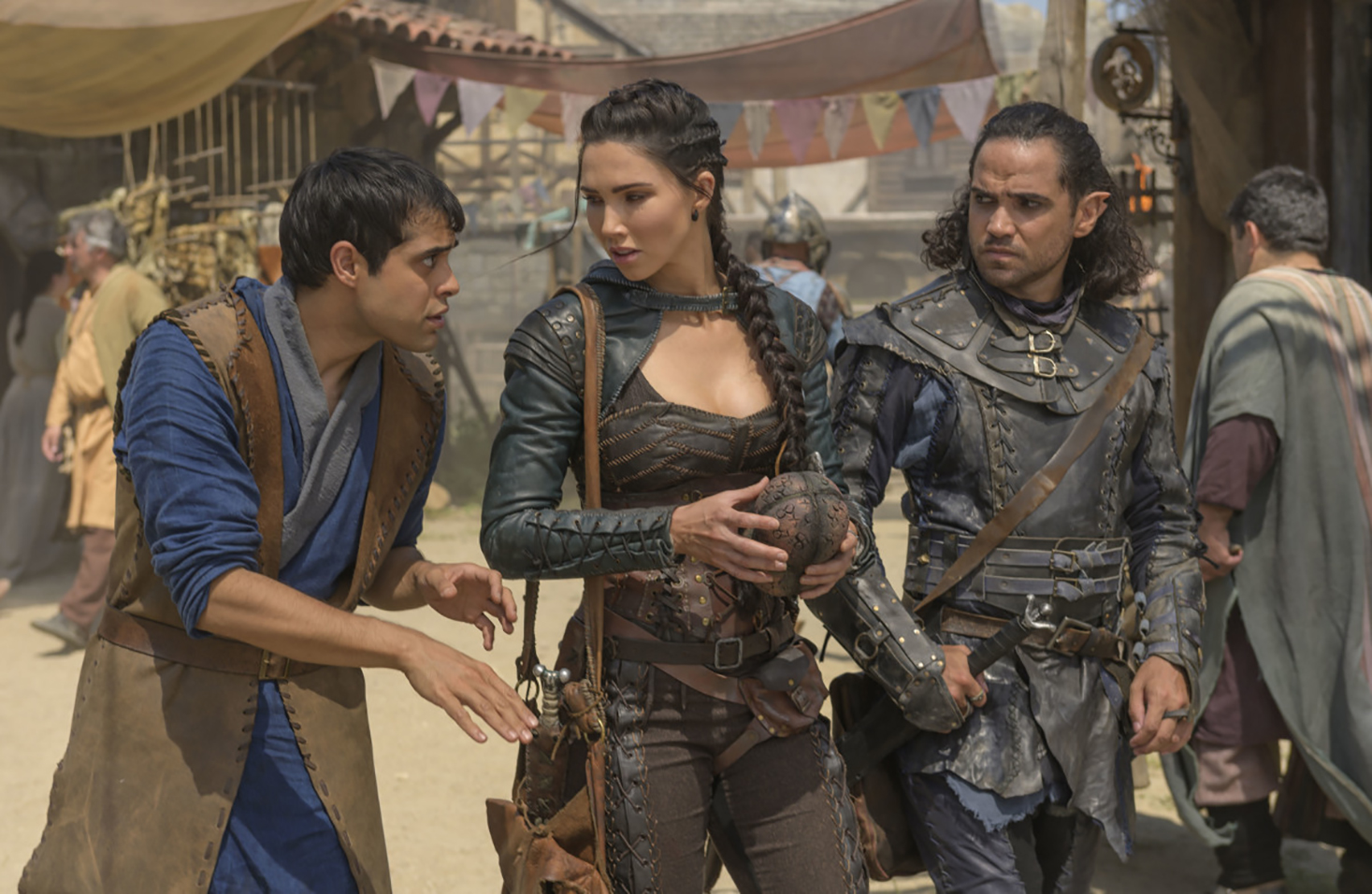 And she’s right. Zed and Talon, while in the forest tracking Yavalla’s disciples, wonder aloud if Yavalla was always like this or if the Kinj is making her like this. I love this scene for another reason – Zed again admits to how hard it has been to have been wrong about Yavalla and a cause he’d devoted his life to. Man, I feel for Zed more and more. Yavalla, of course, knows all as an infected hawk has been tracking Zed and Talon, while other infected are escorting Wren to her mother. All paths, it would seem, will converge on Yavalla’s mountain sanctuary. Wonder if Tobin and Falista will join the party.

And with that, the Outpost empties of most of our heroes. Two teams head toward Yavalla by their own various means, Tobin and Falista appear to be glory hunting on some unnamed quest, and Gwynn and Garret remain at the outpost to sort it all out and hope for the best. Again, it feels like an episode that was specifically designed to turn us onto the highway that ultimately takes us to the conclusion of this season’s action.

An interesting side note to me was the Gwynn-Garret reminisce moments. Gwynn is hurt and confused by Tobin’s decision (though I completely get why he felt compelled to do it for Gwynn) and Garret isn’t on the various hunts for Yavalla. That must be galling for him, though the reasoning was spot-on. Together  in the throne room, they remember their youth together, the thoughts and emotions of their hearts, and we see a flicker of the attraction they had for each other long before. It’s interesting that Garret admits that he understood from the first that Gwynn was not meant for him. That seems to catch Gwynn by surprise a bit. Interesting how she doesn’t dial into the class system at times. It’s refreshing on some levels. 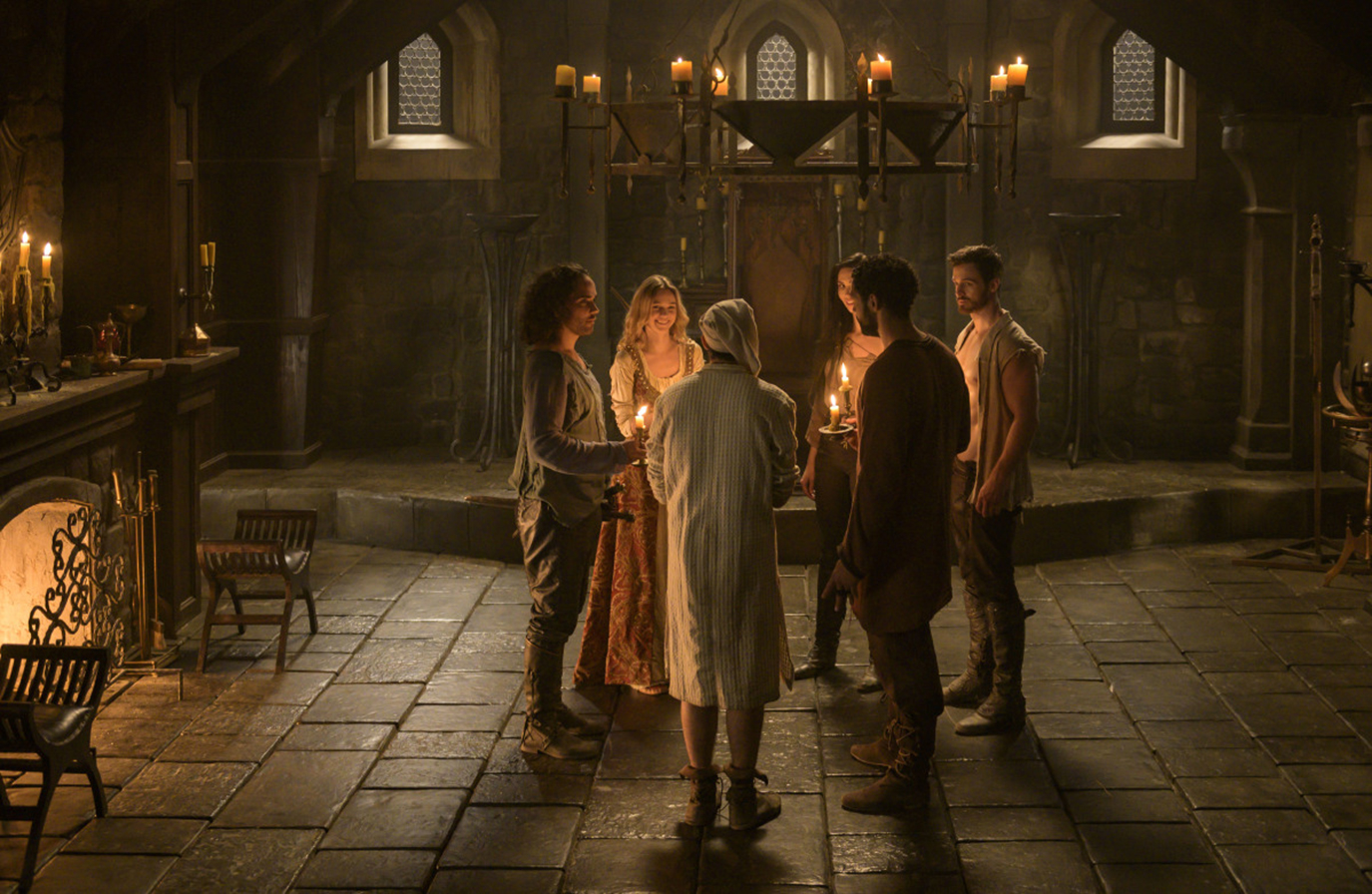 I admit, that as they worked through the nervousness of their feelings, the awkwardness of emotions re-emerging, I wondered if they, the left behinds, might do something about those feelings? Would that be a good decision? No way. That would simply pile complications and trouble on top of everything else. Still, there was a moment there where I wondered, “What are these two contemplating as they are left all alone together?” Mmmm, that wouldn’t be good, no way.

We also got a little more discussion about that black box that Yavalla brought with her from the Plain of Ashes. Has it given up all its secrets yet. There’s a reason Talon’s dad took it with him to that horrible place, right? Could the black Kinj somehow be hiding within that box? Maybe not, but now that we know it exists, and that The Three have been searching for it for centuries (The Three order is older than their time ruling the realm? That’s interesting, isn’t it?), and that box keeps popping up in conversation – could another secret compartment reveal this horrible weapon? Just pondering that thought out loud.

“It would kill whomever its bearer touches. Even while seeking it, we lived in fear of finding it. Some things are best left unfound,” No. 2 tells Talon as blood drips from her nose. Now that’s an intriguing string of words, isn’t it? Plenty to talk about on this week’s The Outpost Calling radio show.