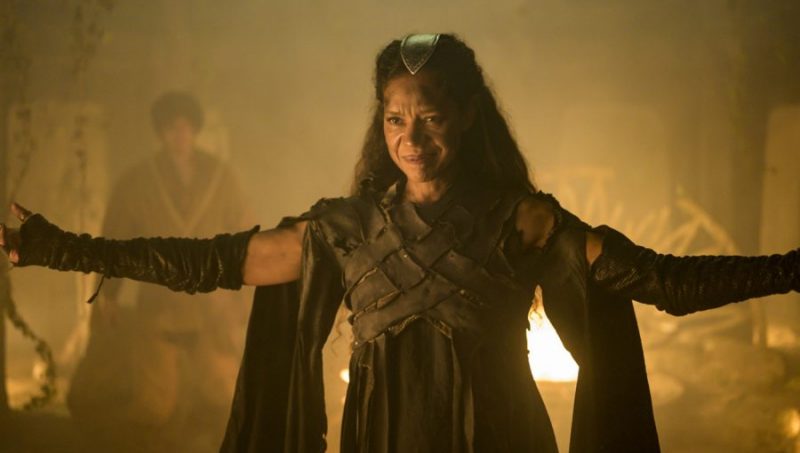 Well, if Yavalla isn’t a god, she’s doing a pretty solid impersonation of one. That was one of the big takeaways from Episode 310, “From Paradise to Hell and Back,” as our two teams of “rescuers” converge on Yavalla’s stronghold and discover just how formidable, and popular, she has become. The Kinj parasites are changing the landscape and fabric of the realm, all of it overseen by Yavalla, who greets Wren, Janzo and Munt, along with Talon and Zed, in her own chilling, impressive way.

With only three more episodes left in season 3A, it looks like the Gallwood Outpost is going to be the scene of yet another battle. That is if Yavalla has her way. And as we sit here right now, it would seem her way has some level of divinity connected with it. Either that or she’s a remarkable healer. There’s a welling up of momentum in this episode that feels as though it’s about to send us hurtling to something pretty wild by the time this thing ends in January. What we did learn in this episode is that neither fire nor beheading will keep Yavalla from her appointed rounds as the purveyor of The United way. And if that doesn’t worry everyone, something’s wrong. Very wrong. 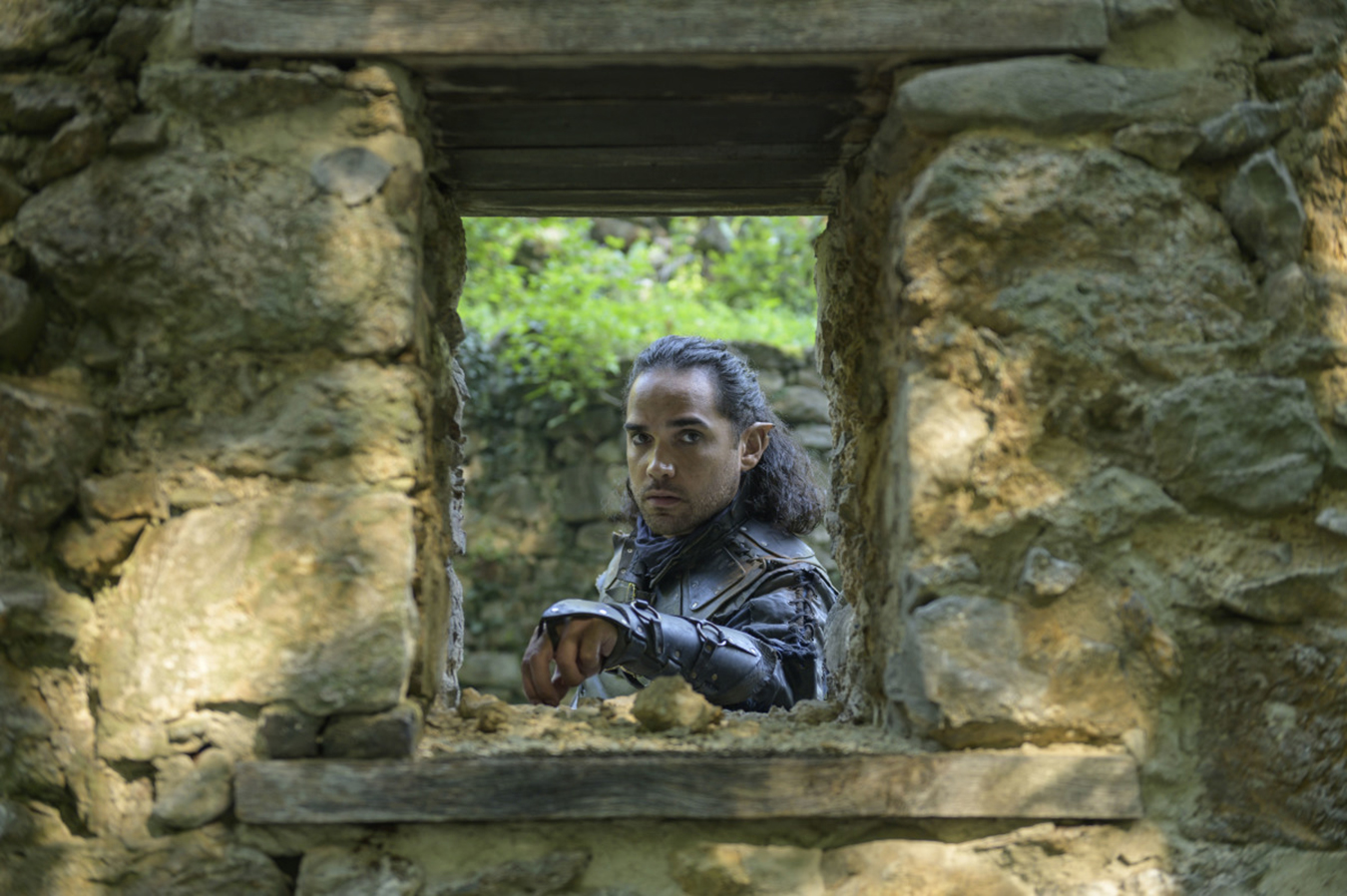 Munt, Wren and Janzo reach Yavalla’s keep first and Wren is able to gain an audience with her mother. Remember, she and Janzo have two more hypos of “the cure” and Wren is able to get her mother close enough to give her a jab in the neck. Well, now we know that “the cure” will have no impact on Yavalla. It was an interesting exchange between mother and daughter as Wren continued to try to talk sense into Yavalla. I suppose a child would be the last to recognize the hopelessness that has engulfed this type of situation, but when Yavalla proclaims herself a God to her daughter, that’s kind of the last straw. Wren’s face is that of someone who realizes it’s too late and she strikes. Yavalla feels no ill effects and before you know it, essentially mocks the effort and calls forth her minions. Before you know it, Munt and Wren are infected.

Yup, while Janzo escapes thanks to timely intervention from Talon and Zed, who gets to set off the incendiary device Janzo had created. I enjoyed his little satisfied smirk as the idea to use it came over Zed. There’s really a fun little mischievous side to that Blackblood. I like the trait. Well done, Zed. Once the fire begins, it allowed our trio to escape and live to fight another day.

Janzo once again shows his brilliance, and seems to have an epiphany where he admits to his own brilliance. Out in the greenwood, with nothing but his own wits, he begins putting together another incendiary device with the items and herbs and roots that were in the forest and ruins the three had fled to. Combine it into a nice mixture, find the proper pumpkin to hollow out, and glory be – another incendiary device that Talon and Zed eventually get to use…on Yavallla…and it doesn’t work.

That’s right, not only do Talon and Zed finally get their chance at Yavalla, but their fiery effort fails in a horrible, smokey way. As an aside, while our two heroes are hunting down Yavalla, Janzo follows his heart and searches out his lady love, Wren. A little trickeration and slight of hand and he jabs her with the last of the “cure.” Unfortunately, Munt was not so lucky and remains under Yavalla’s sway. 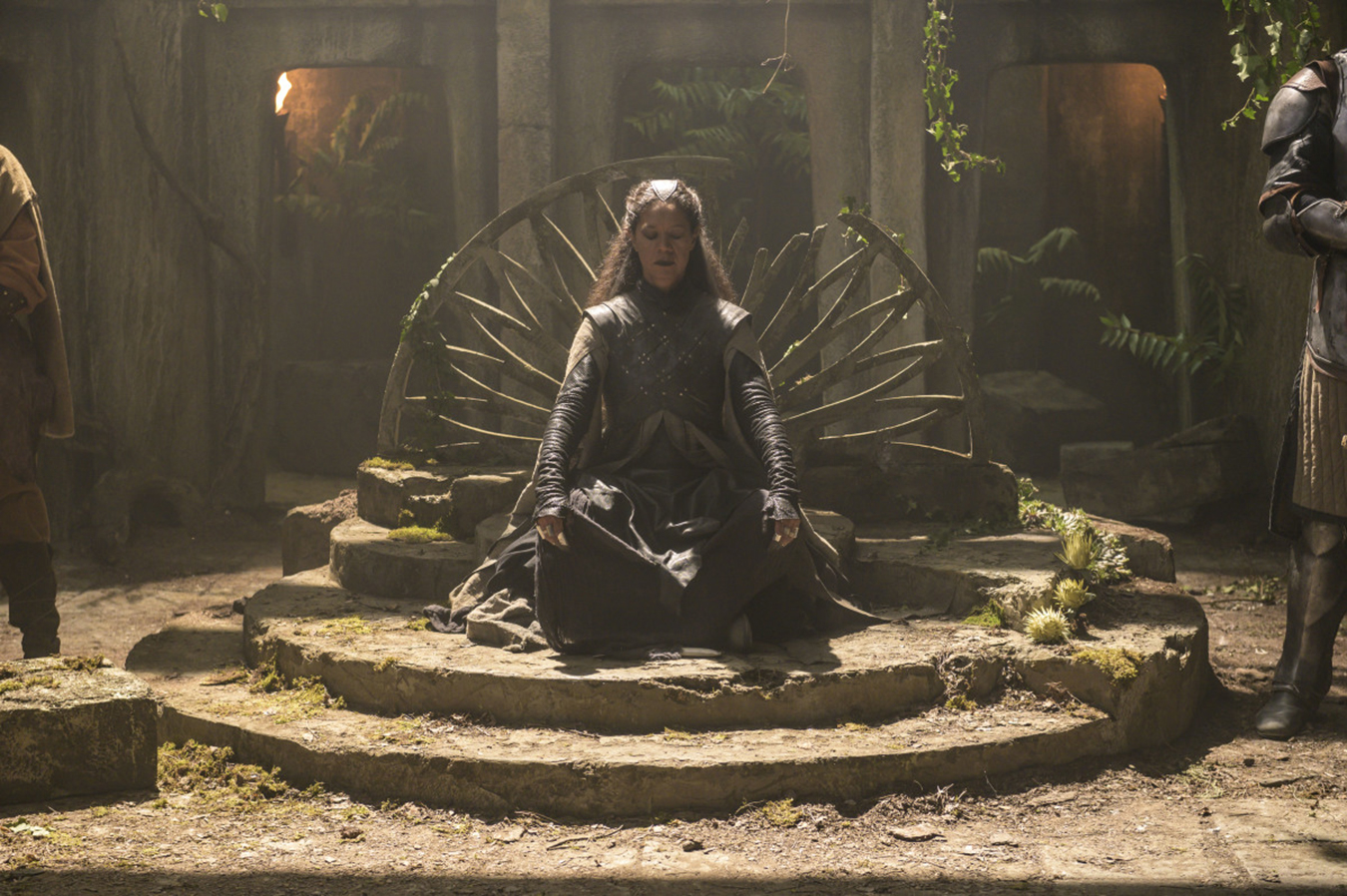 But it’s what happens in Yavalla’s room that is pretty impressive. A little verbal jab and parry between the three and Zed fires the pumpkin, creating a maelstrom of flame that Yavalla seems to succumb to. Additionally, Talon offers the capper by jumping in for a beheading of our antagonist. Easy peasy, right? They had a plan, they had a purpose, and as all of the infected come to a complete stop, frozen in the moment, it looks as though the burning and beheading of Yavalla has delivered the win.

Nay, my friends. Like a Phoenix rising from the ashes of disappointment, Yavalla, suddenly whole and with that calm little smile on her face, walks through the smoke and ashes to remind our heroes that she’s a god and you don’t mess with gods. Talon and Zed beat a hasty retreat, no doubt wondering how they were able to actually accomplish their plan and have it fail so miserably. Divine intervention, perhaps?

I thought there was an interesting moment when Yavalla was looking through Wren’s mind and she got snippets of what’s going on at the Outpost. When she came to the memory of No. 2, she kind of reacted with a start. I’m starting to get the distinct impression that there is a tie-in between The Three, the Blackbloods (and particularly Yavalla), Talon’s mom and dad, Talon herself and I’ll add Zed to that mix. There’s something that binds all these elements together and I don’t buy Yavalla’s explanation about her dad to Talon early on. No, I do not. 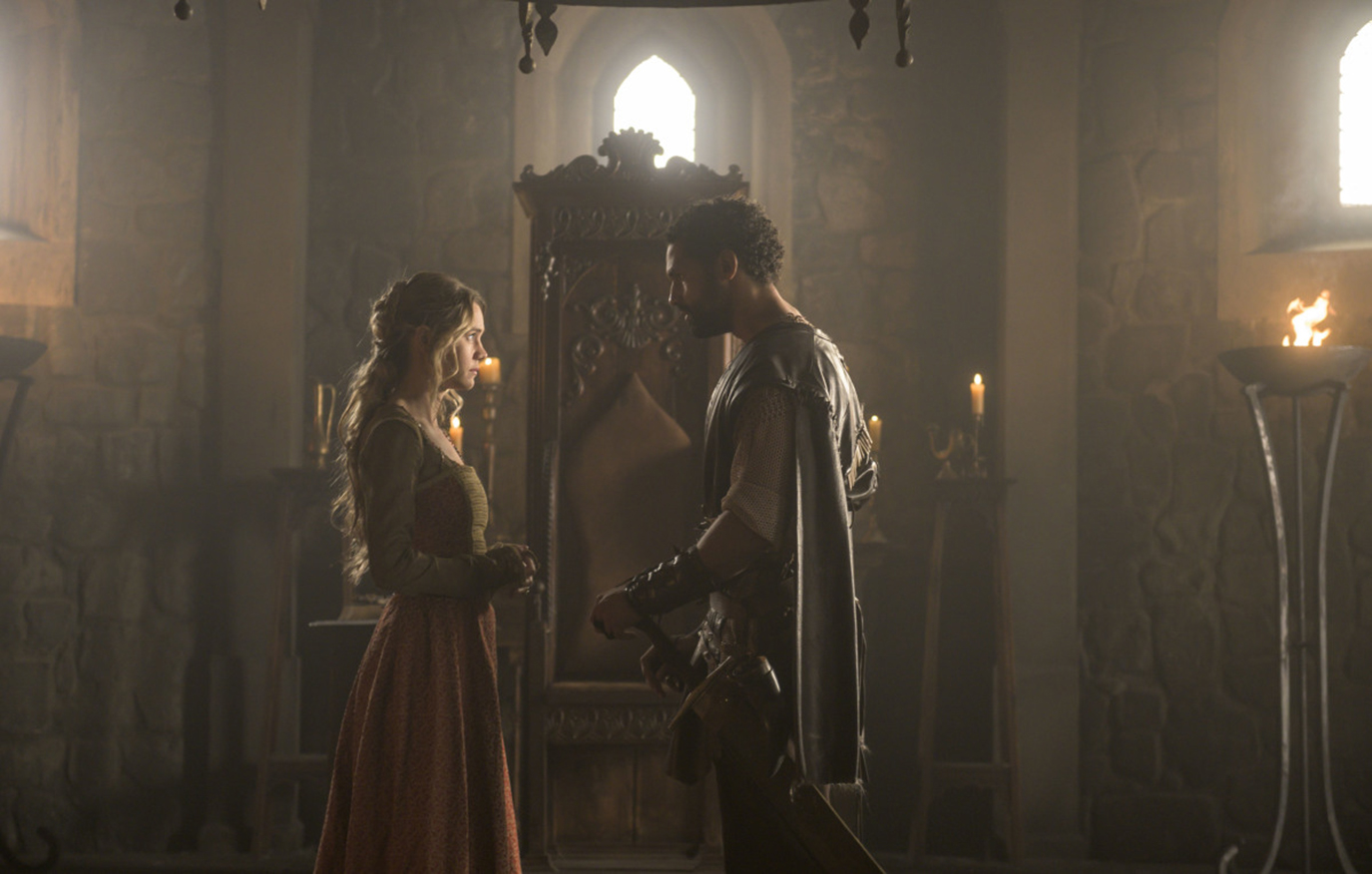 Three more episodes to see what might be revealed – unless they choose to let it ride until season 3B starts sometime next year. Ugghh, don’t do it to us Dean Devlin. Let’s have some info now, please.

Meanwhile, away from the greenwood, Garret is trying to make himself useful to Gwynn even though he’d much rather be out in the realm pillaging Yavalla’s world. He works on defenses for the Outpost and he and Gwynn have a nice little moment where she needs a hug and he reaffirms his romantic fealty to Talon. Turns out, Gwynn isn’t looking for love in all the wrong places, but simply needs reassurance from someone she holds in great regard. So that kind of settles that – Gwynn and Garret are in the friend zone and they like it that way.

Whew, that was bothering some folks. But now you know, with Gwynn vulnerable and in his arms, Garret demonstrates a chivalrous and honorable side that is very much an early Garret trademark. So, stop the rumors, the kids are alright. Friend zone engaged.

The Falista-Tobin-Gwynn triangle takes a very interesting turn as Tobin and Falista, along with their troops, return to the Outpost laden with food from throughout the realm. This should thrill Gwynn as starvation was taking a huge toll on her people. However, she doesn’t seem too thrilled – I assume by the couple’s return. She says a big part of it was Tobin’s departure without a word, but it’s easy to see there’s a lot of unresolved issues here and she’s letting that morph into some good old-fashioned animosity. 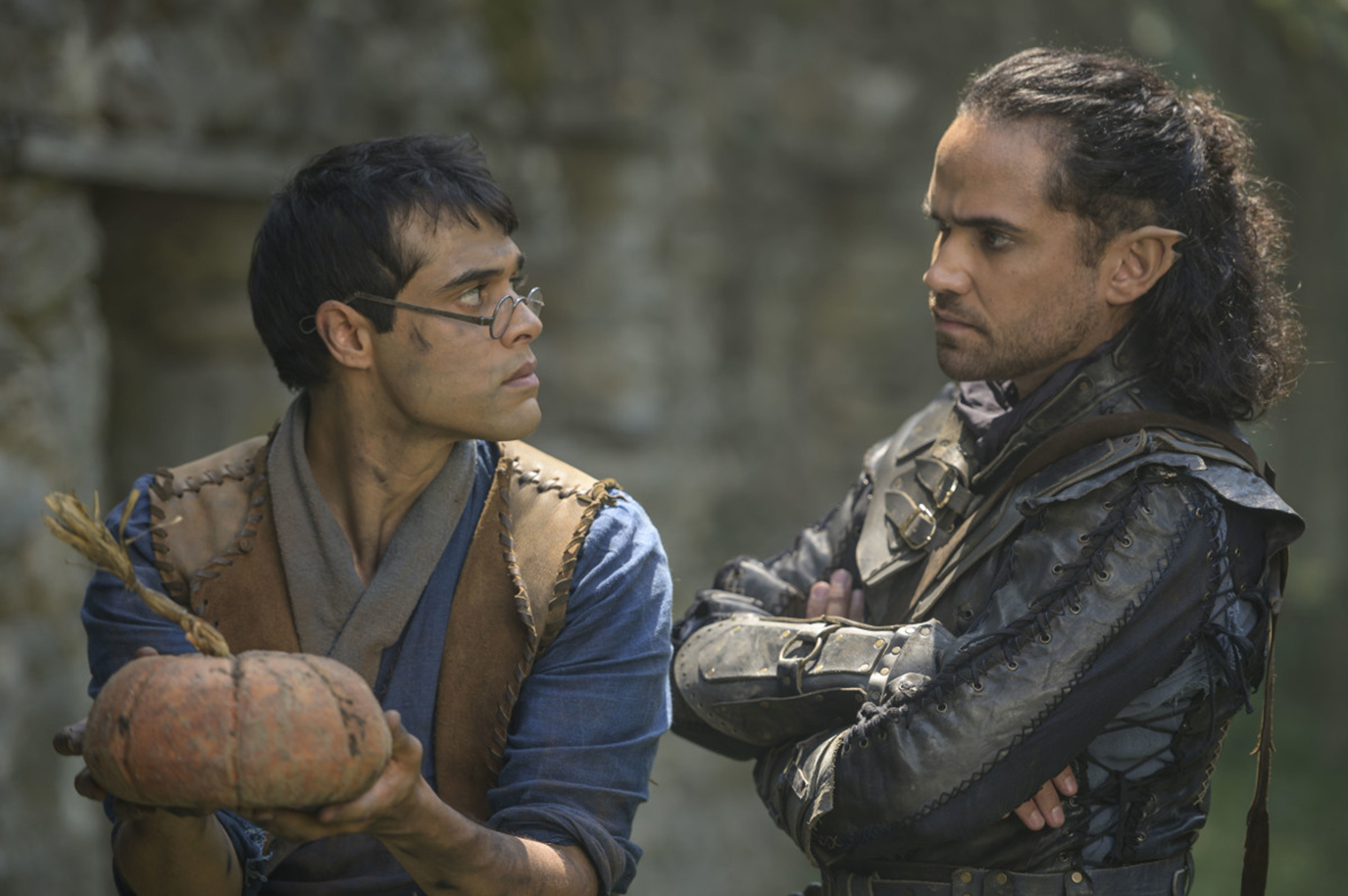 Bless his heart, Tobin is trying, but Gwynn is now officially beyond listening to reason, especially reason delivered by Tobin. I will say this, it has been good to see more of Aaron Fontaine the last two episodes. He was getting reduced to cameos or “man sitting in chair” or “man standing with horse.” I didn’t like it for a character I really enjoy. Last week, and then again this week, we got a little deeper dive into Tobin’s mental workings.

And then when Falista gets involved – wow! Look, I know there are a lot of fans that have taken to disliking Falista, but I think she’s a load of fun. She’s strong-willed, she’s a bit manipulative, and she supports her man, even though that support is often coming from a pushy self-interest place. She’s not just behind Tobin supporting him, she’s pushing him and pushing his buttons to get him activated into action that she has identified as what is needed. There is a great moment in this episode where Tobin kind of has it out with her and makes it clear that the manipulation and politicking for him are not what he wants.

He longs to accomplish things – make his mark – through his own deeds. He doesn’t want her to arrange things or, as he says, “manage” him. I thought it a great moment and one that Tobin needed to finally make clear, and one that Falista needed to hear. It will be interesting to see what this relationship becomes moving forward. 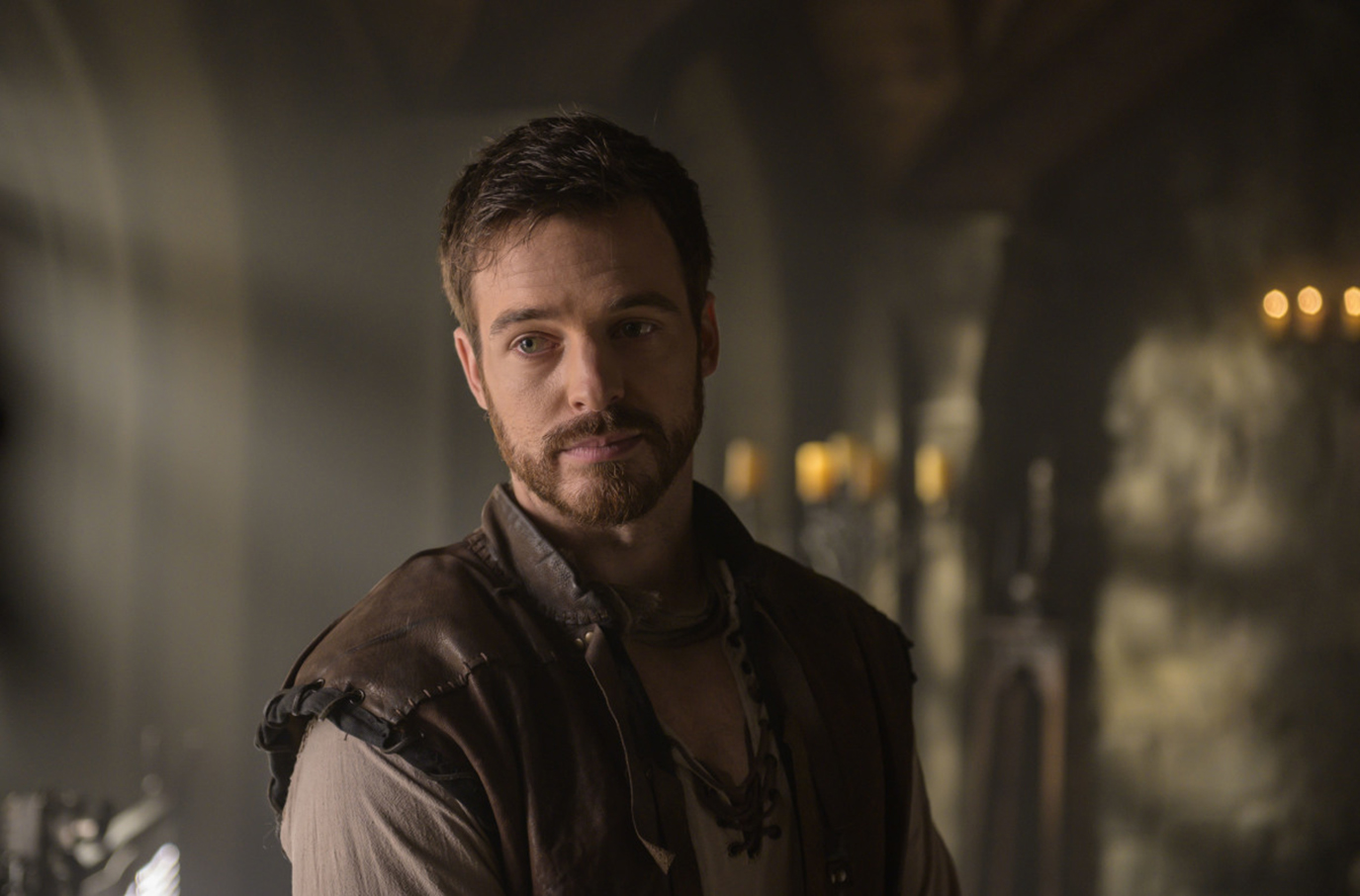 The impetus for this was Gwynn and Falista having a little chat. It was like two hungry predators circling each other, looking for vulnerabilities, and offering some nice little verbal shots in the process. Falista wants Gwynn to name Tobin her top advisor, Gwynn wants Falista to fall off a cliff. Again, Falista is trying to apply leverage to someone who simply won’t be leveraged. It appears that Falista may have made some valid points, but Gwynn throws a curveball at Falista and Tobin by shockingly naming Garret to that post in one of the episode’s final scenes.

Garret, to his credit, is shocked. He had no inkling that was coming. Falista and Tobin are shocked, and I think Gwynn may have been shocked a tad. Still, Garret Spear is an intriguing addition to the court and one that I think will help with his healing process. I’m curious to know how Talon will feel about all of this, but at first blush, after the shock of it, there is some sense to it. A good friend, a trusted ally, a man of honor, and far smarter than I think Garret gives himself credit for.

But one has to wonder how Tobin and Falista will react. I’m pretty sure Falista thought she had it in the bag, perhaps Tobin, too, but Gwynn, in another reminder of her growth as a character, make the decision that make sthe most sense to her – not to others. Gwynn has come a long way and let’s be honest, there’s been a lot of struggle and pain for her. But Falista and Tobin may decide that their paths lead elsewhere, though with Yavalla raising the banner for war with the Outpost, that path may be a ways in the future. Now, what about Munt? The big guy needs to be saved. Get on it, folks.