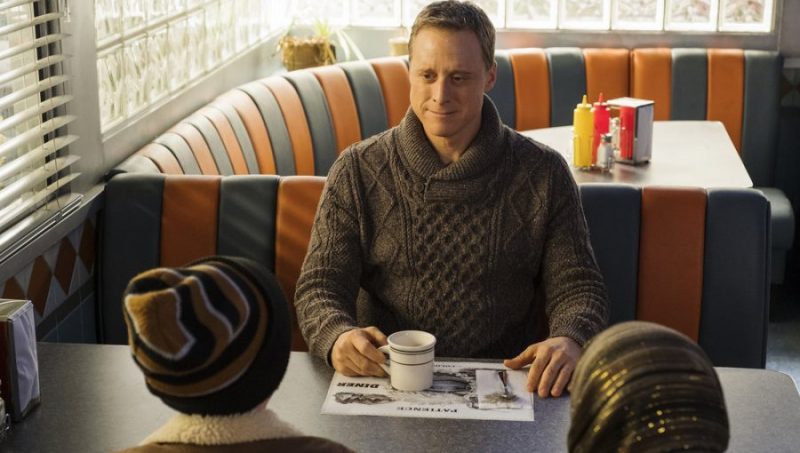 Resident Alien: A Truce, A Marriage, And A Fun Little Interview – Review, Ep. 105

Have we reached a turning point in episode 105 (“Love Language”) of Resident Alien? On the verge of divorce, have Harry and his wife made amends (she thinks so)? In the midst of their battle for supremacy of Patience, Colorado, youngsters Max and Sahar negotiate a peace with the alien and then indulge in some question and answers with their new “friend.” And Sheriff Mike Thompson positively giggles with glee when the toxicology report confirms that Sam Hodges was poisoned, which means there’s a murder on his hands.

Oh, and Jay discovers that Asta’s her mother while D’Arcy seems to be spiraling down the toilet a bit. I find that disappointing given I really like the D’Arcy character. So yes, in my world, episode 105 of Resident Alien took us to some fun, silly and sad places as the show really seems to be hitting its stride. And I positively adore Elvy Yost as Harry’s wife, Isabelle. Her drinking scene with D’Arcy at the bar was a subtle delight. The fact they were talking about the same man and didn’t know it was both funny and a bit sad – particularly for D’Arcy. 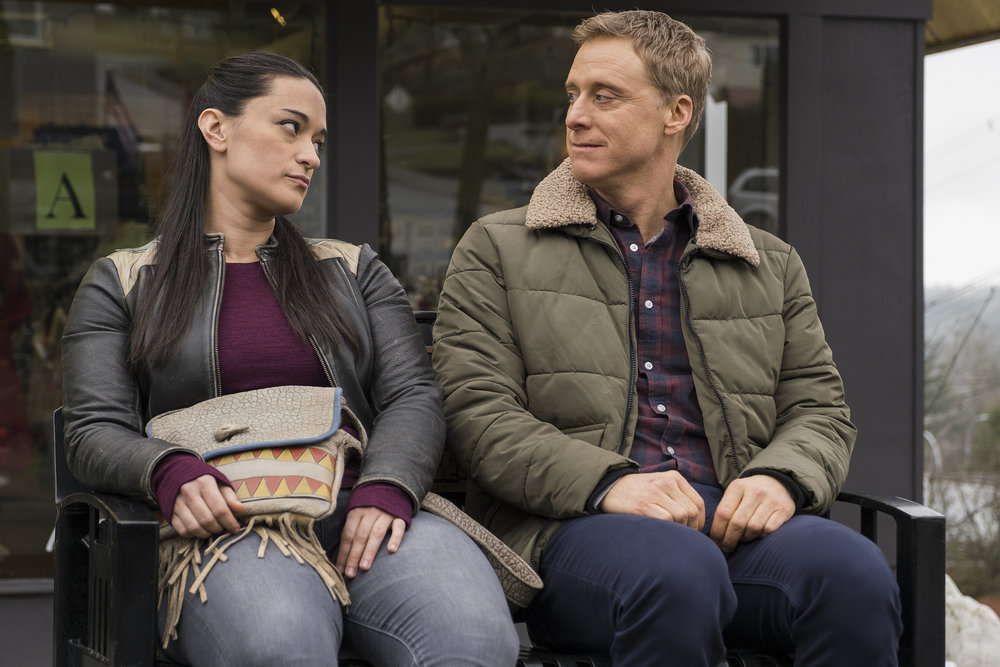 We also get an interesting little behind-the-scenes run about our good sheriff, who apparently moved to Patience with his father, a man that seems to be struggling to find positive things to say about his son. Yes, it appears there’s a reason our good sheriff yearns for the action and adventure of an action-packed crime spree – he’s felt the adrenaline rush of these types of cases before somewhere else and it didn’t end well for him. For all his bluster, it appears the sheriff is in Patience to escape something from his past – and find a positive word from his father.

Speaking of past, it would appear that the real Harry Vanderspiegle – you know, the guy in the freezer – may have gotten into a little trouble back home, which would explain his extended foray into the forests, where he was apparently running away from an impending divorce. One thing I really enjoyed in this episode was the backstory on Harry’s marriage, which seemed to have a magical quality to it. What happened? Why the divorce and seeming escape to solitude? That little arc raised a bushel of questions in my mind.

There’s so much more to this show than simply the laughs. There is a wonderful little balancing act going on between comedy and drama and I really like the way the show moves from one to the other, sometimes in the blink of an eye. It gives you insight into who these characters are, but more importantly, a little bit of a look into how they got to the here and now. And that isn’t always pretty or comfortable, which I think elevates Resident Alien on a couple of levels. 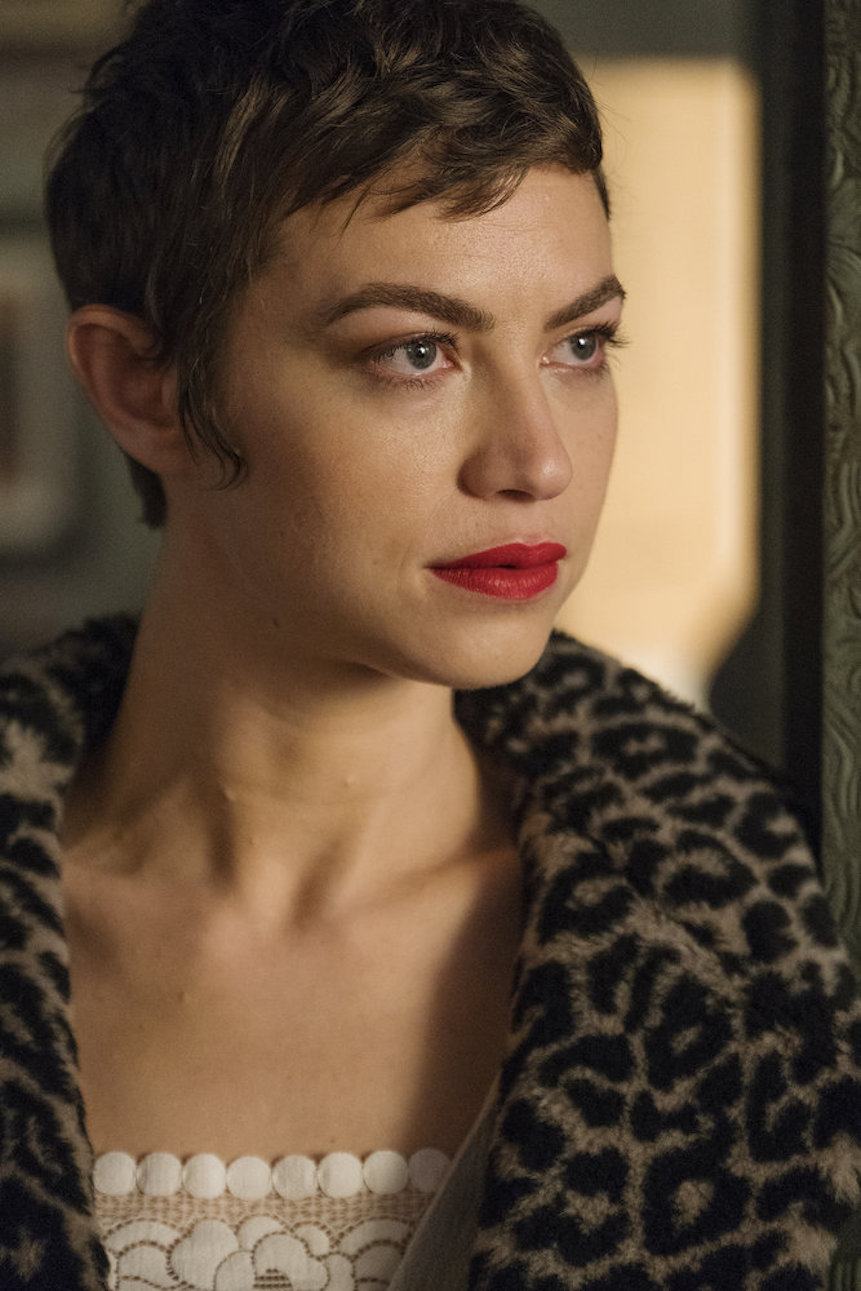 As always, the Max vs. Alien arc is a joy to behold as Max, and now Sahar, engage in a battle of wits with Harry in a game he should win easily. But he doesn’t and in the end he’s backed into a corner that allows for a truce between the two factions. And in a voice-over he admits that the kid he wanted to kill minutes before he now finds less bothersome. It should be very, very interesting to see how this new dynamic works and what Harry drags the kids into moving ahead.

That’s a quick little run through this episode, one I enjoyed profoundly. But, I’ve got another little thing I want to share with you in regards to Resident Alien. I recently took part in an NBC/SYFY virtual press junket where I got the chance to interact with a couple of people deeply rooted in this fun, interesting sci-fi drama.

Resident Alien: Showrunner Chris Sheridan and actress Sara Tonko, who plays Asta Twelvetrees in this new show, were on hand to talk about their inspirations and where the show, which is adapted from a Dark Horse comic book, is headed. 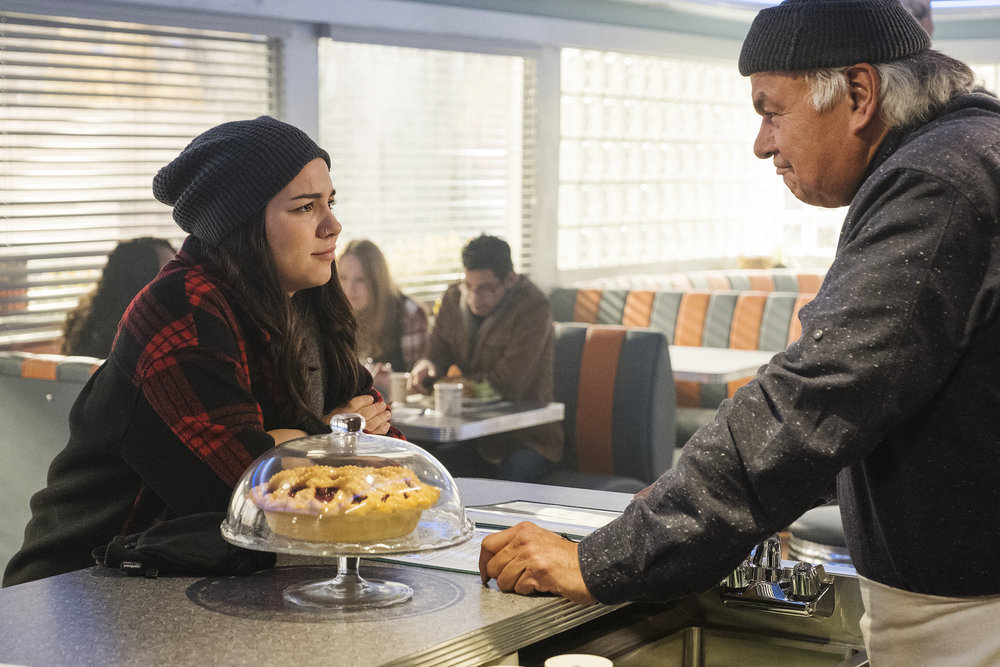 “I was first attracted to this script because of the writing,” explained Tomko, who called the work stellar and was fascinated by the tonal shift between comedy and drama that permeates the show. “I feel I understand her (Asta’s) honesty, vulnerability and lack of trust. I was very intrigued and pretty easily able to plug myself into her based on some of my own life experiences at the time.”

For his part, Sheridan said he had hoped to get as much of each actor and actress fitted into their roles. He noted that for a character like Asta, he had to add more background than was originally there – adding in the bad marriage and baby she gave up at 16. “I think Sara brought so much humanity to the role when she came in,” Sheridan said. “I really wanted the audience to fall in love with her and care for her. There’s not an inauthentic moment for Sara on the show, I’ve never seen someone sink so well into a role on a show. She never misses a beat.”

Tomko said that one of the interesting aspects of the show is that Alan Tudyk, who plays the alien Harry Vanderspiegle, was actually cast last. Who is Harry? she said the rest of the cast kept asking. Tomko said that Sheridan’s handling of the cast was “warm and welcoming” and he’d often ask what the actors thought about their characters. 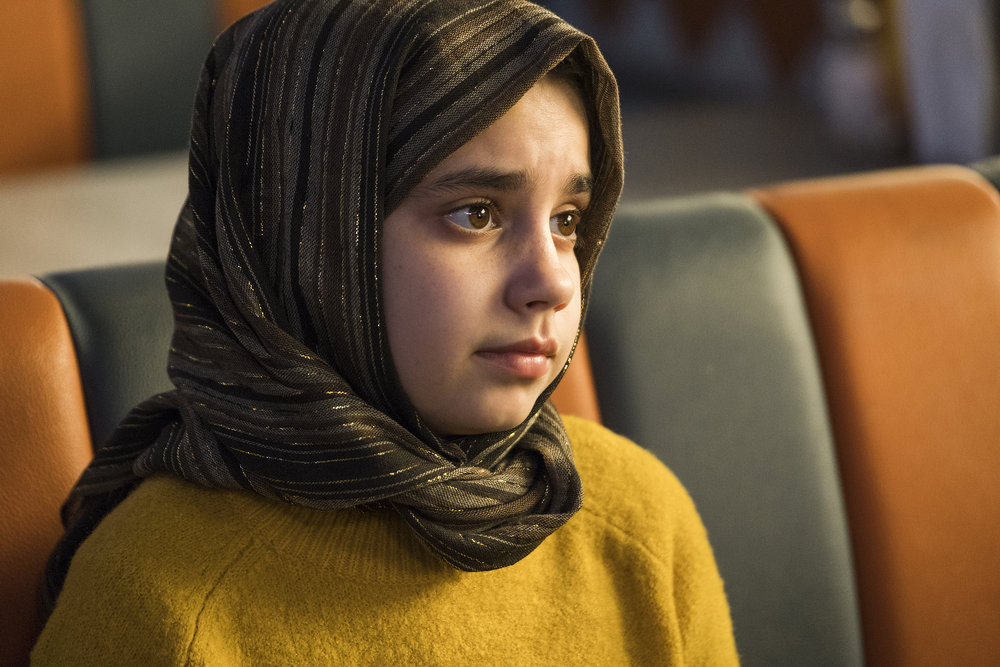 “It is so lovely to have someone you work for ask ‘What do you think?’” she said. “That helped me adapt and filter into her. There are a lot of similarities (with Asta), so it wasn’t hard. We did a lot of discussing about the scenes and how do I feel. I was able to show up for work pretty mentally prepared for what was going to happen. Always, the ‘X’ factor is Alan improvising the scene. But it was so wonderful to feel like I could show up and click into those jeans and click right into Asta.”

While Resident Alien is a show about an alien stranded on earth and his slow march toward understanding a species he’s been sent to destroy, Sheridan said that’s only part of the Resident Alien DNA.

“One of the things I did in developing the show – a lot of sci-fi is alien-centric – an alien coming down and learning about humanity,” explained Sheridan, who said he wanted the characters to be three-dimensional from the outset. “Even if there were no alien involved (in this show), the show would still be interesting. I think that’s what separates it from a lot of alien or sci-fi shows. I approached it to make it as three-dimensional as possible and relatable to an audience that may not be a sci-fi audience. This could be an immigrant story, someone just got off the bus (from somewhere else) and is trying to fit into this world.” 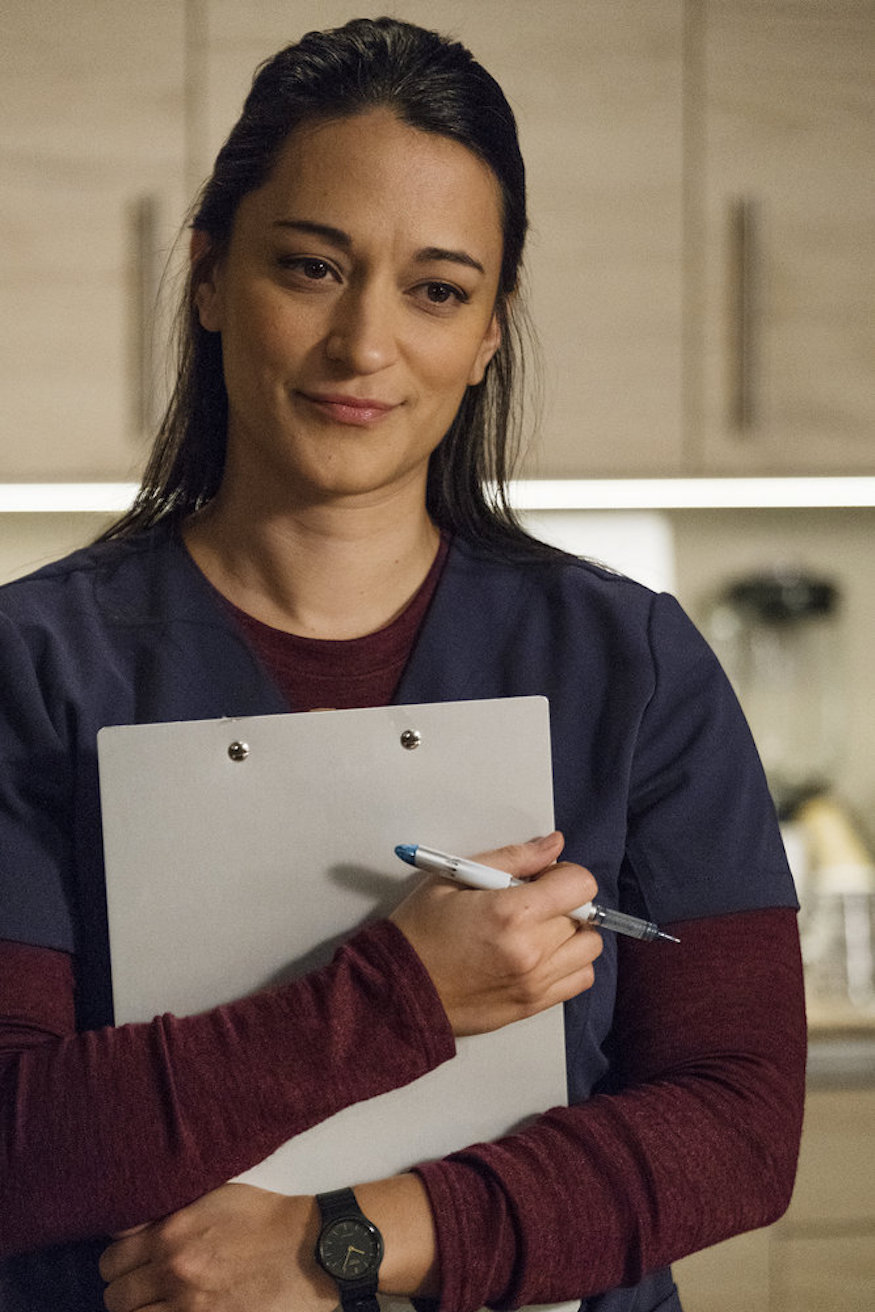 Both said that working with Tudyk has been a rich experience and that watching him develop Harry through the first season was a delight. “It has been interesting to see him growing throughout the process,” said Sheridan. “One of the keys to the show is that he doesn’t get it (humanity) right. That’s part of the fun of the show. I think a lot of the dance of the show is watching Alan Tudyk play this character.”

Sheridan noted that as the season moves forward, there is a change that is coming over Harry as he’s further exposed to humanity. At first, he faked the emotional part of humans because it was a survival technique, but as the show continues on, he gets these emotions legitimately because “he wants to fit in,” said Sheridan.