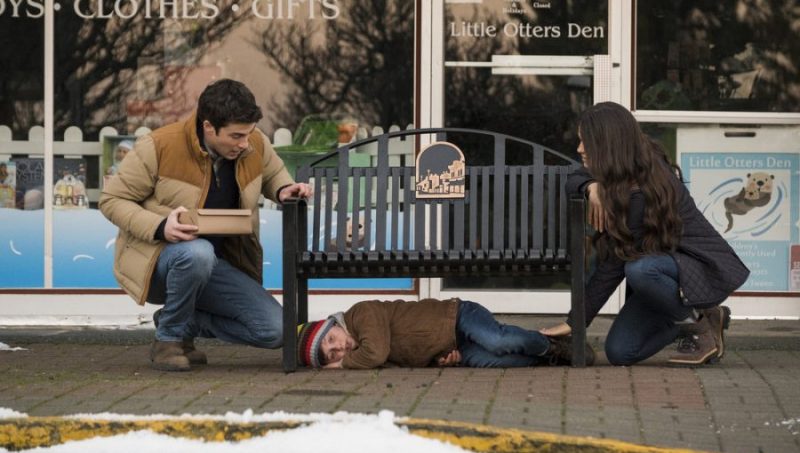 Hidden behind the falling off of chairs, toothpaste smeared across the face, and a wonderful non-verbal bit about eating a French fry, there was something else lurking under the surface of Episode 102 of ” Resident Alien.” It’s easy to see some of the physical humor that Alan Tudyk delivers and dismiss the show as simply filled with prat-falls and well-timed laugh moments, but that’s shorting this show a bit, in my opinion.

The series’ second show was entitled “Homesick” and woven between the jokes and physical comedy moments were some interesting statements about home and how, even when we don’t want to feel it, homesickness arrives in many different ways. Tudyk’s molecularly created Harry Vanderspiegle notices this early on in the episode when he describes a hole he feels inside. He laments that for some reason, having taken on human form, he is starting to encounter the emotions of humans, something that throws him for a loop. 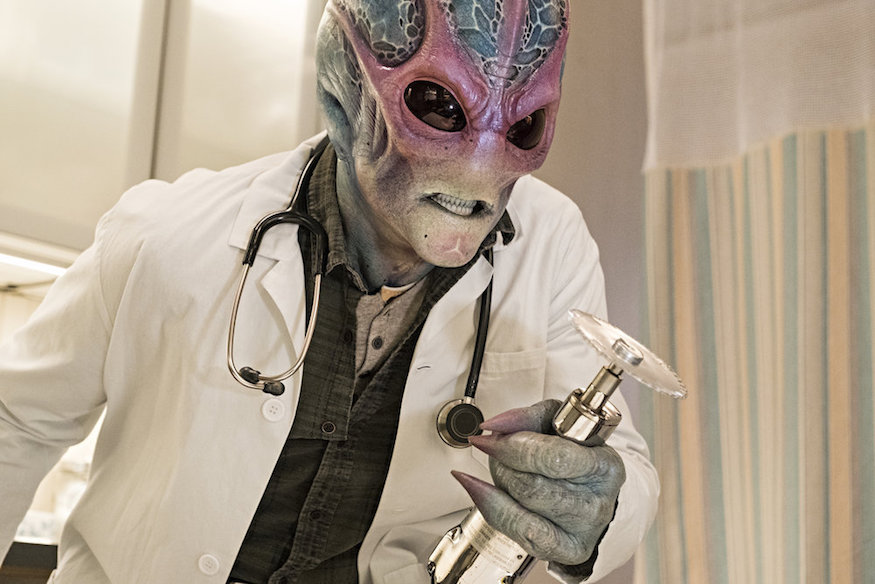 It’s an interesting dynamic for him as he continues the charade of being a doctor in this small Colorado community. There are some absolutely hilarious moments with him in the exam room – “Okay, let’s see that tit” he says to the astonishment of his female patient and the horror of his assistant Asta Twelvetrees. There’s a running theme through the series thus far that Harry considers his species superior in every way to humanity, yet he finds fitting in to be a struggle from one minute to the next.

For instance, he wonders why humans think heart attack is the leading cause of death among them when his species knows that it’s actually almonds. In a funny moment at the bowling alley, he calculates the geometry of the ball to the pins and assumes he’ll be able to master it easily, particularly after Sheriff Mike and D’Arcy open with strikes.

Instead, he finds out that what appears to be a simplistic game played by humans carries with it some very real struggles. And that struggle leads to the bowling ball flying out his hands backwards and nailing Sheriff Mike in the jewels – which D’Arcy finds hilarious. 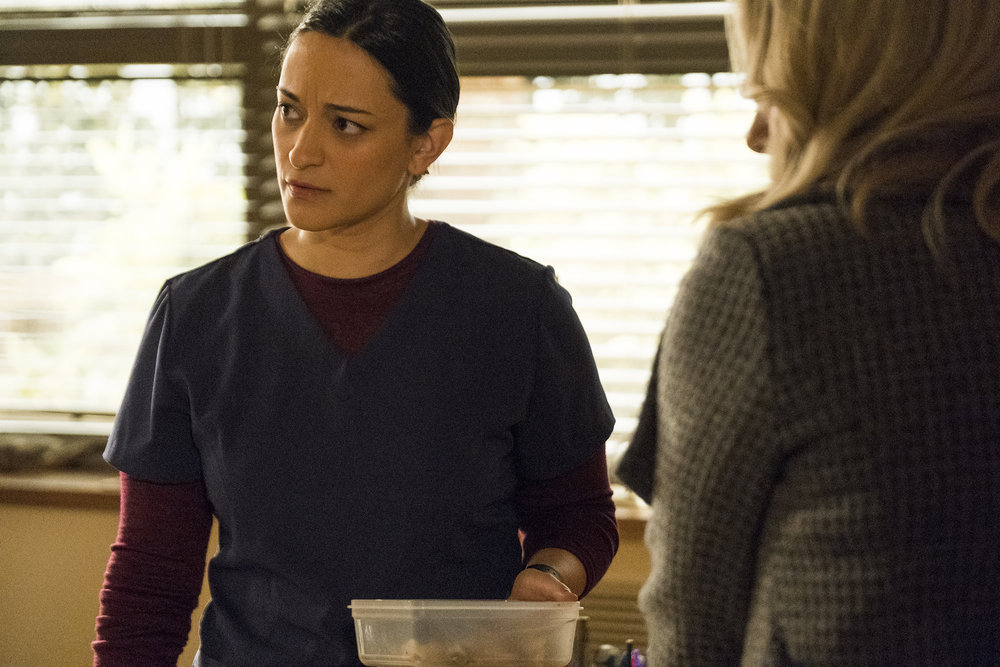 As an aside, Sheriff Mike Thompson is a riot. You can tell he’s set up to be a hard-nosed, fairly conservative, semi-bully type of guy who thinks he has all the answers. His color coordinated bowling outfit reminded me of Jesus in “The Big Lebowski.” And the good sheriff doesn’t just wear it, he wears the hell out of it and he knows it. But one has to wonder what that confidence and bravado may be covering up.

Back to Harry and the hole in his middle. He can’t figure it out or why he should feel anything. Then, in a cave he finds a mineral that he’s familiar with and through fire and ice, builds a piece of home that allows him to levitate and apple. It’s a small moment, but a moment that reflects his own homesickness, his own desire to complete his mission – the mass extermination of life on Earth – and go home. And it’s one of those moments that elevates Resident Alien above a simple comedy. 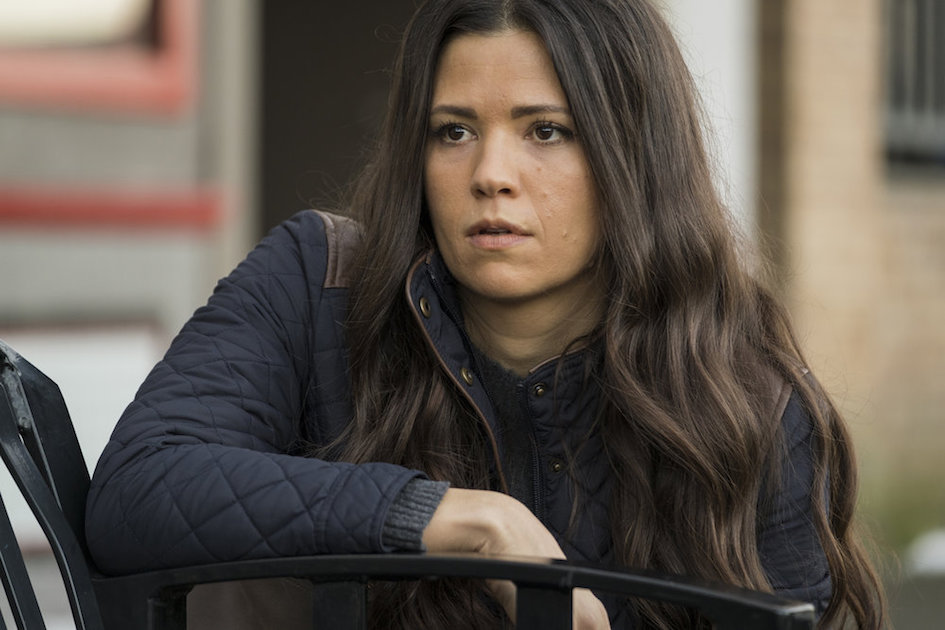 Asta has her own bit of home therapy as well. The loss of Dr. Sam Hodges was more than the death of a colleague at the clinic, but a trusted and valuable friend to Asta, one who was there when she was so in need of one. We learn that Dan isn’t really her father and that her mother took off when she was young. In the midst of all that familial struggle, and her own teenage impulses, it was Dr. Sam that stepped into the breech and provided that family environment.

And she’s finding it difficult to deal with. That’s when “Dad,” Dan Twelvetrees, offers some advice based on Native American rituals to help “release” the doctor’s spirit. She balks at first, even wondering if Dan finally wants to be a father to her. But as time marches on that night, she takes out a box and, with the help of Dan, performs a hair-cutting ritual. 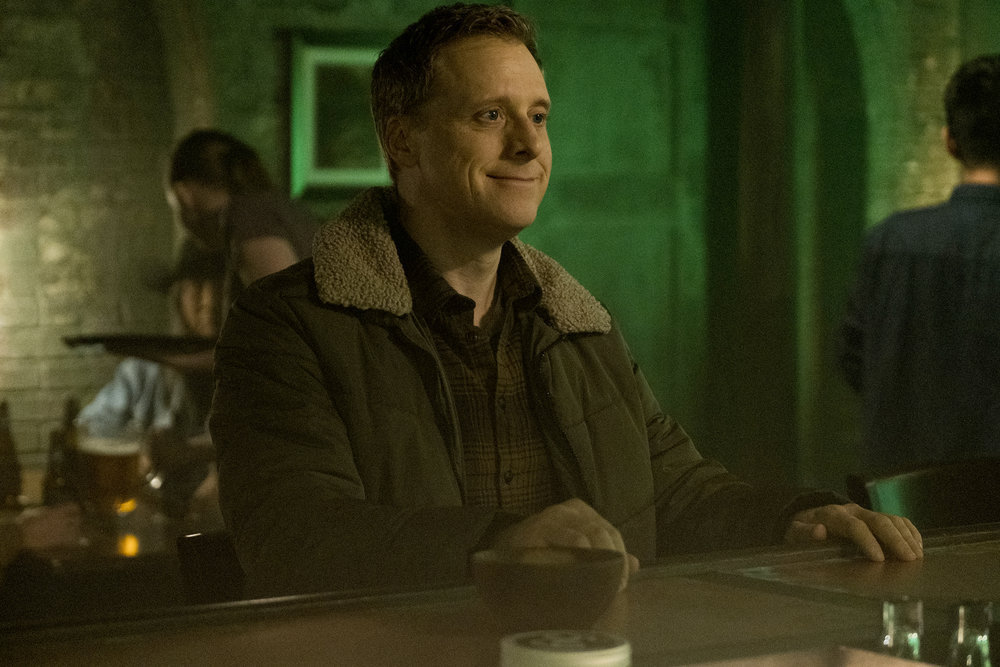 She will later burn that hair and the scrubs she was wearing the night Sam was murdered. It’s nice to see some Native American sensibilities added to Resident Alien. It’s a part of culture that we don’t see represented very often or very well, but here, in this sci-fi comedy, we have a nice little touch of it, which again pushes Resident Alien up an notch or two from the basic comedy.

And with her ritual, Asta starts to let go of Dr. Sam. She tells Harry that Sam’s office is now his office. The two are forming a bond and, as we talked about earlier, Harry is having strange feelings that he can’t quite explain, even offering to play cards with Asta – not because he wants to, but because he can tell she’s sad. it’s an interesting conundrum that Harry is starting to find himself in – a mission to destroy a humanity that he’s starting to more fully understand. 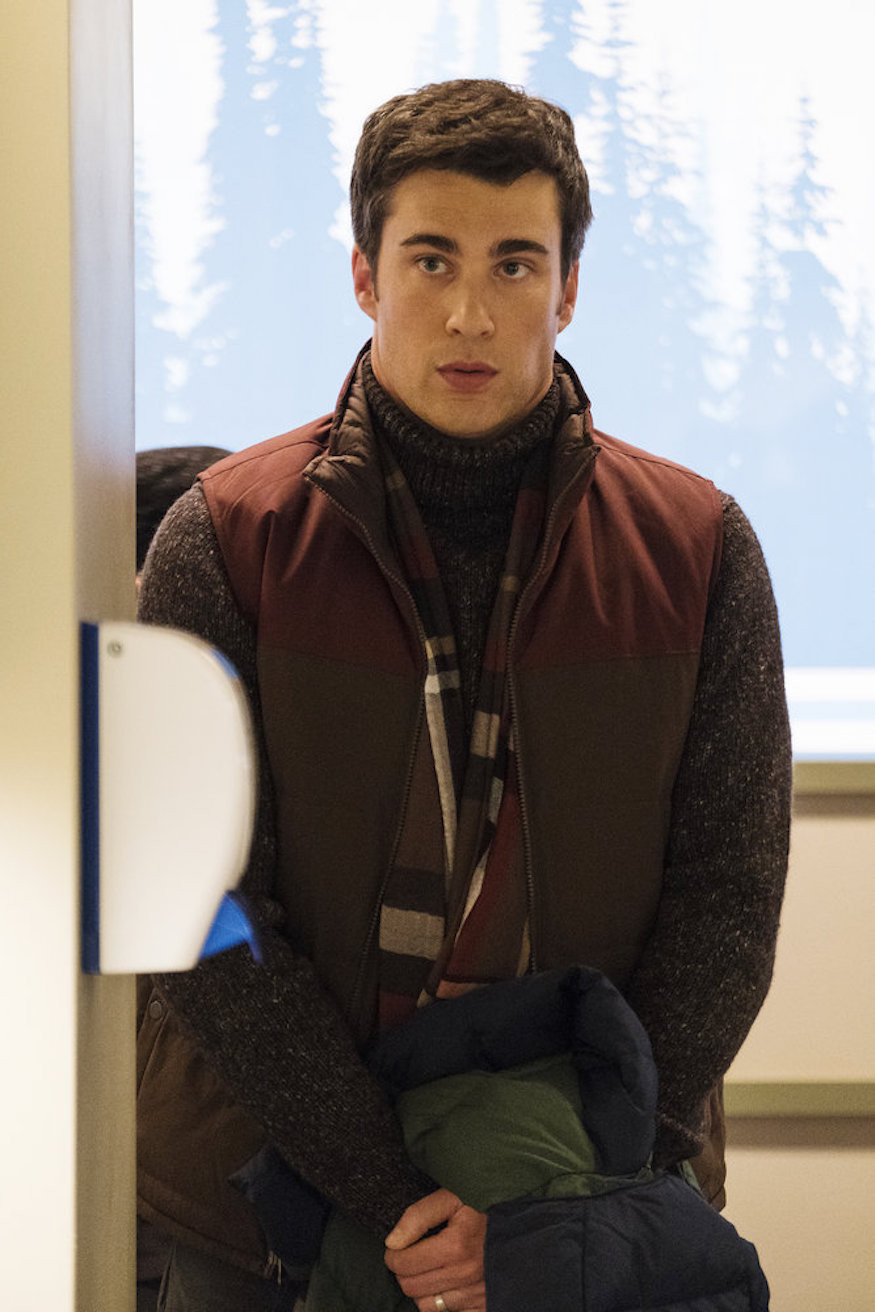 One of the running arcs of this show that I can tell is going to be fun is that Harry now has a full-fledged nemesis in the kid Max, who can see through his molecular disguise. Max is trying to get people to believe him that there’s an alien amongst them, while Harry is working through plots to eliminate the kid. And as such, discovering that Max is more than a match for his malicious machinations. 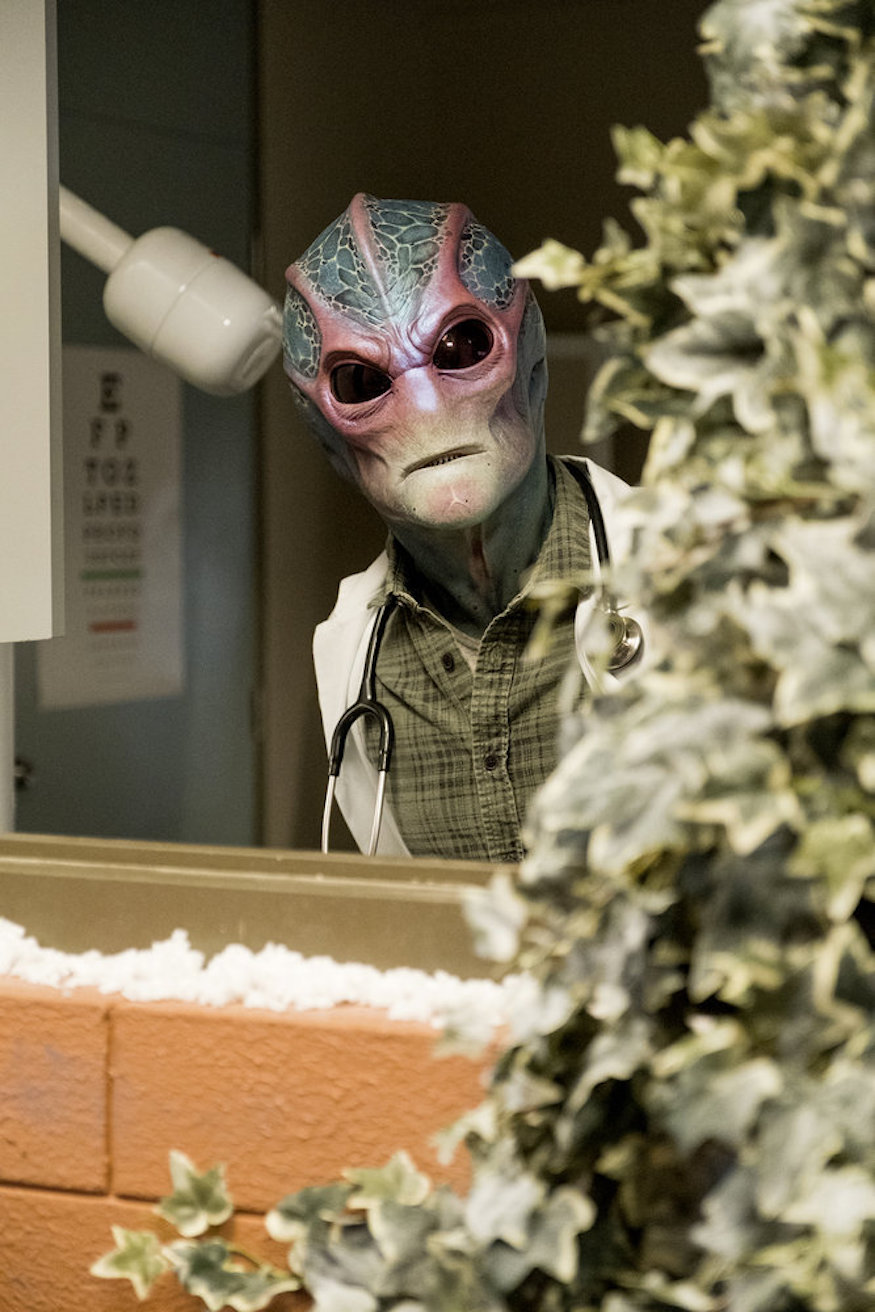 Episode 102 offered a little deeper glimpse into some of the characters of Resident Alien, as well as some nice verbal and physical humor. I think that mixed together, there’s an interesting feel to this show, one that I suspect is going to get better and more involved as we move along. Yes, it’s a comedy wrapped in sci-fi packaging, but there’s a little more there and in episode 102 we got a glimpse under the wrapping.

Patience, Colorado is a quiet little town with a murder to solve, but it feels like it’s potential for storytelling is much bigger than that. I’m looking forward to seeing how that story unfolds.