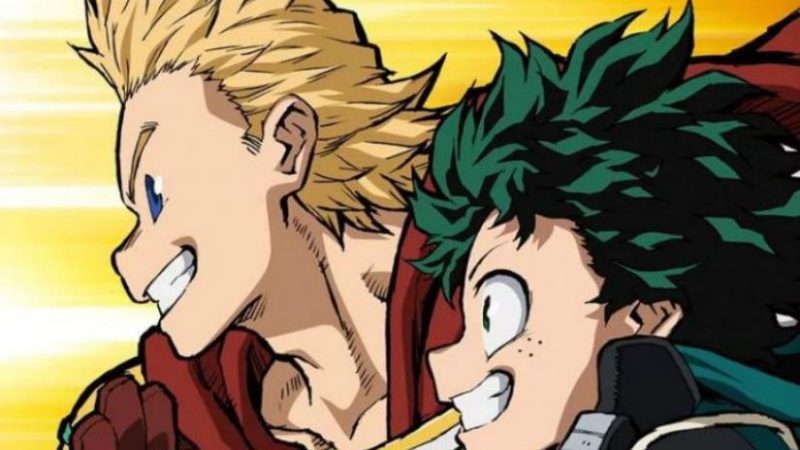 My Hero Academia Top Moments: A Look At Our Top 4 Moments From 4 Seasons

From the moment My Hero Academia came on the stage as a manga, and shortly thereafter an anime, it has been on fire. The series follows young Izuku Midorya on a quest to become the #1 hero. Part slice of life, school life and superhero genre, My Hero has a lot to love. A huge cast of characters, and well-developed storylines for most, making you want to learn more about people other than your main cast. Now the series is getting ready to enter its fifth season of anime.

So we decided let’s look back at our top moments from each of the four seasons of the show. What are your top picks from each season? Sound off in the comments below!

Season 1 was just 13 episodes and we were just learning about our students in class 1-A. However, that didn’t stop things from getting crazy fast. During a training exercise at a training ground known as the U.S.J., Villians ambush the students in hopes of finding and crushing All Might. It was here that Deku got to first use his power in a real meaningful way since training up with All Might. His team-ups with Tsuyu and Mineta proved to be a great show of his strategic thinking skills under pressure.

But more than that was his display of courage defending All Might against the Nomu, which caught his other classmates, including his childhood friend Bakugo off guard with his speed. However, what Deku didn’t know at the time, was this would put him squarely on the radar of the Leauge of Villians and Tomura.

Izuku knows he cannot grow alone. And he also finds himself meddling in things that are not his to mess with. But as All Might famously told him, that is the essence of a true hero. This never rang more true than with Shoto. They have not been friends, let alone classmates much up to this point, with Shoto not sure what to make of Izuku yet. But after being confronted before their match Izuku gets an idea of what’s going on in his head, and he doesn’t stop messing with it there.

Throughout the sports festival arc, more and more layers of each character are revealed beyond just our main cast. Todoroki’s evolution as a character was probably the most pronounced. His family life and his father’s rivalry with All Might made him and Deku unlikely friends. Shoto wanted nothing to do with his father or the fire quirk he inherited.

The fight between Shoto and Deku was insane. It has to be the best fight scene of any anime that season. The raw power the two of them showed during that fight was unimaginable. While the outcome might not have gone the way we wanted, we were happy with what ended up happening for both characters.

While Midoriya and the others are celebrating their new licenses, Bakugo approaches Midoriya to meet him at one of the battlegrounds after hours to talk. This leads to the next big battle between these two childhood friends. It’s funny though, calling them ‘friends’ is really difficult to justify. Yes they grew up together through middle school and now high school. They lived in the same area. But in reality there isn’t anything to suggest there was any kind of friendship there. Midoriya idolized and in many ways saw in Bakugo the same determination he had himself. Bakugo’s ego however swelled when his quirk manifested and Midoriya’s didn’t.

Now here we are at yet another fight. Bakugo is pissed off at Midoriya’s continued growth. And he has put the pieces together that what Midoriya has is All Might’s power. Though to be fair Midoriya has loose lips as he desperately tries to salvage what little communication the two have by trying to explain he wasn’t hiding a quirk all this time. This fight is the second time we see Bakugo’s ego crack. First, he is surprised by Midoriya’s sudden switch between his new shoot style and his original smash. But also Bakugo blames himself for All Might’s retirement.

I know the dub versus sub debate will never go away but this is the one time I have to say the dub is just as emotional, if not more, than the sub. We can disagree on this but I am standing my ground here. Clifford Chapin’s voice acting in this scene is nothing short of incredible. The reality is for all the bravado that Bakugo has, he is still a teenager. He wants so badly to be #1 and be like All Might. So badly he ignores any help or sense from anyone, especially Midoriya. Ultimately All Might steps in and explains everything and tries to calm Bakugo down. Now, this secret has one more in the circle.

My Hero Academia has some pretty incredible fight scenes and action sequences. It is hard to imagine they could one-up themselves, or even match the likes of ufotable when it comes to animation. But what many anime series miss, including My Hero Academia, is the nuance of scene. Beyond animation, the sound, score, and voice acting all play a vital role in bringing out the heart of a scene.

Queue season 4 of My Hero Academia and the long-awaited fight with Overhaul. For manga readers, they have been waiting over a year to see this animated. So much is expressed in the source material, the questions of how it gets expressed once animated loomed for many. However, once the episode finally aired, you couldn’t help but find yourself emotionally caught up in the scene. In this clip below, we see a very small but incredibly impactful part of the Deku versus Overhaul fight.

At its very core, this mission to save Eri dug deep into the center of what drives these characters, Izuku especially, to be a hero. After repeated failures to protect his childhood friend, not knowing what to do about a boy who hated heroes, and missing his initial chance to protect Eri, nothing was going to stand in Deku’s way. And the animators knew this in the way they handled the animation, the sound and the score for this scene below.

Movies like Star Wars: The Last Jedi proved to us that the art of sound editing can increase the impact of a scene immensely. So as we watch the clip above, all of the background noise is quieted, and a song begins. We have heard this song many times over the seasons. Yet, this one is sung much slower, and with more cinematic impact. Then listen to the emotion in the voice of the actor voicing Deku. Everything about this scene in the department of sound editing took Deku’s Full Cowling 100% and did a Plus Ultra supercharge.

As a fan of the series, or even as a new watcher, you can’t help but get a little emotional watching and listening. THIS is how you elevate an emotional scene. It doesn’t need to be more action, better animation or louder fights. Just simple, elegant sound editing and score choice.