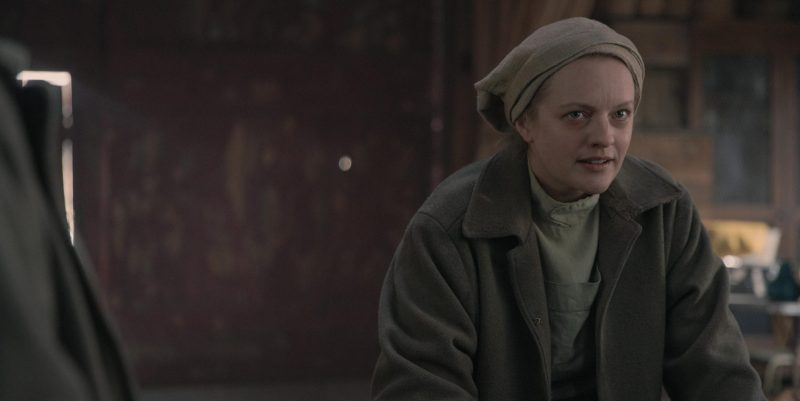 Handmaid’s Tale: Season 4 Starts with Bangs But No Whimpers

This season, the quiet part is said out loud on The Handmaid’s Tale. Season 4 started with a three-episode drop this week, and loyal viewers had their share of heart-dropping, stomach-churning moments, a ride that shows no sign of slowing down.

This review is obviously late. I’ve had screeners of the first several episodes for weeks, and I put off watching them, remembering that Season 2 put me such a tailspin that I had to stop writing about it for a while. I wasn’t sure how I would feel about this season. I’ve started and stopped writing about six times (and to be honest, we’re on vacation, and it’s hard to reconcile trying to do the vacation thing with the Handmaid’s thing). But these episodes were VERY intense, and they were a great lead-in to what promises to be a non-stop season. I told a couple of my friends – non-watchers, because they’re afraid (don’t you feel very brave for getting through this show?) – about the trouble I’ve been having putting this review together, and my friend Sam suggested I say only this – “I’ve been trying to put how this season’s episodes have affected me, but I’m struggling finding the right words. How about if each of you watches it and then comes and joins me huddled under a blanket on the floor of my closet as we discuss it.” So if we can find a nice closet, complete with wine and a bathroom… 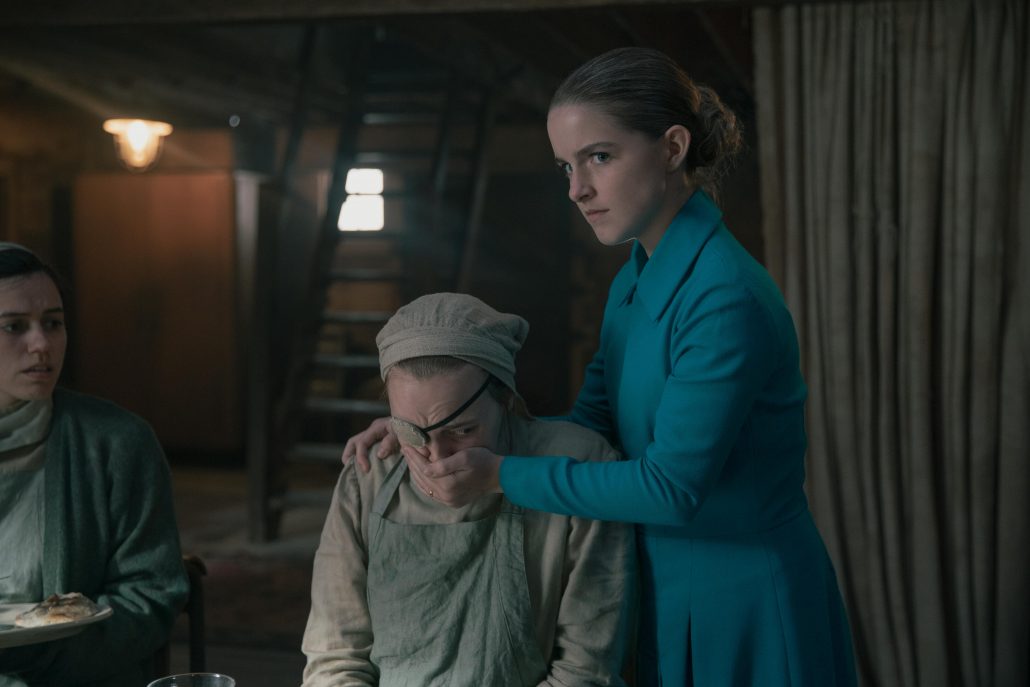 Having pulled off this audacious stunt of getting nearly a hundred children and some of the women out of Gilead, June and her fellow Handmaids are on the run. They’ve gotten as far as a farm in Pennsylvania. Yes, the very young Wife (McKenna Grace) is sympathetic – but the men around her have to be as well. Except for her husband, who has been slowly poisoned by young Mrs. Keyes. Some of this doesn’t make a lot of sense – dementia is not a symptom of nightshade poisoning, and if he’s as far gone as he seems to be, how is he arranging for all of these Guards, Eyes and Commanders to come and rape his wife? And why don’t the guards working on the farm stop them, if they’re so sympathetic to the Handmaids? But they have to go somewhere, and here at least for a while, they have some respite. Janine seems to almost thrive wherever she is, and makes the best of a situation – she seems to be loving caring for the pigs! But Alma has a realistic, if defeated attitude – “maybe this is as free as we’re going to get.” You know it can’t last, though.

It was fascinating to look at these episodes from a psychological standpoint. The thin veneer of humanity that’s covered anyone who has embraced Gilead – or been eaten by it – is gone. How close are people to losing the care for their fellow man that is the only thing to keep society going? Apparently, closer than we want to believe our neighbors are capable of. Is redemption possible? Can we still see the spark of REAL divinity, and not the messed-up-DNA of the Frankenstein’s monster version? In Gilead, that spark has been driven far underground for many, and extinguished altogether, with no hope of rekindling, in others.

Who has gone farthest down? And who do we THINK might be redeemable? By far, for me, the scariest of this story arc’s lot was the torturer/confessor lieutenant, a character without any other name, played by award-winning Broadway actor Reed Birney. This is a man who has waited his whole life, I think, to shed his serpent skin and reveal himself as the Devil incarnate. Oh, if it wasn’t so repulsive it would be delicious. Speaking softly, genially, kindly, never raising his voice, smoothing June’s brow, he pushes those girls off the roof as easily as he blinks his hooded eyes.

He’s your friend, he’s only there to help, to do his work in the name of his perverted God. And he embodied the epitome of the Gilead commanders’ ambition – publicly, they would admire his success and say they deplore his methods, all the while giving him silent attaboys. Even Aunt Lydia, who has lost her own tenuous grasp of pre-Gilead humanity, recognizes that this is abhorrent, but she has no control in the situation. If you ever come across him – at a grocery store, a theater – his lack of a soul will be glowingly obvious.

Of course, this isn’t the first time we’ve seen how the show’s writers have given us man at its worst, and that’s what scares me the most about this show – how close we come to this. Nick walks on the edge – was he at all redeemed by loving June? Does he really love her, a subject that came up more than once in these three episodes? Or does he see the hope of redemption in her? Is he sympathetic to Mayday, or a true Gilead believer? June was warned that Nick has a dangerous history, one we know nothing about. He DID help her and their child attempt to escape (not his fault she couldn’t leave Hannah), but showed no compassion for the plight of any other Handmaid.

Max Minghella has done a great job trying to convince the viewer that he’s a regular guy caught up in all of this, too far in to get out, but all with a wink wink, and a hey, I’m secretly loving this commander life. Nick truly has had enough opportunities to do more for Handmaids than he’s done, and honestly, the only things he has done have been on June’s behalf. So we have to believe that his interest in helping is very narrow – unless there’s a major plot twist and we find out eventually that he’s actually directing Mayday behind the scenes? Really though, any of you fall for that? Me either.

The women aren’t exempt from this. June is certainly not all there. There’s a weird, empty look in her eyes (Elizabeth Moss is a hell of an actress, despite the strange June-face closeups), and I don’t think she’s been completely sane since she had that mental break during her pregnancy with Nicole. Understandably, she has a need for revenge, and living at the Keyes farm, learning what she has about this abused young Commander’s wife, she has some outlet for that need. I know there’s been a lot of discussion about how she can get away with everything she’s done, and not end up on the wall – but this isn’t a documentary, it’s fiction, and we need someone to focus on and see the story through. It’s the same argument we have with another show I review, Outlander – can’t they get a break and just have some quiet happy time? And where’s the story in that?? 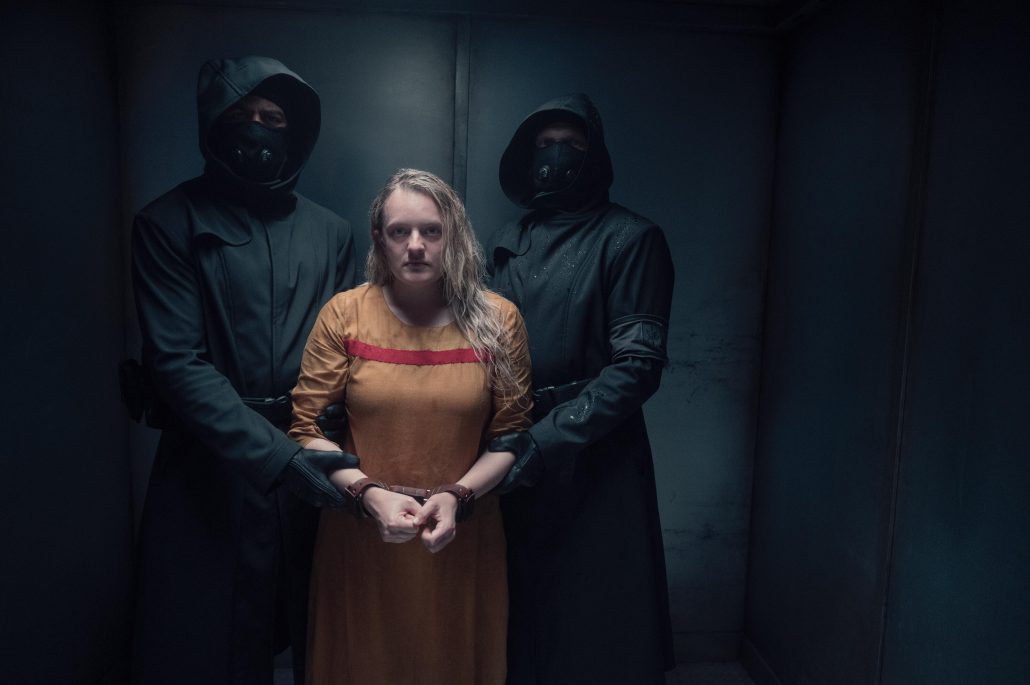 That blank look in June’s eyes just got worse and worse, didn’t it! She had flashes of sanity, because she had to – the other Handmaids looked to her to protect them, as they always have, and she takes that responsibility seriously. That’s what weighs on her the most after she’s captured. I cheered when she told Lydia, “there’s no meaning in this place except violence. You told those girls that if they followed the rules, they’d be ok. Then you sent them out to be beaten and raped, and humiliated, over and over again. You failed them. You failed your precious girls, so this is your fault, Lydia. It is YOUR fault, isn’t it.” The look on Lydia’s face was a mixture of disbelief – how can June talk to her this way? – mixed with possibly a touch of guilt – is this how they saw it? rape and humiliation? and I did that to them?

And it only gets worse for June – she’s had the high point, the courage to tell Lydia what she really thinks, but then she’s punished for it, and for her commitment to taking care of the other Handmaids (and Mrs. Keyes). She watches in horror as Lt. Satan pushes two girls off the building roof as easily as breathing. She endures, barely, being locked in a sensory deprivation box. And she faces Commander Lawrence, who tries, as gently as he can, to get her to face the seriousness of what’s happening. When he tells her that what comes next will be something he knows she can’t handle, that Hannah will be the next victim if June won’t give up the Handmaids’ location, she can’t believe that Gilead would ever hurt a child, because she can only see that this is Gilead’s main concern.

Of course, it isn’t, and from a viewer perspective, we’ve been able to see that, but at June’s vantage point on the lowest point, that’s all she knows. “Gilead doesn’t care about children. They care about power. Faithfulness, old-time values, home-baked bread… that’s just the means to the end. Window dressing. I thought you would have figured that out by now.” This is an eye-opener for June, and she knows, finally, that this is a fight she won’t win, no matter how stubborn she is. And in the end, because her child IS the most important thing to her, she has to give in. 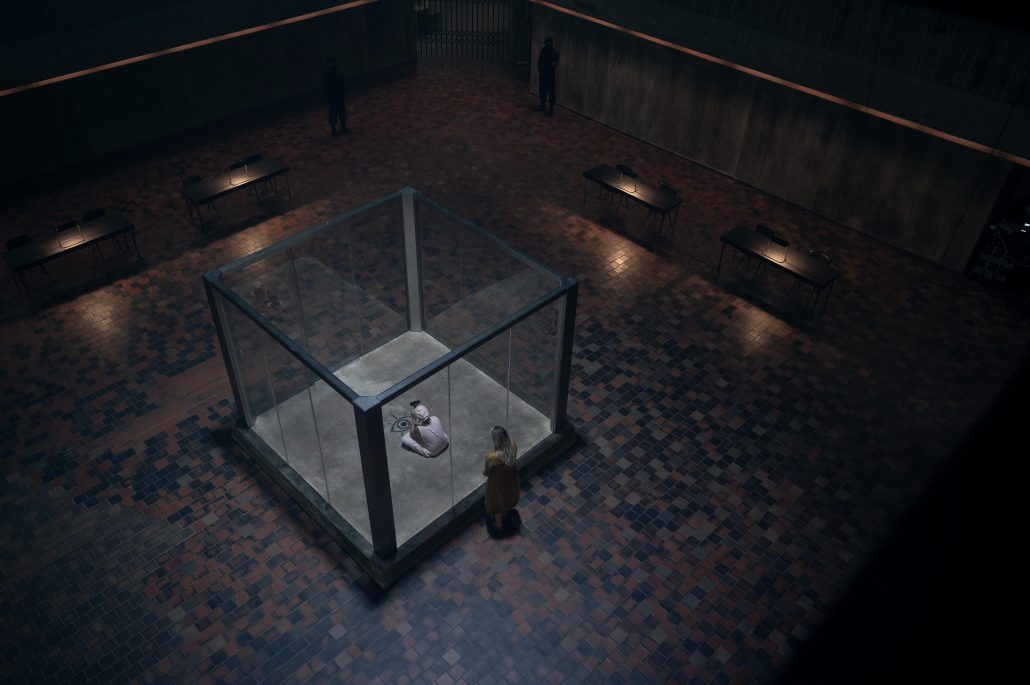 The “Magdalen colony” the girls are supposed to be going to could either be hell or, well, purgatory, I suppose, depending on who is running it and how cruel they are. But still, there would be no escape from the “blessed cycle of service,” as Lydia puts it. And she throws back June’s taunts at her – “Try to remember that this is all your doing. All of it, your responsibility. Your fault. Your choice.” June has always felt the weight of the carnage that has surrounded her, and I can’t imagine how she sees herself ever pulling it together again.

The last few minutes June has with Nick are a little unbelievable (“little???”). With two masked guards watching, Commander Nick and heretic/prisoner June kiss passionately? It’s not like they were hidden. Can this come back and bite Nick? Does he care? For June, she believes it to be the last bit of normal she may ever have, the last bit of affection, the last real feeling, before she has to shut all of that in a box as small and as tight as the one she was locked in. Does Nick mean any of it? 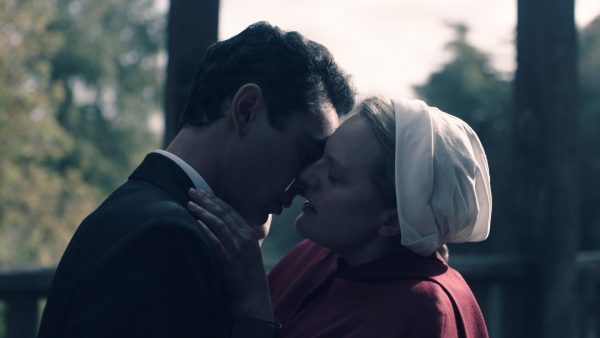 I can’t help but wonder if the van driver was sympathetic to the girls, and left the van deliberately, hoping they would take advantage of his absence and do just what they did. Their mistake was to leave Lydia alive, but they really had no time to do otherwise. And then when their escape was discovered, sympathetic or not, to keep his own skin, he had to shoot since Lydia was still there to see how he behaved. How many of you screamed, like I did, when the train hit the girls? I had to stop the video, take a minute – the brutality isn’t just on the Handmaids, it’s on the viewers as well. And it’s so well done… no fairy tale endings, no Prince Charming or fairy godmother rescuing them in the end. Death is the only way out for most of those women, and it comes suddenly and brutally.

Let’s save Canada and what’s happening there for next week, ok?