Legends collide in “Godzilla vs. Kong” as these mythic adversaries meet in a spectacular battle for the ages, with the fate of the world hanging in the balance. Kong and his protectors undertake a perilous journey to find his true home, and with them is Jia, a young orphaned girl with whom he has formed a unique and powerful bond. But they unexpectedly find themselves in the path of an enraged Godzilla, cutting a swath of destruction across the globe. The initial confrontation between the two Titans—instigated by unseen forces—is only the beginning of the mystery that lies deep within the core of the Earth.

As one might expect from the title, Godzilla vs Kong brings together our two Titan’s for the first time in the current franchise reboot. With them also come their human counterparts from the previous films. We spend a great deal of time revisiting Kong and his current condition, which is falling apart. Ever since Gozilla became the reigning Alpha Titan, Kong was kept in a containment dome to prevent Godzilla from finding him. Their rivalry is one that goes way back and only one Alpha can be King, or so the story goes. But we quickly learn Gozilla is on the warpath again, but why? Sounds familiar right? Is he the villain or isn’t he? 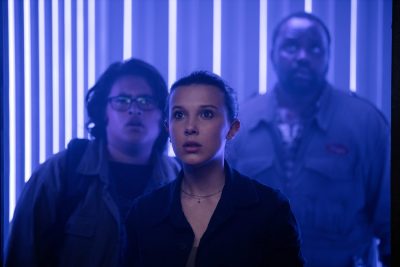 So here is where the film gets a bit off the rails with regards to mythology. The idea of ‘hallow earth’ was touched on in the last Godzilla film. We even got a very light view of an undersea temple where Godzilla would go to regain his strength but it was always a side note. In Godzilla vs Kong, it becomes a central plot point in the effort to bring Kong home and the source of power for the Titans. This part of the story was interesting but felt a bit forced and not fully fleshed out. I came into it feeling like I missed a movie beforehand. And ultimately it wasn’t what I cared about in the film.

Now let’s talk about the full-on, Titan/Kaiju fighting. This is where the movie shines. This is ultimately what we wanted from the film and they delivered it beginning to end. The classic homages to the original Godzilla films and the sheer craziness of the fights were everything I wanted. We even got ourselves another classic villain that makes an entrance later in the film that presented a challenge to Kong and Godzilla alike. But where is the human element we had in the previous films?

There is something about these types of monster movies where the human story gets forgotten or underdeveloped in exchange for the mindless slugfest. While we had our cast return from the Gozilla films and Kong film, we just didn’t care enough about them. Millie Bobby Browns character had a lot of heart in the previous film and we actually cared about her and her family and how they were connected to the events of the film. Here, she is simply chasing down conspiracies (which happen to be right) but is nothing more than a side story that only manages to catch up to the main characters in the very end.

Regardless of the failures in the human element, I went into Godzilla vs Kong with the expectation of seeing an epic fight for the ages. I went into the film looking to see who was crowned King of the Titans. I was not disappointed. We highly recommend you see this film on as big a screen as you can. It is out now in theatres if they are open near you, and on HBO Max.