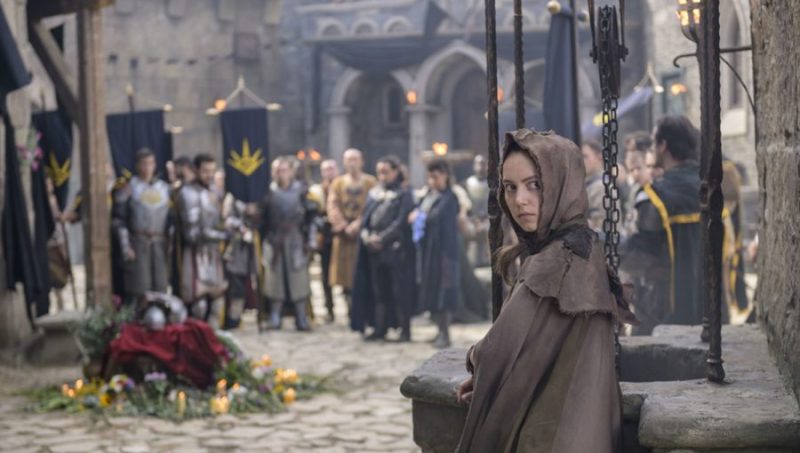 The Outpost: Changes, Threats & Adventure Return To The Realm – Preview

It’s been a long minute since we saw the developments unfold in season 3A of the fantasy-adventure gem, The Outpost. The CW offering has taken many twists and turns since its humble beginnings, but perhaps more than anything else, it has grown and improved in the three full seasons it has aired. And now, with a fourth season looming (or season 3B as they officially call it), the show has reached that wonderfully rarified air of its fandom having very high expectations. Give us more, more, more (Sorry, Billy Idol moment there). Thus far, the actors, writers, directors and overall vibe of the show have risen to the occasion time and time again. I expect nothing less in the new season, which premieres Thursday, July 15, (9 p.m. ET) on the CW.

I’m not going to rehash the finale of season 3B as it provided a ton of interesting moments – and losses (or potential losses). It feels as though The Outpost is at a crossroads in terms of the storytelling and where each character may end up by the time the next 13 episodes have unfolded. There will be adventure, there will be danger with new foes and unique threats emerging, and there will be new characters that we’ll have to sort through to decide if they are good, bad or a bit of both. And let’s face it, we love that kind of stuff. But it does feel as though there’s a pivot in the air for the show. We’ll see. 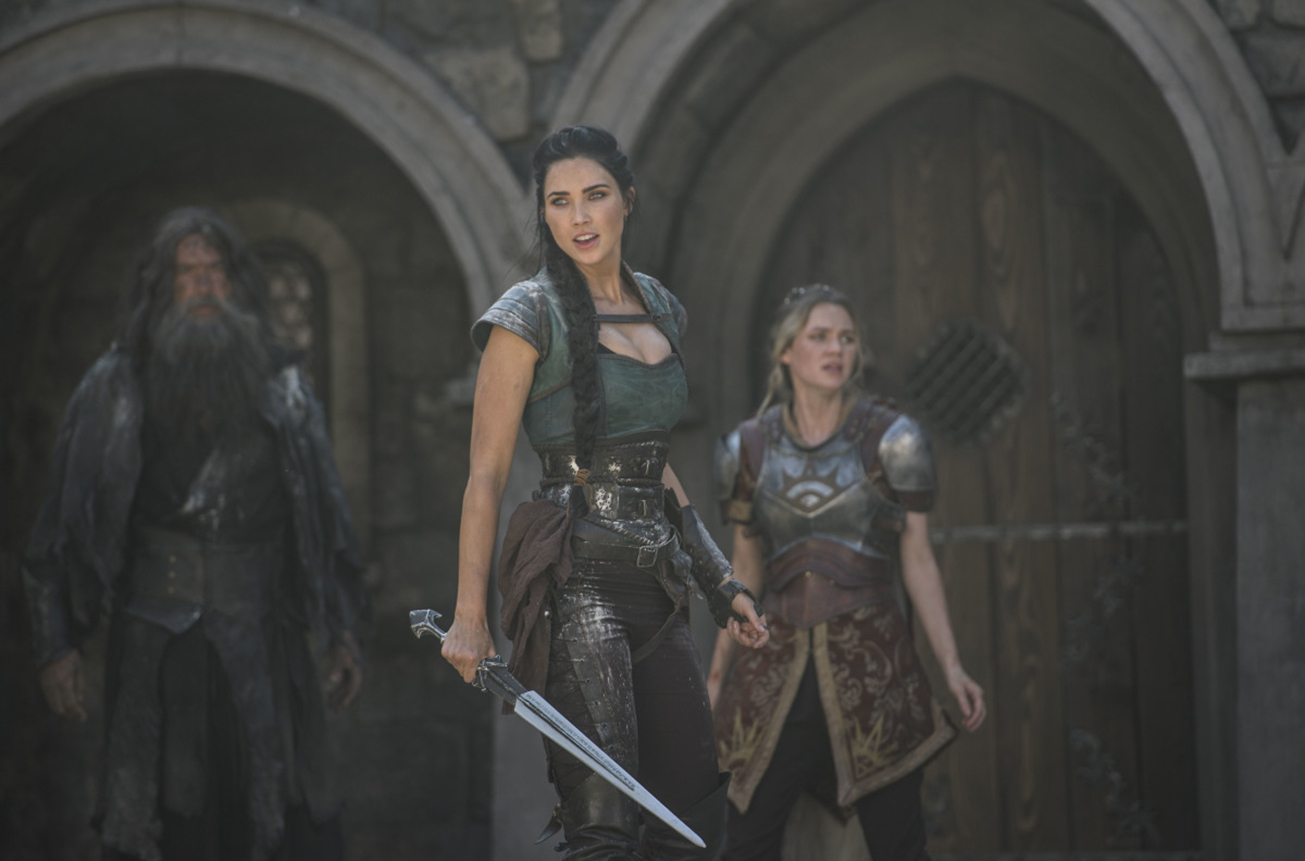 One of the questions hanging over the show as we get ready for 13 more episodes is – is this the end? There’s been no word from The CW on whether the show will get a fifth season, which is interesting given that the show has shown significant improvement in ratings and a growing and rabid fan base. It was voted the most popular show on The CW in a poll taken shortly after the last season concluded, so the silence concerning the fate of The Outpost is a bit worrisome. The truth is that in the fantasy/adventure/sci-fi genre, getting to a third season is a big deal. The Outpost enters its fourth (depending on how you want to label it) season and its popularity appears to be growing, which is an interesting and delightful conundrum. Here’s hoping we get a bit more action from the Realm in the coming year.

But that’s a question that will be answered in time. For now, the fate of Janzo, Wren, Talon, Garret, Munt and the rest of the folks in the Gallwood Outpost, as well as the rest of the realm, seems to be hanging in the balance. Here’s a synopsis of what’s happening as the new season starts from The CW.

“After Gwynn (Imogen Waterhouse) sacrificed herself to destroy Yavalla, the Outpost needs a new ruler. But while Talon (Jessica Green) and Garret (Jake Stormoen) try to establish new leadership, a sinister threat awakens, revealing the true origin of the mysterious kinjes. Talon and her kinge-bearing friends all share dark visions from god-like beings who are hell-bent on reclaiming the kinjes for themselves. A would-be assassin (Maeve Courtier-Lilly) hunts Talon down to get vengeance for crimes of the past, but soon discovers that her own heritage is wrapped up in Talon’s fate.

Mourning the recent loss of her beloved Tobin (Aaron Fontaine), Falista (Georgia May Foote) is mentored by Two to dedicate herself to the new “gods” in exchange for a costly favor. But when the Lu Qiri go missing, Talon and Zed (Reece Ritchie) track them down to discover the greatest threat the Realm has ever faced…a new race of beings that will ultimately explain Talon’s own dark origins. 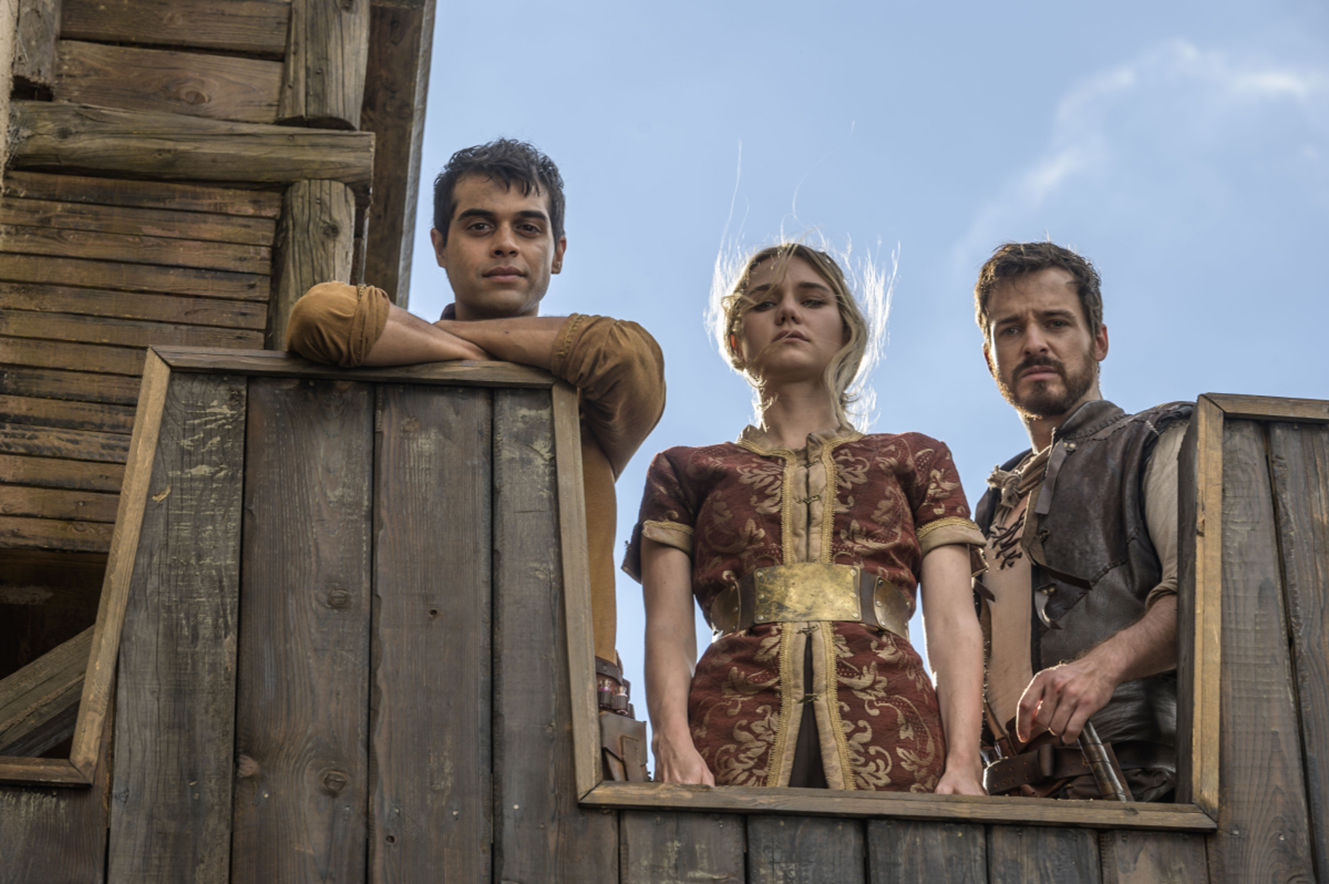 When Janzo (Anand Desai-Barochia) and Wren (Izuka Hoyle) are forced to unlock an ancient city beneath the Outpost, they struggle to uncover who their real allies and enemies will be, while a secret they share gives them a new motivation to save the world.

As she and her friends are hunted down one by one, while diabolic forces are tearing her world apart, Talon endures the darkest challenge she has ever faced, as she struggles to embrace the heroes of her past and somehow survive the villains that only she has the power to destroy.

A couple interesting things here, and again I don’t want to micro-examine it all – there will be time for that later, but it’s interesting to note that Aaron Fontaine is listed as part of this new season’s cast. I wonder if the phrase “Heroes of the past” means we’ll have some flashbacks or perhaps a little mystical force-like return of some of the people we’ve seen previously in the show? Clearly Tobin is dead, but it appears he’s not totally dead, which will make fans pretty excited. 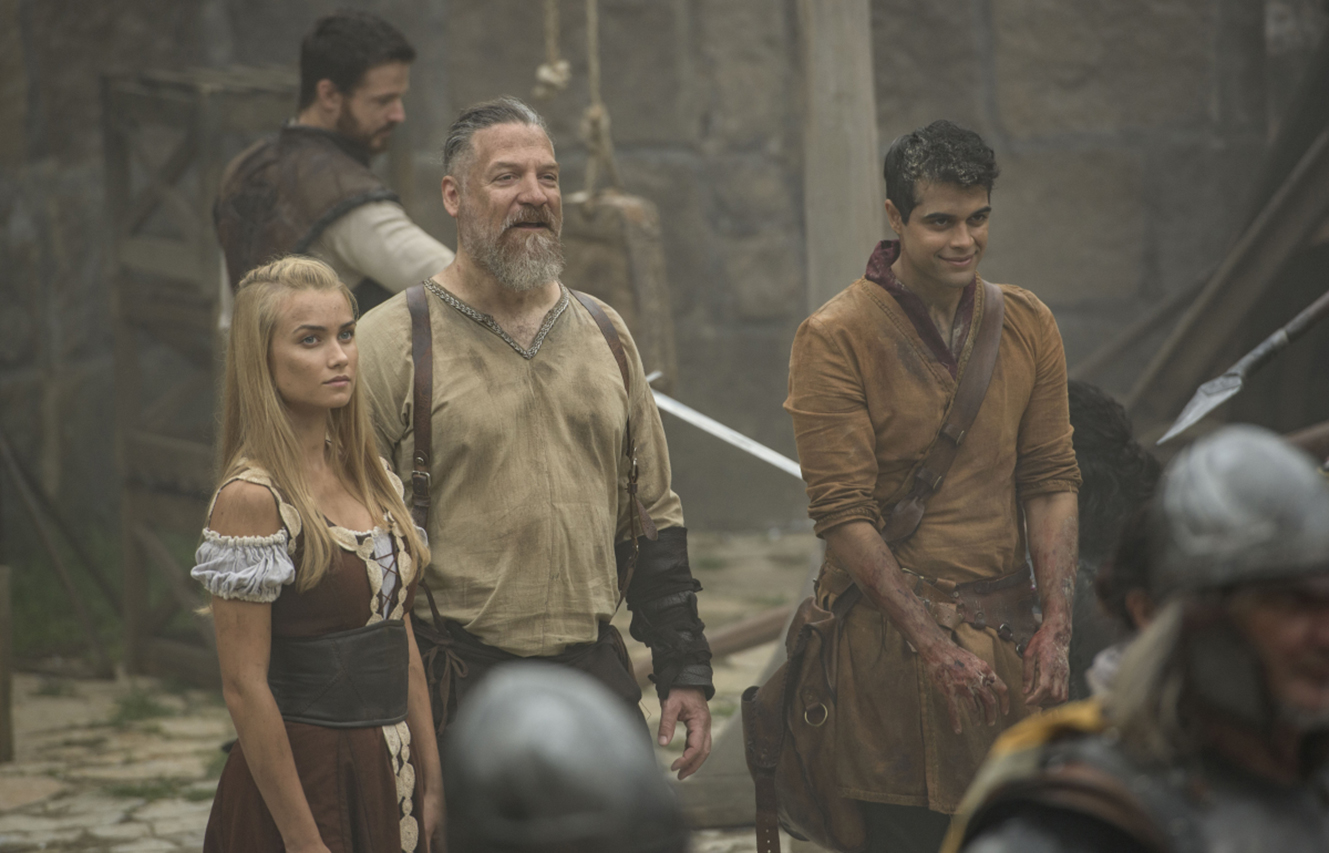 I’m excited to learn about the origin of the Kinjes and, perhaps, the relationship between them, Talon’s mom and the banishment of the Blackbloods to the Plain of Ashes. The kinjes have been a wonderful little mystery throughout the show and I’m delighted to think we’ll get some clarity here. I’m also very interested in Falista (who obviously heals from her wound) and Two forming some sort of alliance. Perhaps Two is hoping to recruit Falista into the open arms of The Three (currently minus 1).

There’s a lot of unanswered questions running through this show, but the synopsis seems to indicate that some of those may get answered by the time we’re done here. Another little tidbit that I find interesting is that Wren and Janzo share a secret that offers “new motivation to save the world.” Mmm, could Wren be preggers via Janzo. That would be an interesting twist, but certainly fits this scenario. Oh, I could go on and on but I promised to keep a lid on things. Also of interest to me is Talon as the potential ruler. The first episode is entitled “Someone has to rule,” which doesn’t seem to usher in a lot of confidence. Talon is a doer, a charger, a person without a lot of patience, so the idea of ruling something and dealing with all that comes with it, even with Garrett at her side, doesn’t seem to suit her. We’ll see where that all leads. 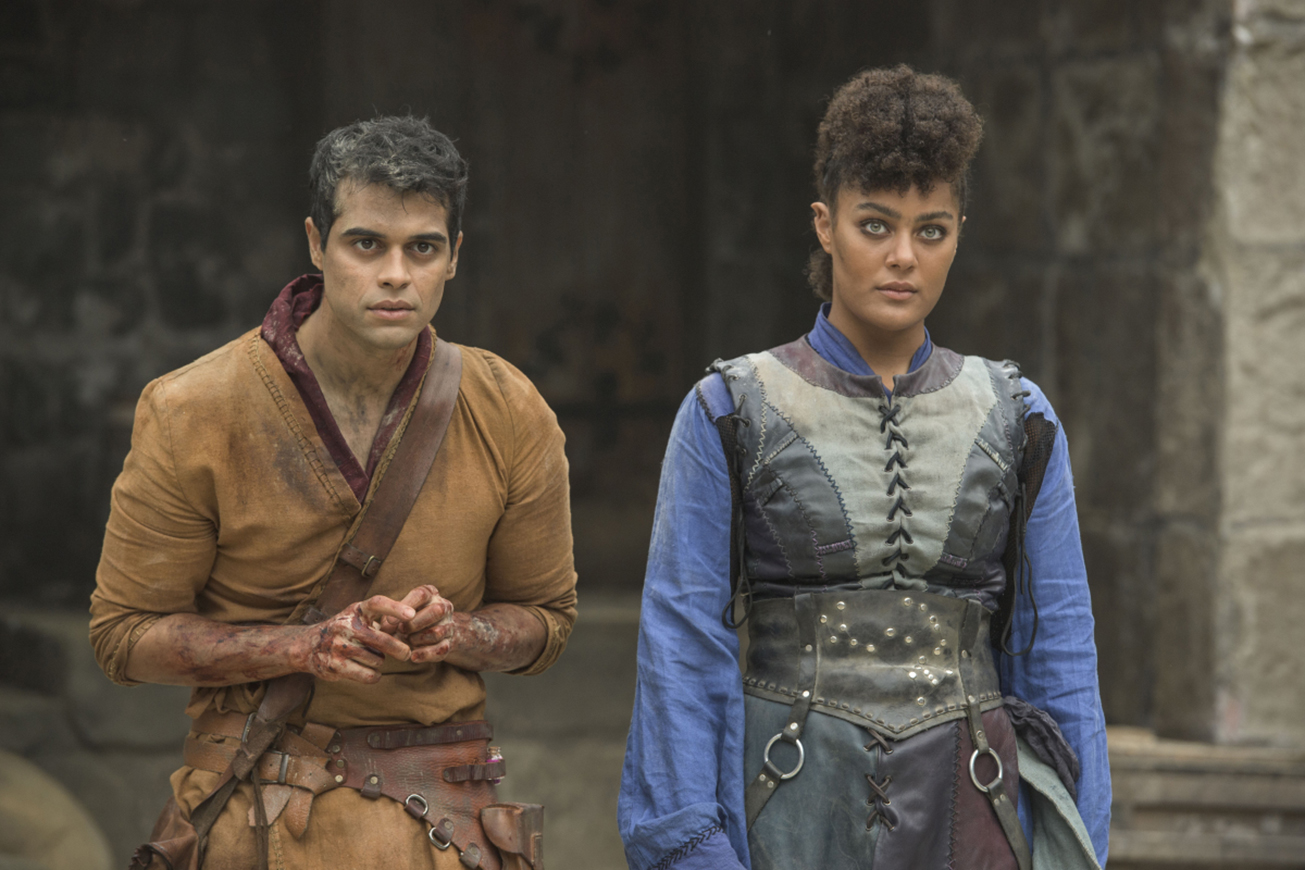 One things I do want to mention is that I think the sign of a good show, a quality show, is the growth and passion of the fan base. Clearly, The Outpost has seen a rise in the fandom through three seasons, and its fan base is a passionate and invested one. I pay no heed to the “critics” who pan shows like this. Fantasy-Adventure (along with sci-fi) is a special realm of entertainment and is often left underappreciated and overly criticized. But, it is also the genre most likely to inspire passionate and involved fans, who look beyond any real or imagined shortcomings to fully invest themselves in the show. That, my friends, is exactly what The Outpost has done. I’m thrilled to be back writing about it.

Also back this year will by my live radio show, The Outpost Calling. Right now it looks like we’ll broadcast every Saturday at 5 p.m. (PT) throughout the season. We’ll break down episodes, pose interesting (most of the time) questions, and generally revel in the show we love. You can find us live (and past shows) right here: https://www.threeifbyspace.net/three-if-by-space-live-radio/. The show is live on Saturdays then morphs into a Podcast (I guess), so be sure to tune in and call in to offer your thoughts on the show each week or generally. We start with a preview show on July 10 where we’ll talk about what’s happened and what’s to come. Give us a listen or DM me on Twitter or IG.