As part of Netflix’s coverage at San Diego ComicCon@Home this year, Lucifer’s Tom Ellis joined executive producers, Joe Henderson and Ildy Modrovich to share the inside scoop on what is to be expected from the sixth and final season and to reminisce on the success of season 5. One of the most important highlights of the brief panel was the much-anticipated announcement of the premiere date for season 6. The date, September 10th, was provided along with a promotional video clip that highlights scenes from the series through today and gives us a glimpse of a scene from season 6.

The panel interview itself was short but enjoyable.  The interviewer was Luke Cook, who played Lucifer in another Netflix show, Chilling Adventures of Sabrina. I agreed completely with Luke that season 5 of Lucifer was the best season so far, making me hopeful that season 6 will be even better.  I felt that season 5 was extremely well written, well performed and well produced. My friend Nadra and I binge watched season 5A (they released season 5 in two halves almost a year apart) last summer when she came to visit me, and we loved it as we had loved the past seasons. This summer when I visited with Nadra at her cousin’s house, we decided to keep with the tradition and binge watched season 5B.  Her cousin, Karen, had never seen any episodes of Lucifer, so we gave her a quick synopsis of the show and invited her to watch along with us. She immediately got hooked into the story and so invested in the characters that she cried right along with us at the emotional scenes.  And I hear that she has since gone back to season 1 and watched the other episodes that she hadn’t seen. 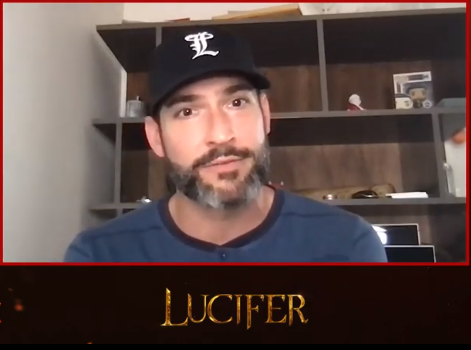 Season 5 took some risks and had fun with various episodes.  One of my favorites was the musical episode, where at random moments in the show, various characters would spontaneously break into song. As it turns out, this was a favorite of the cast and crew as well.  Tom said that he’d been able to sing a few times on the show already and he was grateful that this series has enabled him to “fall in love with singing again”. I was able to attend a fan convention in Rome a few years ago where Tom Ellis was a guest.

Many of the other actor guests also were great singers and they encouraged Tom to sing along with them often throughout the weekend, so I knew that he had a great voice.  But his performance in the musical episode on season 5 was simply amazing. Both producers agreed that some scenes in the musical episode were so touching that everyone in the studio was in tears, especially during the duet with Tom and Dennis Haysbert, who plays his father, God. They were all very happy that they were able to find songs that fit the storylines so well and that they were successful in getting permission to use them.  Here is a short video that I took of Tom singing in Rome at the JIBLand convention in May of 2017.

Lucifer premiered on Fox in January 2016 but was cancelled from that network after the third season. Netflix thankfully picked up the show and moved the production from Vancouver, Canada back to Los Angeles. The fourth season received such high ratings that Netflix agreed to a fifth season.  As they were filming season 5, they had believed that the fifth season was to be the series finale.  However, in June of 2020 it was announced that the series would be renewed for a sixth and final season.  Which, of course, caused a lot of questions about the direction of the last season, some of which Tom, Ildy and Joe were able to answer today.

One of the first questions was surrounding the death of one of the main characters at the end of season 5, Dan Espinoza, played by Kevin Alejandro.  It turns out that the actor himself suggested that story line so that he could go out in a blaze of glory.  However, they didn’t confirm or deny if we may see this character again.  They did hint that there were some characters from the beginning who will show back up, such as Officer Diggs (Matt Corby) from the pilot episode, who we see in the promotional clip. They also teased that “other familiar faces” may return as well as one character who has been mentioned but who has yet to be seen.  And no confirmation on whether Ella and Officer Corbett get together (the odds should be pretty low that he is a serial killer too!) or if Ella ever finds out the truth about who Lucifer really is. 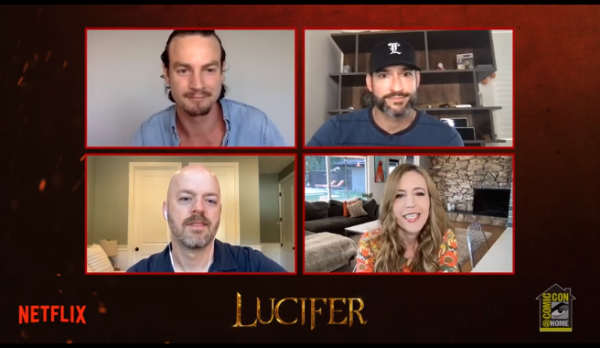 As for the ring Lucifer gives Chloe at the end of season 5, it was meant less as an engagement ring and more of a metaphor.  It was a symbol of his love but also of his self-sacrifice.  Some of the other hints at upcoming storylines are that Amenadiel will join the LAPD, Michael is in a “time out”, and that Lucifer will be solving many mysteries (he specifically used that word and not “crimes”).  But they did warn us that with Lucifer, he tends to take one step forward and then three steps back.  And that he may find out what the saying “watch out what you wish for” really means.

Contributor Samantha Kraupner is a major Outlander fan, but spreads her love to other areas of popular culture. She is a co-host of the Outlander Gab, threeifbyspace.net’s internet radio show. Sam loves to travel, especially to fan conferences, including those for Supernatural and Outlander. She is also the “photographer of record” for much of TIBS’ Outlander event coverage.