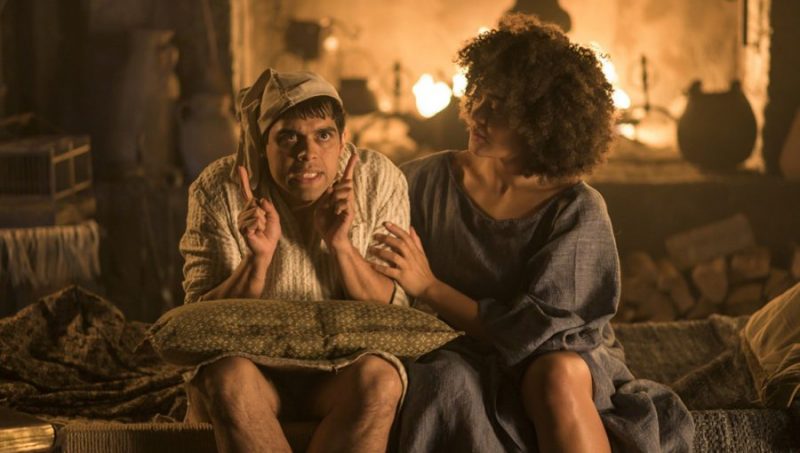 It’s interesting to me that with so many salty operators within its walls, that the latest episode of The Outpost would have so many naive, reactionary moments within it. But that’s what struck me about episode 3B02, “A Throne of Your Own.” And in the end, a small tide was turned by a man who, until days before, was a corpse. So, gonna give a little shout out to Tobin for taking the bull by the horns – or more precisly the Three by the throat — and perhaps turning the tables in a more favorable position. We shall see.

Let me preface this with a straight-forward reaction to this episode — I loved it. I think all involved have knocked it out of the park in the first two episodes of this new season. Lots of information, lot of interesting developments and they have left me with a very real desire for more – right now, immediately. I don’t know what more I can ask from a show? A marvelous start to the season.

But before we get into the action, here’s your SPOILER warning. There are SPOILERS ahead, so if you don’t want to be SPOILED, go not one step beyond. But, if you seen the episode, or like me, you don’t really get bothered by SPOILERS, please proceed with a hop in your step and a nice, cold Night Shade beverage in your  hand…while you still can. 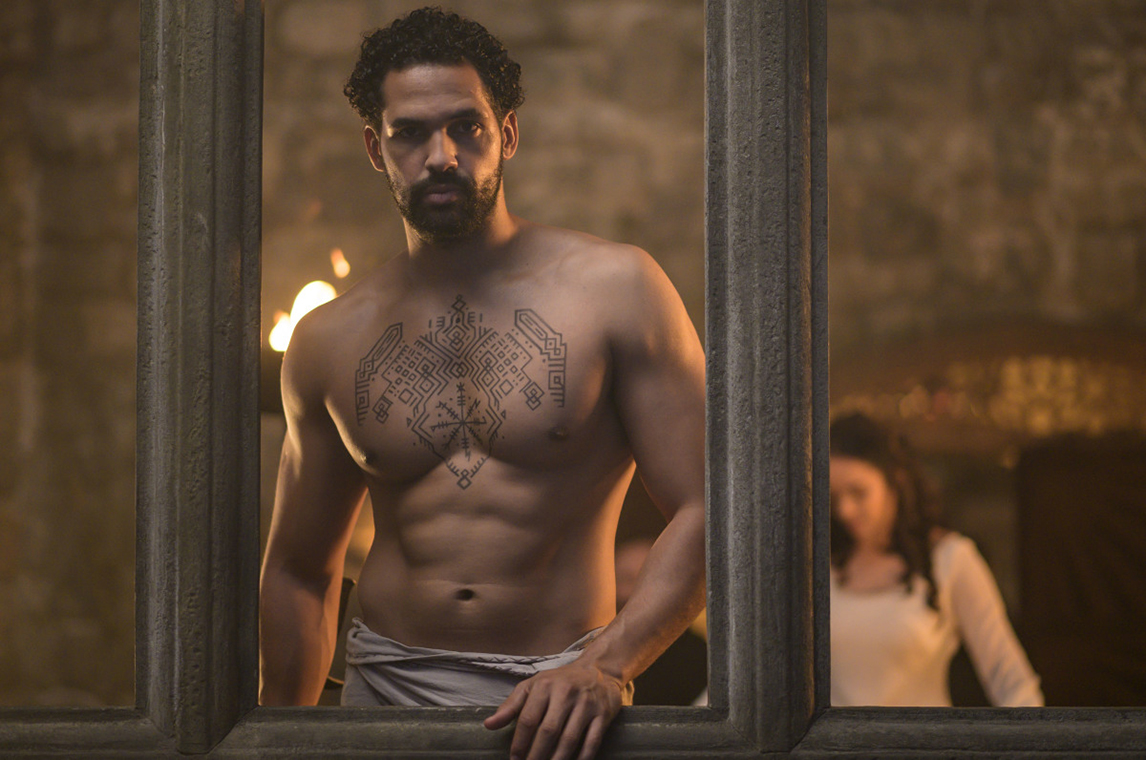 I thought there were more than a couple impetuous moments in this episode, beginning with Garret Spears attacking The Two and being defeated fairly handily. It’s clear the pain and anguish of his ordeal at the hands of The Three is a wound that simply won’t heal. It’s also clear his pain and PTSD from his experience will continue to cloud his vision and decision-making at times. In this case, it got him put in jail where he would soon meet Luna, who also would act with a cavalier naivete.

Remember that debt Luna said she had to repay Talon. Well, after a bit of chit-chat with Garret in the cell, she decides that the best way to pay off that debt is an assassination attempt on Falista. You know, get rid of Falista and Talon could become queen and everyone would be happy. Unfortunately, her lack of vision of the big picture led her down a path that was both ill-conceived and poorly thought out. She failed and that played right into the hands of The Two, who used the incident to drop a little more oppression onto the heads of those in the Outpost. And slowly but surely, they were bending Falista to their will.

The Covenant Guards were unleashed and the old terrors were becoming real again. Hell, they even closed down the Night Shade. No boozing at the Outpost, it would seem. Yes, I’m as horrified as you are. Luna, my dear, that just played right into Two and Three’s hands. You’ve got to think, lady. The beauty of being naive is you don’t necessarily have to be concerned with the bigger picture, I guess.

So, while Garret and Luna demonstrated varying degrees of naivete, it’s clear the Falista also has that little trait within her. She’s clearly been pampered and spoiled most of her life and walks around with a sense of “this is fun” that isn’t reflected by anyone else. The Two have an agenda and bit by bit were “advising” Falista on some measures that were blunt and hard-edged. Falista, despite Tobin’s counsel, doesn’t seem to be mature enough or sophisticated in the day-to-day issues to grasp that she’s being maneuvered into a corner. She thinks The Two serve her while it’s clear The Two see her as a means to an end. 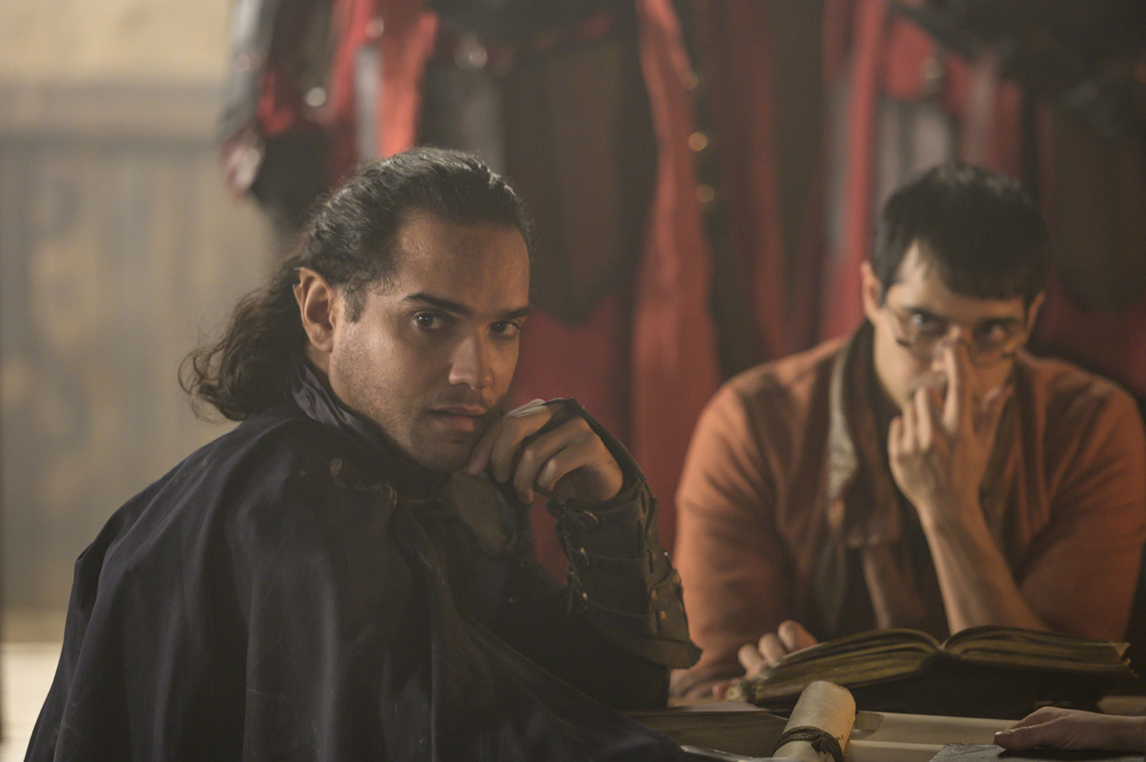 The Outpost — “A Throne of Your Own” — Pictured (L – R): Reece Ritchie as Zed and Anand Desai-Barochia as Janzo — Photo: Aleksandar Letic/NBCU International — 2020 Outpost TV LLC. Courtesy of Electric Entertainment.

Yes, as I watched this episode I couldn’t help but be struck by the naive thinking that was going on all around and that while Talon used the phrase “What were you thinking?” a couple of times, she could have uttered it repeatedly throughout the episode. Clearly, clear and reasonable thought sort of went out the window in this episode, replaced by inaction or overreaction. Falista demonstrated clearly how over her head she is as the queen. That one scene were she said that Tobin didn’t really love her — I expected her to stomp her feet and get a pouty loop going. It was childish and demonstrated a lack of empathy and understanding on her part. I think those are things she lacks due to an immaturity.

She’s having fun and can’t understand why Tobin, who’d been mostly dead only days before, is reticent to join that happiness, or trust The Two. She doesn’t grasp the danger, nor has she learned from the past. Yes, she has an inner strength, a strong will and stubborness, but she’s very much in need of Tobin finding his A game mentally and emotionally to help her.

Fortunately, Tobin’s physical game was an A+ in this episode. And with it came a huge surprise and a possible turning of the tide on some fronts. Three’s patience with Falista finally ran out as he berated her for not executing Garret. So much so that he takes it upon his own authority to sign the death warrant for our hero, something Tobin and Falista object to. A quick orb to Falista’s throat with a dagger was a threat that Tobin would not tolerate….so he performed a public service – plunging his dagger into Three’s back with plenty of fire and irritation. And again and again he drove the blade home. 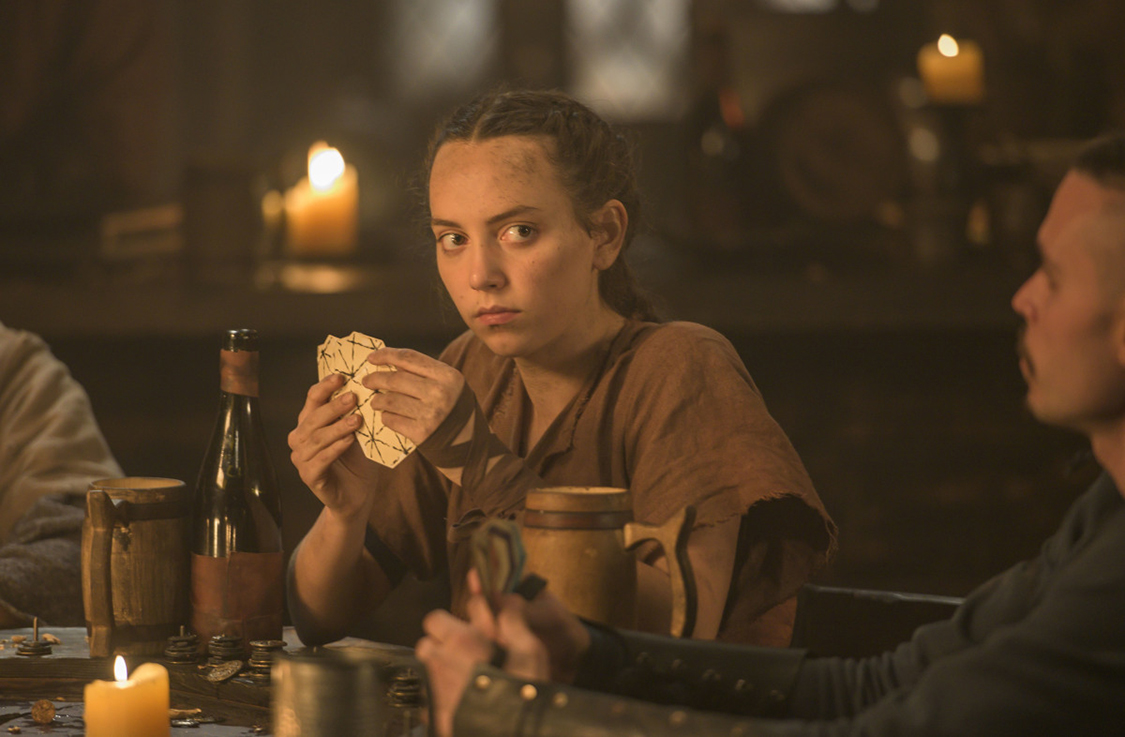 And then something totally unexpected occurred – Three’s Kinje transferred to Tobin. What? Wow, no one saw that coming, I bet. It’s interesting the desperation Three had in holding onto Tobin’s leg to pass the Kinje. There’s something about keeping these Kinje alive, and connected to the “Gods,” that is pretty powerful. Three was desperate to hold Tobin until the Kinje passed. And when it did, the dynamics of The Three suddenly and completely changed.

The 2-1 majority now rests with Falista and Tobin as One and Three, respectively, while Two had more than a little panic in her eyes as she pleaded that she could serve them well after Tobin said they should kill her, too. My, how the tide appears to have turned. I can’t wait to see just how Two handles it and just how severely Falista holds it over her head. You know Falista, when she gets an advantage, she plays it – hard!

The proverbial shoe is on the other foot now, huh lady? Perhaps, just perhaps, the Tobin-Falista pairing is the little edge they will need when they match up with the “Gods” at some point? I thought it was a dramatic and exciting development and, to be honest, Three was irritating me with his orbing in and out and outright threats. You can dislike Falista all you want, but I disliked how truly overmatched she was emotionally against Two and Three. They were playing her like a violin and she just didn’t have the emotional tools to grasp it. Now, the power dynamic has shifted and that should be interesting. For me, it was Tobin for the win when he gutted Three. 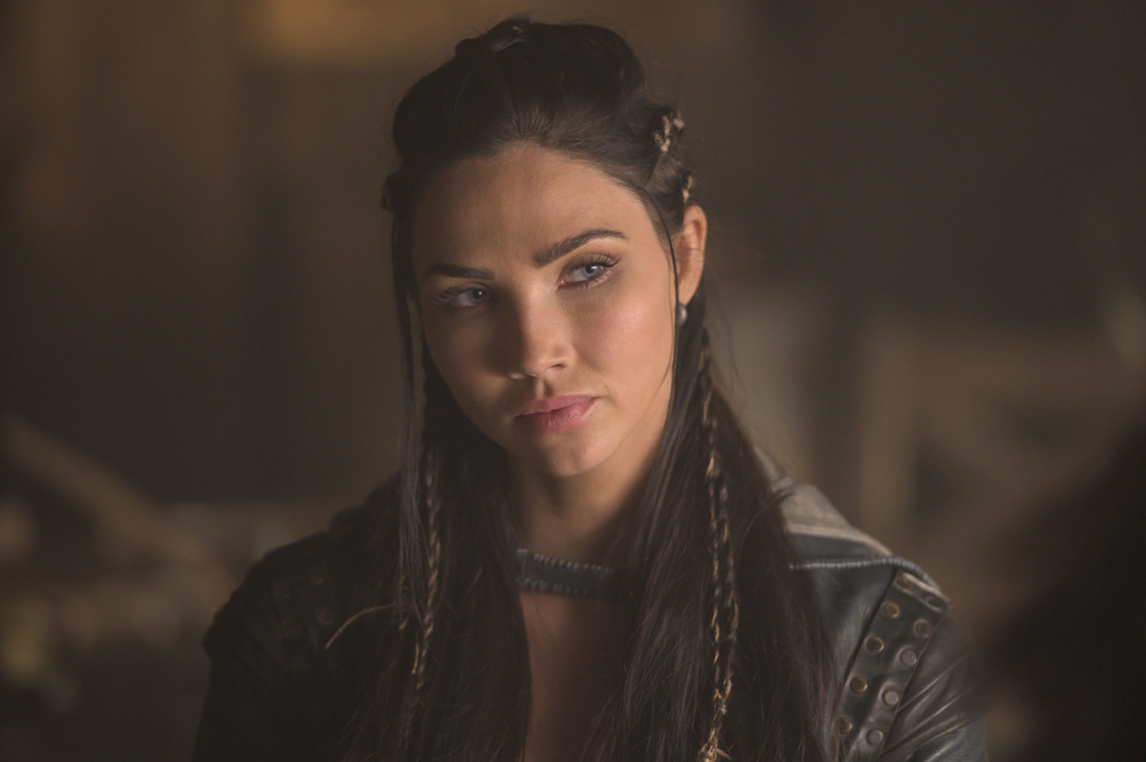 As for Garret, I suspect that the new dynamic of The Three is going to see him get a chance to be free. From there, don’t expect him to leave the path of defiance against Falista. There’s darkness in our knight, a darkness that leads to anger and poor decisions. I did enjoy he and Tobin’s chat in the dungeon. Nice to see the mutual respect they have for each other and the knowledge that each is a “good man.” I’d just like to see him make better, more calculated decisions. I did agree with Luna, however. Just lie, Garret. Get out and then plan your insurrection. Can’t do it rotting in a cell, bud. On the other hand, his line about “not living his life that way” was a nice reminder that honor and integrity matter to Garret Spears. That’s good to remember.

It was funny, when he was in the cell and Luna was next to him he said she reminded him of Talon. I couldn’t help but think that Garret reminded me of Talon in the opening scenes when he simply came unglued in a mad attempt at killing Two and Three. That kind of leap first mentality is so much like younger Talon. It all kind of comes around, doesn’t it? Indeed, what were you thinking, Garret?

Talon and Zed’s quest to find the missing Lu’Qiri ends in them unconscious and on the ground – but not dead. I’m curious about why the Lu’Qiri didn’t kill them as they had the farmers they’d rounded up? Do they still have some modicum of feeling for the Blackbloods? Was that on orders from The Gods? Seemed like Vorta may have a bit of thing for Zed, or at least the keeper of Zed’s Kinje. I felt a little flirty going on there, so watch yourself Zed. Vorta is probably a tad lonely. You know, God-hood and all that.

In the end, they shared their visions they’ve been having and got no answers when they talked to Wren. So, Vorta has made contact with all the Kinje-bearers, it would seem, with varying degrees of solicitude and enmity. You wonder about the history of the Kinje and how many more Gods are there out there and where are they? And what are the Lu’Qiri doing out in the woods – having a Lu’Qiri barbecue and annual meeting? I do need an answer about Talon’s Kinje and her mom, though. The mystery of the Blackblood banishment just gnaws at me. What happened and why? 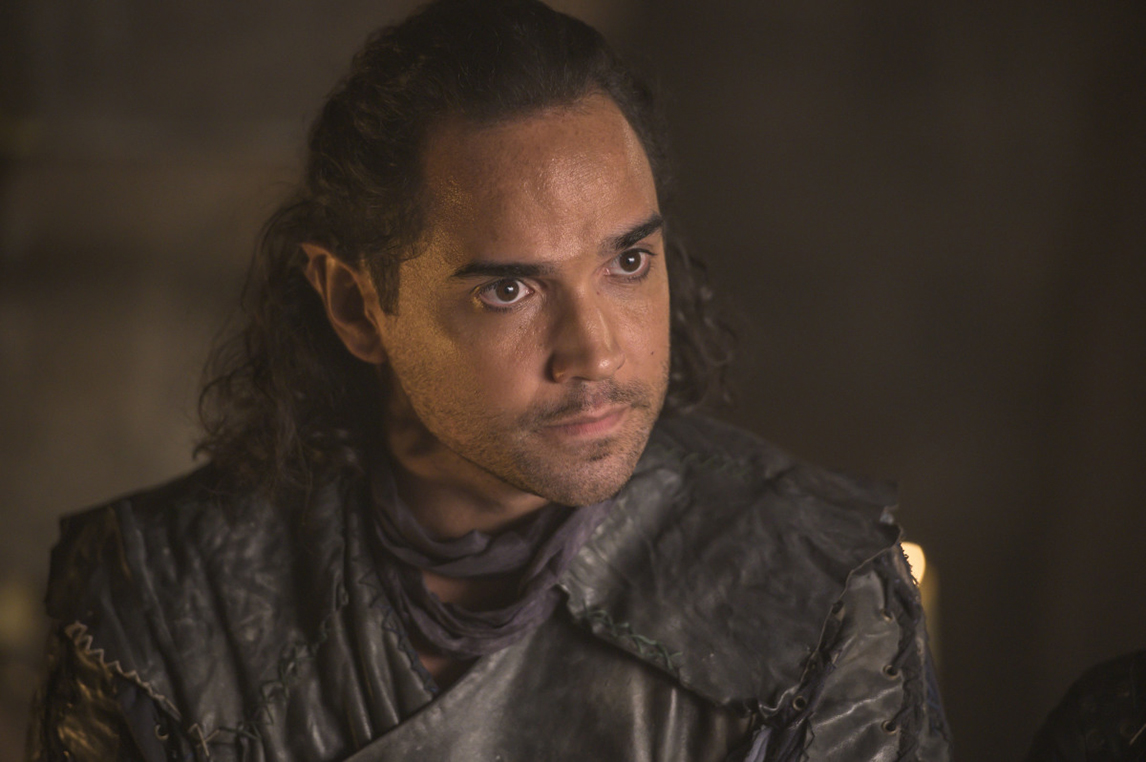 It feels very much like The Gods are pulling a lot of strings and our heroes are kind of in a crisis of reacting to that. It feels like Talon is a bit lost, Garret is struggling mentally, Falista and Tobin are trying to find their footing as royals and part of The Three, and Zed is wonderfully Zed-like in his desire to see the Blackbloods back from the Plain of Ashes. And Wren and Janzo? Well, the cat is out of the bag and Janzo is over the moon about Wren’s pregnancy.

Naturally he can’t keep his mouth shut and tells the worst person in the world about it – Munt. Naturally Munt is overjoyed about being an uncle, but any hopes of keeping it a secret with Munt in the loop is essentially gone. I was happy to see Warlita get a little run in this episode. Lately she’s just been window dressing standing off the side with nothing to do. Welcome back to the fray, Warlita.

One thing I’ve always enjoyed about The Outpost is the way the writers and whole team build up to interesting resolutions within the season, then do it again. It feels, already, like this thing is building to something big by the midway point and I’m excited to see The Gods get more involved. I’m also extremely curious about what Two does now that she’s outnumbered and by people who are, by nature, good at heart. Could she be a change-agent in all of this? I wonder..