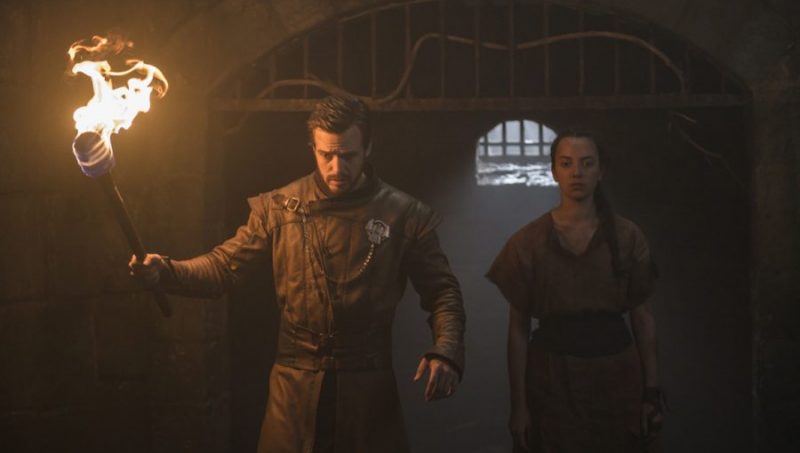 The Outpost: Falista Takes A Turn & The Blackblood Wars – Review Ep. 3B03

Is there any greater tribute to The Mistress than her boy Janzo opening a speakeasy in the Outpost? I mean talk about the apple not falling far from the tree. When The Outpost went “dry,” the opening of an underground establishment is exactly the thing The Mistress would have done to keep the coin flowing. In that moment, the years of unintended lessons the Mistress bestowed on her brilliant boy were fully realized. It was a magical moment in an episode with some interesting developments. And did you notice how delighted Janzo was? Brilliant!

So, let’s get into what went on in Ep. 3B03, “The Gods Thank You.” But first, be forewarned that there are SPOILERS in the offing. So, if you don’t want to be SPOILED, stop right here. If, however, you’ve already seen the episode or SPOILERS don’t bother you, then by all means read on. But just so you’re warned!!!

It looks at though Falista is drinking the Kool-Aid, doesn’t it? It was only an episode ago we were looking at Two as being in the danger zone, her power over the realm squashed as she was outnumbers by Tobin and Falista. Boy, did we misjudge her. Thanks to Falista’s flighty immaturity and fumbling of grasp of leadership, Two played her like a piano at a recital in this episode. It’s interesting to me because Falista seemed to have acquired some savvy when she sought to broker an alliance with the Blackbloods. That was a shrewd move (which turned out to be horrible) that seemed to show some growth. But she followed that up by Kinjing some guy in the square and letting her emotions and insecurities run wild within her. 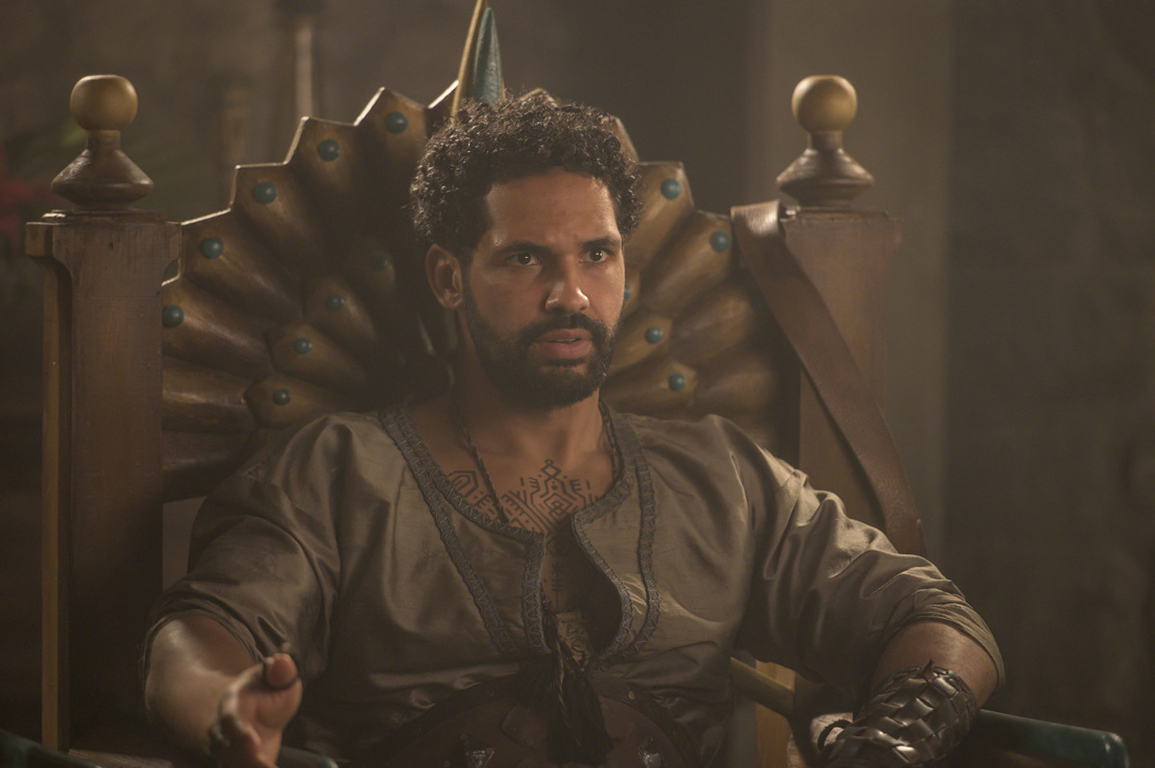 And that’s when Two pounced, playing on Falista’s need to be accepted and loved (You know, the floggings will continue until morale improves). Like a bow across a violin’s strings, Two just played a tune that Falista, in her young and impetuous state, started to dance to. And with that comes the crackdown on dissidents, etc. Falista can be maddening because she has these moments of real leadership and inspiration, but all too often gives into her base instincts of being insecure, naively ambitious.

As we see, Two is savvy campaigner and in the course of one episode turned her unfortunate, yet premature, demise into power and control. And it looks like Falista is feeling that her rule is being validated by the Gods. Oh, that’s a tangled and twisted path to walk down — the whole “the gods have chosen and accepted me” path. Georgia May Foote is an absolute delight as Falista, delivering a maddening array of contradictory behaviors that is both frustrating and fun to view. And Jelena Stupljanin as Two is wonderfully calculating, controlled and coolly malevolent. She’s good fun, too.

This thing may turn into a Tobin against Falista and Two situation before we get done, though I suspect Garret is going to have a little something to say about Two’s fate. Speaking of Garret, good to see him out of the cell, cleaned up and named the new gate marshal of The Outpost. He swears allegiance to Tobin, but not Falista or Two, and is tasked with finding Falista’s attacker. Well, he knows full well it’s Luna and the roots of a plan begins to take form. It’s insurrection, folks. He did look drab, drained and sad when they walked him in in chains. Kind of summed up his last two seasons, didn’t it? 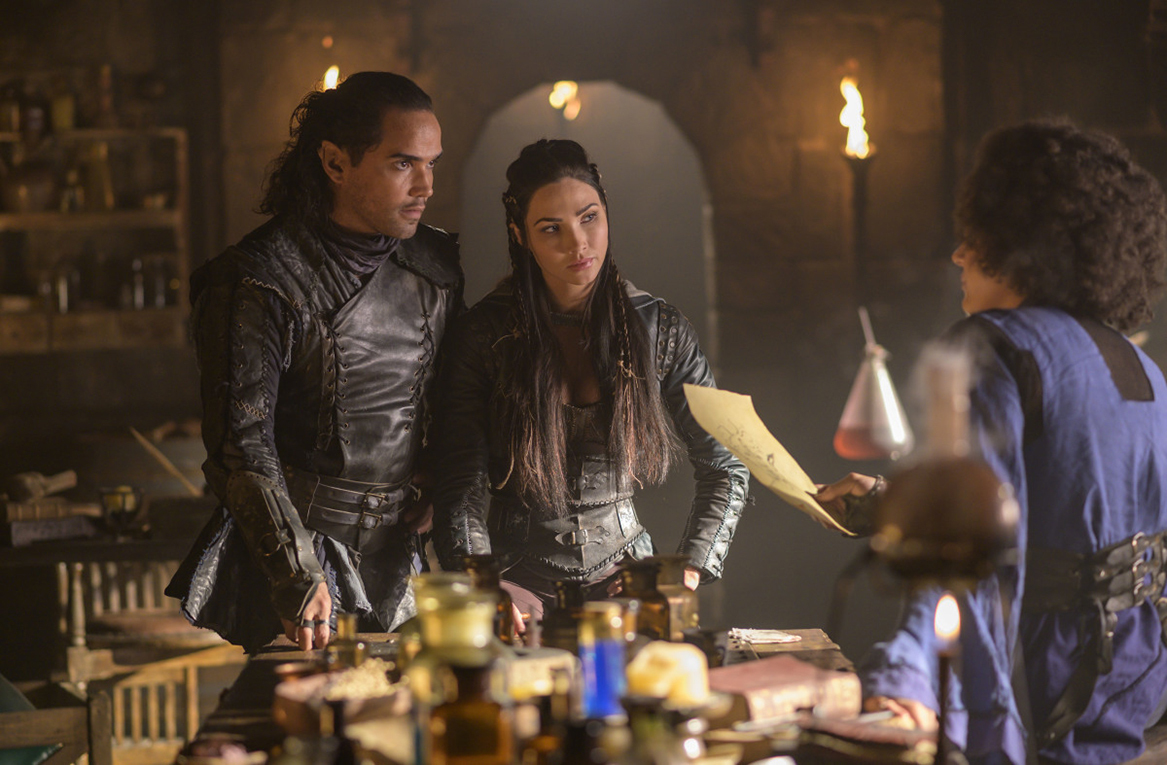 Garret wants Two’s head and Falista off the throne, which will likely put him in direct conflict with Tobin at some point. For now, Garret will use his freedom and access to start to stir the pot against the queen and her advisor, while keeping Tobin at bay. Oooooh, this should be juicy. For Garret Spears, I think the flicker of revenge has given him purpose again. Garret looked pretty sharp in his leather tunic and gate marshal emblem. Handsome rogue.

Tobin was trying his Kinje out and, in a state of drunkenness (thank you, Munt), accidentally orbed himself into the crypt that Vorta occupies. She calls to him and naturally it freaks him out a bit. When he tells Falista later, she thinks it’s a sign of their destiny. Clearly, Tobin isn’t really buying that, noting this entity was a creature of some kind. It is interesting that when Vorta communicates, she calls out names. There are several social media theories on this – the Kinje have names of their own or she’s using the names of the original bearers of the Kinjes.

The Kinje are entities unto themselves, so it’s not beyond the realm of reason that they might have names. But, it could be she is seeing the residual aura of those who were the first bearers of the Kinje. Interesting little side note to that whole occurrence. With her little table with those symbols, was she the keeper of the Kinjes or perhaps the keeper of those who bore the kinjes – back i nthe day? Interesting to theorize, isn’t it?

My feeling is the Tobin is going to get caught up in some unpleasantness. His wife is slowly being pulled into the web of Two and The Gods, something I don’t see Tobin, no matter his love for Falista, being okay with. And with Garret now planning a coup of some kind, it just strikes me that Tobin is going to be in the middle of whatever erupts – and have to make some decisions that will be painful. I’m really afraid he and Garret are going to have to square off again, something that doesn’t fill me with joy. So we’ll have to see how it all plays out, won’t we. One thing is nice, Tobin has chosen Munt as his personal valet, which should be a hoot. 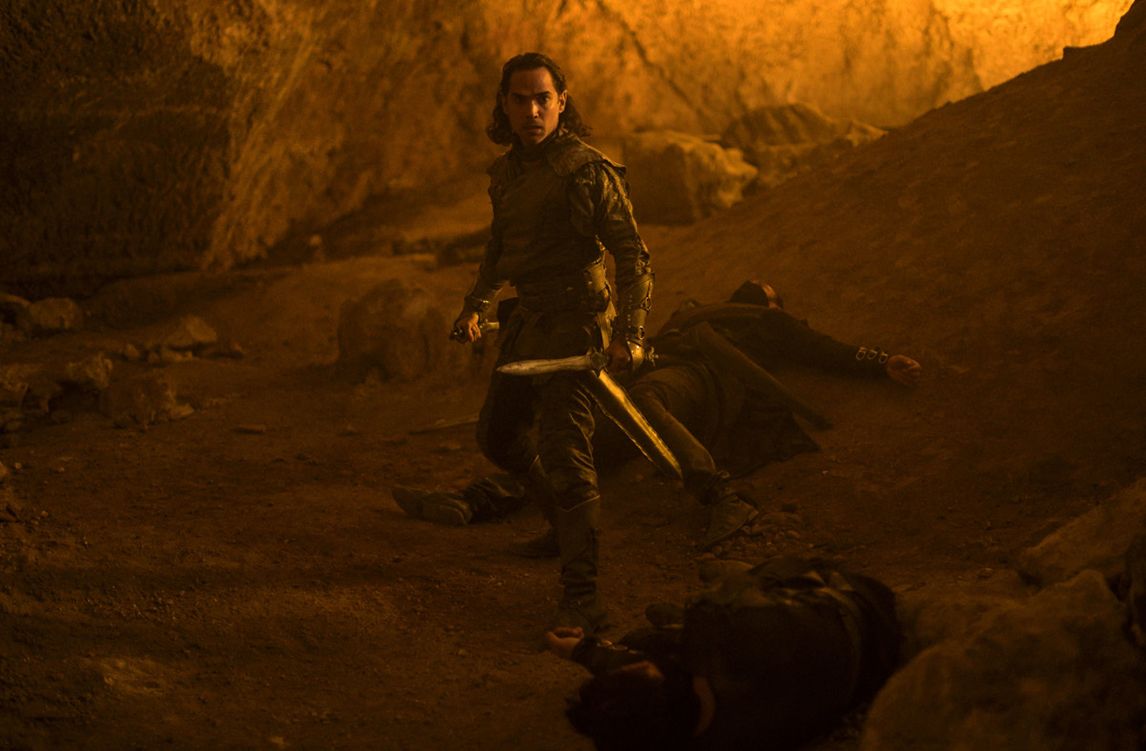 It’s good to see Munt have more to do again. He’s a fun character and we saw some interesting development with him later last season, so I like that Tobin trusts him. Adam Johnson does a great job with this character and the interaction with Tobin should be fascinating. Remember, in their time together last season, Tobin found Munt, in a simple way, able to offer some sound and useful advice. I don’t think he’s forgotten that.

Earlier I referred to Falista and the Blackbloods making a deal – they can have land and equal rights as long as they swear fealty to her. And with that deal, Wren, Talon and Zed go through the portal to the Plain of Ashes to bring everyone back. Unfortunately, in their absence a civil war has broken out between Blackbloods and Blackfist. Literally, most of their civilization has been wiped out. Wren needs the sacred texts of her mother to reinforce her thoughts of taking over as High Priestess, Zed wants to find Corven, and Talon simply wants to make sure it all goes well. Naturally, there are some Blackfist survivors and we have some fighting and other unpleasantness. When the dust settles, our trio are still whole, they’ve found some of their kind, and rescue a cadre of children.

It’s an interesting statement on hate, divisiveness and the path to total destruction. I don’t know if that was the intent, but I thought that whole arc had some interesting underlying message about people, who have far more in common than not, letting themselves be divided. In the end, total destruction for all factions is the only logical result. Maybe I’m over thinking it, but that’s how it played in  my mind. And with a writer’s room that isn’t afraid to dabble in subtlety, perhaps there was something to it.

But this all leads up to a devastating moment. Corven had saved the sacred texts from the Blackfist and was set to leave with the others when – a dying Blackfist looses an arrow and Corven steps in to take it to save his brother. So, in essence, the writers of The Outpost brought Corven back for an extended cameo that ends in him dying. I must protest. It’s really too darn much. Come on, man! I’ve been waiting for this character’s return and you do this? I was looking forward to his interaction with Janzo, the crazy vs. the brilliant and all the one-liners that would fly. But no, he’s dead. I’m appalled. Writers and their incredibly nimble knack for storytelling. Sheeesh! 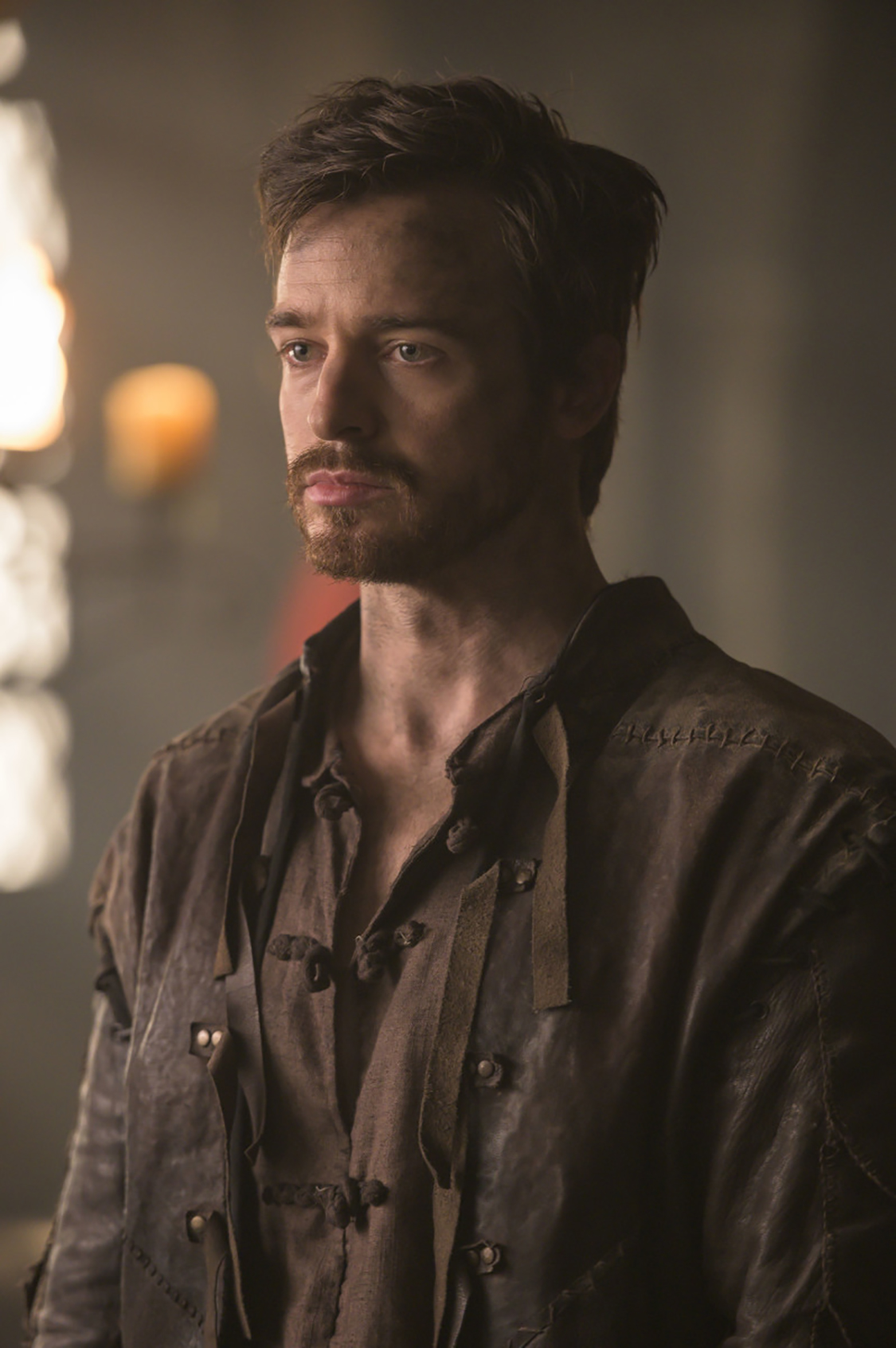 Unfortunately, that’s not the only thing to be appalled about. The carnage of dead bodies of Blackbloods and Blackfist alike must have been disheartening to our three travelers. At last, the point of being saved had arrived and there was almost no one to save. The hate, the distrust, the anger and old issues surfaced into a genocidal rampage that now leaves the Blackbloods with few souls. That’s a monumental disappointment and tragedy, one I think Zed, Talon and Wren will feel for a while, don’t you?

How will this play out when they return? Will Falista keep her word about land and equality or will the influence of Two sway her to betray her word. There’s something with Blackbloods and The Three that kind of lingers in the air. I wonder what it might be.

It feels like there is a big shoe to drop yet? What are The God’s plans? Where are the Lu’Qiri off to? What’s Two doing with all that life force she took from the prisoners? What is the Three’s relationship to the Gods? What’s this new evil we read about? The great thing about having 13 episodes is they can build The Outpost to a crescendo multiple times, something much harder to do in 8 or 10 episodes. It feels like we’re close to turning a corner that will take us into a new phase of the show. There’s something out there, something we haven’t seen yet, and I’m curious to know what it is and what it wants? And, will it unite the differing factions within The Outpost and the Realm?