The Tomorrow War – A Crunchy Snack of a Film: Review

For the last month, you haven’t been able to turn around without banging into an ad for Amazon Prime’s new sci-fi action thriller The Tomorrow War. Twitter, Facebook, TV, TikTok, Prime have all been shoving this film, which was supposed to have been released in theaters about the time the pandemic hit us. I always worry about a film when hype is this big – do they think we won’t watch unless we’re basically led to our devices and made to push the buttons?

Let’s start by saying – this film isn’t Independence Day, the iconic world vs. alien movie we all love. It isn’t even 2012, or War of the Worlds. What it is, though, isn’t bad – it’s worth your popcorn if you’re looking for something that will make you jump and let you watch Chris Pratt for a while. Of course, if it makes you want to turn to your friends watching with you and start considering them for snack value, you maybe need to get out a little more. 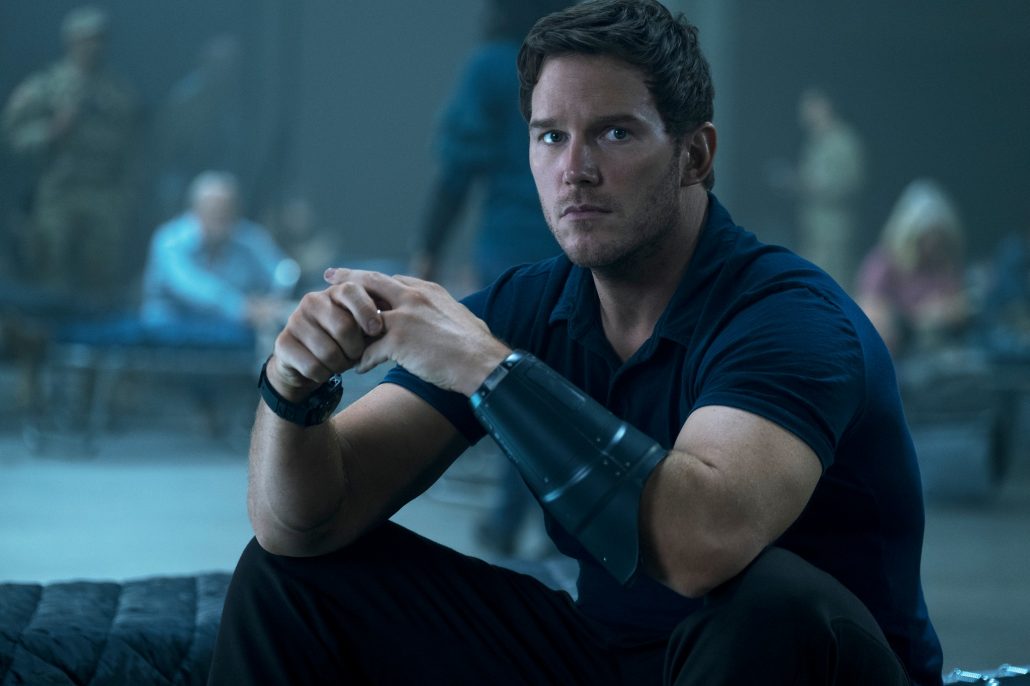 Thirty years from now, in 2051, aliens have nearly decimated Earth’s population, eating people like Doritos. The small human population that hasn’t been snacked on yet has figured out a way to come back to the past to recruit – er, draft – current-day humans for 7-day tours of duty to jump to the future and help fight what they honestly believe to be a losing battle. Apparently, world governments fall in line quickly, and begin a process of random selection – seniors, housewives – to jump into the future with little training. The entire term of service is one week, after all, and 80% don’t survive that. There seems to be only one qualification – that you would have already died before the time you jump into, so you’re not “crossing the stream.”

Into that mix comes Chris Pratt as Dan Forester, high school science teacher and former soldier. He has a family – his wife Emmy (Betty Gilpin) is a therapist, and their 9 year old daughter Muri is fascinated by science and plans to become a scientist, like dad. Dan’s father, the jacked-up JK Simmons, left Dan and his mother years earlier, after returning from one of America’s wars. As the family has friends over to watch a major soccer match, they, and the world, see jumpers from the future land on the soccer field and break the terrifying news about the alien invasion and state of the war. But this is about the extent of the emotional backstory we get in the first half of the film – this is not (yet) a movie about relationships. And that makes the first half move along fairly quickly, but with little to hold on to (although a scene of Emmy counseling a group of returned survivors does try to tug at those strings).

The alien species, named “whitespikes” because of the large spike they shoot at their prey, isn’t the scariest-looking creature Hollywood has devised, but it’s pretty creepy. The idea that we have an enemy who isn’t interested in negotiation, keeping humans as slaves, or anything other than munchies – or just mulch – isn’t new. They don’t use technology to defeat us, like the aliens in Independence Day – just their strength and sheer numbers. That they just plow right through anything the humans throw at them is definitely frightening. The military solution that we’ve seen in other films isn’t going to work here. 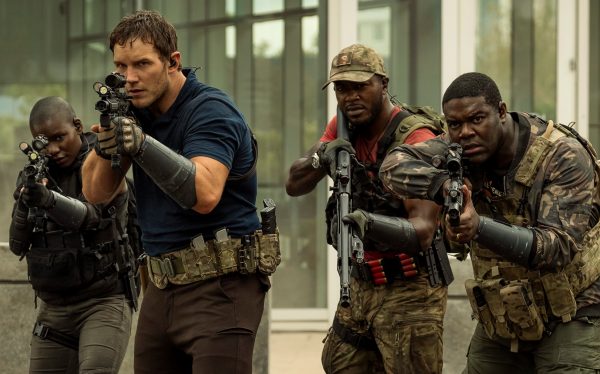 Unfortunately for The Tomorrow War, the only possible big gun is figuring out how to infect them and kill them that way. This is the second half of the film, and that’s where it begins to bog down. Forester and a few other of his fellow weekly time jumpees (including Mary Lynn Rajskub of 24) successfully complete at least part of their assignment, getting into the lab where some of this work was done and retrieving the samples the former science team created. Dan carries the samples to the remote, ocean-based lab, for the head scientist (Yvonne Strahovski, who really outclassed Pratt’s mugging with her quiet authority and subtle grief). Up until the point of Dan’s end-of-week return, I was right there with the film. It moved pretty well, and even the now-revealed relationship angle (which I won’t spoil for you) was probably predictable, although the film did a pretty good job of not leaving too many clues. 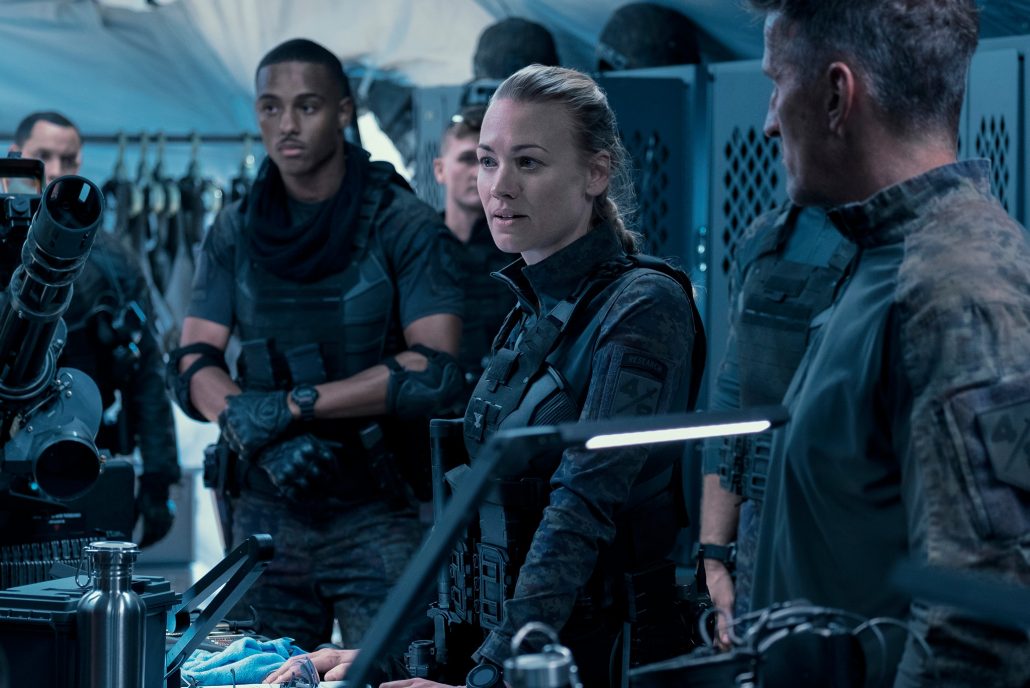 The biggest flaw of this film, though, is the last half hour. This is a long movie – two hours and 20 minutes – and felt longer because of the drag of the last portion of the story. Sure, you want to have a resolution – viewers want to know that the enemy will be defeated, we won’t all be cosmic Pringles at the end – but there had to be a better way to end this film and reduce the running time. The “solution” that had been developed – Dan jumps back to 2021 to mass produce the virus that had been created and jump back to kill off the aliens in 30 years – has so many problems that it just didn’t make any sense.

The story even tells us that time is linear – you can’t jump back to a different point in the future, it’s always 30 years from the point you’re now at, so someone would be going back 30 years from the time they’re able to make enough of the virus. If so few humans are left at the time Dan jumps back, will anyone be left in the time it takes to manufacture the virus? But the aliens have destroyed the time connection as Dan returns, cutting off that avenue. So he recruits his mercenary father, a genius kid from his science class, and a few fellow former jumpees, and goes searching for the point, and place, where the aliens first come to earth. Not only was the last portion completely rushed, it felt like a different film soldered onto the end. Would this have been better as two separate movies, with the last half hour expanded as a sequel? Probably.

I’m just as glad that The Tomorrow War wasn’t a big-screen, theatrical film. I don’t doubt that it will get more views as an at-home, Prime movie. It was a fun, if not wholly satisfying weekend watch, and the length really required that potty-break ability. Pratt has done better things, Strahovski was overqualified for this one – but as long as you aren’t expecting much more, you’ll have a good time.