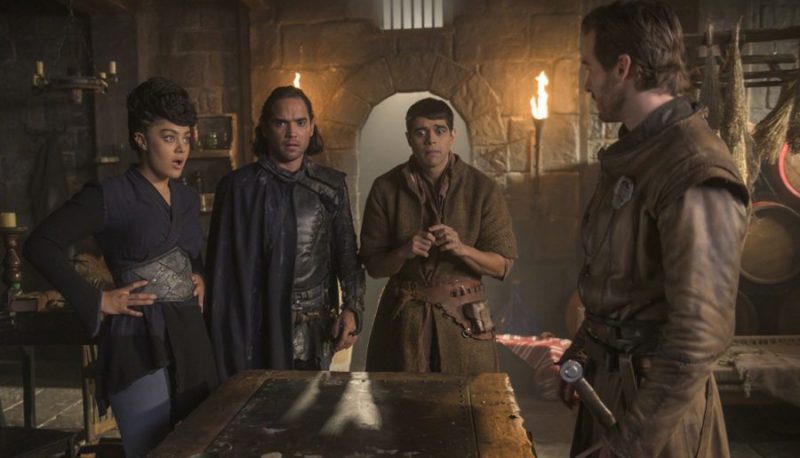 The Outpost: The Bell Tolls For Another Queen — Review, Ep. 407

One of the things that I’ve grown to really like about all those involved in the making of The Outpost is that they aren’t concerned with sparing our feelings or punching us in the gut. It’s often surprising and unpleasant, but that air of uncertainty — that anything can happen to any one of the characters – heightens the tensions on the show. We move along episode through episode and forget that they aren’t afraid to eliminate a popular character. Then BOOM!

We got another taste of that in this episode, titled “The Power of the Masters.” We knew that when Tobin and Falista were kneeling before The Three that something ominous was in the air and that the possibility of losing someone again, a main character, was very real. Well, it happened and while perhaps less of a surprise than other deaths, this one certainly puts the future of the Outpost and the realm in a new light.

So, before you continue, just know that SPOILERS will be up ahead. If you’re good with that, continue on. 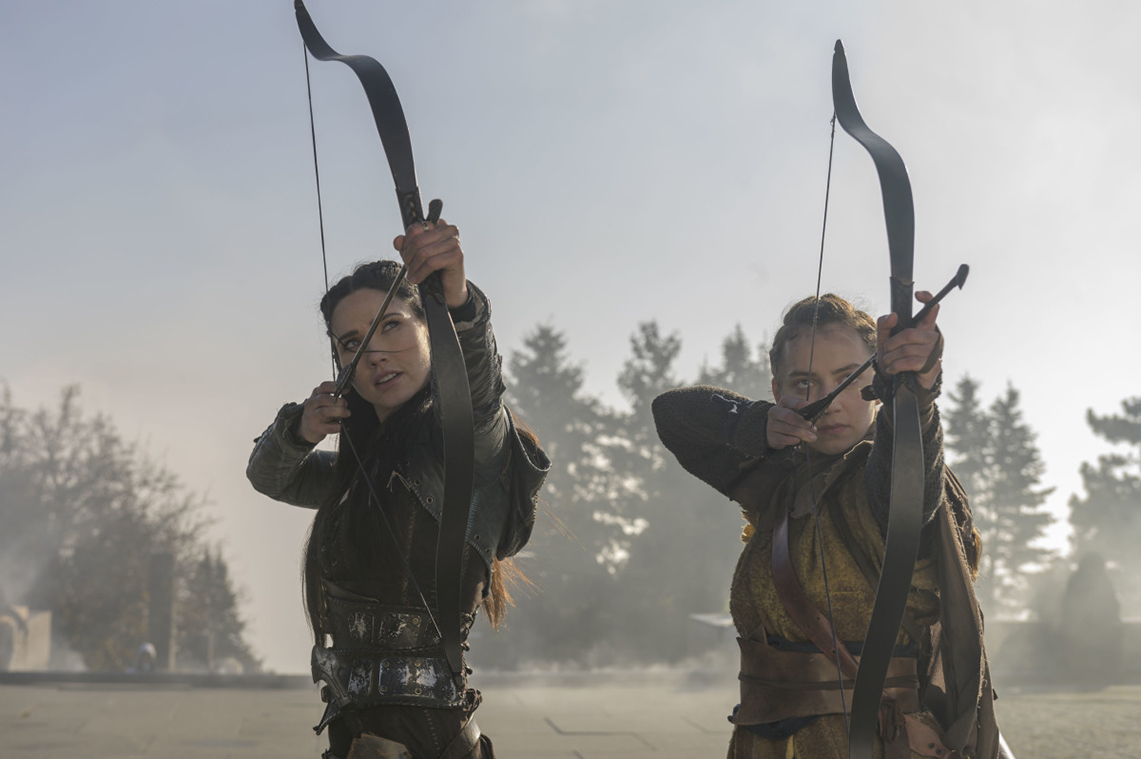 I don’t know if it could have ended any other way for Falista, to be honest. But man, right out of the gate – in the show’s first minute? Brutal stuff. It seemed as though she was doomed in some sense when she took up the mantle of The Three as a divine inspiration for her rule as queen. Let’s be honest for a moment, Falista’s ascension to the throne was fraught with uncertainty. I don’t think she would have taken the crown if she’d felt that the others understood and honored her pain at the loss of Tobin in the season’s opening episode.

It all seemed like an impetuous “I’ll show you guys” kind of display, one that seemed doomed to failure at the outset. And as queen, we saw Falista struggle to find love and acceptance as a ruler. Her insecurities were often laid bare, as were her immaturity and lack of preparedness for the role. She was unsteady from the start and that left her vulnerable to Two and, eventually, the influence of “The Gods.” Falista needed something to hold onto, something to steady her and the prospect of being divinely chosen provided just that – a false confidence in something that was clearly false.

But with it came a path that seemed to grow more delusional and more ominous with each step. The truth is, Falista’s sad demise seemed inevitable. And in this latest episode, we got it. I will miss Georgia May Foote’s work in this role. She got it spot-on time after time. Well done.

But what that does is open the door for Tobin, who escaped the clutches of The Three, to eventually rule as king. We shall see if that prospect comes to fruition, but after watching Falista flounder at times, Tobin’s been front-and-center to an experience that will stand him in good stead if he remains the king. Still, applause to the people who write, direct and run The Outpost. Once again you demonstrated that sometimes sacrifices need to be made to further that story. It can be a tough pill to swallow, but in the end it always seems to enhance what’s coming next. That’s good work by all. Now, Tobin is on the warparth with revenge and pain in his heart. One has to wonder if he’s long for this world, too. Just a thought.

The Emotional Toll
I noted this in a Twitter post this week, but when you step back and really look at things, The Outpost is filled with people who are going through emotional turmoil. It’s just all over the place. I can’t think of one character, aside from Munt and Warlita, that aren’t lugging emotional baggage around with them. I wonder if this has been an intentional implant into the stories to kind of heighten the tension or simply how it all sort of panned out as things went along.

Garret’s two-plus seasons of emotional anguish has been well-documented; Talon is dealing with the loss of father and Blackblood civilization, as well as Gwynn’s death; Janzo has to manage a coming change in his life while grappling with the Skevikor, his wife’s pregnancy and loss of a mother; Wren is not only pregnant, but must assist Janzo while also dealing with the death of her mother, the genocide of the Blackbloods and her ascension to high priestess; Tobin has been killed twice (which is plenty of stress in and of itself) and watched his beloved Falista descend into delusional madness while trying to support her, then watched her turn to ash at the hands of “the gods”; Zed is dealing with the loss of his people and struggling with how to care for those who remain; and Luna has developed a hard edge as she deals with a life alone and the murderous rampage that befell the Dragman monastery. . 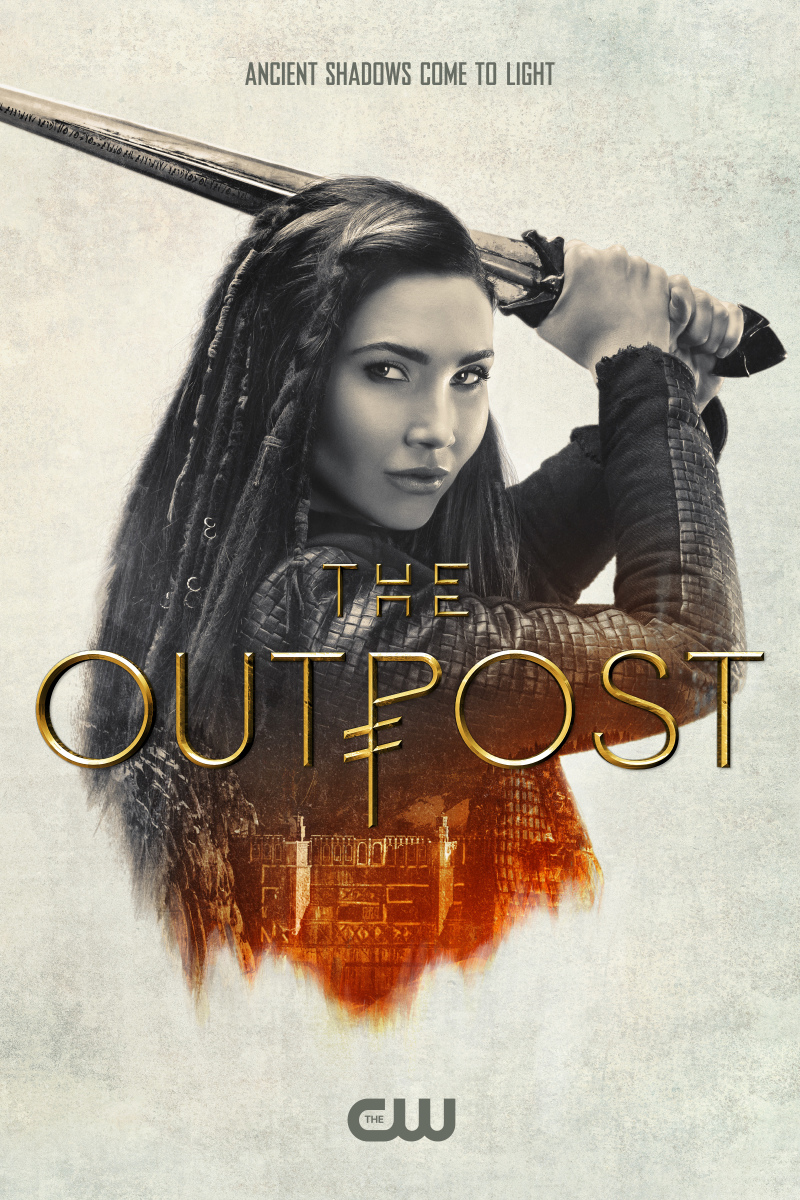 Taken separately, I suppose it doesn’t account for much, but together it builds a pretty strong case that just about all our heroes are emotionally compromised in some way – some of them very heavily. I think that’s an interesting aspect of The Outpost that maybe doesn’t get the discussion it needs. We see Talon recoil from Garret and wonder what’s the problem? Well, the problem is a long list of emotional scars that have left her unsure, unsettled and perhaps afraid to get close again. Taking that view, you kind of see where her “cheek only” moment with Garret might come from. Garret’s been a walking, talking emotional stew since season 2, so who knows where his head is at as he looks for some normalcy in his life.

Same goes for most of these characters — they have been through the wringer and when they come out, sometimes it’s with a little twist. Truth is, I like it. Nobody’s perfect, nobody’s unscathed, just a lot of people struggling to make it from one scene to the next with some level of positivity. In the end, did Dean Devlin and his crew concoct not only a fun fantasy-adventure show, but a bit of a psychological thriller as well? And now a death of a second queen…despite not being well-liked, it’s going to cause reverberations. And I think that’s exactly what those involved with the show want.

But wait, there’s more. We now have a pretty certain idea that Skevikor is the awakening of the “minions” to do the bidding of those creatures searching for the final Kinjes – the Masters. Clearly, there is a line between the masters and the minions, who would appear to simply be worker bees who do the bidding of their masters. The small revelations from 313 would seem to confirm that he and the rest of his kind, entombed in chambers below the Outpost, are the semi-mindless slaves of Vorta, Tera, Janya and the rest.

Which gives me pause. Even as Janzo so adroitly starts to earn his trust, I wonder if 313 and his people are capable of having their consciousness awakened to a new freedom from the masters? Clearly there’s a hive mentality there as evidenced by the frenzy about losing his “naviaspore.” Could they be the key to turning back what is to come? Could they turn into a valuable ally. Makes me somewhat hopeful. I’m also encouraged by Janzo and Wren’s soft touch, which is direct opposition to Garret, who wants this “thing” locked up. That seems to be something 313 and his people aren’t used to. Kindness as an incentive? Who knew?

Speaking of Garret, how much guff does that guy have to take? I mean it’s bad enough that Talon is cold to him, but he got attitude and lip from Zed and Janzo as well, not too mention the guard at the gate. People seem to be going out of their way to harsh Garret’s mellow of late and I’m not a fan of that. Again, though, just another added bit of tension and emotional struggle being heaped upon his handsome brow. When will Garret know peace and happiness? My soul cries out for it for this character. Let the torment end, Dean Devlin. Although, I did like the little shot across Zed’s bow about his breath repelling Nedra. I can see Zed and Nedra getting together on many levels. She’s all Blackblood all day long and to Zed’s credit, that’s how I see him, too. He’s devoted to his people and their survival, common ground I think Nedra will soon be willing to walk across to meet him. Her anger at him for not bringing the Blackbloods through really doesn’t ring accurate and I think that’s going to soften as we move along. Truth is, that responsibility rested with Talon, not Zed. As we know, he tried time and time and time again to get her to do it. But, circumstances prevented it.

So now we have four “gods” with their Kinjes and they certainly look formidable. To say I’m delighted that those four just happened upon Talon, Luna and Naya (Yes, she’s back – and I’m delighted. Now bring Gertrusha back and I’ll be completely happy) at the Everit Dred Temple Of Health and Relaxation is an understatement. Our first face-off with Talon and the gods should be interesting. And with Tobin filled with rage and hurt and orbing around out there, who knows how this showdown will turn out.

Luna clearly has a little more in her bag than we’ve seen (I didn’t hear the humming) and Talon is pretty formidable. Even Naya gutted a temple guard, which was impressive. So, it kind of comes down to this — Talon and  her group have the Skevikor key, the gods want it, and if they release the rest of 313’s kin, could induce their minions to start a genocide of their own. This is a big moment on the temple steps.

Interestingly, Tera noted that the humans were only good for being harvested. I shudder to think that that might mean in a “food” sort of way. I do wonder how the Blackbloods would play into that. They certainly have some relational value to the gods. Or is the black blood just a coincidence? One wonders if the dinner platter is only for humans, while Blackbloods would serve a different purpose? Also, did you notice 313 had hair, which the masters don’t? Anyway, looks like a showdown at the temple, which should set the next section of episodes in motion.

Also, a shout-out to Munt for being the guy who captured 313 when he escaped Janzo’s lab. Munt wielded that pitchfork with a painters grace, didn’t he. Fortunately Zed came along to mind control 313 before he whipped Munt to a fare-thee-well. So, we know that the masters have ill-intentions for the majority of the humans in the realm, we know they are fairly powerful, but we also know they have some need for assistance from their minions. Again, I think that’s going to be their weakness. Can the 313 and his kin be turned into an asset for Garret, Talon and the rest of the crew in The Outpost?