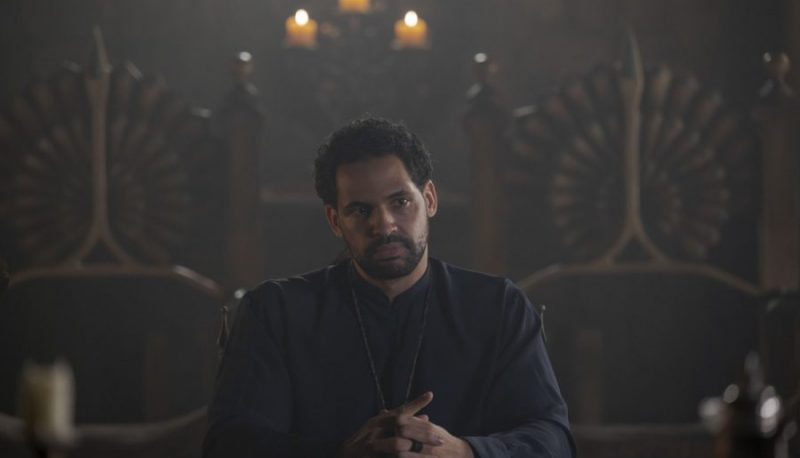 Man, you can’t say the creators of The Outpost aren’t keeping us on our toes in season four. The plot turns are coming thick and fast and it is clear that no one is safe from the writer’s red editing pencil. And so it was in episode 408, “The Pleasing Voice of the Masters,” that we were once again facing the very real truth that loss is a big part of this show. And while I suppose you could see this one coming to some extent, two deaths back-to-back leaves a bit of wound, doesn’t it?

Before you read on, be forewarned that this review contains SPOILERS. So, if you haven’t seen the episode and don’t want to be SPOILED, stop in the name of love. If you have seen it or don’t care, then proceed. But be forewarned, there are  SPOILERS. 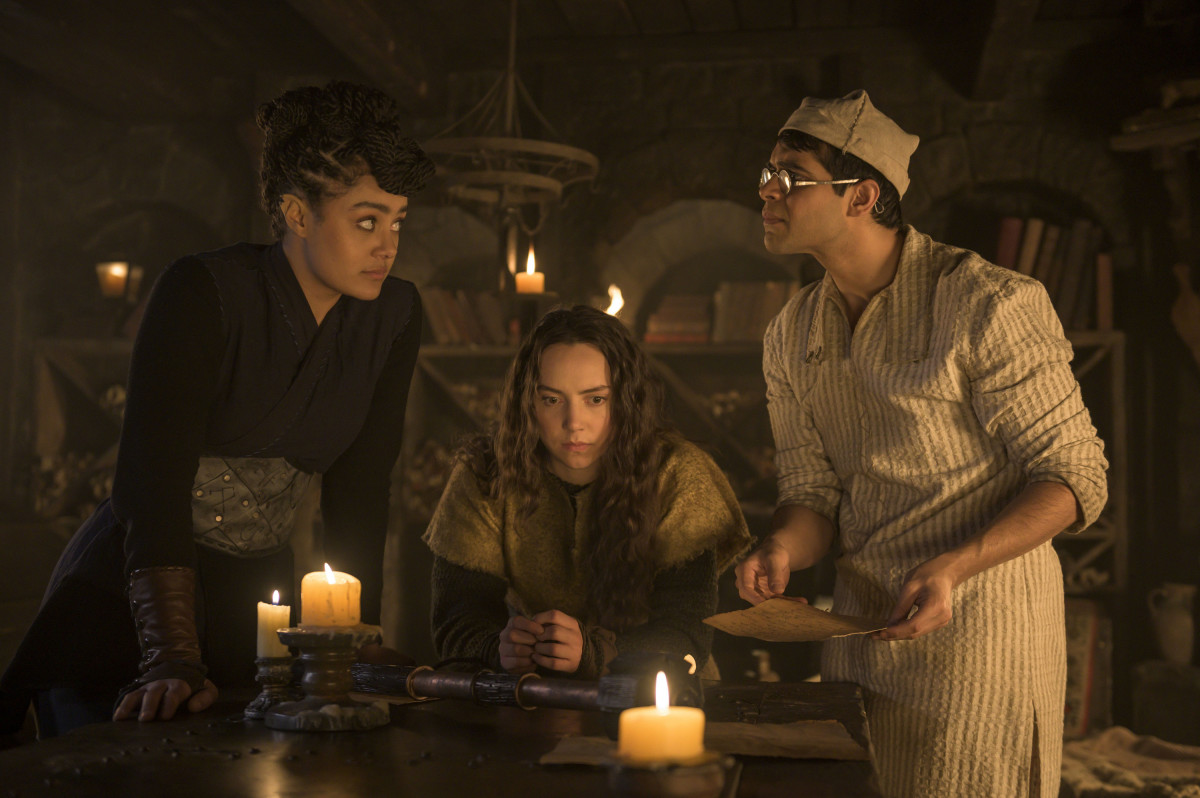 First the queen and now the king. That’s right, Tobin was killed in a valiant rescue of Talon and this time, it looks like he’s not coming back. That pile of ash that was Tobin sort of says “no more” resurrection for the noble lord. As noted above, you could kind of sense this one coming after the death of Falista in such a horrific way. Then, when he’s talking to Garret about having lost the only two women he’s ever loved, and having nothing left, it sounded very much like he was saying he had reached the end.

Tobin has been an interesting character from the outset. He came into the show a immature man-child, content only to drink, wench and…well, repeat. But he grew, as have all the characters of this show. He developed, he added layers and by the time we lose him at the hands of The Four (now The Five), he has grown into a noble lord, a fierce warrior and man that understands honor, integrity and whom he can trust — even if he disagrees with them. I thought Aaron Fontaine did a marvelous job of shepherding this character along and giving him a real vibrant persona after initially being kind of a caricature of a buffoonish prince, capable of only rudimentarily good moments thanks only to the guidance of Gertrusha.

This was a good character and one that will be missed, I’m sure. But hey, he got a second chance at life twice and died a hero’s death in freeing Talon from the clutches of the Masters, so in that moment, I think he was a man who no longer had nothing, but had given everything to a cause bigger than he could imagine. Hail, King Tobin. The Lord Aegisford is gone, but his deeds will not go unremembered. But remember this, it is clear that Showrunner Dean Devlin and his cast of writers are a danger to our cast. Nothing is out of bounds at this point. 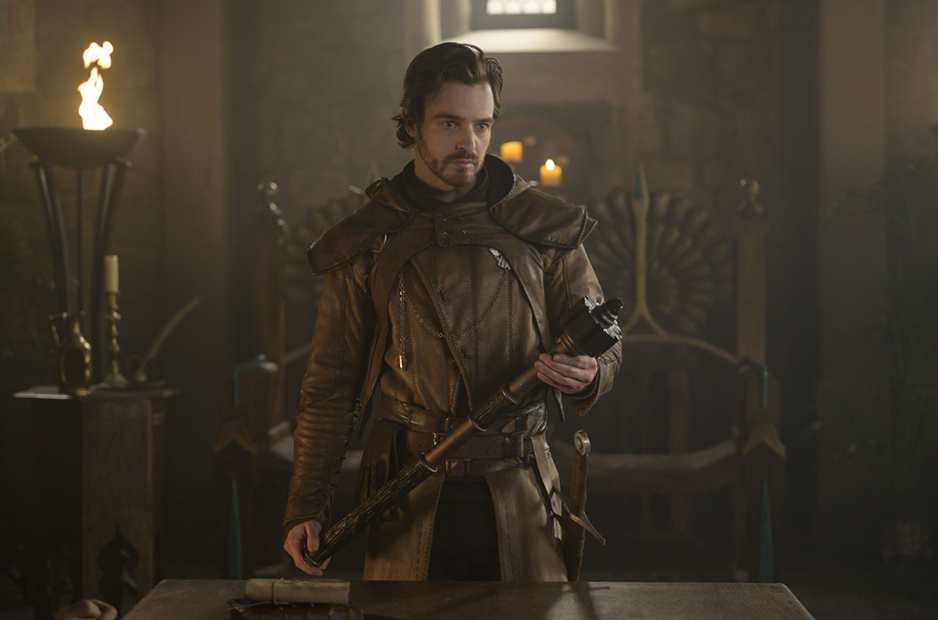 Slowly but surely, the Masters are acquiring the Kinjes. And that seems to be a slow walk toward dominating this world. Now, only Zed and Talon, whose Kinj seems to be of particular irritation to the Masters, are left. Talon’s Kinj is called the AsterKinj and this Aster entity seems to be the betrayer of their kind. I really suspect before we are done here we are going to circle back to the very first episode and discover how Talon’s mom acquired that Kinj.

This show has always been good at harkening back to moments or items of the past and I’m hoping that they take us full circle to that moment when mom passed the AsterKinj to Talon…and explain how she got it and why. That has always been one of my biggest questions about this show and now with the re-emergence of the Masters, I think it begs an explanation. Talon has a bigger part to play in this than I think she realizes as the bearer of the AsterKinj. What power does she have that she doesn’t realize?

I also think Luna does as well now that the Skevikor key is talking to her. Are those the thoughts of the Cavi that are cocooned within the chamber below the Outpost? Remember, there’s clearly a hive mind at work here and speaking of tie-ins from the past, we get a Yavalla reference and her parasite Kinj. A nice touch and one that, given what we learn, makes perfect sense. 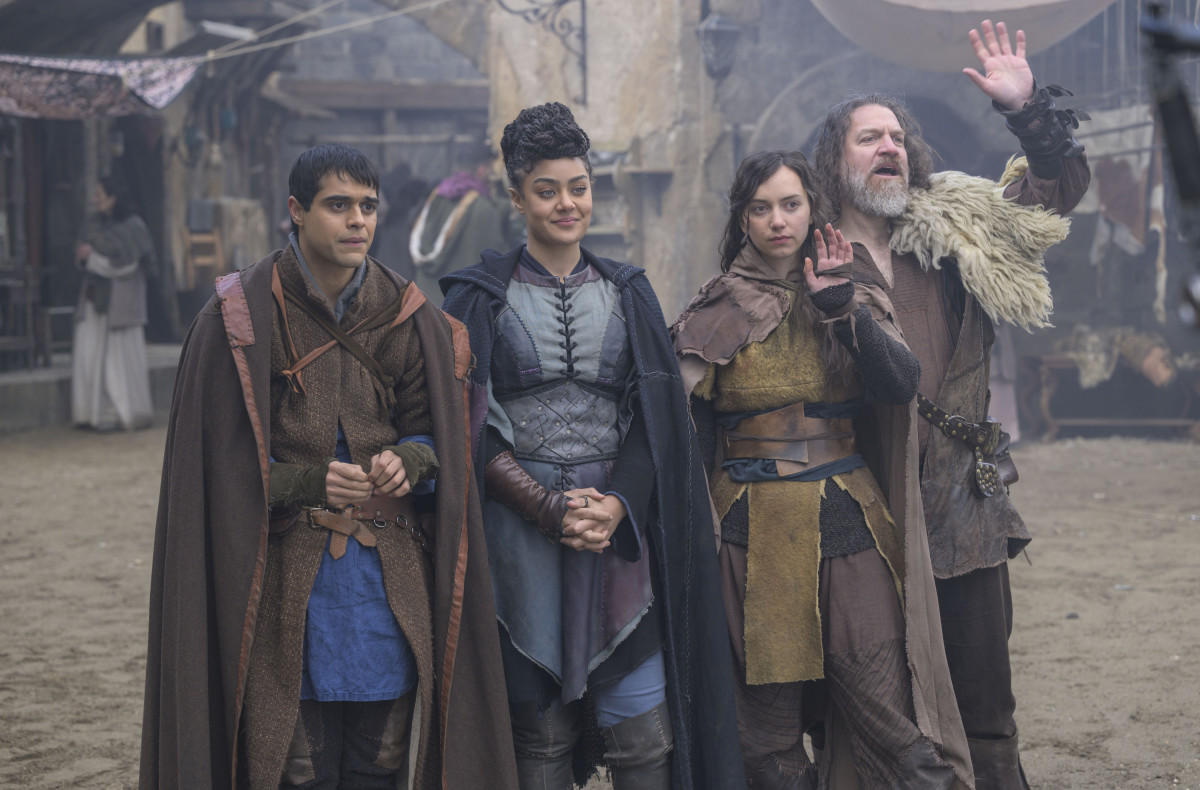 Luna has a key part to play in all this as a Dragman-in-training acolyte, right? She clearly has some of those skills, so she would seem to be a very important component in all this. I’m looking forward to seeing just what she brings to the party in the coming episodes. Aren’t you? The fact she can hear those voices, what does that mean? Interesting.

Well-deduced by Janzo that Vorta’s Kinj is capable of controlling the Cavi via that parasite Kinj we saw from Yavalla. And that, in the end, the Cavi are simply slaves to the Masters wishes. Interesting that we have reference to the Masters having devastated multiple worlds over thousands of years, right? They seem consumed with the desire to discover new worlds and destroy them. How did they get around, you ask? My guess is the Kinj Talon carries has a lot to do with that and this Aster entity betrayed them in some way to stop the carnage. But how did Talon’s mom get it? That is a mystery I’m dying to solve.

There were a couple parts of this episode I really enjoyed. The first was seeing Tobin, Zed and Garret together before Tobin went after Talon. Three warriors together, often in conflict with each other, but in that moment understanding the odds and the dangers. There was mutual respect from all three to all three and I liked that. I liked that a lot. I thought it showed that when warriors step in harm’s way, other warriors recognize what that takes and respond to it. And Aaron Fontaine, Jake Stormoen and Reece Ritchie just lent it an air of authenticity that I really responded to. 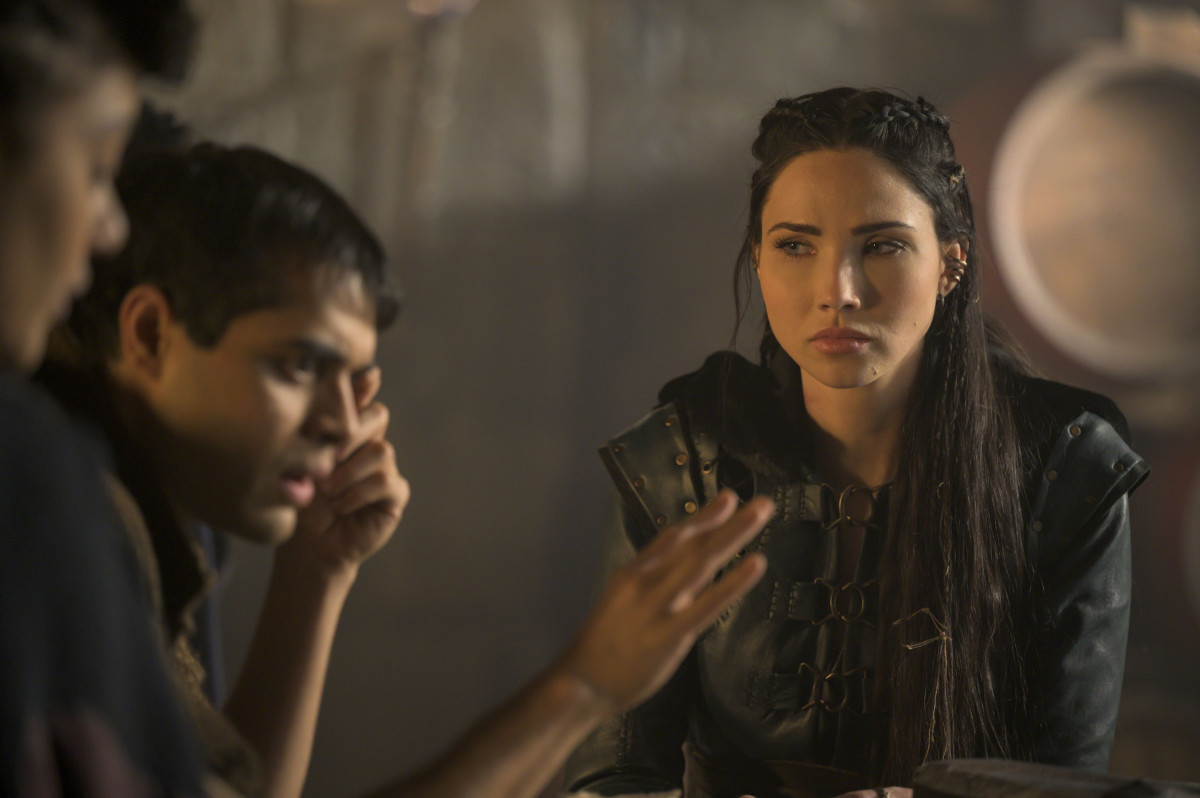 I also liked Zed’s moment of realization about who and what he is. Garret expresses doubt about whether he and Talon should be together as human and Blackblood and Zed, in what was a surprising little arc, dismisses his own words are foolish. He lets us in to his own world a bit, a world without anyone. Wren and Janzo are happy, so good for them. Garret and Talon are in love, so good for them. But Zed is clearly feeling the weight of loneliness at long last and has started to look on those relationship with a bit of envy and longing.

Again, Ritchie and Stormoen give us this wonderful little moment that perhaps calms Garret’s worries and pushes us a little closer to Zed’s own sadness. I really liked that scene and thought it was played very, very well. Zed has been so single-minded for so long that he’s now, apparently, feeling free to explore his own feelings a little more deeply. I like that.

Nice to see Amita Suman back as Naya, if even for a couple of episodes. Fun to watch Wren try to kind of come to grips with her weird initial relationship with Janzo. Enjoyed that little trip down memory lane. Now, if we could only get Gertrusha back for a brief spell? Again, this show pulls from the past so very well to inform the present. I like that aspect of the show. 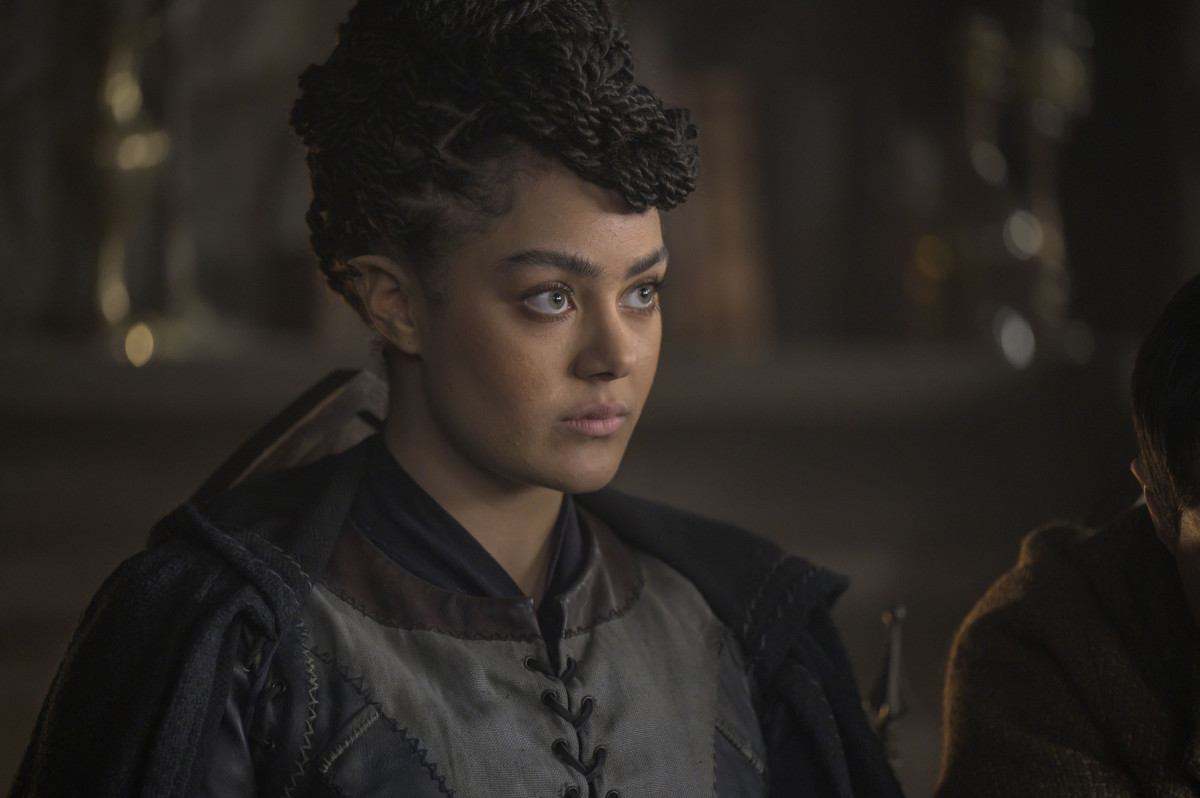 The 313-Janzo-Wren trio is pretty interesting, isn’t it? You can see Janzo and Wren are appalled at the Cavi’s lack of freewill and you can see their minds working through the issue. Destroying the key seems to no longer be an option, so it looks like a better understanding of the “minions” may, indeed, be a key to defeating the Masters when the battle is joined. And let’s be honest, there’s a battle coming. But what weapons will be in place? That’s the question. This is where I think Talon rises up and discovers powers she could never imagine.

It’s also fun to see Janzo, and to a lesser extent Wren, be somewhat subversive about things. Janzo wants to study, to probe, to learn and he isn’t above overtly or quietly defying Garret and Tobin’s wishes about the key. He’s a rascal, that one. Let’s hope that curiosity doesn’t end in disaster for everyone.

So, The Five have called to Zed that he’s next. I call that ominous stuff considering what has happened to the others. And I’m particularly worried now that he’s opened himself up to the possibilities that Nedra would seem to afford. By the way, Tamara Radovanovic is a delight as the sassy Nedra. She’s got Zed tied up a little bit emotionally, which is fun. The human clothing? Nice touch, Nedra.

Feels as though Zed has kind of let his heart open up a bit and it has softened him in the process. So I’m not really into him meeting The Five. Will 313 and his Cavi brethren arise as allies or enemies of the people of The Realm? Can Garret and friends keep that Novispore Kinj in Vorta’s arm and thereby deny the Masters the use of their slaves to destruction? Will we see Aster arise and be an ally in the end? Oh, the possibilities. We are headed to the homestretch of this fourth season of The Outpost and I suspect the surprises aren’t done coming. Hang on tight, my friends.