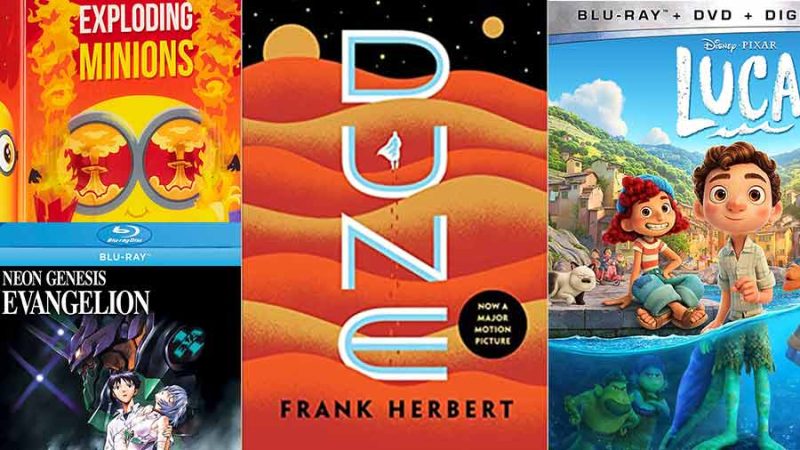 It’s that time of year where finding a gift for a loved one tends to be the most difficult thing you have to figure out. Combined with severe supply chain issues and delays related to the pandemic, and things are in short supply. We put together a list of items that will cater to that family member or friend who always gets you that ugly sweater or that bathroom night light for Christmas. Why not one-up them with a better gift that’s a little bit geeky and a whole lot of fun?

And as a special treat, several of our gift guide items will have giveaways where you will have a chance to win the featured item on our gift guide. Check out our recommendations below and then how to enter to win some of these items at the bottom of this post.

It should come as no surprise that with the release of the most recent adaptation of Dune, that the book would make our holiday list. Set on the desert planet Arrakis, Dune is the story of the boy Paul Atreides, heir to a noble family tasked with ruling an inhospitable world where the only thing of value is the “spice” melange, a drug capable of extending life and enhancing consciousness. Coveted across the known universe, melange is a prize worth killing for…

Strange Planet: The Sneaking, Hiding, Vibrating Creature.
Lifegiver has an exciting quest planned for Offspring! All day long, they use a journal, pen, and makeshift binoculars to observe a strange furry creature that sneaks, hides, and vibrates around their house. Hilarity ensues as the blue beings try to mimic this talented creature.

Note: This title was provided by the publisher for review and inclusion on our holiday gift guide list.

Recommended Collectibles (For All)

Pin collecting is a favorite pastime for many and a fun way to collect your favorite characters and franchises. FiGPiN (short for Figure Pin) takes that a step further. These highly detailed character pins also have an additional collectible feature in the App that allows you to amass collector power based on several aspects of the production of the pin: Lot, sequence, when you unlock it in the app.

From Anime, Gaming, TV and Film FiGPiN has all the licenses you could want. Plus they look great on display.

Note: This title was provided by Universal for review and inclusion on our holiday gift guide list and for our giveaway.

In 2015, Tokyo-3 is under attack from “Angels”, extraordinary beings that possess various special abilities. Multipurpose Humanoid Decisive Weapon Evangelion is the only method to counter these Angels, and Shinji Ikari is chosen as its pilot. The battle for the fate of humankind has begun. But exactly what are the Angels? What is destined for the young pilots? And what will become of humanity?

Note: This title (Standard Edition) was provided by GKIDS for review and inclusion on our holiday gift guide list and for our giveaway.

How do the Z Fighters countdown the holidays? They use this Funko 24-piece advent calendar. Filled with two dozen Pocket POP! figures, it’s bursting with power and intense emotions. We bet if you offer them some eggnog and cookies, they’ll agree to go caroling with you.

Academy Award winner Emma Stone (“La La Land”) stars in Disney’s “Cruella,” an all-new live-action feature film about the rebellious early days of one of cinemas most notorious â and notoriously fashionable â villains, the legendary Cruella de Vil. “Cruella,” which is set in 1970s London amidst the punk rock revolution, follows a young grifter named Estella, a clever and creative girl determined to make a name for herself with her designs. She befriends a pair of young thieves who appreciate her appetite for mischief, and together they are able to build a life for themselves on the London streets. One day, Estella’s flair for fashion catches the eye of the Baroness von Hellman, a fashion legend who is devastatingly chic and terrifyingly haute, played by two-time Oscar winner Emma Thompson (“Howards End,” “Sense & Sensibility”).

Shang-Chi and the Legend of the Ten Rings

Set in a seaside town on the Italian Riviera, Disney and Pixar’s LUCA is a coming-of-age story about a young boy experiencing an unforgettable summer. Luca shares his amazing adventures with his friend Alberto, but their fun is threatened by a deeply held secret: they’re sea monsters from a world below the water’s surface.

Raya and the Last Dragon

Walt Disney Animation Studios’ “Raya and the Last Dragon” travels to the fantasy world of Kumandra, where humans and dragons lived together in harmony long ago. But when an evil force threatened the land, the dragons sacrificed themselves to save humanity. Now, 500 years later, that same evil has returned and it’s up to a lone warrior, Raya, to track down the legendary last dragon to restore the fractured land and its divided people. However, along her journey, she’ll learn that it’ll take more than a dragon to save the worldâit’s going to take trust and teamwork as well. “Raya and the Last Dragon” features the voices of Kelly Marie Tran as Raya, a warrior whose wit is as sharp as her blade, and Awkwafina as the magical, mythical, self-deprecating dragon named Sisu. Characters also include a street-savvy 10-year-old entrepreneur named Boun, the formidable giant Tong and a thieving toddler Noi with her band of Ongis.

Why not make holiday shopping easier with some giveaways direct from this list? Check out the links below for ways to enter to win each of our sponsored items. We would like to thank Wunderkind PR, GKIDS, and Universal for sponsoring some of our giveaways. Additional items were provided by TiBS directly from our shop!