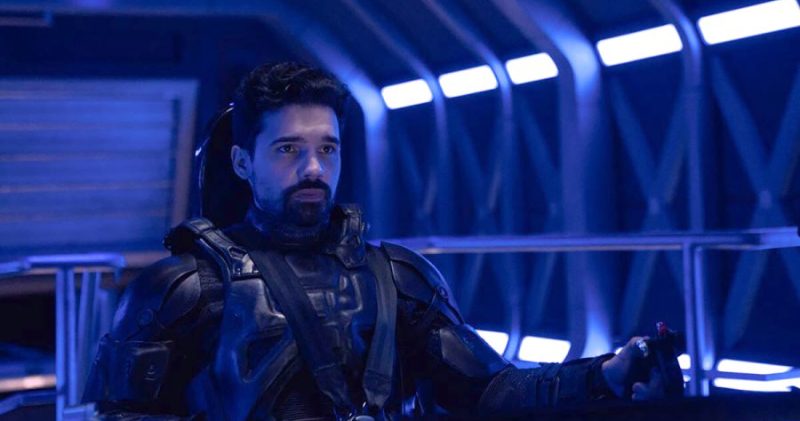 It’s hard not to get excited about the return of The Expanse, even as we realize that this is the final season – a season that will give us six episodes total. But while that little detail may offer a bit of a “downer,” seeing the crew of the Rocinante, even if it’s a slightly different crew, chase Marco Inaros and the rest of the Free Navy through the stars is simply too pleasant a sight to not enjoy to its fullest.

As of this writing, the first three episodes have dropped (every Friday) and the traits that make The Expanse such a powerful and complete sci-fi drama are still there, still grabbing us by the shoulders and shaking us, still showing us that this genre is alive and well and delivers emotional tautness with the best of them. My personal opinion is that, when the votes are tallied 20 years from now, The Expanse will be mentioned among the best sci-fi dramas to ever grace the screen. If episodes 1-3 in this, the final season are any indication, this show has lost none of its guts. And for that I’m delighted.

Be aware, some SPOILERS are in the mix.

Yes, Marco Inaros is rallying Belters to his cause, as well as some from the Martian Navy in a bold attempt to turn the tide in the relationship between Belters and the “Inners.” The stealth shielded rocks he threw at earth at the end of last season did their damage as he and his people broke away, but things have sort of settled down now as the Earthers have begun to have success shooting the incoming rocks out of the sky and the hunt for Inaros, and his plan, are in full swing. 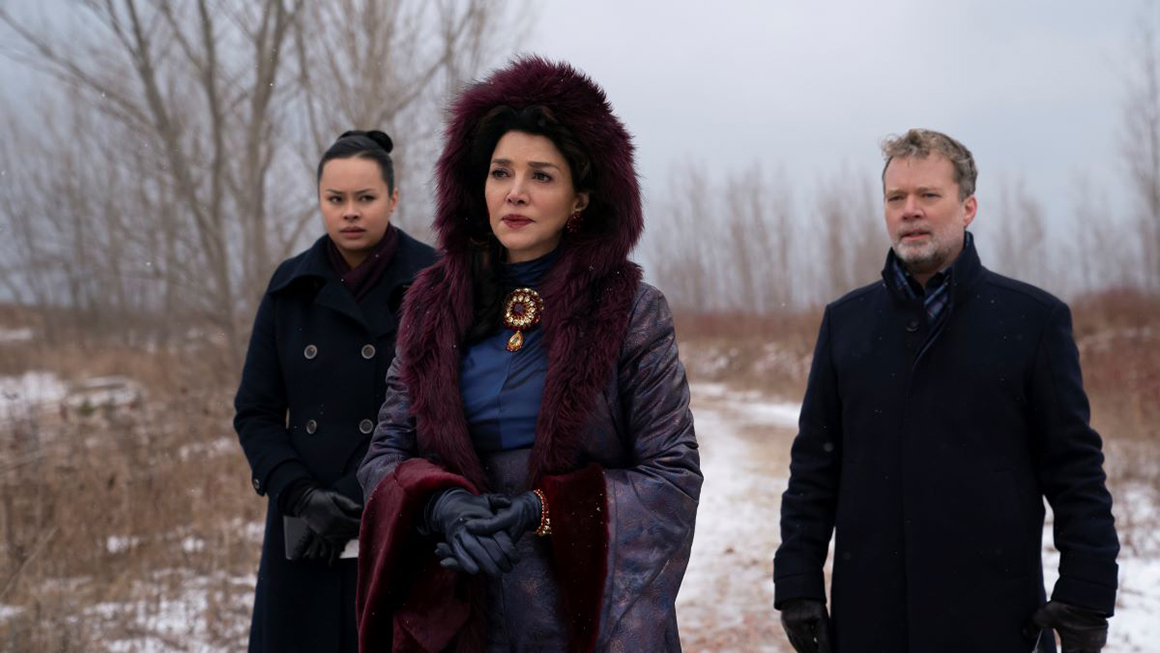 Let me say this about The Expanse – this show simply doesn’t miss when it adds new characters and Marco Inaros is a prime example of this. Keon Alexander does a fantastic job of projecting confidence and bravado, while occasionally letting uncertainty trickle to his eyes. Inaros is brash, bold, charismatic and has an agenda that he is passionate about. Alexander is simply fantastic in letting us see all of those elements. Inaros is also a crafty, long-term thinker who continues to demonstrate the ability to be dangerous in interesting situations. He abandons Ceres station after promising that it will be the capital of this new world he’s building. Why? To force those who are chasing him to have to deal with the refugees.

As newly re-installed Secretary Genearal Chrisjen Avasarala notes, the trap that Inaros set was that he knew she’d have no choice but to help the Belters left on the station. The trap, it seems, is time. And Inaros is so good at using time to his advantage. I can’t say enough about Alexander’s work in these first three episodes. He’s so damn clever, so very ruthless and he loves the adulation and the spotlight. There’s a real sense of trying to give the Belters something better blended with an ego that is soaked in this success. You wonder if that’s his Achilles heel, the need for adulation. Alexander gives it all to us and more. So damn good.

In the first three episodes, we see the Rocinante out on the hunt, looking for Inaros, or perhaps a way to get him. Alex is gone, and there are nice subtle moments when we see the crew feel the impact of his loss. Naomi is forced to fly the ship, something she didn’t have to do with Alex around. Amos finds a moment to reflect. Everyone feels the loss. But, there are some new faces aboard. Clarissa Mao (Nadine Nicole) has joined the ranks of the Rocinante, courtesy of Amos. She’s working to re-establish herself as something other than what she was before and it takes a few episodes, but she eventually earns the respect and trust of Holden. 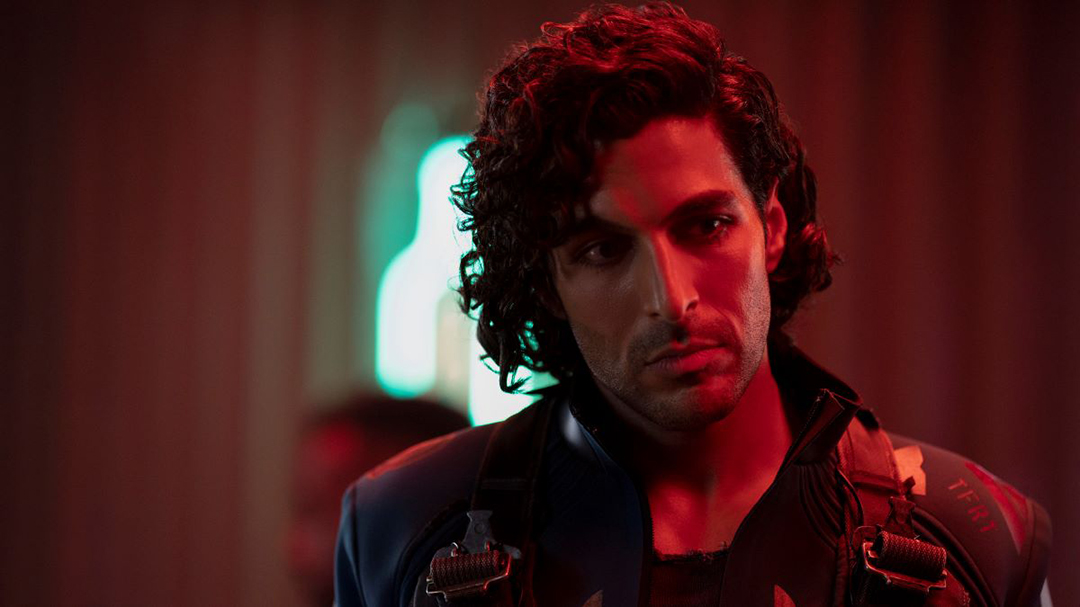 Also showing up is Bobbie Draper (Frankie Adams), who is sent directly from Avasarala on a special mission. It’s great to see the new faces and old, the chemistry that this show seems to have in such abundance. I’m a huge Draper fan and was delighted to see her show up. But she’s not the only one. Avasarala (Shohreh Agadashloo) is the tempermental, smart and sassy leader that we have loved from the show’s inception. I adore Agadashloo and the vibe she creates. Cara Gee returns as Camina Drummer, a savvy captain with plenty of smarts, guts and instinct that should serve her well as she hunts Inaros for her own reasons. Drummer is a fantastic character and Gee just embues her with a horde of qualities that grab hold.

So, let’s hunt Inaros. His ranks are swelling, but he’s also leaving some potential allies with bad tastes in their mouths. His heavy-handed tactics to force other Belter factions to his table seems to have backfired a bit as Drummer finds a certain level of support amongst other captains she’s run into. Additionally, his son Filip (Jasai Chase-Owens) seems to be struggling emotionally and trying to keep it under wraps with sex and drink. He accidentally kills a friend of his in a drunker rage and the subsequent cover-up seems to jolt him into a new realty, one where he sees his father a little clearer than before. Filip openly defied his father in episode 3 on the bridge of the ship, perhaps signaling a very telling change in relationship.

Naomi still hopes for reconciliation and in one of the shows most intense scenes thus far, watched in horror as Bobby fires a missile at the Inaros ship. It looked as though Inaros and Filip were about to die, something you can see in Naomi’s eyes, but Holden, sensing the importance of the moment to Naomi, quietly disables the warhead, allowing Inaros and his ships to slink away – with a safe Filip on board. 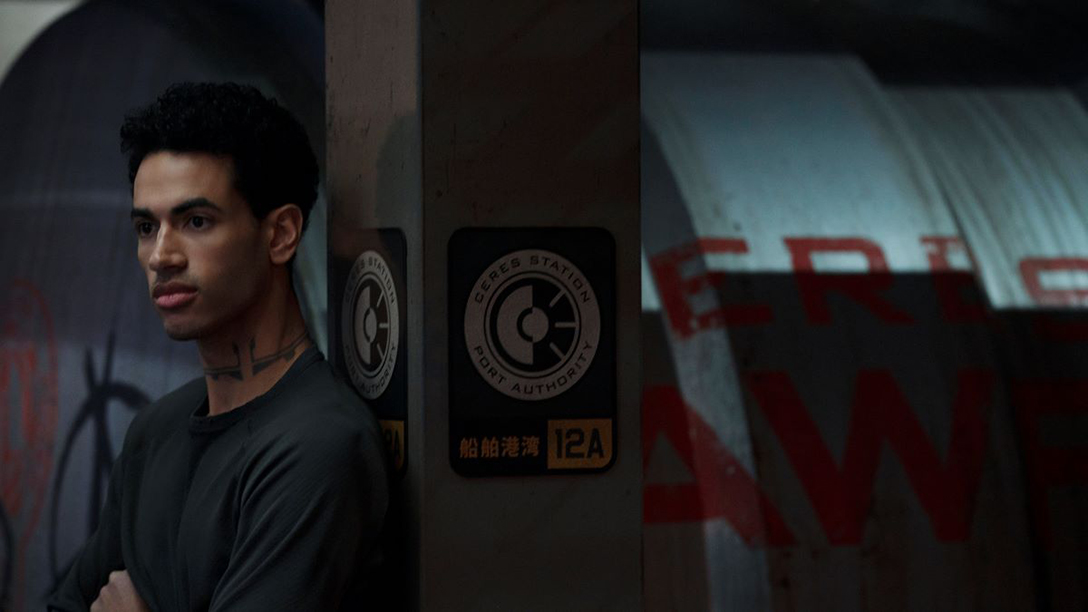 Yes, the first three episodes of this fantastic show’s final season have brought us up-close and personal with Inaros and the damage he’s inflicted, but it’s also allowed us to see some chinks in the armor, some possible avenues of failure that he may be facing in the future. His son seems to be rethinking his devotion to his father, Holden outflew and out-foxed him in a battle that Inaros just had to instigate, and Drummer would seem to be finding allies in strange places.

So that’s where we are three episodes in – setting the pieces of the board in motion. Inaros has a plan, a plan that is much larger than we can see right now, and would appear to have all the means necessary to fulfill that plan. But Holden and crew are hot on his trail and snagged a huge “win” when they took down his command and control ship for the stealth rocks, as well as other valuable information. Drummer is also in dogged pursuit and likely won’t be alone, as will the remainder of “inner” forces with Avasarala wanting a piece of Inaros as well

There’s a battle coming in the next three episodes and some pretty damn good sci-fi in the process. The Expanse has been a show that’s steadfastly pushed the barriers of what we think a space-based show is and can give. There’s the antagonist, the protagonists, plenty of suspense and tension, but there’s so much more. These last few episodes are a very welcome reminder of how well this genre of show can be produced when everyone wants it. The money, the tech, the writing, the characters, the vibe as a whole is superb.

Now, about those disappearing ships in that strange anomaly. Don’t worry, protomolecule, we haven’t forgotten about you. What part will you play in all this before it’s done? Can’t wait to find out. Can you?