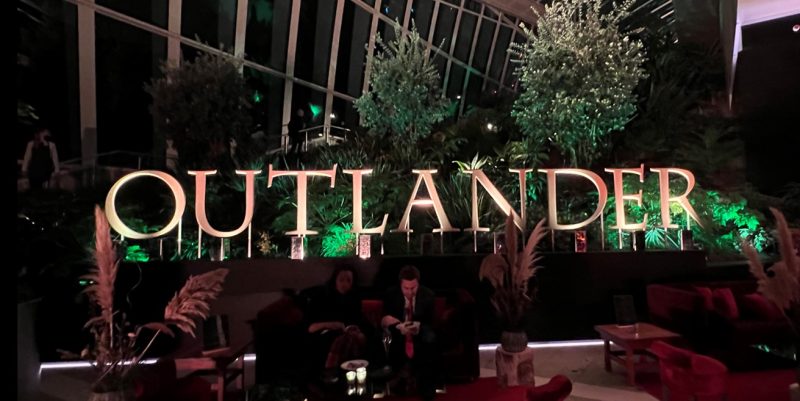 Season 6 is coming!! For the first time, Starz held a season premiere in London, and really did it up. Two of my close friends, Koko Pipkin and Samantha Kraupner, were in London to attend some plays that Outlander cast members were performing in, and agreed to become our correspondents on the premiere’s red carpet! We had some frantic hours writing questions and making arrangements, as the approval came through 36 hours before the event (and we were dealing with a hefty time difference). In all, they spoke to more than a dozen cast members. I’ve divided up their interviews into 3 posts – look for the other two coming soon.

Samantha reports from London:  “Happy it was in the UK this time since it is filmed here and was quite convenient for many of the actors as well as fans. (It was) Perhaps not as organized as events in LA (where premieres and such happen quite regularly) but everyone was super nice and helpful. Happy that Caitriona could participate virtually. Not possible to be in 2 places at once. We were very sad to hear some fans gave her a hard time about not being in London. Weather this week in England was fine – a bit chilly and some days a little windy – but nothing compared to the recent storms they had here.”

They had an invitation from Starz to the premiere, so the red carpet access was through Three If By Space. But their original invitation included the cast after party! “The after party was quite well done. We were thrilled to discover that the VIP invite tickets included the coveted gold wrist band. This wristband got you onto a double decker motor coach that whisked us to the event after the premiere. The facility was lovely – 35th floor with all glass walls and ceilings. So a great view of the city, although quite chilly. I think perhaps they picked this large airy venue because it was maybe easier to socially distance a bit and ensure air circulation with Covid and all? But I was happy that I snagged a scarf/ blanket that the venue was handing out early on. The Sassenach whisky was flowing freely and there was a ton of excellent food available as well. Music was loud (typical for these events) but people were able to mix and mingle and socialize. We got to speak to quite a few people, actors and their families, talent management, fellow fans. I resisted any urge to ask for any selfies with cast. In my mind it would have cheapened the experience a bit. But we did have some really nice casual conversations with many.”

As I mentioned, Sam and Koko had already planned to see several cast member plays while in London (on their way to the Outlander convention LandCon in Paris). ‘The plays we saw while in London in addition to the Premiere and Red Carpet on Thursday: 1. The Play That Goes Wrong  at the Duchess Theater. Euan Bennet  is a swing player in this show (personal note – this is the funniest show I think I’ve ever seen – it just ran in Chicago. If you get a chance to go, run for tickets). We will see him as Obadiah Henderson in Outlander in Season 6. Very funny show. Then, we saw The Night Larry Kramer Kissed Me – John Bell was absolutely phenomenal in the closing night performance of this one man play that ran most of February. Very powerful story and I really can’t find the right words to describe just how excellent John was. Truly a moving performance. Love it!”

They’ll also see Instructions for a Teenage Armageddon – “tomorrow we go to this one – Rosie Day (Mary Hawkins) will star in her debut play at the Southwark Playhouse next year. It began previews on 9 February, with an opening night on 10 February and performances to 5 March. The show questions how young women grow up in today’s society, as they try to forge their own paths.” Sam and Koko will also see Cirq du Soleil!

Here’s Part 1 of their cast interviews – talking with Jessica Reynolds, Alex Vlahos, Alastair Findlay, Steven Cree, Joanne Thomson and Paul Gorman. Look for Part 2, with Maril Davis, Lauren Lyle, and Catriona and Sam! Part 3, 3, later this week, is a little bit of fun with several of the cast members.

Koko Pipkin is an Outlander event producer/organizer and has been producing events with Outlander cast and consultant since 2015. She recently hosted the trivia portion of the Virtual Release Party for Diana Gabaldon’s “Go Tell the Bees that I am Gone” Book 9 publication. She is an occasional contributor to the Three if by Space radio talk show “The Gab” and an ardent convention attendee. Koko lives in the Seattle area of Washington state.

Samantha Kraupner is a frequent contributor to Three If By Space as an event photographer as well as an occasional guest writer. She is also a co-hosts for the Outlander Gab, threeifbyspace.net’s internet radio show. You can see more of her photos from past fandom events on her Instagram page: @SamKraupner.