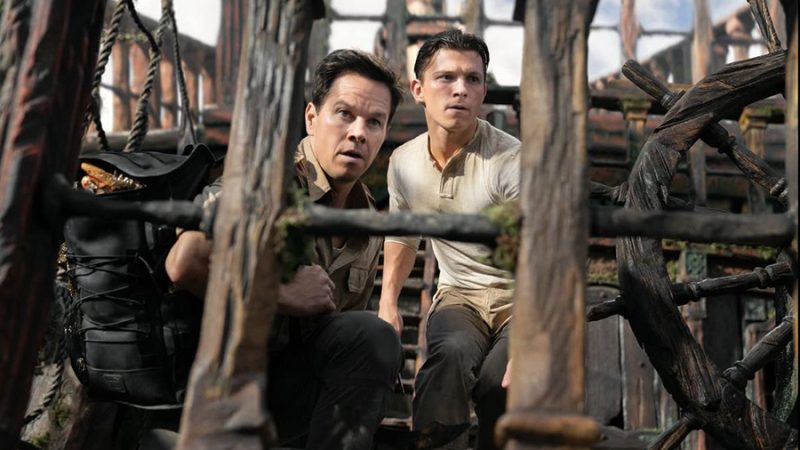 As far as video game movies go, it’s not uncommon for people to have major concerns about them existing. We’ve seen some pretty awful video game-to-movie adaptations over the years, so going into these things people are automatically going to be a bit jaded. That was definitely the case when it came to Uncharted. There was a lot of concern about the casting of the two main characters. It’s hard to get the right person to play someone as beloved as Nathan Drake (Nate) and even Tom Holland couldn’t stave off some people’s fears. The whole Mark Wahlberg as Victor Sullivan (Sully) thing was another thing that got people’s alarm bells going.

For me, I think I started to be happy about Drake’s casting when Nolan North gave him his blessing and even more so when Holland told the world that he was the reason this movie was happening. How freaking awesome is it that Holland played the Uncharted games and then told Sony that an Uncharted movie needed to happen?!

As a fan of backseat gaming, I have never personally played the Uncharted games (well, until I got home and started the first one last night after the movie). I’ve watched my husband play it, my friends play, I watched Nolan North’s playthrough of the first game so needless to say, I am absolutely familiar with the story and the aesthetic of the Uncharted world. The movie didn’t really feel like Uncharted to me. There were times when I really forgot that I was watching “Uncharted” and thought I was just watching a typical action-adventure film. The filmography was great, it was a really pretty movie and there were some awesome effects, but it just felt like every other movie out there right now. Maybe we’re just being inundated with movies that have the same kind of premise, but it didn’t stand out much.

Holland as Nate really felt okay. It wasn’t spectacular and it wasn’t awful. He was charming and witty and made a pretty decent “Baby Drake” (as I’m calling him). I like that he trained a lot for this role and I also really like that he was extremely familiar with Uncharted. There were a few Nate-like quips throughout the movie, but not enough for the true Nate that everyone knows and loves.

What I didn’t particularly care for was Wahlberg as Sully. I was really nervous about that casting choice to begin with, but once again Holland vouching for the relationship between Nate and Sully staying true to the games really got my hopes up. To me, Wahlberg didn’t really feel like Sully. He felt like he was just playing himself. Sure, some of the qualities were there, but it just didn’t feel right. I know this was a prequel to how they are in the first game, so maybe with the second movie, they’ll grow into their roles and the actual characters more.

Now, Chloe. Chloe was perfect! She looked perfect, acted perfect, she was perfect! I really loved everything she brought to the film. It was great to see her come to life and actually feel true to the character. The other actors were also amazing. Tati Gabrielle brought such classy venom to the screen and was definitely not someone you’d want to mess with. Her henchmen, Pingi Moli and Steven Waddington, were such good supporting actors, and also the humor the Scottsman brought was just right. Of course, Antonio Banderas was a perfect gentleman villain and I loved his character!

Now, some moments throughout the film did make me giddy! These were really all thanks to the cinematography of the whole thing! I loved the moments where Nate was showing his ridiculous strength, but the one that really stands out was in the cave. When he was holding on to the cannon, the camera was facing his profile so we could see him really grab onto the cannon. From there the camera moved to face his back and zoomed out so you could see him scale the side of the ship, just like when he does this in the game! That moment brought me back to the movie’s roots and made me smile.

There was another moment when Sully and Nate jumped down on the ship and the camera zoomed in on Nate’s back. It was positioned in just a way that felt like third person and Sully was in the frame just enough you could tell he was there to help. The camera then zoomed out staying positioned behind Nate but also angled up in just a way you could see the enemies below. One of the bad guys was even doing that weird head scratch thing enemies tend to do when they’re just standing there. Absolutely incredible shot!

There were a few more very video game-esque scenes, like Nate jumping onto the chandelier and a scene where he was fumbling with a wall that felt like a quick time event and I think these moments really did justice to the source material. 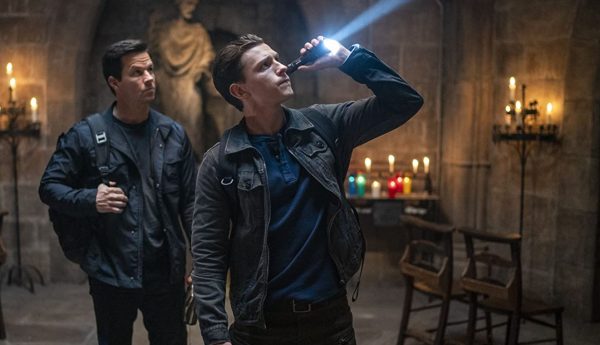 The story overall was pretty decent. It’s a typical treasure hunt “Indiana Jones” feel, but that’s pretty much exactly what the Uncharted games are. The slow transition that Holland took throughout the movie was another thing I thought they did really well. At the beginning of the hunt he didn’t look much like Nate, but by the end, the Nate on the screen was the spitting image of the Nate in the game. From the white henley shirt to the khaki pants and the gun holster around his shoulders, he pretty much butterflied into the Nate we know and love. It was really fun to see and I actually can’t wait for the sequel to see where he goes from here.

I hope Wahlberg steps up his Sully game and things become more solid with him. The ‘stache at the end was cute, but we knew it was coming so it wasn’t really all that big of a deal. I like their banter and friendship, but I really want more!

I think this movie is a solid 7/10 (though that doesn’t really mean much since those numbers are all arbitrary) and overall am looking forward to seeing where they go next. Oh yeah, that cameo was absolutely hilarious, but they really could have added in one line to make it perfect! Also, the “Naughty Dog” sticker in Nate’s case was really cute too!