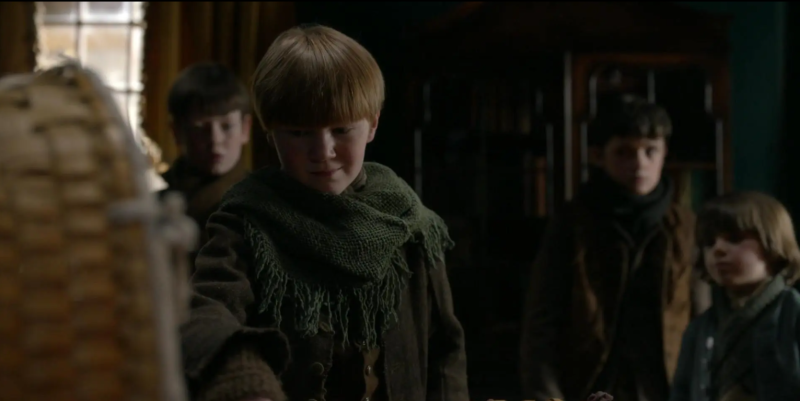 Before the season started, we heard from Diana and from a few of the cast members that this would be an excellent, powerful season. Three episodes in – and while I had my quibbles with the first one, the only thing I really wanted to say about this one, episode 603, was that I loved it, it’s one of my favorites of the entire show, probably in my top 3. Of course, when the episodes follow the books this closely, you can’t help but have a fantastic outing. But under advice from counsel – er, my co-hosts from our radio show, The Gab (scroll to the end for more info), I’ve been advised to expand and expound.

So, since this week has been very hectic – not difficult, but it has been exciting and a lot of work (we’re FINALLY able to make plans to go to New Zealand to visit our son and our tiny grandsons, so I spent HOURS trying to make plane reservations), I am going to give you my thoughts on the highlights of this terrific episode. But I won’t be surprised if they’re the same as your favorites.

First, WOW and all accolades to go to Cesar Domboy. Fergus has been an underused and underdeveloped character in the show. He’s been in the background, except for a few notable moments (his wedding, for one), but this episode catapulted him into the forefront. You can tell that Cesar has just been impatiently waiting for a chance to show us the strength of his talent – and here it is. Several heart breaking scenes culminated in a suicide attempt, as Fergus finally hit the bottom of his self-loathing and despair. Unable to care for his family, relegated by his disability to a secondary position in his family (he believes), he thinks that his wife and children will be better off without him. His feeling of uselessness has been emphasized by the boys who believe that baby Henri-Christian is a demon and float him down the river. By Jamie and Roger handling the discipline of the boys (does anyone else think that the better course would have been for Roger to say, “Do you want me to go with you, Fergus, talk to the boys?”). By Marsali’s insistence that he stop drinking. And by her confession that she killed Lionel – that he literally wasn’t the one who protected his family. And then he was humiliated by the self-righteous MacGregors at Quarter Day, and humiliated himself by lashing out. He sees these strong, WHOLE men around him, farming, taking care of their families, and doesn’t believe he measures up.

Fergus has seen the fate of children like Henri-Christian, and knows that the prejudices and fears of the people on the Ridge, his family notwithstanding, can make life very hard for his baby son. Claire can assure him that they won’t allow anyone to take the child off to a brothel, or use him for ill intent – but they can’t protect him for his entire life. How impossible that must be for Fergus! His self-doubt has another root – going back to Lallybroch. The environment there was insulated, especially after Culloden, and as a young boy gravely injured in the service of the family’s beloved Laird, I can imagine that he was somewhat petted and comforted. I’m sure he did his share of work, but he had no true responsibilities, like a wife and child. Jenny and Ian were the adults in charge, and while there was likely nothing soft about them, and life would have been far from easy, the family’s survival was not on his shoulders. Now, though, he faces adult responsibilities, people with vastly different – and very judgey – viewpoints, and significant danger. He isn’t equipped emotionally to handle this. 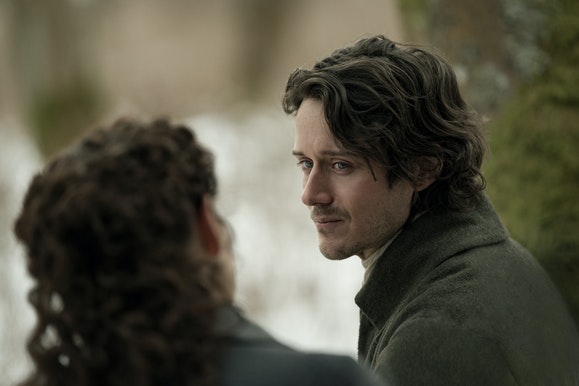 But Jamie knows that the worth of a man is so much more, and refuses to allow him to wallow in the self pity. “You kept this family together while I was at Ardsmuir. You helped me in my print shop when I was grieving for Claire. Wi’ this one hand, you made some of the finest whisky that ever passed my lips. You will do it again. You’re the only one who can show your son what a ‘useless’ man like you can achieve and how proud he can make his father,” he tells Fergus. Of course, as the only father Fergus has ever known, what he’s really saying is “I’m proud of you, I love you, I believe in you, I need you, as does your wife and your family.” And somehow, Fergus hears it. Cesar, who has had very little chance to stretch, completely blew me away. 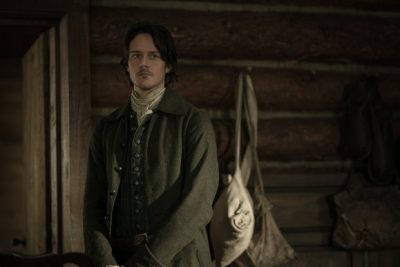 Roger has long been one of my favorite characters – in the books. The show has turned him around, made him much less than we know him to be. But I think the change in the writing staff this season has helped our Roger finally find his voice and his true nature. He’s a little lighter, a lot more focused, definitely committed to staying in the 18th century. Confronting the young hooligans, products of their parents’ prejudices and beliefs, Roger brings down the wrath of God and the love of man. The on-the-spot baptism is a ceremony these children would be familiar with. “Hear that? His name’s CHRISTIAN. He belongs to the Lord. Ye trouble him again and Satan’ll pop up and drag you straight down screaming to HELL!” Of course, Hell is a concept that’s alive and well in their homes. 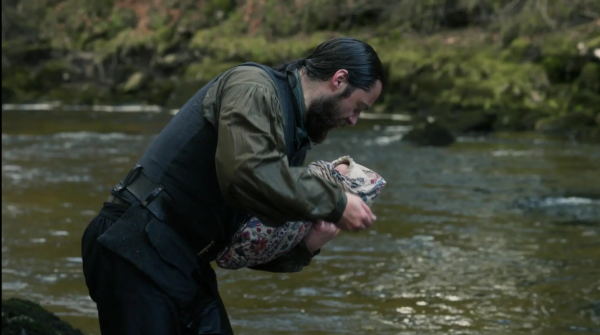 Immediate fright and rescue over though, Roger’s understanding of boyish curiosity and limit-testing resurfaces, and he tells Germain he’ll accompany him to find the boys and bring them the message that they are due in Mr. Fraser’s study. He’s gentle but firm with Aidan – which leads to one of my favorite 2-second scenes, the bullfrog in the milk. Did you all jump when Roger did? Yep, then I laughed hysterically, probably more than I should have. 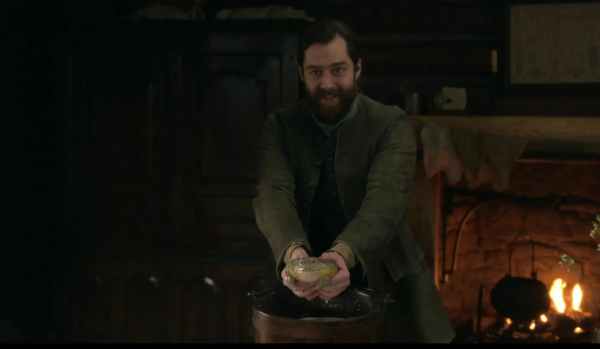 Roger’s sermon, obviously directed to the boys, but with a message for the entire tight-assed community of fisherfolk, was classic book Roger. I really hope this Roger – coming into his own faith, confident in his ability to survive and manage in this alien world – continues. I do think his throat problems from the hanging were abandoned too quickly, but I realize it’s difficult to do some things consistently on screen, and much easier in a book.

And my last major focus is Tom Christie. He’s a fascinating character – he walks the straight and narrow path, but has his own personal demon  that leads him to beat his daughter for her sins, real or imagined, past, present or future (loved what Malva told Ian, that Tom told her that to avoid the fiery pits of hell, she had to “eat well and don’t die”). He reluctantly admires Jamie, as a leader, and as a man, and envies him for his intellect, the devotion given to him, and ultimately, for having the love of a bright, beautiful, caring woman like Claire. Tom tries to apologize to Claire for not being able to hold still while she cut into his hand, and tosses out that he was sure Jamie had been quiet – mistaking him for Superman, I think.

Tom asks why Jamie helped him through the operation – “His presence here today – does he think I am one of his men? Because I assure you, I am not.” He isn’t – because Jamie is stronger than he is, braver, more beloved, younger, better looking, dedicated to those around  him – everything Tom would like to be. All Tom really has is his devotion to God – and for Tom, that will have to be enough. Mark Lewis Jones is terrific in this role – gruff, grudging, sanctimonious, but willing to make some admission and give some ground, if not much.

Vrooms!! I loved Lauren Lyle’s beautifully rolled rrrrr’s. I had the opportunity to see her in January at the Outlandish Vancouver event, and told her I thought she was the single best casting choice in the show (yeah, you all have your own opinions), and I haven’t changed my mind. Her confession to Fergus about killing Lionel was award-worthy. 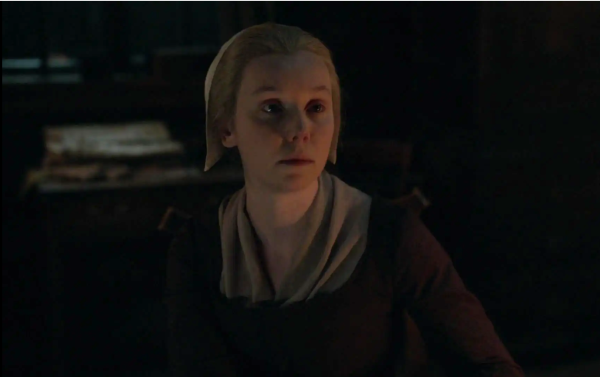 Jamie’s little chat with the errant boys, insisting that they either touch Henri-Christian or the hot poker, was a lesson they’ll never forget. And Germain will take this to heart – “Henri-Christian also belongs to you, Germain. He’s your wee brother. He needs your protection. Do  ye understand?” And absolution given in the form of bread and honey shows you can temper punishment with forgiveness. 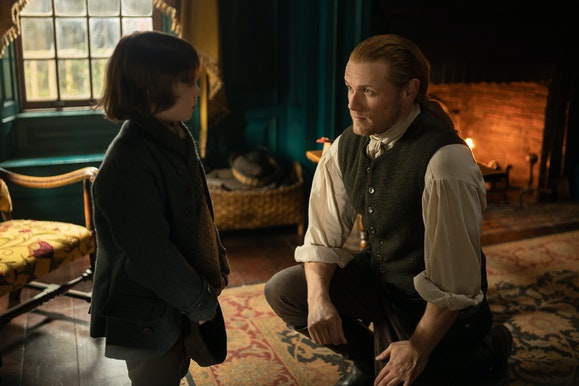 I LOVED Lizzie flirting with the Beardsley brothers. It just tickles me, knowing what’s coming, that this young girl doesn’t recognize – or care, at least – that she’s running down a, ummmm, non-standard path. You go, girl. And boys. 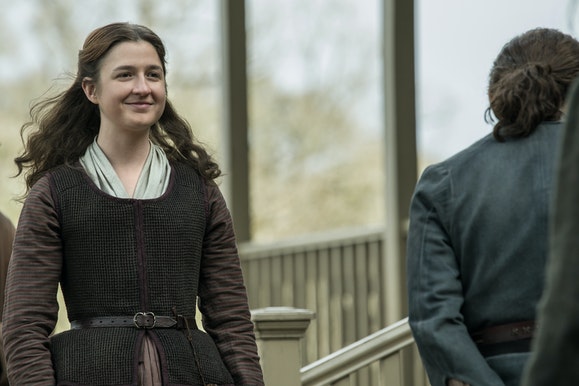 NEXT WEEK: Don’t miss it. Do NOT miss it. The hit streak for the season continues. Kleenex, a stiff dram, and a nap in the afternoon before the midnight showing will help.

TUESDAY NIGHT – Join us for the Outlander Gab! Our radio show is going strong, chatting about the episode and anything else that comes along. And we’re not above bribing  you to listen – anyone calling in and chatting with us on the air will get a P4 Brianna official promo trading card! 9 pm eastern/8 central/6 Pacific. Click here to listen and get our call-in phone number. You can catch all of our previous episodes at the same link!