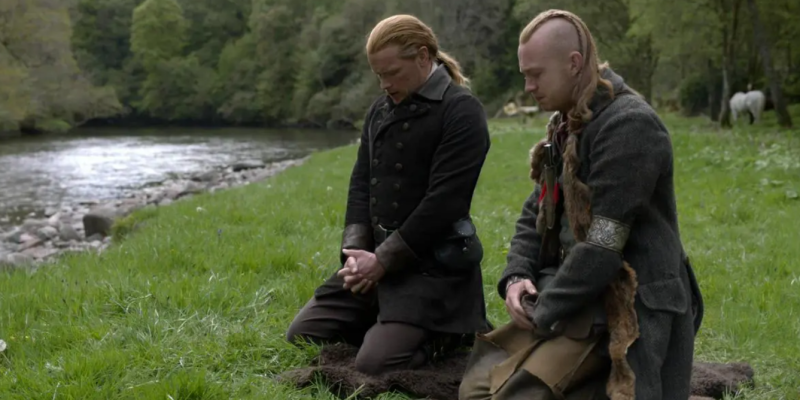 I often look for a theme in Outlander episodes. In this one, a theme jumped out at me immediately – sin and redemption. But not in the way you might think of – those redeemed have not sinned, and the sinners are not redeemed. This episode was terrific! Ian’s story was strong and important. Jamie’s journey to complete belief in the necessity of American revolution finally has a resolution. And oh, Malva!!

Since Ian’s return to the Ridge in Season 5, it’s obvious that he’s been a tortured soul. He’s attempted suicide, mooned and moped around, and let out only bits of what he went through with the Mohawk. Last episode, he confessed to Marsali that he had a child; Jamie overheard, but knew nothing more. He also began a bit of a return to the world with a little interest in pretty, flirtatious Malva, a young woman who seemingly could bring any man back to life.

But his trip to bring guns to the Snowbird Cherokee with Jamie sets him back when figures from his past, and one in particular, show up unexpectedly – Kaheroton, his Mohawk brother-turned-rival, appears in the camp. (It was a joy to see Braeden Clarke return in this role!) Ian’s story began joyfully, when the young woman who had caught his eye returned the glance. As Kaheroton told him, “We don’t choose, they do,” and she did, and we were glad for him! As Ian, now Wolf’s Brother, had proved his worth, the tribe accepted him and had no trouble with this new relationship – until “Emily” miscarried not once, but twice. 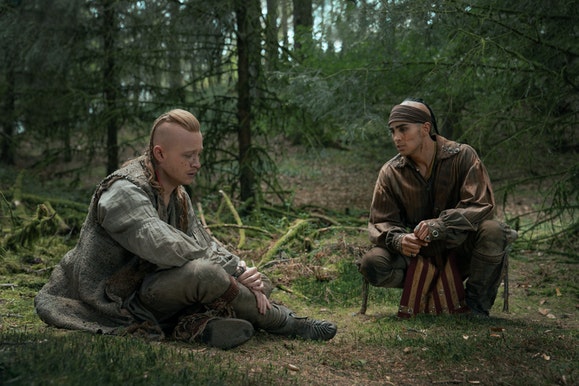 Ian’s love for Emily was beautifully done; John Bell’s portrayal of Ian’s joy, fear and sorrow were excellent. We could see him mature almost overnight from a young puppy to an adult with worries and crushing cares. John has really grown as an actor as he’s reached his own adulthood – when he started on Outlander, he was not quite into his 20s. The love scene between Ian and Emily was a bit awkward, I thought, but this might be my own issue, and not one with the production or acting. While this isn’t Ian’s first sex scene – remember the barmaid in season 3? – this was graphic, and almost felt like it was included in the season to “make up” for less graphic Jamie and Claire scenes this year. Or, it could be that I’m just getting more sensitive as I get older…. 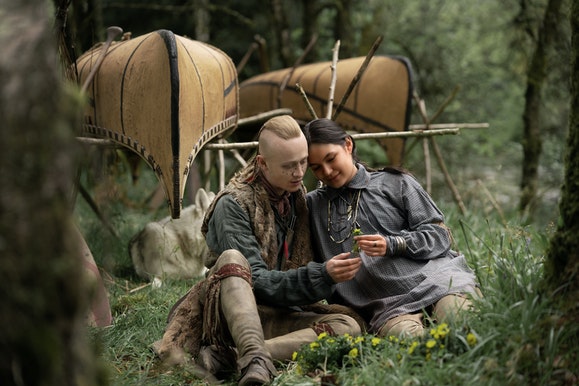 But Ian’s confrontation with Kaheroton over his marriage to Emily after Ian was forced to leave the tribe sets him off on a spiral of guilt and worry over the soul of his lost daughter. Will she wander in limbo forever, unbaptized? Redemption comes slowly, and his Uncle Jamie’s own experience helps. I’ve watched the episode several times now, and when Jamie gets on his knees with Ian to pray and ask the long-lost Faith to watch out for Iseabail, I’ve cried every time. Faith has been mentioned just a few times in the series, and the scene of Jamie’s grief was only included in the deleted scenes on the DVD version of season 2. To see that it still hurts his heart, and to see him channel that grief to help his much-loved nephew was beautiful. Ian’s heart must be a bit lighter to believe that the daughter he never held will have someone to hold her.

I just know Iseabaìl and Faith found each other. ❤️ #Outlander pic.twitter.com/UGAUc9TqjC

HIs small effort toward reconciliation with Kaheroton and acceptance of his marriage to Emily are a good step in healing. The duel with Scotchee, while not quite comic relief, lightened up the episode, and showed that Ian’s arguments with Kaheroton weren’t going to keep him from defending his former brother. Hopefully Ian can move forward, never forgetting, but opening up to the possibility of loving again. Let’s hope it’s not with Malva, though. 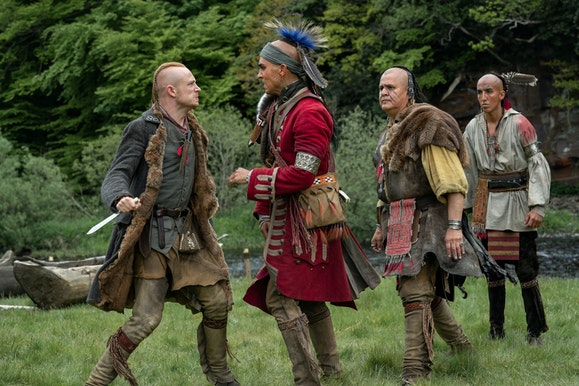 And finally, when Ian tells Jamie that he wasn’t sure who he was, Ian Murray or Wolf’s Brother, Jamie’s answer was beautiful. “Call yourself whatever you want,” he said, “I’ve been known by many names. What matters is who you are in here.” 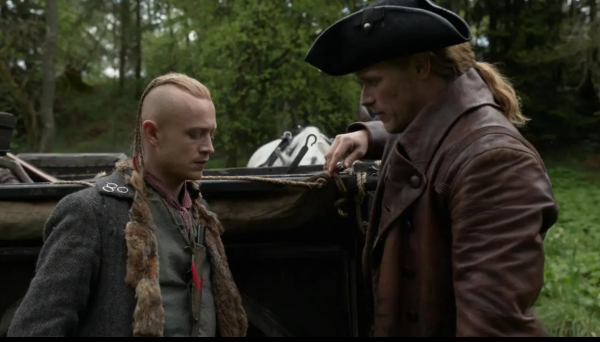 Jamie never seems to get off that tightrope, does he! Jamie’s story here was redemption of a sort – he’s making the final step toward putting two feet together in the cause of liberty, rather than straddling the line as both Indian agent for the crown and subversive agent of the rebels. Brianna’s information about the death of thousands of Indians, people Jamie has come to know and admire, is the tipping point. He’s seen what happens when a government decides that a group of people doesn’t belong in their own homeland, and he’s not willing to be a part of that, even if it’s years down the road. He knows that the seeds of trouble begin to sprout before any other signs can be seen. 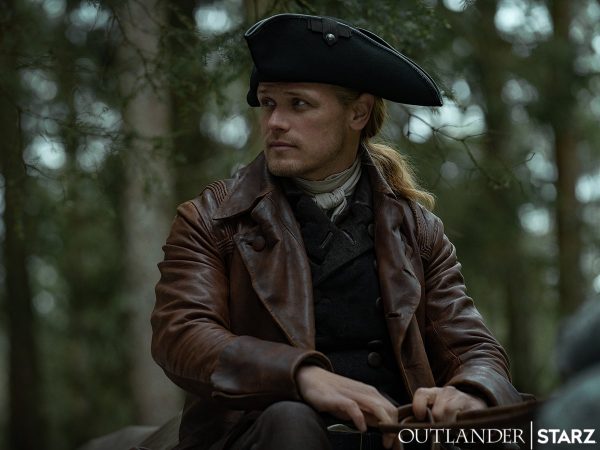 Admittedly, I haven’t read book 6, A Breath of Snow and Ashes, for a couple of years, so my memories of what was in the books and what wasn’t is spotty. I honestly don’t remember if Jamie’s warning to Chief Bird about the not-too-distant future was in the book, but I really liked that scene. Telling the Chief to warn his descendants to hide when the time comes may not save them, but if they continue to pass it down, and it’s heeded, it’s more help than nothing, at least for a small group. “This wife you have, did you pay a great deal for her?” “She cost me almost everything I had. She was worth it,” Jamie answers. 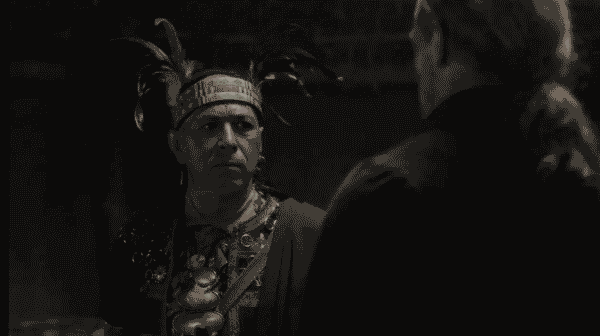 If this was a later century, nothing Malva has done – up until, and maybe including this episode – would be really concerning. But with the restrictions on women in the 18th century, EVERYTHING she does rings warning bells. Her walk home with Ian in the previous episode, the mild flirtation with Josiah during the ether experiment – well, maybe…. maybe she’s just a flirt. 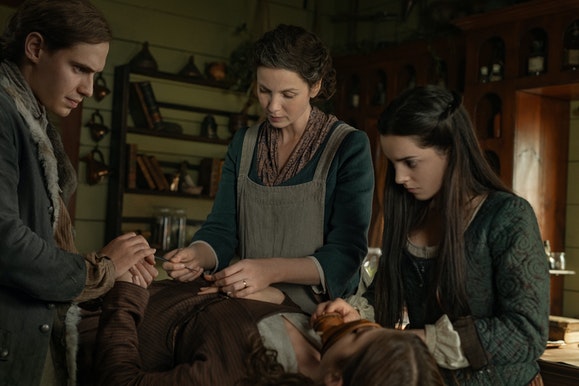 But oh, Malva…. you’ve asked Claire if women really like sex. And then you SPY! A child’s curiosity is one thing, but she’s no longer a child. Jessica Reynolds is KILLING IT.  And – that’s all I’m going to say about that, for those that haven’t read the books. 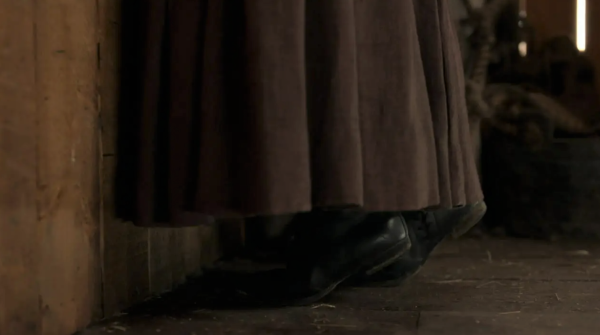 What did you think about this episode? Are you glad they gave Claire’s ether dependency a break? Leave a comment below or show me what you thought of the episode and this review with an emoji!

TUESDAY NIGHTS – The Outlander Gab on the Air! Internet radio to chat about Outlander, events, news, and whatever we feel like! Call in and talk with us! 9 pm eastern/8 central/6 pacific. Click here to listen and get our call-in number!

And – come play with other Outlander fans on Facebook! Check us out at Outlandishly Three If By Space.