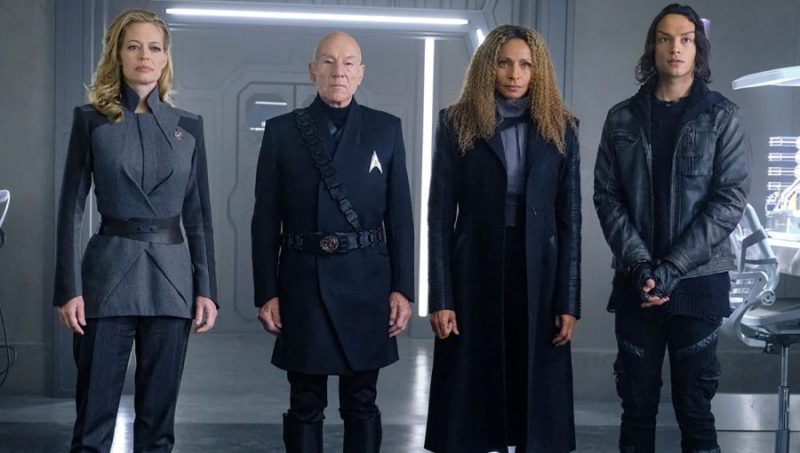 Star Trek: Picard – Gang To Travel Back To Repair An Alternate Future – Review, 202

Clearly, when an alternate reality includes a brutal, totalitarian regime that puts down dissent and rebellion with malevolent, violent glee, the phrase “Eradication Day” has more than a hint of darkness attached to it.

In episode 2 of season 2 of Star Trek: Picard, Jean-Luc and his crew wake up in a Q-instituted nightmare, assuming some interesting duties in something called the “Confederation,” which espouses human dominance of the galaxy and has no compunction about annihilating other species in that pursuit. How do we know that? Simple, Q shows Picard the admiral’s trophy room, which includes the skulls of Gul Ducat, General Martok, and Sarak. It’s a nice call-back to classic Trek characters, but also sets the tone for this new reality and Picard’s place in it.

It would seem that Jean-Luc has built a massive career on the corpses of other species, a realization that must have left him reeling in the realization that he is now walking the halls of power for an organization that seems to be the antithesis of the Federation he so believed in. In this episode, titled “Penance,” Q makes it clear that this test is about pulling Picard out of the bubble he’s created for himself. He makes a remark about penance for something Picard had done long ago and looks the admiral in the eye and says that he knows what he’s talking about.

Clearly, there’s something inside Picard that he’s buried, that he’s left untended and Q is determined to pull that painful moment, that horrible secret, out of Picard’s dark corridors and test him with it. What could it be? In all honesty, the prospect of finding out is more than a little exciting. 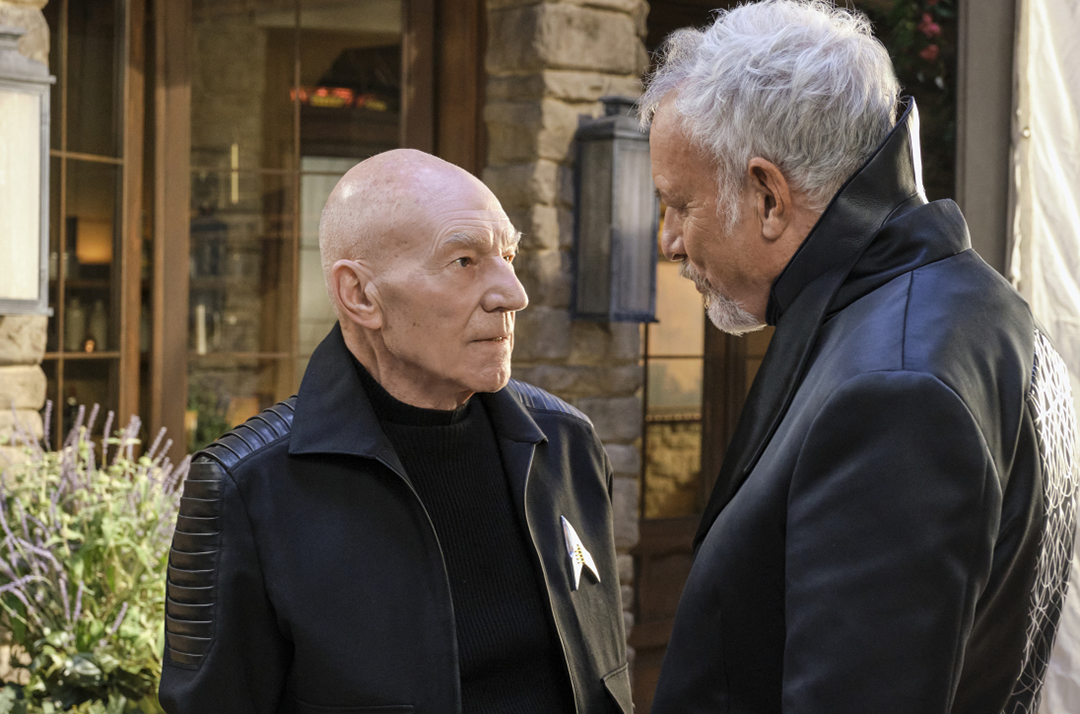 Got to say that watching an older Patrick Stewart and John de Lancie thrust and parry in a verbal dual is a lot of fun. Here we have a much older man who is very much aware that he’s older and clearly not in his prime. And then there’s Q, an entity that, for the first time, looks uncertain, lacking in confidence at moments, an occurrence that makes Picard wonder if his tormentor is starting to go mad. In fact, I found it startling that during their verbal bob and weave, Q loses his temper and backhands the man he’s tormented.

Q is a lot of things, but I found that moment very interesting, perhaps very revealing that this Q is, indeed, struggling in his own skin or shell or reality. Seeing Picard walk through his house in this changed reality, bleeding from the nose, with slaves cowering over their chores, it seemed not only an odd and unsettling scene, but somewhat chilling given Q’s behavior. And it portends some very interesting moments ahead.

But that’s the scene that was set. As the episode moves along, Picard starts to collect the pieces that could eventually help put this odd puzzle together again. Rios, Jurati, Elnor, Raffi and Seven eventually fall into his sight-lines. Seven’s the president of the Confederation, for heaven’s sake. They all come to realize they are in a different reality and play the game enough to get into each other’s path in a less-suspicious manner. 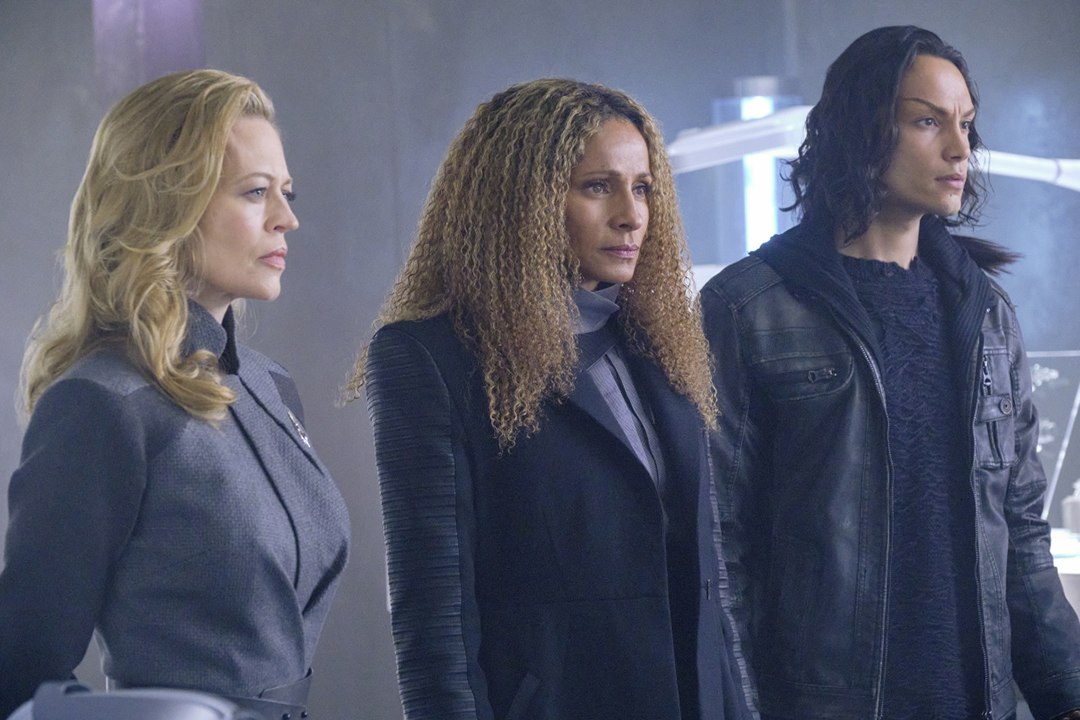 As I said last week, the chance for these characters to expand those regular characters in a very different timeline is exciting to me. Oh, the Borg Queen, not the one we saw in episode 1, but a more traditional one, shows up as well and becomes a key component. Turns out, she’s the star attraction for “Eradication Day,”  as Picard apparently had defeated the Borg as well. There’s a very real mirror universe (“Mirror, Mirror” episode, anyone?) vibe to this one.

However, in a tense moment in Jurati’s lab (she’s holding Borg Queen in stasis until she’s … eradicated), the Borg Queen dials into the change in reality, nothing that “this is not right.” And through what’s left of the collective, she pinpoints Q’s fork in the timeline, the moment that changed the real timeline to this alternate one. So, the plan is to get to Los Angeles in 2024 and try to right this wrong.

Should be very interesting to see these characters in close proximity to our own time and place, but also to discover that which Picard must make amends, do penance, for. Makes you wonder if that mystery is tied into his hesitancy to take the intimate step with Laris that he clearly wants to take, but seems unable to. On many levels, Picard has always been a closed-off personality, a willing slave to duty and the Federation. He has had the occasional interlude with women, but always with a conviction that they were subordinate to his duty, his ship, his own protective walls. I’m looking forward to maybe getting a look at what’s behind those walls. How about you? 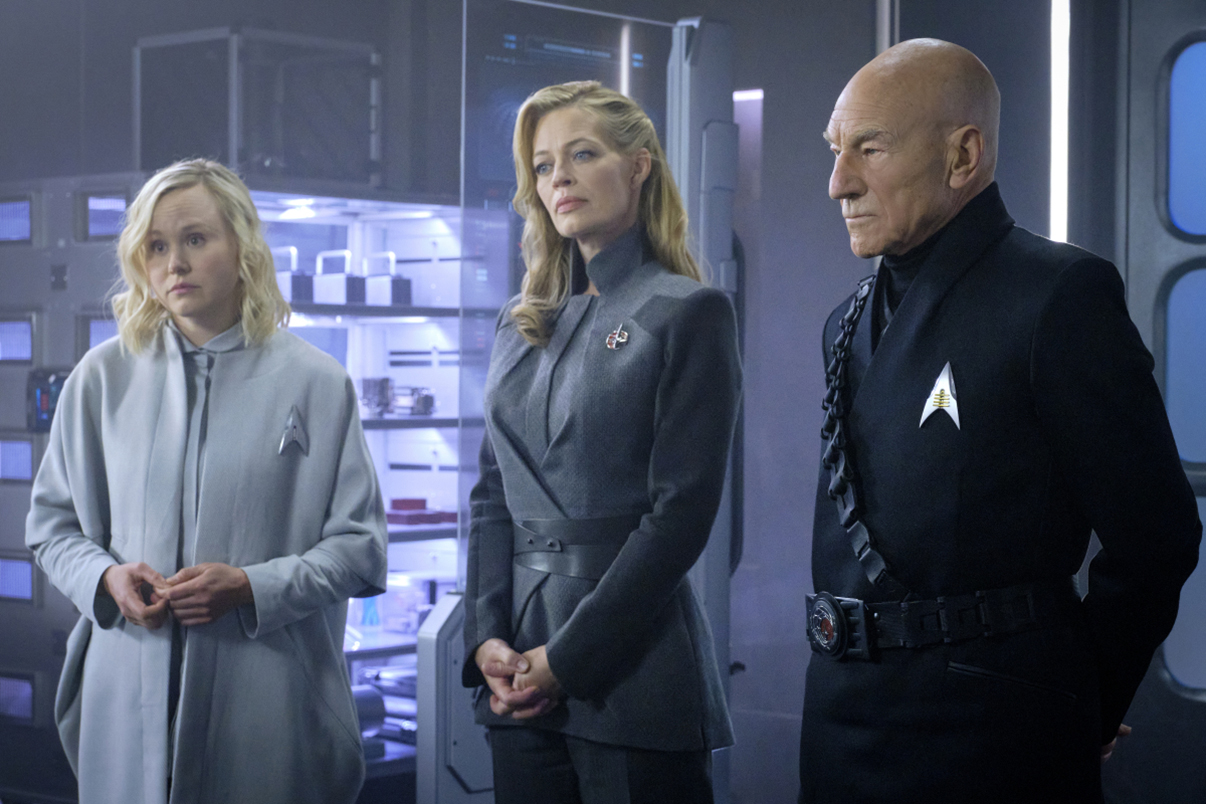 So naturally our heroes come up with an elaborate plan that’s equal parts deception, daring, science and technology. There are a few common sci-fi tropes going on in this episode – time travel, alternate realities, intricate plans to escape, etc. – but it’s fun to watch them work their way through the problem and the stress of pulling it off. Rios is still one of my favorite characters and listening to him and Jurati spar in the aftermath of their romantic break-up is fun and well-played. And yet, the affection each has for the other is still clearly on display.

So now the die is cast – the crew has to go back in time to fix this error in the timeline that Q has apparently created. The question, of course, is how and why? And with the Borg Queen in tow (that’s right, she’s on the run with them), the opportunity for some pretty dire straights is alive and well aboard the Stargazer. That is, if our erstwhile heroes can get that slingshot around the sun.

Turns out, Seven is married and before Picard or Rios can utter the word “Engage,” hubby shows up with a security team to put the whole plan in jeopardy. We shall see how our gang manages in episode 3, but I think the first two episodes of season 2 have been really enjoyable. They sucked me in quickly and efficiently and when they ended I was ready for the next episode immediately. I didn’t want to see them, I needed to see them. I needed to know the next step in this journey. And isn’t that what good Star Trek is supposed to do? Things are off to an interestingly good start.