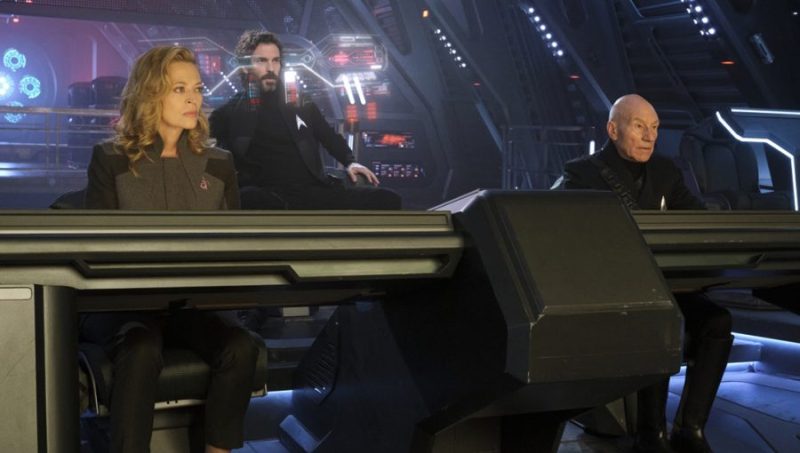 There’s always been a healthy dose of social examination within the Star Trek realm, sometimes subtle, sometimes overt and on-point. In episode 203 of Star Trek: Picard, titled “Assimilation,” our erstwhile heroes slingshot around the sun and land in 2024 Los Angeles. It’s a time that may be two years hence for you and I, but clearly still teaming with the issues we face today in our little corner of the world.

When the Borg Queen hinted that Los Angeles in 2024 was the destination our gang had to travel to in hopes of straightening out a timeline that Q had purposely splintered, the city and its issues, which are all of our issues, was a nice backdrop to the storyline we were about to jump headlong into. And quite frankly, this episode ripped the bandage off some of our most obvious social issues, something that Star Trek, when it’s really humming, hasn’t been afraid to do from time to time.

SPOILER ALERT: Just be forewarned that there will be some spoilers coming up. So be aware and be prepared. 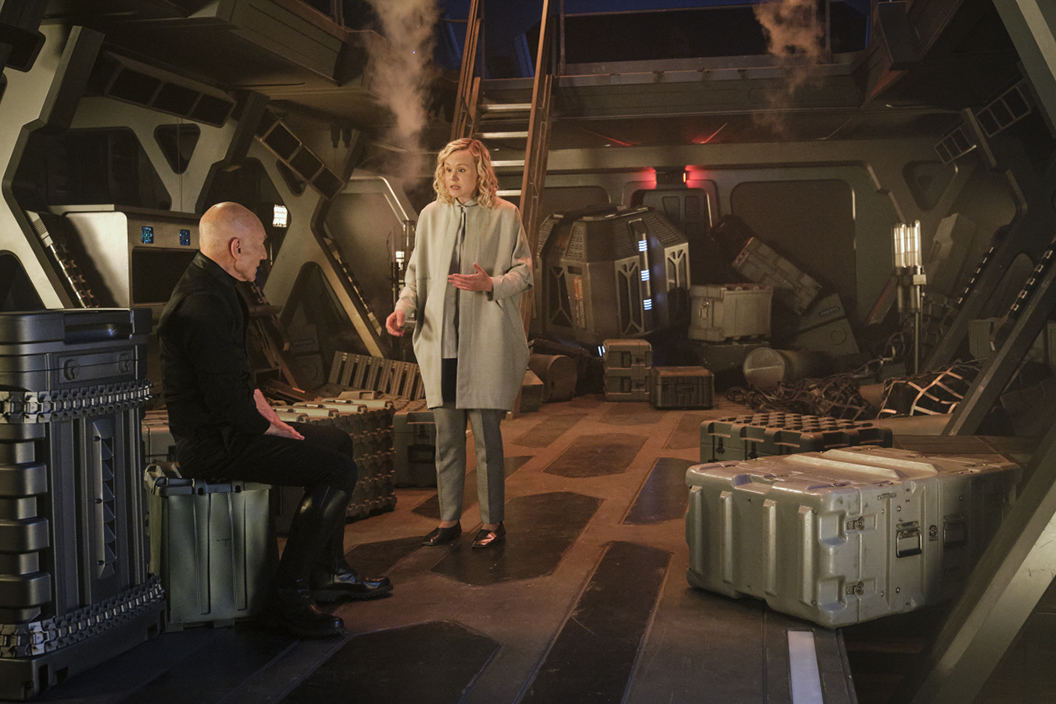 The crew of misplaced Star Fleet officers did make a successful escape from the Confederation timeline, but not before taking out some obstacles in their way, including Seven’s “husband” and a few other security forces. Along the way, Elnor is wounded severely and, sad to say, would eventually succumb to his wounds. This event sends Raffi into a rage of grief and anger, something you can tell will fuel her fire to find “the watcher” and end this nightmare.

She blames the Borg Queen, who needed the power ship’s power to help them slingshot past the sun, etc. It’s a long and winding tale that brings Raffi’s rage to a focused point – the Borg Queen, who I must say seems to be enjoying herself immensely. Annie Wersching plays the  Borg Queen with a calm malevolence that tells you even as she’s helping the cause, she’s plotting everyone’s demise and the rise of the Borg Collective once again.

Wersching does a tremendous job of putting a bit of a playful glint in the role, perhaps telling us that, in the end, she’s in complete control. From the way she speaks to her various looks, the Borg Queen in Wersching’s hand’s is a chilling character that you can’t take your eyes off of. Great casting and great work by Wersching in this role. 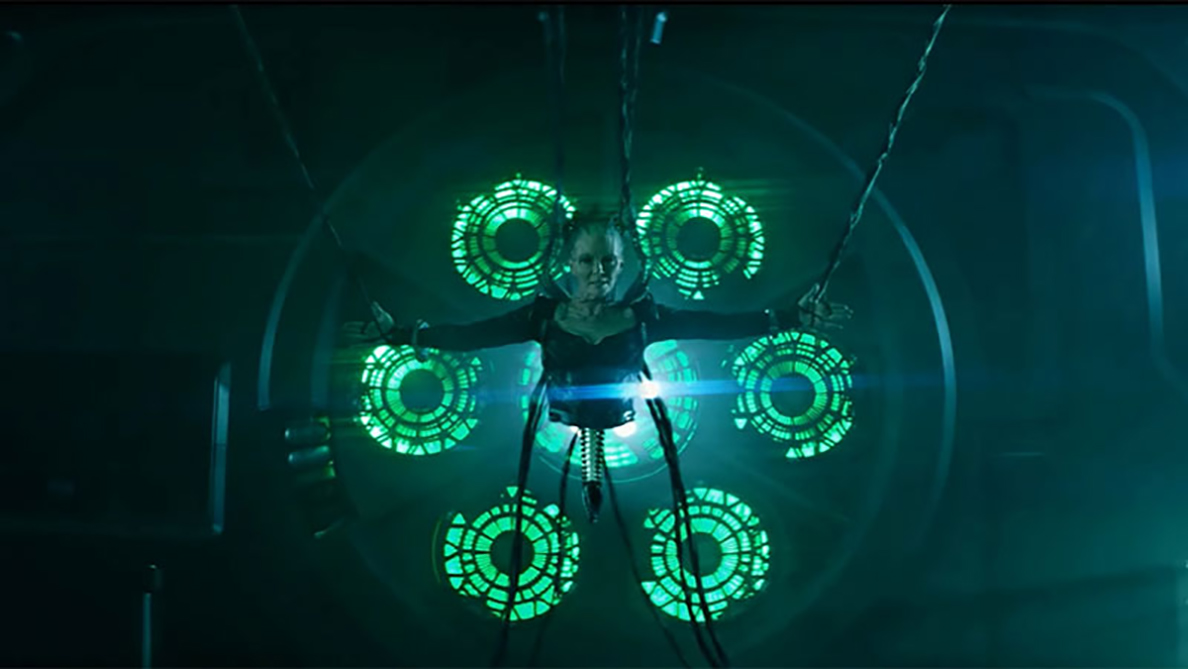 Annie Wersching as the Borg Queen in episode 203 of Star Trek: Picard

Once landed, Rios, Raffi, and Seven head into Los Angeles to try to get a fix on “The Watcher,” whom they surmise must be alien and using alien tech, something they can hone in on. And with that, we get not only a good dose of social commentary on the times, but a huge fork in the road for Rios. Raffi takes down a would-be mugger in a homeless camp (then robs him…because they need money, right) and can’t help but notice the spread of hopelessness in the shadows of wealth and plenty. Seven notes the burning forests and other environmental struggles of today and wonders how we made it out of the box we’re putting ourselves into.

The moments weren’t long, but they were prescient to our time and place now. We also get a look at the struggles of those living in this country illegally and the battles they must fight to secure a foothold in America, as well as the means by which they try to live in the shadows of a society that seems to enjoy hunting them. Yes, episode 203 of Star Trek: Picard took its lens and put it directly over some of America’s most pressing issues of today and asked a few simple questions along the way – How? Why?

While Raffi and Seven seek Rios and “The Watcher,” Cristobal Rios has fallen prey to the one thing they all were told not to do – make themselves known. The fear of further altering the timeline means they needed to keep to the shadows and keep clear of potential timeline hazards. Unfortunately for Rios, the transporter left him dangling in mid-air, followed by a painful tumble to the ground. You could practically hear his head hit the pavement – melon-like. 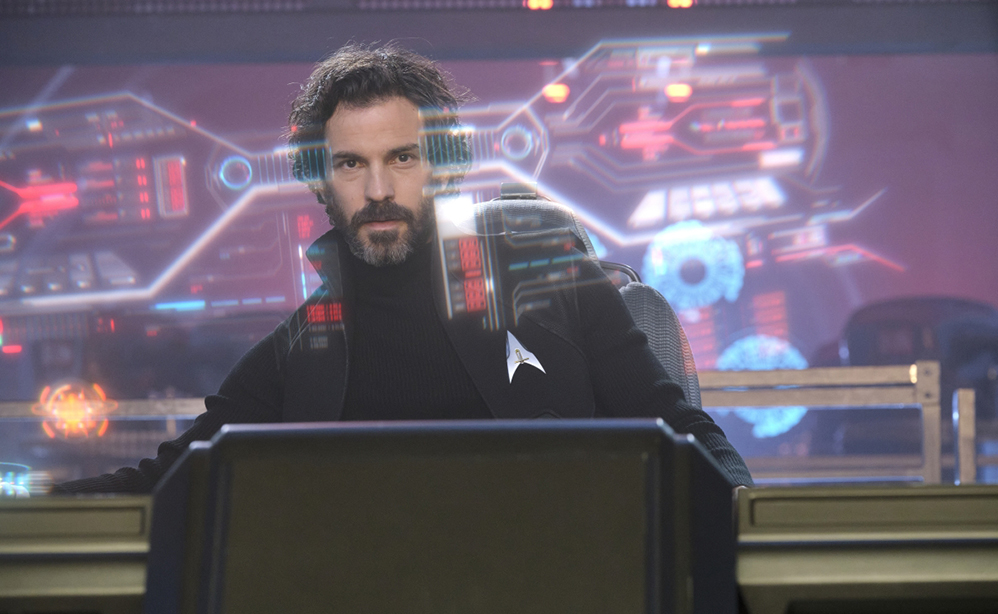 That set of circumstances led him to being found and carried to a local free clinic, a clinic that is open to those in the country illegally, but need medical attention. Rios has a concussion of sorts, his combadge is in the hands of a lovely Latina doctor’s son, and before you know it ICE is banging at the door on a raid. Needless to say, our captain, clearly intrigued by his doctor and amused by her son, makes a gallant stand as the officers make their way into the station. HIs combadge on the counter with Raffi’s voice emanating from it, Rios, sans papers or documents, is taken into custody as an illegal. Is he headed for deportation? Can Raffi and Seven connect the dots when they inevitably find his combadge?

It was interesting to me that this episode intertwined homelessness, wealthy ambivalence, environmental dangers and the illegal alien issue into the fabric of the storytelling. There’s a message there that seems to say “we are better than this” and “there’s a better way ahead.” Naturally, our time travelers know that the earth moves away from such petty and petulant attitudes about money, people and places, but seeing their reaction as they come face-to-face with 21st Century earth issues, is enlightening – and oh, so Star Trek. Glad to see the show taking up some of that rope once again. 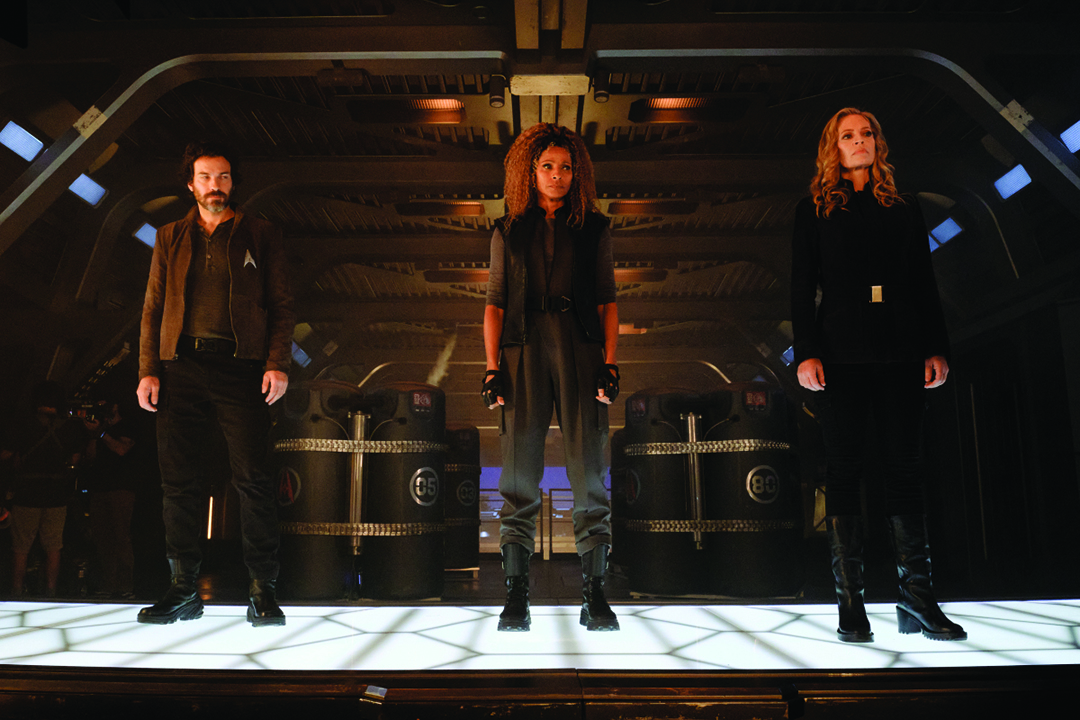 Rios, Raffi, and Seven about to head to Los Angeles to search for “The Watcher” in episode 203 of Star Trek: Picard.

While our three adventurers are off on their various treks in Los Angeles, Picard and Dr. Jurati are aboard the ship dealing with the Borg Queen. She’s consuming power as she sits in what could be described as essentially shut down mode. It’s here Jurati comes up with a plan to, essentially, mind-meld her way into the Borg Queen’s matrix and help repair her. The horrifying truth is that Picard and gang need the Queen because he’s sure she has more information that can help. But will she give it up willingly.

Jurati’s trip through the Borg Queen is both troubling and exciting as the two trade places at times, with Jurati serving as a mouthpiece for the queen (feels like there was a hint there about Picard’s past. Perhaps what Q was hinting at?), while Jurati fights to not get sucked into the collective and be lost forever. And watching it is Picard, who all too well knows the dangers that the good doctor is facing with an implacable foe. Jurati manages to extricate herself after helping fix the queen and proves to be a savvy opponent for the queen on her own. Gathering some important “Watcher” intel and demonstrating a toughness that it’s easy to forget she possesses, Jurati is formidable herself, it seems. 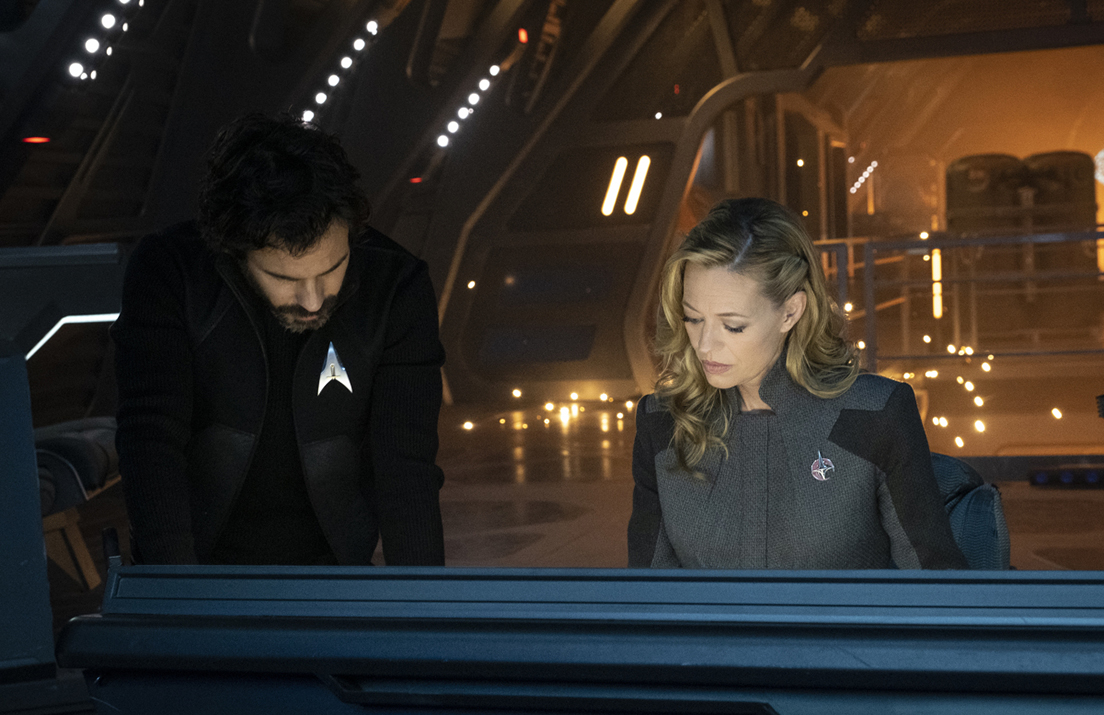 Ominously, however, the Borg Queen ends up being impressed with Jurati’s cleverness and tenacity. I don’t know if that’s a good thing or not moving forward, so the Jurati-Borg Queen relationship needs careful watching moving forward. I do like how Jurati kind of finds herself in these interesting situations where she gets a chance to shine. Allison Pill has infused her character with a toughness and intuitive strength that belies the sometimes fragile-seeming emotional state she regularly seems to let out. It’s good work and Jurati often plays key roles in making things come together at key moments. Again, her relationship with the good Queen should be interesting. You can sense, when all is said and done, there’s a showdown coming. Pill is splendid in this role

So, Rios is in the hands of immigration, Seven and Raffi are looking for signs of “the watcher” and Rios, and Jurati and Picard have survived a very up-close duel with the Borg Queen that would seem to have left them with coordinates that could lead them to their quarry. One of things that also seems to be fueling Raffi, and I wonder this too, is that if they fix the timeline, will that bring Elnor back? His death was a big shocker out of the box, and it’s a character that I find really interesting, so here’s hoping fixing the timeline does the trick. We shall see.

Season 2 is off to a delightful start. Yes, the “back in time to repair an anomaly” is a trope that sci-fi has used a lot, but it still works for me. Seeing our heroes traverse our time period, and how they view this time and us through the Federation lens is both interesting and instructive. I like it and I like where we are at after three episodes. Looking forward to more.