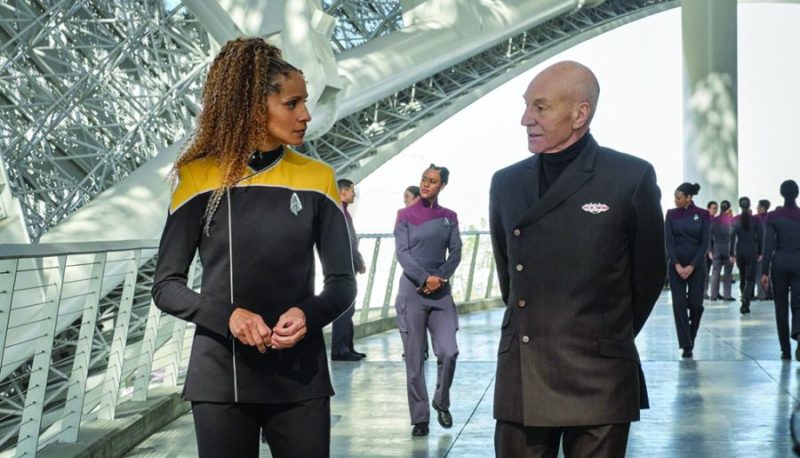 Has it really been two years since Admiral Jean-Luc Picard and a host of allies, both old and new, redefined synthetic life within Star Fleet and, of course, saved the galaxy in the process? The answer to that is…affirmative.

After two years, Star Trek: Picard is back and takes up after what appears to be a substantial length of time in the aftermath of all that had transpired in season 1. Jean-Luc is back at Chateau Picard, creating fine wines, while Soji, Narek, Raffi, Rios, Elnor, Seven of Nine and Laris have moved on to different areas and activities. Fortunately, we know that circumstances around Picard will require us to not only reunite with our crew from season 1, but also enjoy visits from some new, yet familiar faces.

One of the things I so enjoyed about season 1 was that there was a healthy and proportionate amount of fan service dialed into a storyline that took us on quite the emotional ride. It was never gratuitous, never over-the-top, but a familiar and easy ride down memory lane within the context of a story that was, at times, wild and crazy. I appreciate the fan service that season 1 provided, but moreso I appreciate the way it was done. 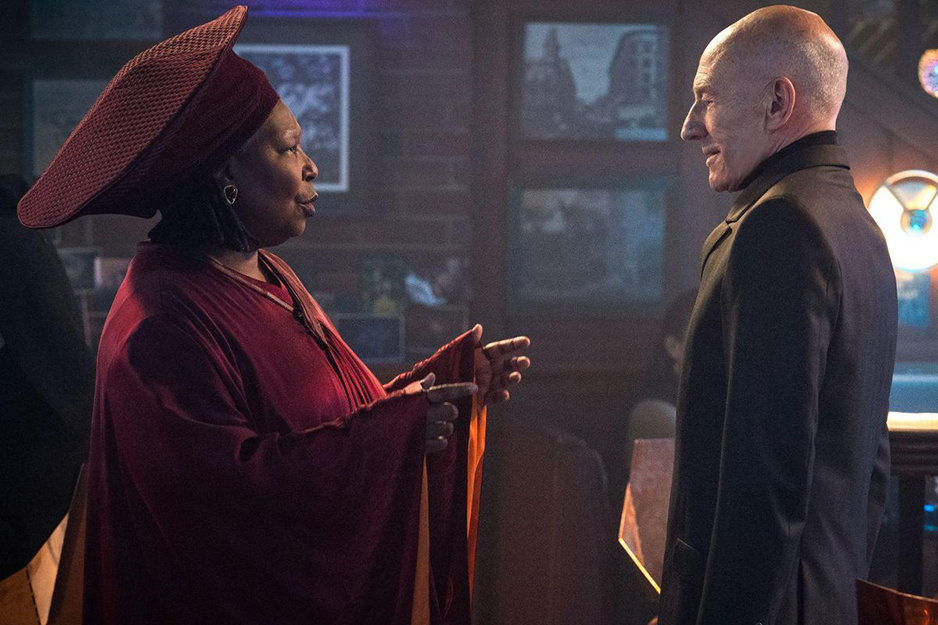 Given the first episode of season 2, it looks like we will get to see more. It’s well known that Whoopi Goldberg will reprise her role as Guinan and John De Lancie returns as Q, and that the Borg queen (Annie Wersching) has been teased. In episode 1, we get the first two and a hint about what this new season will be. It looks, dear friends, as those Q’s continual testing of Picard, and the human species, isn’t quite done and our pixie-like entity has chosen some old favorites to torment Picard with – the Borg and an alternate reality.

An anomaly has formed in a part of the quadrant and Captain Rios, now captain of the Stargazer, has come upon it. As they discover a bevy of voices emanating from the rift, they also discover that those voices are calling for someone specific. You guessed it – Picard.

I enjoyed this episode’s voyage to our characters from season 1. Raffi is back in a Star Fleet uniform, Seven-of-Nine is helping those who need it, Soji is an envoy for the synthetics, and even Laris (I adore Orla Brady since discovering her talents on Into the Badlands) returns in a very interesting, intimate moment with Jean-Luc. Her husband Zhaban has died and that gives us a little window into how long it has been since the events that ended season 1. Laris is listed as a series regular for season 2. So maybe Jean-Luc will get to explore those feelings and, perhaps, have a break-through. 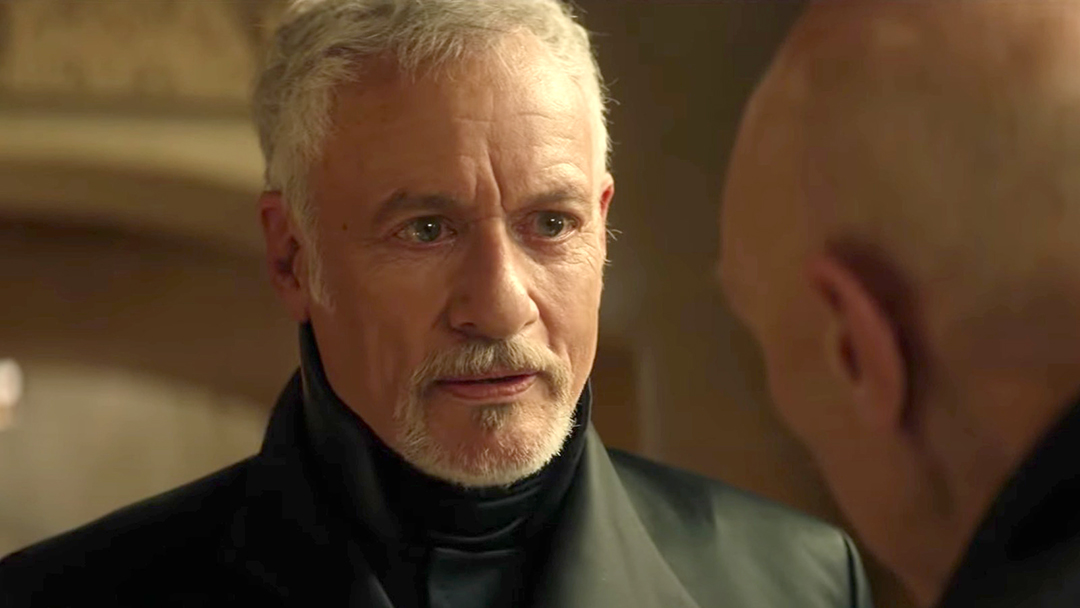 John de Lancie is back as Q in episode 1 of the second season of Star Trek: Picard.

Clearly, Laris and Picard have grown close in the stillness of loneliness. Still, I didn’t see that coming, but it was an interesting scene with delightfully nuanced interplay. Once again, we see Picard’s walls come into play and Laris simply stating “that’s you.” It was a nice walk with our characters to see what they’ve been doing. Agnes and Rios apparently had a little fling and she seems to be struggling to come to terns with her own relationship issues. “I’m half in the bag” she tells Soji after getting the call to join Rios to take a look at this new anomaly.

It was fun to have the band back together after such a lengthy break and the appearance of Guinan early on got the episode a little more elevation. And again, that’s something Star Trek: Picard continues to do well – create moments that lift the show in an exciting, yet comfortable way. And yet, there’s the conflict that we know is coming.

Picard joins Rios, Agnes and Seven on the Stargazer to answer the call from the anomaly. That’s when things get really interesting as a ship comes through the gap in the anomaly – a Borg ship, seven confidently announces. You get the first inkling that things are going sideways right here as it’s not a Borg Cube, but a ship that, well, looks like a ship. And when a Borg Queen beams aboard the ship and announces it wants peace… and then power, things start to swing out of control. 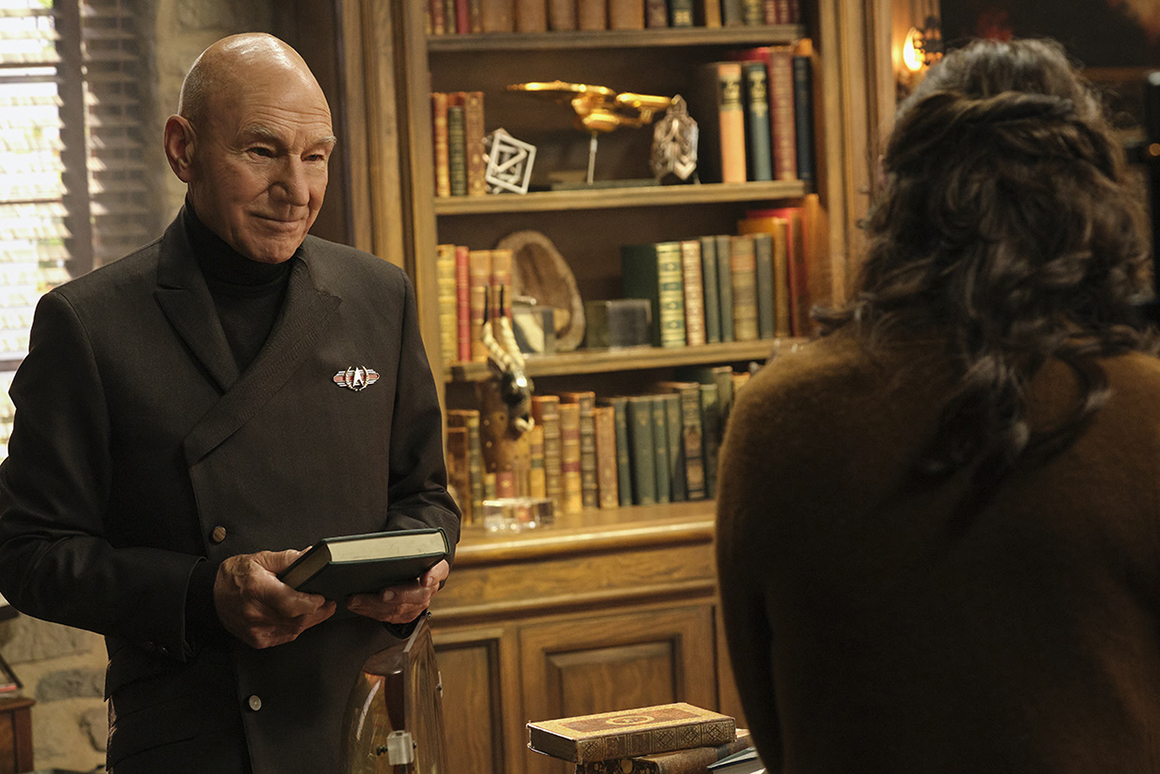 Season 2 of Star Trek: Picard has begun on Paramount+

It looks like the Stargazer is doomed and all aboard are lost as an explosion rocks the area, but things have changed. Picard is not dead, but alive and in what looks like his chateau, though with some changes. In fact, the combadge on his clothing is different now, as it the make-up of his home. It’s then, as he silently asks himself what’s going on, we get our first Q sighting. De Lancie’s Q is such a masterpiece of arrogance, curiosity and fun. De Lancie has always played this character with a mischievous delight and seeing him stroll in once again and immediately take up that vibe was a shining moment.

Q makes it clear that the testing he’d so often tormented Picard and his crew with for all those years was not at all finished. There is, he hinted, the end game yet to get to. And from there and scenes to come, it would seem that an alternate reality is where the action will take place for much of season 2. At one point, Picard notes that to fix this present, they have to go back and fix the past. Sounds wonderfully Star Trek, doesn’t it? And doing it all within a totalitarian society? Oh, that’s got so much potential. 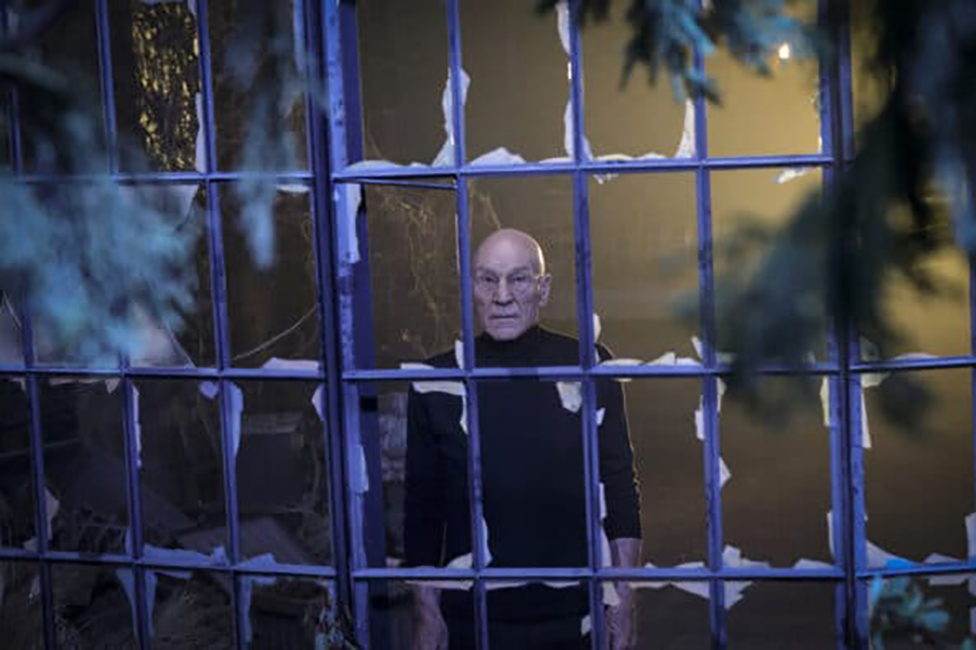 With the arrival of Q, Jean-Luc Picard and friends will work through a new timeline in a totalitarian society to fix something from the past.

One of the interesting things about the first episode was that it would have been easy to forget the vibe season 1 delivered as it found its footing and raced its conclusion. Season 2 opened with an episode I thought found the sweet spot immediately. All those joys I’d experience in season 1 were quickly renewed in the first episode of season 1 and I, for one, love the whole alternate reality trope. I think it will give the show a chance to really get out there a bit and for these characters, both new and old, to play their parts in different ways. That just strikes me as potential-filled fun.

And with that, season 2 of Star Trek: Picard on Paramount+ has begun. I thought episode 1 was a very nice and comfortable handcuff to the end of season 1. And the prospects of dealing with Q and this new society offer plenty of fertile ground. Honestly, this episode worked for me on many levels and I welcome this show back with joy and anticipation. I admit, my expectations have risen, so we’ll see if the show rises as well.