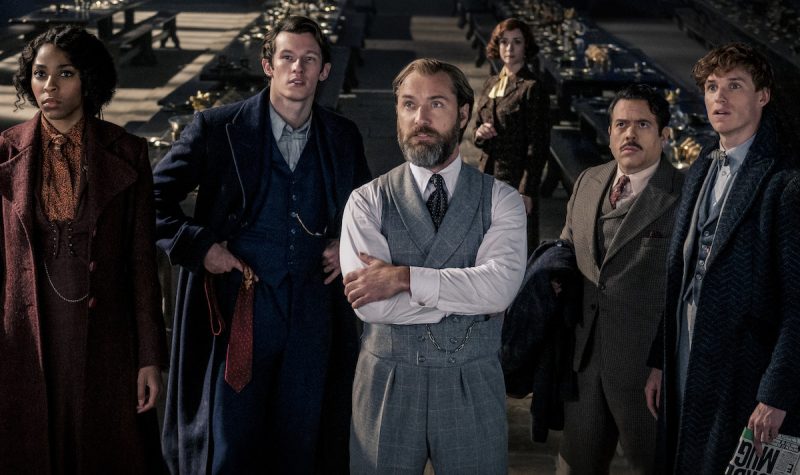 As we reach the 3rd film in the Fantastic Beasts franchise, viewers are ready for things to start moving forward and see some tieing together of all the various thread points that have been going on up until now. The current speculation is that the franchise will have a total of 5 films before it is finished. Not only that but the change in actors for Grindelwald has left some viewers unsure if they want to see the film after that change. Check out our review below, and warning spoilers ahead.

Professor Albus Dumbledore (Jude Law) knows the powerful Dark wizard Gellert Grindelwald (Mads Mikkelsen) is moving to seize control of the wizarding world. Unable to stop him alone, he entrusts Magizoologist Newt Scamander (Eddie Redmayne) to lead an intrepid team of wizards, witches and one brave Muggle baker on a dangerous mission, where they encounter old and new beasts and clash with Grindelwald’s growing legion of followers. But with the stakes so high, how long can Dumbledore remain on the sidelines?

As the world deals with Grindelwald a vote is coming up for the new leader of the magical world. Grindelwald has decided he will insert himself into politics and those who support him are clearly everywhere. This leads to some deadly confrontations throughout the film that even Dumbledore hadn’t expected. As powerful as we were lead to believe Dumbledore was, we haven’t had the chance to really see that and understand that. This film did peel through some of those layers, but I do feel like there is more to be revealed.

Let’s talk bad guys for a moment. The situation with Depp as Grindelwald is complicated and we were bummed that he was pulled off the film but Mads Mikkelsen feels like a better villain and actor for the role. The parts that were missing in the emotional relationship between Dumbledore and Grindelwald were finally visible in this film and we got to understand the two a little better. You can make parallels to the political landscape of today from the film, which makes it timely, but we will save that for the non-film pendants.

The film manages to also stay true to its “Fantastic Beasts” name as we get to see all sorts of new beasts and creatures that play an important role in the magical world and the fight to stop Grindlewald. Even a comedic scene felt like the magic we came to know and love from Harry Potter had returned as Newt and his brother found themselves in a bad situation. The audience enjoyed it as well which for a film that is otherwise bleak, was a welcomed interjection.

The film still suffers from all the story threads of the previous two films and it doesn’t resolve all of them either. Most of the main and important ones are addressed, including Credence’s true identity. It was also nice to see Mr. Kawalski getting a larger presence and things to do in this film which helped to balance out the more complex magical world. All in all, it was the better of the Fantastic Beast films to date but doesn’t rise yet to some of the best Harry Potter films of that franchise. Yet, it’s still worth going to see with a perfect mix of magical beasts, magical antics, and a story with some heart.